Marseille came into this game having lost in their UEFA Champions League opening game against Olympiacos. Therefore, they had to try and turn things around in this game to avoid losing two games on the bounce. In the league, they had won their previous game and drawn their other two, indicating that they still have to find their optimum team and way of competing. They will play Manchester City next so it would be encouraging for them to show signs of improvement ahead of that clash.

Lorient are new in Ligue 1 this year and now sit in 17th place. They have won, drawn, and lost their previous three games, which gives mixed emotions. Even though they competed well against Marseille in this match, they need to start earning points now to avoid staying in the lower parts of the table for too long.

The game ended in a 0-1 win for away side Marseille, through a goal via a freekick. Lorient were brave in this game as they showed ambition to press high and be intense against Marseille. Their opponents had most of the possession, but most of this was sterile as Marseille did not create many chances. Lorient had less of the ball but had more chances, showing their effectiveness on the ball. 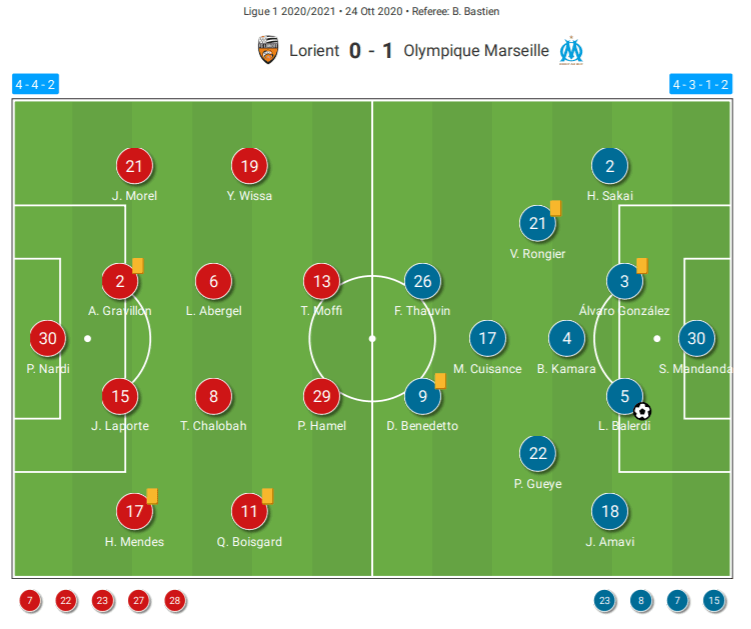 Lorient started with a 4-4-2, with Terem Moffi and Pierre-Yves Hamel leading the attack. The two in midfield were Laurent Abergel and Trevoh Chalobah, with Yoane Wissa and Quentin Boisgard to their sides. Then, the back four consisted of Houboulang Mendes, Julien Laporte, Andrew Gravillon, and Jérémy Morel.

On the other hand, Marseille went with a 4-3-1-2. The attack was made up with Darío Benedetto, Florian Thauvin, and Michaël Cuisance as attacking midfielders. The more defensive midfielders were Pape Gueye, Boubacar Kamara, and Valentin Rongier. Lastly, the full-backs were Jordan Amavi and Hiroki Sakai, with the centre-backs being Leonardo Balerdi and Álvaro González.

With Marseille having a 4-3-1-2 formation which encourages play through the middle, Lorient knew that Marseille would look to build-up from behind. Since Lorient were also the inferior team and less technically gifted, if they press high, they will have more chances of recovering the ball high. The advantage of this being that with few touches and passes, they could get a shot and create danger.

The first step of their pressure was to force one of the centre-backs to only have a passing option on the wing. This is to restrict his options and so he cannot pass the ball to the other centre-back, which opens up more passing opportunities.

Once the centre-back is forced to go to one side, that is when Lorient press intensely and man-mark the players who come to help. As seen in the image below, the right-sided striker is marking the left centre-back and the pass to the goalkeeper at the same time.

This leaves the left-back in possession with no close passing options. The only option he has is a pass to the centre-back, who would have to clear it or risk a pass to the goalkeeper. This pass would not be easy as he is being intensely marked and the Lorient striker is standing in between. 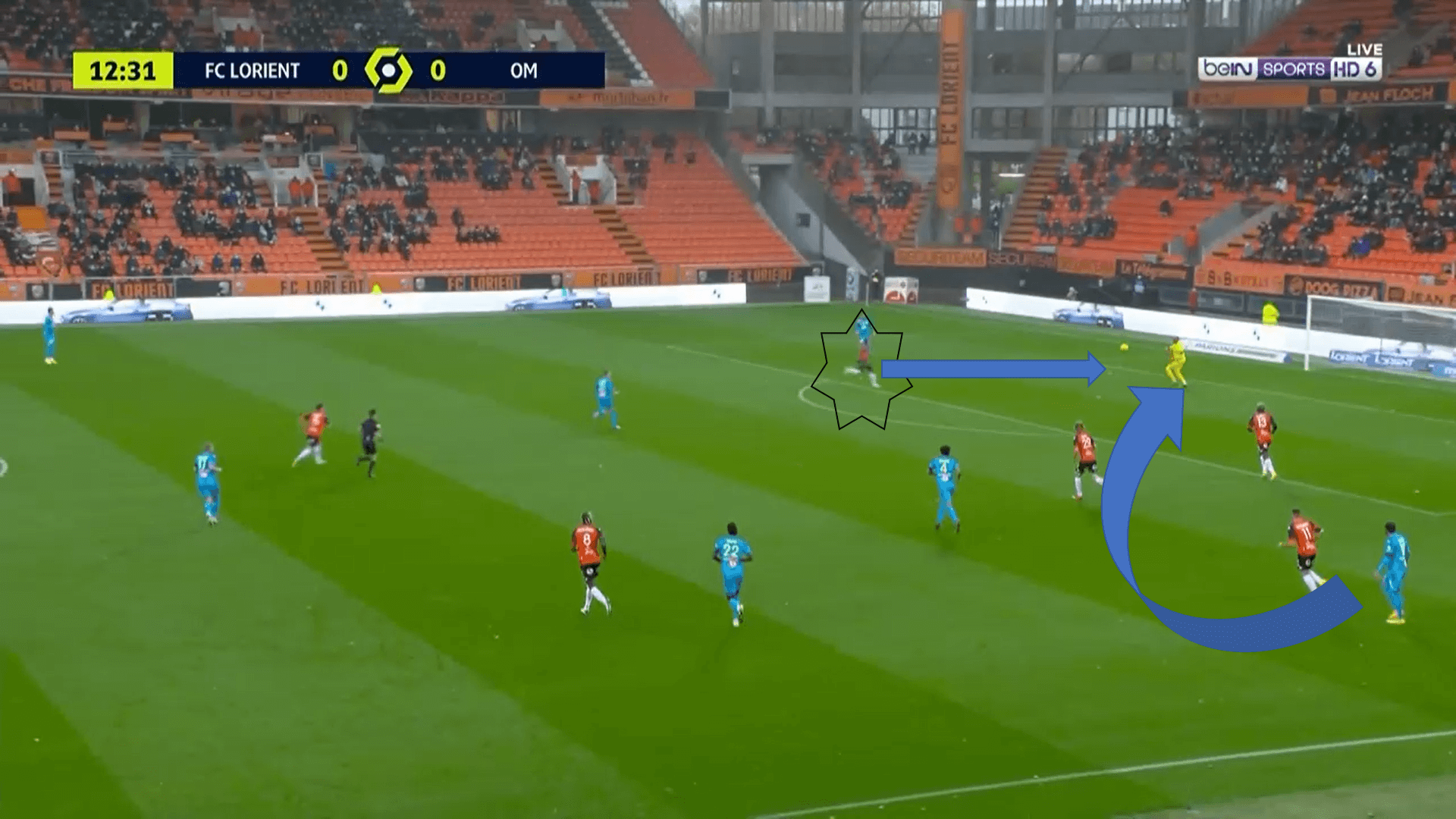 However, if he does make the pass, the opposite winger who was observing the situation would have to sprint to the goalkeeper, as shown in the image below, to not give him time to control and play out. Otherwise, the goalkeeper could easily play out where there are more Marseille players on the other side. 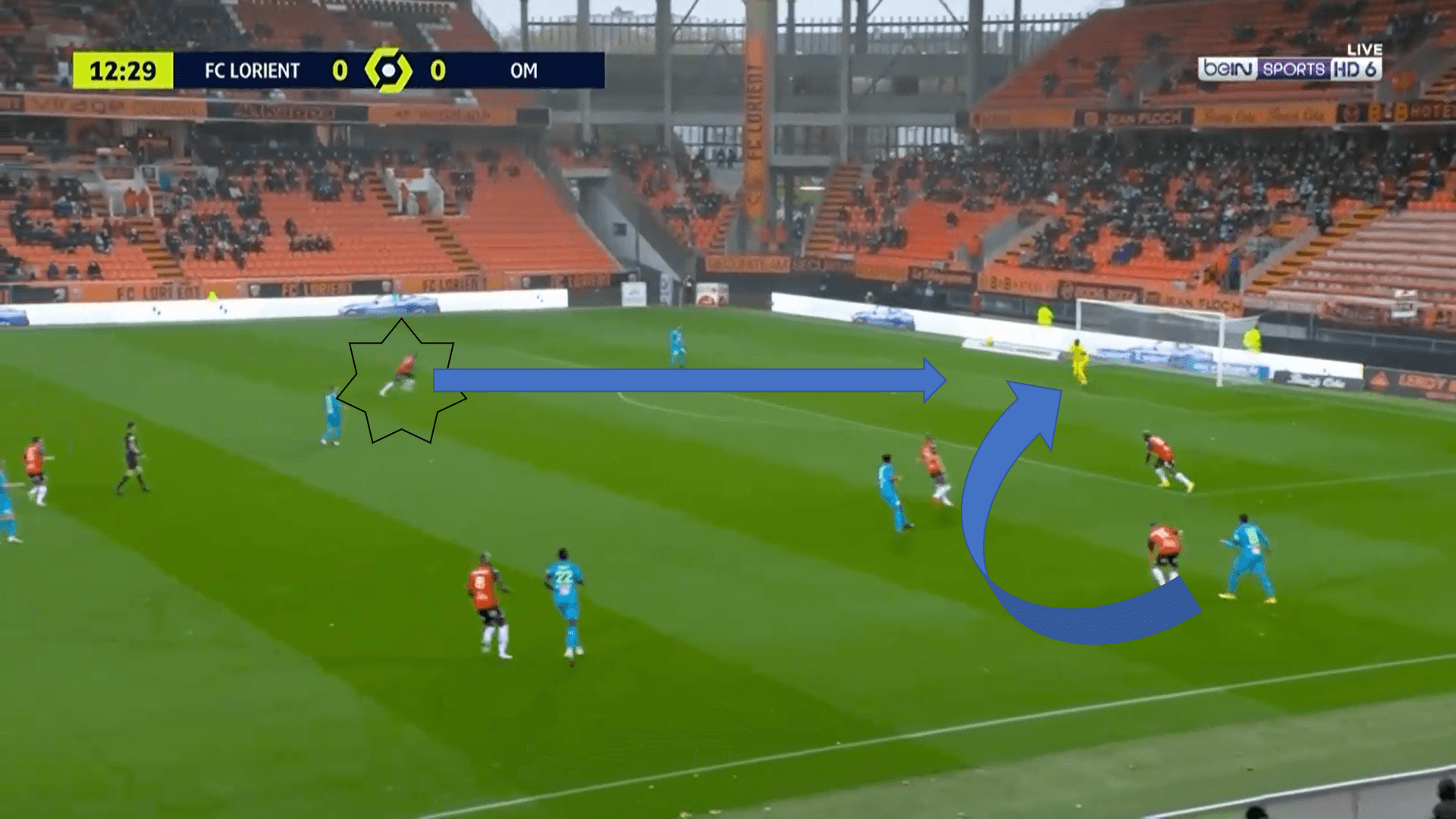 Overall, this pressure was effective because they recovered the ball a couple of times and from there, could quickly create danger.

Lorient do not generally rely on short build-up from the back in their plays. Their centre-backs like to make long balls to the strikers. This is why Marseille did not press that high, because making a long ball can be easily done and if it is done while you are pressing, it leaves a gap between those that are pressing and the rest of the teammates.

Marseille generally held their attacking line at a medium-high block and waited for the centre-backs to make the long ball. Once in a while, a midfielder would drop down a bit to receive but he would be followed by a Marseille midfielder the whole time. We can see in the example below, how there are two Marseille midfielders ready just in case any Lorient midfielder decides to go help. 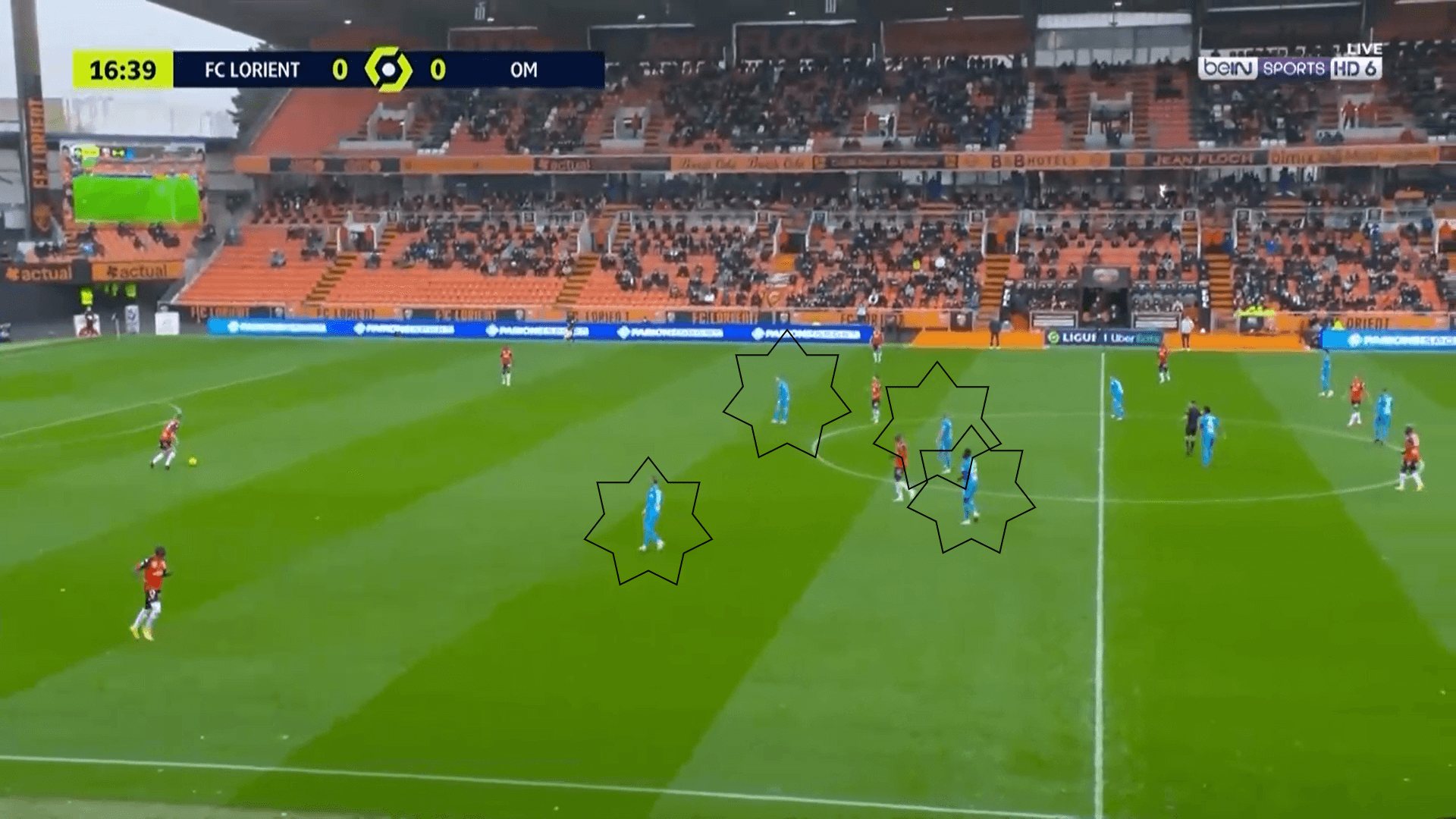 However, when Marseille did press high, it was easy for Lorient because the full-backs were always open. This is due to Marseille having no wingers, which gave the Lorient defence an easy way out of the pressure.

This is seen in the image below. Essentially, this would make their pressure useless and mean that now they would have to run back and defend, tiring the team for no reason. 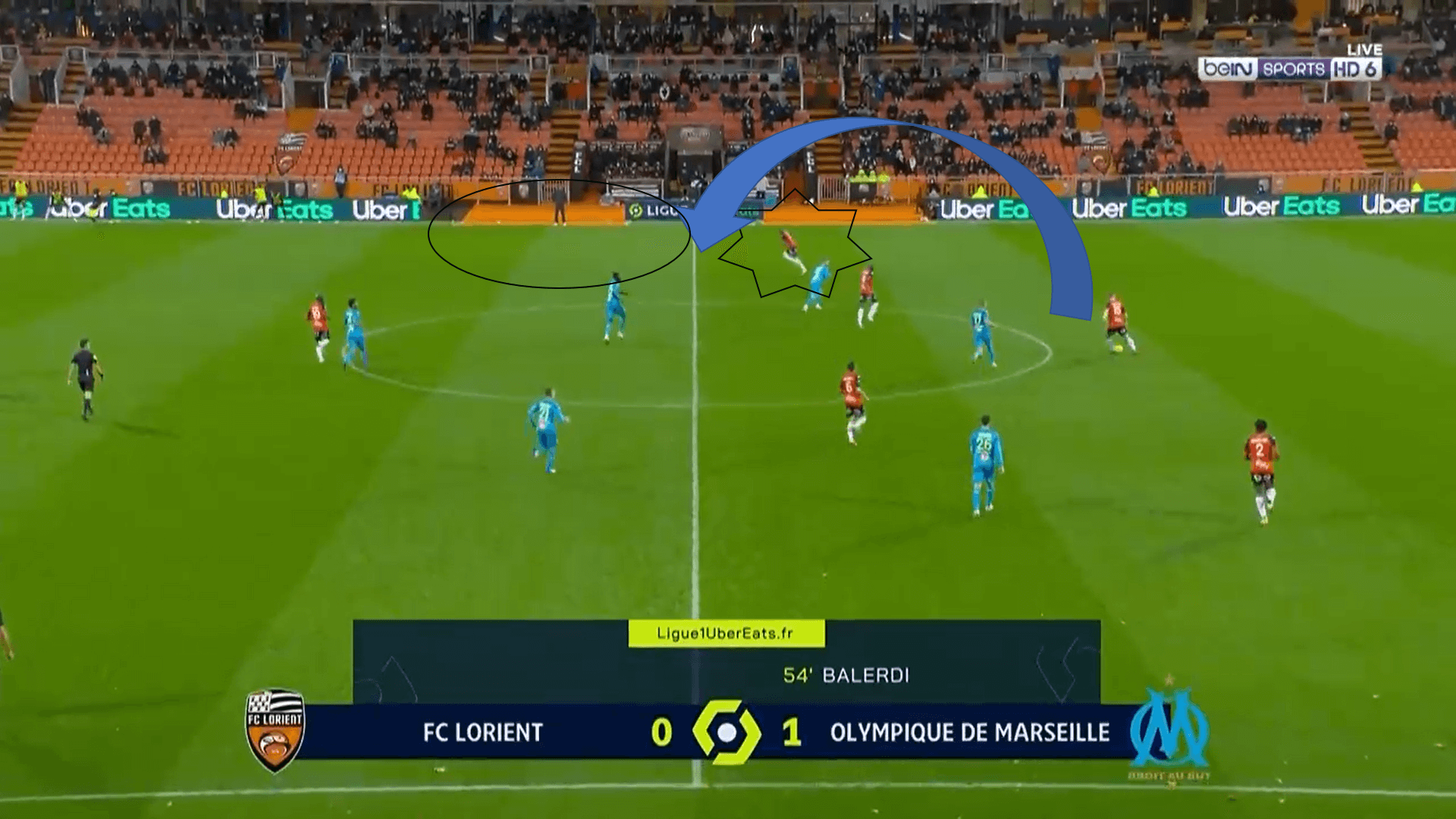 The typical long ball that Lorient would make was a through ball for the strikers in behind the Marseille defence. Since there are two strikers, the two centre-backs would be on them. Thus, they would make one striker drop down a bit as if he was going to receive the ball. This would take the centre-back with him and create space.

Then, as seen below, the other striker would go into this space and ask for the ball. 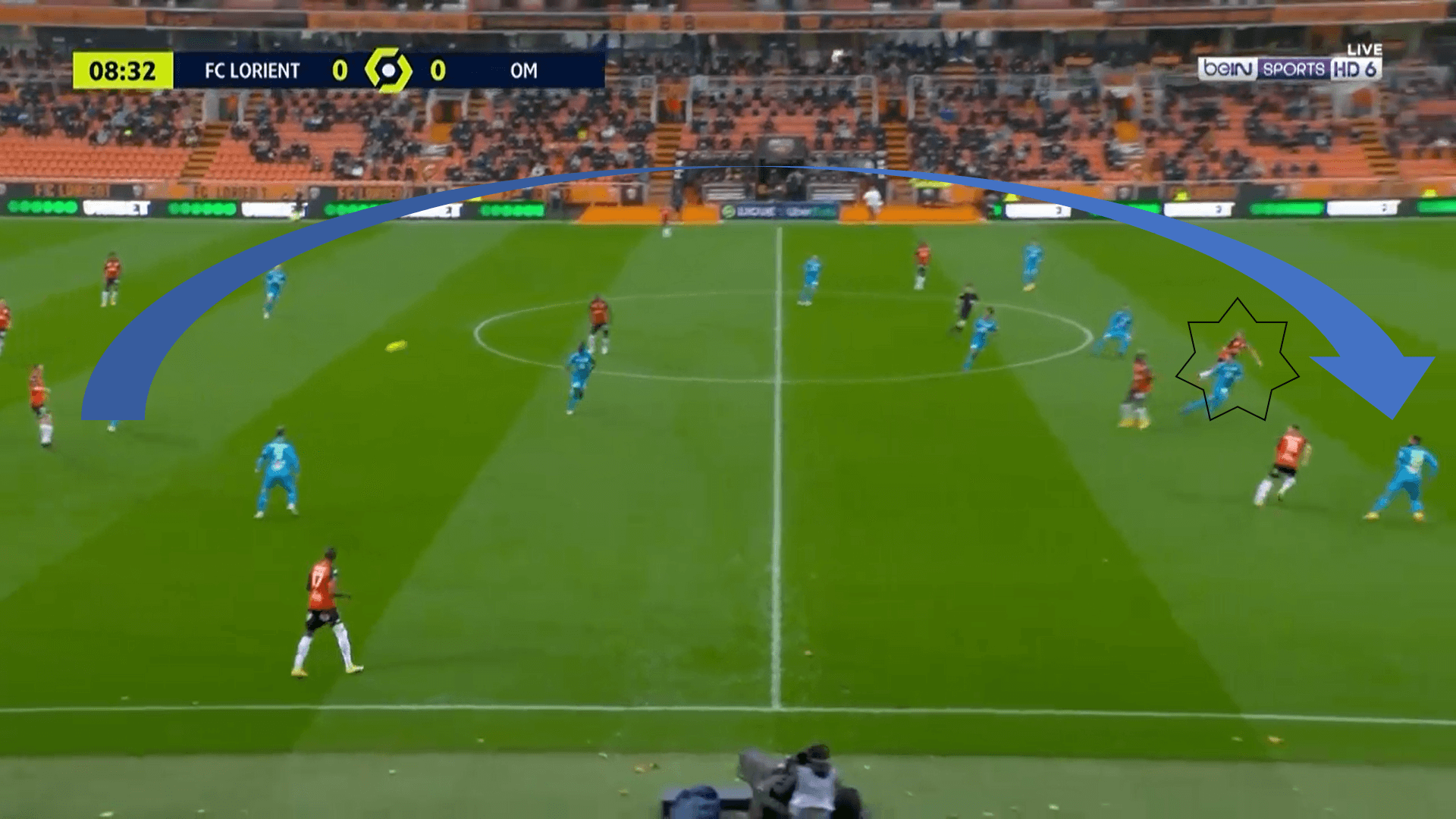 Marseille had different ways of creating space and chances in the attack. These varied from playing through the middle to playing on the wing, as they could do both.

The first way they looked for chances was by creating overloads through the middle. In a 4-3-1-2 formation, there are four players in the middle, along with the two strikers who can also play in this area. This means that there are many passing options in the middle and they can make quick passes and interactions to get past Lorient.

In the example below, there are four Marseille players playing in the middle, compared to Lorient’s two players, meaning that playing around them is easy. Seeing as Lorient only had two midfielders in their 4-4-2, it was not complicated for Marseille to play through them sometimes. 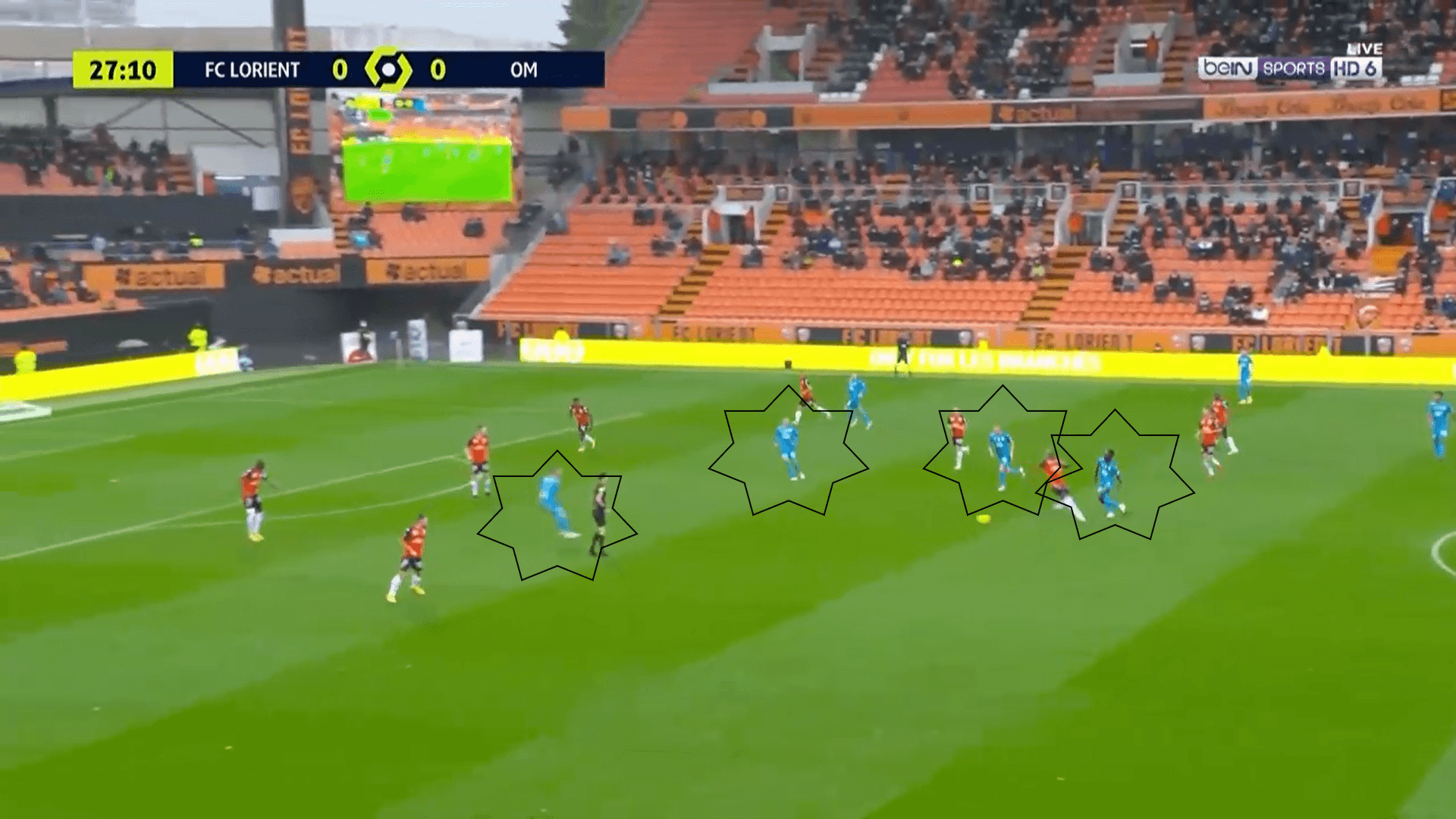 When a team plays a 4-3-1-2 formation, you expect them to always play through the middle because they have no wingers. This is false because it gives a chance for the Marseille full-backs to surprise the opponent. Since all of the play is concentrated in the middle, this attracts the opponents to the middle and opens up space in the wings for the full-backs.

The image below is a perfect example. The Marseille striker drops down to receive the ball and this attracts the Lorient right-back to him. At the same time, the Marseille left-back is making a run in behind as he has all the space ahead of him.

This occurred because the right-back was expecting Marseille to play through the middle, but they surprised Lorient at this moment. 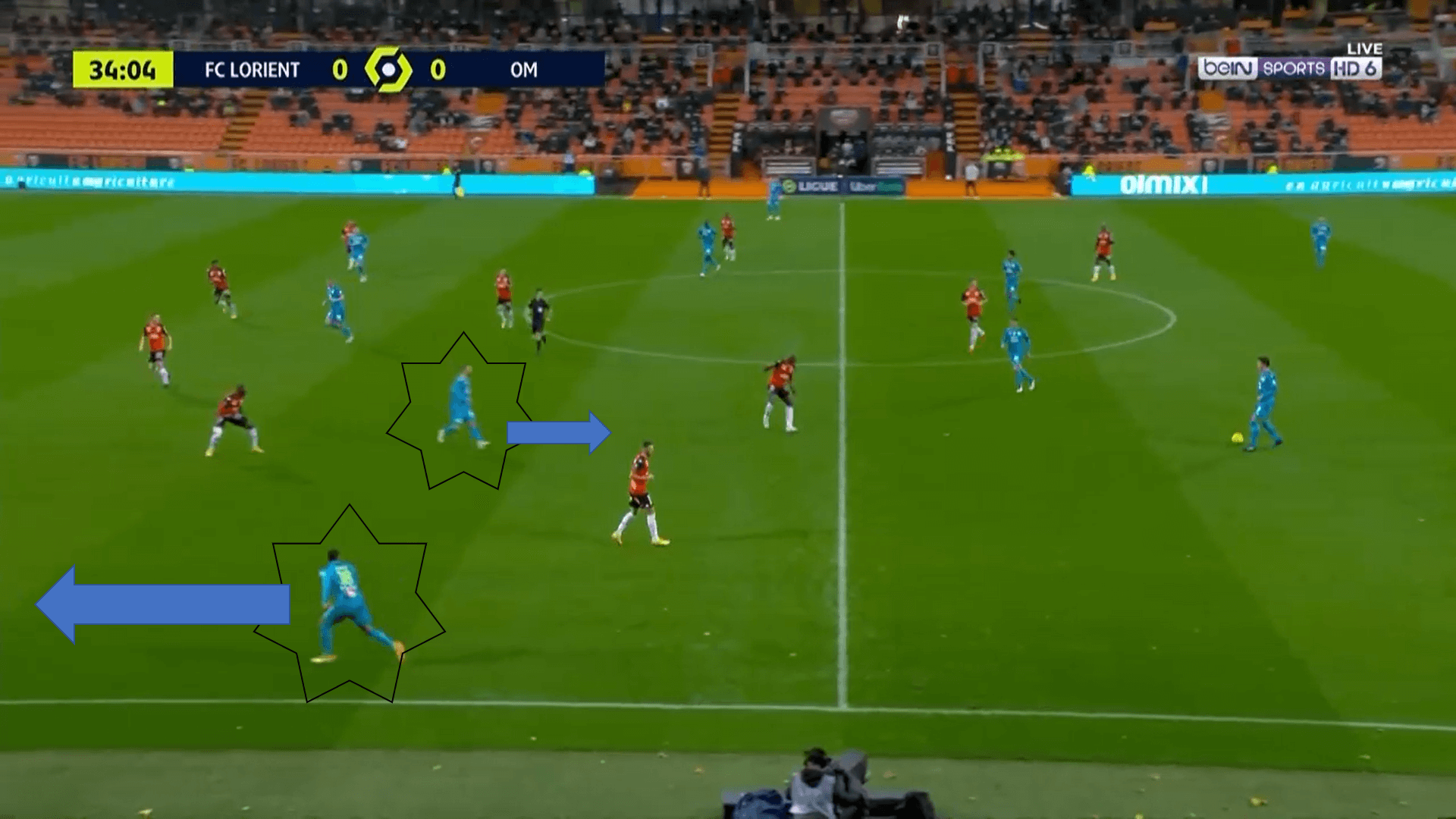 Michaël Cuisance was the attacking midfielder for Marseille. This gave him the freedom to go to either side depending on where he could help and create superiorities. This free movement made him a great receiver of passes through the middle.

Due to him running into positions in between Lorient’s midfield and defensive line, he created surprise in Lorient’s team by receiving these passes. Mixed with Álvaro González’s excellent passing (86% pass success rate in the match), it allowed Cuisance to then turn around and face the goal.

In the image below, we see how Cuisance is moving into an open area unmarked and when he receives the ball, he has time to turn around and find a pass. 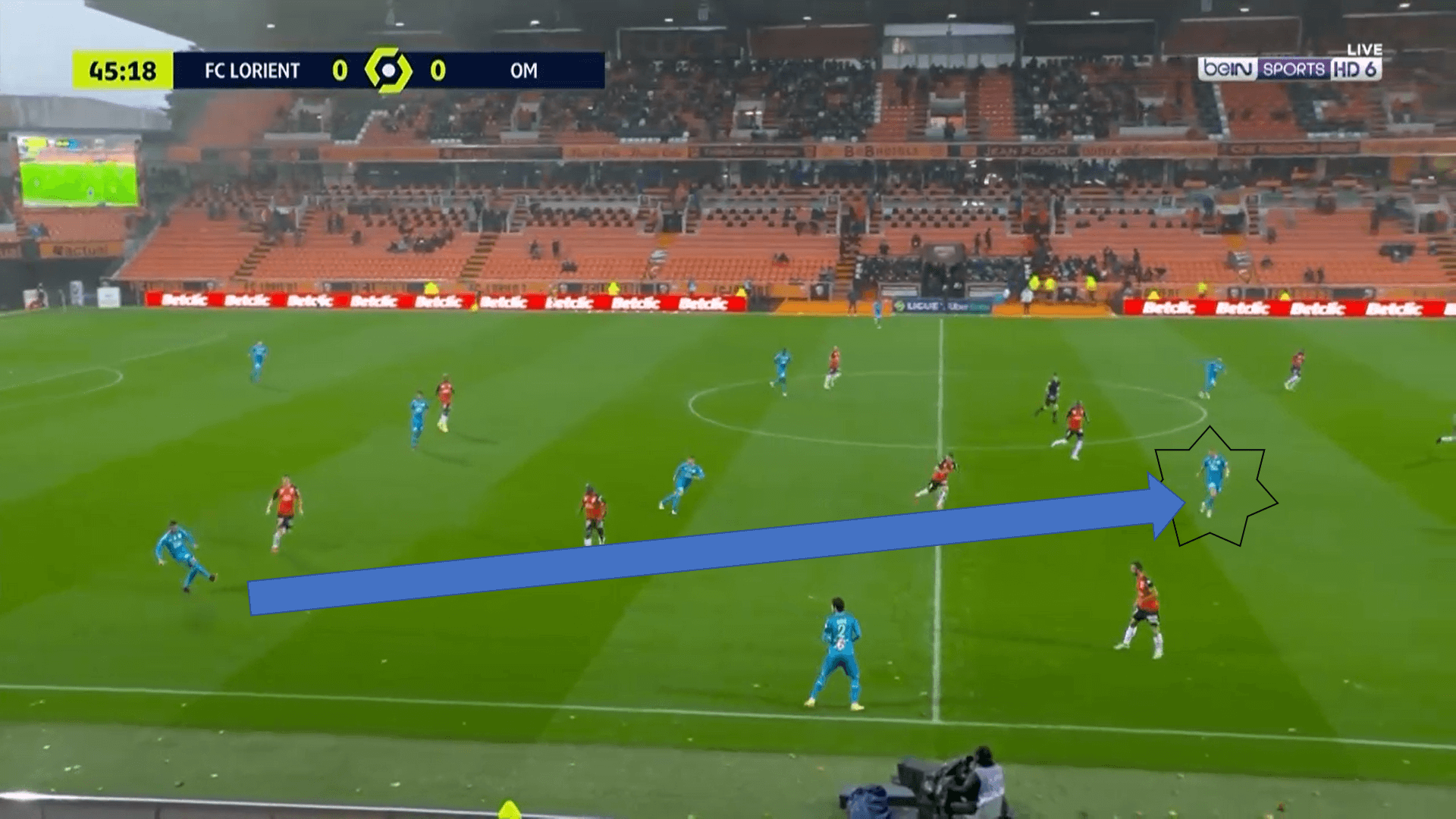 At the same time, Lorient also found ways to create space and danger. These mainly were in the wings where they were more players. 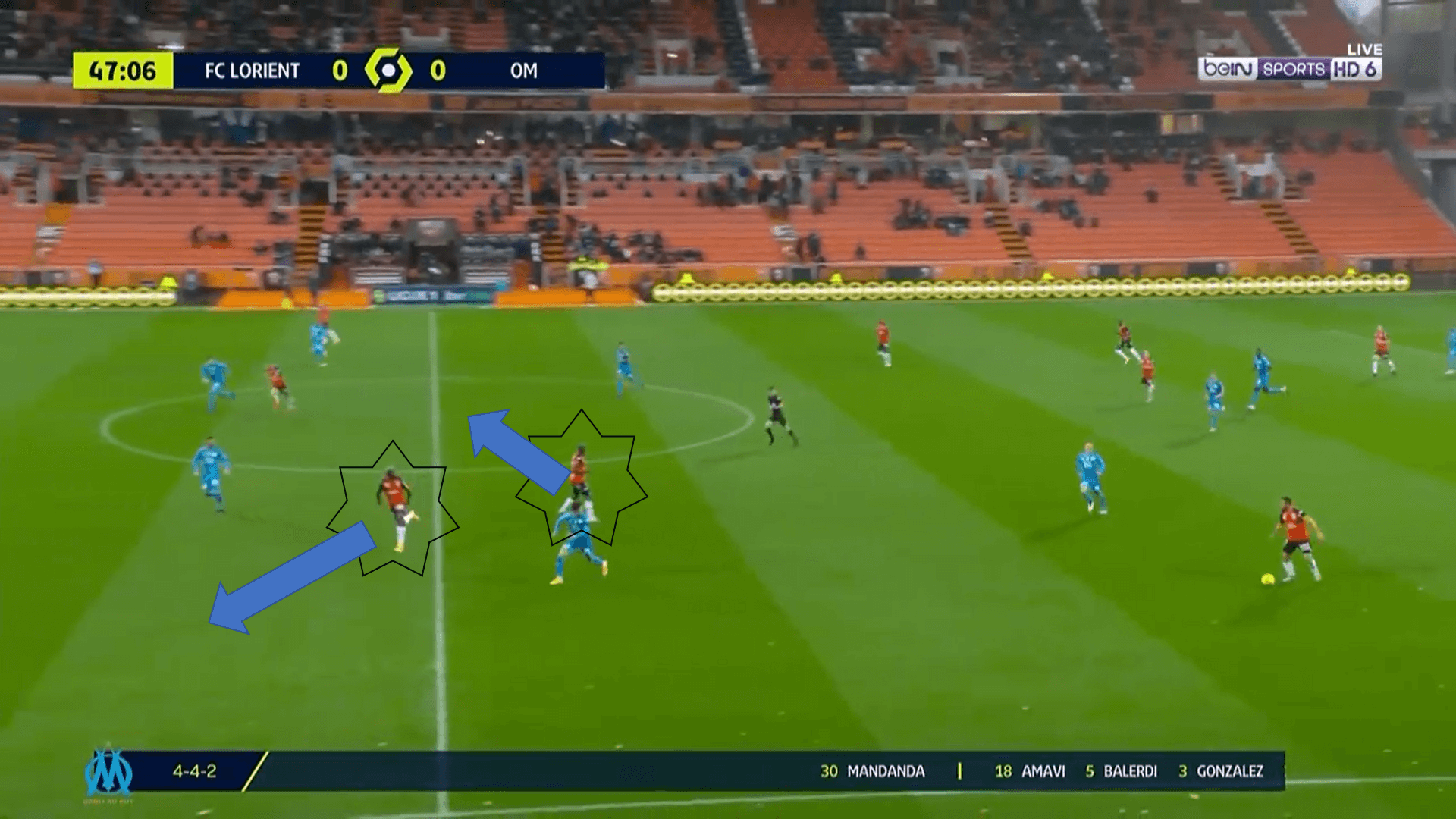 The previous image showed the attackers switching positions and it made both of them be open. A pass was made to the winger into the middle and in his first touch, he made a pass in behind for the striker. This left the striker with a lot of space to run into. 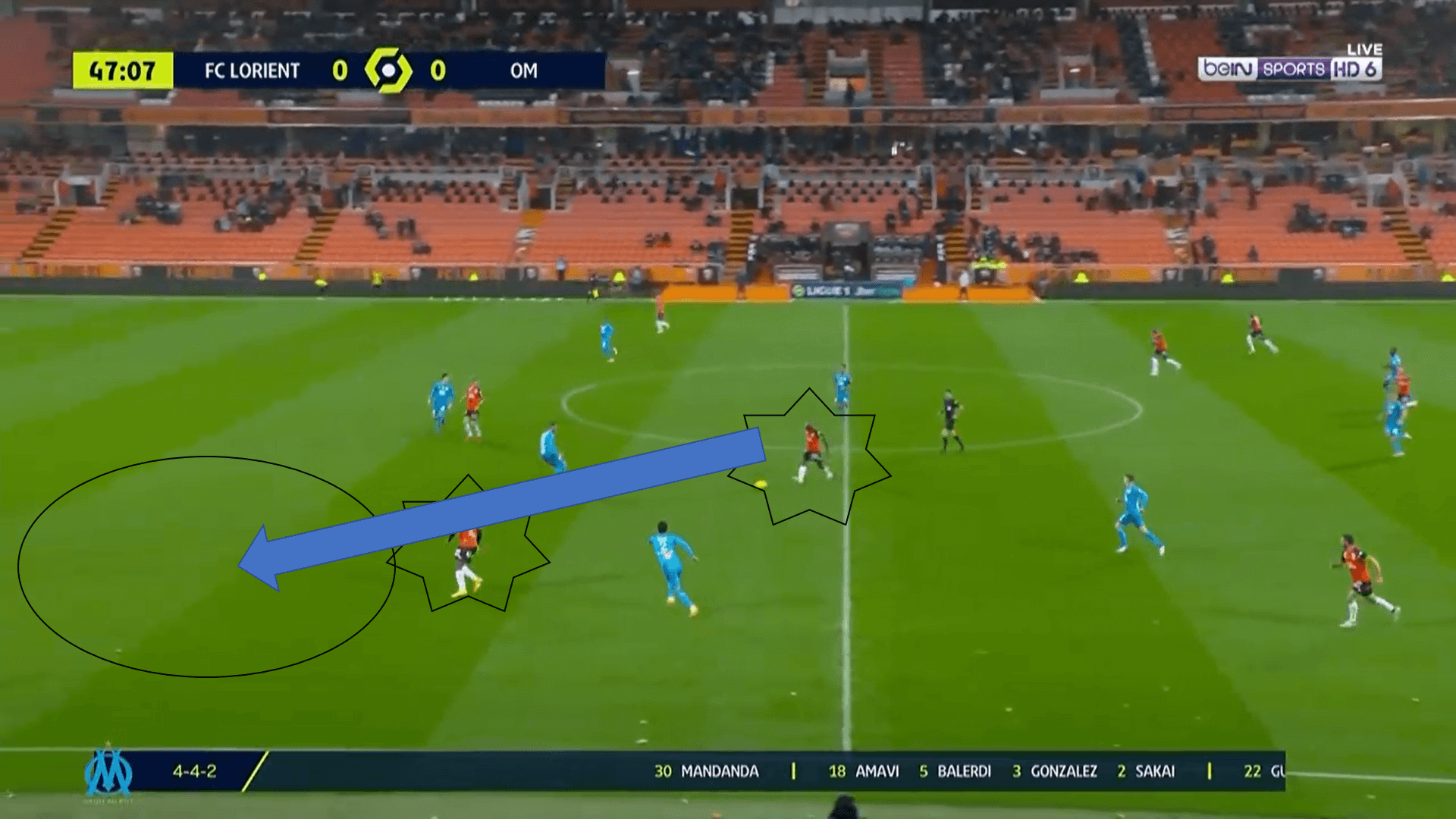 This was an effective way to open up space for their players and to then find space behind the defence.

Another method they used is purposely going to the full-back with more players. This would make the full-back have to decide whether to get the man with the ball or the one making the run. In this example, he chose to mark the player making a run which gave the player in possession time to get a shot in. 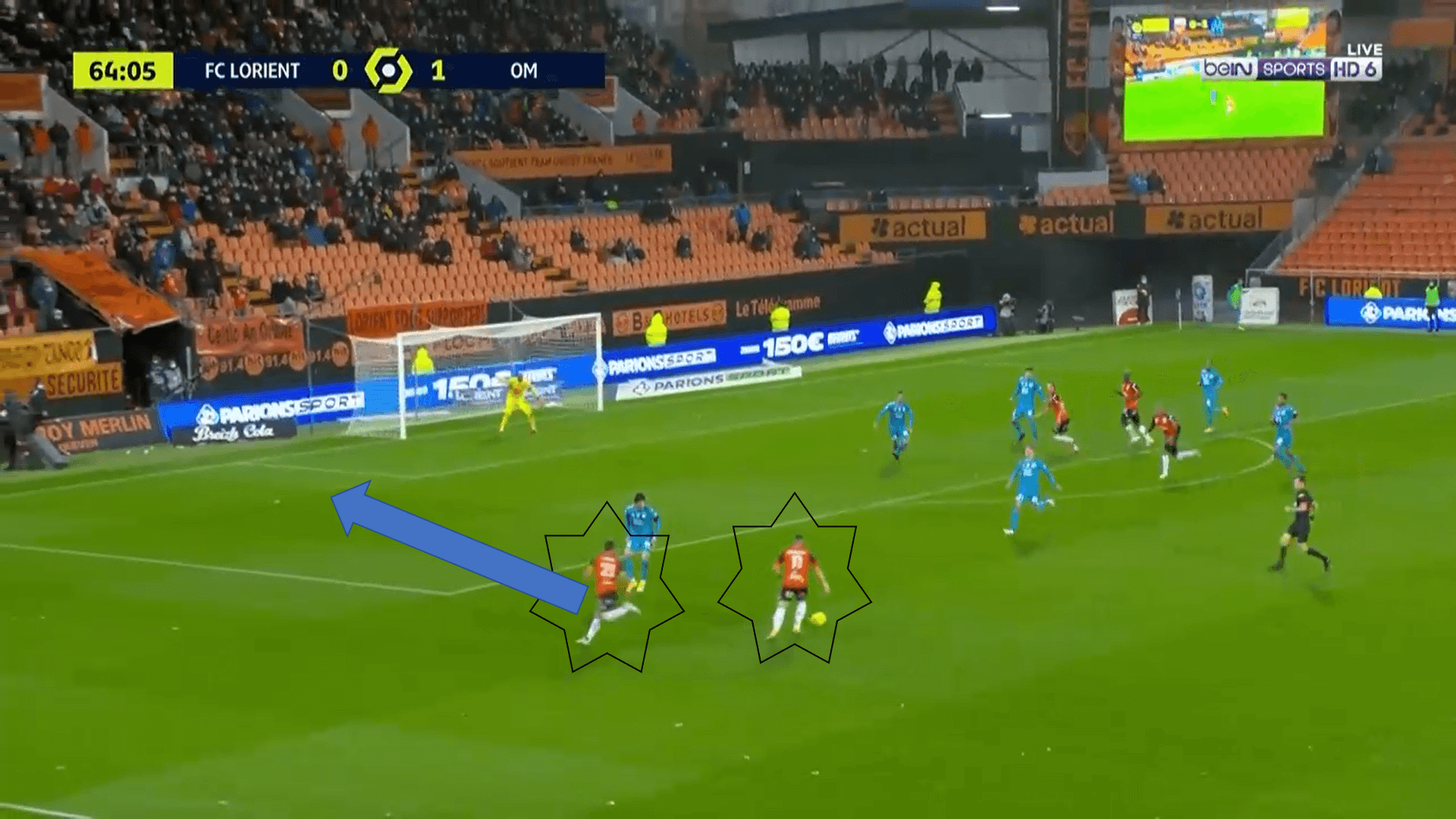 Connected to this is the fact that Lorient made their full-backs be attacking in order to create superiorities on the wing. Also, them going up would completely shift the Marseille team to one side and so they could exploit the other side if they wanted to.

For example, in the image below, the Lorient right-back is going up and has a lot of space since there is no winger to mark him and the Marseille left-back is marking the winger. We can also observe how Marseille’s left centre-midfielder is far away and running to cover him as well as the whole midfield is shifting to that side too.

This was caused because Lorient was playing through the left and quickly changed the ball to the right. Seeing as Marseille have three midfielders, they have to continually shift between sides and after a while, they get more tired. This is something Lorient tried to take advantage of. 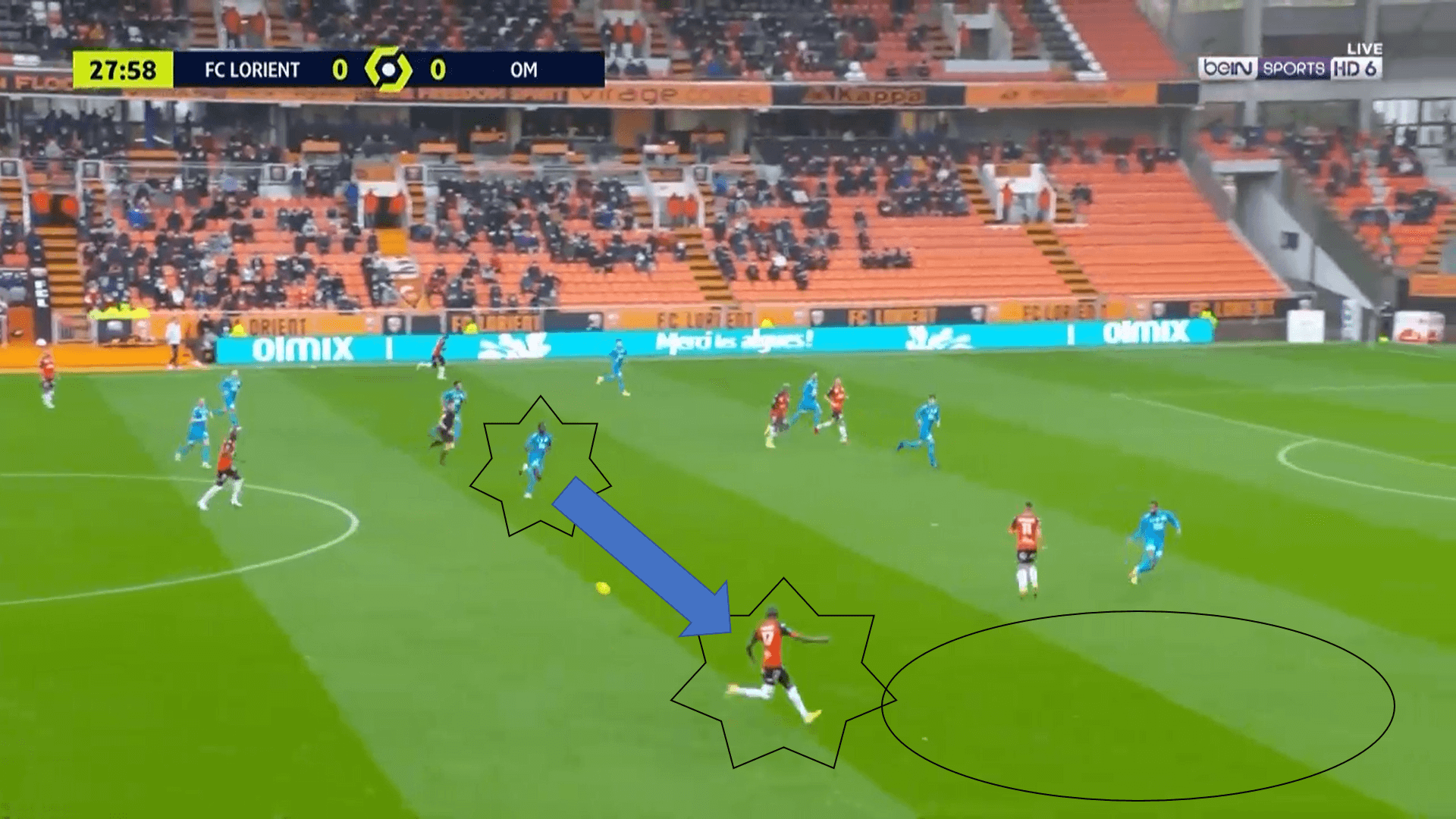 Overall, Lorient played well and competed against a Champions League team. They were brave by pressing high effectively and being creative when finding spaces in the attack. On the other hand, Marseille had most of the possession and varied between playing through the middle and the wing. Even though both teams have different objectives, Marseille did well by winning even though they did not play their best, and Lorient did well in fighting evenly against a harder opponent.