In the second matchday of this year’s UEFA Champions League RB Leipzig welcomed Olympique Lyon in a tough fixture that could pave the ways for both teams in the advance of the competition. On the paper, both teams were pretty even when it comes to their rosters, but the away team has shown great discipline and got better of the opponent sticking to their tactics.

Julian Nagelsmann’s men have struggled to find the way to beat the opposition’s dense defensive block and got out of ideas which lead them straight into losing important points at the start of the group phase.

This tactical analysis will show you hos Sylvinho’s team managed to secure away win by the result of 2:0 keeping the field narrow for the hosts and using their high-positioned defensive line against them.

Both teams started the match in the 3-4-1-2 formation, but have ridden it through a lot of transformations throughout the match. The home side midfield was held by Amadou Haidara and Konrad Leimer, who provided attacking support to their main danger-guys embodied in Marcel Sabitzer, Yussuf Poulsen and Timo Werner, but didn’t get their chance to play in the way they wanted, especially after the key defender Ibrahima Konate went out because of injury.

The French representative relied on the same grounds as their rivals, controlling the situation in the midfield with Thiago Mendes, Lucas Toussart and Houssem Aouar as the main protagonists of their density. Joachim Andersen was the one to hold their defence in readiness, and their main attacking forces were Memphis Depay and Martin Terrier who were playing as a duo on top of the lineup.

The visitors have come to Germany with the clear idea of getting even one point out of the game and their approach was there to be seen right from the start of the match. They tried to disable their opponents to play the fluid play through the midfield, so they kept their lines dense and shut down the passing lanes to most creative players of RB Leipzig’s side.

When out of possession, Olympique sat tight in a 5-2-3 block, that went from centrally-oriented one into the low type of the same structure, and also with variations into 5-2-1-2 shape. The main idea was to disable the Germans to find their strikers easily and letting them circle the defence and play it out wide.

Because of that, Werner and Poulsen were pretty much shut down and forced to lower themselves in order to get the ball, which made them less dangerous for the away goal. The communication between Lyon’s defensive and midfield line was on a very high level, and they never made a gap between them wider than ten meters.

The team from France tended to exclude from the game all the players that were operating in the central and inner-corridors of the pitch, starting with Laimer and Haidara as the ones from which most of the attacks were starting.

Olympique’s midfielders “caged” the home team’s colleagues, and guarded them creating those closed formations in which they had numerical superiority. That forced Nagelsmann’s men to play down the flanks and to skip the midfield, but the visitors’ defenders were ready to protect their goal out of those situations.

Frenchmen weren’t just defensively oriented, so they tried to find their chances to score, and did that transforming their out-of-possession structure to pressure the opponents. They went from the dense block into high pressing whenever the two guys up top felt the opposition was having a heavy touch or was in a position that was open for press.

As we can see, Lyon’s attackers went into pressurising the home team whenever the ball went back to their goalkeeper, and they did a great job cutting his forward options. Depay and Terrier were very aggressive and often forced them into playing unaddressed long balls, which lead them to regain possession easily.

The Germans were the ones that had the ball-control in the bigger part of the duel – not in terms of greater possession, but in style of play and approach – so they tried to play it around the block but didn’t manage to find empty rooms in it.

A few times at the start of the game, they caught their rivals out of attention and poached through their lines in the spaces where Sabitzer was manoeuvering, but Lyon’s players haven’t made a lot of similar mistakes, and soon closed the passing lane to the attacking midfielder.

In the picture, it is shown one of the situations in which Austrian find himself free to get the ball, and that was the initial plan for Leipzig, although it didn’t keep up until the end of the match. Olympique’s block became more and denser and organised throughout the game, and the players had clear intentions of how they will screw up their opponents’ ideas.

The most important for them was to protect the inside zones of the pitch and to let the ball flow to the flanks. Once it came to wide players of Leipzig’s side, the team was triggered into pressing and tried to force the home men into making errors.

Two strikers did an amazing job creating these situations and directing the opposition’s defenders into those traps. They had huge support from the midfielders who came closer to play, while the defenders were communicating very well, providing each other corrections.

The same thing happened when the away team was down in the low block and Nagelsmann’s guys tried to change the side of the action with long passes to their wide attackers.

Leo Dubois and Youssouf Kone tracked the actions good and were well-prepared for those balls. As it is shown, the right-back’s anticipation and sense for the game made it possible for his team to win the possession and to shut down the home team’s progress.

Moreover, since the situation didn’t go smooth for the Leipzig, they’ve changed the formation when Emil Forsberg and Christian Nkunku entered the pitch for Dayot Upamecano and Aminou Haidara. Although they planned to become more dynamic with one additional player to the three-men midfield, they didn’t overcome issues they had before the substitutions and continued struggling.

The biggest problem was that the key creators and danger-players were pushed far from the areas from which they could threaten so Leipzig lost their main attacking force.

In the image above, we see Werner and Forsberg searching for the ball next to the left-handed sideline, which is too far from their actual zone of operating which made them pretty harmless and made it more difficult for the home team to get something out of the game.

Even though the visitors have scored out of their successful high-press game, and the opponent’s direct faults, they played a good transitional game when they thought of attacking. The main idea for Sylvinho’s team was to use the pace of their offensive players and to exploit the high-positioned defensive line of the home side.

The three most-attacking-oriented men embodied in Depay, Terrier and Aouar often swapped places and went with run-ins behind the defenders’ backs. They tended to use the empty spaces and got the balls mostly from their wide defenders and midfielders.

As we can see, the striker and the offensive mid made a lot of similar rotations throughout the 90 minutes, which lead their team into having good opportunities in front of the Germans’ goal.

Aouar was the key for them both in the second plan runs, and in breaking the pressing. His good positioning in the gaps between the lines enabled them to progress through the press-structure so they could perform good transitional attacks in which they have a surplus of players.

Here we can see him positioning in the empty space and making it possible for his teammates to think forward and make the final move in breaking high pressing of Leipzig’s offensive part of the team. The French midfielder also had huge support from his lower midfield colleagues and was always provided with no less than three options for him to keep the action moving towards the final third.

Although he was the one who searched for the room in between, the same went with their strikers who very often lowered themselves in order to help their midfielders and defenders. They tried to find spots in the half-spaces, or sometimes even lower, with the same purpose Aouar had in his position – to break the lines of pressing.

Terrier and Depay felt those rooms very good and were the pass-forward options for their team as much as that was the attacking midfielder. Even though they didn’t get to a lot of chances using this idea, they managed to pull defenders out of their comfort zones and to create wider space behind their backs.

The strikers tended to do similar motions, but which resulted in them lowering and going wide to the flanks instead of just sitting in the half-spaces. Then, one of them was the play-skip wing option, who got his support from the midfield line and the other one was positioned on the further side of the play waiting for deep long balls behind the centre-backs.

As it is shown in the picture, Lyon’s players often found the way to beat the opposition’s defence in just three passes, which brought them into good goal-scoring opportunities. The role of the midfielders was key in the transitional play since they ran a lot and covered a lot of space.

RB Leipzig didn’t manage to beat their opponents’ tactics, so they deservedly lost all three points at their own turf. Olympique Lyon was playing disciplined all the way down the 90th minute, and they shut all of the most dangerous segments of their rival’s play and made a huge win that will be very important for them in the advance of the Champions League.

As it is shown in this analysis, the Frenchmen have done their homework, they knew what the Germans prepared for this fixture, and dealt with it in a pretty good manner. In spite of this result, both of the teams have more or less similar chances to go through the knockout stage, especially because it is just the second round of the group phase, but at the end, the away team has an advantage against the hosts in the long run since they won in this tough duel. 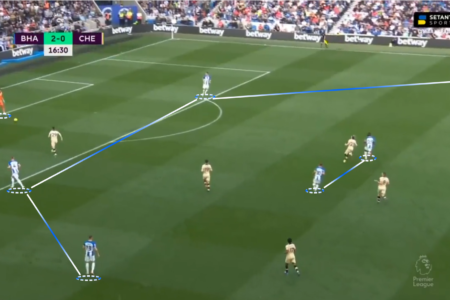 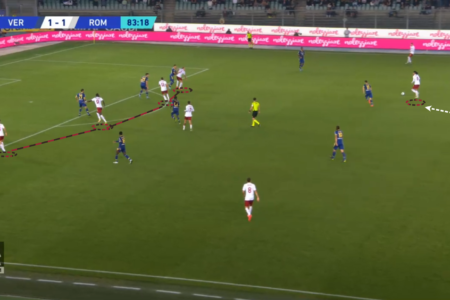 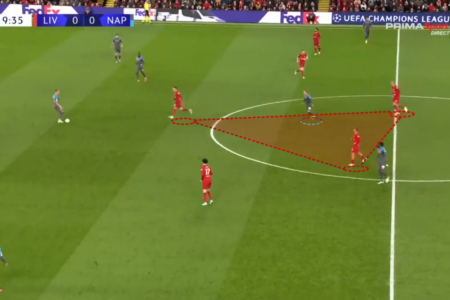