Tottenham’s nightmarish run continued with a 2-0 loss at Crystal Palace in the FA Cup. Tottenham were knocked out of the Carabao Cup earlier in the week on penalties against Chelsea. Dropping out of two cup competitions and injuries piling up has made it a brutal January for Tottenham.

The creative omissions provided a tactical issue for Tottenham in trying to break down an organized defensive setup from Crystal Palace. Using statistics and tactical analysis we will look at the tactical issues from the first half and how each team made adjustments in the second half.

Tottenham lined up with three at the back with Kieran Tripper and Kyle Walker-Peters as the wing-backs. Eric Dier and Oliver Skipp played centrally behind an attacking trio of Lucas Moura, Georges-Kevin Nkoudou and Fernando Llorente.

From the outset, Crystal Palace had clear intentions to sit deep defensively. As we can see below, Crystal Palace’s starting forwards set their line of contention in their own half and the Crystal Palace midfield trio played flat.

The Crystal Palace back line kept Tottenham from getting between the lines through being aggressive in stepping up. This negated the potential issue of depth from the strategy of playing a flat three in midfield. As the image below shows, there was very little space between the lines. 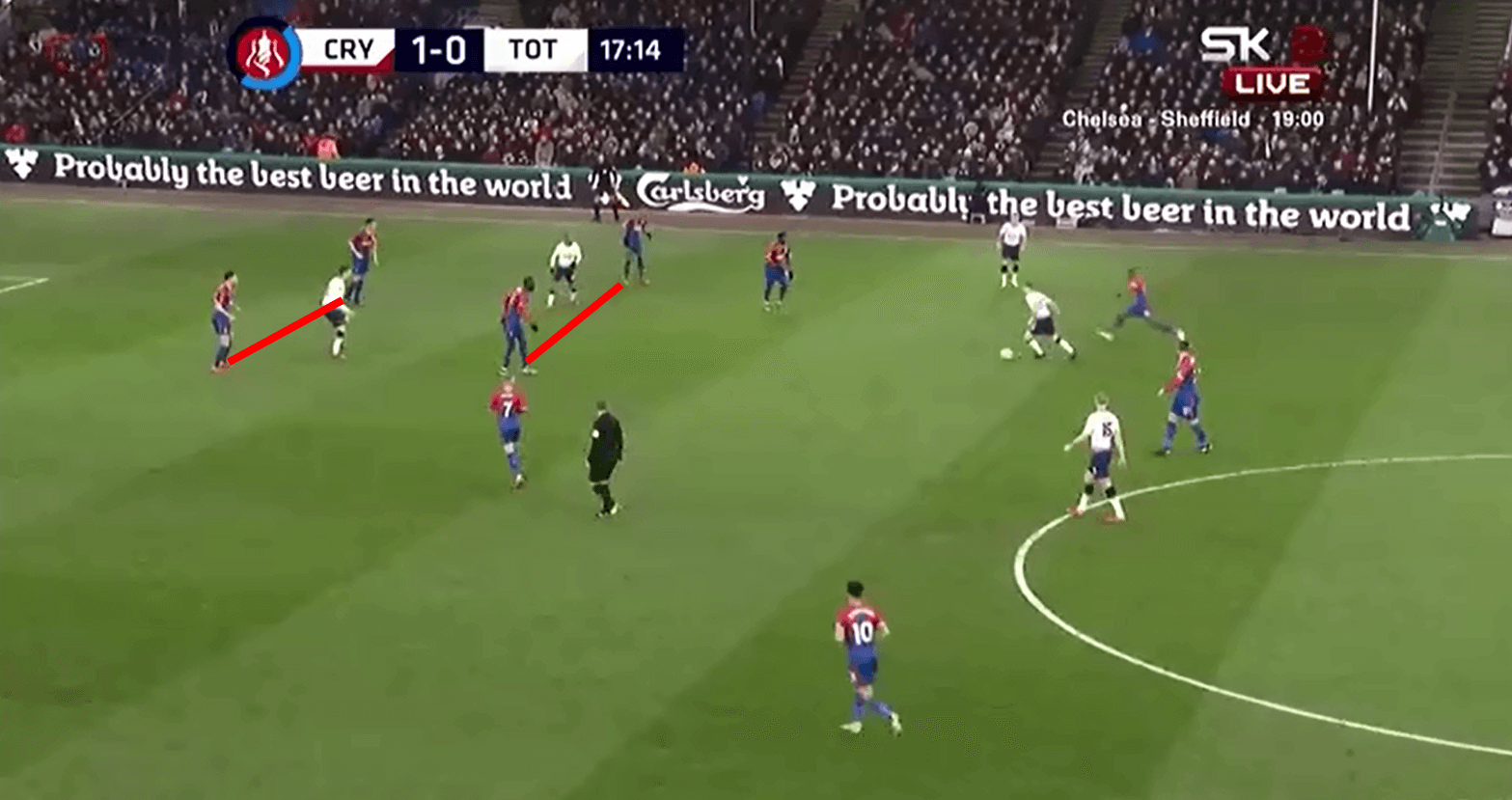 Once a ball was played into a forward’s feet, Crystal Palace aggressively attacked the ball between the lines, as shown below. 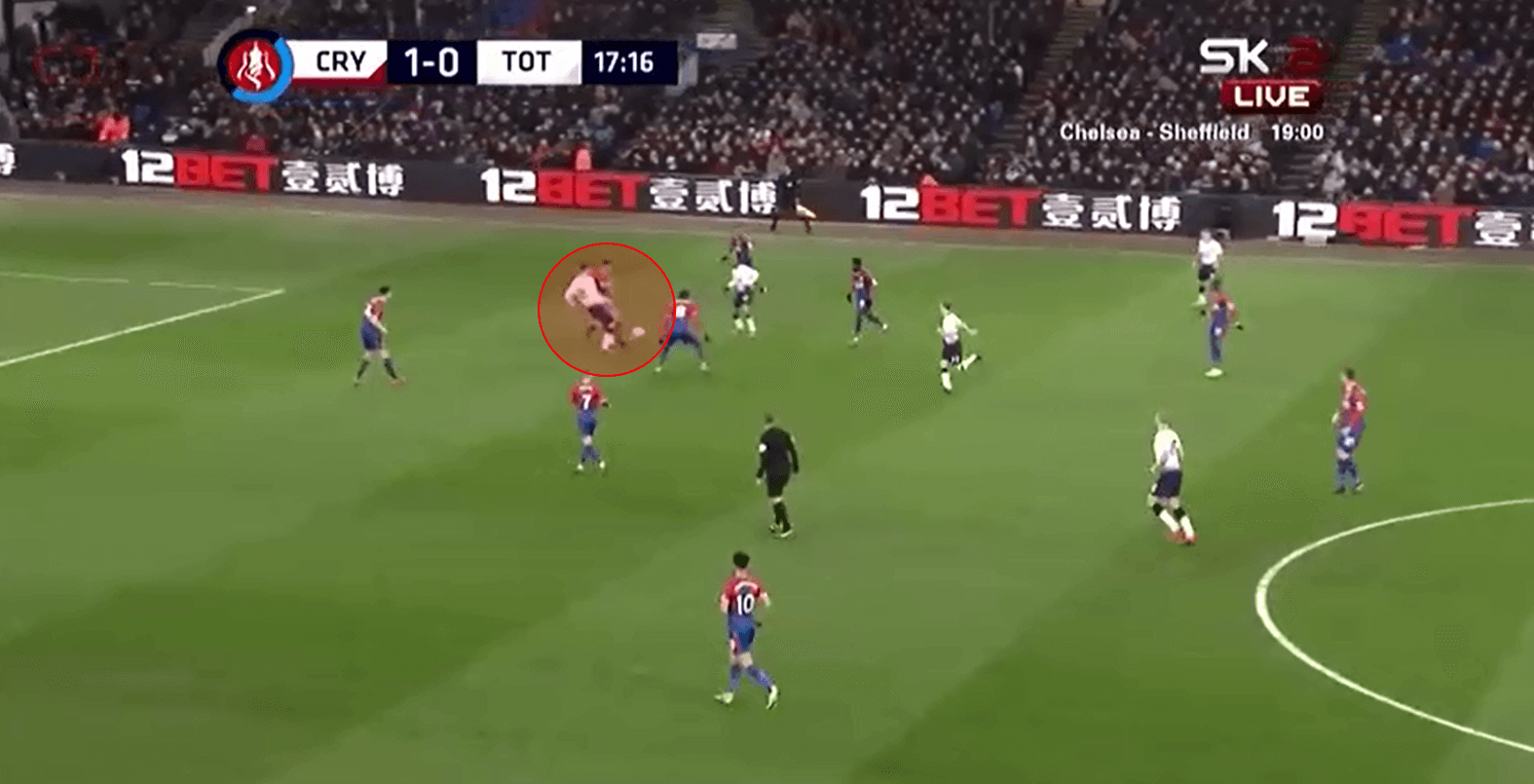 Connor Wickham’s ninth-minute goal, his first in two years, allowed Crystal Palace to stay in their compact defensive shape while looking to spring counter-attacks. This strategy worked to near perfection as Tottenham only had two shots on goal despite their 68% possession advantage. Crystal Palace finished the half with five shots on target from only 32% possession.

A handball in the box by Walker-Peters in the 34th minute provided Townsend the chance to take a 2-0 lead, which he duly did. This further emboldened Crystal Palace to sit in on defence.

Tottenham finally got their first shot on goal in the 41st minute from an excellently executed set piece. The aggression of the Crystal Palace back line finally backfired via a foul on the edge of the box. 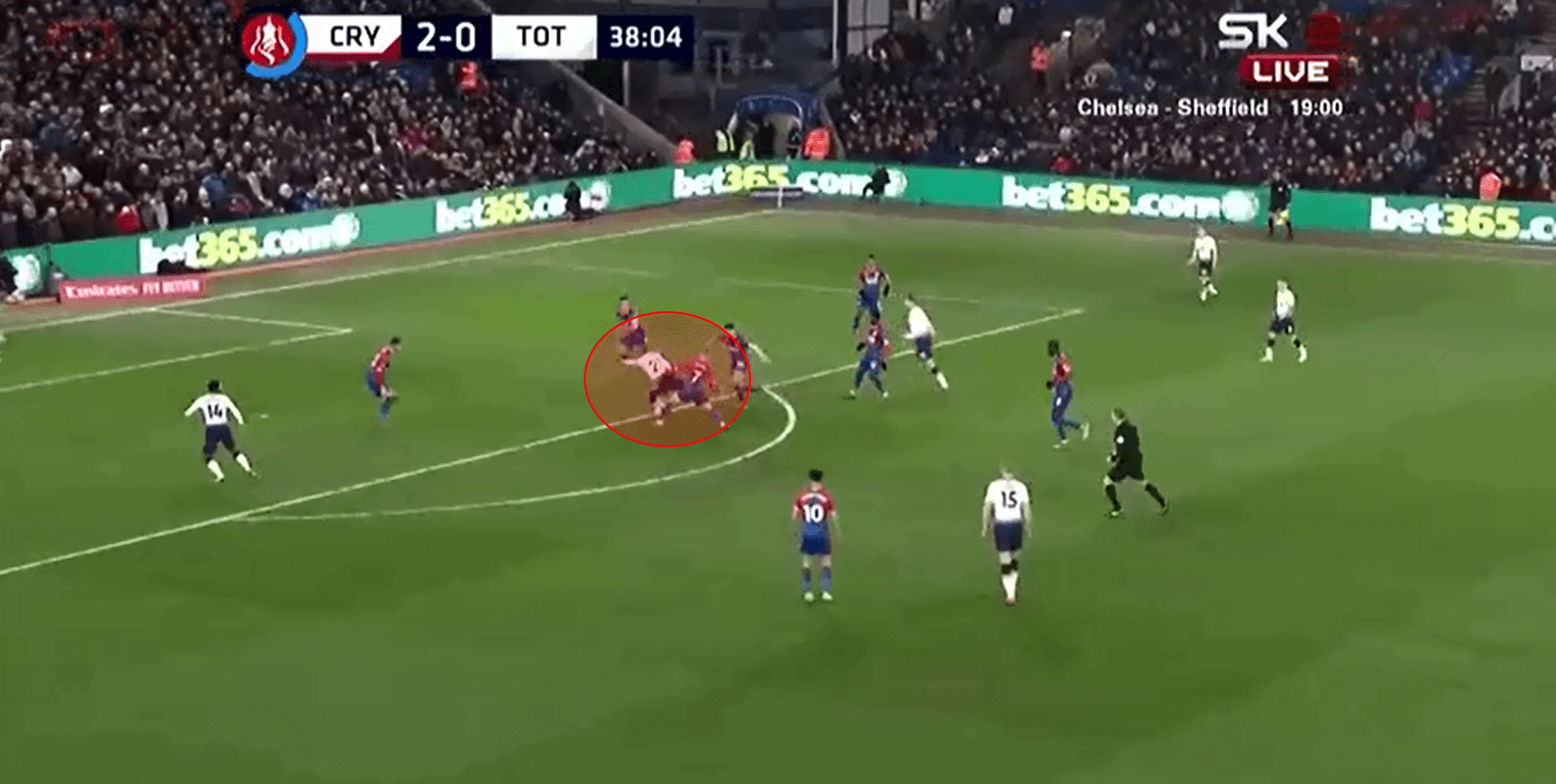 Kieran Trippier set up over the ball projecting every intention of shooting. 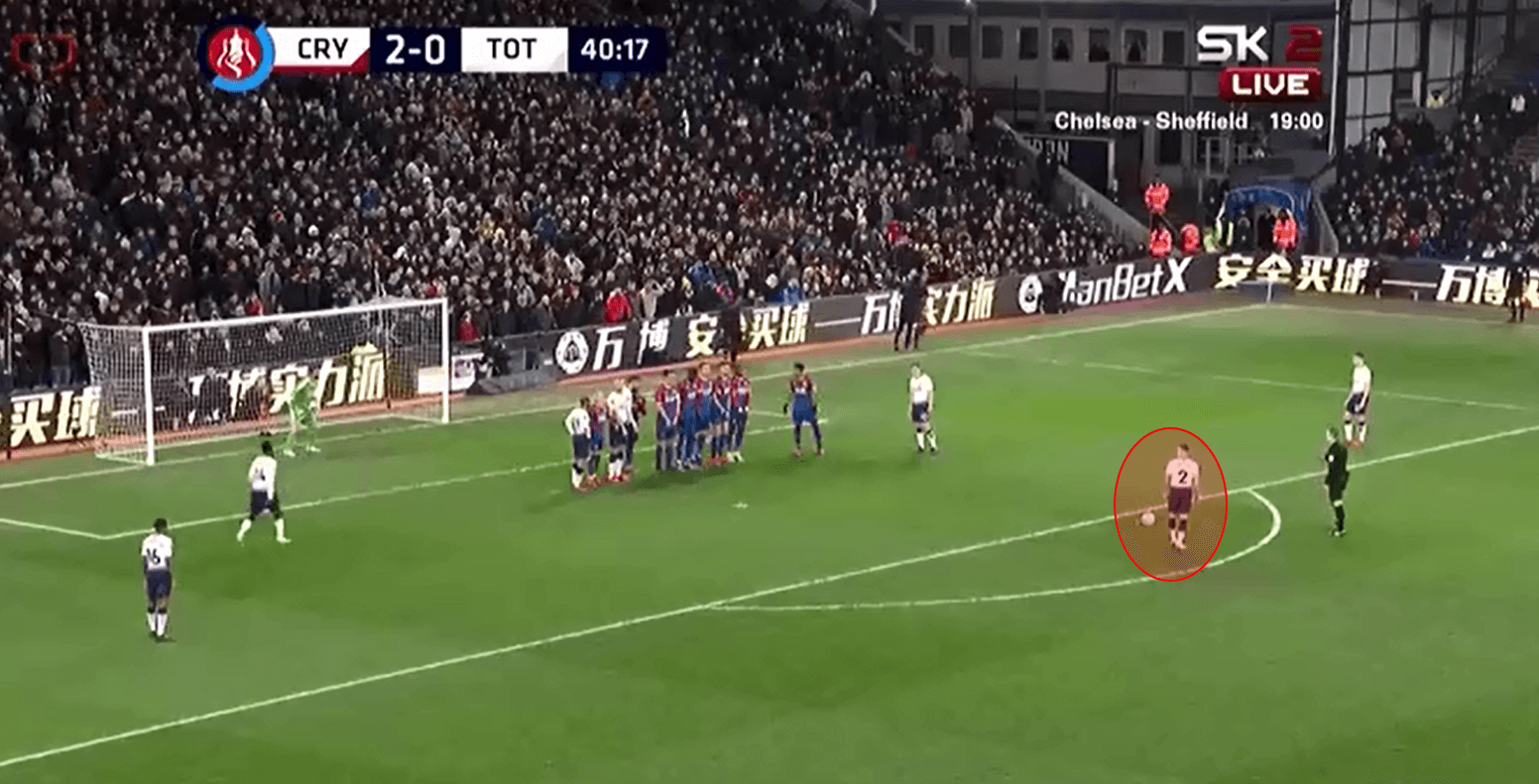 Lucas Moura wisely blocks off the end of the Crystal Palace wall leaving Nkoudou wide open on the edge of the six-yard box.

Nkoudou scuffs the shot, allowing Julian Speroni to smother the ball – and the ensuing rebound – to maintain Crystal Palace’s advantage. This was Tottenham’s first big chance.

Two minutes after the scuffed shot by Nkoudou, Crystal Palace once again came undone with a foul. Patrick van Aanholt brought down young Tottenham defender Juan Foyth in the box. Unfortunately for Spurs, Kieran Trippier dragged the penalty wide of the left post.

The first half played directly into Crystal Palace’s tactical strategy of sitting deep and countering. Tottenham did not have the ability to break them down on the run of play. The lack of creative attackers caused Tottenham’s attack to be stymied by the compact, organized Crystal Palace defence. Despite the lack of build-up though, they still had two of the best chances of the first half through overzealous defending by the Crystal Palace back line.

Down 2-0 and with only two shots on goal, despite the massive possession advantage, meant changes needed to be made for Tottenham. Mauricio Pochettino brought on creative attacker Erik Lamela in place of defender Jan Vertonghen. The substitution brought a change of formation from their original three back into a back four. Lucas Moura moved into a central attacking role and Lamela slotted on the right to complete the transition to a 4-2-3-1. 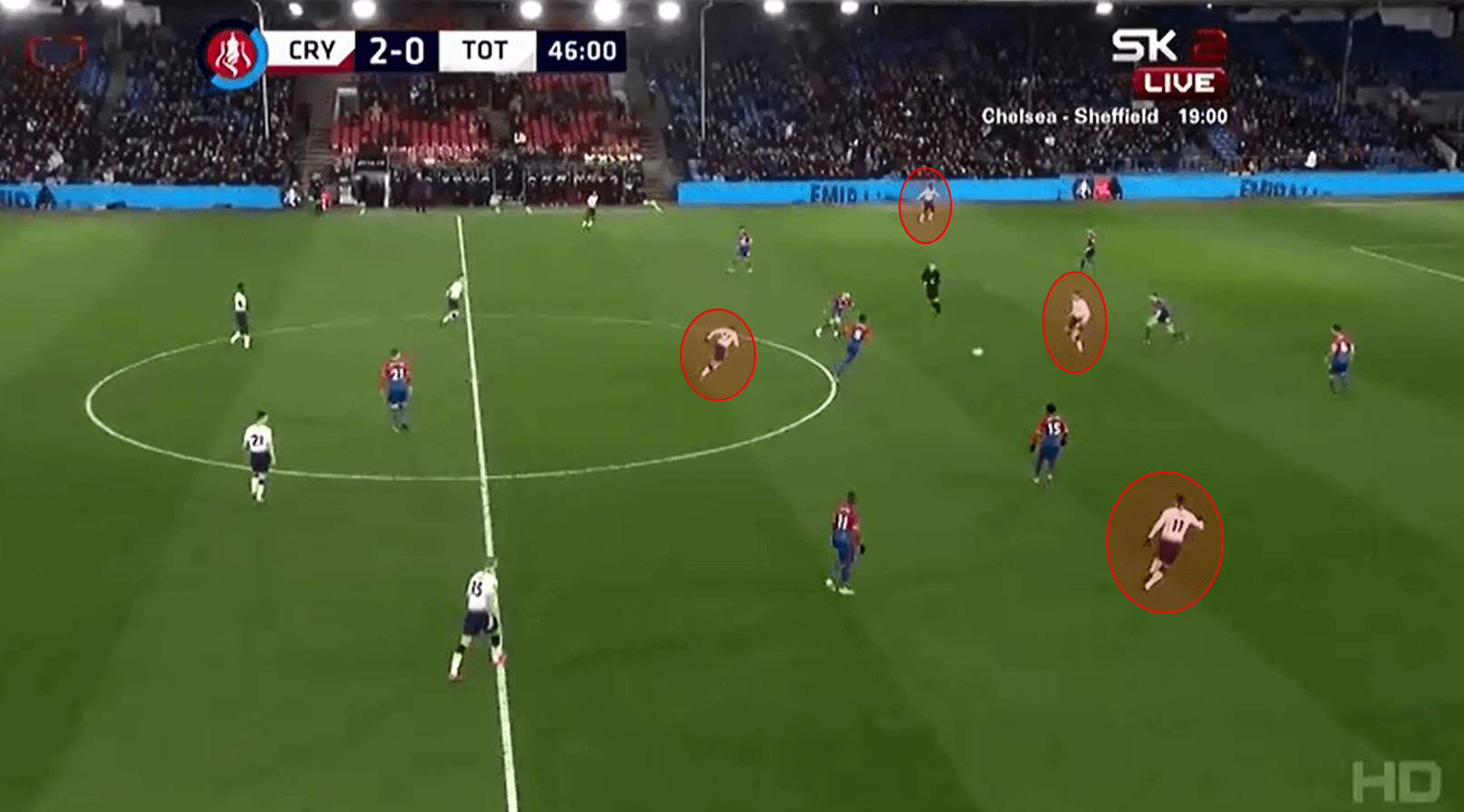 The formation change got a more creative player on the field in exchange for a redundant defender. With Crystal Palace sitting so deep and flat, the back three for Tottenham was not necessary in the buildup.

Crystal Palace countered the Tottenham adjustment to a 4-2-3-1 by leaving Wilfried Zaha high out of possession to isolate the young Tottenham defender Juan Foyth on the counter-attack. This adjustment put considerable pressure on Tottenham in transition, but also left Crystal Palace vulnerable to overloads down the right side. 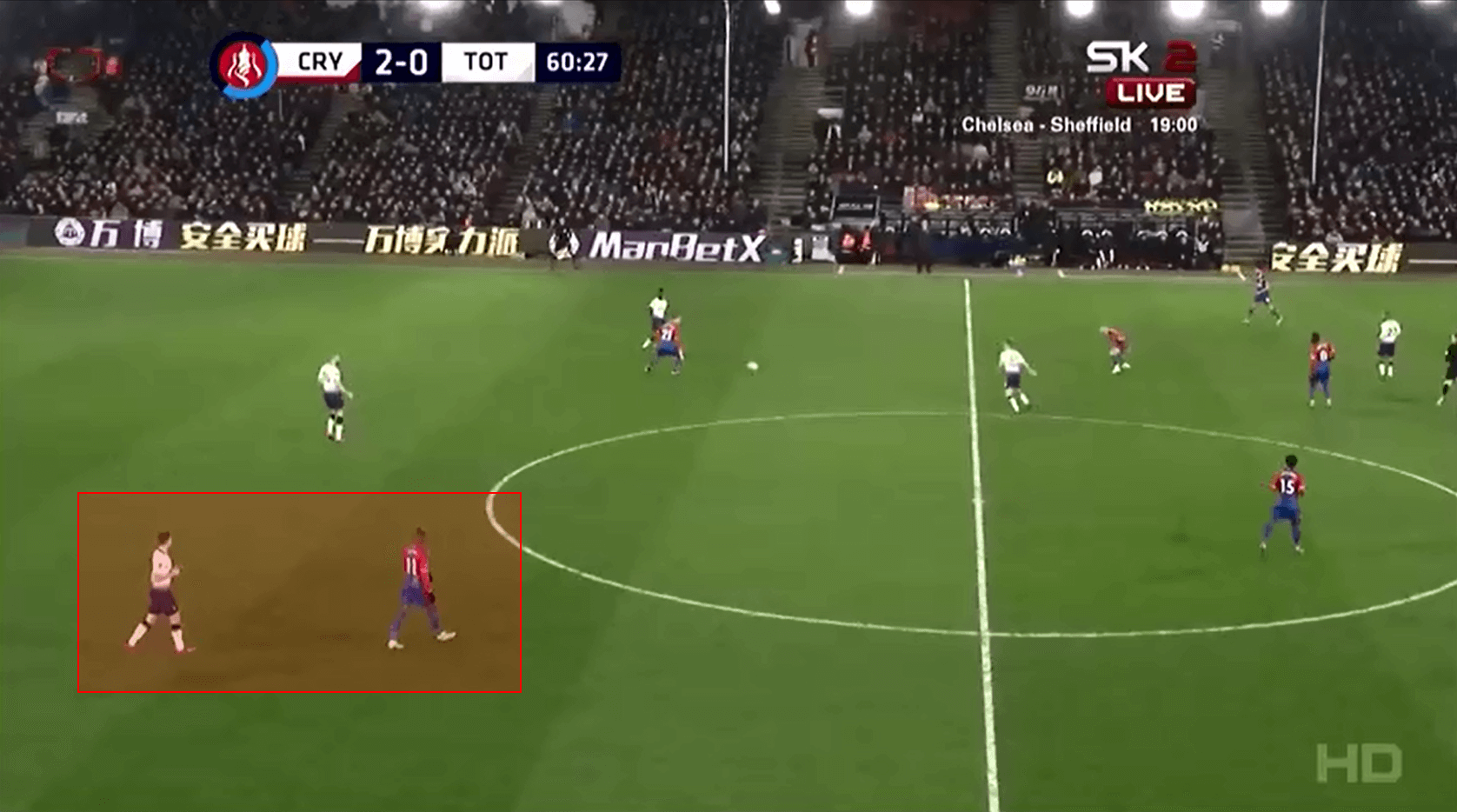 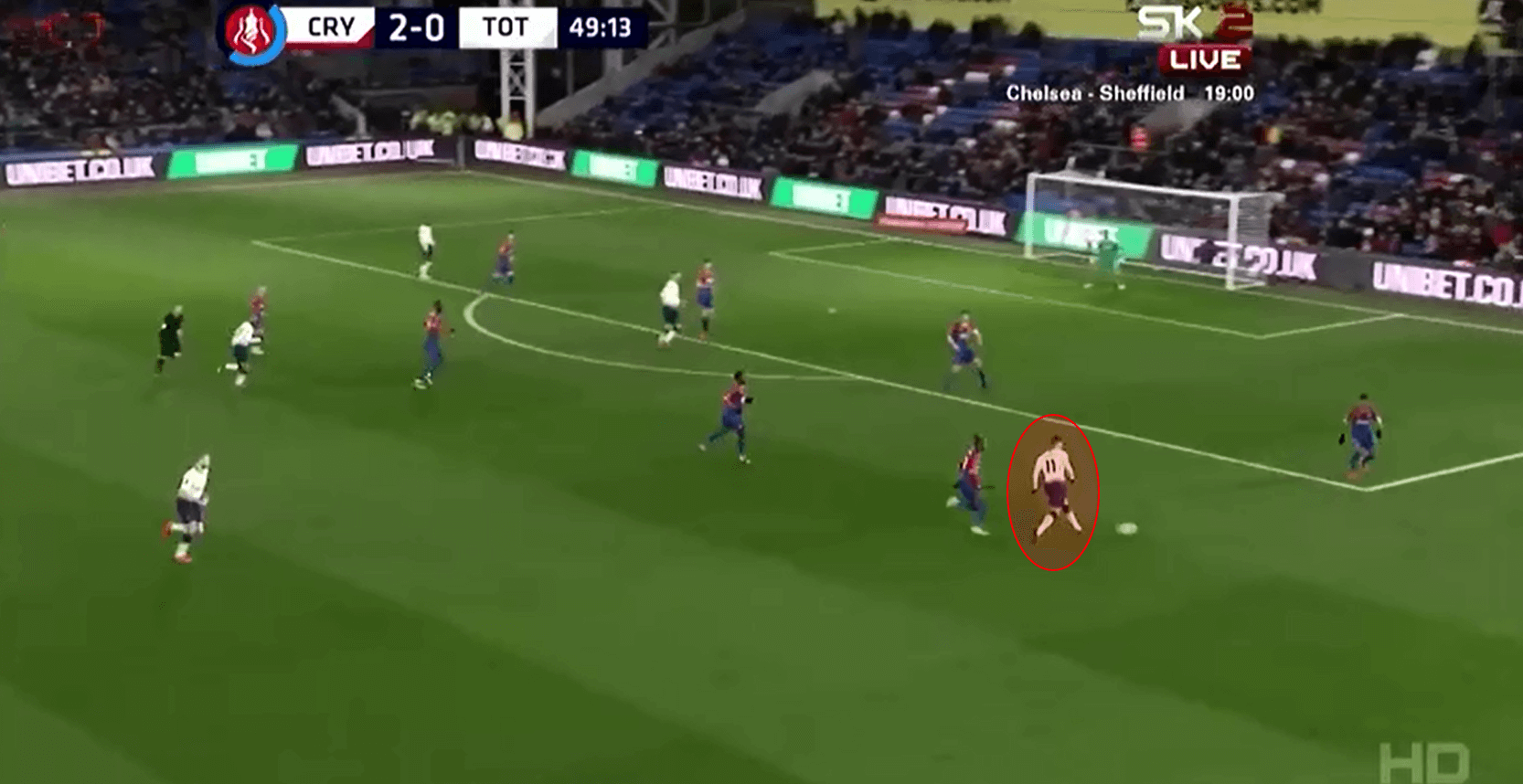 Lamela plays it wide to Trippier who immediately drops it to Eric Dier. Dier is in a great position to drive a cross into the box to three willing runners. 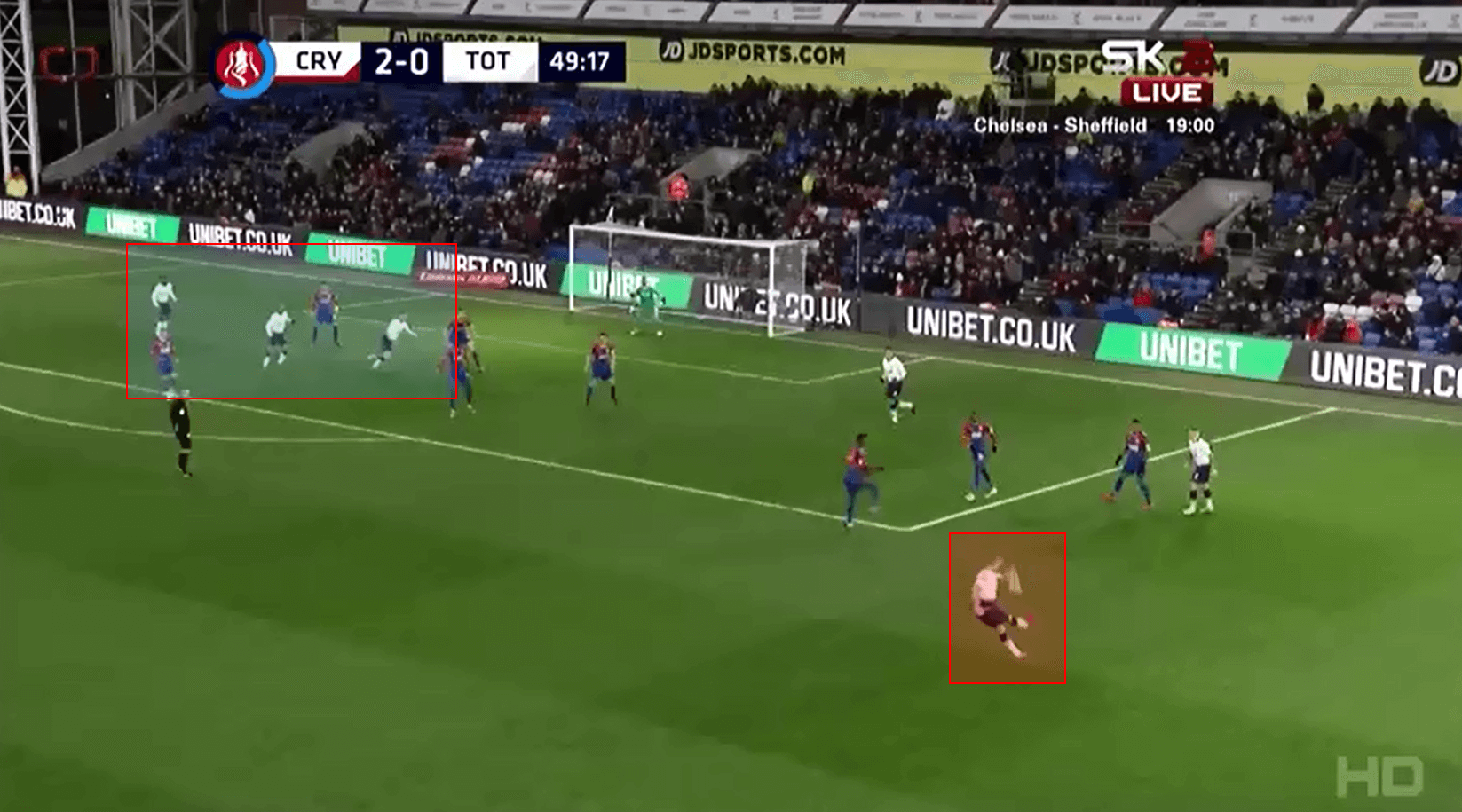 Desperate defending by Joel Ward is required to save a goal. In the 52nd minute, we see Trippier playing the ball into Llorente’s feet on the overload side. Notice that Zaha is nowhere in the picture. 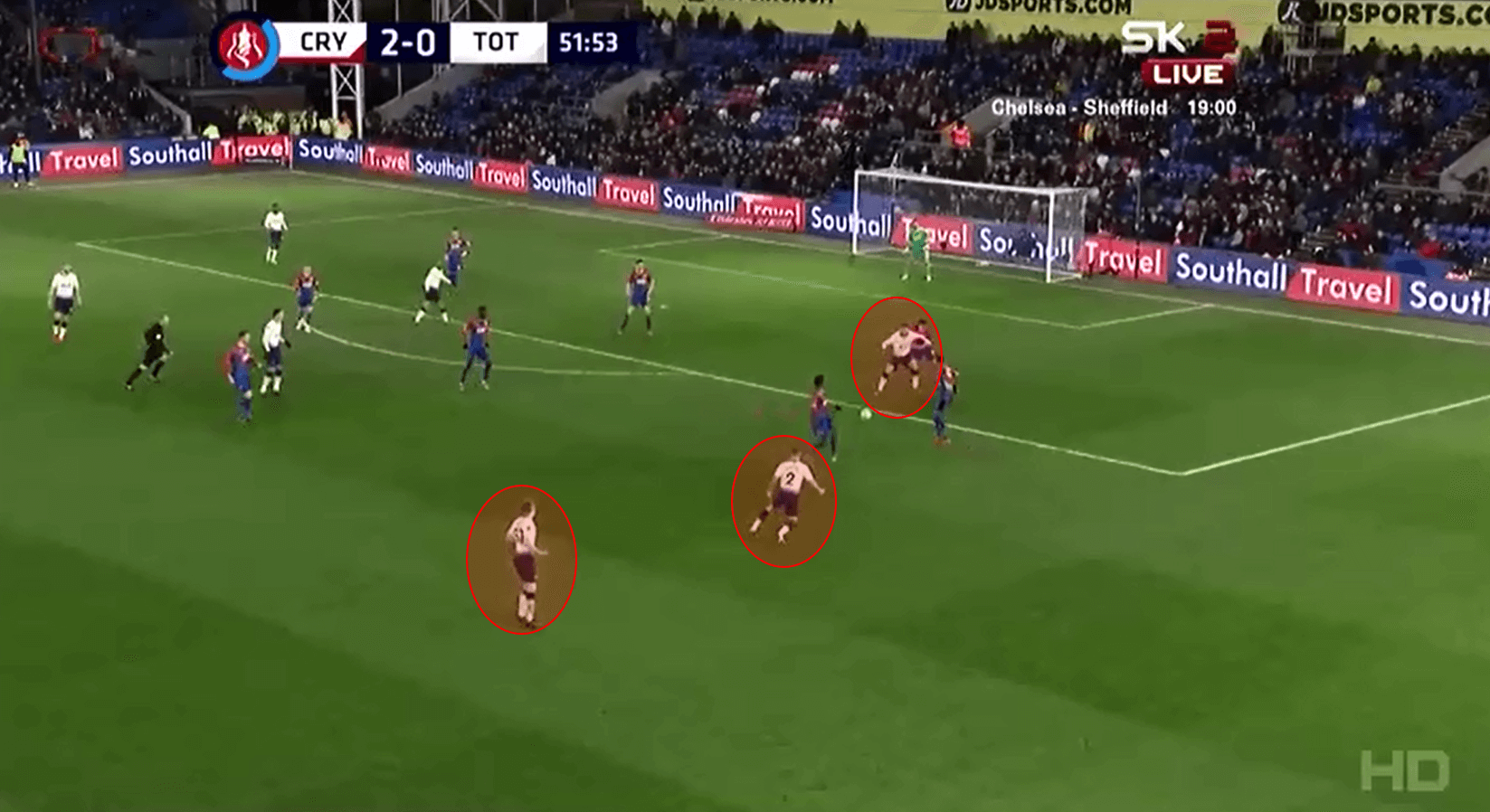 Llorente turns and puts a low shot towards the far post, but Speroni makes the lunging touch to put it out for a corner. In the 56th minute, Zaha’s positioning is again exploited by Tottenham. Moura picks up the ball in midfield and dribbles into space behind Zaha. 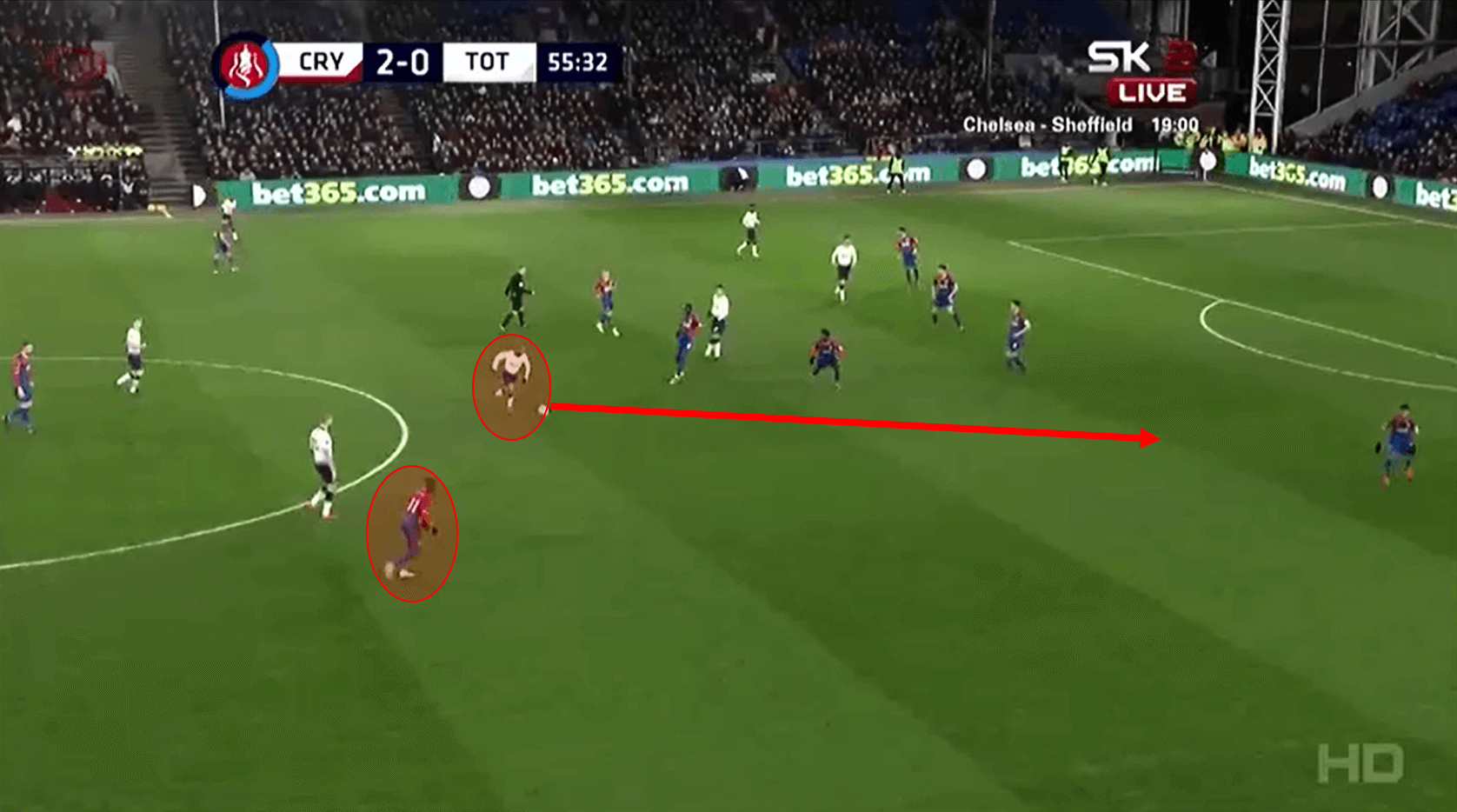 Eventually, Schlupp fouls Moura on the edge of the box. In the 62nd minute, we see Zaha hanging high up the field shadowing Foyth.

Tottenham play the ball out to Trippier. The England full-back is isolated wide against Van Aanholt, but has Lamela making a run behind. 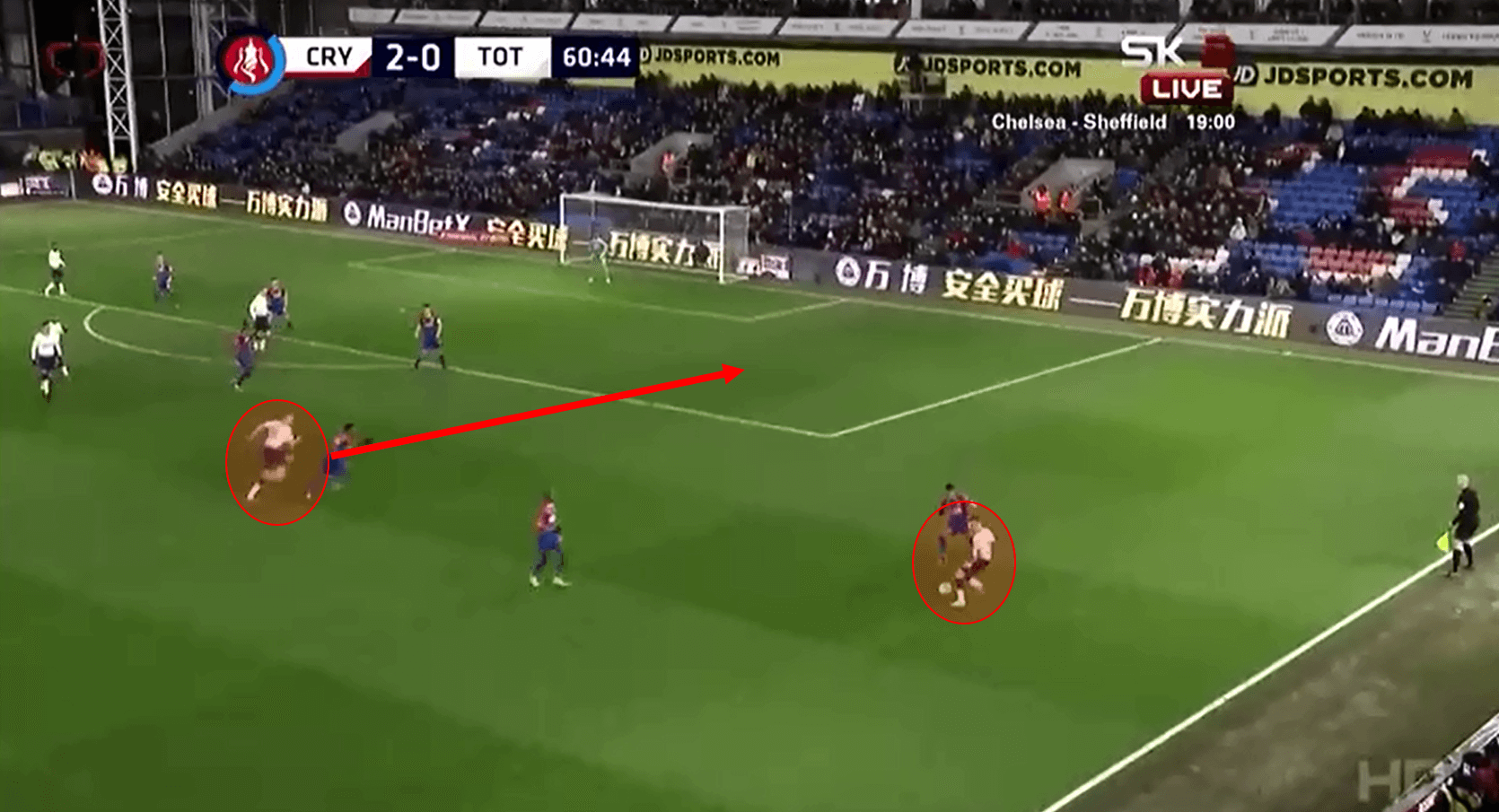 Trippier plays Lamela into the box, who then squares to Llorente for a point-blank shot. Once again though, Speroni keeps it out. It was yet another example of Tottenham exploiting the space left by Zaha’s high positioning. 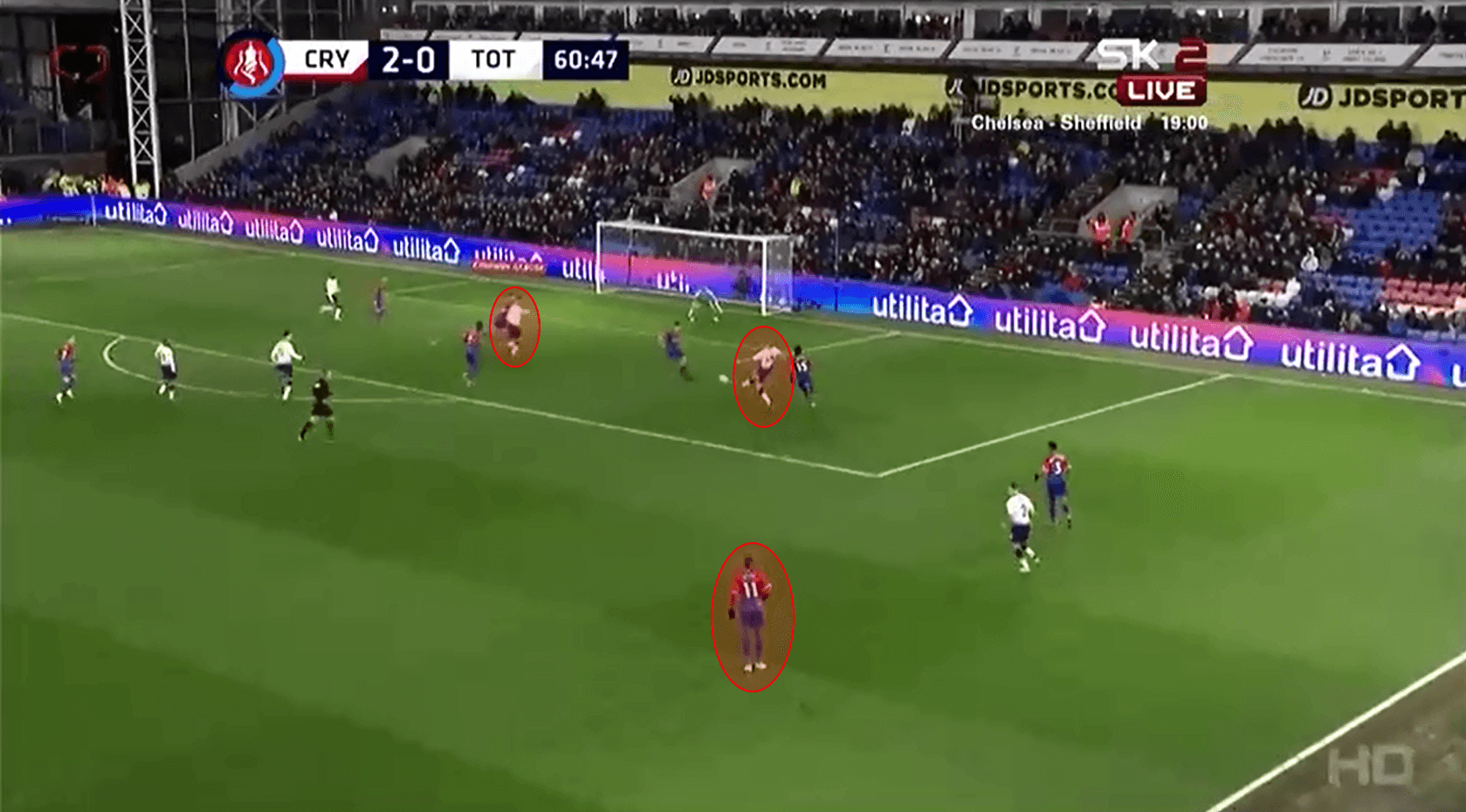 The entire first half saw Tottenham fail to convert their massive possession edge into shots from open play. The two big chances both came from Crystal Palace fouls in and around the box.

The addition of Lamela and exploitation of Zaha’s positioning provided Tottenham with all of the impetus. Unfortunately, Crystal Palace’s early goal and their own missed chances in the first half could not be overcome. It was a missed opportunity to advance for Tottenham by not having a creative attacking player on the pitch from the off.