Arsenal Women bounced back with a 3-0 FAWSL win over Reading Women. The win sees them keep pace with Manchester City Women at the top of the FAWSL. Birmingham City Women beating Chelsea Women also helped their cause massively.

Arsenal Women went into this one with an air of uncertainty. Last week they lost to Chelsea, first-team regulars Lia Walti and Lisa Evans joined the already heaving injury list and they were without manager Joe Montemurro on the day. Despite this, they showed why they are still in this title race.

We’ll see why in this tactical analysis.

This season, Arsenal’s most effective formation has been a 4-3-3. However, with injuries mounting up, the team’s shape has changed during the course of the season.

They have become adaptable to both three and four-man defences in that time. When a three-man defence has been used, it’s usually been accompanied by a midfield five. That wasn’t the case on Sunday and it wasn’t a problem. 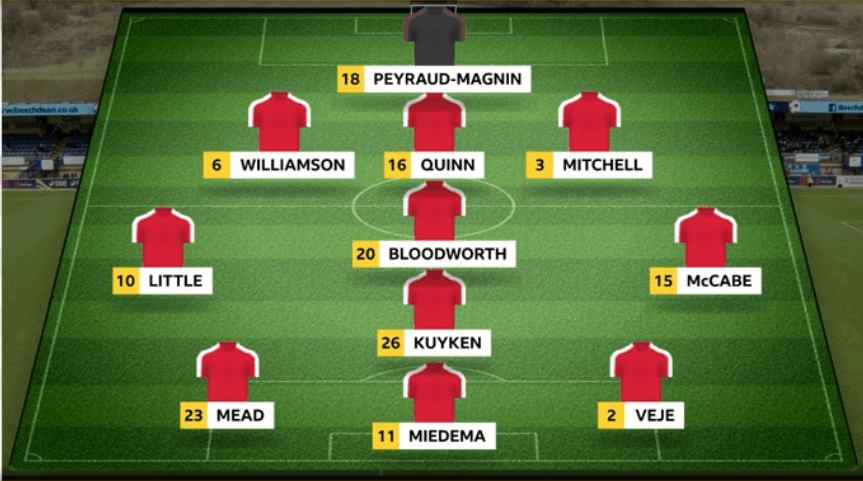 Arsenal set up in a 3-4-3 with a midfield diamond which helped them control proceedings. Both on and off the ball, this system aided Arsenal massively. In possession they were fluid as they have been for much of the FAWSL season, and off the ball they were able to dictate where Reading played.

A big reason why Arsenal have somewhat struggled in recent weeks is their lack of options. Both Jordan Nobbs and Danielle van de Donk have been out injured. This left Kim Little as the only attacking midfielder.

However, using a midfield diamond allowed Ava Kuyken to be introduced and she had a great impact in the number 10 position. Below we’ll see how her movement led to Arsenal’s opener.

There, we saw the fluidity at which Arsenal were able to progress upfield. However, later in the move, we see the importance of having more than one attacking midfielder in the side.

Here we see the importance for Arsenal to be able to have multiple attacking options centrally. Lately, as a result of the personnel injured, Miedema has become isolated up front. This makes her a much easier proposition to defend against than when she is joined by midfield runners.

This was also seen when Van de Donk came on and won a penalty from a run beyond Miedema into the box. Miedema’s goal also saw her break the FAWSL record for goals in a single season. She now has 16.

Arsenal’s spatial dominance out of possession

As previously mentioned, Arsenal’s shape didn’t just help offensively but also defensively. With Reading looking to play rather than counter, they often tried to build centrally. Here’s how Arsenal’s shape stopped them from doing that.

As Reading retreat, Arsenal reset into their shape with the narrow midfield diamond and wingers dropping back.

Arsenal were able to recreate this shape across different areas of the pitch. It proved to be an incredibly effective game plan. However, with Reading adamant not to let Arsenal control their style, this led to a somewhat scrappy affair.

They tried as hard as they could to progress upfield centrally but the area was just too crowded. This led to both teams becoming frustrated and 28 fouls being awarded in the game. Thankfully for Arsenal, however, things went to plan and they were able to ride out the figurative and literal storm.

Overall, even though it wasn’t the prettiest game, it was a positive one for Arsenal. They showed how they can effectively adapt to different teams, which could help in the final stretch of the season. With a game in hand over league leaders Manchester City, they are still in the driving seat. Maybe this will be what can give them the edge at the end of the season.

Along with Kuyken it was also encouraging to see Melisa Filis being given a debut. With her first touch she showed her good spatial awareness before assisting McCabe’s winner, as seen below.

YOU DON'T STOP THOSE ?