The 2021-22 UEFA Champions League has seen some interesting tactical games and some sleeper upsets like Villarreal winning against Juventus and also winning their first leg against the mighty Bayern Munich. But one game that is still interesting from a tactical perspective is the Chelsea–Real Madrid tie in which Madrid won the first leg at Stamford Bridge 3-1.

Though it looks like a long way for Chelsea, the defending champions still have the quality and the mastermind in the form of Thomas Tuchel to overturn this tie around. With the away goals rule not around anymore, the tie gets even more interesting and slightly helps Chelsea where a 2-0 win can also be enough to at least take it to extra time.

This tactical analysis in the form of a preview features how Chelsea and Tuchel can outclass Carlo Ancelotti’s men with their tactics and produce a memorable comeback in the backyard of the “Kings of Europe”. Let’s begin the preview.

The major change going into the 2nd leg from Tuchel should be a change in formation from the 3-4-3 to the 3-5-2. Tuchel has always mixed his system between those two since his arrival at Chelsea which also depended largely on the players available. With the likes of Mason Mount, he was able to play both 3-4-3 and 3-5-2 at the same time due to Mount’s versatility enabling him to play as a winger and as a midfielder in a three-man midfield. The UCL final last season saw him using the 3-5-2 / 3-4-3 hybrid with the 3-5-2 predominantly seen where Mason Mount would drop very often. The 3-4-3 isn’t a bad setup for Tuchel at all and in fact, it was really effective in most of the games he played. The change to a 5-2-3 defensively in that system was really difficult for teams to break down. The key point here is that it involves the front three to be very disciplined and execute their press perfectly. If that fails then the whole block breaks with the two-man midfield struggling to cover the spaces. 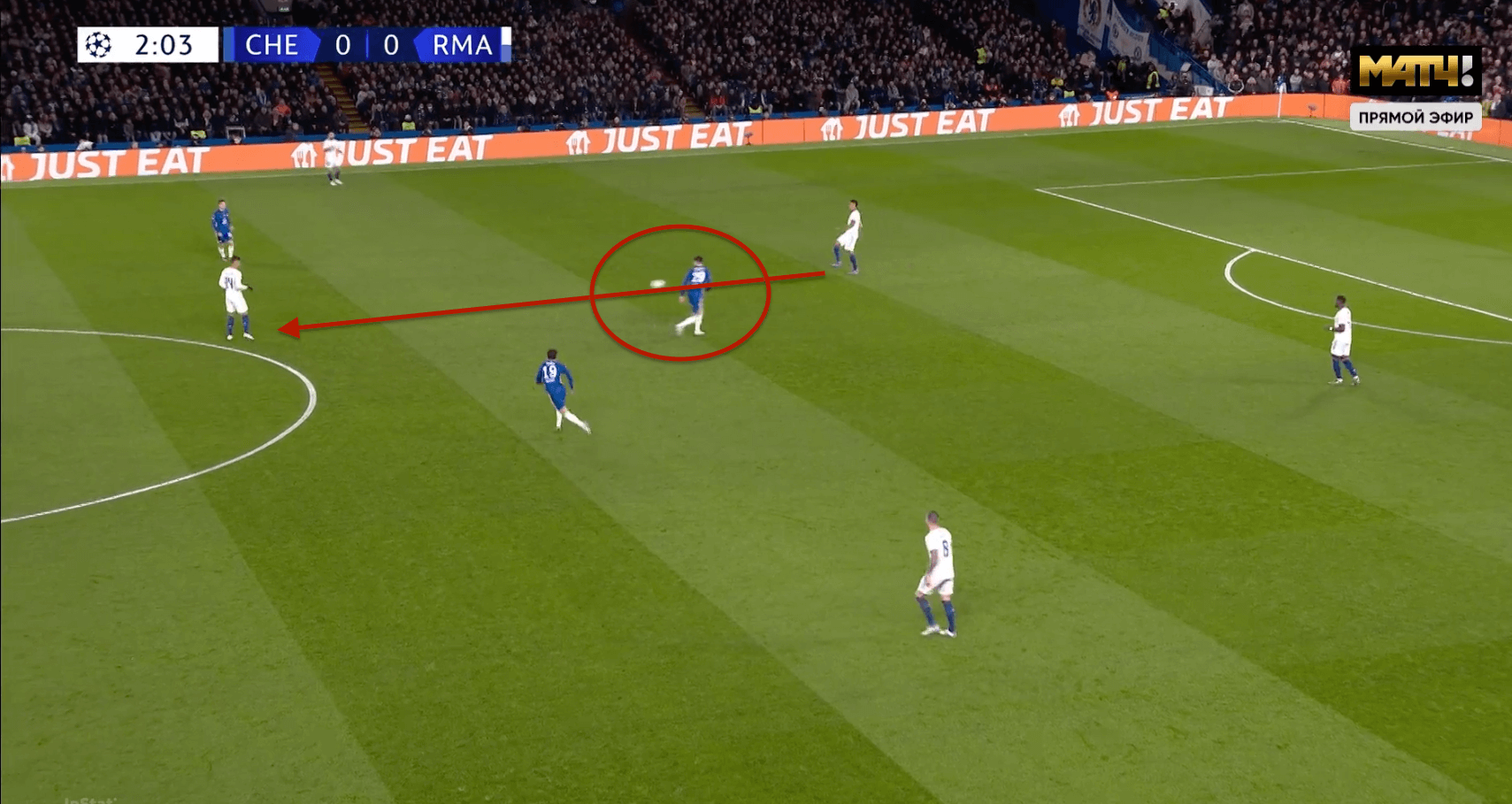 We can see that in the image above where Havertz has a very poor press and fails to keep Casemiro in his cover-shadow that sees the latter being easily given a pass from Militao and Real Madrid ease through the first line of Chelsea. Usually marking Casemiro is very key to the pressing in a 5-2-3 for Chelsea and they didn’t get it right a lot of times in the first leg.

After breaking the first line it was going to be easy for Real Madrid to play around with the second line as both Jorginho and Kante are already outnumbered with Modric, Kroos and Casemiro attracting them and adding Benzema to that just make things even more difficult for them when the Frenchmen looks to drop deep. 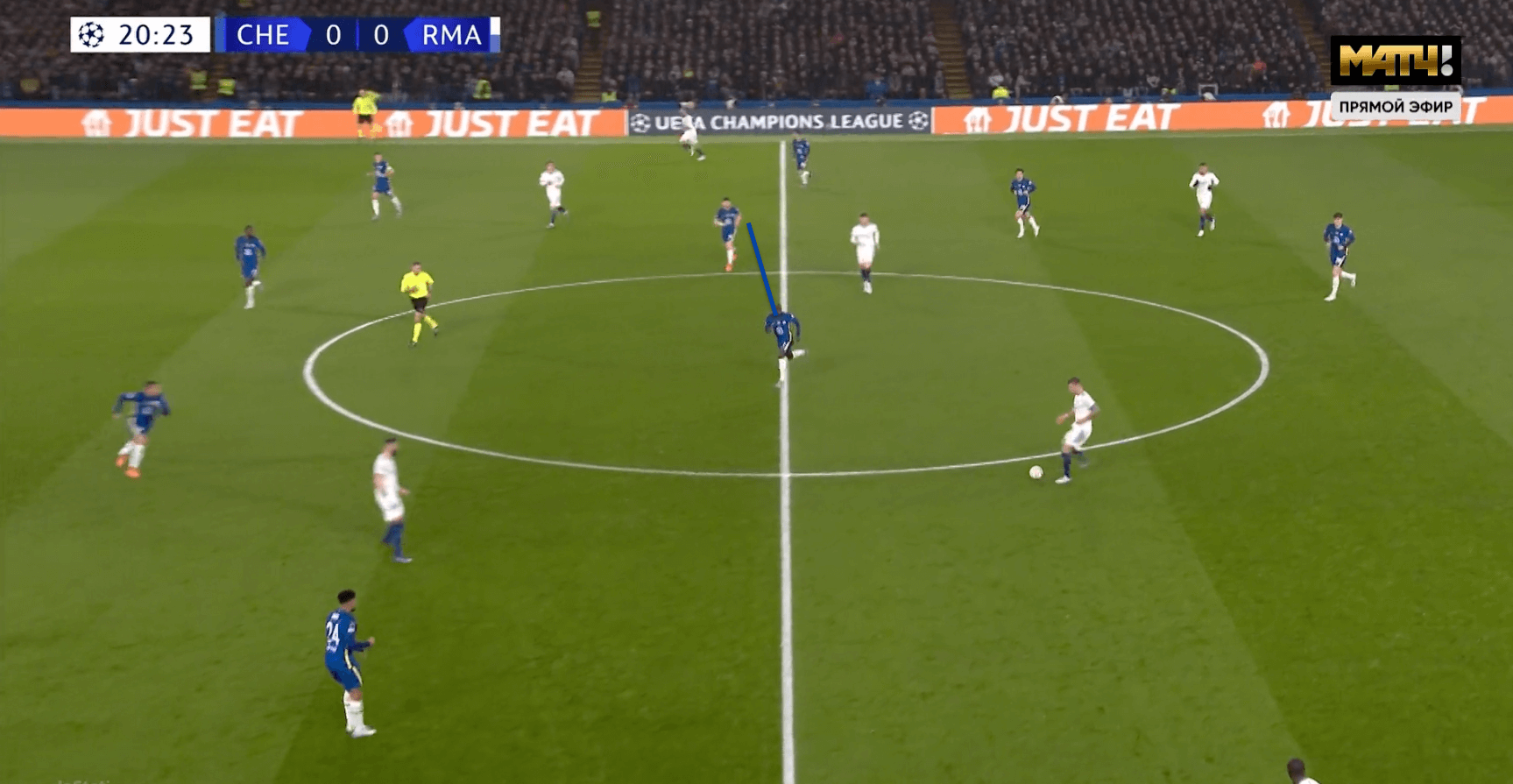 The ability of Benzema to drop deep and turn away and progress the ball is among the very best in the world and only Harry Kane, among centre-forwards, can be considered to be equal to the ability of the Real Madrid talisman. So it’s not always a possibility for the centre-backs to follow him and tightly mark him to win the duel especially if it’s his day. Moving to a 3-5-2 here would solve this particular issue where Jorginho can now mark and cover Benzema while Chelsea themselves have an extra cover in the midfield and are not bound to get outnumbered.

This would also mean the front two would press the Real Madrid CBs directly and one of them can even press the ball-holding one with Casemiro as his shadow. The front two with a man-man press would put both Alaba and Nacho (probably) for the next leg where the latter is especially prone to mistakes when being pressed very intensely. We can see Barcelona following a 4-4-2 press in their 4-0 thrashing of Real Madrid last month. 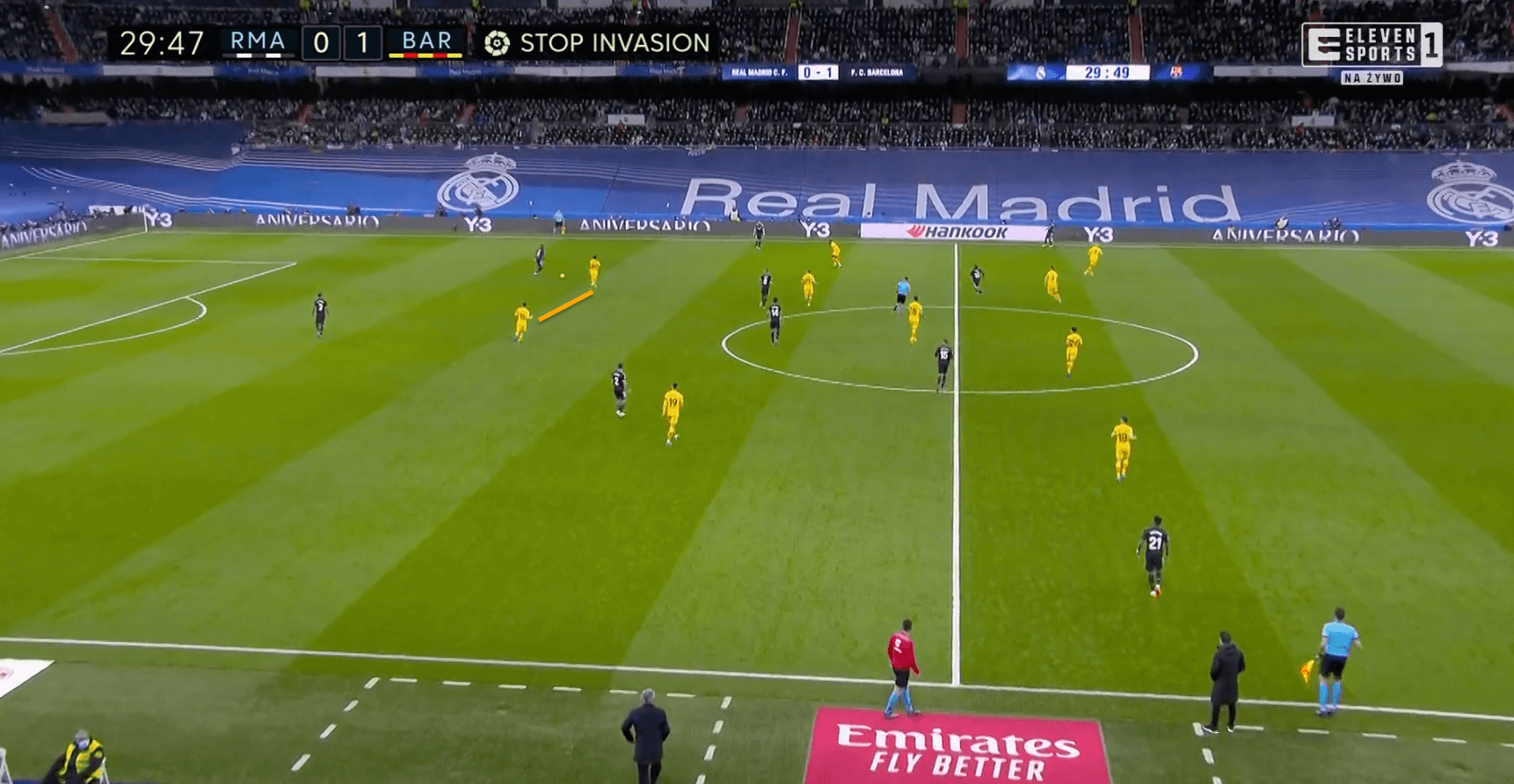 Real Madrid might counter this by having both Modric or Kross dropping deep as a 3rd man in the defence but having the CM follow them would be very key in this and Chelsea’s midfield and the forward line should go man-man with heavy intent and aggression. Also if Jorginho decides to stay in his position then one of the CBs must decide whether they would have to press Benzema. Giving him space in front of the defence will prove to be fatal while one of the CBs must be aggressive in pressing since Chelsea can afford to do it by playing three CBs. 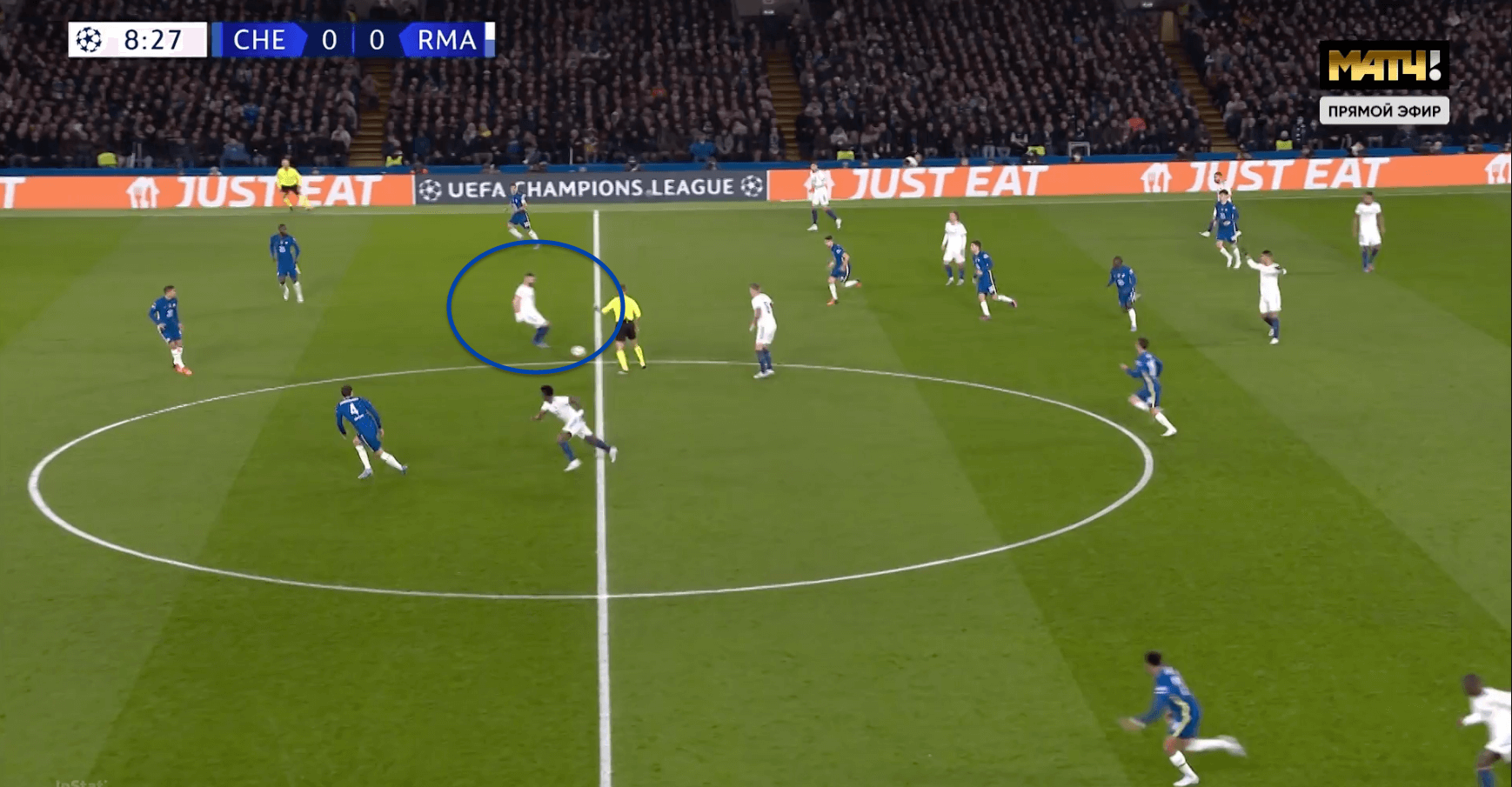 They failed to do that in the above image and it’s very easy for him to turn and drive forward with the ball. They faced the same issue in their game against Brentford last time too where Ivan Toney dropped deep and constantly created a threat with none of the Chelsea defenders able to deal with his presence on the pitch. This can be seen in the image below where Thiago Silva follows him but still finds it difficult to mark him and win the ball back. 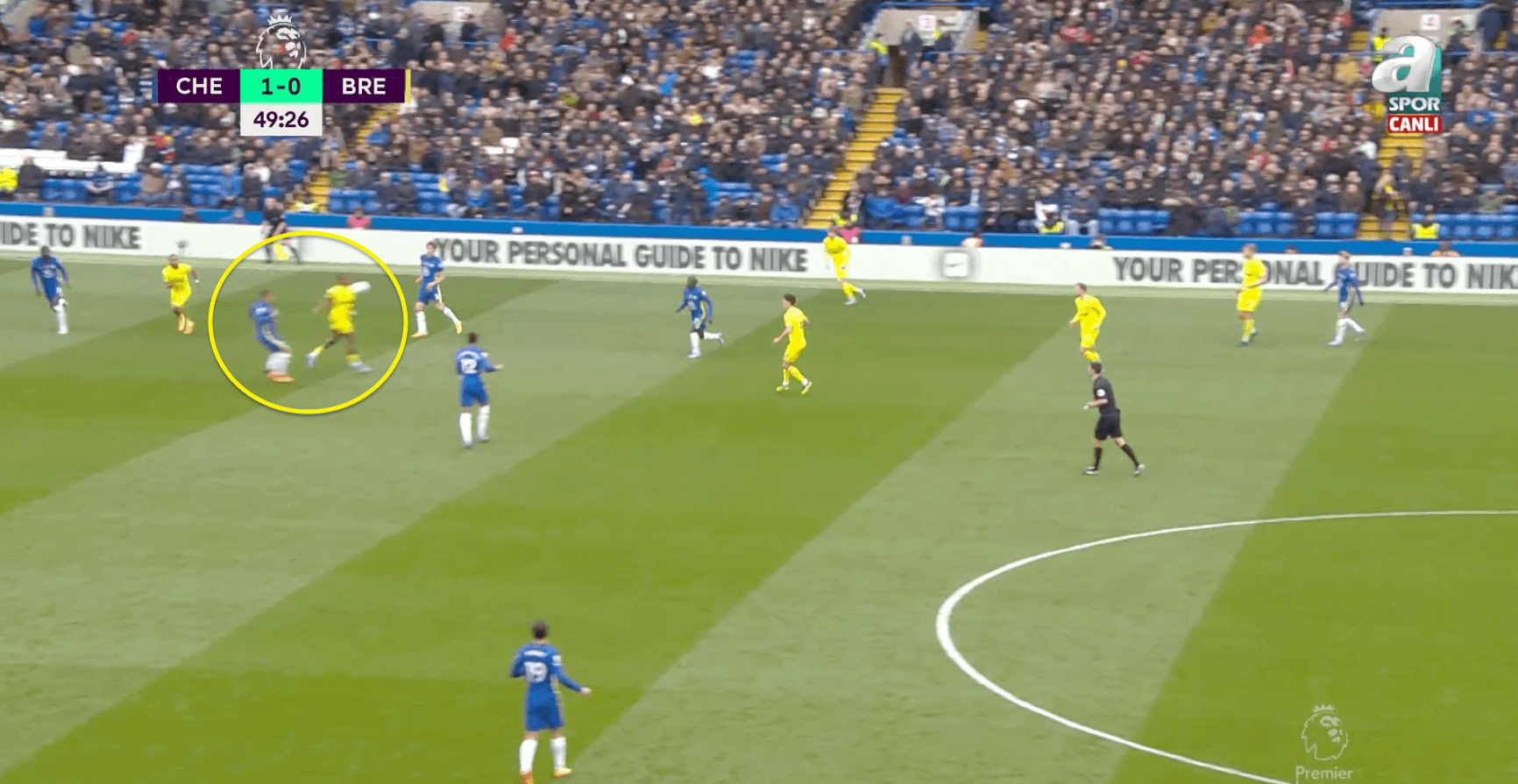 Using the wide regions is going to be very important for Chelsea. In the recent weeks where they have really looked good barring the result in the El Classico where their eternal rivals specifically targeted the flanks and used a wide range of strategies, as seen in the image below, like double-spacing, overloads, etc to target the final third. Although Chelsea doesn’t have a penetrative winger like Dembele and if they are going with 3-5-2, they might not have a winger in place as well but one of their forwards can position a little wide and create this overload with the wing-back where this would work especially with Reece James and Havertz on that side. 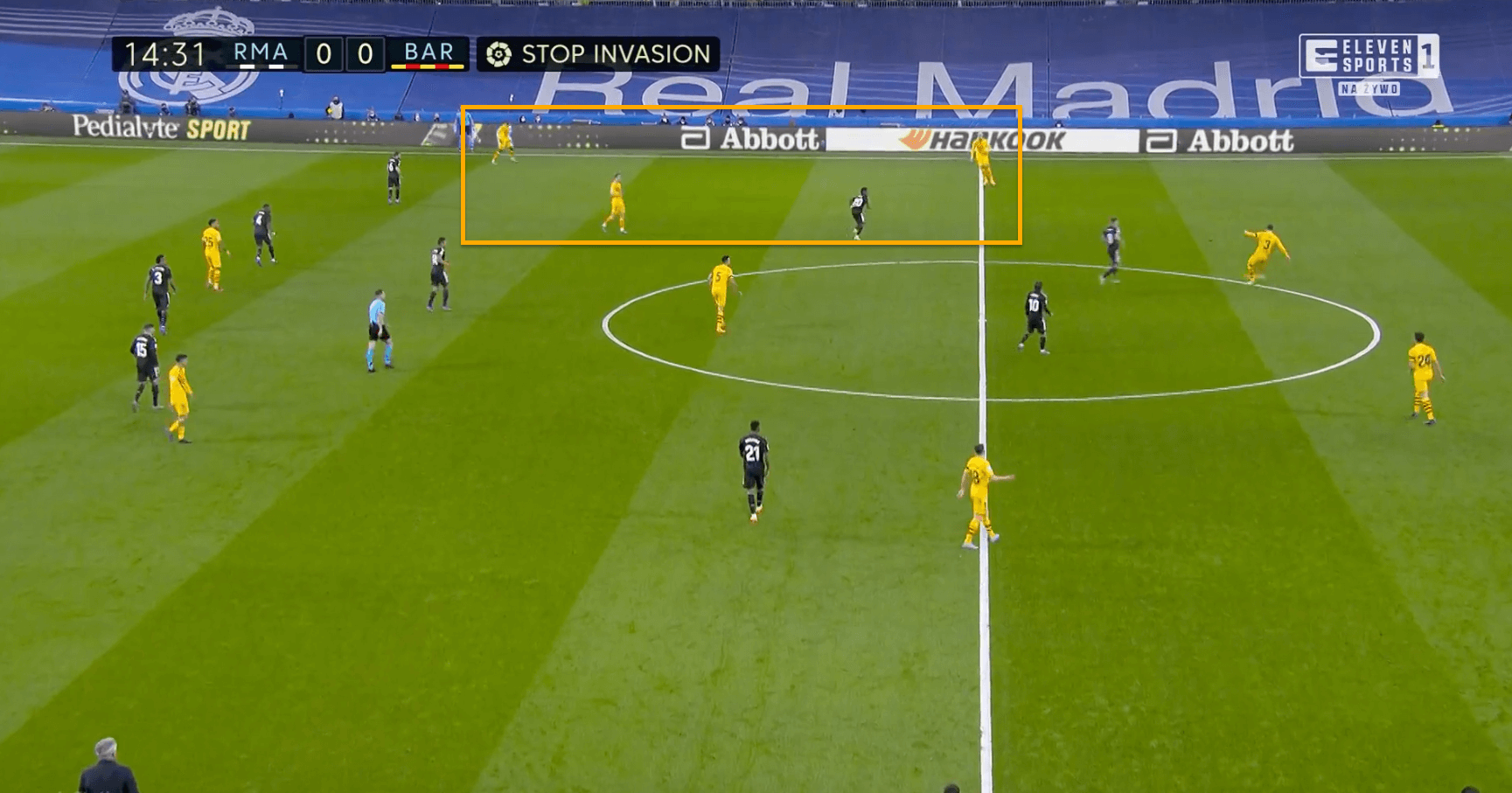 Another vital thing that would be game-changing in nature is the selection of the players. Though the team that played in the first leg was pretty much their first choice and suited to 3-4-3 if they had to change the system to a 3-5-2 then choosing the right players is very important. Especially given the options they have from which they can choose. For the front two, Havertz and Lukaku can start in one of the positions while Pulisic is a must for the other as his direct running and presence might be key for Chelsea. Havertz seems to be much better when it comes to holdup play despite Lukaku being very strong. He would be expected to play the Benzema role for his side and that would be really difficult for Real Madrid to handle. 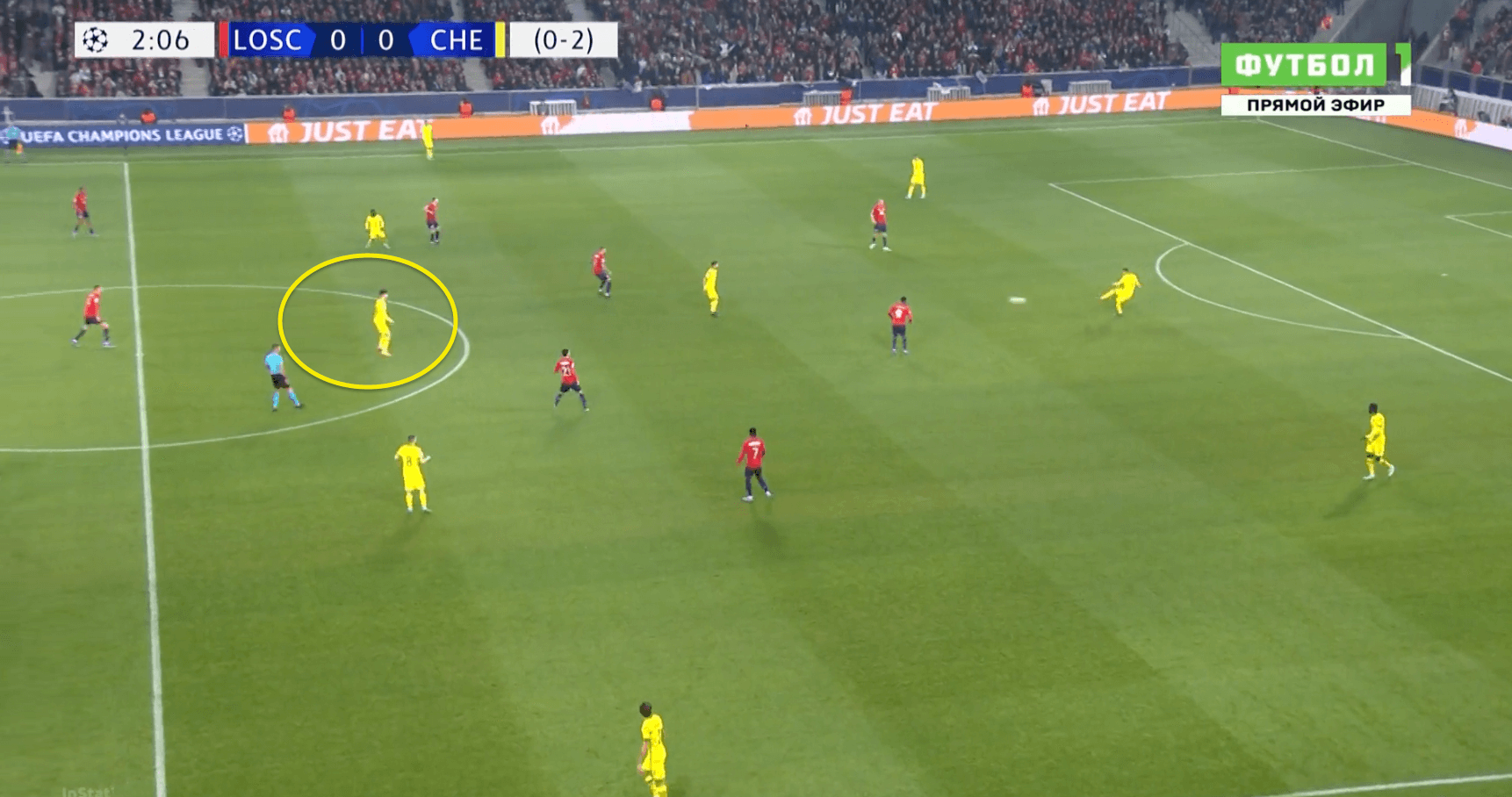 We can see Havertz playing that role in their win against Lille where we see the 3-5-2 that Chelsea are using and with Havertz they have overloaded the Lille midfield in a 4v3 manner. This could be repeated against Madrid too where Havertz dropping and getting himself involved in the build-up will be crucial to Chelsea’s chances going forward. But his presence in the box must also be used well as we saw him score the only goal for them in the first leg as seen in the image below. 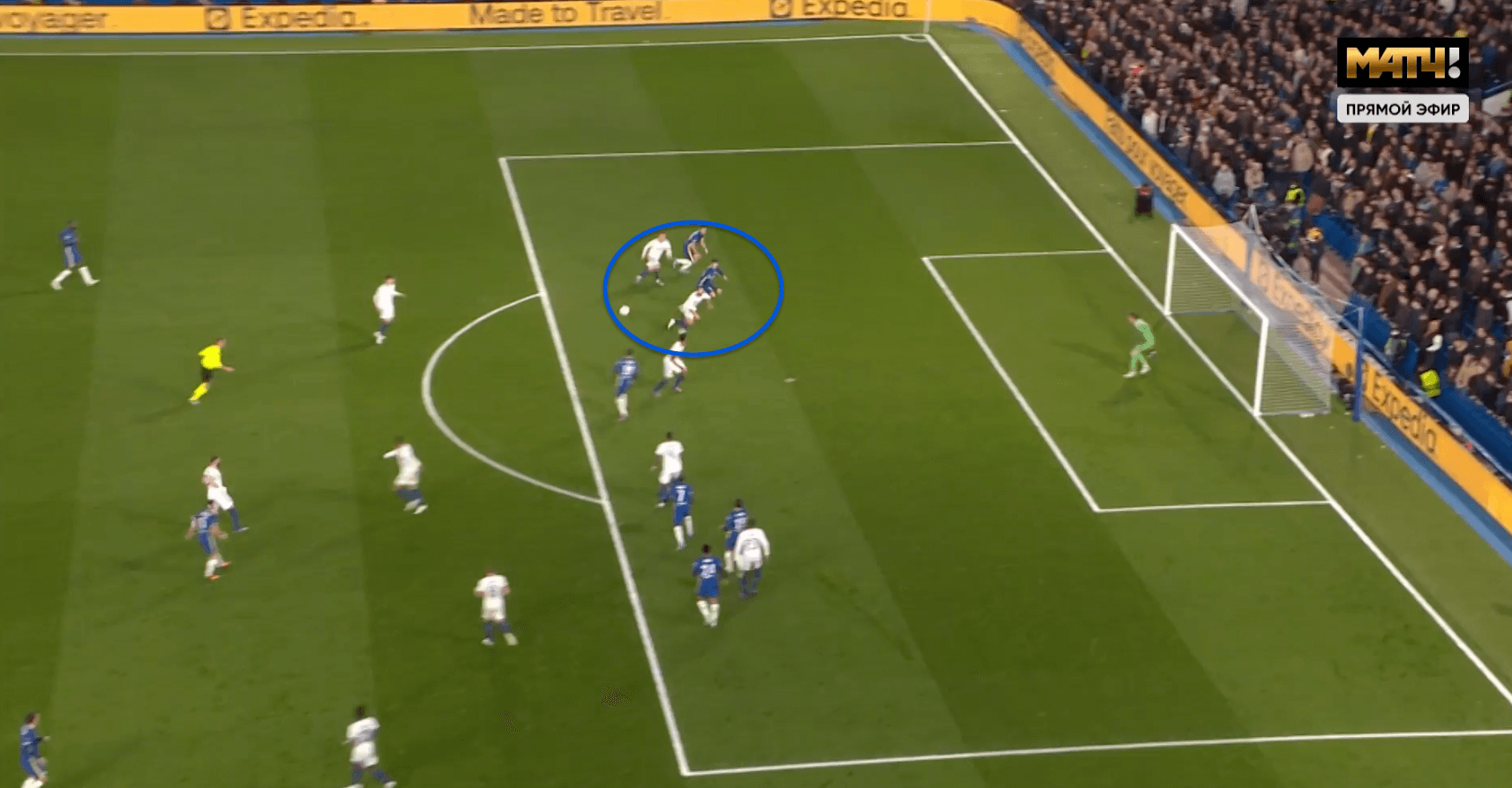 His presence in the last line will also be key where he is much more direct in terms of making runs in behind than Lukaku. If Chelsea wins the ball higher up the pitch then his forward movements after the second ball will be very crucial in terms of creating chances as seen in the image below. He offers the exact aerial presence as Lukaku while also being able to show much more variety of movements across the pitch makes him more valuable than the Belgian. 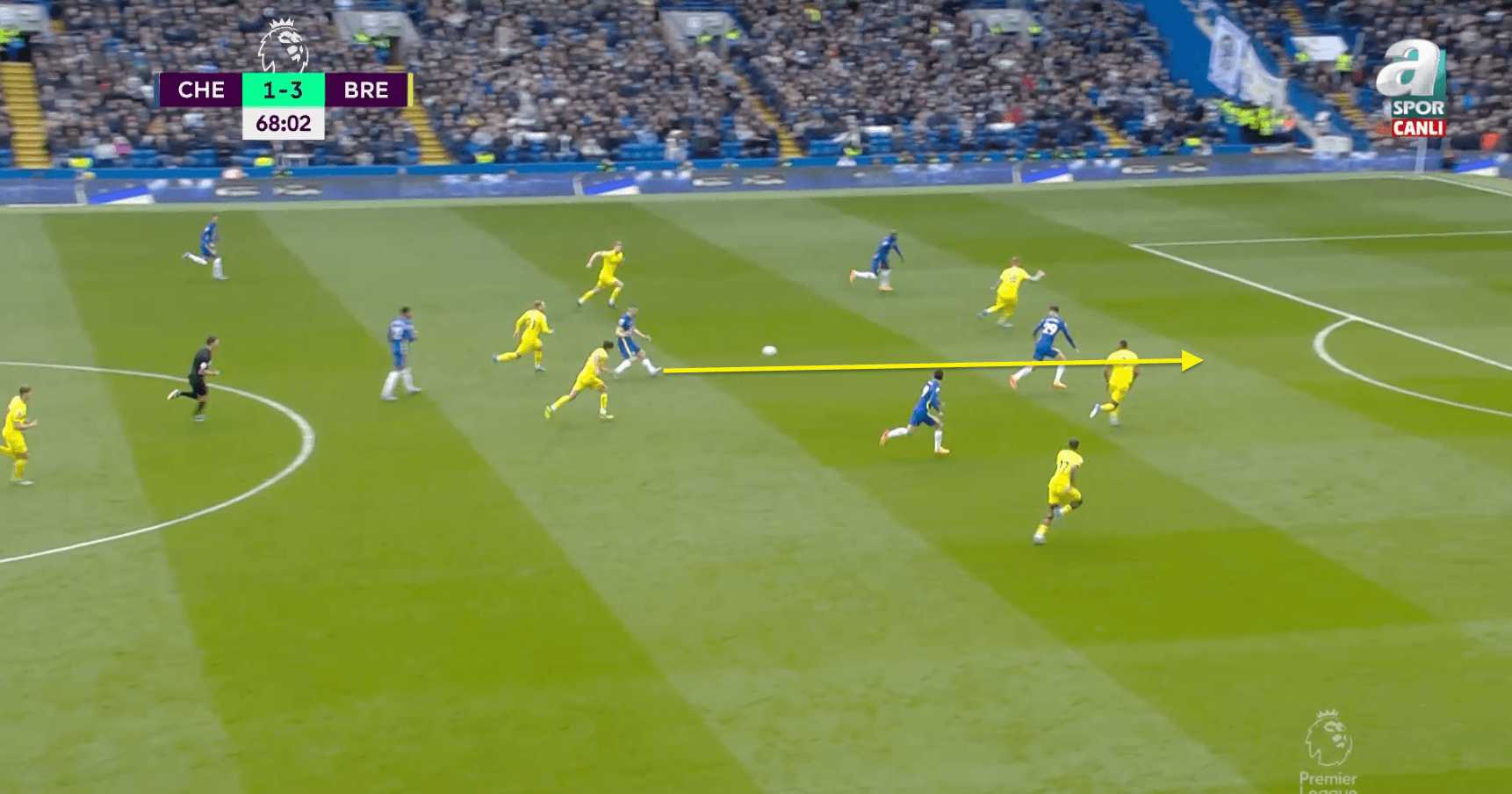 The inclusion of Pulisic is also key as they need someone to complement someone like Havertz or Lukaku (if he plays). Playing from the left, Pulisic can be used to exploit his pace and his directness on the pitch. The right side is one of Real Madrid’s weak sides defensively with Carvajal’s lack of pace being exploited multiple times this season. Barcelona constantly did that in their game against Real Madrid where Ferran Torres was used to exploiting the high line and space behind it consistently as in the image below. Direct long balls from Silva, Rudiger and Christensen can be used well in these instances. 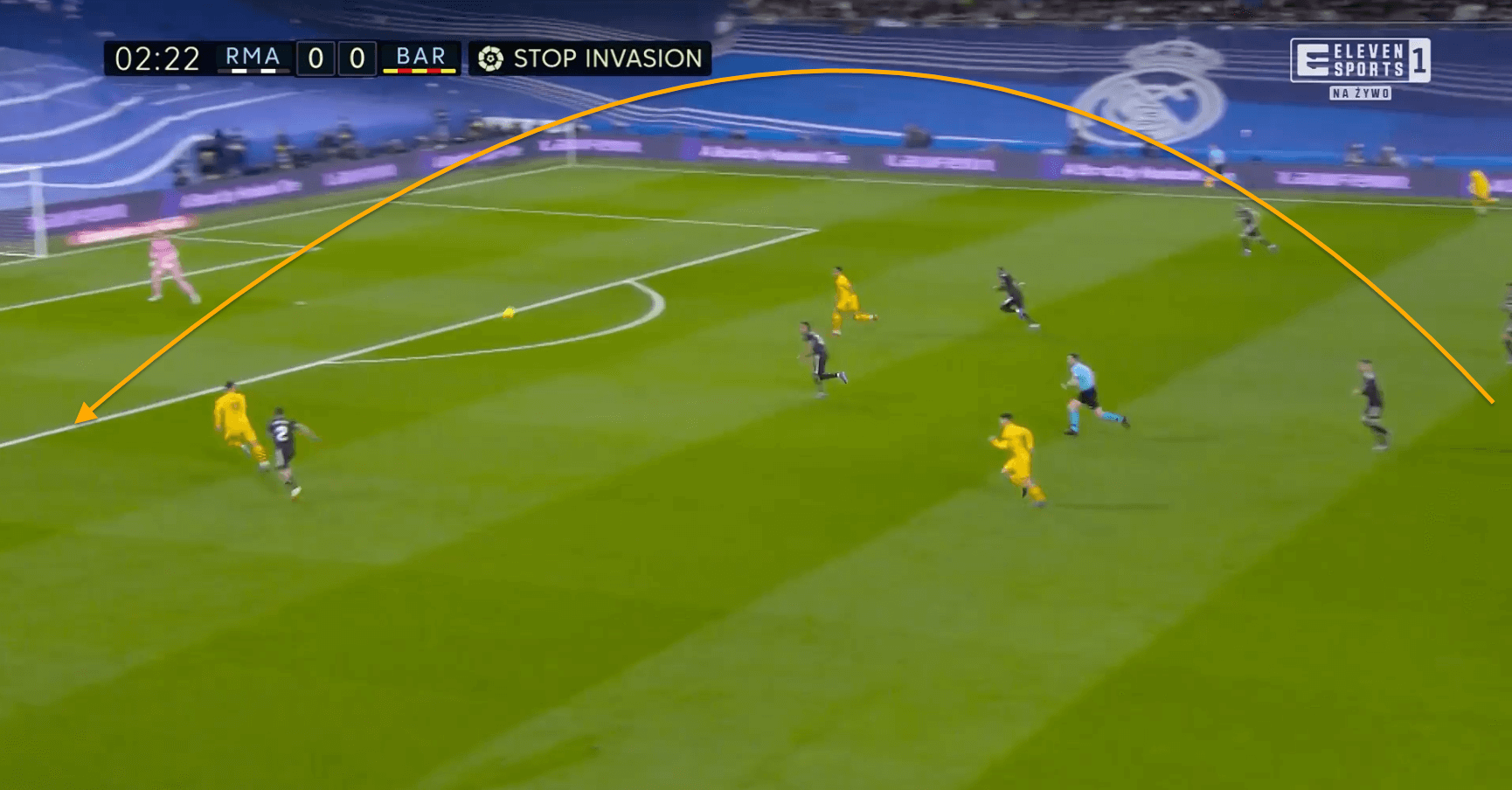 Another example showing Carvajal’s lack of pace is seen in the image below where Torres outruns him and receives the through ball from Busquets. This pattern can be consistently followed by Chelsea where Pulisic can run into the channels and Real Madrid will still not have a proper solution to this. 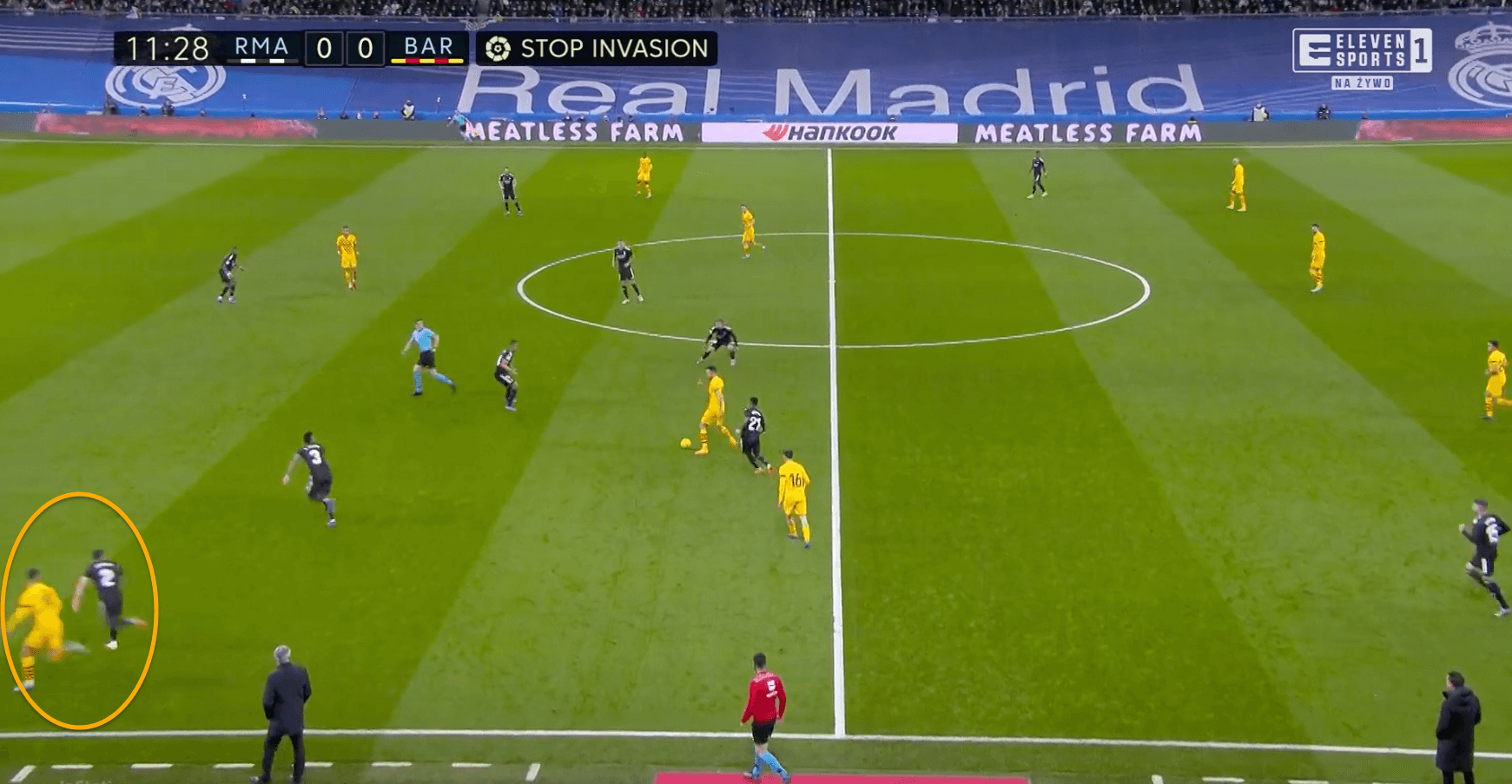 Jorginho and Kante are definitely going to start unless there is an injury but the 3rd midfield option is very much between Kovacic and Mount. Both are very good players who can play that position but Kovacic seems to be a slightly better fit if Chelsea are going to control the game further. The image below shows Barcelona using De Jong by asking him to move wide and also having Dembele make a run behind the defence. This strategy can also be used by Chelsea with Kovacic or Kante on either side while one of Pulisic or Havertz dropping into the wing and making a run behind. 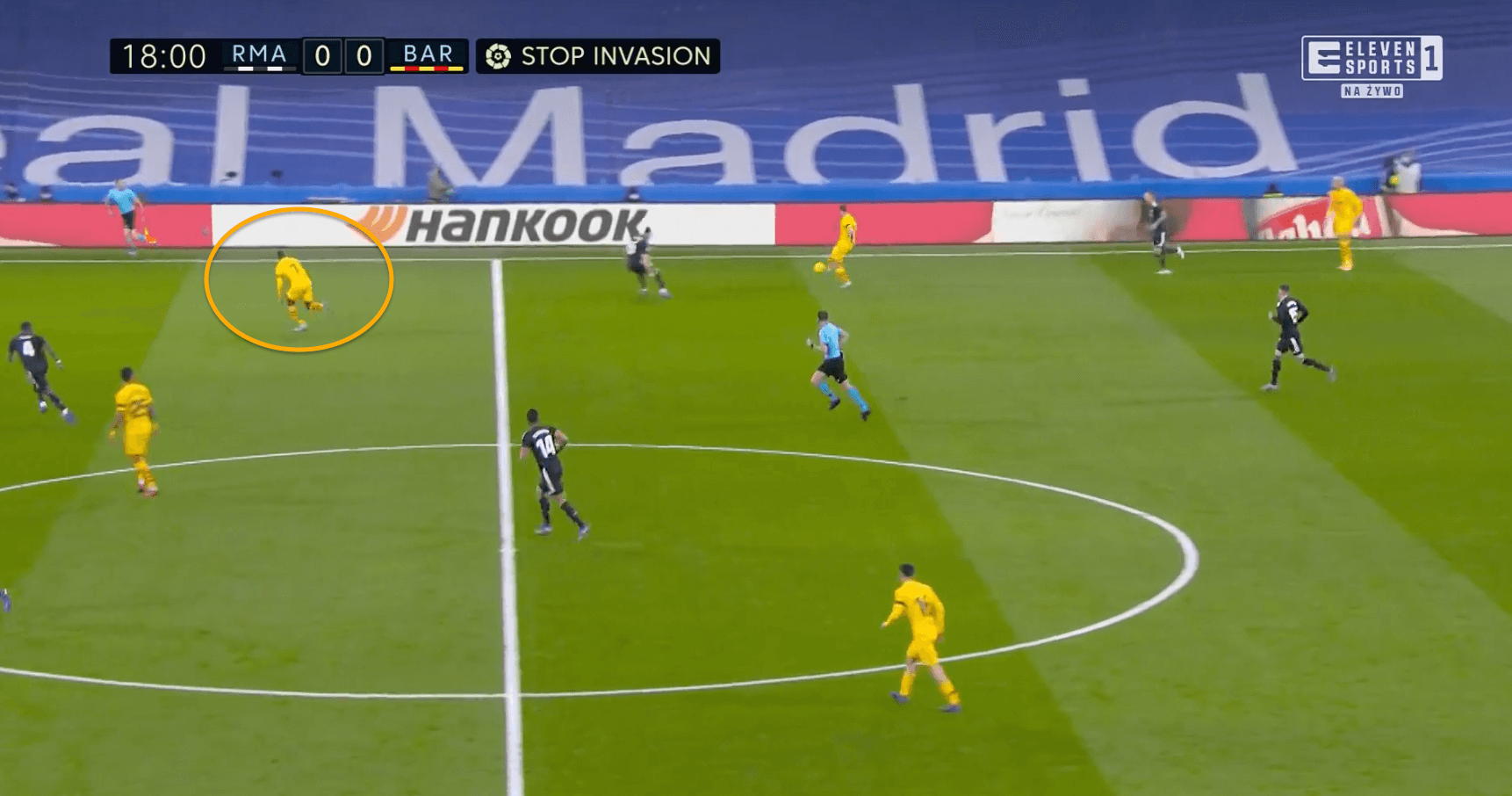 Though the challenge here would be the pinning of the Real Madrid defence where if one drops the other will have to stay higher to pin the defence but it will still not be enough at times with a 1v3 situation. So Chelsea should be really careful in approaching this tactic. But they can still use a 3rd man run where the deeper player makes a run instead of the winger and this can be specifically done on the Carvajal flank like how Barcelona have done it in the image below. 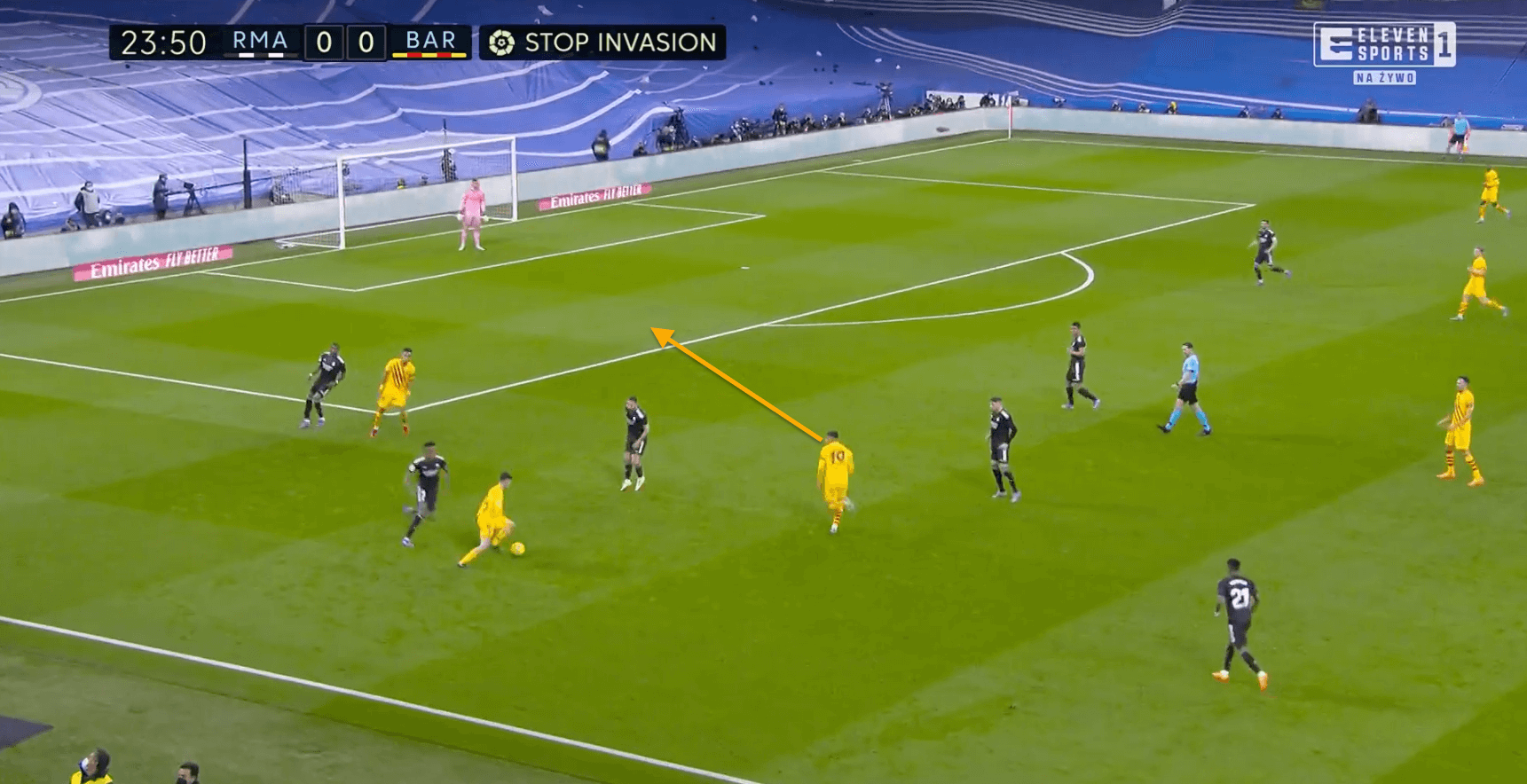 The change in formation would be an interesting but at the same time, an unsurprising change from Tuchel and also his team selection would be another important factor for Chelsea going into this game. Real Madrid looks to be in the driving seat and if away goals were still active then this tie would have been certainly done and dusted. The defending champions have the quality and experience to certainly turn the tie in their favour but would have to put on an exquisite display against the most successful European side.