Manchester United have enjoyed five straight wins under the leadership of Ole Gunnar Solskjaer but face their biggest test to date on Sunday. United will travel to Wembley for the clash with Tottenham Hotspur. Spurs are third, ten points ahead of United down in sixth, and looking to remain in touch with the top two. United will be hoping to continue making up ground on Chelsea and Arsenal just above them. This tactical analysis aims to preview the game from a tactical perspective.

The article will be broken into three sections:

Now let’s get into the three areas listed above where I think the game might be decided.

Manchester United have been very attacking under Solskjaer so far. One area of the game where they’ve really changed compared to Jose Mourinho’s setup is the roles of the two full-backs. While left-back Luke Shaw plays a controlled, narrow and possession-minded role, integral to the passing triangle we see below, Ashley Young at right-back has been extremely attacking. Young pushes all the way up down the right with the right-sided attacker, Jesse Lingard or Juan Mata, moving inside to play in the half-space or even in the central space. Young is, therefore, the sole wide option on United’s right and he positions himself very high. This has often created a shape looking like the graphic below. 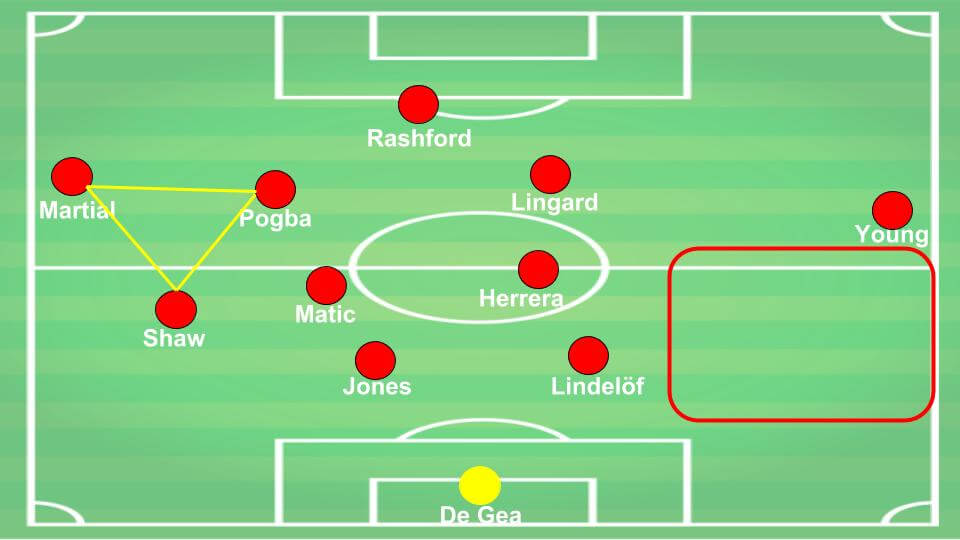 As you can see there’s a large space to attack behind Young and outside Victor Lindelöf if the ball is played into that space quickly. Huddersfield and Newcastle have already threatened with runs and passes into that area immediately when United have lost possession. Spurs, with the likes of Son and Lucas Moura, will surely be able to make United pay for it.

If Spurs defend in a 4-4-1-1, which might be their best option, then Son could start on the left of midfield and make runs into the space behind Young whenever Spurs win possession. He would probably get plenty of space to run at Lindelöf and would be a huge threat to United’s defence. 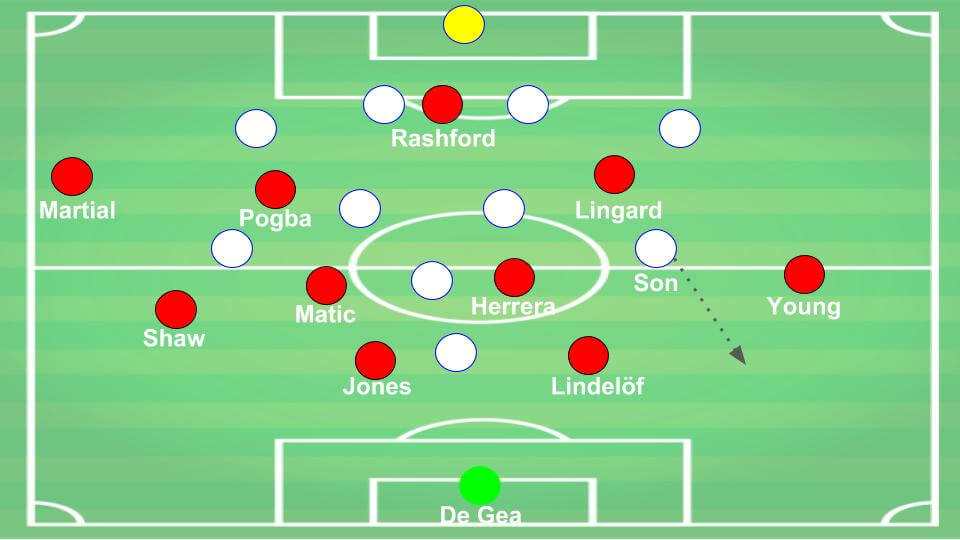 This seems an obvious weakness in United’s team. Surely Solskjaer and the coaching staff have seen the numerous dangerous counter-attacks United have faced down their right-side. This leads to me thinking United will look to deal with this weakness by playing Young slightly deeper, to begin with, as in the graphic below.

United will continue building their attacks on the left and then look to switch the play towards the right wing. Young can still be the wide outlet even if he starts slightly deeper and more narrow. He will have time to get out to the wing and receive switches of play. Lingard might also move a little wider to force Spurs’ left-back to stay infield, further leaving the wing free for Young to attack. By doing this, United could negate the threat posed by Son on the break. 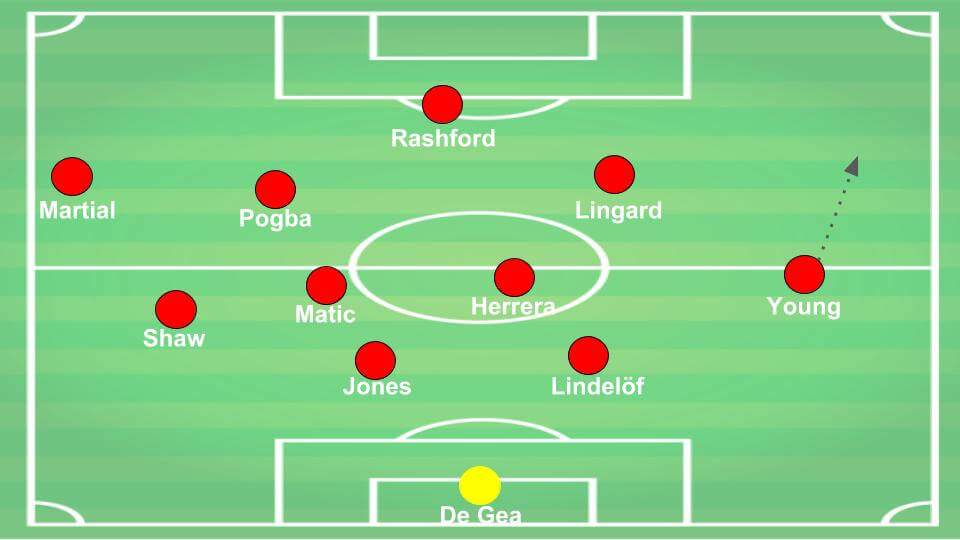 It will be interesting to see how this area of the game plays out. If United continue as they have previously, Tottenham will surely make them pay. If they change, they might manage to gain control of proceedings by stopping Tottenham’s lethal counter-attacks early.

How should Spurs defend against United’s left-sided threat?

As I’ve mentioned, United are strongly focused on building attacks through short-passing combinations on their left side. This was already evident in Solskjaer’s first game at Cardiff. The triangle of Shaw, Martial and Pogba, closely supported by Nemanja Matic, have been key to United’s attacking play. Lingard has often come across from the right and played in the centre with Young wide right. You can clearly see below how high Young has been positioned (as discussed above). 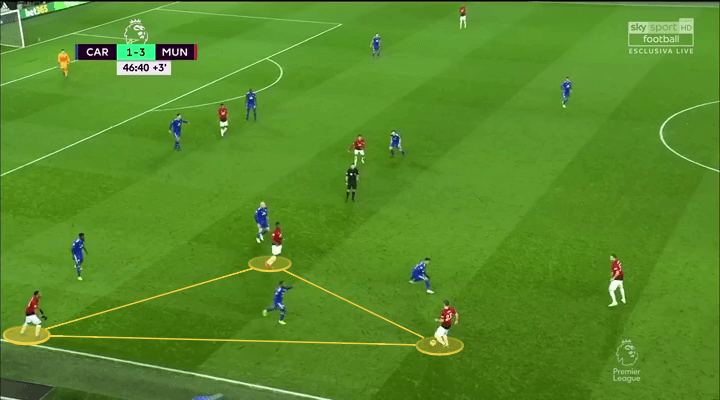 Cardiff defended this overload very badly. As you see below they have tried to overload with four against three United players. The right-back and the ball-near central midfielder (both yellow) went tight to Martial and Pogba. This opened a huge space for Lingard to run into. The positioning of Rashford (white) is also key. He stops the near-side central defender from going out to cover which keeps the space open. 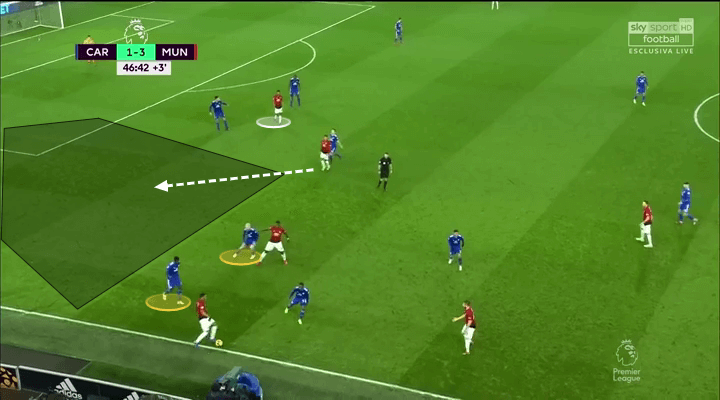 How should Tottenham stop United in this area then? The key is to not get into situations like the hypothetical one below. If United create a three vs two on the left, they can progress in behind the right-back either through a diagonal run by Pogba or via a run from Martial. Either of them running at a centre-back at pace is a very dangerous situation. 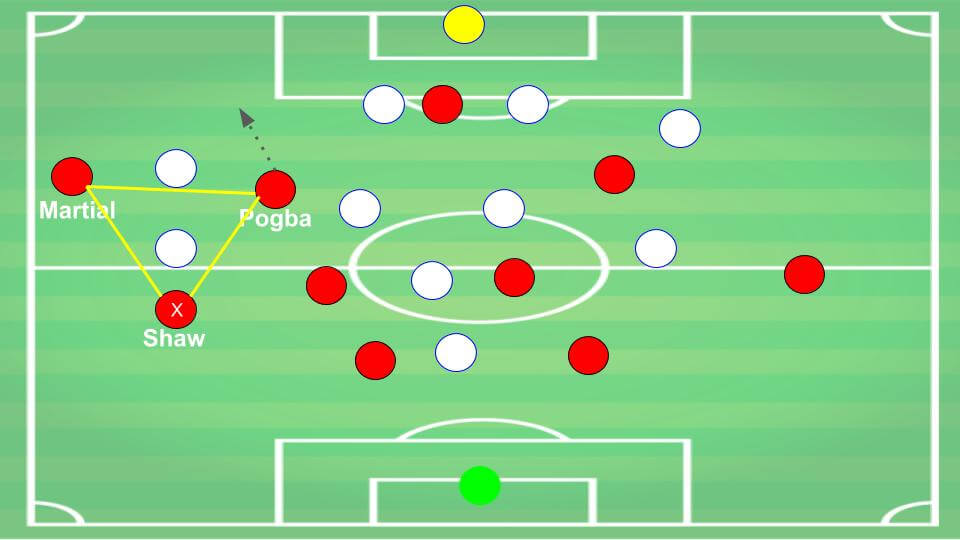 I feel the key for Tottenham will be to make strong overloads on their defensive right-side. Spurs defended with a flat midfield three away at Everton which left a lot of space in the wide areas from where Everton created two goals. This can’t happen against the quality of the players United have in this area of the pitch. I’ve created a potential defensive scenario below with Shaw in possession. If Spurs defend in a 4-4-1-1 and make strong overloads on the right to match United’s numbers then they have a great chance of restricting United’s joy down the left.

The right-back could get tight to Martial, Sissoko could have a big role to play against Pogba and Eriksen could play tight to Shaw. Alli could then move across to basically mark Matic and create a four vs four. If Kane also moves across to stop the back-pass to Jones then United will have no way out other than going into the channel. The closer center-back will, therefore, be forced to move across to provide cover for his teammates. Son/Lucas will still provide a counter-attacking threat on the opposite side. 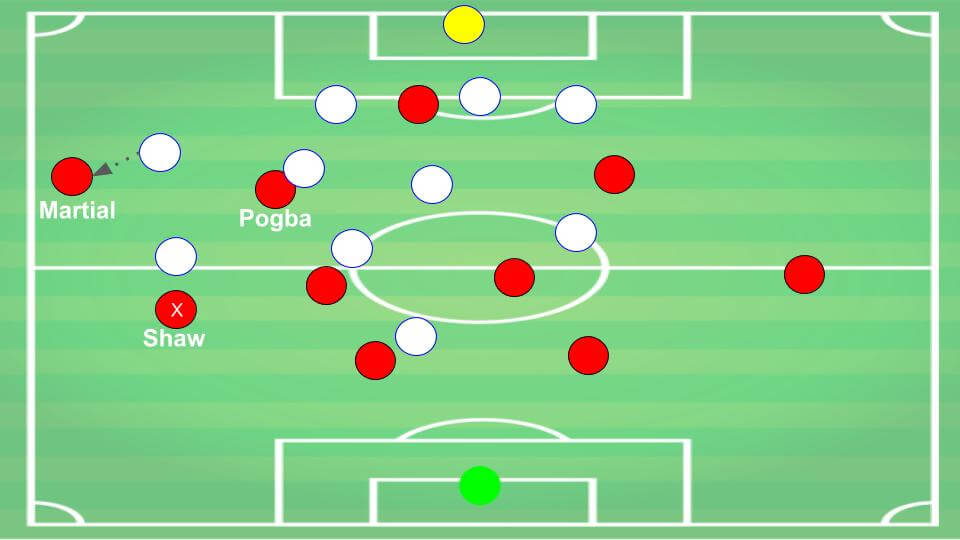 This has been the main principle of United’s attacking and if Tottenham can limit their success in this part of the field, then United haven’t had time to build enough other patterns to break through Spurs’ defence.

As you know by now, United are really strong down their left. By contrast, Spurs conceded three goals from their left against Wolves and Everton. The below image highlights the seconds before Gylfi Sigurdsson’s goal against Tottenham. The ball has just reached Everton’s left-winger. The right-back Trippier is quick out to press him. A huge space opens up between Trippier and Davinson Sanchez. That space would surely have been exposed by Paul Pogba who would have started in the position of the yellow circle. We can also see Tottenham defend with a flat midfield three. If they do that on Sunday then United might expose them. 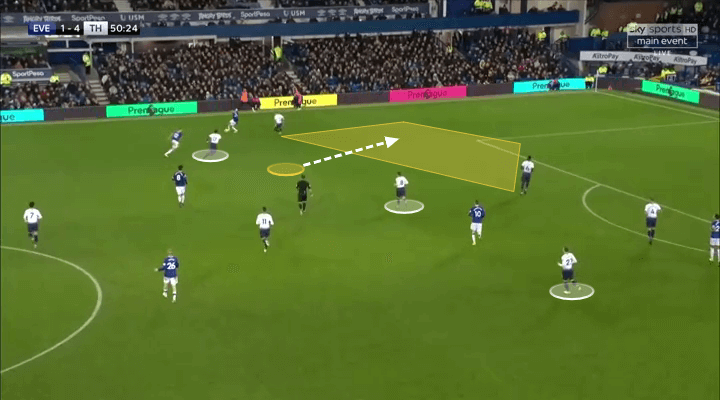 Against Wolves, Spurs were caught out in the build-up to Wolves second goal. Trippier finds himself alone vs two Wolves attackers. Again Spurs flat midfield three struggles to provide adequate cover for a full-back and they paid the price. Imagine if that will be Pogba and Martial running at the full-back. Spurs will have to defend this area better to deal with the multiple threats posed by United down the left. 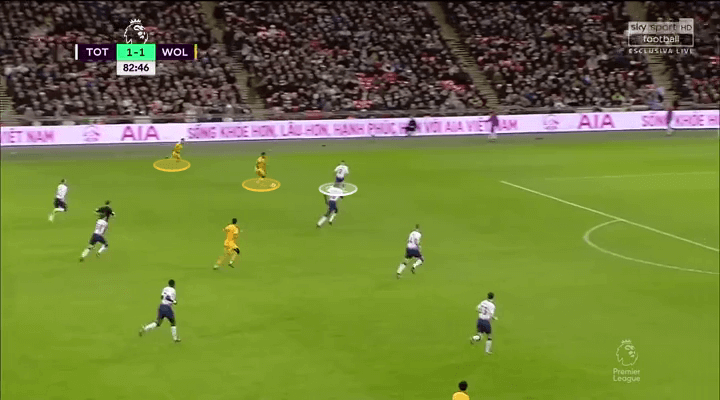 I don’t think Pochettino will play a midfield-three against United, instead probably opting for a 4-4-1-1 when defending. If not, however, United’s strong left could easily expose Tottenham’s right.

Another area which seems to be a weakness for Spurs is passes in behind their high defensive line. They conceded three goals at Arsenal from passes in behind. The image below, away at Everton, highlights another situation where they are easily beaten. Sigurdsson plays the ball into the space behind Sanchez into the run of Calvert-Lewin. Seconds later, Everton score. 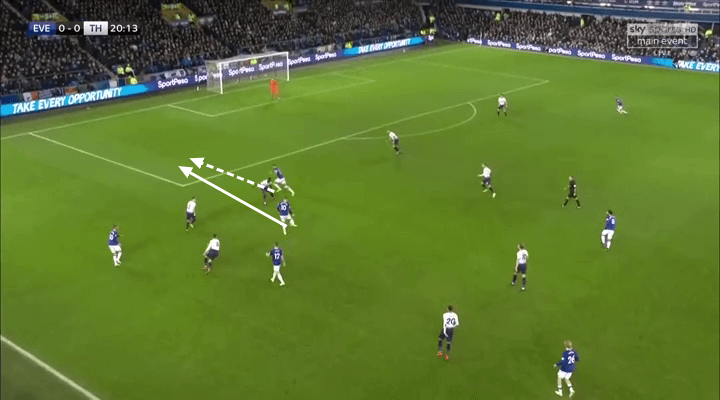 With Marcus Rashford and Jesse Lingard making runs in behind, United can really threaten Spurs there. Davinson Sanchez will probably play with his pace a real attribute needed for Spurs to match the runs of Rashford.

A third area United can possibly expose is crosses towards the back post from the right wing. As United will switch the play to the right wing, Young and Herrera will make crosses towards the back-post where Pogba will attack the ball. Can Trippier deal with him in the air? Sissoko will have a big role to play in order to match his compatriot’s physicality in the air.

The clash between the two teams will be interesting on many levels. More than anything, Mauricio Pochettino is strongly believed to be United’s main target to be the next permanent manager. On the opposite bench, Solskjaer will hope a win at Spurs might go a long way to stake his claim to be given the job permanently. The game also proves to be interesting from a tactical perspective. Can Spurs exploit United’s poorly covered right-side? Will United’s left-side break through Spurs defence? We’ll get the answer on Sunday.