After four straight league wins for Ole Gunnar Solskjaer over the festive period, he had a chance to rotate his squad for an extremely manageable tie in the FA Cup. Hosting Championship strugglers Reading FC at Old Trafford continued a relatively gentle introduction as interim manager. The visitors sit in 23rd place in the second tier, having earned just three points since the beginning of December. Poor Reading performances resulted in Paul Clement losing his job. His replacement Jose Gomes has prioritised league survival over an FA Cup run.

Manchester United laboured a bit, as several fringe players started. There were early issues with pressing and some of the attacking movements, but the performance improved as the game went along. A fifth straight win keeps the momentum going for the Norwegian, while also allowing him to rest some of his key players after a busy two weeks of fixtures. In addition, it has given him a chance to play some of his back-up options and players returning from injuries. 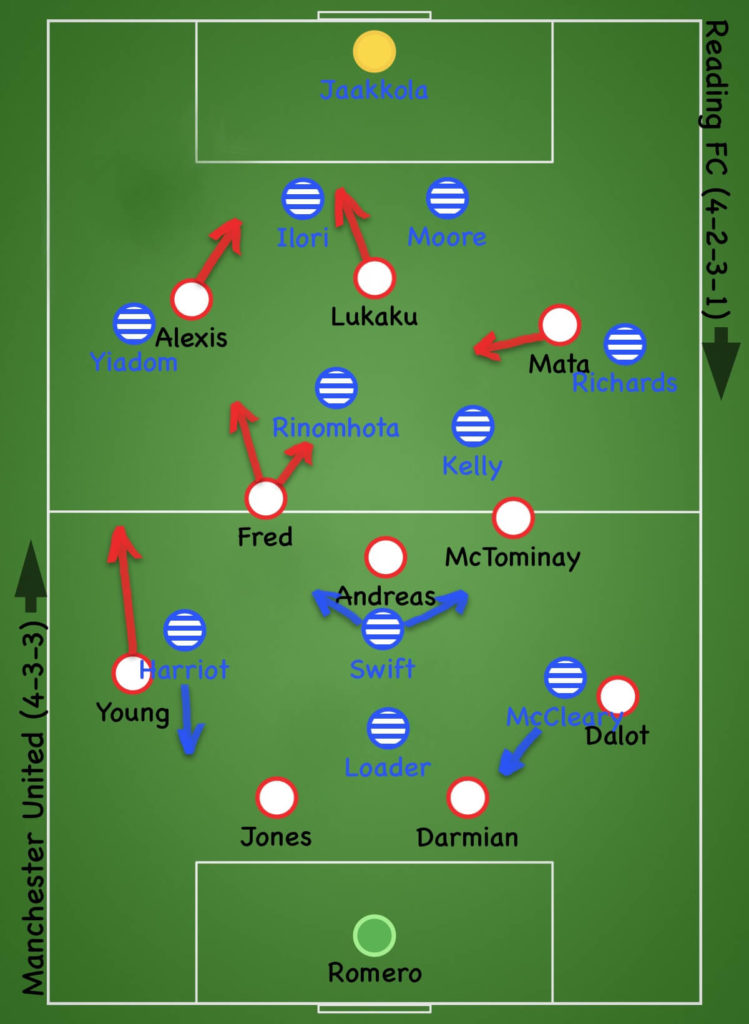 Jose Gomes stuck with the 4-2-3-1 which he has used in most of his games in charge. However, he made four changes from the side that had lost 4-1 at home against Swansea. Most interestingly, 18-year old academy product Daniel Loader started as the central striker. Former Manchester United player John O’Shea dropped to the bench, replaced at centre-back by Liam Moore.

Manchester United made nine changes from the side that had beaten Newcastle United 2-0 three days earlier. Romelu Lukaku got his first start under Solskjaer, joined by Alexis Sanchez who had been out injured. The midfield three consisted of Fred, Andreas Pereira, and Scott McTominay. Matteo Darmian also got a rare start as the right-sided centre-back in a back four.

This match provided a chance for many of the fringe players in United’s squad to get a run-out. In the early parts of this match, it was easy to see that this group was unfamiliar with each other. This was most obvious as they tried to press Reading. Under the interim manager, Manchester United have opted to press much higher up the pitch than they did under Jose Mourinho.

While this has worked well with the first team, these fringe players struggle to apply consistent pressure and close off easy passing options. It’s not unexpected, as Solskjaer has had limited practice time during a busy fixture list with matches coming every three days.

As United forwards tried to apply pressure on the Royals’ back line, you could see the trouble that the midfield had in closing off the passing lanes and stopping Reading from playing around the pressure.

The most common escape for Reading was for Harriott to drop deeper and receive the ball from the right-back or centre-backs. In the 13th minute, during a stoppage, you could see Alexis Sanchez speaking with Ashley Young and urging him to apply pressure on the Reading winger.

As the first half went along, United’s pressing got better and started causing problems for Reading. They were increasingly reduced to long balls up towards an 18-year-old striker who was poorly suited to winning aerial duels. Reading had a majority of the possession, but after the opening 20 minutes of the match, they struggled to progress the ball up the pitch. Soon, they lacked any meaningful connection between defence and attack.

We have seen Romelu Lukaku making contributions off the bench since the firing of Jose Mourinho, but this was our first chance to see him start under Ole Gunnar Solskjaer. Under the Portuguese manager, we saw Lukaku become an increasingly solitary figure up front for United. He was asked to play with his back to goal, and try to hold the ball up until the attacking midfielders could support him. While capable of this type of play, this isn’t using him to the best effect as Belgium have figured out.

In this game, he was being asked to provide more runs in behind the defensive line. His goal in first-half stoppage time came from this type of movement, as he made a well-timed run in behind former Liverpool defender Tiago Ilori. While a strong physical specimen, the Belgian striker does have an impressive turn of pace and made this type of run several times.

The runs behind gives Lukaku more of a chance to use his pace, while also minimising his sometimes frustratingly poor first touch. In addition, it also has the benefit of pushing the opposing defensive line back. In turn, this gives more space behind the lines for a midfielder or attacker to drift into. We’ve seen this in previous games where Rashford’s runs have opened space for Lingard and Pogba to operate in. It was visible in this game as Mata, and to a lesser extent Fred, moved into the space as Lukaku pushed the centre-backs deeper.

Romelu Lukaku has also benefited from support higher up the pitch. With more pressing from United, it means that the wingers aren’t immediately dropped into a deeper block to defend. This has meant that during counter-attacks, Lukaku isn’t as isolated as he had become under Mourinho. With additional support, Lukaku is able to combine with his wingers and get up the pitch quicker.

A 2-0 win over a team struggling in the relegation zone of the Championship was never going to be the most insightful. However, being able to win while not playing at their best is something we haven’t seen of late. The Norwegian was able to use some of his fringe players, giving them playing time while also resting most of his first team members ahead of a training camp in the Middle East.

It was disappointing seeing Alexis Sanchez leave the game injured, as he tries to establish himself under the new management,. He played well during his hour on the pitch though, being much more suited to a pressing game than the deeper defensive block of Mourinho. A fifth straight win helps Manchester United maintain momentum leading to Ole Gunnar Solskjaer’s biggest test so far: a visit to Wembley Stadium to play third–place Tottenham Hotspur.