Manchester City take on Watford in the FA Cup Final this evening. Although the cup competition is not as prestigious as it once was, it is still one of the most coveted prizes in England and all eyes will be at Wembley as this will be the final major match before the 2018/19 season is over for both teams.

Manchester City needs no introduction. Coming off the back of defending their league title against Liverpool and being crowned the kings of England for the second successive season, they’re clear favourites for this competition as well against a side 48 points behind them. Although City haven’t won the FA Cup since 2011, it’s difficult to look past the Manchester side to see the winners. City will be aiming for their first domestic treble and it would be a deserved end to another historic season under Pep Guardiola.

Watford on the other hand, have also enjoyed a quietly respectable season. Under the tactically astute Javi Gracia, they’ve solidified their mid-table position and tried to carve out their own identity. The season petered out for them in an unconvincing manner – three losses and one draw in the last four matches – their cup form has been impeccable. They produced an inspiring performance against Wolves in the semi-finals and have proven themselves to be worthy cup-challengers. How well can they perform against one of the best sides in the history of the Premier League? In this tactical analysis, we’ll attempt to answer that question from a tactical perspective, looking into what will be key elements of the game as well as the major battles between the players as well as the coaches.

Both managers have a lot to be happy for in terms of returning personnel from injury and will be able to pick from an almost full squad. Fernandinho is expected to return to the line-ups after his knee injury during the Manchester derby. Kevin de Bruyne is also expected to be fit and ready for selection as both players were seen training mid-week. Benjamin Mendy, however, will be out as he’s travelling to Barcelona for a check-up on his knee surgery he undertook last season.

Watford have successfully appealed against the red card shown against José Holebas in their clash with West Ham United. It was awarded for him pulling on Michail Antonio to prevent him from getting into a 1v1 with the goalkeeper during a counter-attack. Defensive-midfielder Étienne Capoue has also returned and so has forward Gerard Deulofeu (who’ll be key to the Watford attack).

Both coaches are known for their tactical intelligence and both of them favour unchanging starting line-ups keeping the changes to a minimum. This is evident in how they’ve not wavered from their preferred formations through-out the season. Manchester City have lined up in a 4-3-3 almost invariably during the entire season. Gracia has also found his ideal Watford formation with a 4-4-2 which morphs into a 4-2-2-2.

Considering all of the above, this is what we feel should be the starting eleven for both teams – 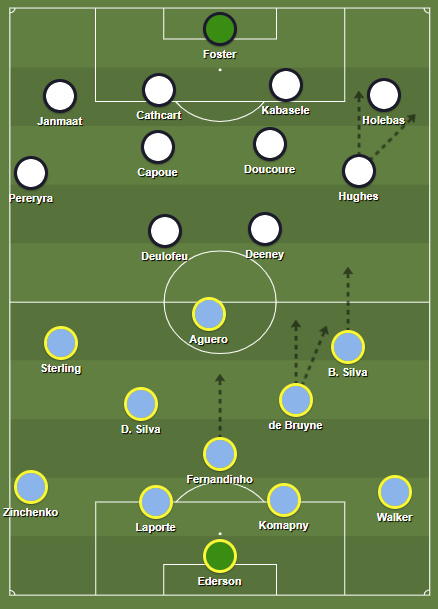 It wouldn’t be an absurd claim to say that Manchester City are going to dominate possession. With an average possession percentage of 64%, they’re the highest in the league this season in that regard as well as the team with the highest average pass completion rate at 89%. Watford themselves are better with the ball than they’re without it but Gracia usually adopts more pragmatic game-plans for clashes with the top four sides. Hence, it will be imperative for Gracia that his defensive organisation and discipline is flawless.

In the last meeting between both teams, City won 3-1 due to a Raheem Sterling hat-trick in the second half. However, it is worth noticing that Watford defended very well without the ball in the first half and limited City to only seven shots with four off target and five coming from outside of the box.

How did they manage to do this? Watford defended in a very low-block. Their defensive shape sometimes looked like a 6-4 with no forwards as is seen in this picture below.

This allowed for good coverage of the pitch horizontally which is essential because Guardiola looks to stretch defences with his wide players to create gaps in defences which he can then exploit in a variety of ways (which we’ll discuss in the next section).

Watford’s six-man backline was able to deal with overloads on the flanks very well (at least in the first half). They had the wingers supporting their full-backs out of possession and, as seen below, this neutralized the superiority created on the flanks. Usually, teams have to move their entire back-line to cope with the overloads on the wings but since Watford had their wingers move out wide, their centre-backs and ball-far full-backs didn’t need to tuck in centrally. Manchester City usually expects this movement as this opens up opportunities for long diagonal switch balls in behind. The forwards also helped in pressing as they move to the over-loaded area and cover the passing lane to the inner midfielders. This ensured that the only pass left was the one back to the centre-back. Due to this, Nicolás Otamendi was the player with the maximum number of touches in the first half. Watford’s forwards left Otamendi alone and instead zonally marked the centre of the field as well as the passing lanes into the central midfielders. As the Argentine defender was allowed to move up the pitch on frequent occasions he found no passing options and had to pass back.

The central overloads were defended equally well. The double pivot’s job was manifold out-of-possession. Their most important job was protecting their centre-backs. The communication between the centre-backs and the defensive midfielders will again be key due to Agüero. He frequently likes to drop in between the lines to pull his marker and create space for the winger to drive into. In addition to that, the double pivot has the extra responsibility of man-marking the higher positioned central midfielders of City. They had to defend the channels as those are the spaces Manchester City’s eights (central midfielders) thrive in. Furthermore, they also had to move out wide in case the ball was with the wingers for a sustained period of time. In those cases, one of the midfielders would move out while the other would stay central – offering support and maintaining the structure.

Manchester City’s 4-3-3 usually turns into a 4-1-5 as they look to overload the opponent’s defensive line with their wingers, striker, and the attacking number eights. This pins them backwards and ensures that City can dictate the flow of the game. The defensive midfielder in the centre (Fernandinho or Gündoğan) is helped out by the full-backs who usually invert to provide defensive stability and the license for the midfielders to move higher up the half-spaces. Building out from the back will not be a problem as Watford seldom press very high, and will be more careful against the league champions. Instead, they’ll look to stay compact and allow City in their half but make it difficult for them to create clear-cut chances.

Once City are in the final third, they employ a variety of different methods to create chances. They either try to overload the flank or play centrally via the dropping movements of Agüero – which triggers a counter-movement by the winger to run in behind. This worked very well against Watford the last time the two sides met as Sterling was frequently able to make runs in behind Daryl Janmaat, the Watford right-back.

This was even more effective in the second half because City tried to tempt Watford to move up the pitch and press them. This created gaps as seen in the image below. Notice how Watford’s block is much less compact compared to before and this allowed City some room to breathe in between lines. It also allowed for long balls over the top to the right-winger.

Watford are by no means a counter-attacking team but against City they well might turn to more direct means to score goals. Watford employ a perfect mix of physicality and technicality to achieve quick progression through the thirds. The goal-keeper, Ben Foster, usually goes long and aims those balls at Troy Deeney. Deeney is superb with his back to the goal and can lay off balls to the surrounding midfielders who usually expect them and strategically surround him or stay in close proximity. This is then helped by the ball-carrying ability of Deulofue, a very intelligent and press-resistant dribbler. This is further evident by the fact that Watford are seventh in the league (and higher than Tottenham) when it comes to completing deep passes – or passes within eighteen yards of the opponent’s goal.

Watford’s 4-4-2 also sees its wingers invert inside to create a box in midfield. This is for a number of reasons. Firstly, it allows them to win back second balls and this will be crucial against City as this is one of the few areas where Watford hold the edge against City. Secondly, it draws the full-backs inside and opens up the flank for the full-back to overlap. This also helps them to counter-press effectively as they can use the central overloads to deny their opponents any chance to progress the ball through the middle. This was seen in effect against Chelsea where the Blues frequently struggled to break the Hornets’ press.

Both managers had much to learn from their previous encounter. Gracia gave a taste of how to defend well against Manchester City and will look to perfect that game-plan at Wembley. Guardiola also knows how to break down Watford as he’ll look to bring Watford out of their own shell in order to use the spaces left behind. The main battle, and indeed where Watford may shock City, is during offensive transitions as City mostly concede a major share of their goals during fast breaks. Watford’s defenders will have to be tuned in during the entire match as any lapse in concentration will not go unpunished (as it wasn’t the last time). The neutral viewers are in for an exciting end-of-season clash and we expect plenty of drama to go around for the 138th FA Cup Final.