With Aston Villa beating West Brom on penalties to confirm their place at Wembley for the play-off final it was down to Leeds and Derby to contest who will play them. It has been a rivalry this season which has been intensified by Spygate, but Marcelo Bielsa has won three out of three against Lampard’s side this season. At a loud Elland Road, Lampard got his tactics right in the second half and sent his side to Wembley. In this tactical analysis, we will look at how the rams edged closer to the Premier League. 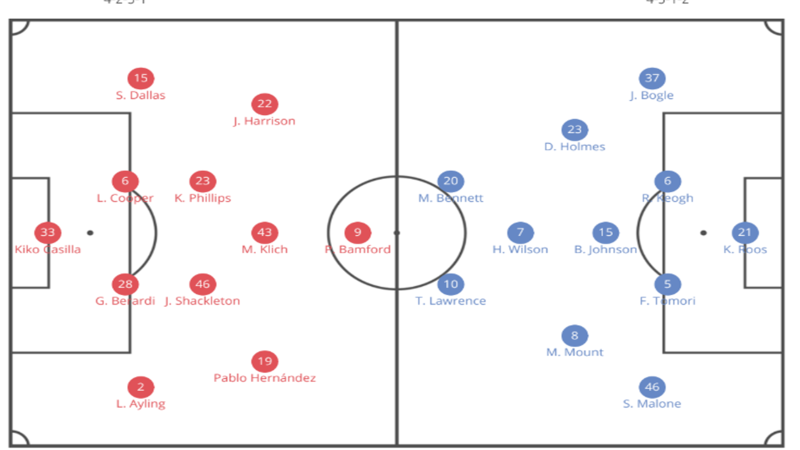 Bielsa went for a 4-2-3-1 with full-backs Stuart Dallas and Luke Ayling being essential to his plan. Leeds had Jamie Shackleton and Kalvin Phillips in the midfield with former Derby loanee Patrick Bamford starting up front. Lampard decided to play in a 4-3-1-2 with the midfield four playing as a diamond. On-loan Liverpool striker Harry Wilson played in the number ten role with Mason Mount playing in midfield. There was also an inclusion of Mason Bennett who’s physical presence could challenge the Leeds defence.

In the first leg, Derby were guilty of playing out from the back. However, in the second leg, Lampard decided to play more direct football in behind the Leeds backline. You can see from the below image that how high the Leeds forward line pressed when Derby had the ball deep in their own half. This led Derby to have little passing options, so they played the ball long.

The problem with this tactic for Bielsa is the space between the pressing unit and the defensive unit. When teams try to play out from the back against Leeds they tend to keep compact and it is really hard to play through. This is shown in the image below, Leeds make the space that Derby have on the ball small and hard for them to trouble Leeds.

However, when Derby went direct the space was a lot bigger which it made it easier for Derby to expose. Lampard’s inclusion of Mason Bennett would have been certainly for this reason as his physicality would challenge the Leeds defence in the air. The image below shows the space between the two defensive lines of Leeds, creating a two v two in the final third for Derby direct from the goal kick.

Bielsa would have challenged goalkeeper Francisco Casilla to be a sweeper keeper in this game. The idea would be that he could sweep up any balls which go in behind the Leeds defensive line. It can be seen in the below image.

This at times worked successfully for Leeds, but their defensive shape was not the best for a sweeper keeper. If you look at the image above of the Leeds shape when defending the long ball their backline is too deep. This created problems for Leeds as firstly it allowed the Derby strikers to get high up the pitch in an onside position. This then created confusion between Casilla and his defenders as the gap between them is too small. This can be shown below in the lead up for Derby’s equaliser. It comes from Casilla being too eager to rush outside the box which confuses his defenders and gives Jack Marriot an open goal with his first touch of the game.

The two best players for Leeds on the night were their full-backs, Stuart Dallas and Luke Ayling. Their commitment to the attack, creating overloads in the final third and both Leeds goals were scored by Dallas. Looking at Ayling he used a very good combination play in order to get up the pitch and have opportunities on goal. In the image below you can see Ayling plays a simple pass but then makes a run to the centre of the penalty area. This created an overload in the penalty area which meant his run was unmarked which gave him a brilliant chance to score.

Another chance fell for Ayling as he continued to try and cut inside the penalty area. Another way he did this was via combination play inside the Derby penalty area. The height that the Leeds full-backs give helps them get out of tight situations in wide areas of the pitch so they can play the ball more centrally. Ayling’s one-two, which can be seen below, gets Leeds out of a compact corner of the pitch and create an effort on goal.

Similar movements were created by Dallas at left-back who scored two goals in the game. His first came from a free kick. It’s a great ball from Kalvin Phillips which is narrowly missed by Liam Cooper with his head and hits the post, but it is Dallas who is most aware of the situation and follows in the chance for a tap in.

Dallas’ second goal came from a fantastic overlapping run, similar to what Ayling was doing on the right-hand side, and this created an overload on the left. Jack Harrison played the ball into Mateusz Klich who made a central run joined by Dallas. When Klich receives the ball he sets up Dallas who steps inside like Ayling but his finish is superb and he places the ball in the bottom right corner.

Gaps in the midfield

In the game, Leeds had 16 chances on goal and Derby had 10. This was due to the fact that there were massive gaps in the midfield for both teams. This increased the transition time for either side and created a game with a ping-pong effect. When defender Gaetano Berardi received his second yellow card, the game began even more open. The image below shows the amount of space available in the centre when Leeds transitioned on the counter-attack.

The winner was similar through Marriot. Richard Keogh steps up brilliantly to gain back possession. When he wins the ball he plays it simple but carries on his run into Zone 14, similar to Wilson. When he receives the ball, he plays in Marriot on the right who dinks the ball yet again over Casilla and send Derby to Wembley.

These three Derby goals and a penalty for Harry Wilson were enough to send Derby through to their first play-off final in five years. They will face an Aston Villa side who beat West Brom on penalties on Tuesday night. With many key Derby players such as Mason Mount and Harry Wilson returning to their parent clubs this summer, it will be interesting to see the standard of Derby next season if they do make the Premier League. As for Leeds, the impact that Bielsa has had on them has been superb and they are unlucky not to gain promotion this season, we will have to see if Bielsa will give it another chance on sending Leeds back to the top of English Football.