Atalanta host Napoli in the 31st round of Serie A in an important game for both teams. La Dea are still hoping to reach a Champions League spot, while Napoli, despite being three points behind Milan, still have a chance to win the Scudetto for the first time since 1990.

A few poor results against the top teams put Atalanta’s qualification for the European competitions on a map as they currently sit sixth in the table, eight points behind the fourth Juventus and nine points behind the third Inter.

Napoli, on the other side, cannot afford to lose this game if they want to remain in the title battle as a potential six-point gap might be impossible to close in the last nine games of the season. Luciano Spalletti managed to keep his team in the loop with a balanced performance in and out of possession that allowed them to dream big.

Gian Piero Gasperini has to show that he still has the ability to step up against the top teams and outwit them tactically if he wants to keep La Dea’s “top team” status in Serie A.

In this preview, we will use tactical analysis to explain how both teams could expose each other and what is it in Gasperini’s tactics that Spalletti needs to be careful about.

Atalanta could threaten Napoli in many ways and Spalletti should consider a few players’ movement in order to avoid any unexpected threats in front of Napoli’s goal.

La Dea are known for their short pass combinations and creativity in attack but while they rely on through balls and smart balls to break through defences and expose the opposition, their ability to exploit spaces and create opportunities from distance should not be underestimated.

is proficient in creating goalscoring chances from outside the box. His strong positioning allows him to take advantage of such opportunities and he increases the team’s explosiveness in attack. His occupation of the half-spaces often puts him into a quality position to catch the opposition off guard and shoot, although he is the most efficient when he moves centrally.

He is not Atalanta’s only weapon when it comes to shots from distance. Teun Koopmeiners settled pretty well and developed into one of the team’s key players in possession. Napoli should put effort into limiting his movement in midfield as his actions are crucial for Atalanta’s ball progression. Spalletti’s side need to increase their positional awareness as the Dutch player combines well with his teammates and constantly supports the attacking actions.

While they need to pressurize him in midfield, it might turn out even more important to cover him tightly around the box. The midfielder moves into an advanced position rather frequently and often offers a passing option on the edge of the box. His spatial awareness and attacking flair make him a direct threat to the goal as he has the ability to exploit spaces and doesn’t hesitate to shoot as well. That often results in him creating chances from distance. 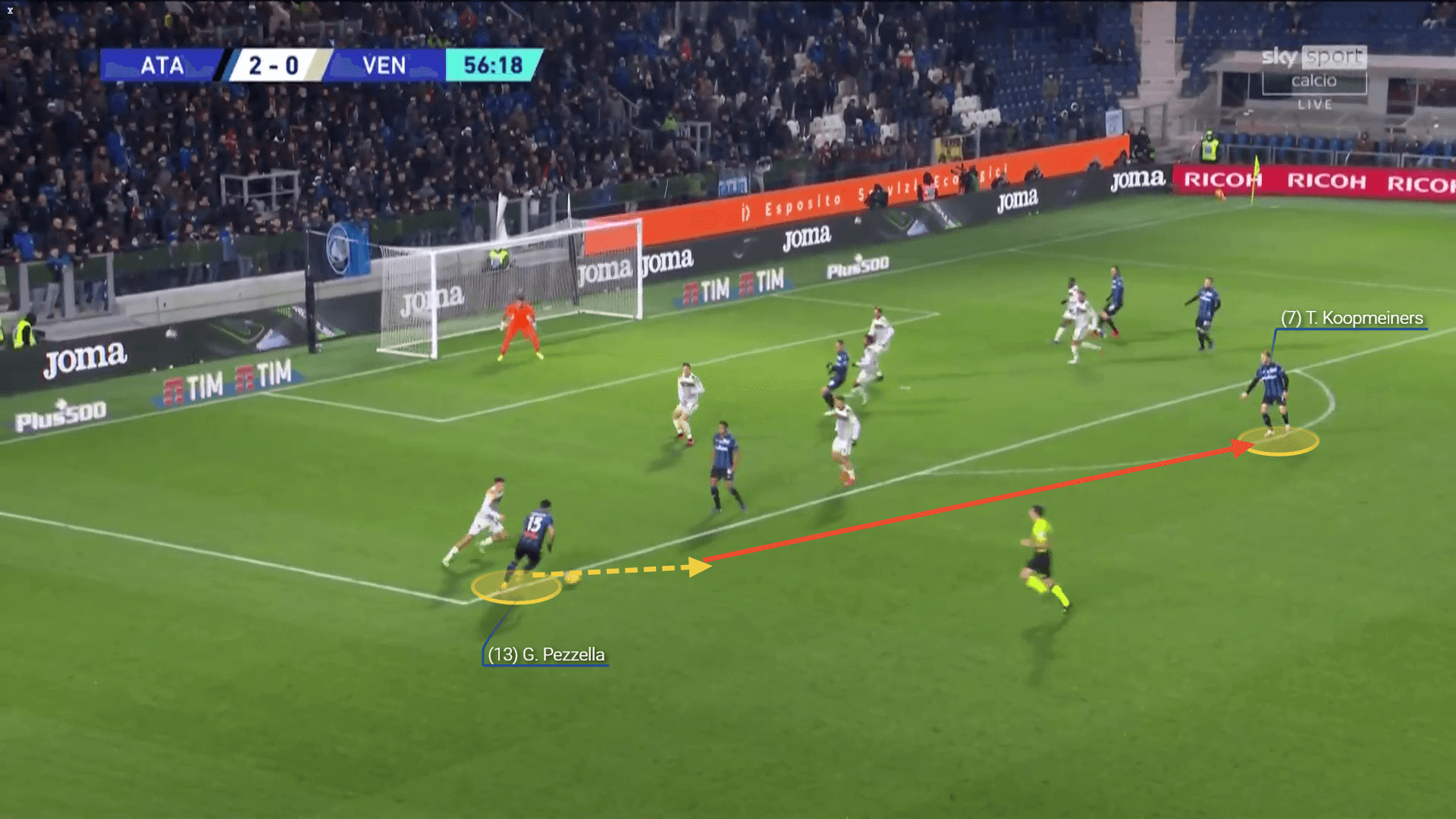 He then steps back to free himself and receive the ball. This allowed him to immediately shoot and catch the opposition off-guard.

How can Napoli expose the opposition?

Atalanta have a balanced defensive approach but they do experience some difficulties in certain areas. While they aim to have more possession and constantly put effort into intercepting and recovering the ball, they hold the negative record of the most ball losses on average per 90 in the league.

The team lose possession rather easily, most frequently as a result of inaccurate passing when building up from the back or lost duels in the advanced areas. The team tend to make mistakes under pressure and their accuracy decreases.

That’s something Napoli need to consider if they want to create opportunities. They need to increase their awareness and take advantage of the opposition’s mistakes. They could easily expose La Dea should they focus on counter-attacking actions and catching them off guard.

Due to their attack-minded approach, Gasperini’s side have been struggling with defending counters and have already conceded five times from such situations. Napoli haven’t converted many of their counter-attacking chances into goals, but they do manage to shoot in 50% of the occasions which is a prerequisite for being efficient against Atalanta.

The team are vulnerable on the flanks, especially due to the wing-backs’ contribution in attack and Napoli could focus their ball recovery actions there so they can exploit the spaces behind. Mário Rui could be perfect for that purpose, as he can counteract Hans Hateboer on the left but also steal the ball and start counter-attacks thanks to his attacking flair.

La Dea’s frequent possession loss can also give Napoli the chance to create set-piece opportunities. Losing the ball in dangerous areas might force Atalanta’s players to be more aggressive in their direct challenges in and around the box in effort to prevent goals. This could result in fouling the opposing players and conceding set-pieces chances.

Despite Gasperini’s side being well organized in the box and having the aerial advantage in terms of efficiency in the aerial duels, Napoli’s set-plays success rate this season is outstanding and they have converted 12 chances into goals.

Atalanta struggled to find the best solution in attack after Robin Gosens’ injury and departure later on. His contribution to the attacking actions was highly valued and the team didn’t seem to have found a quality replacement in terms of impact in the final third.

Although his position is different from Gosens’, Mario Pašalić’s impact in attack is equally important. The Croatian is among the team’s main creators this season and he’s been both an indirect and direct threat, resulting in scoring nine goals and assisting six more.

His positional awareness and link-up-play ability allow him to stroll between the oppositions’ lines and eighter provide a quality passing option or exploit spaces and be a direct threat. Similarly to Gosens, the runs to the box that Pašalić makes often catch Atalanta’s opponents off-guard and increase their chances in attack as they exploit spaces more efficiently.

It will be very important for the Napoli players to be aware of his movement and to try to limit the spaces between the lines and respectively limit his movement. His one-touch pass combinations can be crucial for dispositioning the opposing defenders and breaking through the best defence in the league this term. 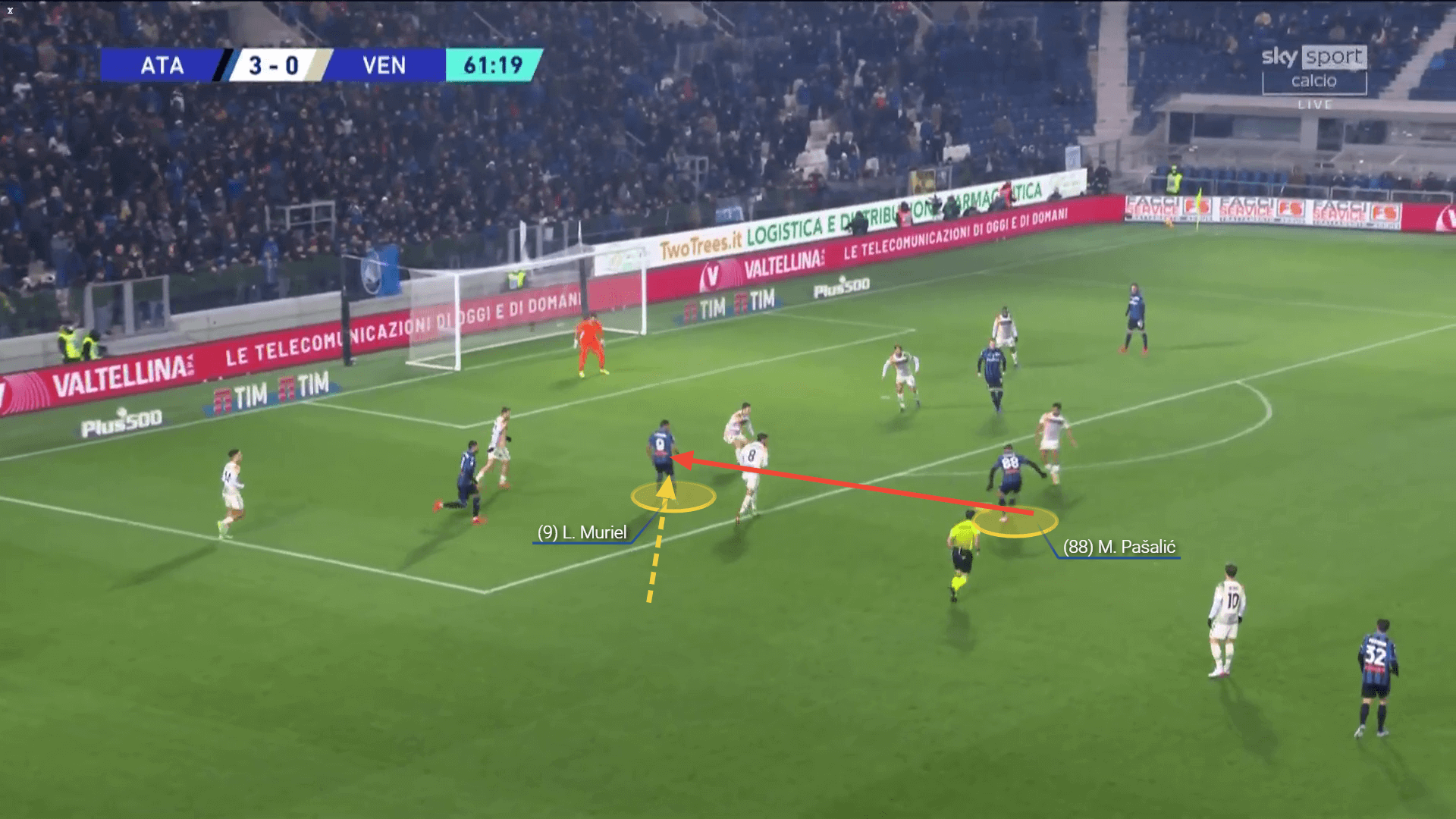 He often provides a passing option in key areas and sets his teammates up with through balls or smart passes.

As our analysis shows, Napoli have all the chances to win this game if they take advantage of their opportunities. They need to increase their awareness and try to use Atalanta’s mistakes to expose them and win the three points. La Dea, though, are a tricky team to go against and have all the weapons needed to make Napoli’s road to the title harder.