This weekend sees reigning Premier League champions Liverpool host Sheffield United at Anfield. It’s been a bit of a stop-start beginning to the season for Jurgen Klopp’s side, with the well-publicised thrashing at the hands of Aston Villa certainly one to raise a few eyebrows, whilst there was disappointment at last week’s draw against Everton, and not just for the result, but with the long-term loss of captain Virgil van Dijk. As for Sheffield United, it’s been a disappointing start to the campaign themselves, as they languish in 19th place, with just one point from their first five games. United have certainly had a slow start, but three of their four losses have only come by one goal, and their expected points total is 5.5 suggesting they have been unlucky. Perhaps Blades fans shouldn’t hit the panic button just yet. However, in three of their five games they have failed to score, only hitting the net twice this league season and only one of these coming from open play, so a lack of goals is a clear concern for Chris Wilder. This tactical analysis will look to give a prediction on the tactics we might see play out in this fixture, by giving an analysis of past patterns occurring in both teams most recent games.

When it comes to how the sides will line-up in terms of formations it’s unlikely we’ll have any surprises. Under Wilder, Sheffield United have been loyal to the 3-5-2 for many seasons and there’s little chance of that changing in this fixture. Likewise, Liverpool are fond of a 4-3-3, and again, it would be a shock to see them vye away from this tactical set-up.

Where the questions arise comes more so when we look at the personnel we’re most likely to see line-up in said formations.

Fortunately we can ascertain a lot of Klopp’s plans for his side thanks to the midweek victory away at Ajax, where we saw Liverpool play without their talisman for the first time since his injury last weekend. With Joel Matip missing the Ajax game with a slight injury, Klopp had little choice but to drop Fabinho into centre-back next to Joe Gomez. However, Matip is expected to be in contention for this weekend, and whilst he was better against Ajax, Gomez didn’t exactly impress against Everton, and we could well see Liverpool go with a back two pairing of Fabinho and Matip.

Whilst Curtis Jones started against Ajax, it’s likely that both Naby Keita and Thiago Alacantara will at least be in contention to start this coming weekend, and preferably they will both be available.

We may well see Gini Wijnaldum and Jordan Henderson in front of Thiago in the middle, albeit it wouldn’t be a surprise to see Keita come into the starting line-up.

Sheffield United’s back three is likely to be made up of John Egan, Chris Basham, and one of either Jack Robinson or Enda Stevens. Either side of this back three we’re likely to see George Baldock and Max Lowe in the wing-back positions. Sheffield will generally operate with a single pivot, and it’s likely either Oliver Norwood or Sander Berge will take this position whilst the other will parner John Lundstram in front of the pivot. Up front, United have varied between David McGoldrick and either Oliver Burke or Oli McBurnie over the last few games. With United looking stronger against Fulham and McBurnie looking sharp with a couple of good chances, it’s likely Wilder will stick with the same front two.

How Thiago (and the front three) can make Liverpool tick

If Thiago is fit, and with Fabinho playing centre-back, there’s a good chance we will see him play in a deeper position as he played so often for Bayern Munich, and look to play more searching deeper passes into the front three. He was excellent in this role in Liverpool’s 2-0 win away at Chelsea back in September.

Thiago drops entirely into the back line in build-up, either side or in the middle of his centre-backs, and in doing so it allows Liverpool’s full-backs, Trent Alexander-Arnold and Andrew Robertson, to push forward, essentially giving Liverpool a 3-4-3 in possession which we can see in the image below. 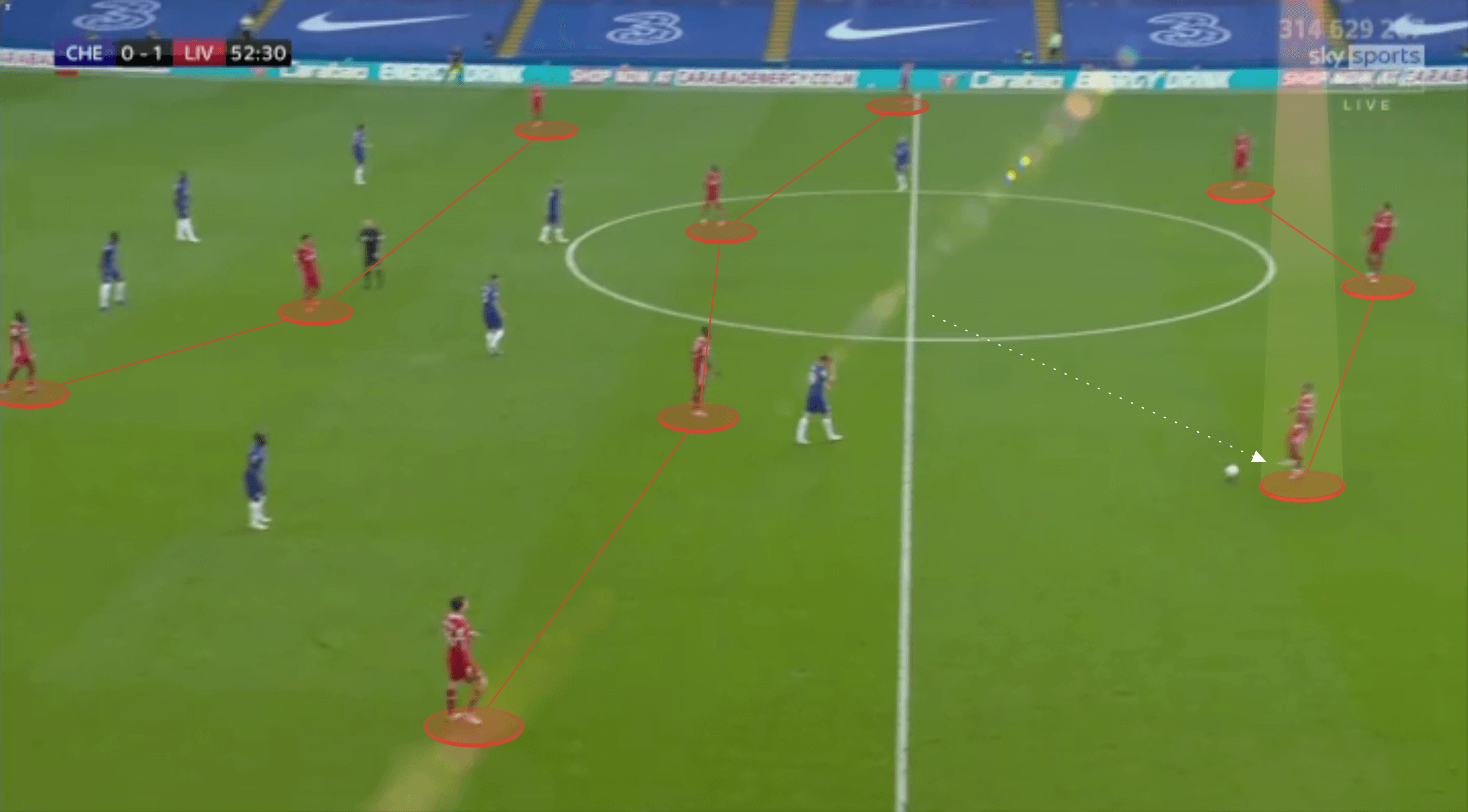 Yet Liverpool’s shape is very fluid, and this is not a rigid set-up. Whilst Thiago will remain deep, expect the two central-midfielders in front of him to push much further forward particularly when Roberto Firmino drops into the midfield to receive possession. We can see how Fabinho instantly pushes into the space vacated by Firmino, whilst Mané and Alexander-Arnold provide plenty of width in this particular phase. 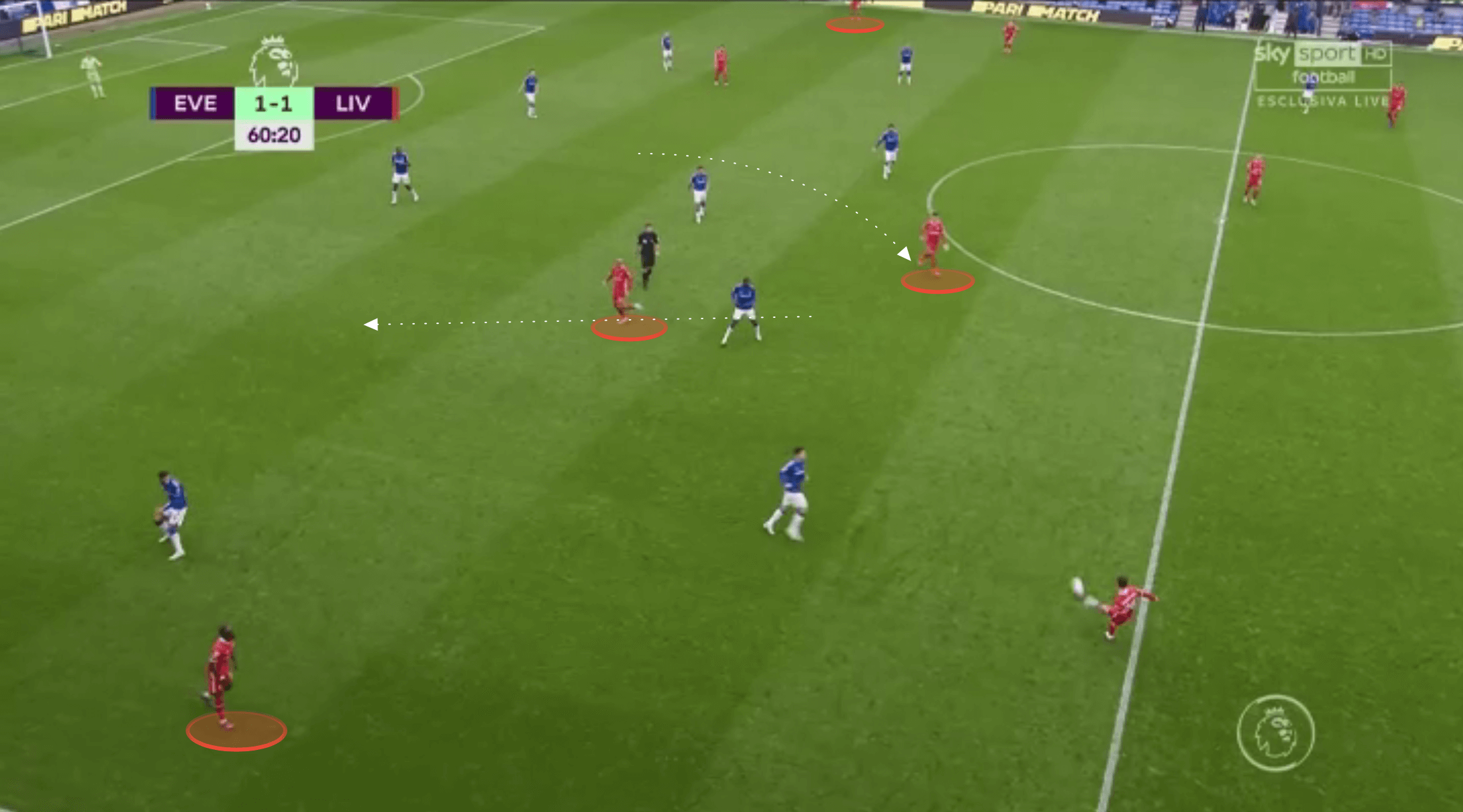 It’s unlikely that Sheffield United are going to press Liverpool too intensely, having had an 18.46 PPDA average in their games thus far in the league this season, but either way Thiago is a particularly press-resistant player who is as excellent playing under intense pressure as he is with all the space in the world to pick out players with his range of passing.

What’s more likely, however, is Sheffield United instead choosing to sit in, in a mid-to-low block and seek to frustrate Thiago by blocking certain passing lanes. As such, Liverpool will use the movement of their front three to lure Sheffield’s defence out of their compact shape and create enough space for Thiago to play his line-breaking passes.

When Thiago drops deep to join the two centre-backs it will allow the remaining two central-midfielders to drop deep themselves, or push wide, either way creating space in the centre of the pitch for Liverpool’s centre-forwards to drop into just like Firmino did in the image above.

Below we can see how with Thiago in possession, Mané looks to drop into this 10 space. He can be an easy forward passing option initially from Thiago, or, he can evade being marked tightly, and from this position he can make late attacking runs. 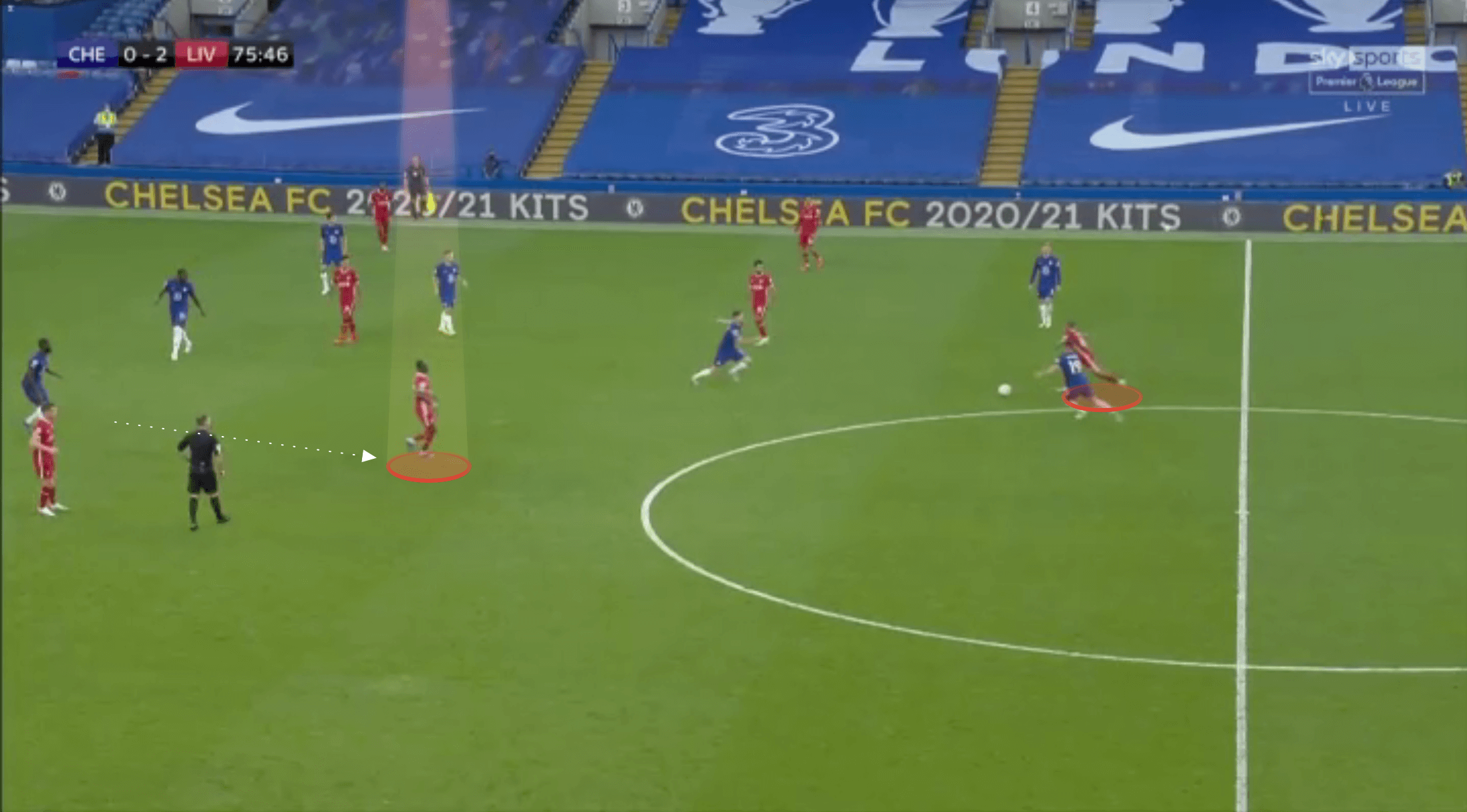 These runs will be into the gaps in the opposition defence that Liverpool are able to create with the width provided by the full-backs, and Thiago’s pinpoint switches of play.

Below we can see how, after Thiago has switched the ball to the left-flank to Robertson, James Milner shifts across to offer an immediate lateral passing option. As he does this, Reece James at right-back for Chelsea is lulled forward into preventing Milner from receiving. Mané is then able to steal behind James into the space created by the right-back pushing forward, and from this position Liverpool can get in behind against the opposition defence. 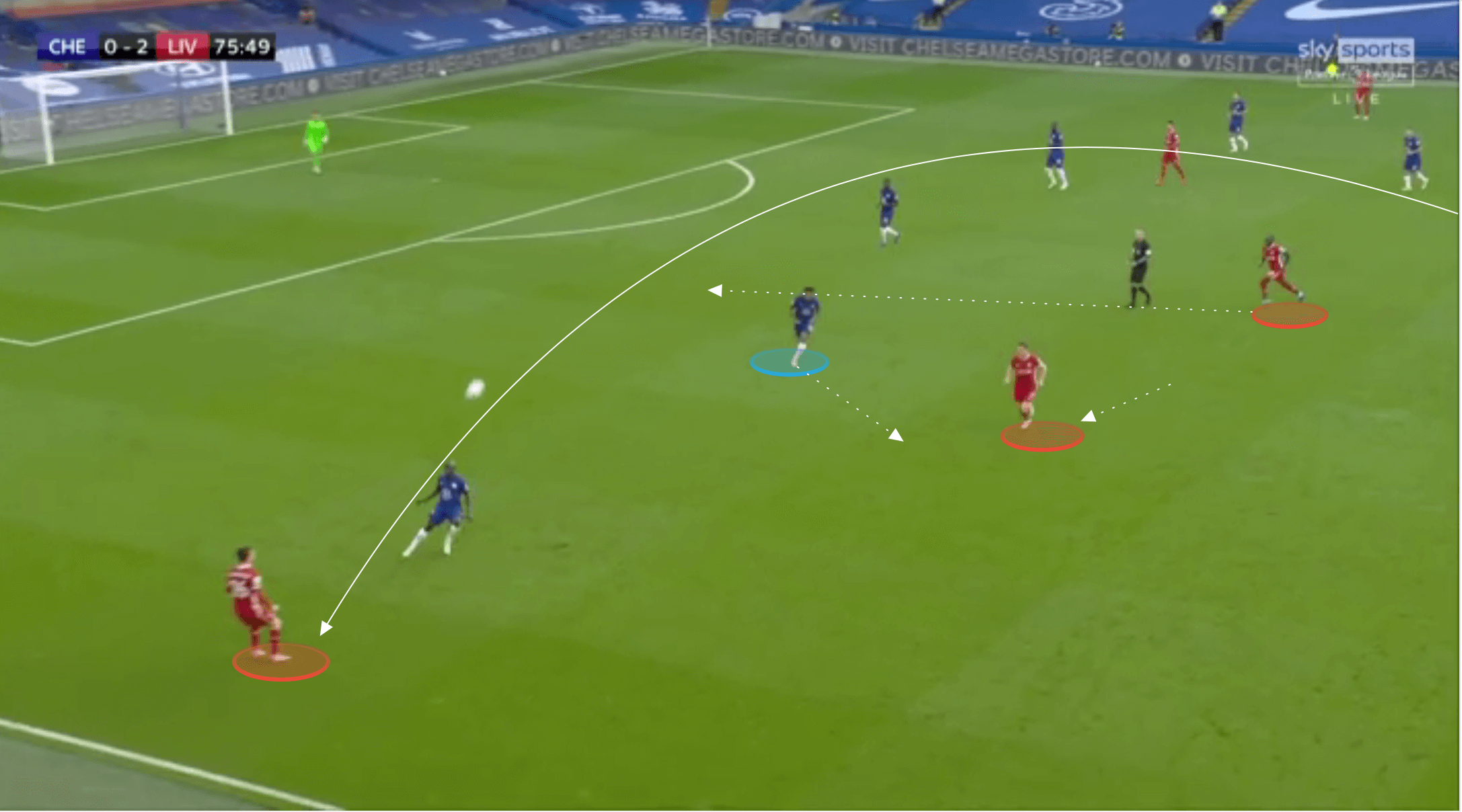 Creating overloads on the wing against the 3-5-2

Thiago’s deeper positioning does create space for him to play forward passes through but it most notably allows Liverpool to truly stretch the opposition horizontally with the width from their full-backs. Salah and Mané will take it in turns themselves too to hug the touchlines and from these positions Liverpool can orchestrate overloads. Against Sheffield United’s 3-5-2, a formation which can be exploited if numerical overloads can be created, this could be an area where Liverpool look to hurt the visitors.

Thiago’s most threatening diagonal pass is towards a forward who is being closely joined by one of his attacking full-backs. For example, if Salah receives a diagonal pass from Thiago, you can expect an immediate overlap from Alexander-Arnold, whilst the closest central-midfielder on the inside will seek to underlap and receive the pass from Salah in the half-space.

We can see this pattern emerging in the image below. 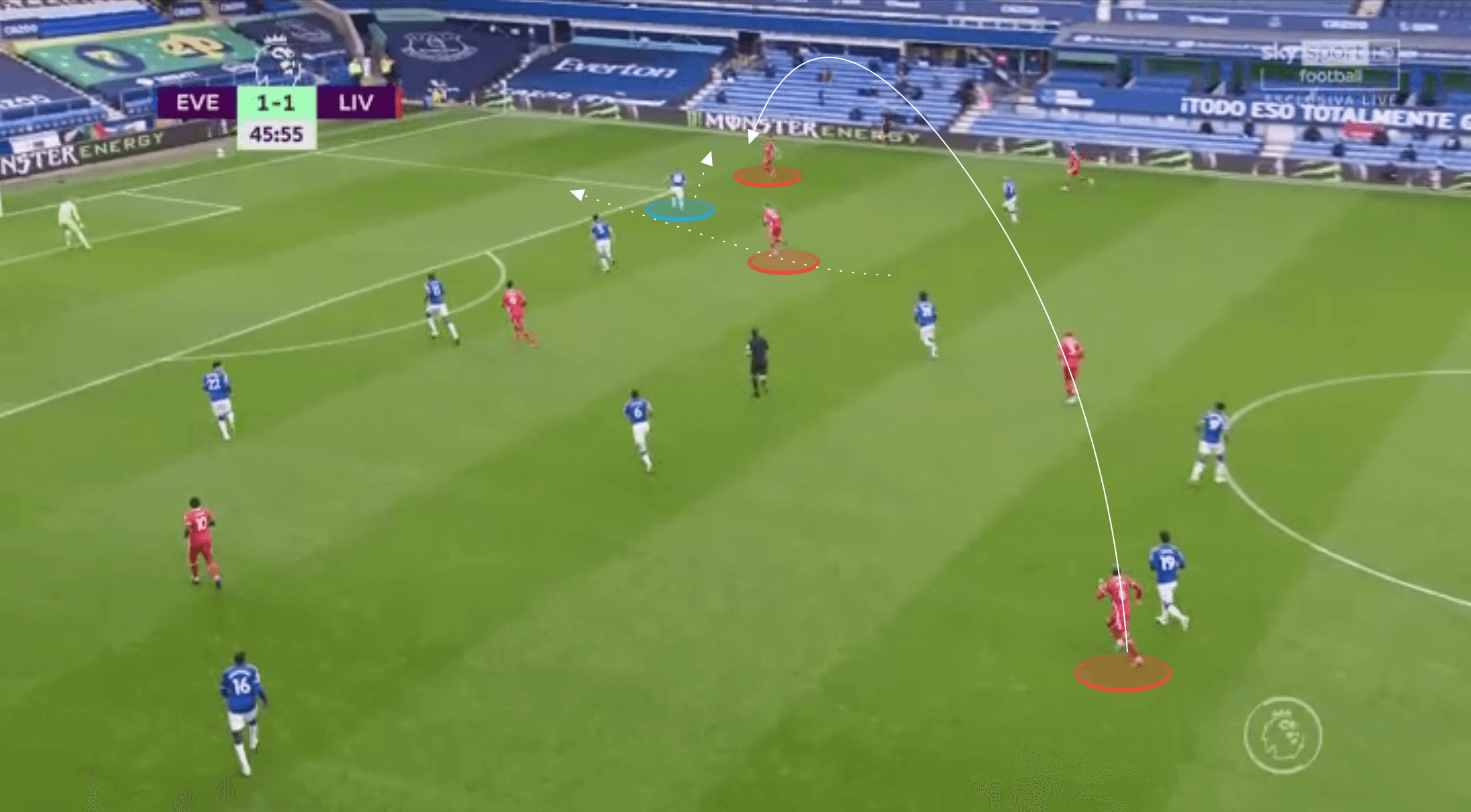 Whilst the positioning of the central-midfielder is important, as it creates an easy overload in this example, it’s the positioning of Alexander-Arnold that is so important in giving Salah the freedom to cut inside onto his left-foot and cause issues for the opposition.

We can see how in the image below, if we look at another of Thiago’s line-breaking passes from a deep area, Alexander-Arnold’s positioning allows Salah to receive unmarked in the half-space as Everton are aware that Thiago could easily play the diagonal pass over the top for the right-back, or should they get tight to Salah, he could easily flick it around the corner for his teammate himself. 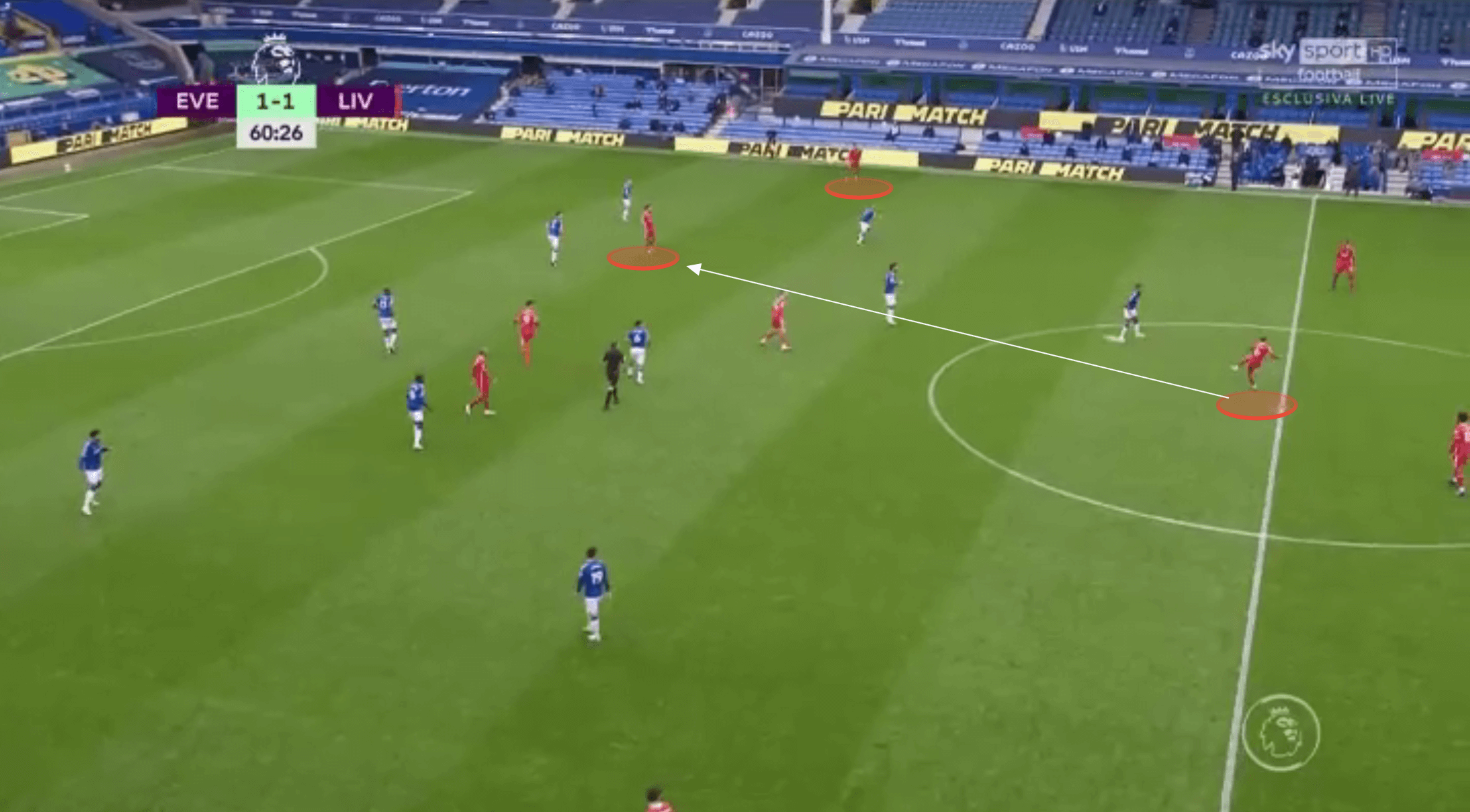 In more developed attacking phases this is still an option for Liverpool, but Alexander-Arnold’s overlap doesn’t just create an overload whereby Salah could play in the right-back after engaging the opposition left-back. What Alexander-Arnold’s positioning does is create enough uncertainty in the left-back’s mind where he doesn’t want to get too close to Salah, and as such Salah can receive in space with enough room to shoot with his left. 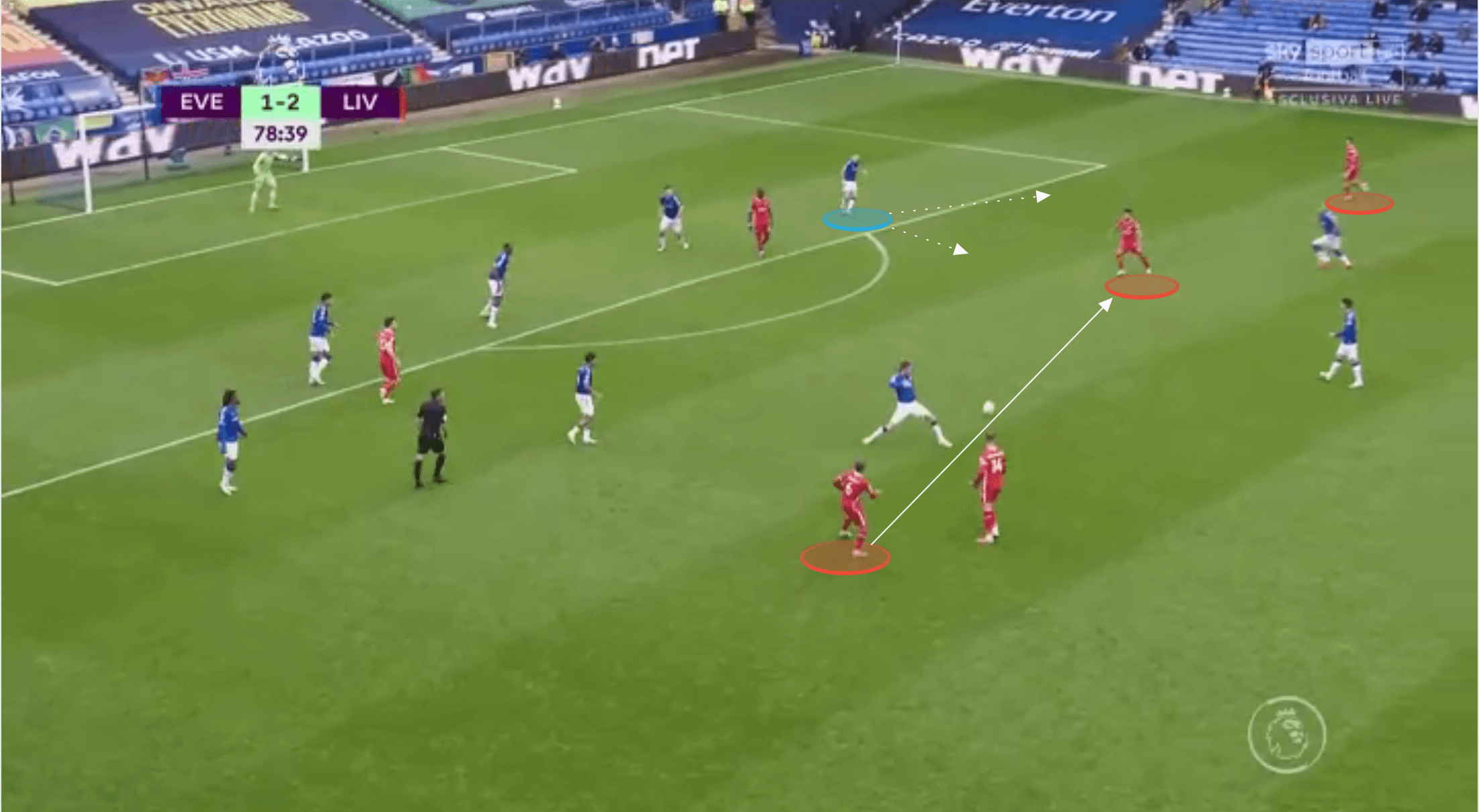 The Blades haven’t exactly got a leaky defence by any stretch but there has been a problem with allowing attacking players to steal away from their marker and find space to be found inside the 18-yard-box. When facing the likes of Salah, Mané, and particularly Firmino, this could be an area where Sheffield United get found out once more.

Against Arsenal, Bukayo Saka was able to find enough space as Lundstram ball-watched and was brought inside with possession entering the central channel of the pitch 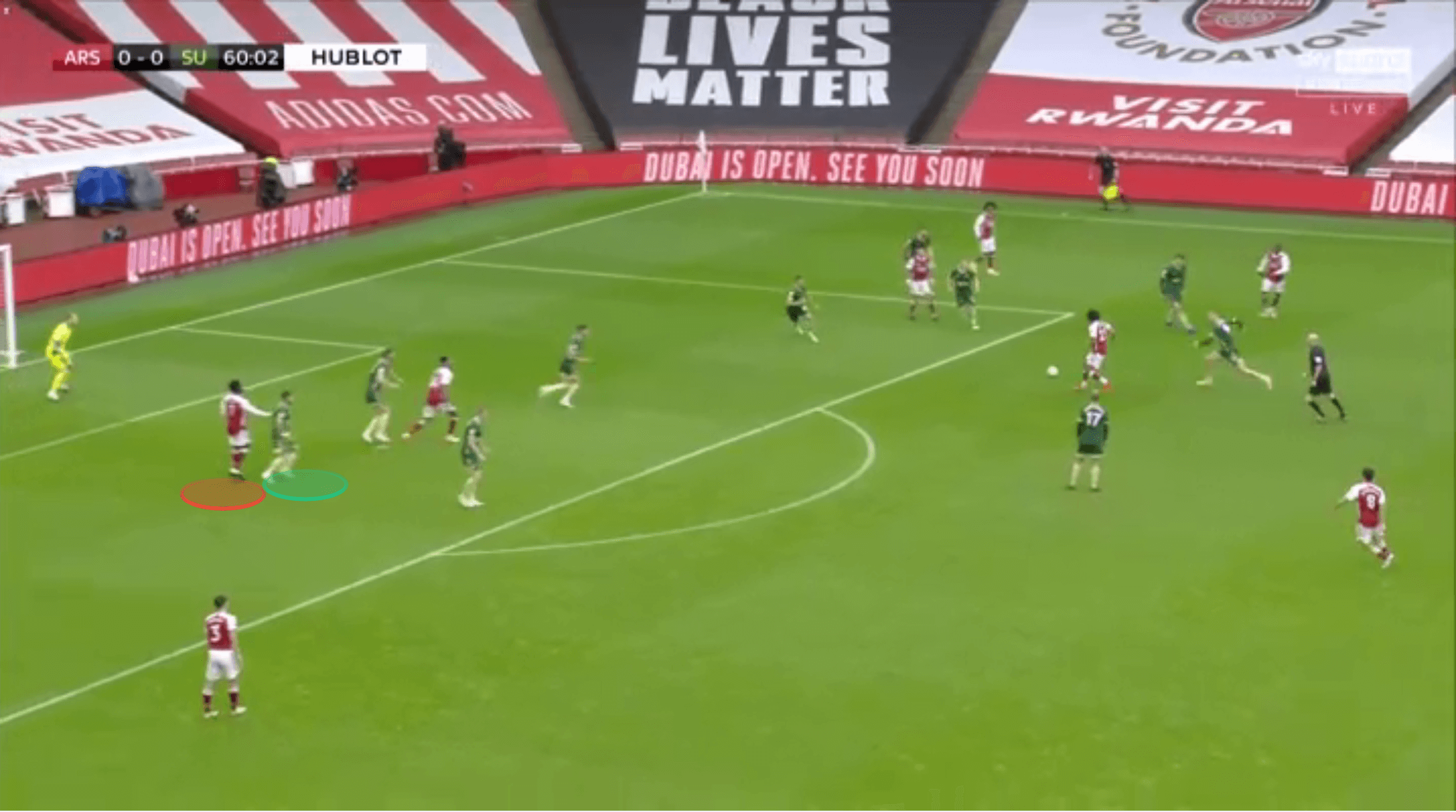 As the ball was worked inside the box, Saka simply drifted off of the right wing-back, who as we can see in the image below had his body positioned entirely away from Saka, where the young Englishman could head home from the cross. 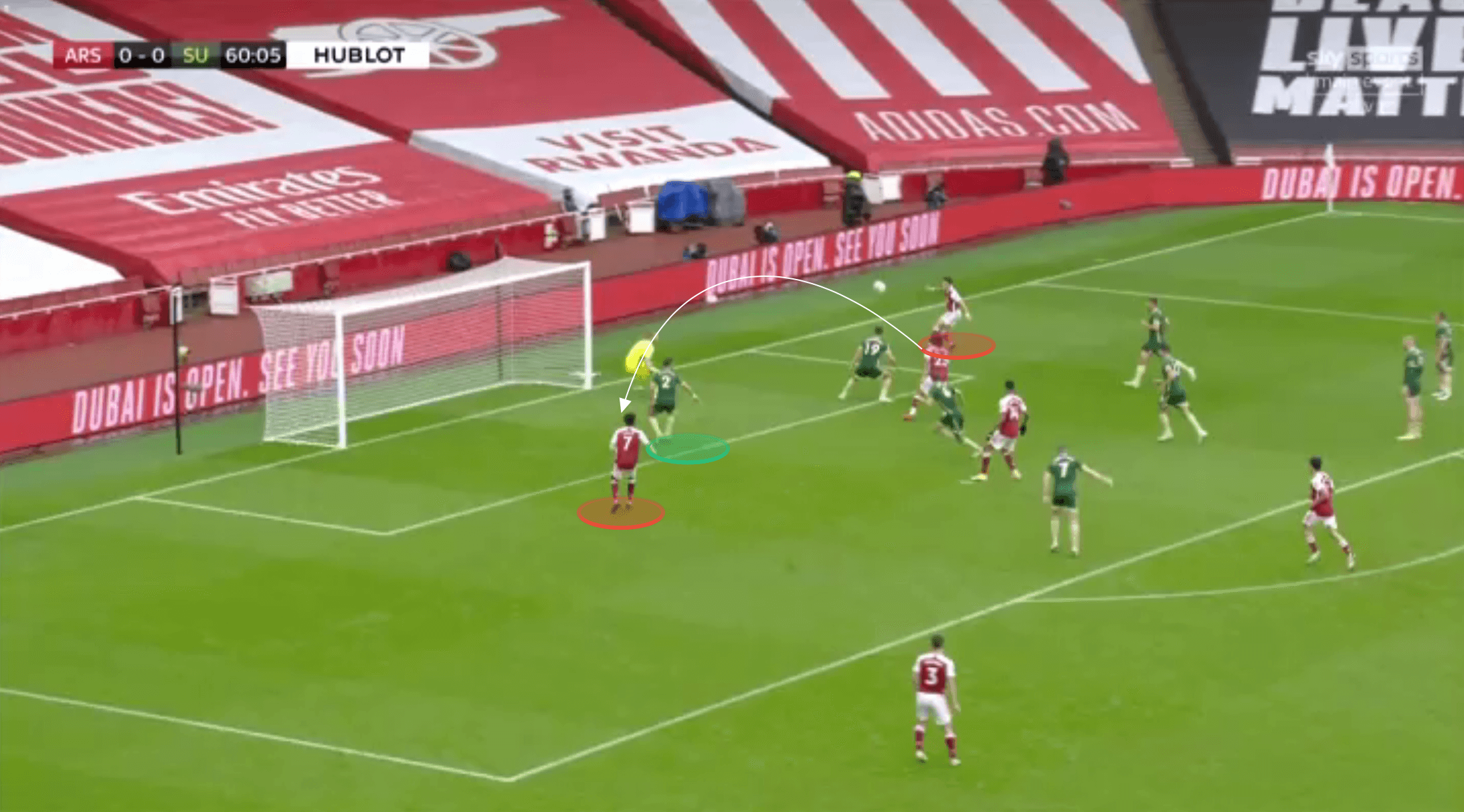 The more concerning issue regarding this lack of strong marking is that it appears to be most apparent when defending crosses, and Liverpool average 17.52 of these per 90, the third highest amount in the league and seven of their 13 league goals this season have originated from crosses too.

Villa exploited this weakness in their win earlier this season with Ezri Konsa latching onto a header across goal from a corner. 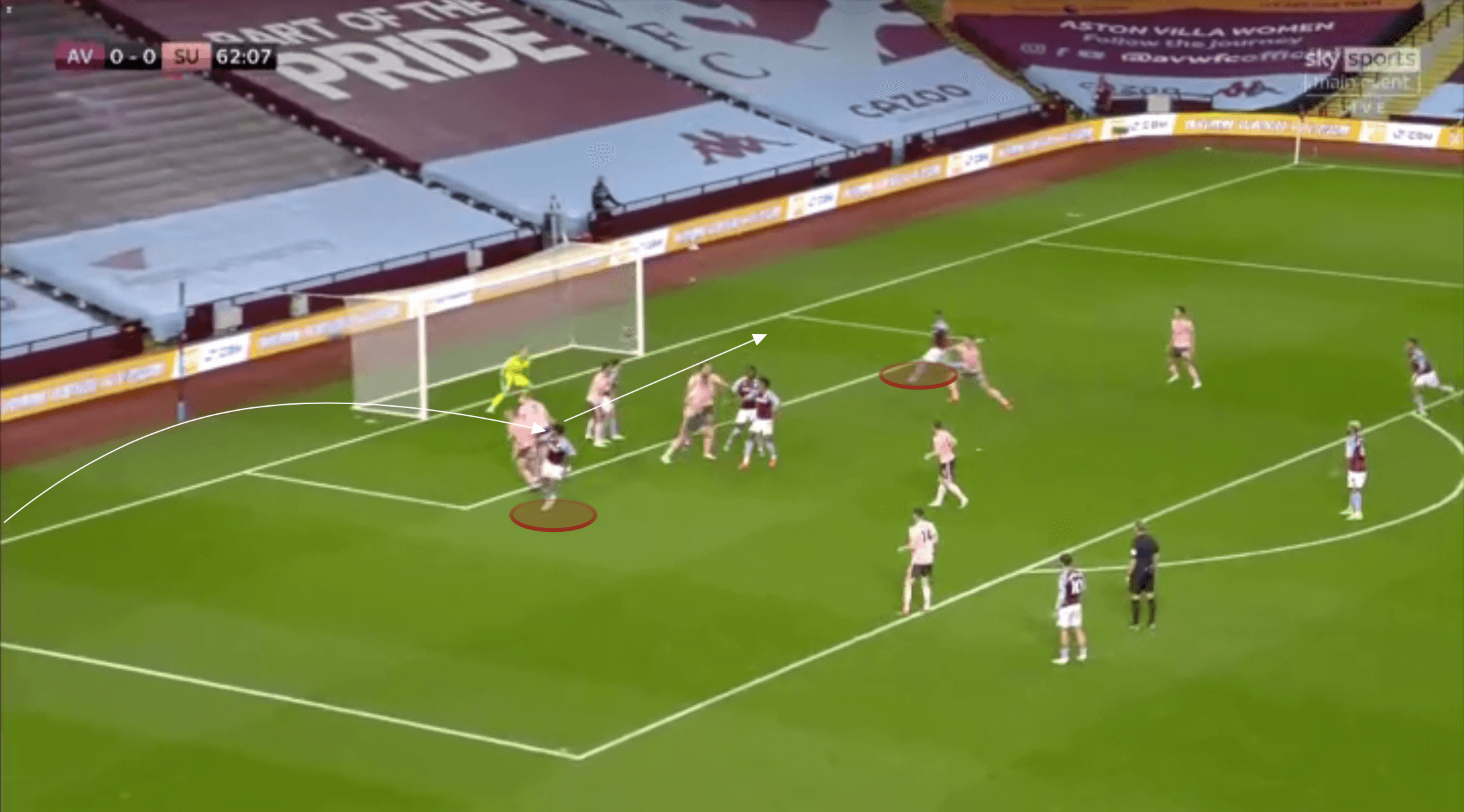 But it’s been seen in several of Sheffield United’s games thus far, and as alluded to earlier, it’s been these momentary lapses of concentration that have made the difference in closely fought games. Below, we can see how Patrick Bamford sneaks in behind the Sheffield centre-back watching the crosser rather than his man, and Bamford is able to head home in space just outside of the six-yard-box. 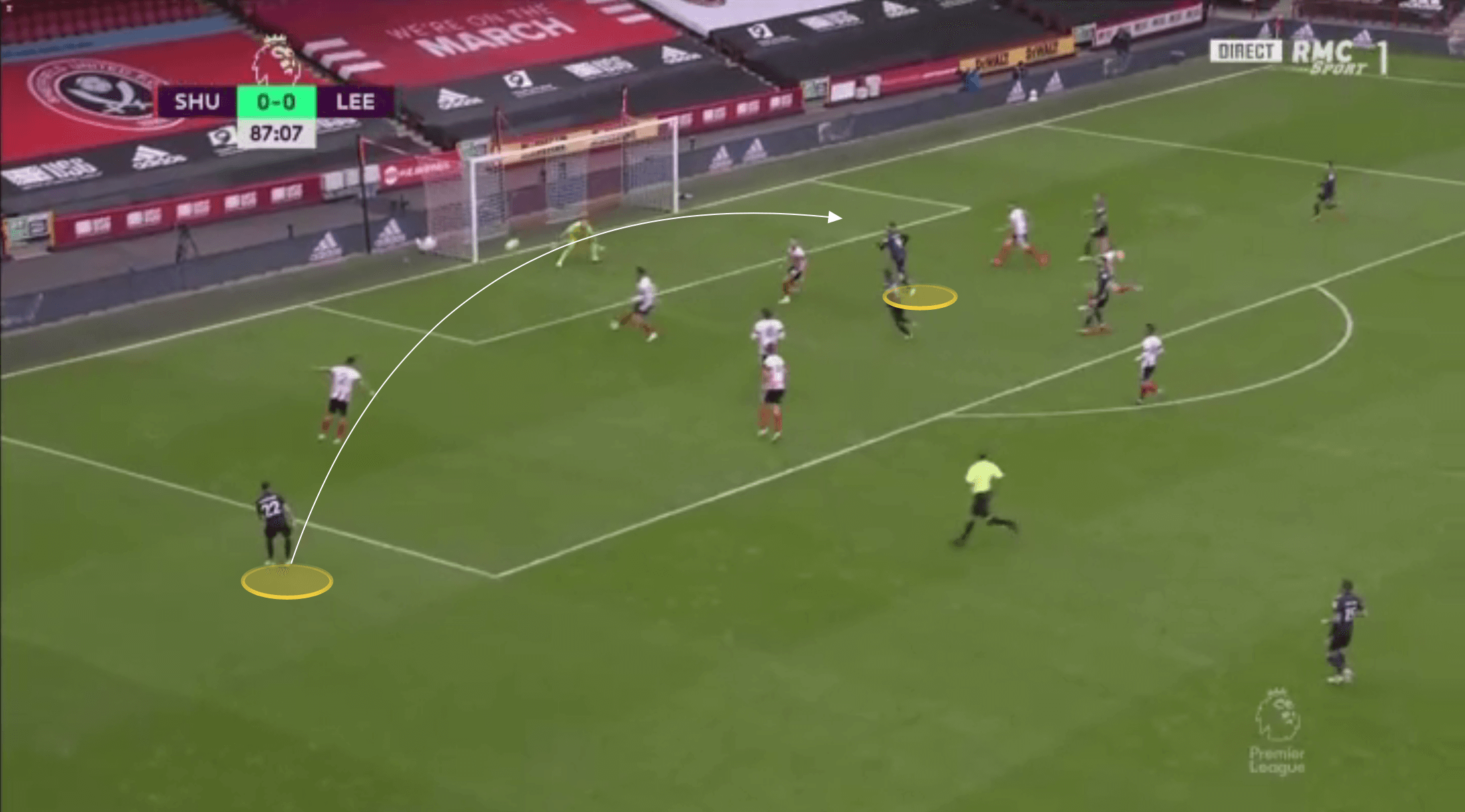 Against Burnley we saw more of the same as two of the three centre-backs were drawn towards Jay Rodriquez who was able to knock the ball down to hsi strike partner Matej Vydra in space. 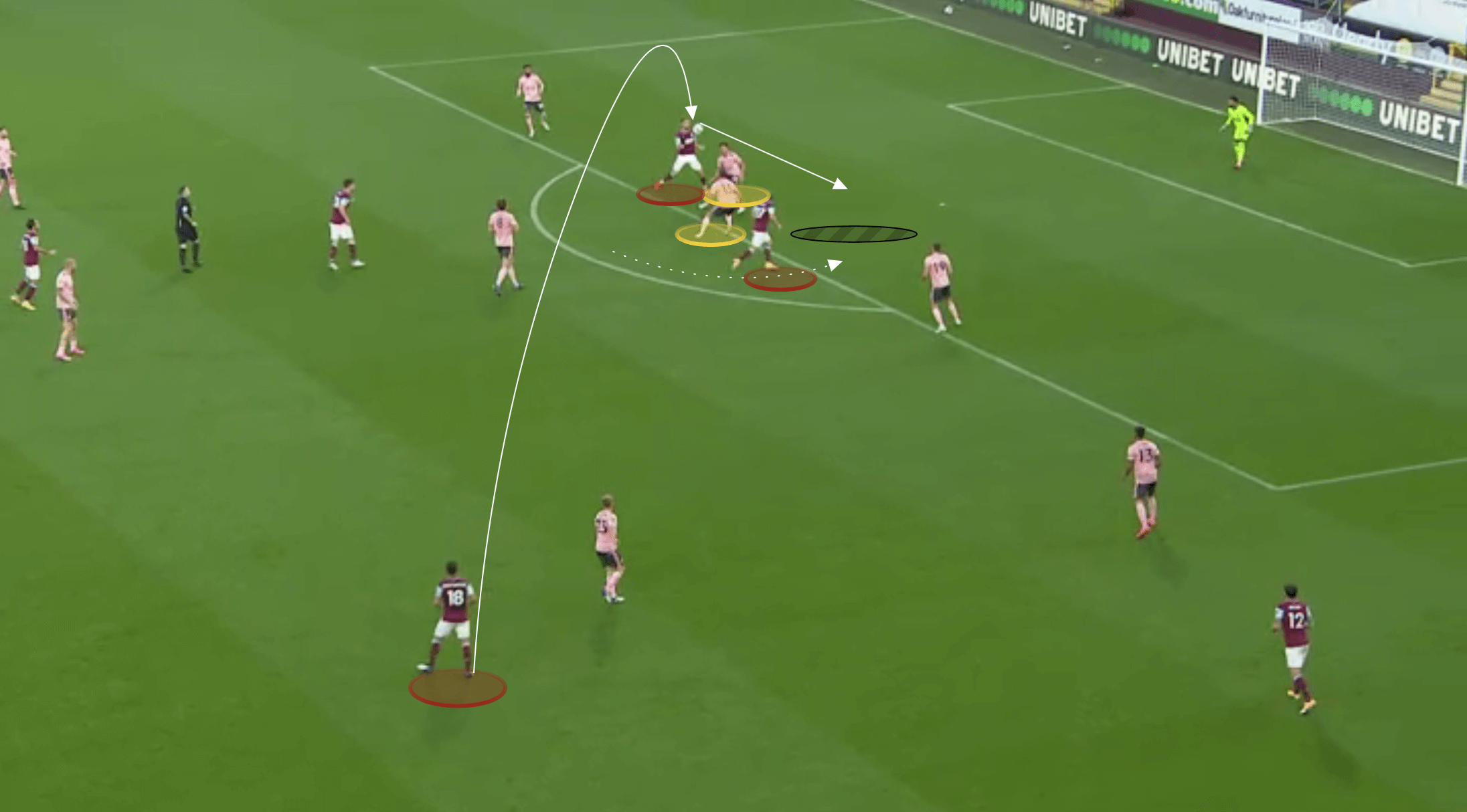 These are all low-quality errors (if there’s such a thing) for a side with a reputation for being defensively solid to be making. It isn’t an issue with the system, but with the concentration levels and discipline of individuals within the system. Liverpool will likely have sustained periods of possession and will undoubtedly be making a high number of crosses into the Sheffield 18-yard-box, the likes of Firmino, Mané, and Salah will be aware of this worrying pattern from Sheffield’s defence this season, and will likely be looking to peel away from their marker at any opportunity.

Although Liverpool aren’t in fine form, there has been enough in recent games to suggest that eleven without Van Dijk, this will be a difficult job for Sheffield United to come to Anfield and get anything from the game. If they are to achieve this, they not only need to remove individual errors from their defensive phase, but cope with the constant threat of Thiago’s through passes, and the overall movement and quality of Liverpool’s front three and their attacking full-backs.