Canada claimed a narrow 1-0 victory over Cameroon courtesy of a headed goal from Kadeisha Buchanan. The centre back evaded Cameroon markers from a corner in the 45th minute to nod home, giving Canada three points in their opening World Cup match.

While the North American side dominated possession, they generally struggled to make any real impact on Cameroon’s tightly packed defence. 74% of the ball saw 16 shots but only four on target.

The Indomitable Lionesses, meanwhile, had a clear game plan – to defend tightly, and hope that they could conjure something up on the break. The closest they came was through a header, similar to Buchanan’s, from Claudine Meffometou meeting a second-half corner.

The Canadians never really got firing for this opening match, although did deserve their victory after being in control of most of the play. Cameroon defended doggedly, though. They will feel frustrated that one slip of concentration from a corner cost them what would have been an excellent point.

This tactical analysis explains how the game unfolded.

Cameroon nominally lined up in a 5-4-1. Three centre backs gave an extra bit of defensive security, helping the pack out the middle of the pitch. The aggression of Christine Manie and intelligent movement of Estelle Johnson was key in defence. The two defenders also ably stepped out of defence to close down in midfield.

Wingers Gabrielle Onguéné and Ajara Nchout were orientated relatively high and narrow. This helped to congest the middle further, as well as maintaining a mid-block. This stopped Canada being able to ease through the middle of the park. Their positioning also put them in a good position to counter should the opportunity arise. 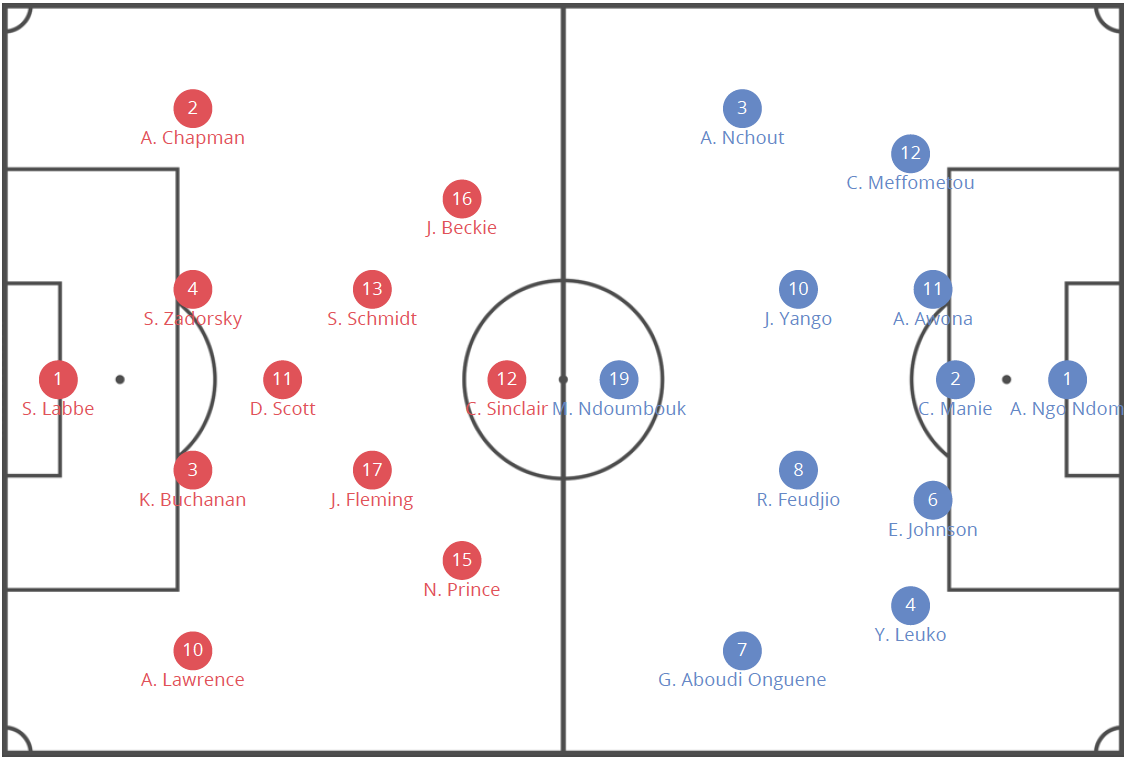 Canada were deployed in a 4-2-3-1 formation – in contrast to the team sheet – and generally focused on trying to play through the thirds. Sophie Schmidt and Desiree Scott played the deeper midfield roles, with both dropping to help with the build up.

Ashley Lawrence provided ample attacking threat from right back, while Manchester City attacker Janine Beckie drifted from the wing more centrally. The line was, of course, led by captain and national team hero Christine Sinclair. She begins the tournament on 181 goals international, just three short of the record set by Abby Wambach for national team goals in both the men’s and women’s games.

As was apparent from their 4-5-1 formation, Cameroon were set up to be tough to break down. In defence, their three centre backs held a firm line. While this was occasionally broken to press in midfield, it was generally a very set shape maintained at the heart of the Indomitable Lionesses’ defence. 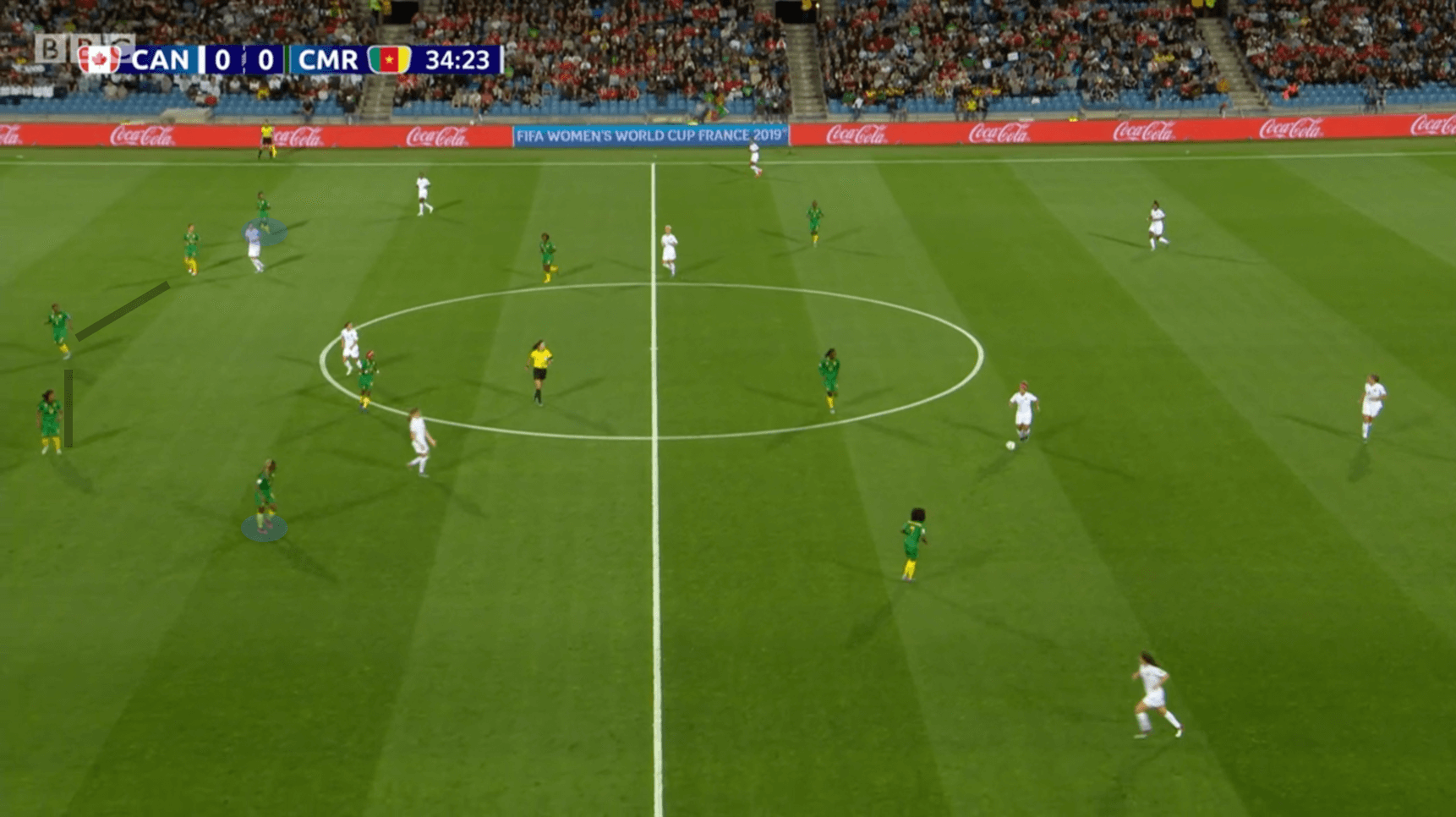 Further up the pitch, Cameroon’s shape took on a curious look. As can be seen below, the two wingers – Onguéné and Nchout – pushed up very high alongside centre forward Marylse Ngo Ndoumbouk. This gave the Indomitable Lionesses a kind of 2-3 shape in defence. 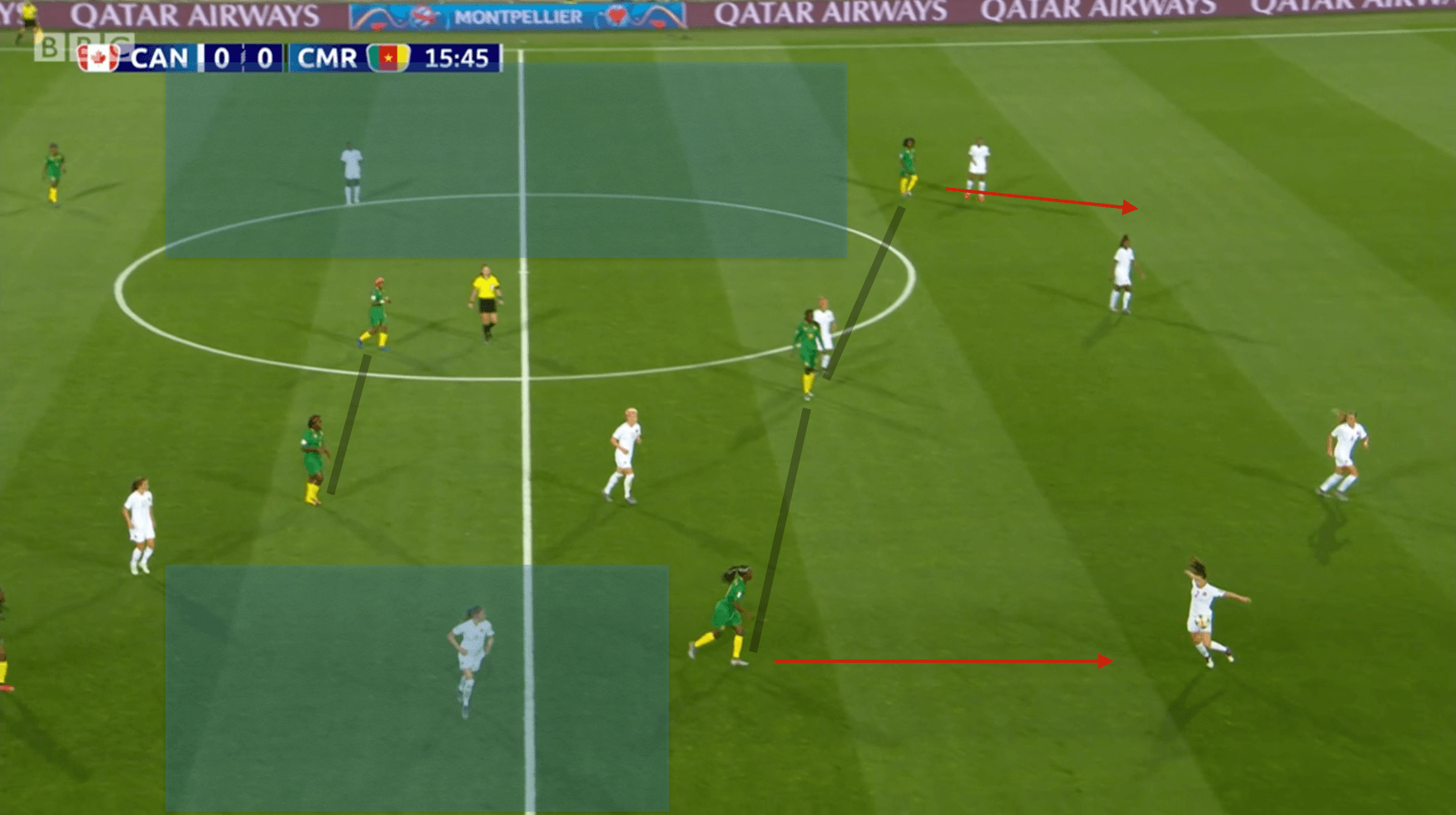 While also helping facilitate a narrow and organised pressing structure, both Onguéné and Nchout were poised to spring into a counter attack. Although there was space left in behind the wingers for Canada to exploit, this unorthodox set up from Alain Djeumfa generally worked well against the Canadians.

When pressed back and defending deeper, Cameroon would generally leave star player Onguéné up front. The intention was to use her pace and trickery in behind as a threat. Centre forward Ngo Ndoumbouk, also highlighted below, would drop into central midfield to aid with the defensive effort. 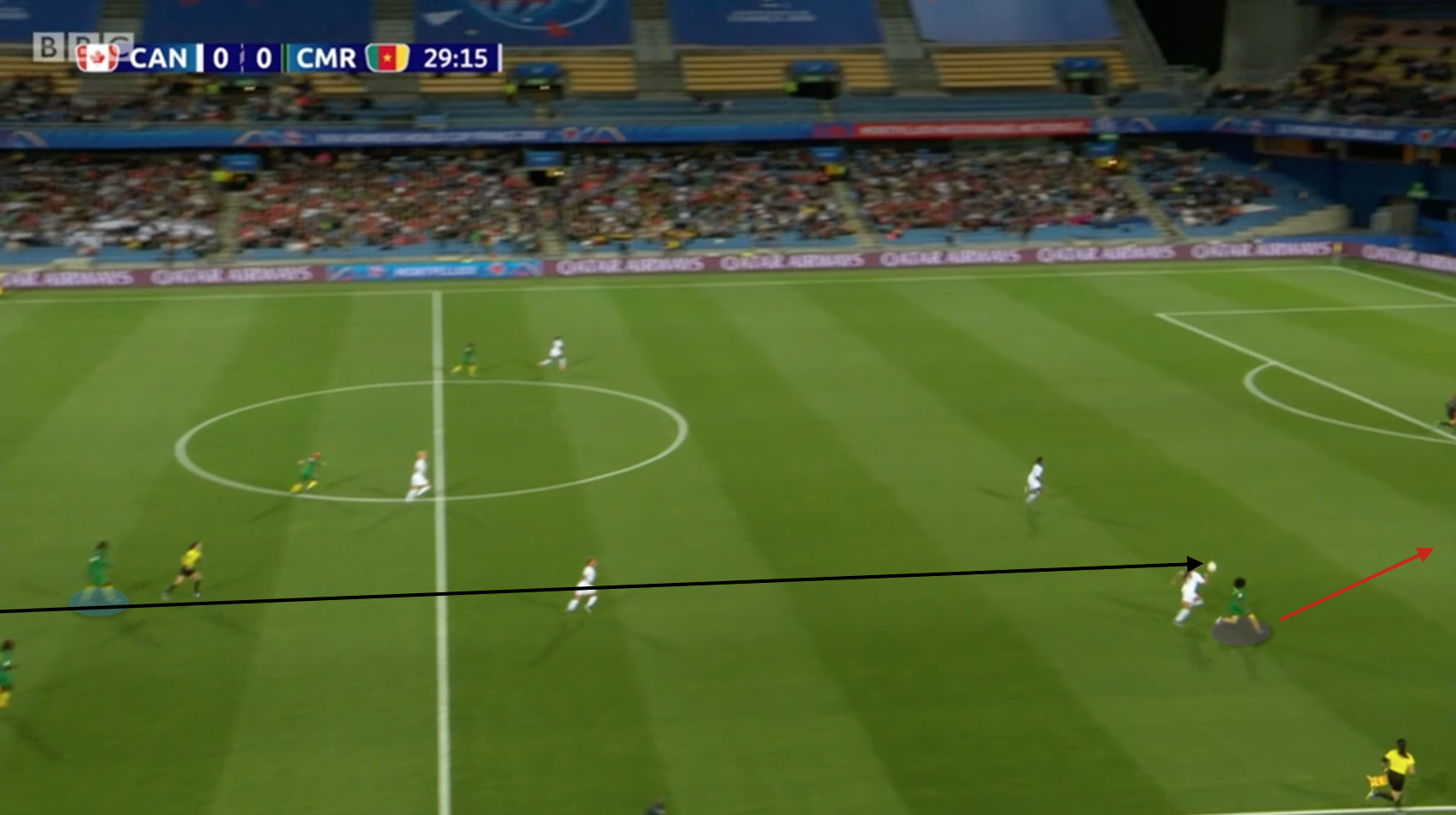 Unfortunately for the Indomitable Lionesses, nothing ever quite came off in this fashion going forward. They were, though, incredibly organised and effective in defence.

Canada’s 4-2-3-1 had an emphasis on building from the back. As previously mentioned, both Schmidt and Scott dropped back frequently to aid in the build-up. Schmidt, in particular, frequently dropped very deep – almost in between the centre backs. 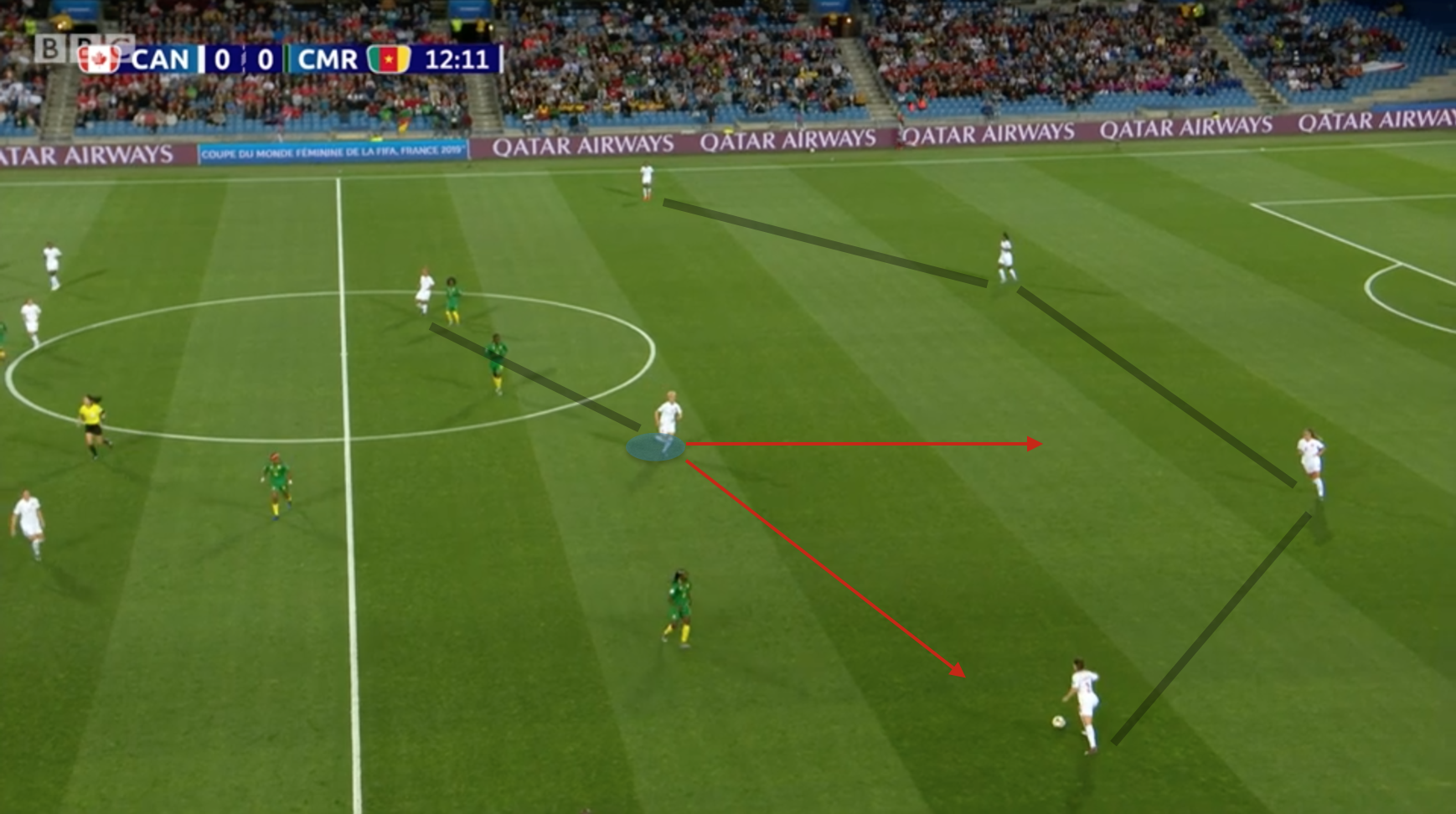 The build-up was tidy but not often particularly threatening. Canada did, though, try and mix it up sometimes. Below, we can see a tactic they deployed to do so. Right back Lawrence would push into higher up areas on the pitch, with Scott dropping back from midfield to cover. This was to make use of the excellent dribbling ability Lawrence has in more advanced positions. 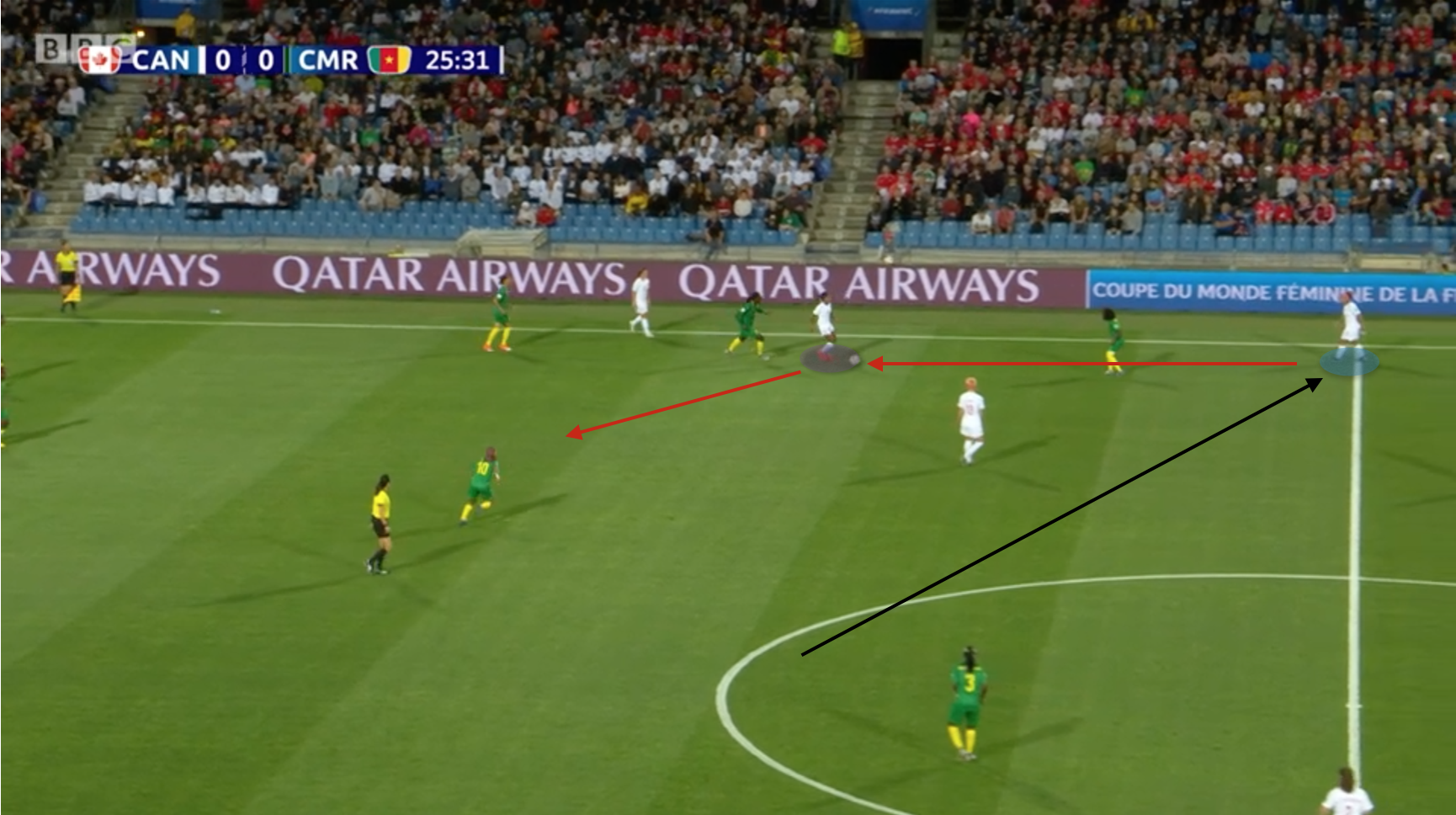 With the pedestrian nature of the Canada build, centre forward Sinclair was forced to come deep for the ball. While this did help vary the attack and pull the Cameroon defence around, it came at the cost of removing the team’s most potent goal threat from dangerous areas. No other attacker was able to compensate for this in the box. The move below resulted in a cross that was comfortably cleared by the Cameroon defence, despite the dangerous position. 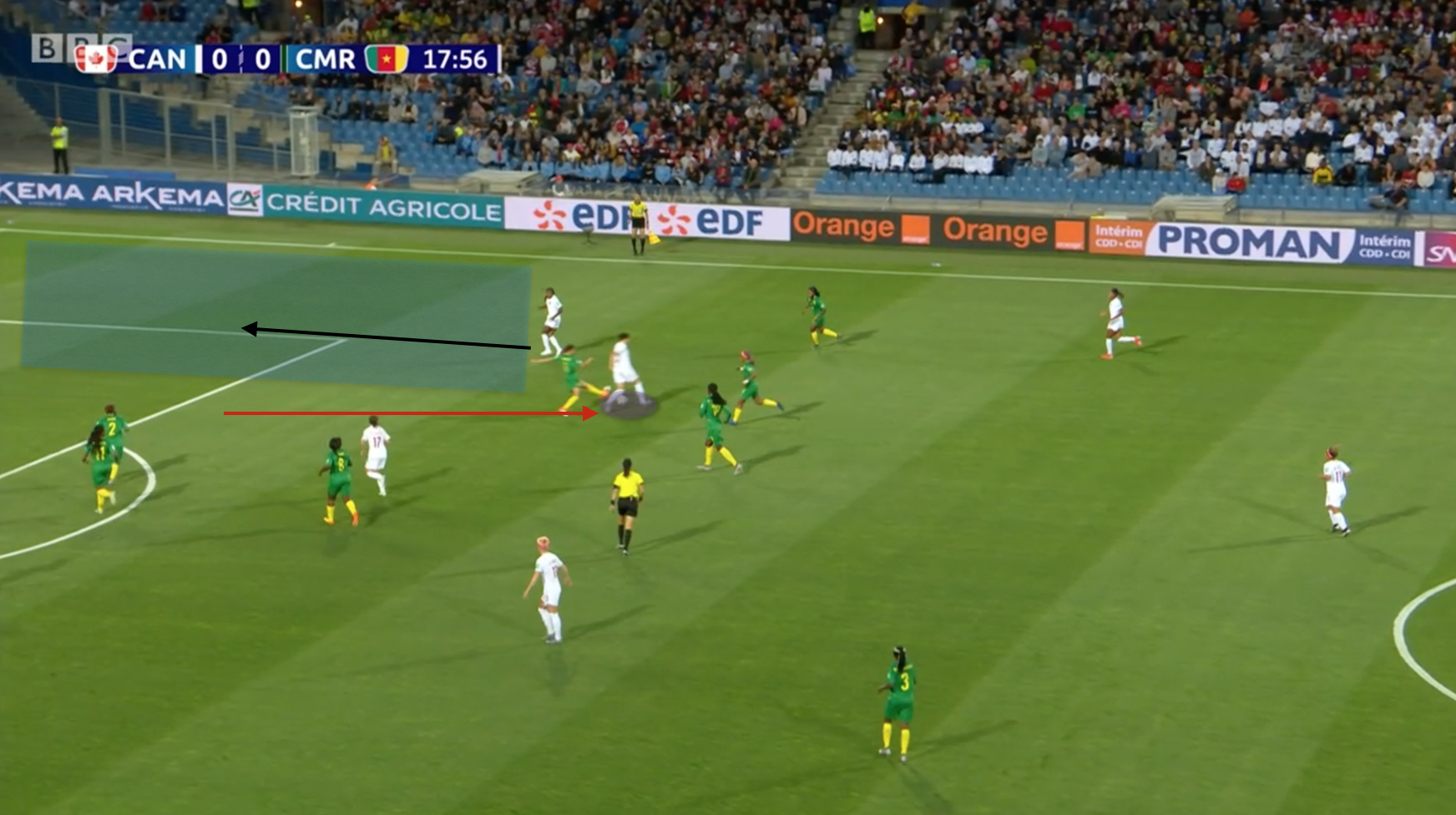 Attacking midfielder Beckie was another player who frequently dropped during the Canada build. A majority of Canada’s good play went through the Man City player. It was still a tough night for her too, though. The packed Cameroon defence gave few opportunities for her creativity to truly flourish. She was also frequently forced to drop very deep, where she wasn’t able to be as effective. Her total of five chances created was still, however, the highest on the pitch.

Gaps in the Armour

The shape of Cameroon, both further up the field and in defence, meant that the centre of the park was very congested. This made it difficult for Canada to play through the middle. Things also weren’t helped by a lack of imaginative movement from the team ranked fifth in the world. The red highlighted area below shows that congested centre in the Cameroon defence. 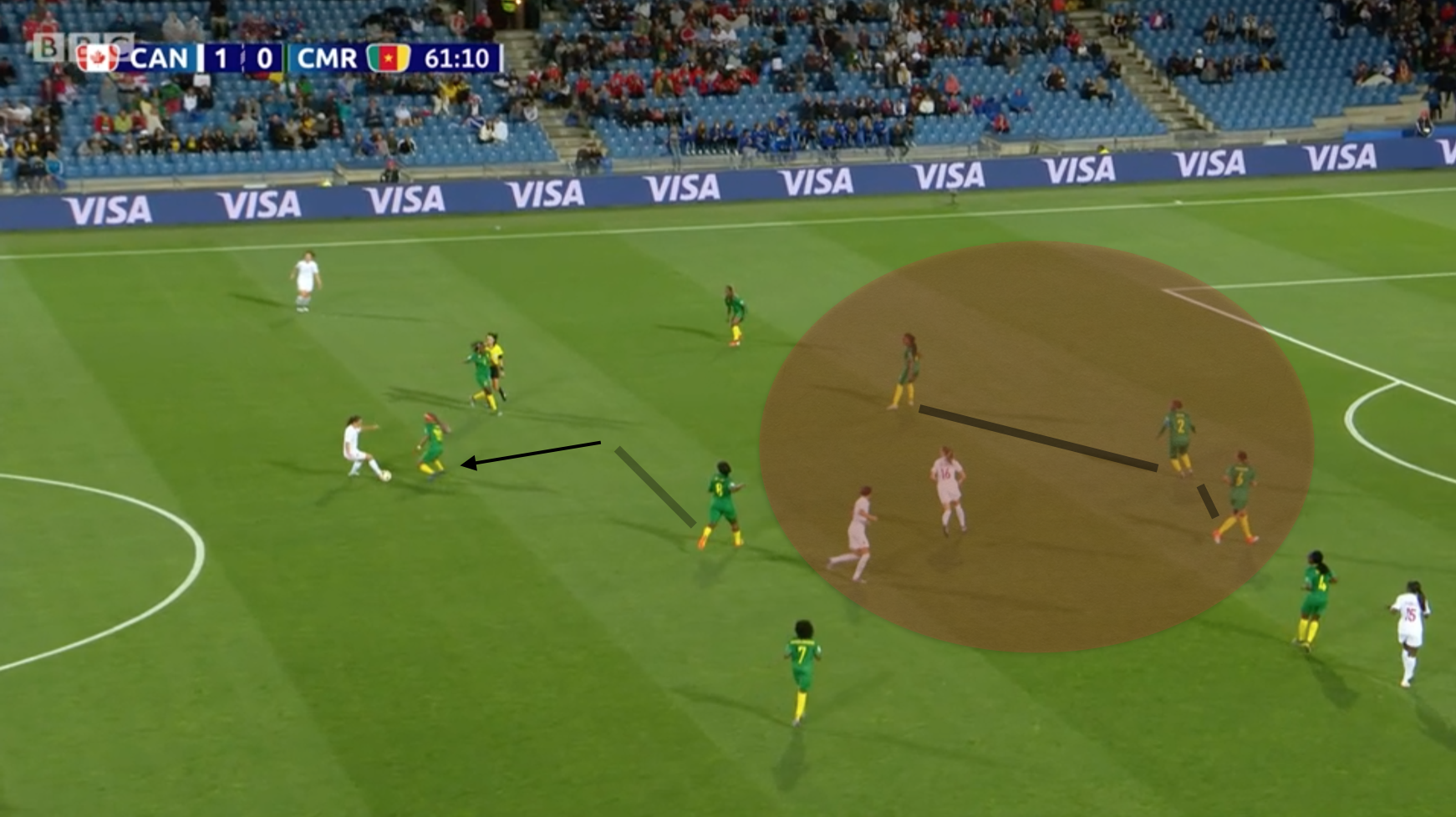 Where the Indomitable Lionesses were exposed, though, was down the flanks. As previously mentioned, the orientation of Cameroon’s wingers meant that there was space in behind them. This could be got at by the Canadian full backs, as can be seen below. 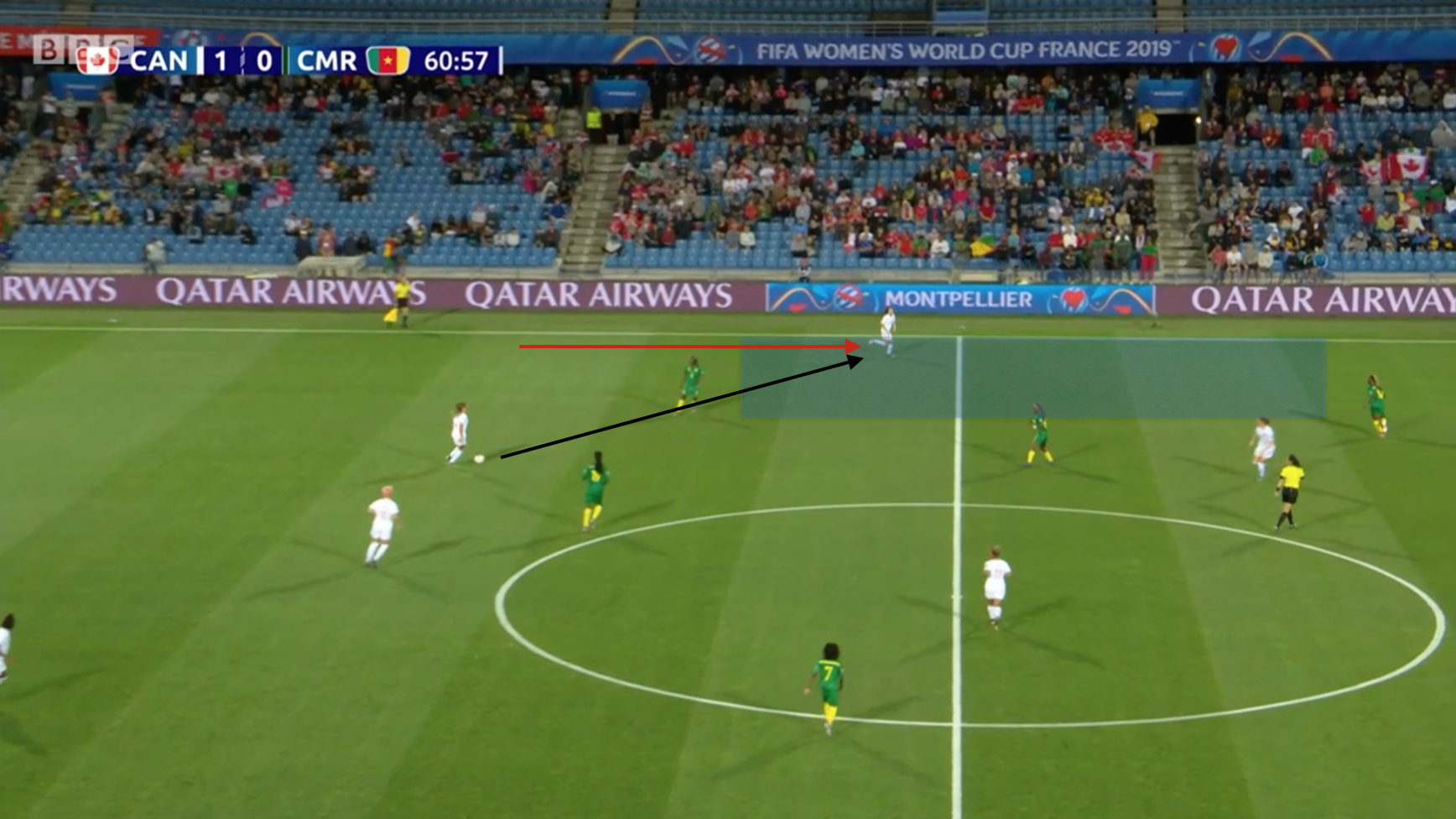 When this was effectively done, it would create a two versus one situation between the Canadian full back and winger and the Cameroon full back. While this was a good way to attack, the extra body at centre back meant that there was some expendable cover available to mop up behind the full back. 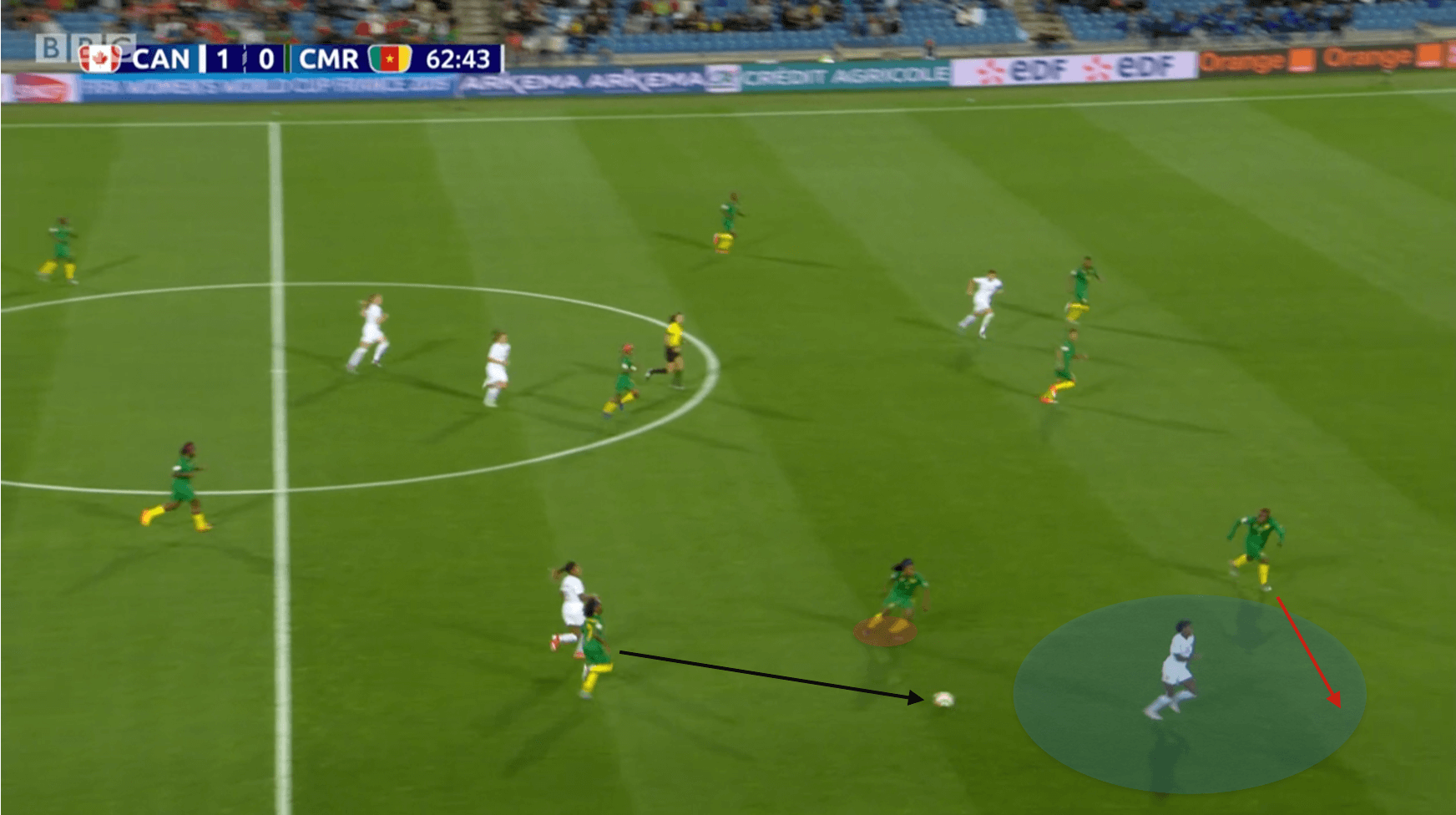 As can be seen above, centre back Manie is on hand to cover the danger created by this particular instance.

Canada enjoyed most of the possession but did so without posing any consistent threat. They struggled to break through a tightly packed Cameroon defence and often found themselves having to sacrifice numbers in the final third in order to get the ball moving up the pitch. It was important, though, that they managed to grind out a goal and a victory after dominating so comprehensively in this World Cup opener.

The Indomitable Lionesses will be angered by the sloppiness of the single goal conceded after such a solid defensive display overall. It was a performance to take heart in defence wise, but going forward they looked somewhat stunted. Cameroon will need to get greater numbers forward in coming matches to have any hope of scoring.