The first step towards the Women’s World Cup this summer – that we will cover – is the English SSE Women’s FA Cup. In the final, Manchester City faced West Ham United. This tactical analysis will reveal how Manchester City battled and won their second FA Cup title in three years.

Despite the 3-0 result that suggests an easy win, Manchester City a had much difficult combat due to the opponent’s great defensive work throughout the first half. West Ham were able to reduce Manchester City’s threat, although their narrow play helped West Ham to hold a compact defensive shape. Nevertheless, it was an impressive job considering Nick Cushing’s side has an average 2.57 goals per match ratio.

Furthermore, City could dominate the game with the higher possession rate and lacked the quality scoring chances. While West Ham were really close to grabbing the lead in the 29th minutes after a stolen ball that Jane Ross almost scored but Karen Bardsley saved the header with great reflexes.

The second half was much less impressive from West Ham’s perspective as Manchester City scored early on. Matt Beard’s side couldn’t respond to that and City secured their second FA Cup title in three years with two late goals.

Manchester City are a major power in England’s highest league, the Women’s Super League. In this season, they finished in second place just behind Arsenal, but they have not beaten.

Nick Cushing deployed a 4-3-3 system for this match with Karen Bardsley in goal. In the centre of the defence, Jennifer Beattie and English national team captain, Steph Houghton played. Abbie McManus and Demi Stokes employed in the full-back positions. In the midfield, Keira Walsh played as a single pivot but Caroline Weir often dropped to help her. While Jill Scott had more freedom thus she pushed forward when they had the ball.

As usual, Nikita Parris in the centre-forward position was tasked with trying to run in behind the opponent’s defence thus creating a constant threat. By the way, she was recently named the player of the year. On the two sides of the front three, Georgia Stanway and Tessa Wullaert played, but Wullaert often dropped to the right half-space.

While on the other side, West Ham United came to this clash as a rookie since this was their first season in WLS. Matt Beard also used their usual 4-3-3 formation but in order to secure the midfield, they formed a 4-5-1 against the ball while in deep defensive phase they switch to a 5-4-1 shape.

Anna Moorhouse started in the goal. Erin Simon and Claire Rafferty deployed in the full-back positions. The experienced Gilly Flaherty was in the middle of the defence. Next to her, Brooke Hendrix. The single pivot role fell onto Cho So-Hyun. Alongside her, Kate Longhurst and Ria Percival employed.

Upfront, Alisha Lehmann started on the right wing but she and Adriana Leon changed sides throughout the game. While Ross was in the centre.

West Ham were considered the underdog in this battle and more importantly, the opponent holds an almost 58% possession rate in this season. Therefore, Matt Beard chose to play cautiously which meant they formed a mid-block to stabilise his team and wait for the opportunities to attack and score.

West Ham’s plan was to negate City’s quick progression and attacking power. In order to accomplish this, they moved into a 4-5-1 shape which only occasionally pressed high. They rather focused on protecting the middle zones and blocking the passing lanes. Thus they followed the basic principle of pressing, as it looks in the image below. In addition to this, Manchester City’s formation in build-up was interesting. The full-backs moved forward while Scott and Walsh often created a double pivot in the middle. Weir had the licence to push forward and occupy in behind the Hammers’ second line.

Once the spaces were protected they started to press, especially when City tried to pass towards their centre-midfielders. Also, the back passes could trigger West Ham’s pressing movement. Here is an instance when West Ham pressed quite well. The ball passed to the centre-midfielder who was instantly pressed by the right-handed winger, meanwhile Ross started to press the nearby centre-back. 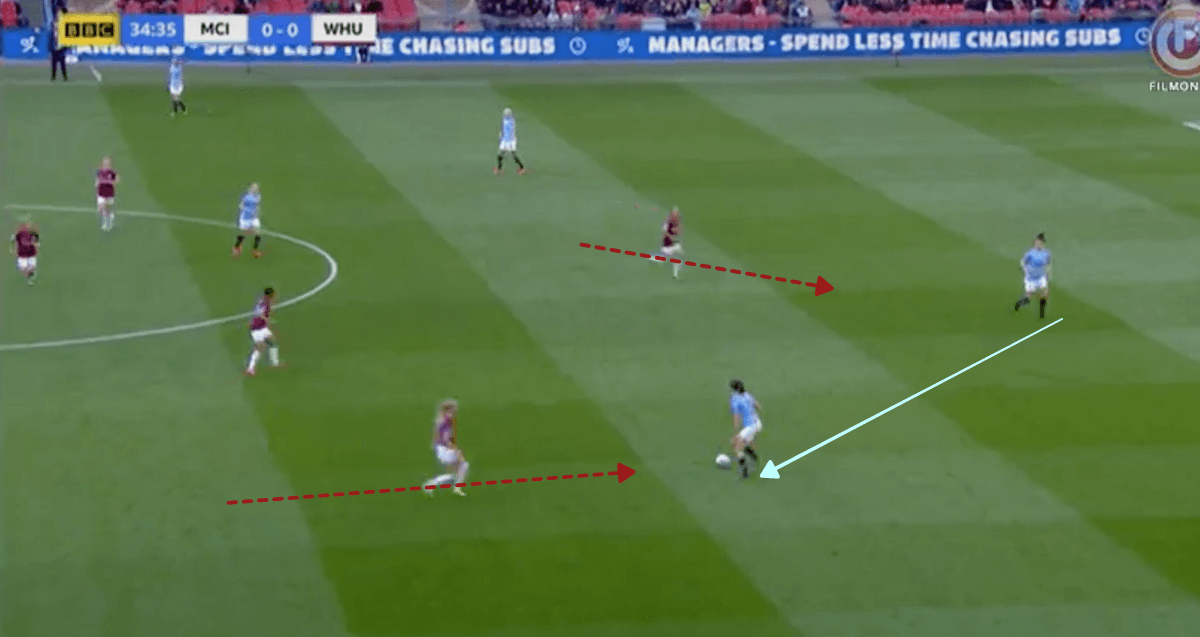 West Ham had some success in pressing as they won the ball back while forcing the opponent to play weak long balls. Also, there were a couple of occasions when they could win the ball and initiate a dangerous counter-attack.

City’s style of play is based on quick vertical progression to utilise the front players, especially Parris’ great skillset, thus they targeted the space behind the opponent’s defence to create opportunities for Parris who positioned herself inbetween West Ham’s centre-backs. This was evident right from the beginning of the game. For example in the eighth minute, when Parris was able to catch a long ball in behind the defence and run towards the goal.

Once they overcame the opponent’s press, they looked to play narrow which this time helped West Ham because they did not have to stretch the lines. This meant they could hold a compact shape and reduce the space, making City struggle to create chances in the final third. 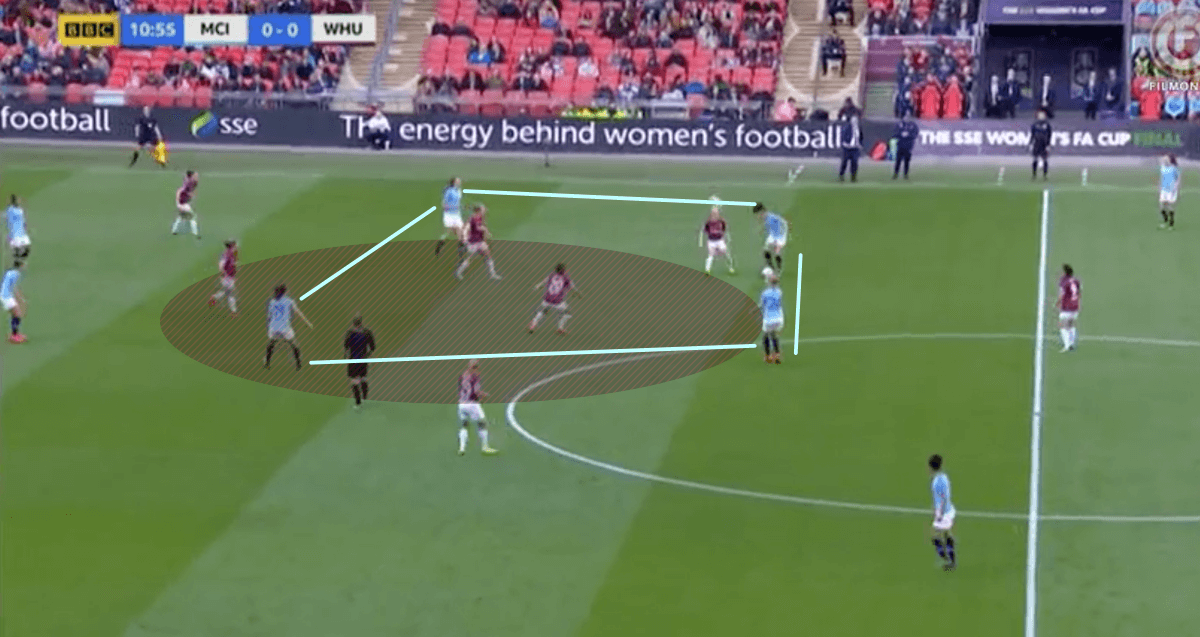 The far sided central midfielder also shifted to the ball side to give a passing option. They often created a situation where one player provided a horizontal option for the better passing angle and two players occupied in behind the opposition second line. In turn, it allowed them to easily win the ball back with effective counter-pressing.

One thing that was interesting in Matt Beard’s staggering in their build-up phase was the centre-backs. They took a very wide position, which seemed counterproductive since occupying too wide makes the ball circulation between centre-backs impossible. The opponent’s attacker would easily step in between them and block the pass route. Therefore a team with this setup immediately restrict their build-up to one side. To compensate this the deepest midfielder could offer an outlet. 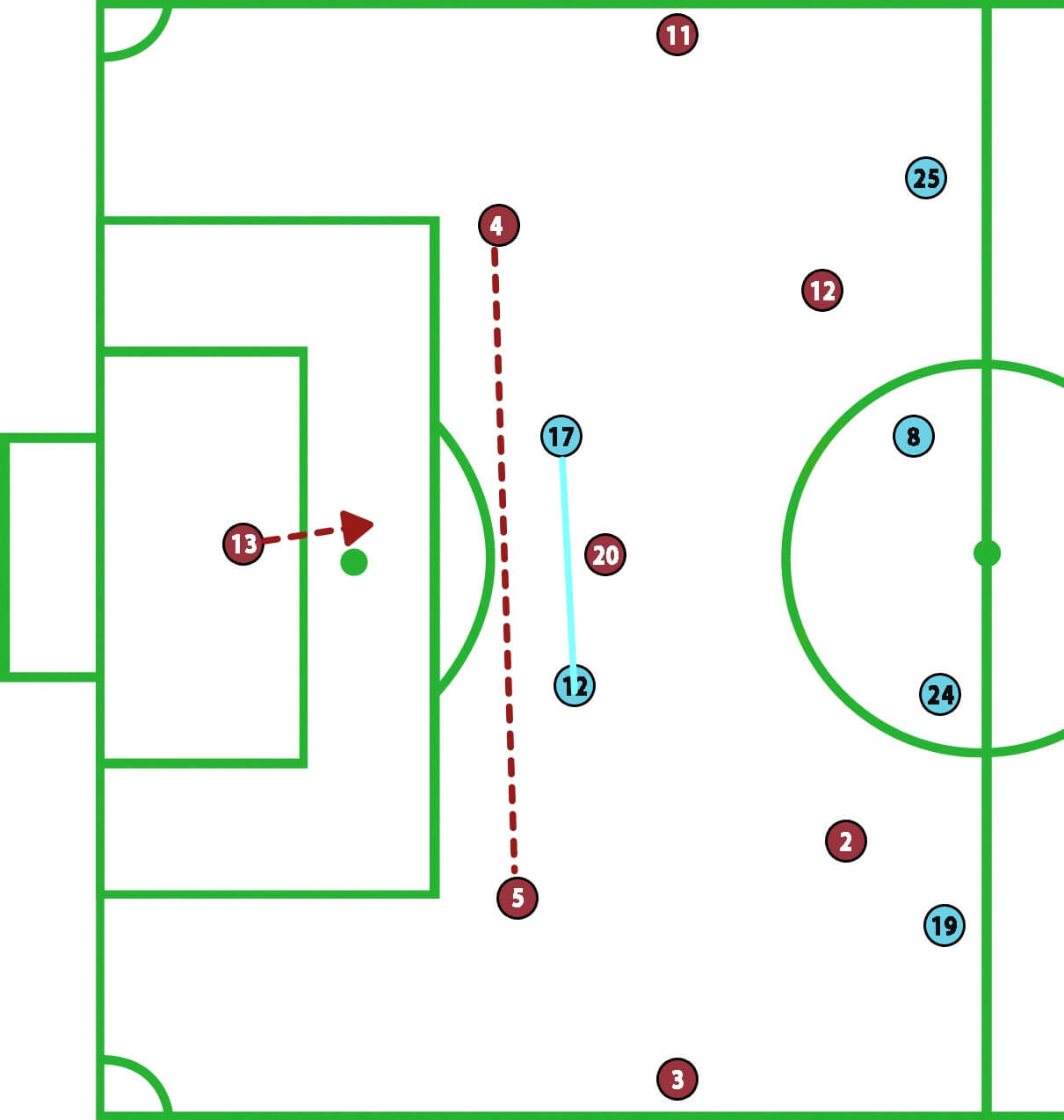 Although West Ham did not seem to care much about this. They used the goalkeeper to circulate since Cho was inaccessible. When the ball moved to one of the centre-backs, the nearby striker started to press her with a curved run. In these situations, West Ham tried to pass to the dropped midfielder but it was suboptimal since she had to face huge pressure due to City’s man-oriented pressing scheme. 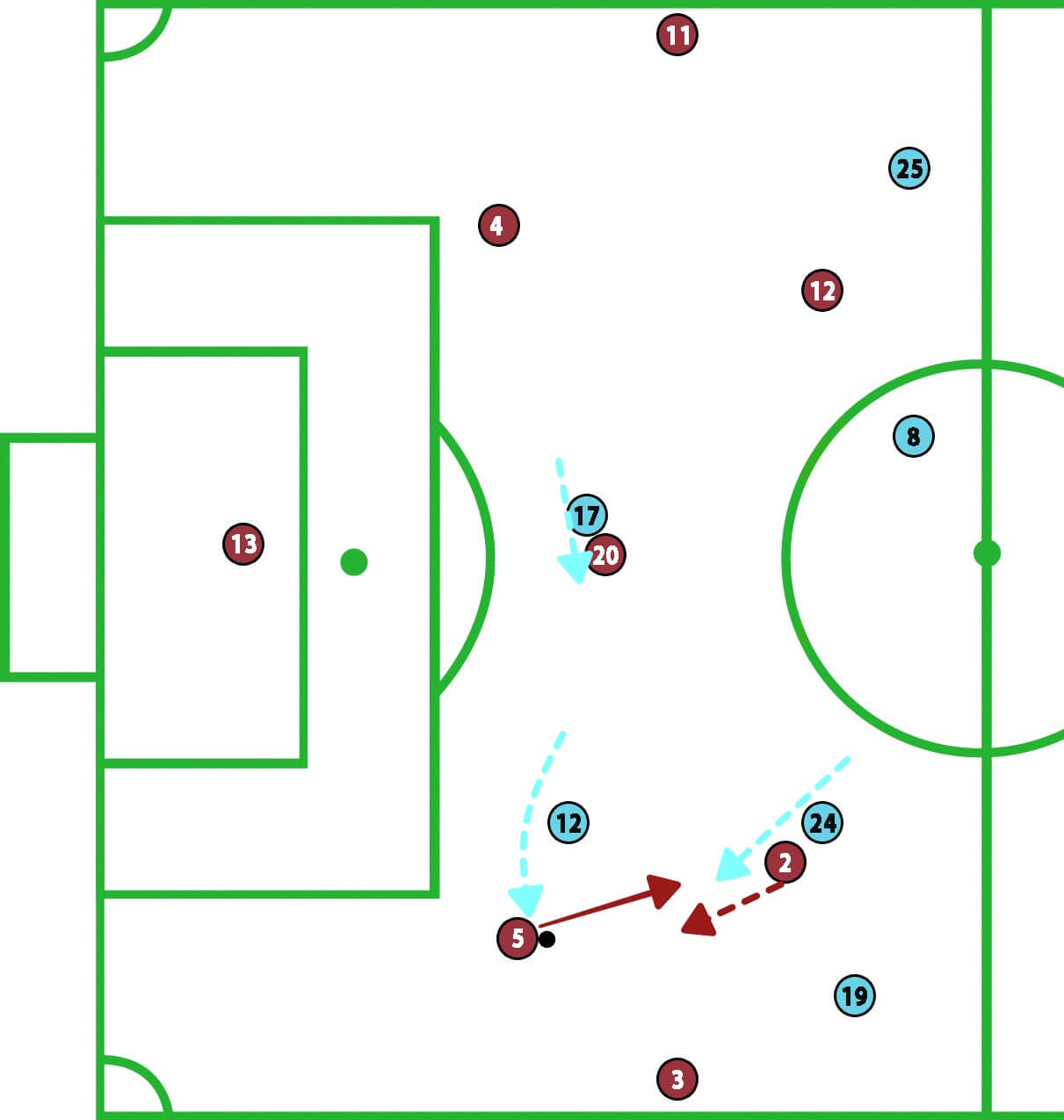 After the break, there were some adjustments in Manchester City’s play. First of all, they more likely to form a 4-4-2 shape with Wullaert dropped into the midfield. Although Weir often joined the first line. 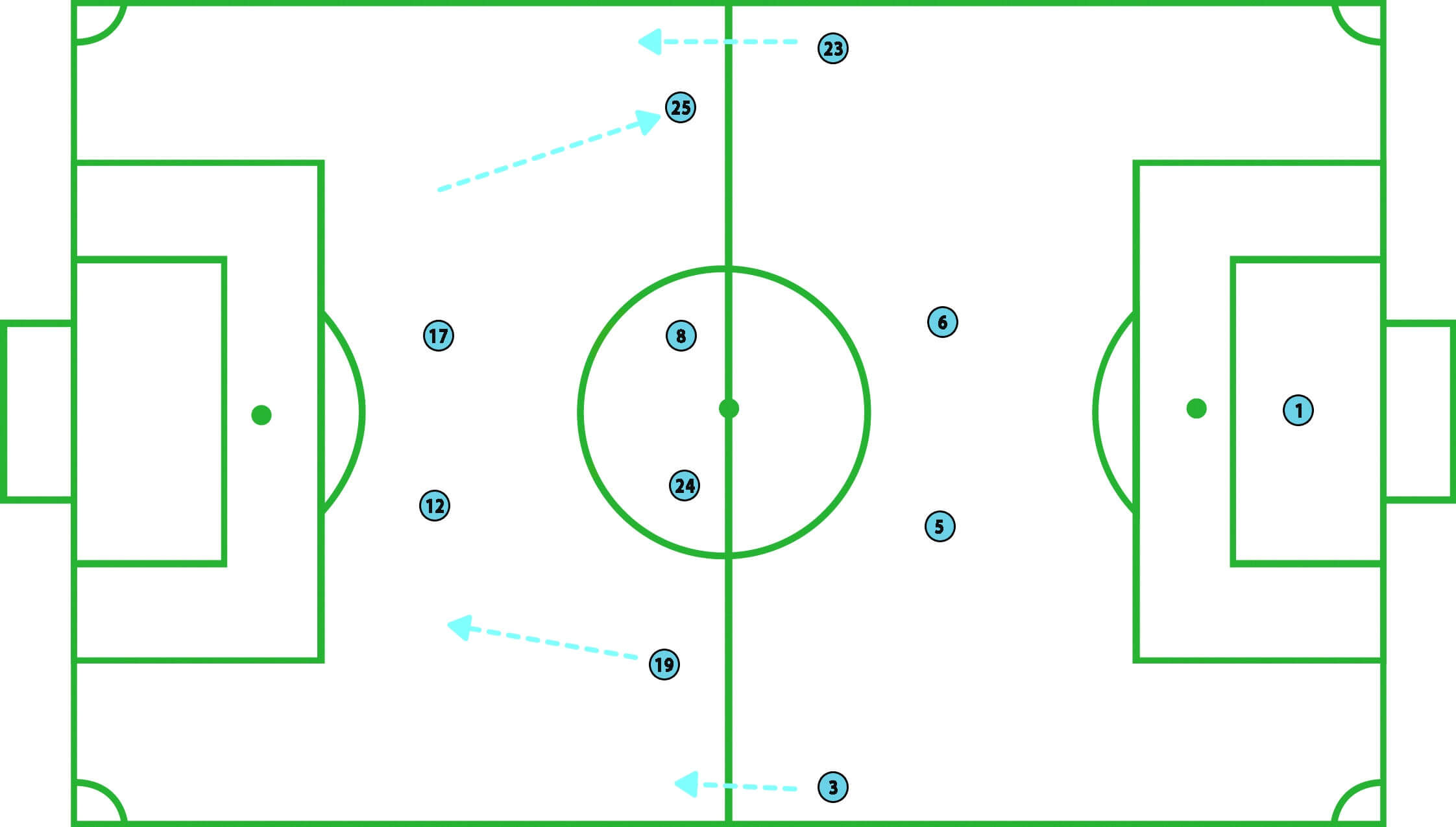 Secondly, City looked to use their full-backs more which stretched the opposition shape a bit. This led to the first goal when City made a switch of play towards Stokes on the far side, giving Walsh more space when she received a pass in the middle. Although the shot was a bit lucky.

With these adjustments, City gained more attacking power, especially after they got the lead and West Ham had to push forward to fight for the equaliser. This, of course, created more space for City which technically decided the whole game.

West Ham United displayed an impressive performance – mostly in defence – but overall, Manchester City were the better team which was more evident in the second half.