With the winter break in full swing, attention turns to Portugal where the semi-final second leg in the Taca de Portugal took place between Famalicao and Benfica. The first leg a week ago proved to be an epic battle between the two sides, with Benfica taking a slight advantage into the away leg after winning 3-2. The defeat, however, made it zero wins in the last five for the newly-promoted side.

In the end, it was Benfica who progressed as they overcame a plucky performance from Famalicão. The 1-1 draw means a victory on aggregate which takes Benfica through to a final in a competition they’ve not won since 2016/17. Porto awaits.

Some games immediately find a rhythm, falling into a pattern that’s immediately distinguishable. Other games, such as this, struggle to find a tempo and a lot of the time it’s down to how the two teams tactics align. That was the case in this match as both sides started the game in rigid systems designed to frustrate the opposition and not give away too much too early. 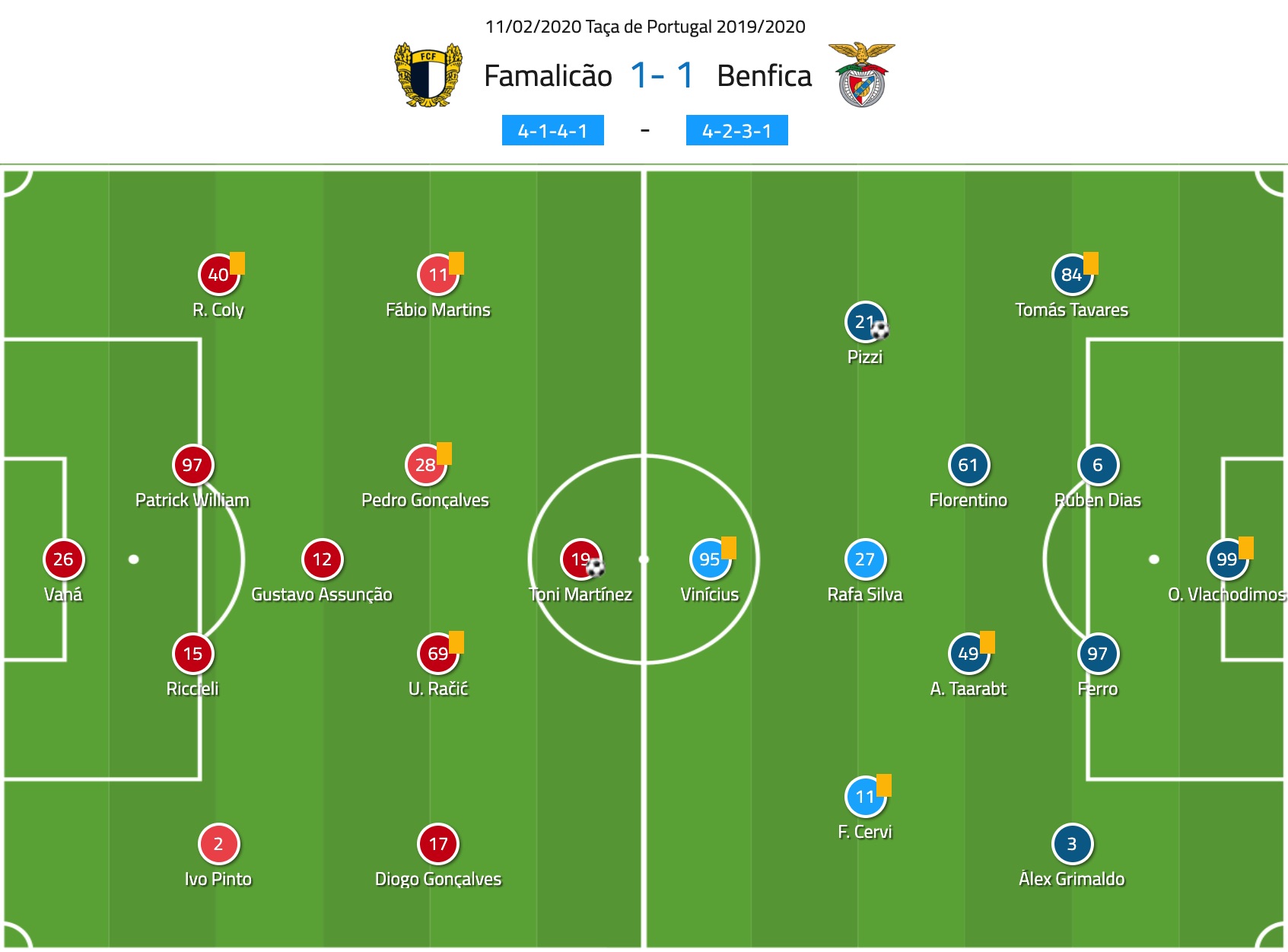 Benfica started in a 4-4-1-1 shape that shifted into a 4-2-3-1 in the attacking phase. Adel Taarabt and Florentino Luís started in the middle of the pitch. Their movement was limited, with their main duty being more defensive-minded. The pair rarely ventured beyond the ball as they looked to control the tempo from a deeper-lying role. Rafa Silva was handed the number 10 role, he was deployed to connect the midfield and attack when in possession. His (lack of) movement however, often meant options were limited for the ball-players behind him – as we’ll look at later.

Álex Grimaldo and Tomás Taveres were the full-backs for the visitors. With the double-pivots anchored positioning, they were allowed to move forward liberally and support the wingers using clever underlap movements into the half-spaces. Highly-rated Vinícius spearheaded the attack as the lone striker, supported by Franco Cervi and Pizzi.

The home side lined up in a fluid 4-3-3/ 5-4-1 system. The midfield trio consisted of Uroš Račić, Pedro Gonçalves and Gustavo Assunção who sat in a more defensive position to protect the defensive line. The front three included striker Toni Martínez and the two wingers Diogo Gonçalves and Fábio Martins. All three remained in advacned position whilst their team defended, as they sought to exploit Benfica using fast offensive transitions.

As we can see above, Famalicão struggled to maintain long spells of possession, instead opting for longer, direct passing through the vertical lines. They averaged just 4.43 passes per possession. The obvious lack of connection between Martínez and the rest of the team demonstrates how the striker was rarely needed in build-up play and instead required to get in behind and chase low-percentage passes.

Out of possession, Famalicão initially operated from a lower, rigid shape as they settled into a dense 5-4-1 shape. Once conceding, however, they transitioned to a more aggressive man-to-man press where they achieved a PPDA of 7.31. We can see the average position of the full-backs was a result of the restriction placed on them by the attacking opposition. Both Racine Coly (40) and Ivo Pinto (2) were forced to stay narrow, protecting their centre-backs from exploitation in the half-spaces. When the ball did go wide, it then required the Famalicão shape to shift laterally as a unit. If this didn’t happen in unison, problems occurred as we look at later.

Benfica struggled to dominate also, as possession turned over constantly. In possession they looked to play out from the back, splitting their centre-backs and pushing their full-backs forward. Taarabt and Florentino dropped deep to collect the ball and then looked to connect with the attack. This is where a lot of the attacking troubles occurred for Benfica as there was often no option but to play a hopeful long ball. This resulted in them achieving an xG of just 0.77.

Out of possession, the visitors were robust. They opted not to press aggressively – achieving a PPDA of 17.4 – and instead dropped back into a rigid 4-5-1 shape. This restricted their opponents, who as discussed, were reliant on exploiting slow defensive transitions. That’s not to say the system was fool-proof however, as the home side still managed an xG of 1.51.

Despite leading the game for the most part, the visitors were actually outplayed from an attacking perspective. Benfica’s xG was half of their opponents, visibly demonstrating their trouble in creating quality chances.

In the first stages of their build-up, Benfica were neat, using a slow tempo and overloads in the defensive third to work the ball to their double-pivot. This was made easier when the Famalicão system was operating passively.

It was at this stage where things became disjointed for the visitors. With Taraabt and Florentino not possessing the pace and guile to dribble through the pressure, a pass forward from this point was the only option to develop an attack.

We can see above that Famalicão did a great job at blocking the passing lanes as a cover shadow as they move to close down the ball. The full-backs of Benfica are already too advanced, with the passing lane now blocked, the pass wide to develop an attack isn’t an option.

As a result, the attacking players have become completely disconnected with the defensive unit who are forced to turn backwards and recycle possession.

Above we can see how Benfica also missed good opportunities to break through the lines using sharp, accurate ground passes. Again, the situation has arisen where the defensive four have built possession, this time, however, the Famalicão players have dropped off completely, giving Benfica time and space to pick penetrative passes. With the defensive line now so deep for Famalicão, the attacking players are able to find an open passing channel in between the lines (two highlighted above).

One driven pass into feet would penetrate the midfield line of Famalicão and cause them problems as they tried to recover. Instead, Benfica looked for longer lower percentage passes, which rarely came off. The visitors achieved a forward pass success rate of just 65.41% because of their poor choice of passing.

Below is an example of the rare occasion it did come off. The long ball from Taraabt has found Cerci who has pulled wide into space. The full-back who remained tight alongside his centre-back is now drawn out of position towards the ball. With the switch of play happening so quickly, the rest of Famalicão’s shape is too slow to react, prying spaces open in the half-spaces as we see below.

Grimaldo, already in an advanced position, notices the space and exploits it with a penetrative underlap run, which is found. From this point, Grimaldo is able to put a dangerous ball in the box for his strikers to attack. 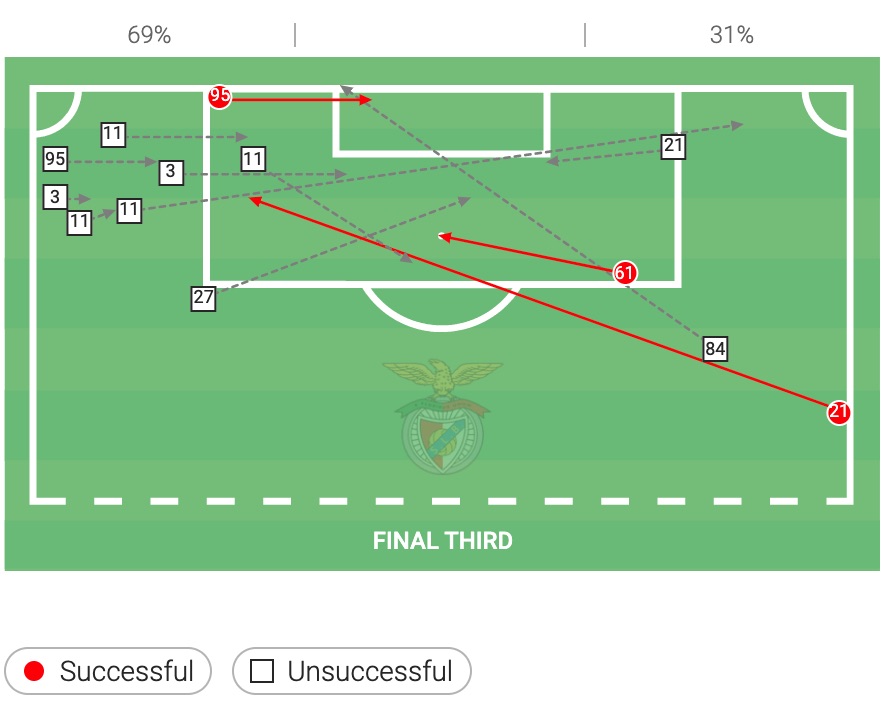 Too often though, the Benfica final delivery wasn’t up to standard and the crosses were unsuccessful. With this being the case and the side struggling to break Famalicão down using passing through the lines, its no surprise then that the visitors ended up with just 0.77 xG.

Based on the quality of chances created by either team, Famalicão can consider themselves unlucky not to have booked their place in the final. We can see from the xG maps above that the hosts created higher quality opportunities than their guests. Famalicão’s 16 attempts yielded them an xG of 1.51, compared to Benfica’s seven shots amassing just 0.77. 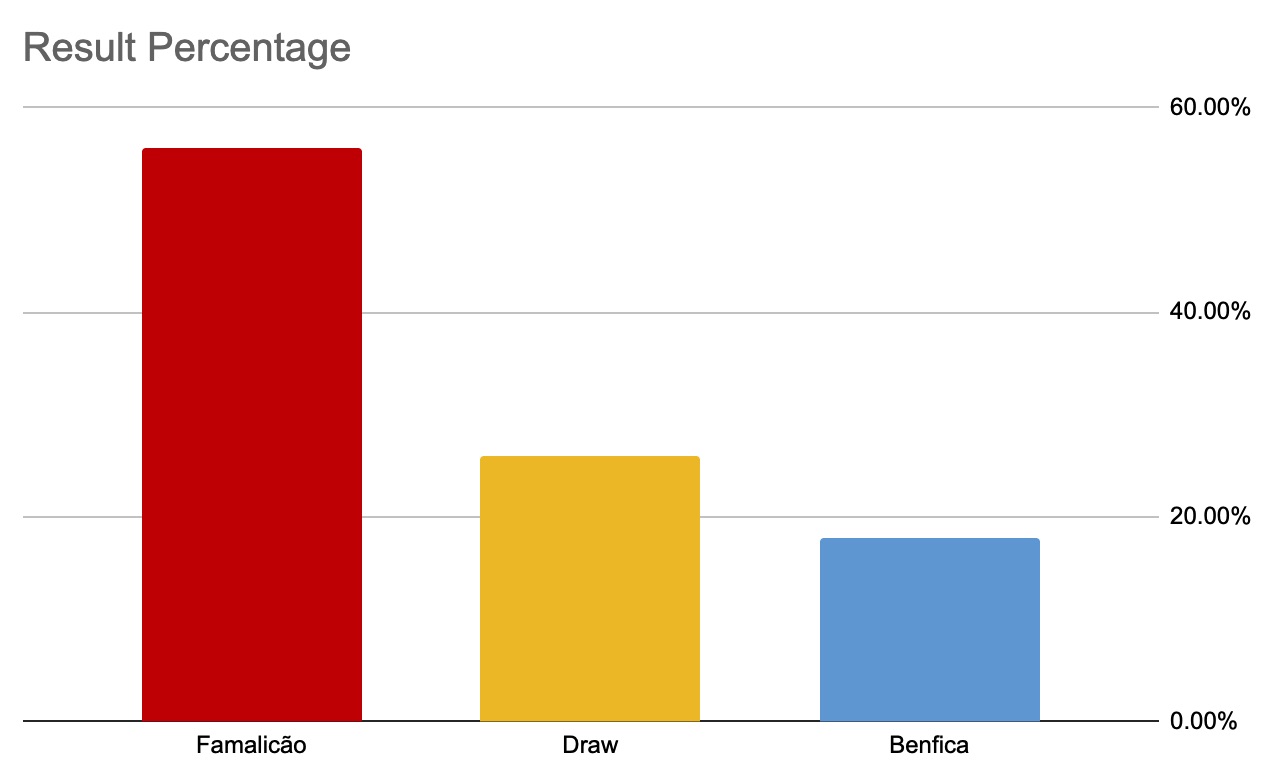 Crunching the numbers we can turn these xG figures into an expected win percentage based on the quality of chances created by each side. Looking below at the graph, the results are obvious, Famalicão deserved to win on the night. If the game was played identically an infinite amount of times, the hosts would expect to be victorious 56.12% of the time. Benfica’s low-quality chances reduced their chance of winning to just 17.97%, leaving the likelihood of a draw at 25.91%. Sadly though, for the newly-promoted side, these chances weren’t converted on the night and a big opportunity to make club history was missed.

This was a laboured performance from Benfica. The first leg victory gave them a platform to comfortably see themselves through to the final. Instead, their tactics were too rigid and robust, not allowing enough room for creativity to flourish. Whether attention is focused elsewhere on other competitions is unknown, but one thing is for certain, they’ll need to be better if they want to beat Shaktar Donetsk later this month.

Famalicão gave a great representation of themselves in this fixture. Despite coming into the tie in relatively poor form, the home side turned up on the night. The tactics deployed were considered yet adventurous and as we’ve seen above, they nullified a good Benfica side whilst creating chances of their own. By keeping themselves in the tie going into the second leg, Famalicão gave themselves a chance, a chance that statistically on another night could have taken history on a different pathway.