Football is firmly in the era of big data and analysis. This follows the trend that began in baseball with the application of sabermetrics known as “Moneyball” in the early 2000s and in basketball with the application of valuing shots known as “Moreyball”. I previously wrote, Premier League Moneyball, about the change towards fewer low-value shots from outside the penalty area in the Premier League and now turn attention to Serie A. Through looking at the statistics is there a trend towards better more efficient shot selection and less low percentage shots in Serie A? Secondly, when did this trend begin?

Daryl Morey of the Houston Rockets in the NBA led the revolution in basketball where he saw the benefit of removing bad shots from the game. The 2011 season was the beginning of Morey going all in on his strategy. He sought to remove bad low percentage mid-range shots. Morey put a value on each shot and sought to maximise high-value shots which are layups and three-pointers. This change in strategy is now so pervasive that it has changed the entire NBA. Three-pointers and layups are the norm across the league.

Is better shot selection also occurring in Serie A?

The chart below shows the total shots by season for the Premier League. There is a clear steady decline. 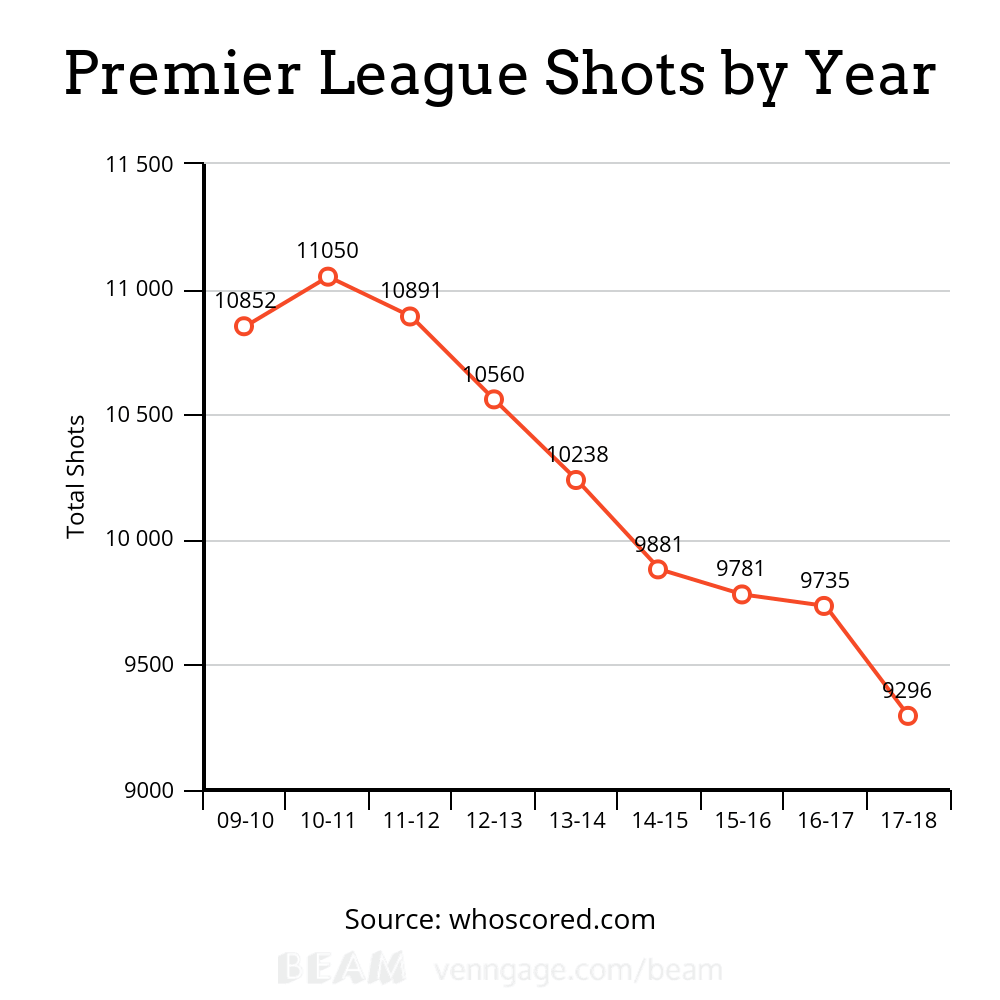 Here is the chart on Serie A shots by year. 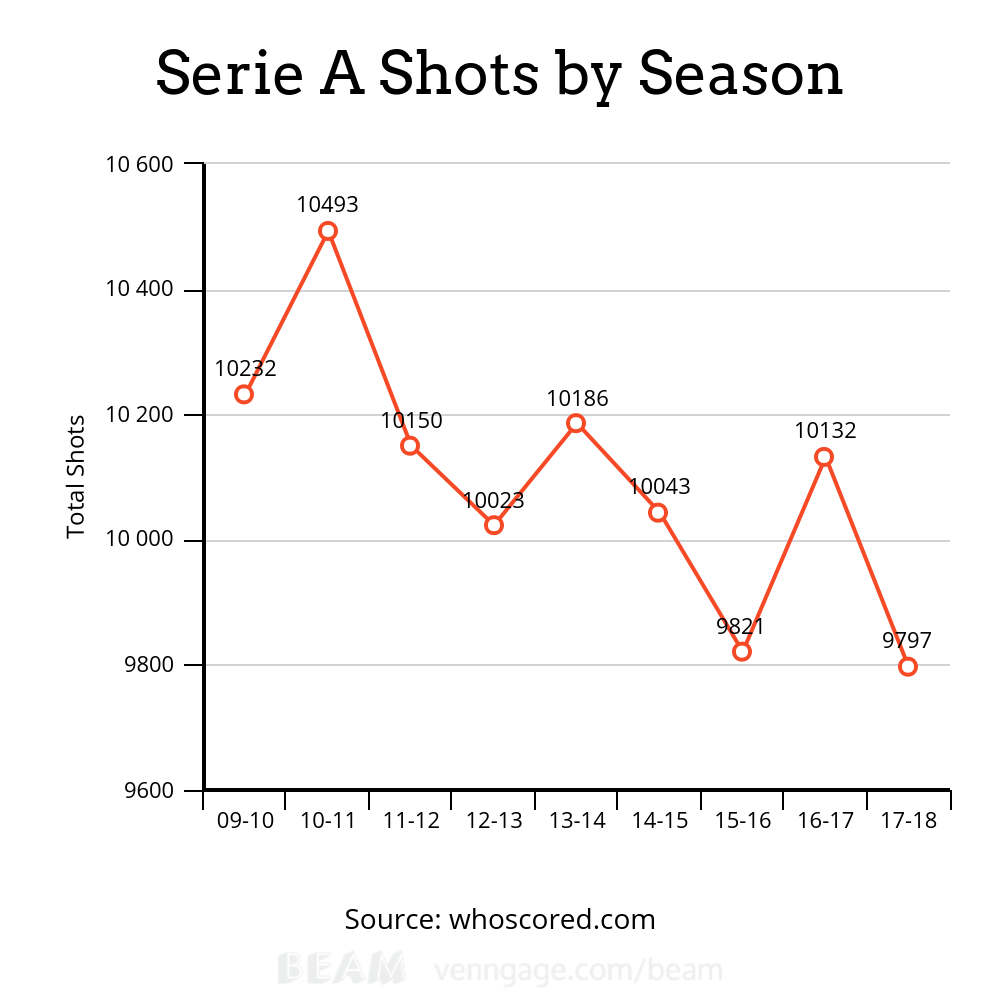 As you can see there is a much different trend line between the two leagues. Serie A has a generally declining trend line, but not nearly as cut and dry as the Premier League.

Shots from Outside the Box

Here is the Premier League chart of total shots taken from outside the penalty area by season. 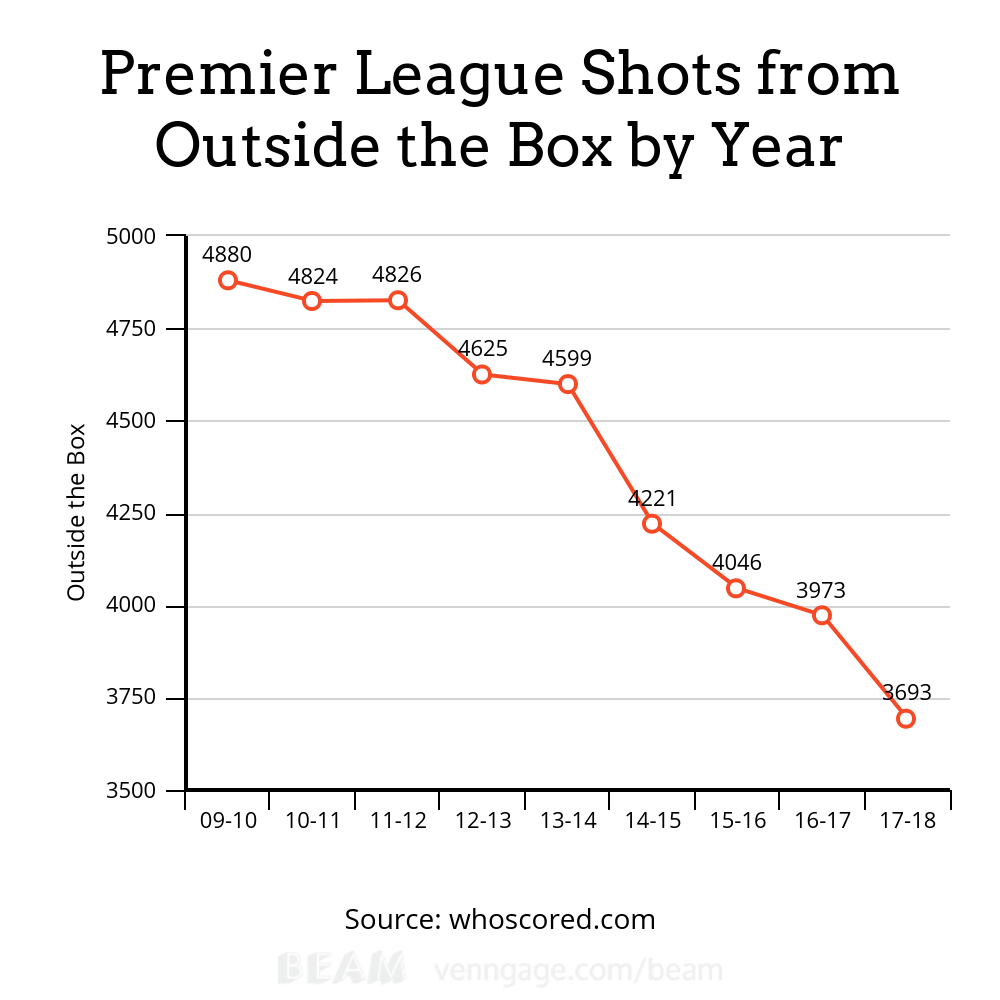 The chart above shows another clean steady decline in the Premier League. The trend line is steeper than the total shots trend line. Less low value outside of the box chances are been taken each season. The largest drop occurs following the 2013-2014 season and the 2016-2017 season.

Below is the Serie A chart of total shots from outside the box by year. 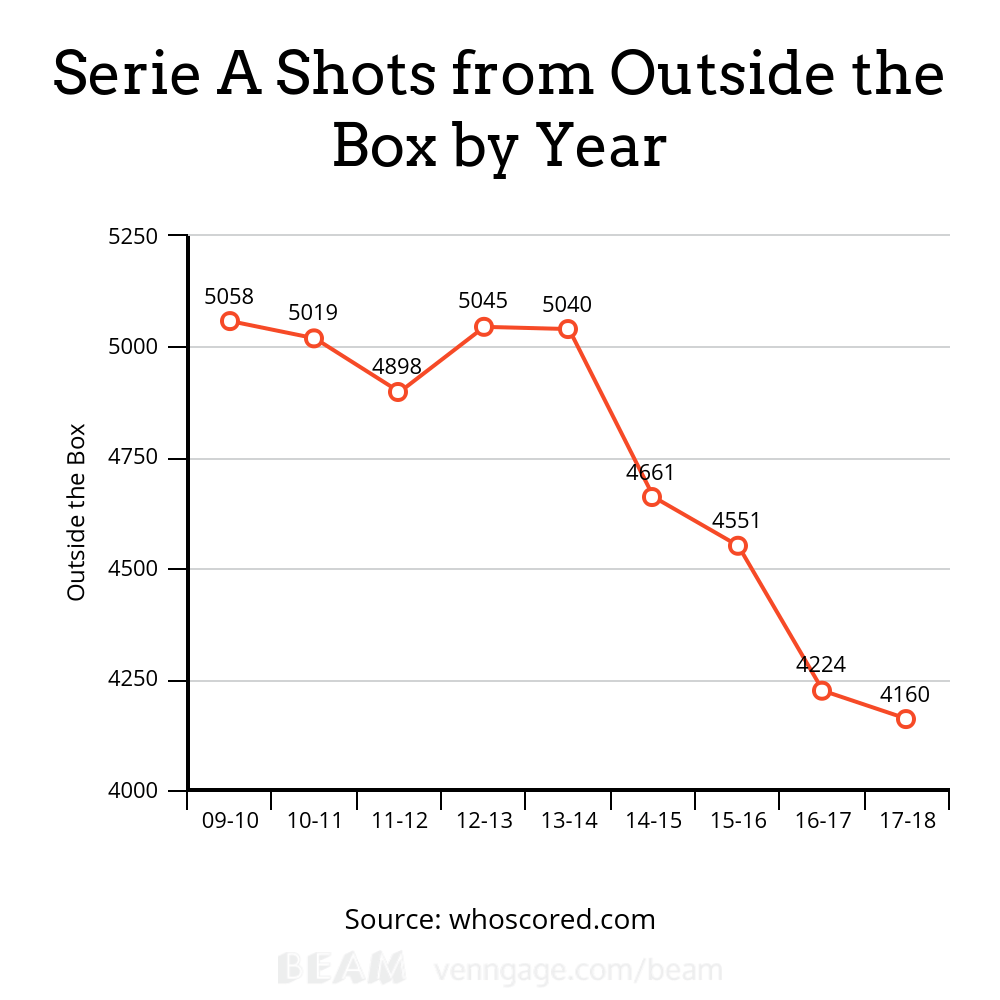 From the 2013-2014 season to the 2017-2018 season there is a precipitous drop in the number of shots taken from outside the box for both leagues. The data for the Serie A and Premier League outside the box shots mirror each other.

Less than 40% of Shots from Outside the Box

Let’s look at the number of teams that take less than 40% of shots from outside the box in each league. This will indicate how pervasive among the teams this trend of taking less outside the box shots. 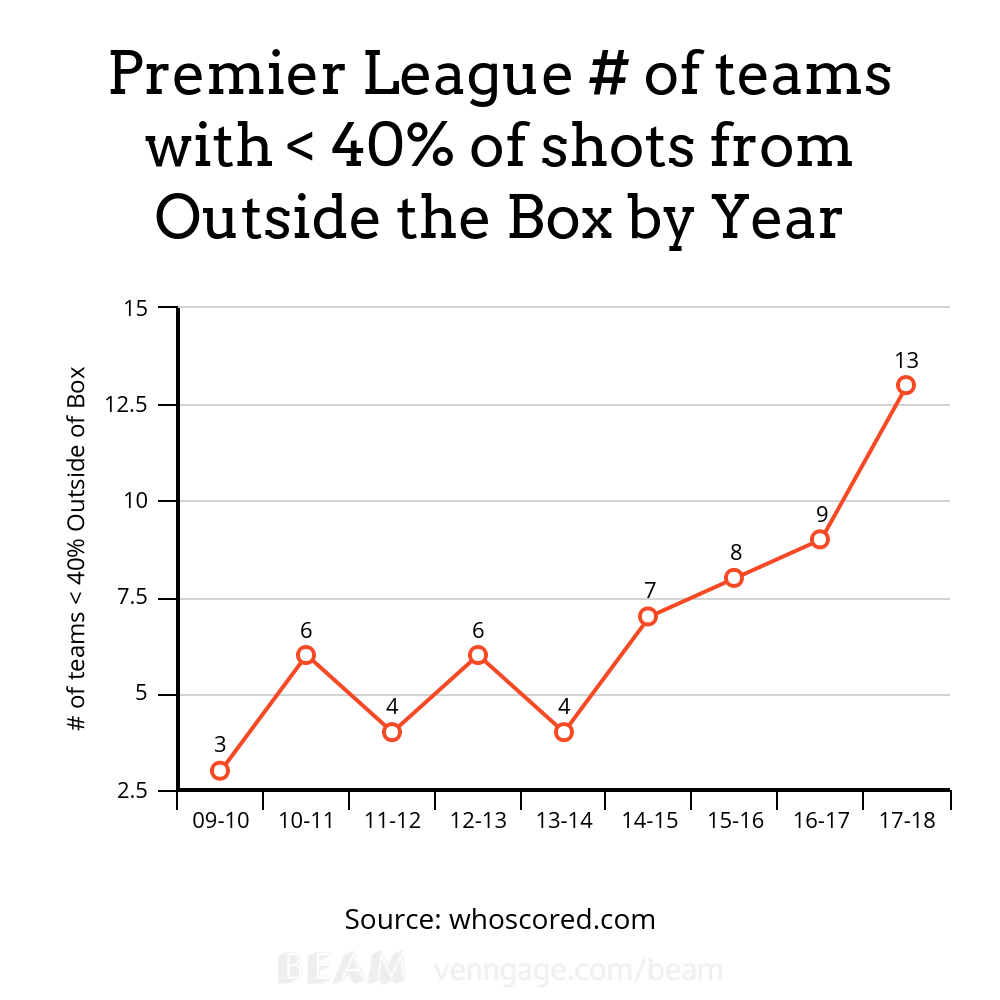 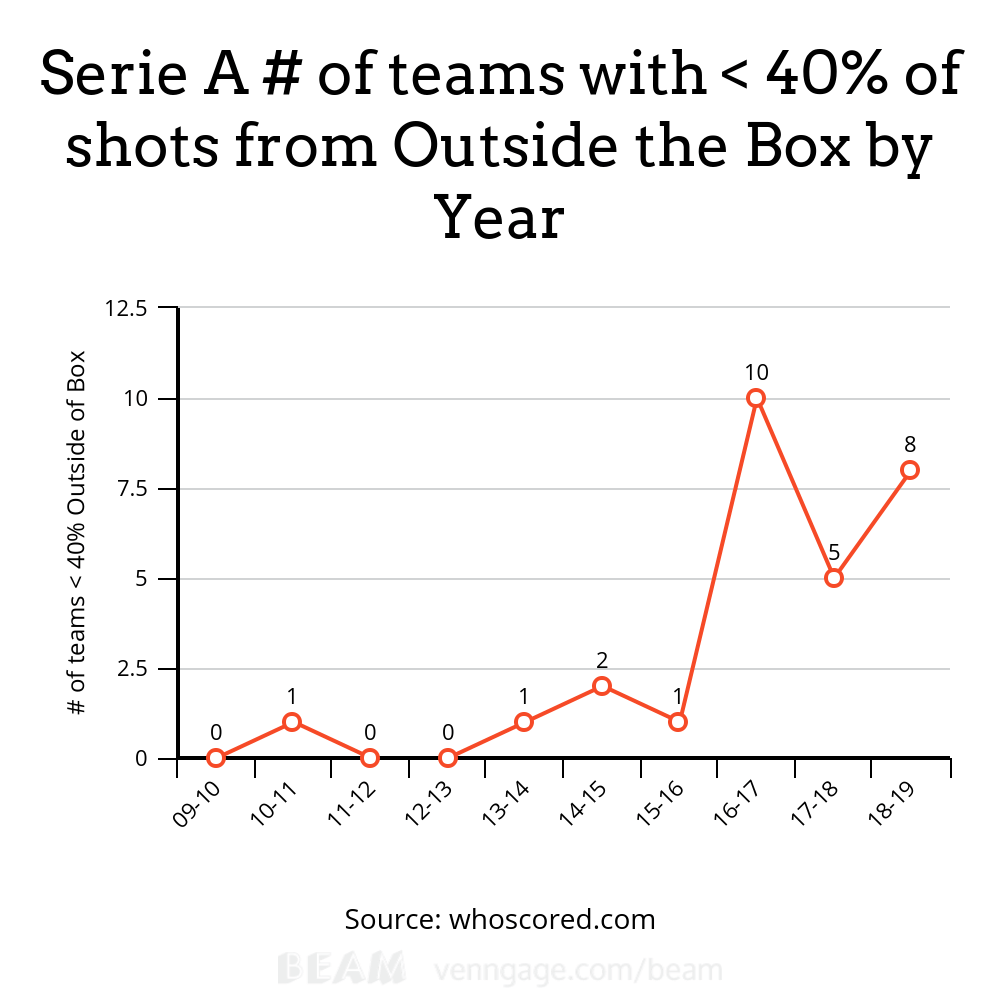 When Did This Happen?

The data shows that the shot selection improvement began in both leagues after the 2013-2014 season. This time frame not surprisingly coincides with the advent of xG.

Sam Green posted a blog for OptaPro on April 12th, 2012 that entitled “BLOG: Assessing the performance of Premier League goalscorers”. In the blog, Sam Green explains a model for Expected Goals (xG).

“This report aims to show how OptaPro can define what makes a good chance as opposed to an average one, which players are more effective than the quality of their chances would suggest and how goalkeepers’ performance can be measured effectively.”

Prior to Sam Green’s blog post expected goals was in its infancy in ice hockey but virtually not found in football. Google search for “expected goals” in reference to individual football shots is non-existent prior to Sam Green’s post. After his blog, more data analysis went into valuing football shots. Since the 2013-2014 season, there has been a steady march of better data modelling and clear application of the data on the playing pitch.

Tactical analysis has happened since the first kick of a ball. Most of it was based on the eye test and instincts of coaches and players until the recent era of big data and data analysis. Since the 2013-2014 season, the Premier League and Serie A have seen a coinciding change in shot selection. Teams across both leagues are clearly putting resources into the value of a shot. Placing a value on each shot taken and coaching shot selection is a great concrete area where data and coaching intersect.