Another transfer window has now been open for a few weeks and once again AC Milan have managed to create some optimism with their deals. Lucas Paqueta and Krzysztof Piatek have been brought in to much excitement. Both were given run-outs in the Serie A clash with Napoli on Saturday. This tactical analysis looks at the tactical trends of the game.

AC Milan lined up in their normal 4-3-3 under Gennaro Gattuso which saw new signing Lucas Paqueta partner Franck Kessie and on-loan Chelsea man Tiemoue Bakayoko in midfield. Goalscoring sensation Piatek started on the bench. Napoli missed the likes of Allan and Marek Hamsik which meant their team was really attacking with a central midfield duo of Piotr Zielinski and Fabian Ruiz looking to balance an attacking quartet of Insigne, Mertens, Milik and Callejon.

Milan have been given a lot of stick this season but they are fourth in Serie A despite having a squad few would consider among the top four squads. It’s easy to argue for Juventus, Inter, Napoli and Roma having better squads, and possibly even Lazio too. Gattuso is therefore doing a pretty good job at the moment. One of their impressive aspects against Napoli was their possession play. Milan always looked to build from the back and they did it reasonably well against a good pressing side.

The below image highlights the basic setup whenever Milan tried to build from the back. Napoli’s 4-4-2 meant holding midfielder Bakayoko was always left free. Milan exploited this really well. In this first image we see how free he is as Napoli’s man-orientated pressing focuses on other players. The ball has been passed back to the goalkeeper. 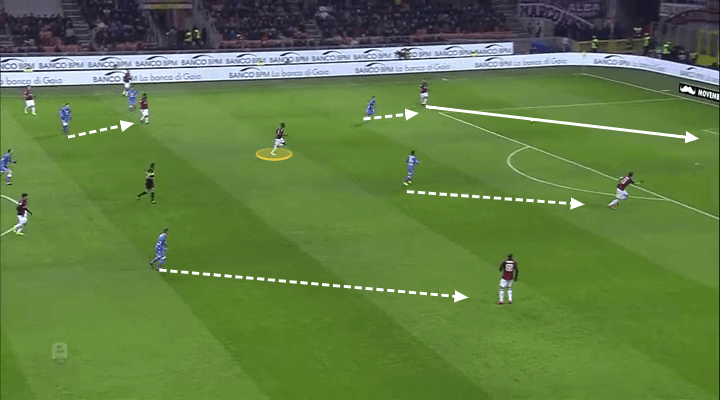 The below image is a continuation on the above image. Donnarumma passes the ball to Bakayoko who instantly lays it off to Musacchio who can move forward with the ball. Napoli’s press has been broken. As I’ve highlighted Ruiz is forced to make a long run to try and provide pressure on Bakayoko but the distance was too far and he made the run in vain. 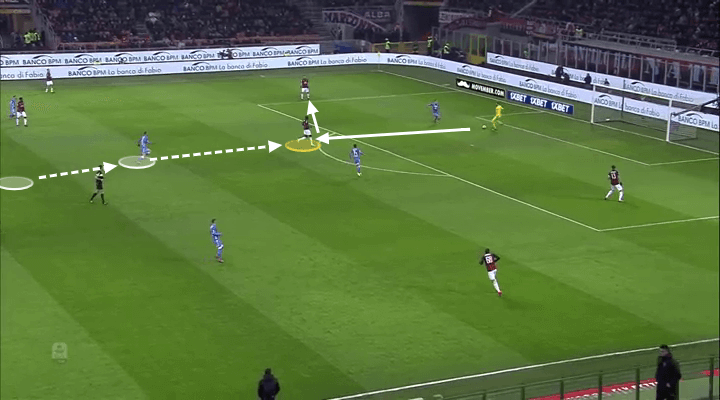 Below is another example about how Milan’s use of Bakayoko broke Napoli’s press. Again Bakayoko is alone with oceans of space. Musacchio plays the ball into the Frenchman who turns and progresses the ball. Napoli did better in this regard in the second half when the strikers started back-pressing Bakayoko a bit more. In the first half however this was an easy escape for Milan. 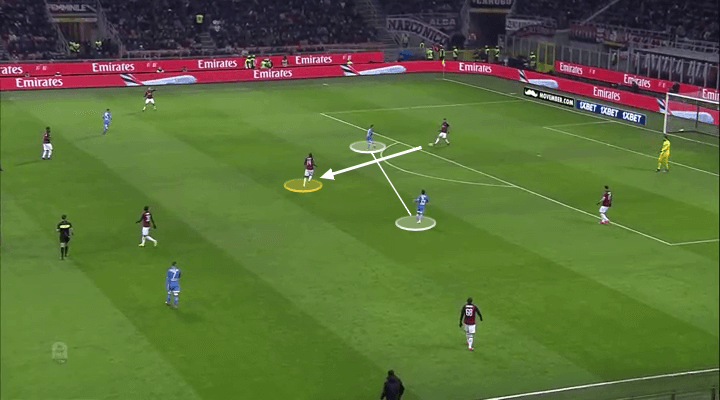 The signing of Paqueta has given AC Milan a really good attacking option in the left-sided half-space. The Brazilian’s close control and short passing is very impressive and he showcased these abilities against Napoli. Below I’ve highlighted one of AC Milan’s best moves of the game.

Throughout their 69 minutes together the combination between Calhanoglu and Paqueta was superb. Here Calhanoglu starts the move by laying the ball off to Paqueta who instantly plays it into the space between the lines. Calhanoglu then plays a first time pass in behind Napoli’s defense to Cutrone who finished wide. 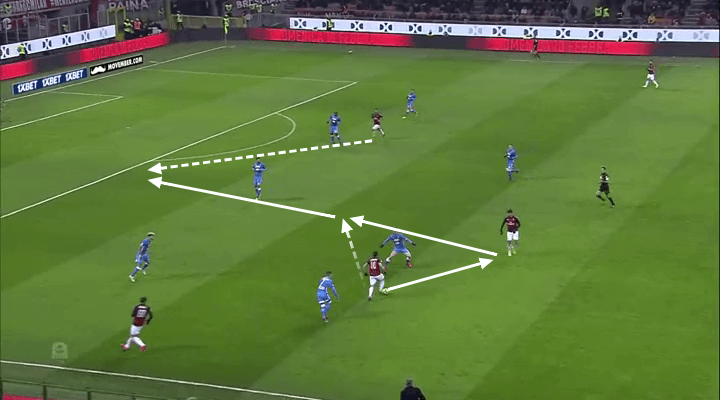 Paqueta demonstrated a great understanding of space, especially in the below scene when he moves higher into the space between the lines rather than moving towards the ball. This is a potential gem for Milan. 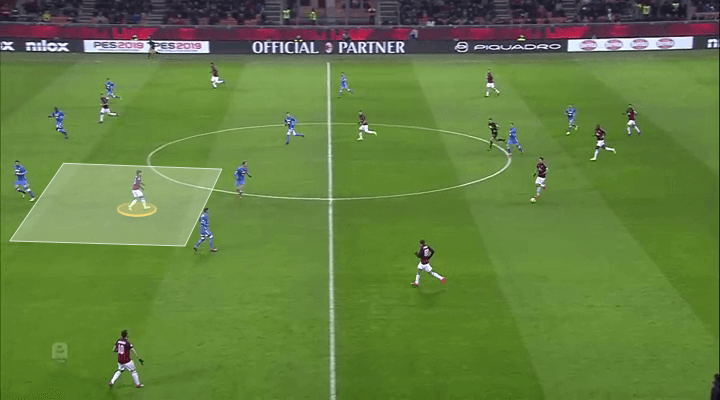 Below is another example of his understanding of the game. Milan rotated their wingers quite a bit and here we see how Suso (yellow) has moved all the way across from the right wing. Realizing that, Paqueta (white) moves higher to allow Suso that space. Additionally, Calhanoglu (black) stays wide to create two passing options for the ball-carrier Rodriguez. This is really clever positioning and movement from Milan’s attacking midfielders. 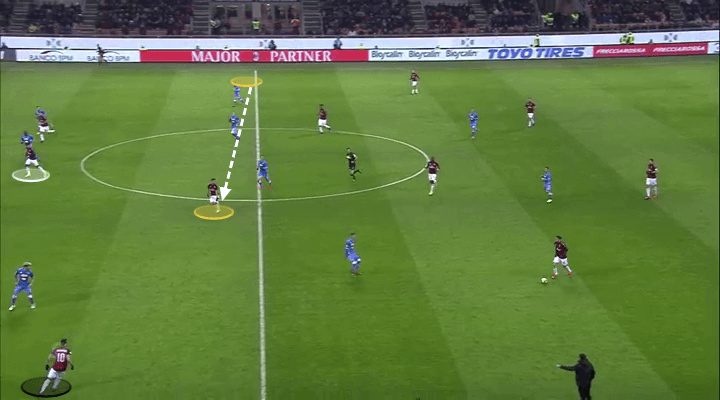 AC Milan impressed with their possession play but they still lack the final touch in the penalty area. Maybe Piatek is the answer to that issue.

Gattuso had some clear ideas in terms of how he wanted his team to defend against Napoli. They lined up in a compact 4-5-1 and prioritized their positional defending by trying to retain a compact shape at all times rather than marking opponents. As you see below they tried to deny Napoli space between the lines where Insigne and Mertens thrive. 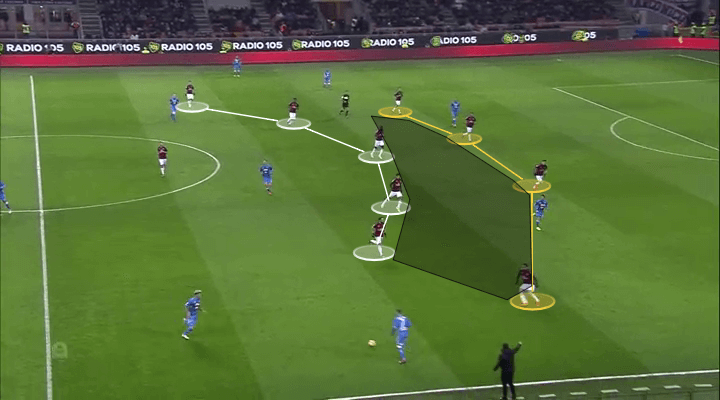 A key component of Milan’s defensive setup was the positioning of Paqueta. As shown below, they often had Kessie (white) push up to press either Koulibaly or the dropping Zielinski. Bakayoko then shuffled across to cover the Ivorian while Paqueta followed to remain in contact with Bakayoko.

This is basic stuff when defending positionally but we’ve seen weaknesses from Milan in these little details which has been ruthlessly exploited by opponents. Now Paqueta’s positioning gives Milan more solidity and helps them remain compact centrally rather than leaving gaps. 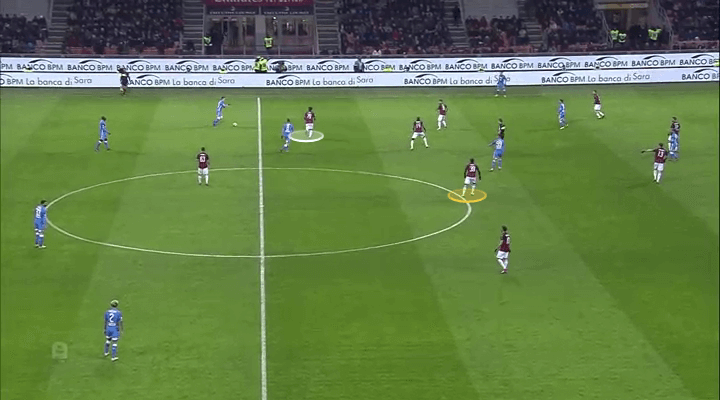 It was also really interesting to see, as in the image below, how Calhanoglu (white) and Paqueta (yellow) sometimes changed positions defensively. As I mentioned above Paqueta’s positioning was good so it was quite the surprise to sometimes see him defend wider with Calhanoglu centrally. The reason for this can possibly be that Gattuso wanted Paqueta’s speed and intensity in order to get out quickly and press when Napoli shifted sides in attack. 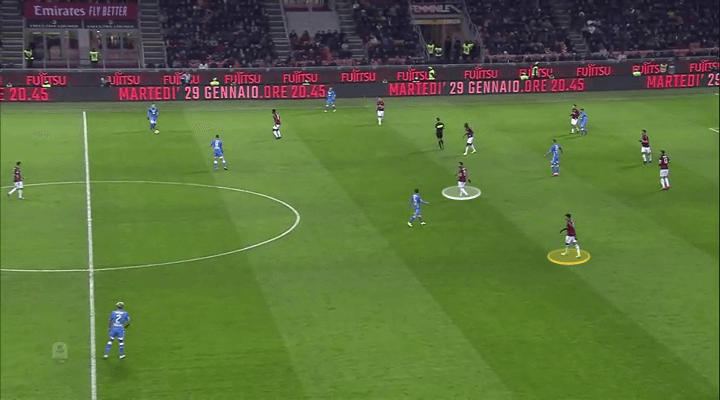 Below is another example of Calhanoglu (white) centrally pressing Ruiz alongside Kessie (pink) while Paqueta (yellow) stays wide on the left. 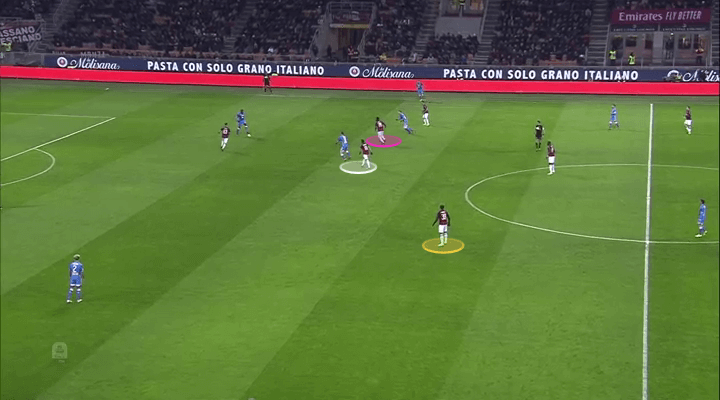 This was certainly unconventional from Gattuso but with Milan keeping a clean sheet it’s hard to say it didn’t work. Their defending was largely good and Napoli struggled to create really good chances, particularly in the first half.

Carlo Ancelotti’s Napoli have been very good in the Serie A and their consistency has been remarkable. If not for the superb Juventus they would have been leading or at least very close to leading Serie A. Their attacking ideas against AC Milan was some of the recurring patterns we’ve seen from the Partenopei over the last few seasons.

As you see below, Napoli created more central options by moving left winger Insigne into the half-space with left-back Mario Rui (white) providing width on the left. Mertens would often drop off into the space between the lines while Callejon remained wide on the right and right-back Malcuit thus stayed deeper. The below image highlights both Insigne and Callejon drifting inside to form a midfield box with Zielinski and Ruiz to create a 4 vs 3 in midfield. Mertens was wide on this occasion. 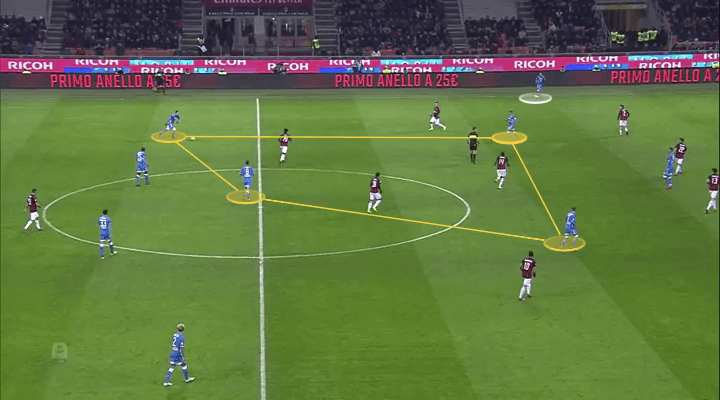 One of the trademark moves of Maurizio Sarri’s time at the club was Insigne playing lofted crosses towards the back post to the onrushing Callejon. They created their best chance in the first half from this particular move as illustrated below. The presence of both Milik and Mertens in the box attracts the attention of the three Milan defenders with Rodriguez focusing on Mertens. Callejon is therefore free but Donnarumma saves his volley. 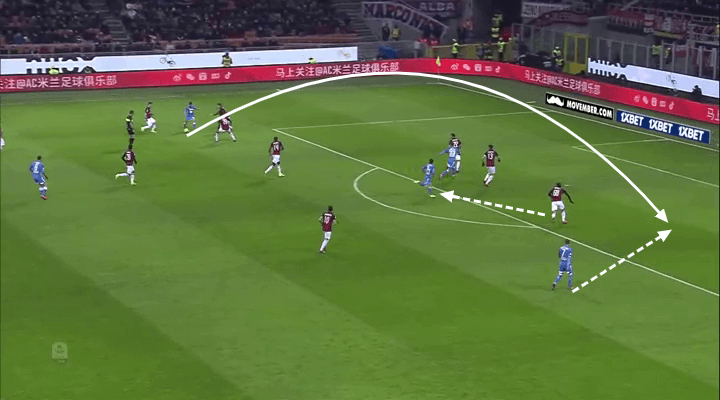 Callejon’s off-the-ball runs were threatening throughout and Napoli continually looked for him in behind. Below, Zielinski looks for the Spaniard who attacks the empty space behind Romagnoli. On another day these moves would have resulted in a goal but Napoli couldn’t find a winner on the night. 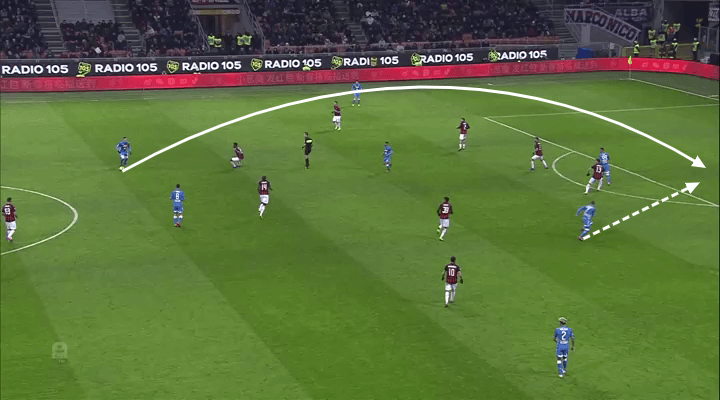 The Serie A game ended goalless which means Napoli lost the chance to claw back a few points on Juventus. For Milan it meant they missed the chance to strengthen their hold over fourth place in Serie A. In an entertaining game both sides showed their quality, but Milan will take more positives from this clash adding to the excitement of the new arrivals.