This weekend of Serie A action saw Roma travel to Verona in a bid to keep hold of their current Champions League qualification spot. Roma were beginning to gain some momentum having won three out of their last four Serie A games and they were up against a Verona side that found themselves only five points off a European place next season.

There was no upset to be found here however as Roma ran out 3-1 winners away from home. Verona attacked Roma throughout the match and stood toe-to-toe with their rivals for as long as they could but late goals at the end of both halves saw the Verona-based club falter to their sixth loss of the season.

This tactical analysis will detail the ebbs and flows of this clash and explain where the game was won for Roma. We will examine the tactics on display and illustrate the impact they had on the game through our analysis.

With Nicola Zaniolo missing for the Roman side, there were new spots in the lineup for Amadou Diawara and Lorenzo Pellegrini to take up in Paulo Fonseca’s 4-2-3-1. The Portuguese manager also rotated his centre-backs with Federico Fazio enjoying a rare time on the bench as Chris Smalling partnered Gianluca Mancini in front of Pau Lopez.

Verona were listed as being lined up in a 3-4-1-2 formation although this was difficult to identify for the most part during the game for reasons we’ll get into. Salvatore Bochetti featured at centre-back for the home side on his return season to Serie A following his Russian experience in Moscow. There was no place in the side however for veteran goalscorer Giampaolo Pazzini who instead had to settle for his own spot on the bench. 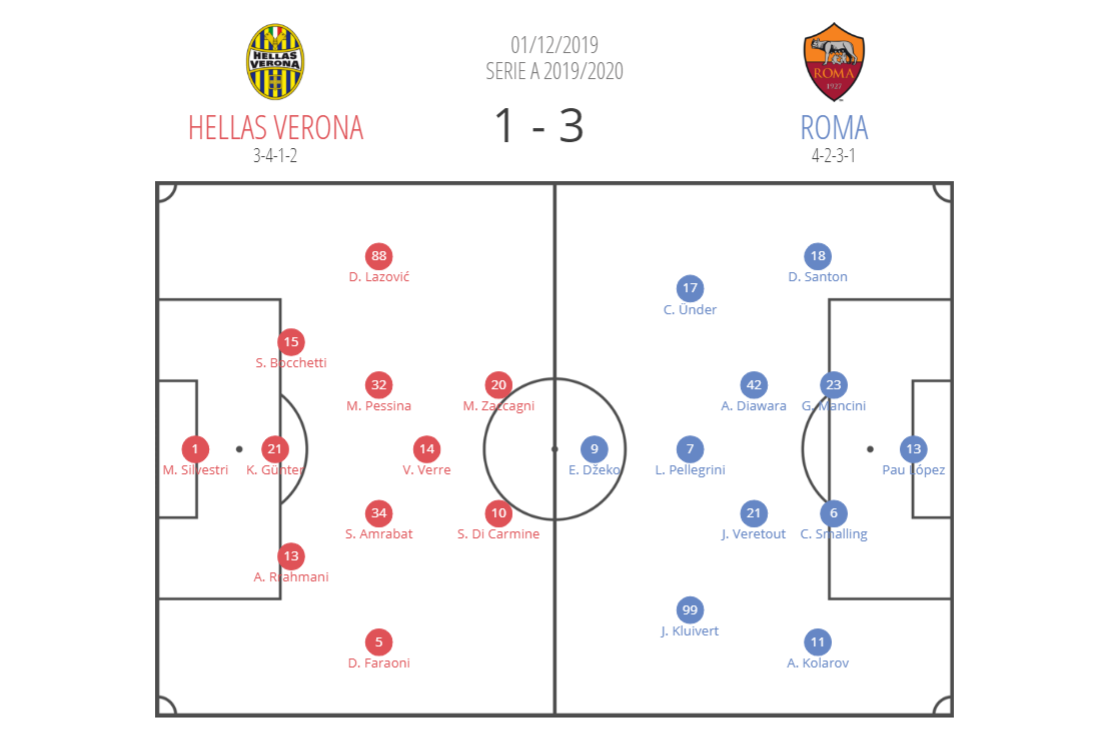 It became quickly apparent in this game that Verona would struggle to impose themselves on this game. This was primarily due to the lack of occupation they had in the centre and seeming lack of options their players had to pass to when on the ball. This was particularly a problem when Verona were building out from the back. For their centre-backs, there were almost no safe options to pass the ball forward as great chasms of space appeared out of nowhere between the defence and the forward line.

The two deepest midfielders for Verona often remained too deep or too wide whilst in possession leaving only the forward three players as threats within Roma’s defensive shape. Not only did this not create any overloads within the spaces inside Roma’s defensive shape but this also meant that Verona were playing with six men or more outside and in front of Roma. This made it very easy for Roma to defend against Verona’s possession since so much of it occurred in front of the entire Roma defence.

Roma’s defence could simply sit back and keep Verona’s attack at arm’s length in this game because of this. Having to only account for three attackers within their shape and two wingbacks on the outside meant that by just focusing on keeping a compact shape (as opposed to pressing the ball high up the pitch), Roma could condemn Verona to an abundance of meaningless possession and circulation among their deepest players.

Verona’s defensive tactics in this game included adopting an extremely expansive man-marking scheme. Almost every outfield player for Verona found themselves responsible for marking an opposition individual in this game. The only players Verona would leave unmarked at a time were the opposition goalkeeper and far-side fullback.

This made them easy to manipulate however as the shape of their defensive block was determined entirely by the movements of Roma’s midfield and forward lines. This is often a risky adventure for a defence to embark on as it becomes very easy for the block to become disconnected when their primary reference point is an opposition midfield as opposed to their teammates. When a defending player is no longer taking into account just how far away he is from his next nearest partner then you can begin to understand already how likely it is for a defensive shape to become disjointed and open.

The extremity to which Verona relied on their man-marking thus exposed their defence to many dangerous situations. Due to the reactive nature of their defensive orientations, large spaces were often opened up in the centre of the pitch behind their midfield and one v ones down the flanks were also commonplace. If Roma had had more quality on the day and in their squad, then I’d argue that Verona could’ve been put to the sword in a more gruesome fashion than they were.

In the buildup to Justin Kluivert’s goal, Roma used some pretty standard midfield rotation to open up the Verona defence. Referring to the image above, the numbers illustrate the order of events that occurred that led to Roma opening the scoring in this game. 1. Veretout threatens with a forward run to drag his marker with him. 2. Pellegrini drops into the space that’s been created because of this, so he can receive the ball. 3. Kluivert uses his pace to beat his marker down the flank in order to latch onto the ball played in behind the defence.

To man-mark almost an entire eleven in the manner Verona were attempting to do, every player on your team has to do their job to an elite level because if one player isn’t able to mark his man out of the move, then this could be catastrophic for the rest of the team. The chain reaction of events that can occur if just one player lets his man run off him can be disastrous as it will result in many other teammates having to pick up the extra slack in order to deal with the threat.

A team is only as strong as it’s weakest link.

Despite the discrepancy in possession as well as the fact that Verona had a goal disallowed for offside, Roma were rarely threatened in this match and ultimately they deserved their win. Without their star man Zaniolo, on a night where it might’ve been easy for this Roman side to slip up, Fonseca’s men stood tall above their promoted rivals and finished them with an efficiency that belies the youthful nature of this team.

Verona’s approach to this game was bold and aggressive but ultimately misplaced as it’s execution relied on a military-like discipline and fierce application that was lacking in this side. It was because of this that Roma enjoyed a relatively comfortable evening on an occasion where they could exploit such weaknesses. It will also be because of this however that Verona should do enough between now and the end of the season to avoid relegation as the more games they attack with this fearless attitude, the more games they’ll intimidate and upset their more established competition. They’ll just need a much better gameplan than the one they had on this occasion.