Amidst confessions that Juventus could not utilise their three star forwards in the same team, Lazio stunned the defending champions, defeating them to the tune of 3-1 during the latest round of Serie A fixtures. After already relinquishing their top spot to Inter last week, Maurizio Sarri’s men stumbled to another disappointing result, this time on an away trip to Rome.

This tactical analysis will detail the tactics on display during this exciting clash between two Italian staples. Our analysis will highlight and explain precisely how the game was won for Lazio and how their tactics dismantled this star-studded Juventus side.

As alluded to earlier, Sarri has become frustrated trying to crowbar his three star forwards into the same lineup. During their last outing in a 2-2 draw with Sassuolo, it was Paulo Dybala who was dropped to the bench with Gonzalo Higuain starting ahead of his international compatriot. In this game, however, the two swapped roles and it was Dybala instead of Higuain who was given the nod to start in attack alongside Cristiano Ronaldo.

Sarri continued with the 4-3-1-2 formation that he has persisted with since his move to Juventus in the summer. The only other changes Sarri made to his lineup from the side that drew against Sassuolo was replacing Gianluigi Buffon in goal for Wojciech Szczęsny as well as bringing in Blaise Matuidi for Emre Can in midfield.

Lazio were unchanged from their most recent victory against Udinese as they lined up in their 3-5-2 formation. Lazio would be relying on Ciro Immobile to add to his already impressive 17 goals in 14 Serie A appearances but would also be hoping for some production from the likes of Sergej Milinković-Savić and Luis Alberto in midfield in midfield were they to get anything from this game. 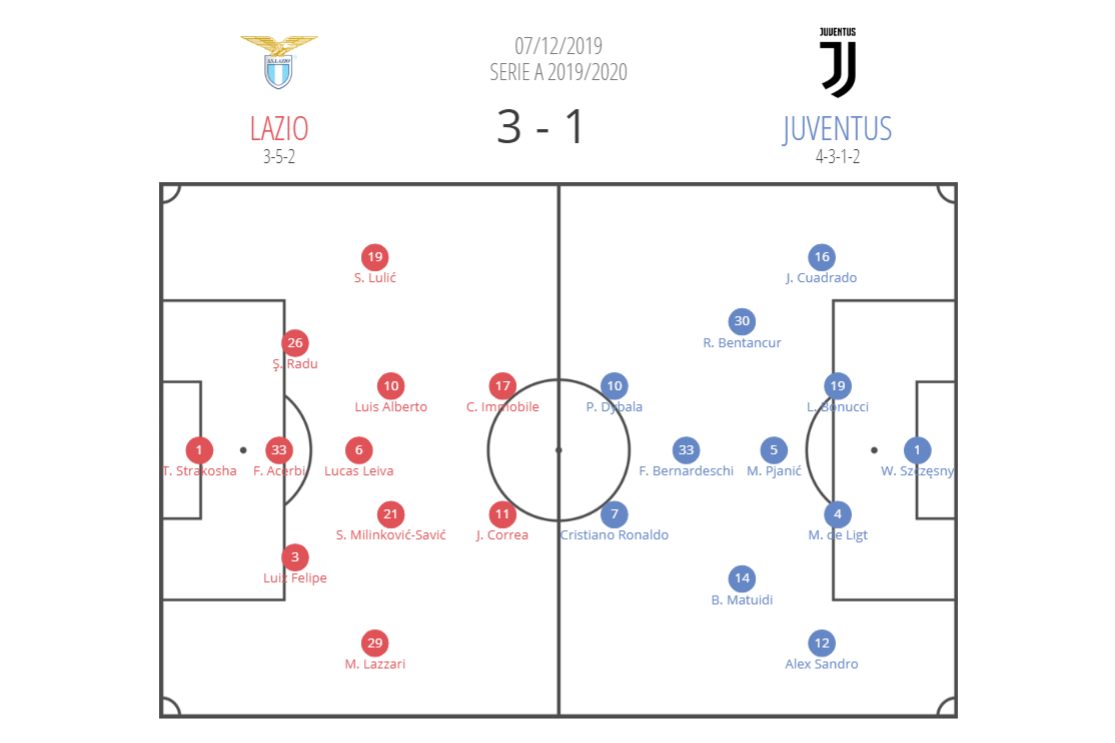 There was little in the first half to suggest that this kind of upset was on the cards as Juve enjoyed the best of the action for most of the opening exchanges. Perhaps the most interesting aspect of Juve’s tactics was the change in positioning for Alex Sandro and Juan Cuadrado.

Instead of bombing forward on a regular basis when their team had possession of the ball like we usually see them do, both players instead remained deeper down the flanks. This proved to be an inspired tactic for Sarri’s men against Lazio’s wing-back formation.

With Cuadrado and Sandro receiving the ball in these deeper areas, it regularly asked the question to Lazio as to “who presses the ball?” Would a central midfielder come out to press and stretch the midfield? Or would the wing-back push forward and risk stretching the backline? No matter what the answer was, Juventus would commit forward runners from midfield as well as their own forward line to attack the space left behind by whoever moved to press the ball.

Emre Can (who’d come on for the injured Rodrigo Bentacur) registers that Senad Lulić has moved forward to press Cuadrado, and so attacks the space the Bosnian leaves behind him.

Further ahead, because of Can’s forward run, he must be met by another member of the Lazio defence which compels the remaining three to shift over but also leaves them exposed to the rest of Juve’s attack. Ronaldo and Fernando Bernadeschi now both have opportunities to attack space between the Lazio backline and are left in 1v1 situations if they they can receive a ball in these spaces they’re attacking.

Lazio did attempt to nullify this particular tactic from Juventus by pressing heavily in the wide areas once the ball had passed the halfway line.

This press was much more effective when led by one of the central midfielders who’d come across to press the full-back as this allowed for extra cover to be offered behind the presser by both the wing-back and near-side centre-back.

This would usually be enough to deter Juventus from attacking that particular side in that move but it did little to disrupt Juve’s rhythm as they would simply circulate the ball over to the other side. Due to the disciplined role of the two full-backs on the day, as well as the narrow nature of Lazio’s formation, Juventus could easily circulate the ball in this fashion and continue to probe Lazio’s defence on a consistent basis.

After Cuadrado’s sending off, Juve’s pressing intensity fell off a cliff as they removed Bernadeschi from the forward line in order to allow Danilo to fill out the back four. Sarri simply took the central attacking midfielder out of his formation in order to play a 4-3-0-2 to help his side defend with only 10 men.

Juve’s emphasis changed from imposing themselves on their opposition by pressing the ball to focusing on maintaining some resemblance fo shape. This was an understandable change but unfortunately it cost Juventus any potential point from the game. This was after they allowed Luis Alberto too much time and space to play the ball into the penalty area for the Serbian behemoth, Sergej Milinković-Savić, who would score the goal to put Lazio 2-1 up.

Conceding this goal at this stage of the game only compounded Juve’s desperate situation as now they had to be the ones to take more risks in search of an equaliser. This meant Juventus had to push forward their defensive line when the rest of the team attacked but Juve couldn’t play or defend in the way they wanted to.

With less men to attack the backline of Lazio, Sandro and Danilo now had to advance forward to provide the width for their team but with less numbers to counter-press the ball after losing possession and with the defensive line having to push forward to keep the whole side connected in possession, it opened up a world of hurt for Sarri’s men.

In the closing stages of the game, Lazio put Juventus to the sword using Ciro Immobile, Joaquin Correa and Milinković-Savić to attack the spaces behind Juve’s defence and relieve the pressure on their own defensive shape.

Attacking Juventus at pace like this in the dying moments of the game resulted in Lazio winning a penalty (which Immobile failed to convert) but also the finish from Felipe Caicedo to turn the scoreline 3-1 in Lazio’s favour. These direct counter-attacks not only created plenty of chances to finish off the game for Lazio but it also helped to prevent Juventus from gaining any sort of momentum they could use to turn the game back on its head. It just shows the importance of continuing to attack an opponent at every opportunity throughout the game as opposed to just sitting back and protecting what you’ve got.

I’m not sure we’d be talking about a shock result in this game had Cuadrado not been sent off as Juventus looked fairly comfortable throughout the game until this point. The only time they’d been beaten was during a set-piece in the dying seconds of the first half which had initially allowed Lazio to equalise.

Sarri should be credited for employing a clever tactic that threatened to dismantle Lazio’s narrow formation and which only really fell apart after the red card. Lazio should also be credited however as they remained in the game throughout and after Cuadrado’s sending off, they were ruthless and had Immobile converted his spot-kick, it could’ve been an even more magnificent result for Lazio and Inter fans alike.