Cagliari got defeated 0-4 by Juventus in their Serie A meeting which underlined the drop in their form. Juventus’ improved midfield actions and well-executed counter-press didn’t give their opponents any free space and allowed them only one shot on target for the whole 90 minutes.

The better connection and movement in Juventus’ central areas was noticeable and the players deserve to be praised. The hat-trick hero Ronaldo was active as per usual and naturally finished the great work done by his teammates behind.

This tactical analysis aims to explain how the Bianconeri troubled Cagliari’s build-up and how their attacking strategy managed to break their opponents’ defensive structure and reach the impressive 4-0 win. 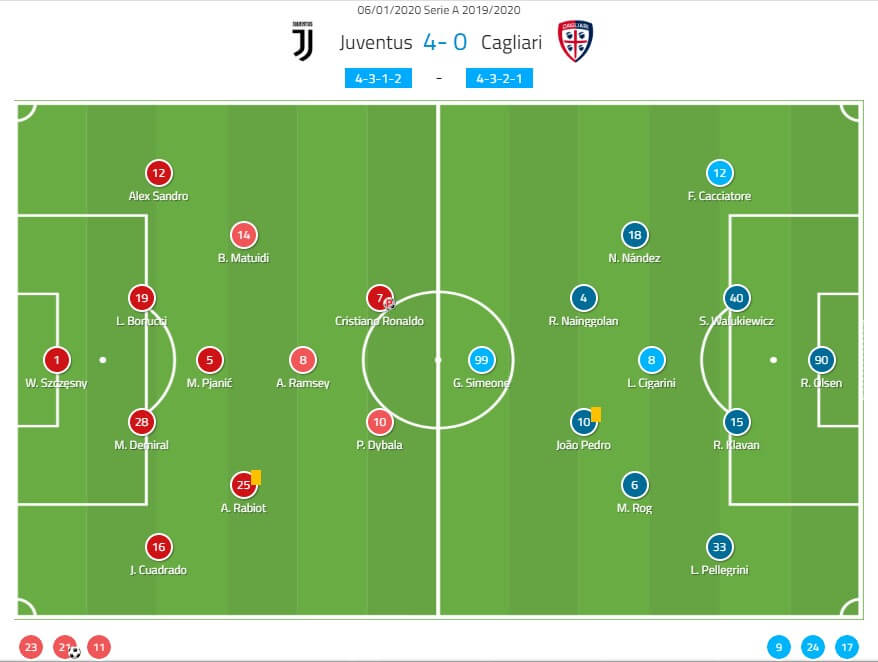 Maurizio Sarri opted for 4-3-1-2 formation with the highly positioned defensive line and active use of the full-backs as per usual. This time though their role was quite different, which will be explained later in the analysis. Wojciech Szczęsny was the started on the goalkeeping spot with a four-man defensive line of Alex Sandro, Leonardo Bonucci, Merih Bemiral and Juan Cuadrado in front of him. The improved midfield line consisted of Blaise Matuidi, Miralem Pjanić and Adrien Rabiot, who contributed well despite the lack of many playing minutes this term. Positioned in the attacking midfield and responsible for providing creative solutions was Aaron Ramsey. As usual, this season, the front duo included Cristiano Ronaldo and Paulo Dybala.

Rolando Maran set Cagliari up in a 4-3-2-1 scheme. Robin Olsen was the unfortunate man on the goal, supported by Luca Pellegrini, Ragnar Klavan, Sebastian Walukiewicz and Fabrizio Cacciatore. The 19-year-old Walukiewicz made his first start for the team and was the only solid performer of Cagliari’s backline. Their midfield consisted of Marco Rog, Luca Cigarini and Nahitan Nández. As per usual, the attack was formed by João Pedro, Radja Nainggolan and Giovanni Simeone.

As already mentioned Juventus’ midfield efforts was what won this game. Ronaldo’s huge impact should not be underestimated, of course, but what made the difference from their previous games is their midfield positional awareness and counter-press actions.

They focused all their efforts into troubling Cagliari’s build-up and gaining back possession as soon as possible. It was started with applying high press and forcing the opposing defence into sending back passes and committing individual errors. Their midfield players would be positioned in a way to block the passing lanes but also counter-press intensely. The limited space between the lines, hence the highly positioned defensive line and the full-backs’ midway positioning wouldn’t allow their opponents to move around and use their creativity. Their compact shape stuck Cagliari midway and allowed them to create only 15 positional attacks throughout the game. For the record, Juventus were able to create 42.

The players aimed to win the ball back while it’s still in the opposition’s half and would recover the ball frequently using their effective positioning. Due to their smart shape and movement, Cagliari’s defenders were constantly under pressure which affected their passing accuracy. They were frequently pinned back deep in their own half which required even more efforts to advance the ball. The Cagliari team failed to close out the space between the lines and they were lacking passing options in the build-up phase.

The Bianconeri’s better aerial performance also had an impact on the outcome. In the moments they would win the ball back they used smart movement and short pass combinations to quickly distribute the ball further. Not only the number of passes created (750) was impressive, but also the precision in their execution (90% pass accuracy). This is also proof of Cagliari’s lack of counter-press and effective marking strategy.

The Black and Whites would build-up from the back as per usual. They would use the central defenders to spread the ball out most frequently using the full-back in the game Cuadrado. He was one of the most active players and had two roles in their attacking strategy. He was used to go deeper in the opposition’s half and use the crossing to the box in order to create goal-scoring opportunities. But he would also serve as an additional passing option, often combining with Pjanić, and rotating with Rabiot on the wing in efforts to drag players out of position and create space for the attacking players.

Cagliari allowed being stretched out and fell victim of their opposing attackers’ movement and creativity. As mentioned, they were often pinned back closer to the goal area. What Juve’s players would do in these situations is instead of pushing further when receiving crosses, they would step back and free themselves and directly shoot without having to deal with the overloaded defensive line.

Juventus aimed to overload the opposition half. There were always two players in between the four defenders, pinning them back, then any of Juve’s other attacking players would move off the ball and combine trying to penetrate the defence. This constant movement was hard to handle and tired Cagliari’s players in the second half when they conceded all four goals. The uncertainty in their structure when defending allowed Juventus to be creative. The away team’s defensive midfield tried dropping additional men to the defence as well as supporting them from upfront, but switching between these two strategies made it difficult to be consistent. Sarri switched to 4-3-3 with Higuaín coming on the pitch, which made it even more difficult for the defence to block Juve’s efforts.

Pjanić and Ramsey performed well enough individually, but what made the difference in the team’s build-up was their partnership. They were amongst the most frequent passing links. Ramsey would drop deeper to pick up the ball from the Bosnian and deliver it further.

The Bosnian ended up with 97% passing accuracy, being responsible for 29/30 accurate passes to the final third, whilst Ramsey contributed with 95% accurate passes. He would not only contribute centrally and switch position with Pjanić, but also provide passing options on the flank.

Cagliari are lacking the good finishing lately, and it cost them a lot in this game too. They didn’t have the chance to reach the goal too many times, but in the six times they did, they only managed to shoot on target once. Most of their chances (four) came on a counter, but they were unable to take advantage of the rare occasions Juventus’ defence was caught off guard.

Their build-up was troubled and they relied on long passes, but their passing accuracy wasn’t high enough, due to Juventus’ counter-press. Due to their low block, the whole team had to move deeper, which affected their attacking actions. The forward players had to drop down to the central line and had a hard time advancing the ball further.

In the rare occasions they managed to stay in the opposition half they tried to penetrate by switching play, but most of the times unsuccessfully.

Juventus need to transfer this midfield performance in their next fixtures if they want to take advantage over Inter in the Serie A title race, as you can see in the analysis above. That’s been their only struggle thus far, but the way they managed to block Cagliari’s efforts was impressive.

Cagliari on the other side need to be more aggressive in their defensive tactics and apply more pressure to their opponents. Overcommitting players to the ball carrier is risky, especially when there’s a structural uncertainty as it happened in this game. They also need to find a way to increase their attacking creativity and improve their finishing, since that was the deal-breaker in their last games.