How Werder decided the game in seven minutes against Schalke

In the quarter-finals of the DFB Pokal, Schalke faced Werder Bremen with a new coach. The game unfolded into a much tougher battle, considering how bad this season has been for Schalke, although the 2-0 result does not suggest it. Despite what probably everyone anticipated, Schalke managed to hold Werder at 0-0 until Florian Kohfeldt’s men quickly scored two goals in the middle of the second half.

This tactical analysis will look into how Schalke made the game harder for Werder Bremen. But more importantly, it will focus on Schalke’s game plan to reduce Bremen’s attacking threat and how the guests tried to overcome the hurdle. Also, we will examine what tools Schalke used during their attacking phase. 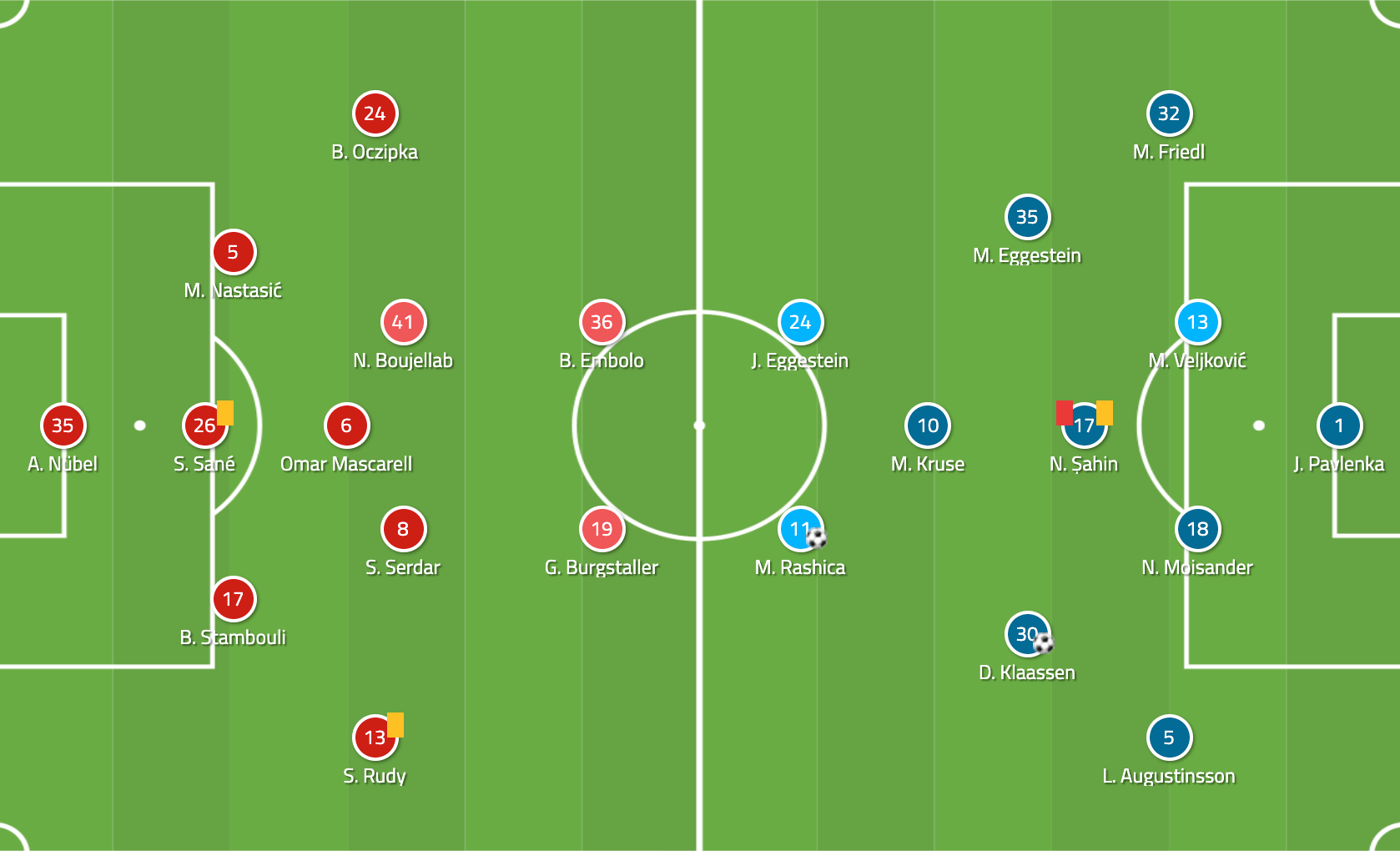 With Huub Stevens on board having recently replaced Domenico Tedesco, Schalke switched to a 3-1-4-2 formation after the 7-0 demolition by Pep Guardiola’s Manchester City. In the team selection, Stevens made some changes from to the last two matches, starting with the three blocks at the back. Benjamin Stambouli joined Matija Nastasić and Salif Sané, instead of Jeffrey Bruma.

Therefore, Omar Mascarell took Stambouli’s position as defensive midfielder. Stevens also changed the central midfielder pair of Sebastian Rudy and Suat Serdar. Rudy moved to the right flank as a wing-back and Serdar paired up with Nassim Boujellab. And up front, instead of Mark Uth, Guido Burgstaller played alongside Breel Embolo.

Whilst Kohfeldt deployed the usual 4-diamond-2 in which the base of the diamond is a lone pivot, namely Philipp Bargfrede, this time Kohfeldt employed Nuri Şahin in this role. On either side featured two number eights, Maximilian Eggestein and Davy Klaassen. One attacking midfielder was in front of them as Max Kruse adopted the playmaker role, while the two strikers were Milot Rashica and Johannes Eggestein. Although the defence was almost the same as usual, Marco Friedl was employed at right full-back instead of Theodor Gebre Selassie.

Dangerous Schalke at the beginning

The home side started the game better with a considerable portion of the ball in the opening minutes. As the match went on though, Werder Bremen quickly gained control of the game. However, the first few minutes was enough for Schalke to produce two dangerous attacks. The first ended up with a questionable situation which could easily have been punished with a penalty.

One of the key aspects of their attacking phase were the long balls to depth, in behind the last line of defence or targeting Embolo who dropped to challenge Şahin for the ball. Since it was an uneven face off due to Embolo’s height advantage, he easily won the ball. This led to the first chance for Schalke after they lost the ball and then won it back to initiate a counter-attack.

Counter-attacks were also a crucial part of their threat. They had some promising situations from counters throughout the whole match, but these often ended up with shots from outside of the penalty box. None of their shots were really good, therefore they were probably the closest to scoring in the opening minutes, when Jiří Pavlenka questionably tackled Embolo.

Attempt to slow down and stop Werder’s build

In order to match Bremen’s 2-1 (two central defenders and the deepest midfielder) in build-up situations, Boujellab moved up in behind Burgstaller and Embolo to form the first line of press and mark Şahin, whilst Serdar and Mascarell formed the central midfield. Thus Schalke’s formation was more of a 3-4-1-2 shape in this match.

Moreover, Schalke took the choice to not press actively but rather protect the central area until back-passes triggered their pressing movement. Their goal was to force Bremen into playing long balls or isolating them on the wings. In these situations, Embolo pressed Niklas Moisander while Burgstaller paid attention to Miloš Veljković. The central midfielders covered their opposite numbers and the wing-backs, Bastian Oczipka and Sebastian Rudy, pressed the opposite full-backs respectively.

Bremen found several ways to overcome the home side’s press, such as horizontal passes to the full-backs, mostly Ludwig Augustinsson. Due to the deeper positioning of Schalke’s midfield line, Augustinsson had time to get control of the ball and find an option before Rudy arrived to press.

Another way to exploit and beat Schalke’s press was to use an additional man in deep areas to create numerically superior situations. Since Schalke did not follow their opposing players too deep, Klaassen was able to drop freely to create a spare man and add an outlet from Schalke’s press.

Furthermore, in possession, Bremen’s two eights acted mostly in the half-spaces, but the strikers also moved outwards. This allowed Eggestein to give a passing option in the right half-space.

Although Bremen found ways to progress they still struggled to create scoring chances. Schalke were fast in transitioning into defence and readjusting their position, therefore the visitors had a difficult task. They also had some promising counter-attacks which could have ended up giving them the lead but the first half ended goalless.

After the break, the game continued in the same manner, although there were some little improvements in Bremen’s play. They found teammates in their opponents’ second line with vertical passes more frequently due to Schalke not marking as tightly as needed. Also, they were able to pin back Schalke’s second line, so when the full-back received a pass he found space ahead.

Around the first goal, Bremen managed to keep the ball in Schalke’s half and put some pressure on their defence. After losing the ball they were good at counter-pressing which resulted in quickly winning the ball back. They did this until they found a way to Schalke’s goal to score.

The quick goals decided the battle, and although there was time left for Schalke to stage a comeback it was not likely to actually happen. Schalke are still far from top form but Huub Stevens might find the right path in spite of this loss. They put in a decent performance against Werder Bremen.

Werder Bremen have a strong chance to at least advance to the DFB Pokal final. However, there is still a big battle in the Bundesliga, not just for the title between Bayern Munich and Borussia Dortmund, but for sixth place. Bremen hold that position, but Leverkusen and Wolfsburg have the same number of points and with Hoffenheim only one point further back. These next few weeks will be difficult and important for Kohfeldt’s side.