There is a reason Quique Setien has been linked lately to Barcelona FC. With a less “bombastic” squad, he has extracted a lot of performance from his players, deploying a well-executed positional game in Real Betis. The output of several players, as Lo Celso, Canales and Francis Guerrero among others, has increased lately under the umbrella of Setien.

They faced Real Sociedad for the first leg of the eight of finals of Copa del Rey, two teams that want to keep possession, that love having the ball under their control. The result came from a well-played game, with a more exciting second half that ended with a goalless draw that leaves the leg open for the second leg in San Sebastian.

The beginning of the game saw two teams looking to control the game through possession and short passing. But it was only for 10 minutes that the battle was relatively even, and after that encouraging start by Real Sociedad, it was the home team who took control of the game. Since Quique Setien took the post as coach of Real Betis, the team has turned into a very collective-oriented team, avoiding long balls and looking to keep possession at all costs and in every part of the pitch.

As the team advances with the ball, they look to create numerical and qualitative superiority in both wings, especially accelerating the game through changes in the pace both players and passing the ball at higher speed, precluding the rival to organize the defence on the side where the ball is headed. This was well done in the first half by Betis until the final third of the pitch, where Real Sociedad placed two lines of four players each that made it difficult for Betis to progress from that point. They lacked deepness in their attack to create spaces to get closer to Real Sociedad goal area. 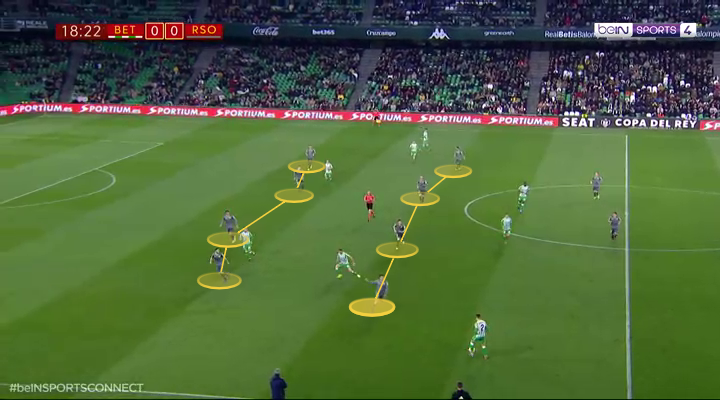 As a result of this, Betis had to double the effort to create chances. They placed as much as four players at the front of the attack, trying to lengthen their rival and create spaces in between the two defensive lines. Also, they did a good job of constantly swapping positions in the front line between players, trying to avoid Real Sociedad defenders of having clear references of the man-to-man marking and disrupting the defensive order of their rival. 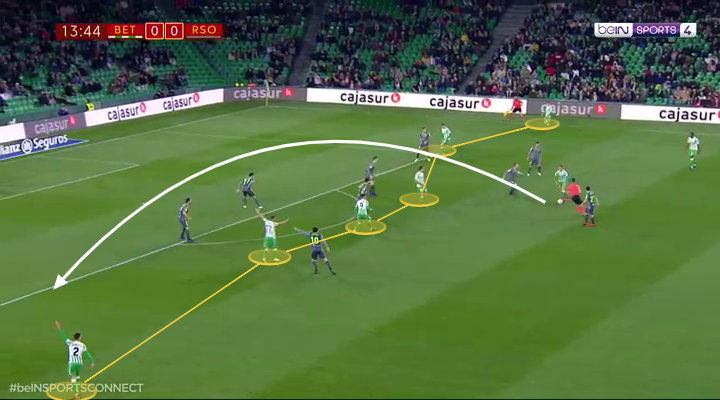 Instrumental to this tactical behaviour was the work of Sergio Canales, the former Real Madrid player excelled with his movements off the ball, opening spaces for the rest of his teammates as well as pulling defenders of Real Sociedad wider. This opened spaces for Lo Celso, Guardado and Joaquin in the middle. 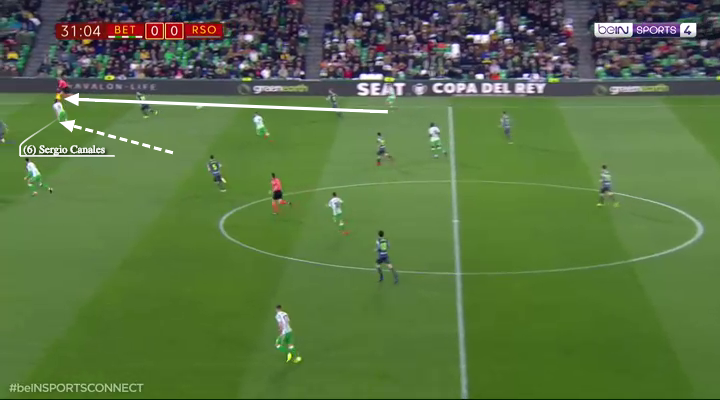 It was these movements opening the defence and then accelerating the pace of the game while moving the ball from one wing to the other fast enough, the way they found to open spaces and resulted in the clearer chances for Real Betis. It is also worth mentioning that the offensive production didn’t match the usual quality and depth that the Setien team has us used to. 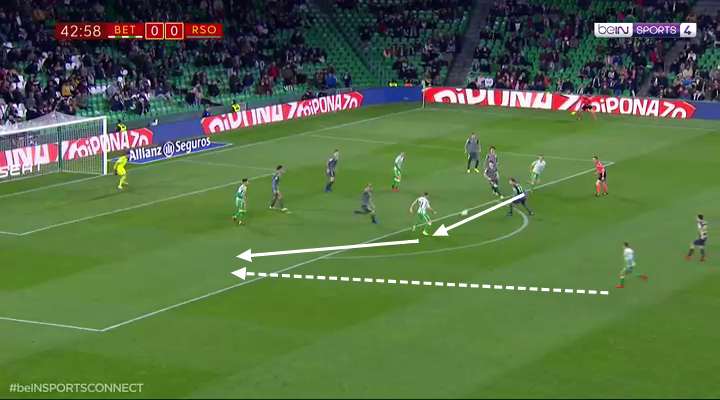 Meanwhile, Real Sociedad’s performance was very weak. Although they had a clear chance at the beginning of the game with a nice collective play between Sangalli and Bautista, the rest of the first half they were unable to create danger in Betis half. They tried to circulate the ball and progress with possession, but the potential receivers of the ball were always very static, resulting in an easy victim for Betis pressure that let them anticipate Real Sociedad players without much effort.

On average, Real Sociedad manage 443 passes per game, while against Betis they only did 303, showing how the lack of movement resulted in easy marking for home defenders. Although Betis did press very high, Real Sociedad managed to start the build-up from their goal area, but as soon as they got closer to the half line, they lacked ideas to keep progressing. The only two chances they had afterwards were free-kicks that ended with easy headers directly into Robles’ hands. 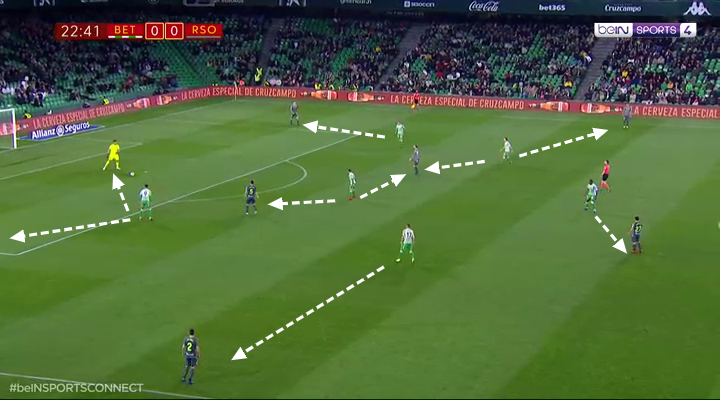 Fun came in the second half

The second half started much more open, with both teams positioning themselves higher (especially Real Sociedad), resulting in a much more dynamic game, with higher pace and more vertical movements, and more clear chances for both teams, in the feet of Lo Celso for Betis and Oyarzabal for Real Sociedad. 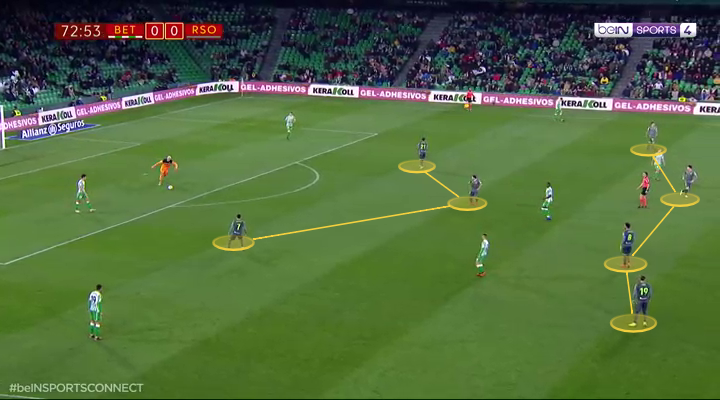 Coinciding with Tello replacing Guardado in Betis, the best moments for Real Sociedad arrived. Quique Setien replaced the Mexican midfielder, moved Canales to the middle of the pitch closer to Carvalho, and located Tello open wide on the right wing. The objective was to change the attacking scheme, from vertical passes to players running to the back of the defenders, into controlled attacks and 1v1 duels with Tello and Lo Celso as main performers. 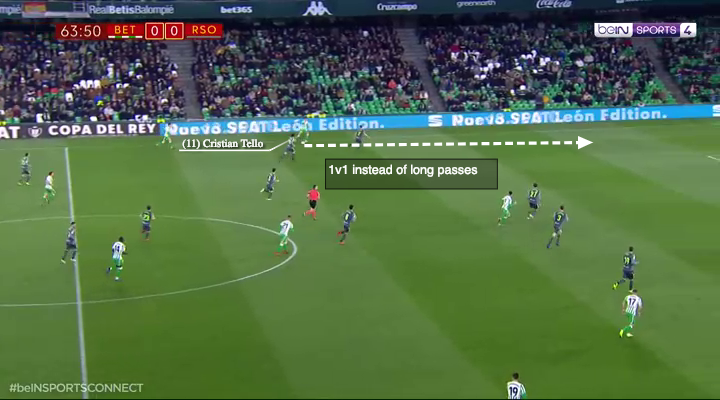 Even though it seemed like an interesting idea, it ended diminishing the two main attacking figures that Betis had until that moment in the game: Canales and Barragan, the right-back that was a constant danger for Real Sociedad defence, playing wider and also positioning himself closer to Sanabria, leaving the wing to Lo Celso. Not a usual starter under Setien, Barragan did participate more in the offensive circuit of Betis while Lo Celso keeps consolidating as a relevant offensive weapon for Betis. In this game, he had 16 offensive duels versus an average of 11.7 during the last year, but more importantly, he won 75% of those, compared to an average of 55%. He has an active participant and he inflicted a lot of damage also.

With Canales trying to participate in the build-up and offensive phase of Betis, there was plenty of space in the middle to counter-attack, space that was exploited by Sangalli, Oyarzabal and Bautista with fast transitions that created clear situations for the visitors to score the opening goal. Carvalho was covering huge distances in the middle of the pitch, with little help from the rest of his teammates that were not transitioning correctly to their defensive positions. 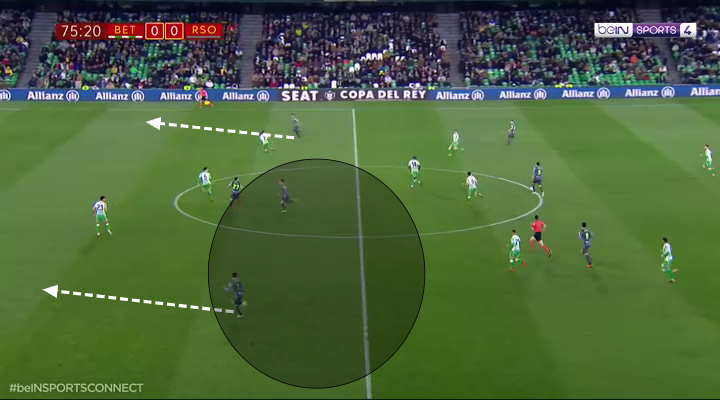 In the end, Real Sociedad were closer to scoring during the second half but the result is a fair draw, with one half in favour of each team, and a leg that will have an emotional second game at Real Sociedad stadium. This is a duel between two teams that try to play similarly, but so far, Setien’s side have been more successful, as seen in the La Liga table. We will see if this translates into the Copa del Rey clash next week.

If you love tactical analysis, then you’ll love the digital magazines from totalfootballanalysis.com – a guaranteed 100+ pages of pure tactical analysis covering topics from the Premier League, Serie A, La Liga, Bundesliga and many, many more. Get your copy of the FIRST of two December issues for just ₤4.99 here, or the SECOND of the December issues with an annual membership right here. Alternatively, you can pre-order the January issue NOW! It lands on Friday 18 January.