Why Icardi-less Inter struggled in Wien

Internazionale visited Rapid Wien in the Europa League but this time the biggest excitement was not the clash itself. Instead it was before the game, due to the escalated case of Mauro Icardi who had been removed from the squad list and even seen the captaincy switched to Samir Handanovic. The matched ended with a narrow victory for Inter due to their struggles.

This tactical analysis will be focusing on Rapid’s defensive structure since the main takeaway from the game, which had a huge influence, was how they focused on defence and reduced Inter’s attacking threat. Thanks to this they managed to keep their chances alive.

Dietmar Kühbauer’s men came into this battle from difficult circumstances due to the fact that their domestic competition had been on a winter break since the middle of December. Therefore it was a challenge to get his team on top form. On the other side, Inter prepared with a Serie A victory against Parma. However, two recent defeats in the previous two games revealed some issues. 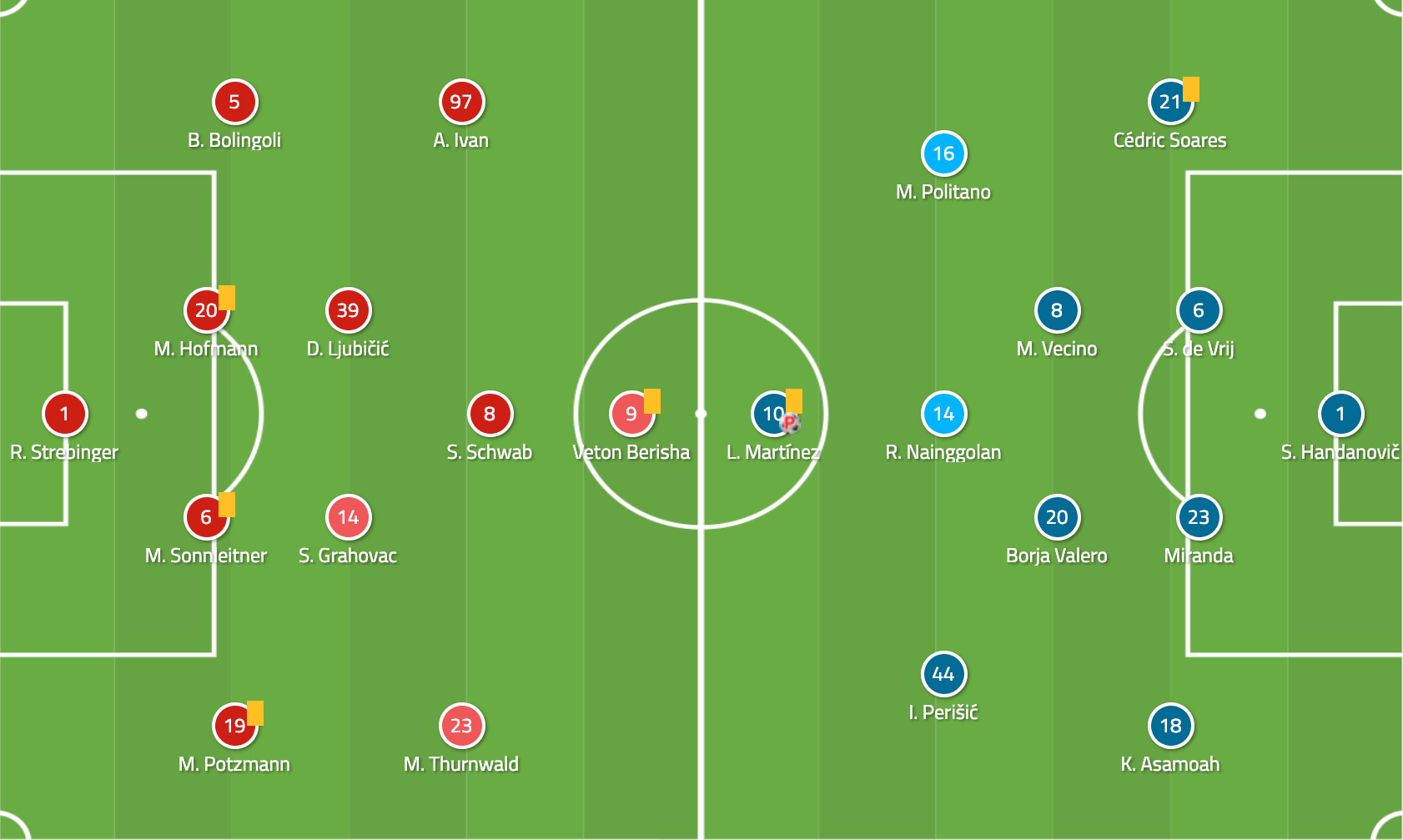 The home side deployed a 4-4-1-1 formation which transformed into a 4-2-3-1 in the offensive phase as Thurmwald and Ivan transitioned into attack.

Moreover, Luciano Spalletti replaced Icardi with Lautaro Martinez and instead of the suspended Marcelo Brozovic, Borja Valero featured alongside Vecino. In front of this double pivot was Radja Nainggolan.

It is easy to understand the basic idea of the home side’s approach to this clash. In order to minimise Inter’s attacking threat, Rapid took a fairly conservative style as they did not press high. Instead, they formed a medium block with a fairly narrow shape. They set up a ball-oriented manner with some man-to-man coverage. In order to reduce the space on the ball side, they always shifted from side to side.

As mentioned earlier, the formation was 4-4-1-1 but fluctuated between this and a 4-1-4-1 due to Grahovac or Ljubicic’s positioning. They took their cue from Nainggolan’s position, thus dropped deeper to cover him as the image shows below.

One of the most important roles in this defence was Venton Berisha’s. His defensive contribution was crucial, with his task able to be divided into two major parts. The first was when the ball was in the centre and his duty was to cover the passing lanes. Secondly, when the ball moved wide he often shifted to there, in order to put pressure on the ball carrier.

Since Rapid were concentrated in the central zone and often against a 4-4-1-1/4-4-2 or 4-1-4-1 defences, their opponents would find space in the lateral zones. This was mostly in the half-spaces, or on either side of the strikers. This is another reason why it was so important that Berisha or Schwab shifted to the wings.

We could not see much from Rapid Wien in attack due to their emphasis on defence. Thus the major weapon was the counter-attack which was not so successful. Some were stopped by Inter but those occasions when they managed to attack, they often sought to deliver the ball to the wings.

Inter dominated the game from the beginning with long possession phases. In the first 15 minutes they had almost complete possession of the ball. However, it was not borne to fruition as they wanted or anticipated. They were not able to create scoring chances. Therefore, it is a logical step to look into their attacking set-up.

Since Inter struggled to find a way to the forward players, they passed the ball from side to side. The circulation became formulaic. They failed to find the breakthrough against this defensive organisation.

Moreover, the full-backs did not push forwards but stayed deeper to receive the ball. As the image below highlights, the positioning Valero and Vecino occupied was deeper. They sat in front of the opposition second line in order to help the progression, while the rest of the team were isolated further up the pitch. 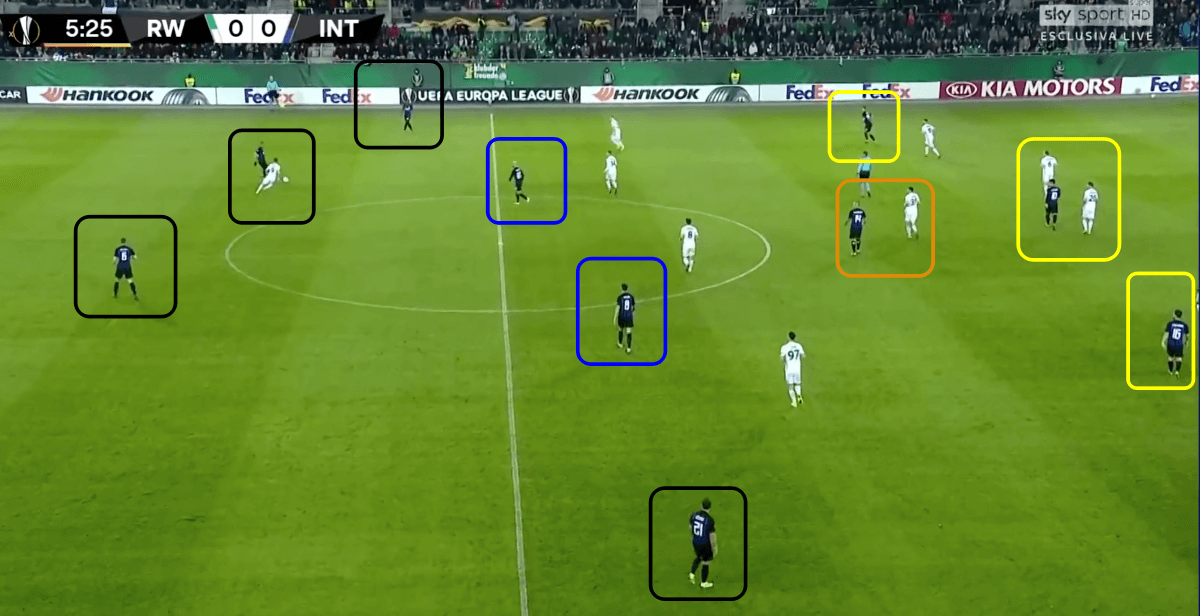 As I mentioned earlier, they had to find space on the flanks, thus Inter become wing-oriented in attack. Even Valero and Vecino often dropped into the half-space to help. Despite the evident big spaces, Valero did not have quality options.

The schematic circulation led to turn backs and re-circulation through the centre-backs. Consequently the forward players rarely saw the ball. In addition, the visitors could not create space in the oppositional defensive shape. They failed to stretch the lines to create passing lanes. Thus Rapid’s defensive structure could remain in their comfort zone.

Inter had one tool left to find the breakthrough; they tried to use direct balls after switching play, but these attempts were intercepted easily by the full-backs. 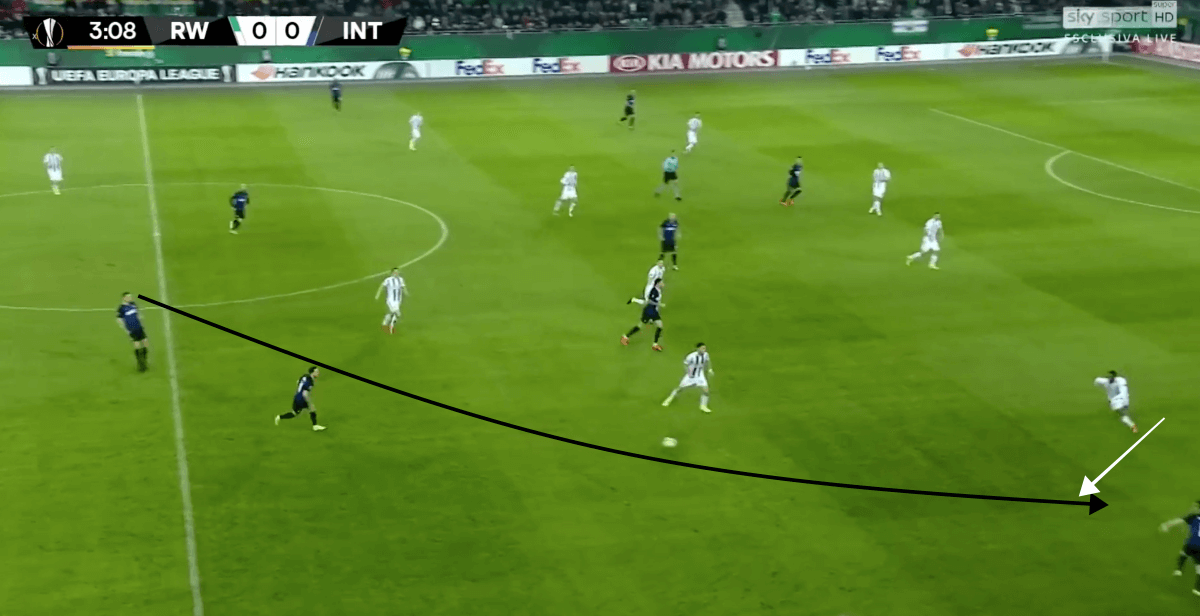 That was if they were actually able to create space. This time Inter were able to break the opponent’s second line but they could not take advantage of the proper use of cover shadow. Also, this image highlights a pattern of Inter’s positional play. They often used positional switches where the winger would move inwards, dragging the opposition full-back with him. As a result, Nainggolan or Martinez could exploit the vacated space.

The game ended with a lone goal from a penalty by Martinez. Inter showed little in attack, especially when it came to creating space. Despite their slender advantage, the second-leg will still matter.

From Rapid Wien’s perspective, they did a pretty good job considering that they are only eighth in the Austrian Bundesliga. However, for the second leg, they have to show more, mostly in the attack.