Sorting through the data from whoscored.com for an article on Premier League Moneyball, there was a curious team hanging out with unexpected company. West Ham popped up in data of the most efficient shot conversion teams. The percentage of shots that were goals put them in esteemed company last season. 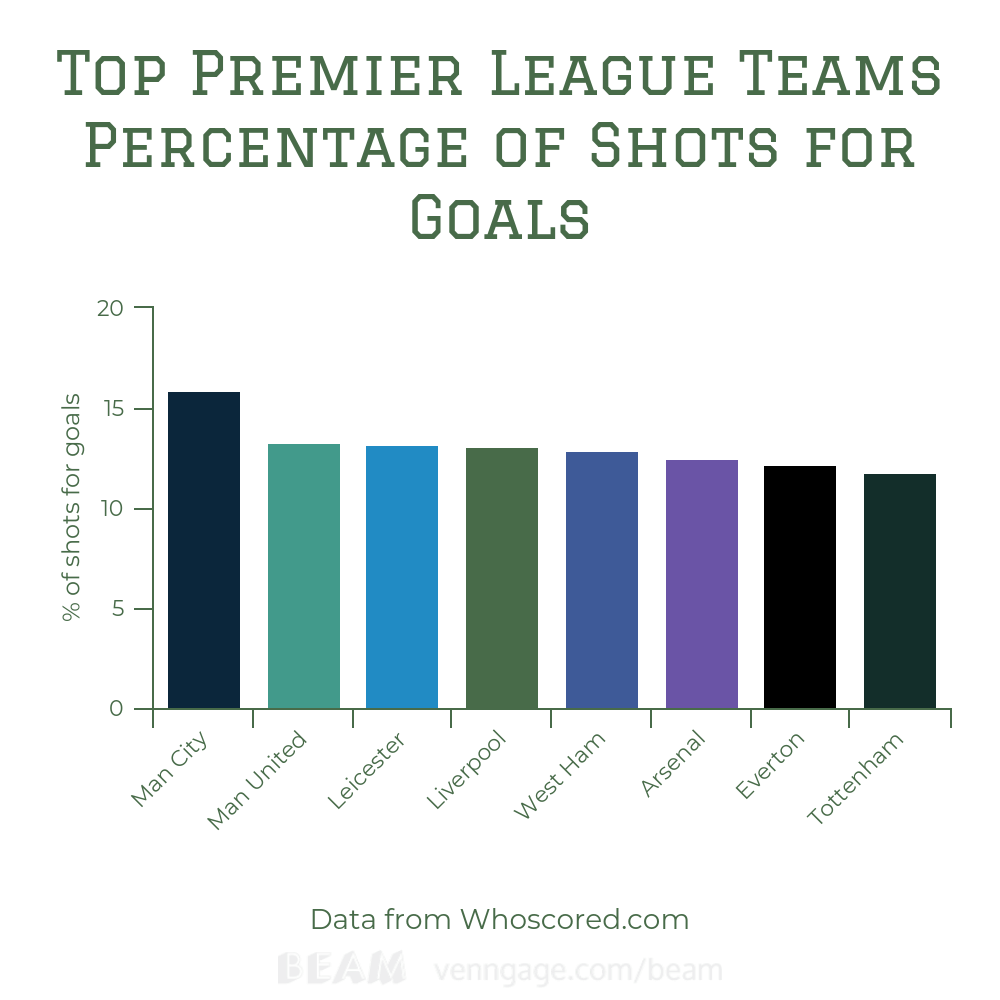 Stoke City, Brighton, WBA, and West Ham were all within 8 total shots for the season. Stoke and Brighton had 384 total shots, WBA with 376 and West Ham with 372. That is a really tight grouping for shots but West Ham had a much higher goal total. 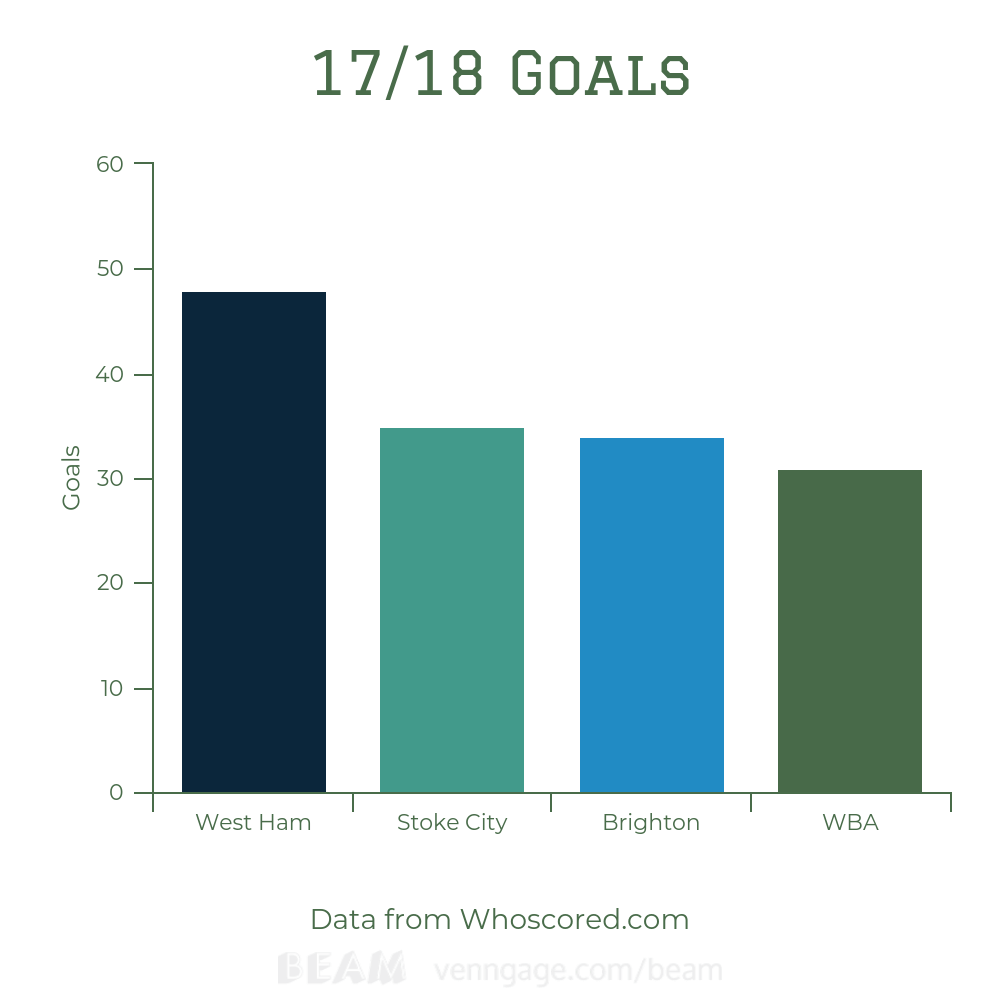 Will the Efficiency Continue?

West Ham manager Manuel Pellegrini has been consistent in improving his team’s efficiency. 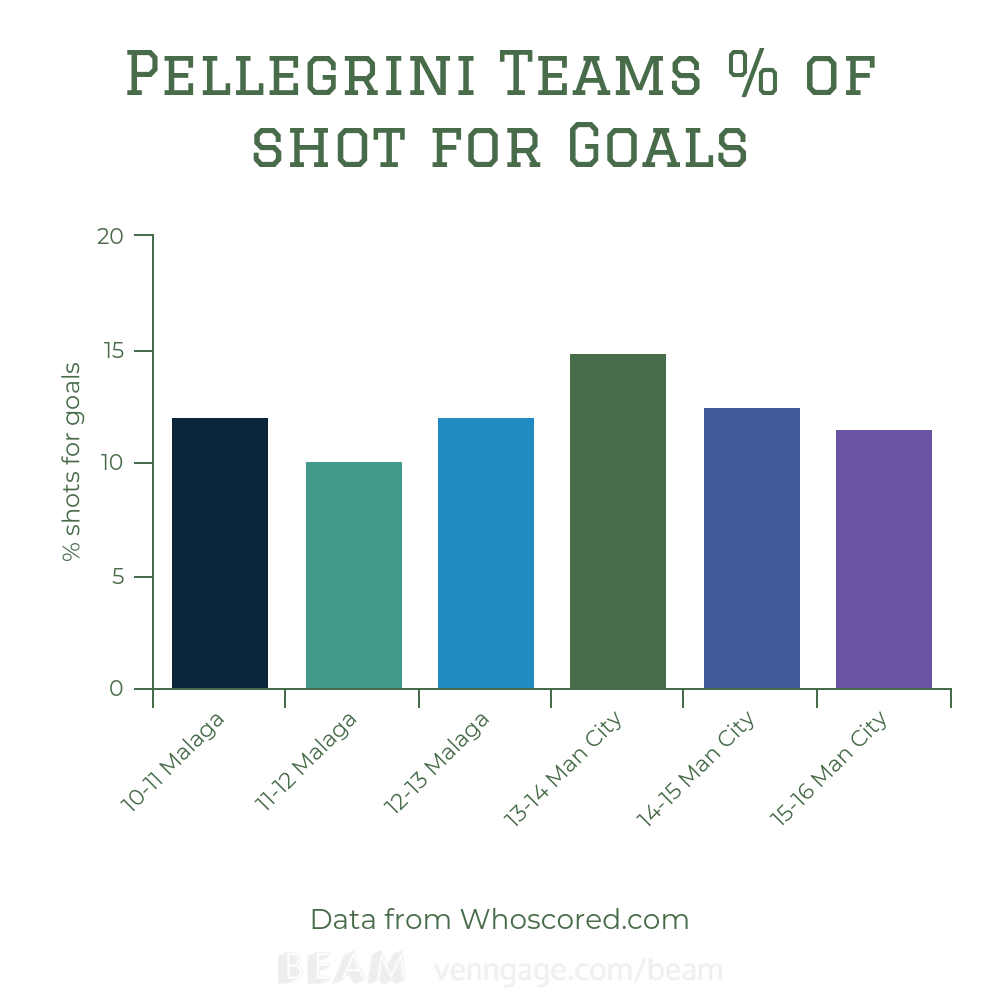 Pellegrini’s teams have been consistently above average in % of shots for goals. It is even more impressive when you look season’s prior to his taking over.

If West Ham does dip in efficiency this season it will not be because of Pellegrini’s coaching or recruiting. Pellegrini clearly puts an emphasis on high-value shots.

Javier “Chicharito” Hernandez is the outlier of all outliers in terms of efficiency of shots. In the last 8 seasons of league play, Chicharito has scored on an amazing 23.4% of his shots. He scores on every 4.3 shots he takes! While at Manchester United Chicharito scored 37 goals with all coming from inside the box. Getting in great spots and taking high-value shots is who he is. Look for him to get all the minutes he can physically handle under Pellegrini. 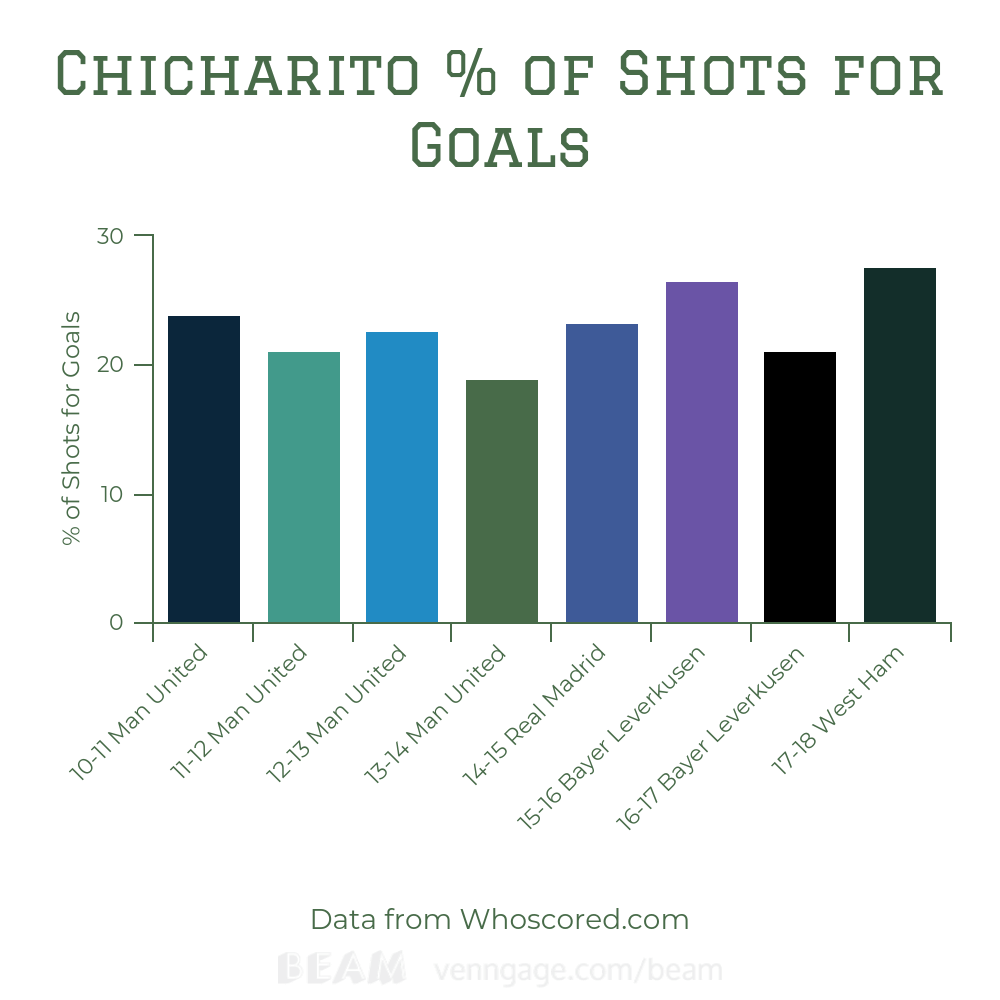 Will Marko Arnautovic Help or Hinder

Marko Arnautovic has been highly efficient in the last 3 seasons. Last season he had an outstanding return of 11 goals on 71 shots for 15.5% efficiency. This mirrored his 15-16 season at Stoke when he scored 11 goals on 70 shots. 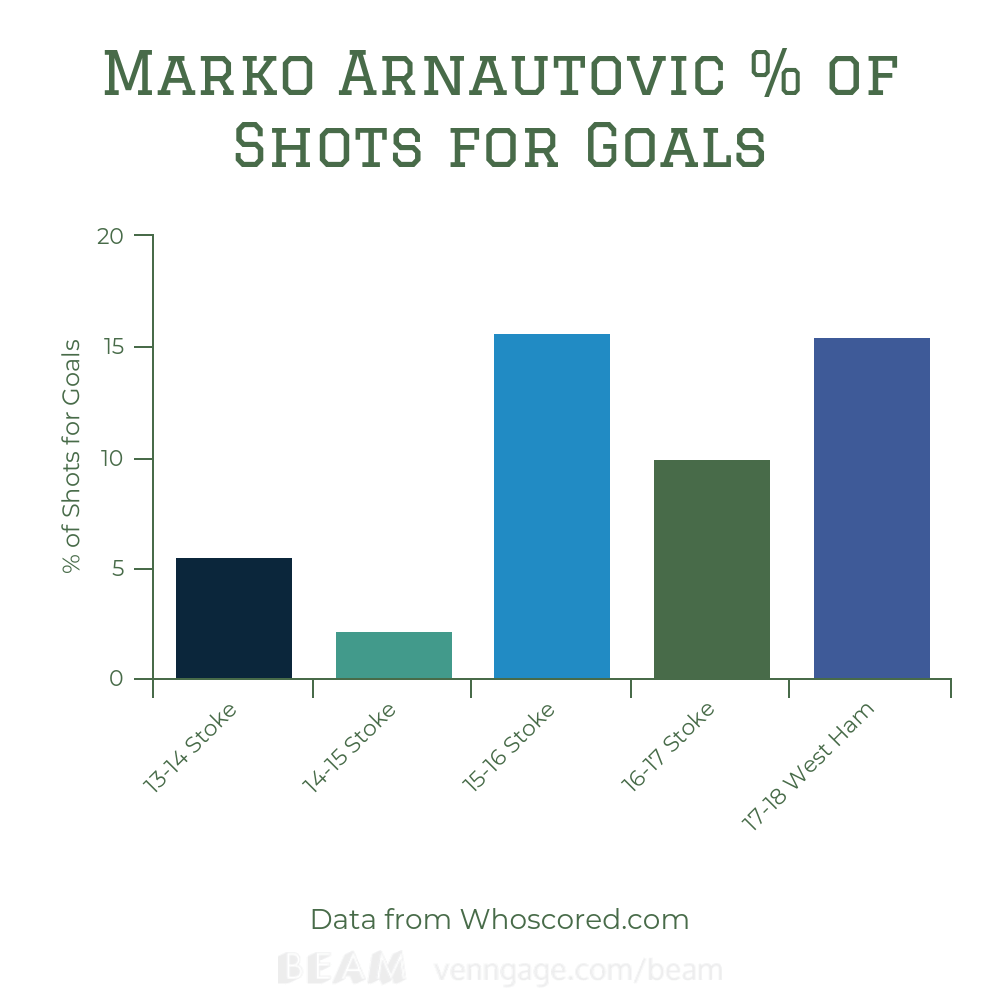 Looking at Arnautovic’s numbers there is a clear improvement in efficiency from a horrendously inefficient 13-14 season and 14-15 campaign at Stoke. In the 13-14 season, Marko took 72 shots with 46 of those shots coming outside the penalty area. Compare that to last season at West Ham when he took 71 shots but only 15 from outside the penalty area. It is clear to see why his goal count was only 4 in 13-14 and was 11 in 17-18. Arnautovic is taking smarter higher value shots.

Felipe Anderson has an interesting efficiency profile over the past four seasons at Lazio. 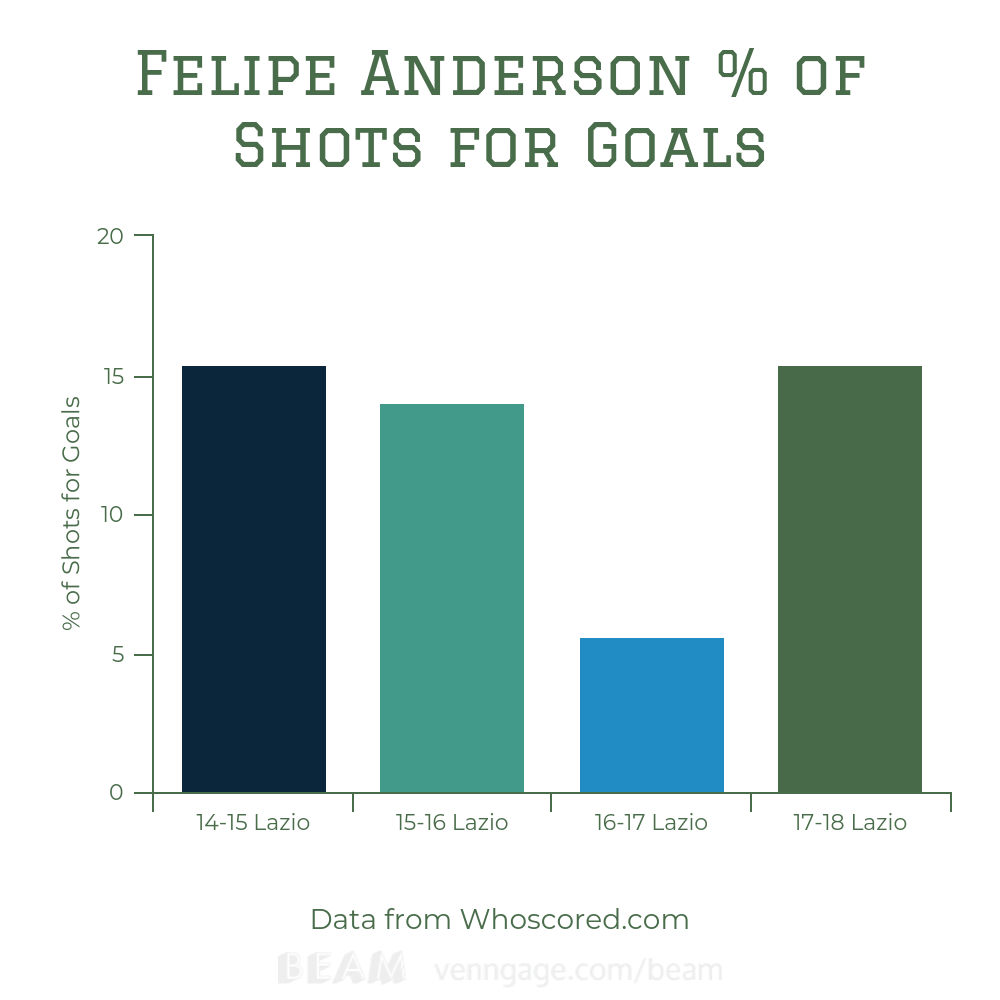 The 16-17 season was an abysmal 5.6% of shots for goals especially with the high volume of shots taken. He took 71 shots and only scored 4 goals. The other 3 seasons were outstanding ratios hovering around 15%. He is a key person to keep an eye on to see if the 16-17 season was an aberration. If he spends the season blasting low percentage hero shots then it is going to be a long season for West Ham fans.

West Ham were in esteemed company in terms of goal scoring efficiency last season. All the signs point to them being well positioned for another highly efficient shot to goal campaign. Pellegrini clearly improves teams efficiency and has a clear profile of shot efficiency in his managing career. West Ham also possesses returning players that have clear high-efficiency profiles with Chicharito being one of the most efficient goal scorers of all time and Arnautovic maturing into an efficient force.

The only possible concern is the high shot volume Felipe Anderson going wayward and reverting to his 16-17 Lazio style.

Why does it matter for West Ham this season? West Ham style of play and team makeup point towards no significant increase in the number of chances created this season. I see them staying within a similar range of total shots.

Additionally, as I’ve written before there is a marked decrease in the number of shots taken in the Premier League from 16-17 to 17-18 seasons. I predict that trend will continue as teams look to maximise the value of each possession ending with a high-value shot. West Ham last season was ahead of the curve in scoring these high-value shots.