On the 16th and last matchday of the Premier League before the Winter World Cup in Qatar, Manchester City played 11th-placed Brentford and lost the match 2-1. Manchester City were two points behind the league leaders Arsenal and five points ahead of third-placed Newcastle before the match. They hosted Chelsea in the evening and won the game 1-0.

Brentford will always be an unpleasant opponent even for big teams. However, they themselves have now been without a win for five games and were eliminated in the League Cup against fourth-division side Gillingham during the week.

In the end, Brentford deserved their victory thanks to united defensive tactics and the fact that they allowed fewer chances. City were given few opportunities to use their strong attacking pressing. Brentford switched quickly and were able to be dangerous by winning space quickly, especially at the beginning and end of the game.

In this tactical analysis article, we will focus on Brentford’s defence and tactics that made the victory possible. But first, we will start the analysis by introducing the two line-ups.

Pep Guardiola sent his team out in a typical 4-3-3 system. Ederson played in goal and the back four was made up of John Stones, Manuel Akanji, Joao Cancelo and Aymeric Laporte, who replaced Nathan Ake in the starting eleven. The midfield trio of Kevin De Bruyne, Rodrigo and Ilkay Gündogan was unchanged. And in attack, Phil Foden, Bernardo Silva and Erling Haaland, who returned to the starting lineup, started.

Thomas Frank, Brentford’s head coach, changed the formation from the last league game from a 4-3-3 to a 3-5-2 system. Against the ball, it then became more of a 5-3-2 system. The back five then consisted of Rico Henry, Ethan Pinnock, Ben Mee, Mathias Jörgensen and Mads Roerslev Rasmussen. The midfield was formed by Frank Onyeka, Vitaly Janelt and Mathias Jensen. Bryan Mbeumo together with Ivan Toney were to provide the offensive moments. 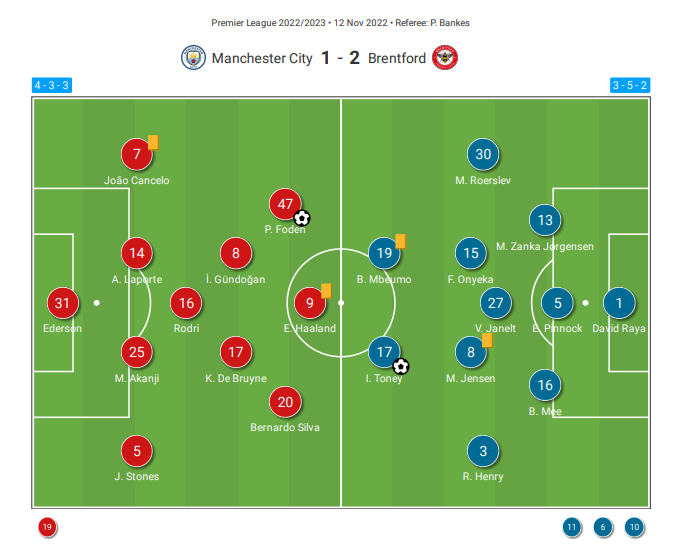 Brentford played against the ball in a 5-3-2 system. The focus was mainly on closing down the centre.  Overall, however, City were offered few spaces.

Brentford’s two full-backs are not compact against the three centre-backs, but cover City’s outside wingers on the last line. As a result, they do not give City the space around a possible block that could be created in the 5-3-2 system.

As City score many goals through fast combination play through the centre to the outside and from there a sharp cross into the golden zone, Brentford have taken away their opportunity with this. 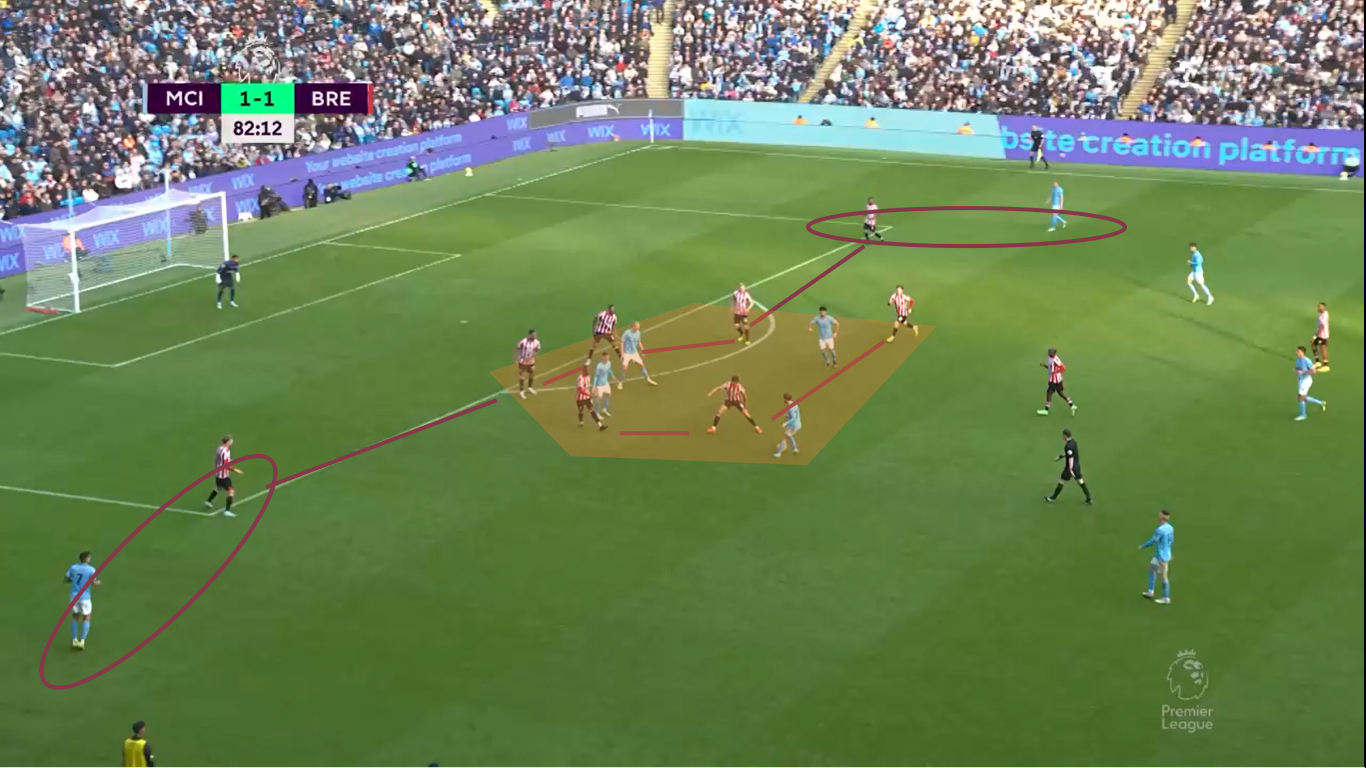 Here in the picture, you can see this described division of the five-men row well. The respective outside defender binds the outermost player on the last line. This avoids the outside players offering deep runs.

However, if the City player is played, you still have a good starting position to defend runs or crosses. The defenders do not first attack the ball when it is played, but put the opponent in front of it and at the latest when the ball is received.

The picture also shows Brentford’s intention to keep the centre compact. They put the opponent in a 6vs4 situation in a confined space. Deep runs by their own forwards are not possible for City.

Brentford forces City to run the ball a lot in their own ranks until a gap might open up. This also explains why there were so many shots on goal for City. These often arose in such situations, where a long-range shot was then resorted to as a means.

But if they could not win the ball directly, they dropped deep into their own half to give no space for deep runs. They also tried not to act in midfield pressing, because otherwise City could get behind the defence quickly through ball security and passing strength. 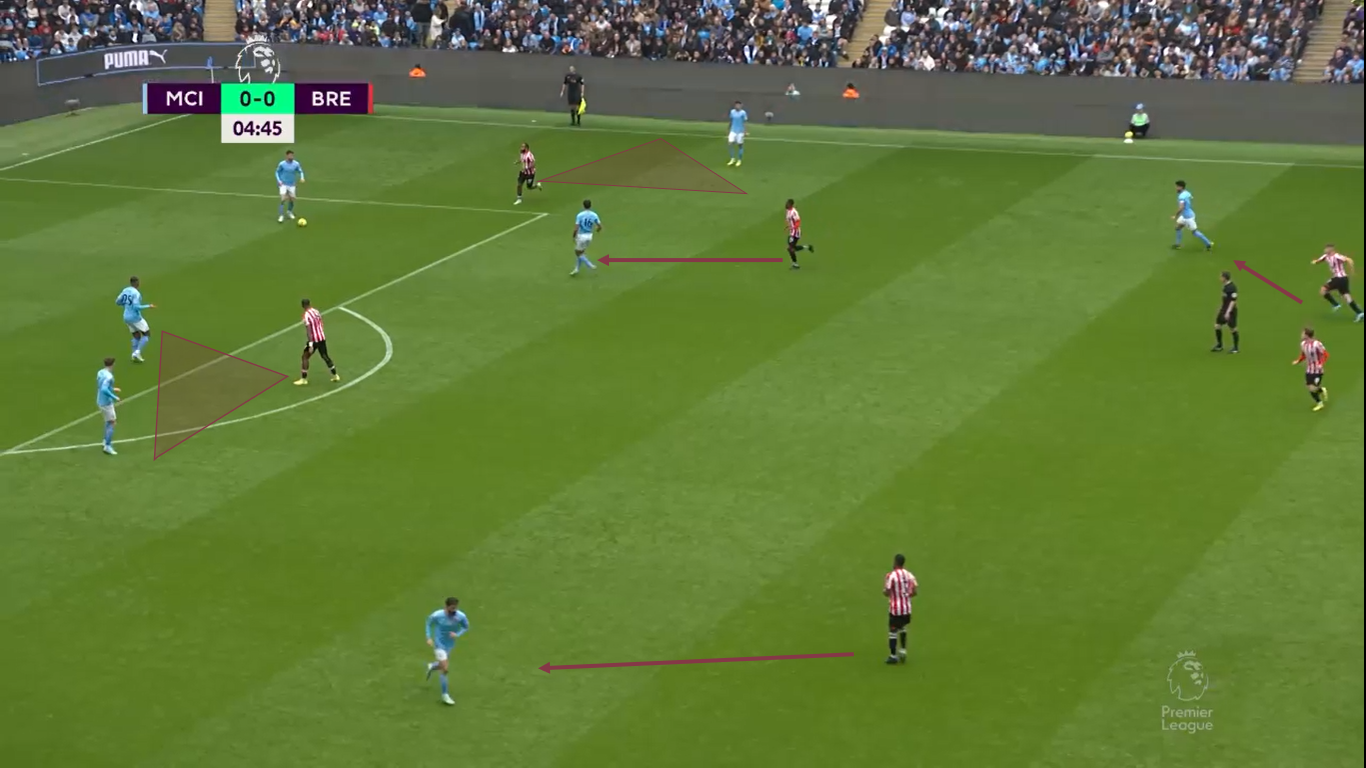 In the picture, you can see a situation where Brentford, after losing the ball in the opponent’s third, go directly into counter-pressing and try to win the ball back. In the next picture, you will see that only a few seconds later, Brentford are again defending compactly in their own penalty area. 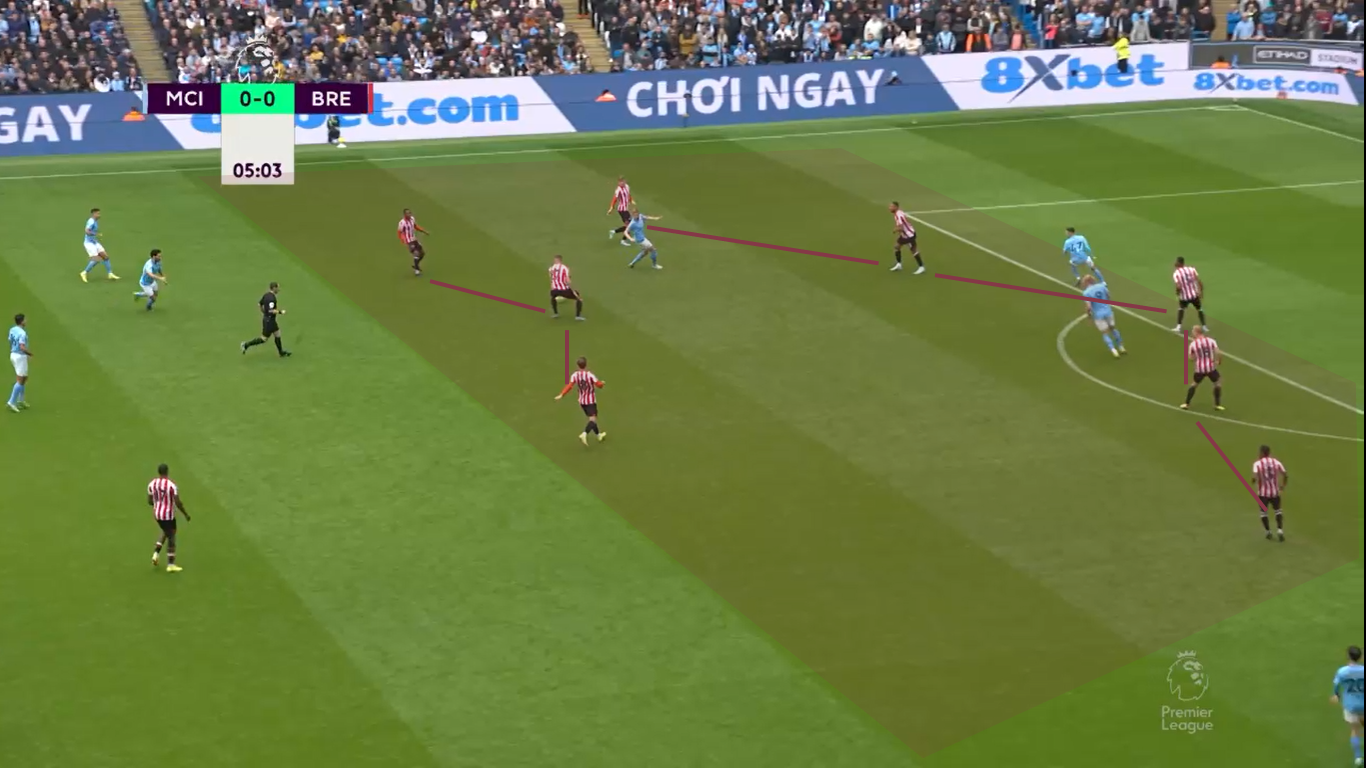 Here, you can see that eight of the own ten field players are in their own third and defend cohesively. In the backward movement, the midfield line tries to disrupt City’s switching game so far as they cannot run the counterattack unhindered. So Brentford were able to regroup well after unsuccessful pressing situations and were prepared for the next attack.

So City had, again and again, difficulties to use their strengths in combination and tempo play. Brentford were able to cut off their wingers on the last line. At the same time, they kept the centre compact and closed with two men in excess and did not allow any deep movement of the strikers.

As a result, City were rarely able to get dangerous finishes in the penalty area. Brentford allowed shots from outside the box because they are less dangerous and you cannot defend a team like City for 90 minutes without scoring.

Unsurprisingly, the equaliser came from a resting ball following a corner. At the same time, this goal was also a long-range shot. Nevertheless, it can be said that their defensive performance, both tactically and as a team, was very strong on this day from Brentford.

Now that we have analysed Brentford’s defensive match plan, let’s look at how they were able to succeed against Manchester City’s defence. Here, similar to their defensive tactics, a clear plan could be seen as the game progressed.

It was noticeable that neither a free kick nor a goal kick was played short. Sometimes all players were even pushed into the opposing third for throw-ins near the halfway line. In addition, the goalkeeper was the face-off man for the throw-in.

By pushing their own players forward, they were able to tie up almost all the opponents there as well. The ball was then always played long to the second post. There, several players gathered in a crowd.

The aim was to get the ball into the middle of the goal by winning an aerial duel. It was from such a situation that Brentford scored the opener. 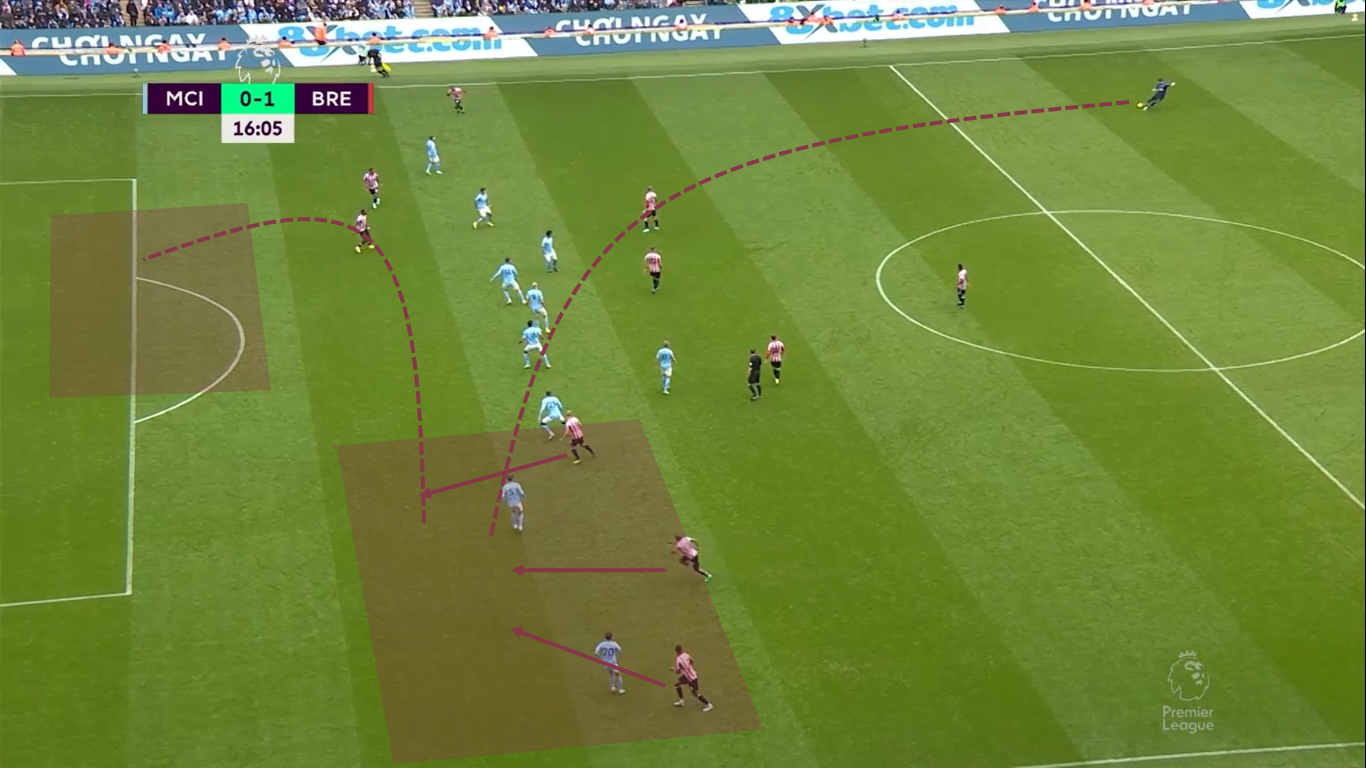 Here you can see an example of Brentford’s attacking play. The ball comes out of the own half and is hit into the coloured field. From there they try to get the ball into the next marked zone. In this way, they can get into the opposition penalty area in just two stops without taking much risk.

This means that Brentford can overcome large parts of the pitch without City having the possibility to win the ball. Since aerial duels are often 50/50, you have a higher probability of becoming dangerous here.

Another point that has become clear is the importance of second balls after a clearance or kick from your own half. Brentford had one of the two strikers as a target player. The midfielders as well as the forward partner surrounded the spaces where the second balls could come in.

As soon as the second balls were under control, the teammates started. They tried to play very quickly and steeply in order not to give the opposing midfield line any access. 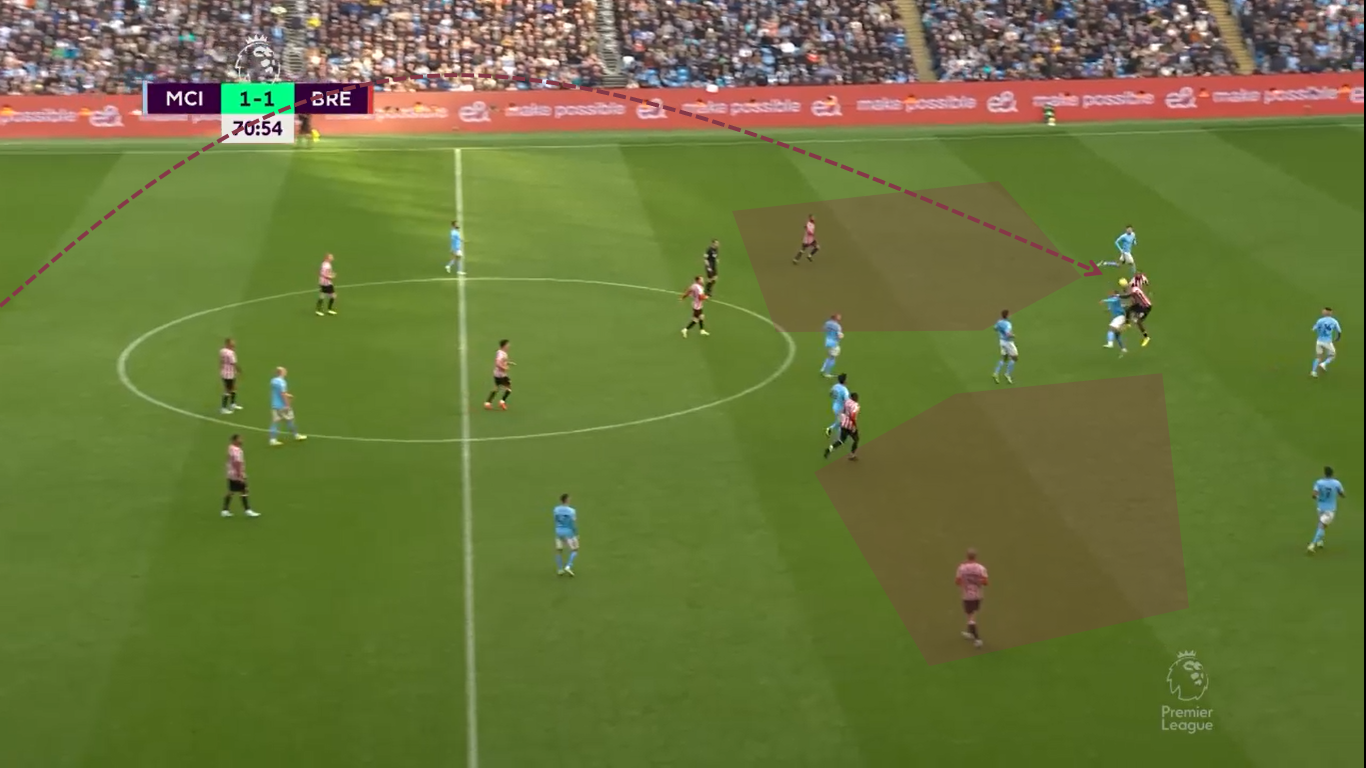 The picture serves to illustrate the importance of second balls after kicks or shows Brentford’s player opening. With Toney, there is a clear target player who tries to get the ball into the marked spaces.

Once the ball has entered one of the spaces, the teammates positioned there try to bring the ball under control. In this way, the front line of attack is overplayed. 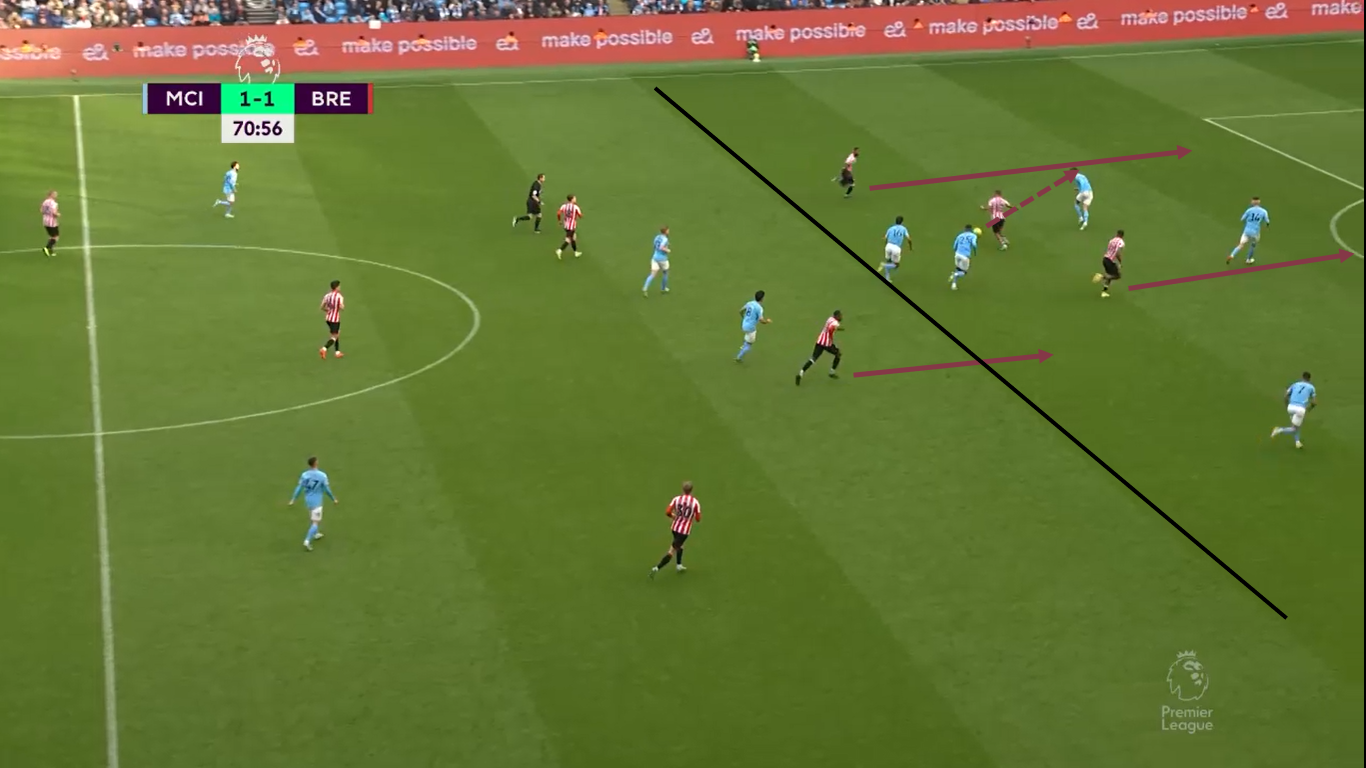 As you can see here, Brentford were able to control the second ball. Now. they have already passed five City players and are in possession of the ball in the opposing third.

Deep slanting passes can cause problems for City’s defence as the opposition can run away at their backline. With midfielders moving in behind, Brentford can give different opportunities to those possessing the ball. This allowed Brentford to cause Manchester City problems time and time again with simple footballing means.

Brentford aimed to play out their attacks as quickly and efficiently as possible. They wanted to avoid running into a counterattack after losing the ball. More about these situations will follow later.

Not only by the fast-played attacks but also by the high balls, where the ball is unconquerable for a long time, Brentford played it safe. As a result, City did not get into their usual attacking routines.

Manchester City only created a few high-percentage scoring chances and therefore always looked for the finish from the second row. When they did create chances, however, they followed a similar pattern.

As soon as Brentford lost the ball in the forward movement and were unsorted as a result, spaces opened up for City. The deep running of the players allowed them to play forward quickly and make it difficult for the advanced opponents. 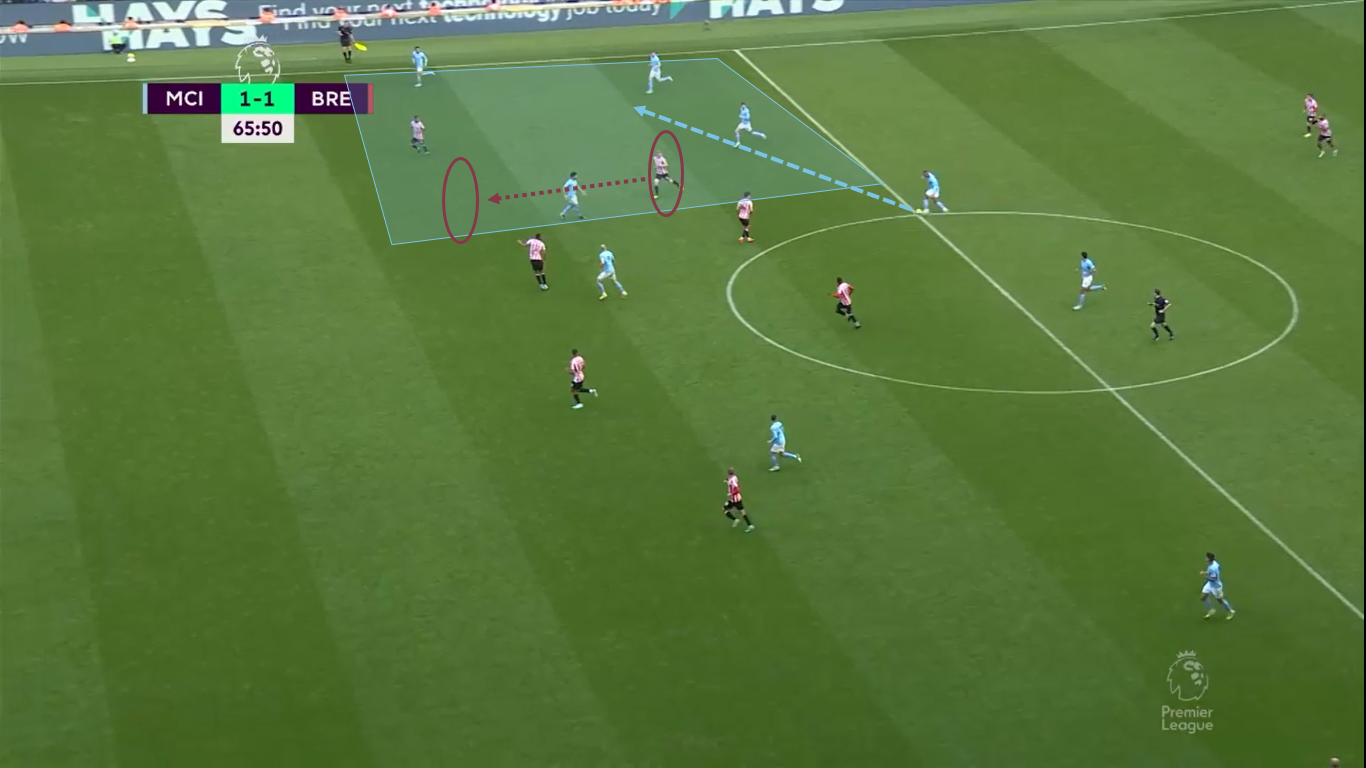 Here is an example of how City could counter Brentford when they lost the ball in the forward movement. The player circled in red is a centre-back from the back five. By moving forward and then losing the ball, there is a lot of space for City to play in.

Also, City have a clear surplus on the side, which didn’t make it any easier for the rest of Brentford’s defence. The ball gets to De Bruyne, who immediately spots the gap and plays into it. He had four starting players in front of him, as you can see in the next picture. 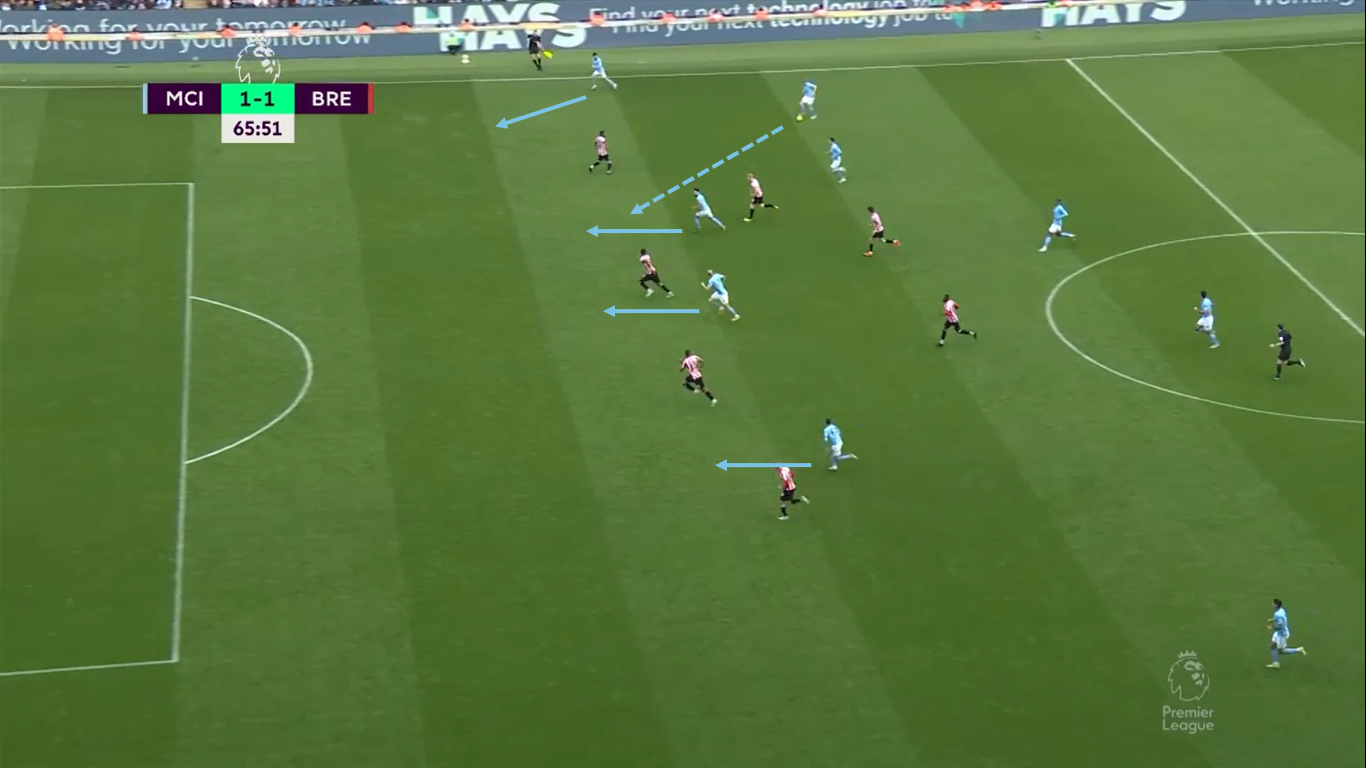 Brentford’s advanced centre-back continues to struggle to close the gap as City also play very fast and deep. It is also even more difficult for the defence to defend as they have to defend facing their own goal.

For them to have been successful, they could have or should have played those switching situations even better. They were also the only possibilities to get dangerously close to the goal and not to choose the distance shot.

Finally, we summarise the most important points that have just been analysed:

Brentford were convincing mainly because of their compact defence. They allowed many chances in numbers, but the quality of City’s chances was not very high on average.

In addition, Brentford were able to penetrate dangerously into the opponent’s half time and again through low-risk attacking and build-up play. A clear plan by their own team allowed them to take advantage of a clear principle.

They took away City’s very strengths through various tactical means. Through the distorted five-man defensive chain, they were able to take the wing play almost completely out of the game.

Due to many long and especially high balls in the build-up to the game, City could not win high balls through their good pressing. As a result, they did not get into aggressive pressing situations at all.

Overall, a great tactical performance by Brentford was rewarded with a win and City have to let Arsenal pull further away. 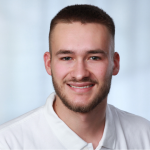 My name is Marius and I am crazy about football. Currently working as a student trainee at FC Bayern Munich as a match analyst. 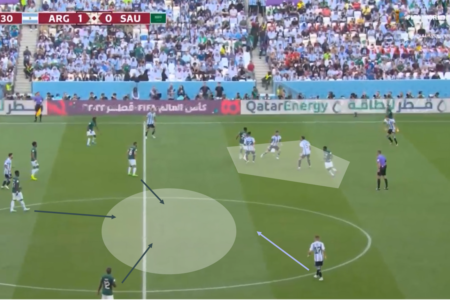 On the first matchday of Group C of the third World Cup day, Argentina and Saudi Arabia met at the […] 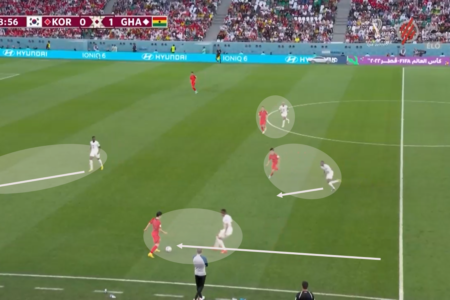 On the second matchday of Group H, South Korea and Ghana met at the Education City Stadium. Both teams failed […] 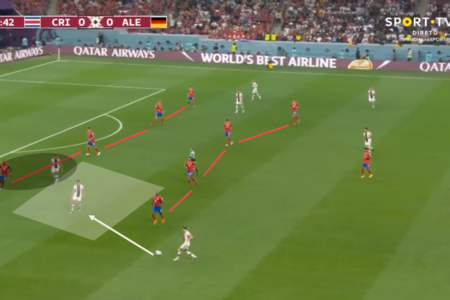 Showdown in Group E! On the 3rd and last matchday of Group E, Costa Rica and Germany met at the […]