Premier League 21/22: How Leeds’ late comeback against Wolves could be their start towards Premier League safety – tactical analysis

Both sets of fans will understand what each other are going through, about their manager’s situation, albeit these occurrences take place at a different time for the two clubs. Both Wolverhampton Wanderers and Leeds United understand the impact of a manager and their lasting effect and unknown entities that follow once those figures depart. Nuno Espirito Santo brought Wolves from the EFL Championship to a Europa League quarter-final, but things got stale at the Midlands club and the Wolves hierarchy decided to make a change.

In came Bruno Lage, a Portuguese manager who is excelling during his first season. Leeds are now going through this same managerial transition, with the iconic Marcelo Bielsa, after a series of poor results, leaving them in a dogfight at the bottom of the table. Most would have thought Bielsa’s place at Leeds would be indispensable, but the fear of relegation can change situations.

Jesse Marsch, a product of Red Bull’s head coach conveyer belt, took over as manager of Leeds United, with all supporters hoping the American manager can secure a place in England’s topflight next season. Regardless of his team performance, Marsch lost his first two matches against Leicester and Aston Villa, before beating Norwich in a crunch game at Elland Road. Marsch’s next match was against Wolves at the Molineux Stadium, hoping to build upon their crucial win over the relegation rivals.

This tactical analysis will discuss the contrast between Wolves and Leeds about their attacking and defensive style and strategy. Additionally, I will unpick the consequence of Raúl Jimenez’s red card and how they came changed from that point.

The home side made use of a 3-4-3 formation with José Sá in goal. Within the back three, Willy Boly, Conor Coady and Romain Saïss, with Rayan Aït-Nouri and Jonny at wing-back. In midfield, Rúben Neves and João Moutinho. The front three comprised Leander Dendoncker, Daniel Podence, and former Atletico Madrid Raúl Jiménez. 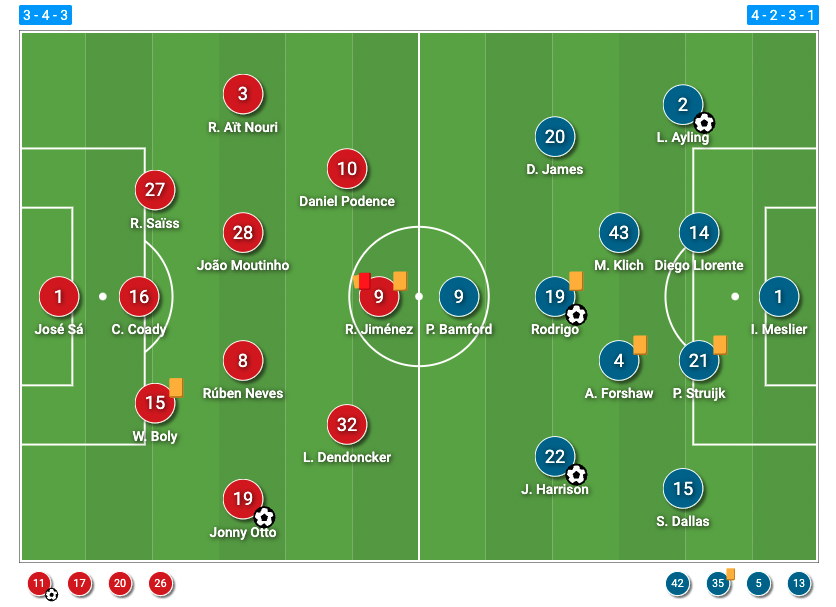 A contrast in attack and defence

Through observation, one aspect is clear; Bruno Lage’s men have his philosophy and game-plan mastered while Jesse Marsch still has some work to do on the training pitch. From a defensive standpoint, the Wolves made use of a 3-4-3 mid-block. Their aim; was to block passing lanes into Leeds’ double pivot, Mateusz Klich and Adam Forshaw; resulting in the away side passing the ball to their full-backs during the first phase. Wolves’ midfield two, Rúben Neves and João Moutinho would be slightly higher, condensing the space in-between the lines. 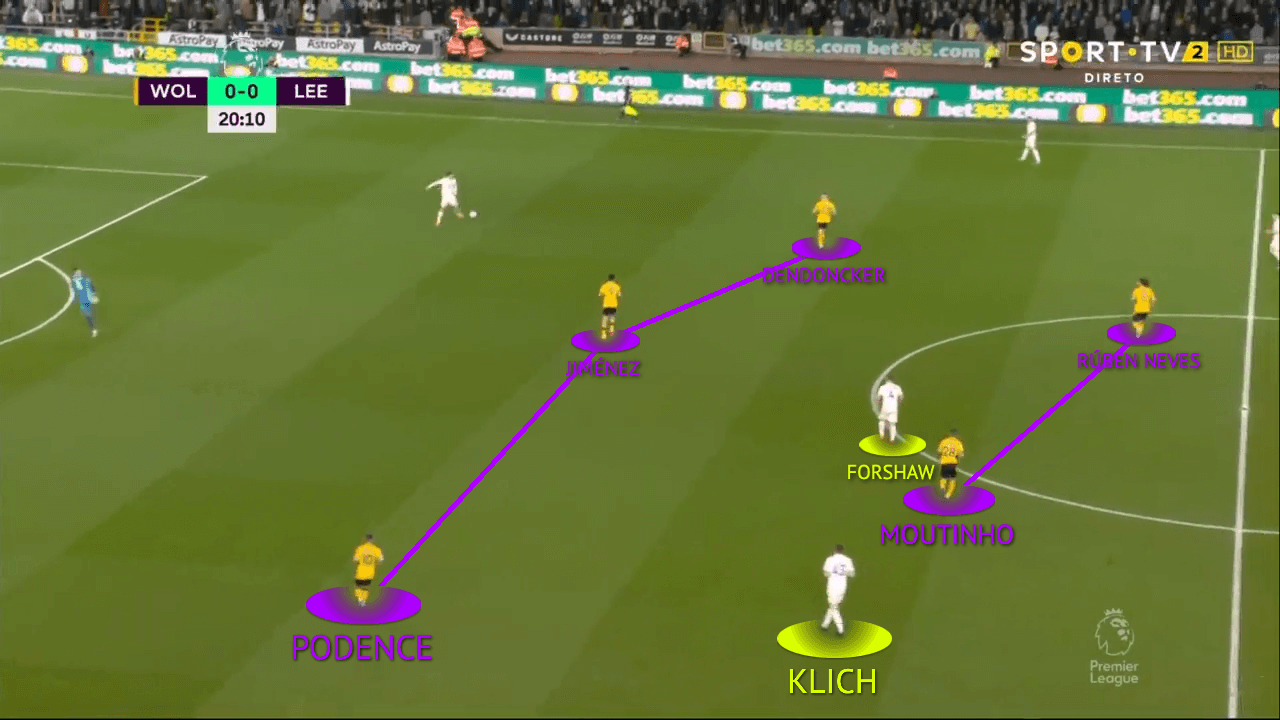 When the ball eventually shifted wide, Wolves’ ball side winger would press Leeds’ ball-carrying full-back. While this occurs, a number eight and the ball-side wing-back will position themselves in-between Leeds’ half-winger. This situation put Leeds in a terrible position. Leander Dendoncker’s body position keeper Adam Forshaw within his cover-shadow, eliminating him as a passing option into the central area. Further, the position of Rúben Neves and Jonny removes Jack Harrison from the picture, as both Wolves players are standing right on either side of him. 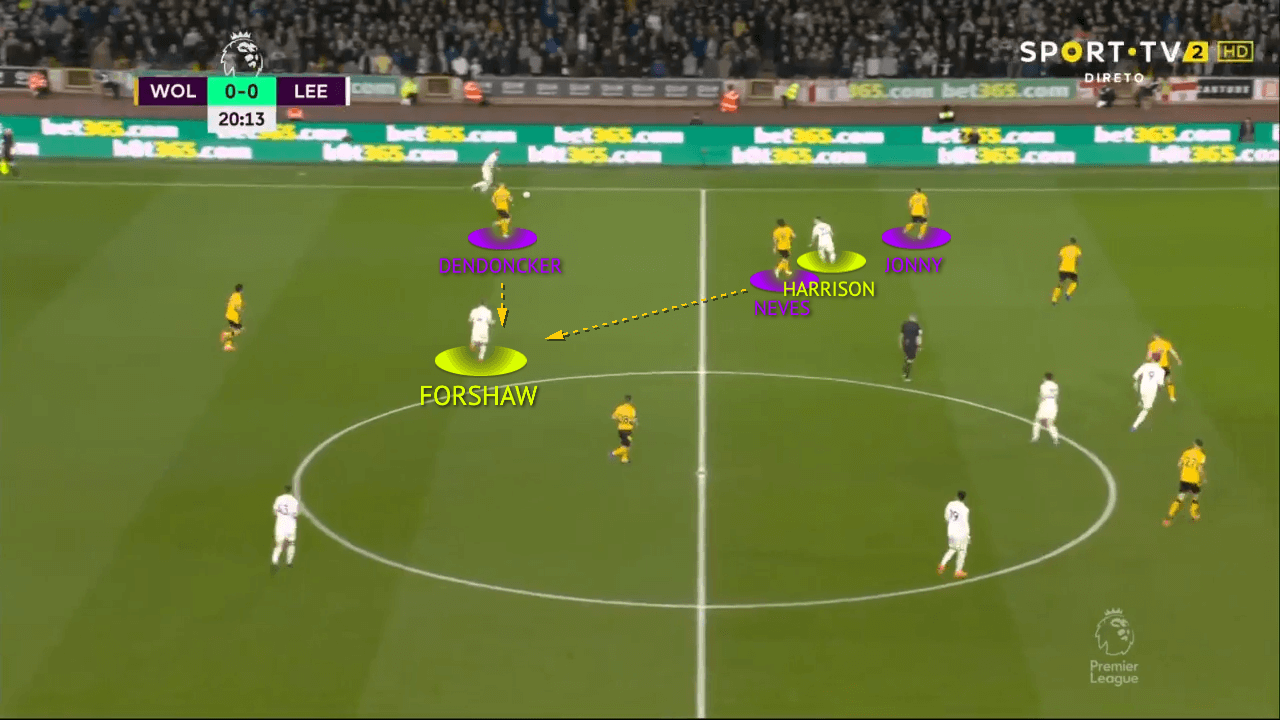 Another excellent tactic Wolves utilised with the first half was creating instances of numerical superiorities within the defence. On countless occasions, Leeds would attempt to progress the ball through the use of wide rotations to create space. To counter this Wolves outside centre-back would push higher, resulting in a 4v3 to their advantage. 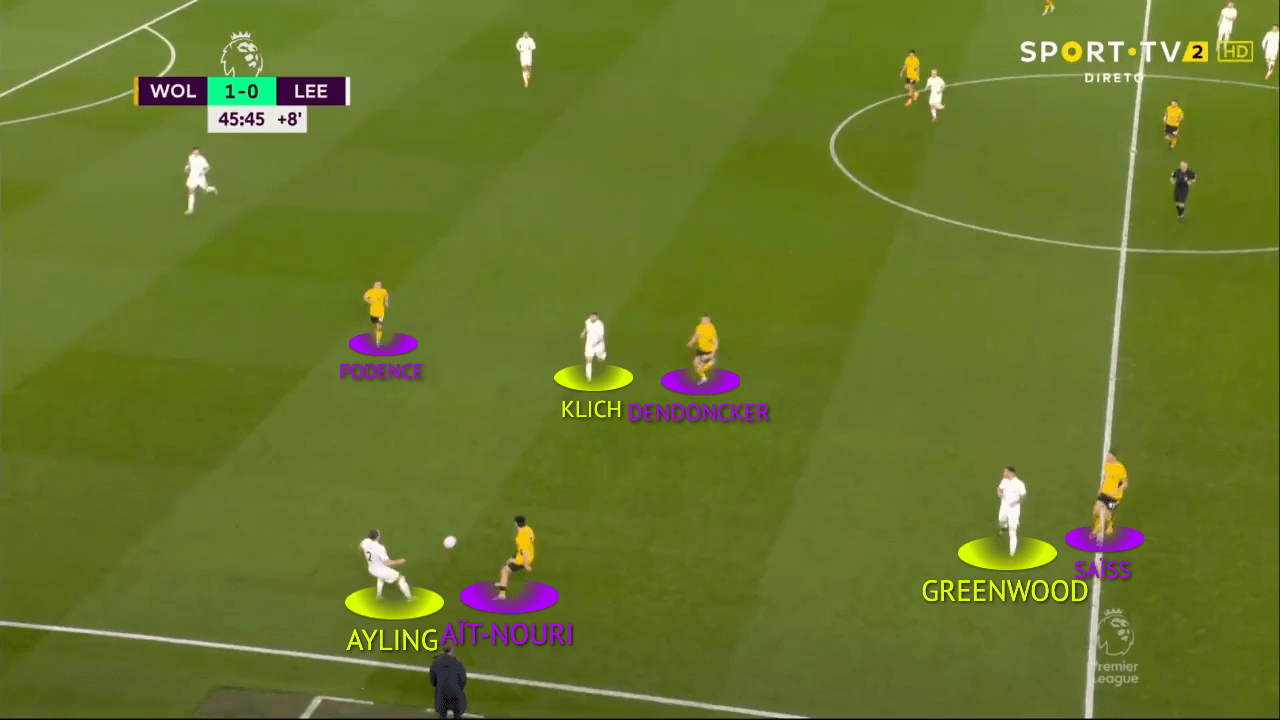 As mentioned prior, Leeds manager Jesse Marsch has some fine-tuning to do regarding his team. He is attempting to utilise a system that differs slightly from what was used previously; his team game with a plan, but the execution of the said plan was an issue in the first half. Wolves’ defensive structure was of high quality on Friday and would stifle many Premier League attacks. With this being said, Leeds has now answered the questions Wolves were asking. Marsch’s automation was failing during this match, as ball progression was a massive issue, but Leeds found a way through, but was let down by poor quality and decision-making.

Here, Stuart Dallas and Jack Harrison create a good give-and-go exchange down the left flank. The issue is, Dallas forces the issue, attempting to make a pass to Rodrigo when Adam Forshaw is in space and can receive, turn, and continue to play. From this circumstance, Leeds loses possession and faces a counterattack. 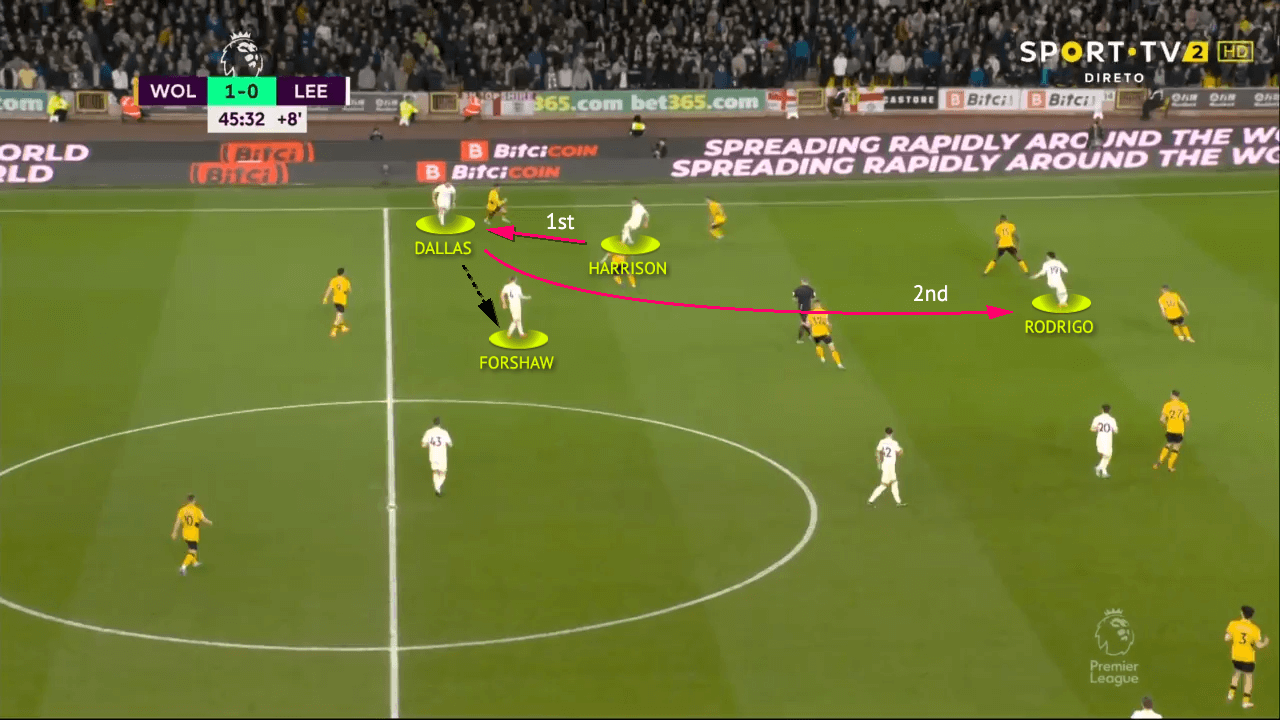 Leeds’ offence is not yet fit and firing as spectators might have imagined, and from a defensive point of view, the defence has seen no improvement since the managerial shift. While Wolves showcased a coherent build-up scheme, Leeds’ pressing was simply powerless. It is not unusual that Jesse Marsch wanted his team to counter-press, as he is from the Red Bull school of thought. The issue with counter-pressing is, if not done correctly, said the team is forfeiting valuable space to their opposition, which occurred often for Leeds.

Here, Dan James flicks the ball behind him, hoping for a teammate to latch onto into and continue the attack. Because of the Wolves’ numerical advantage, Leeds lost possession. 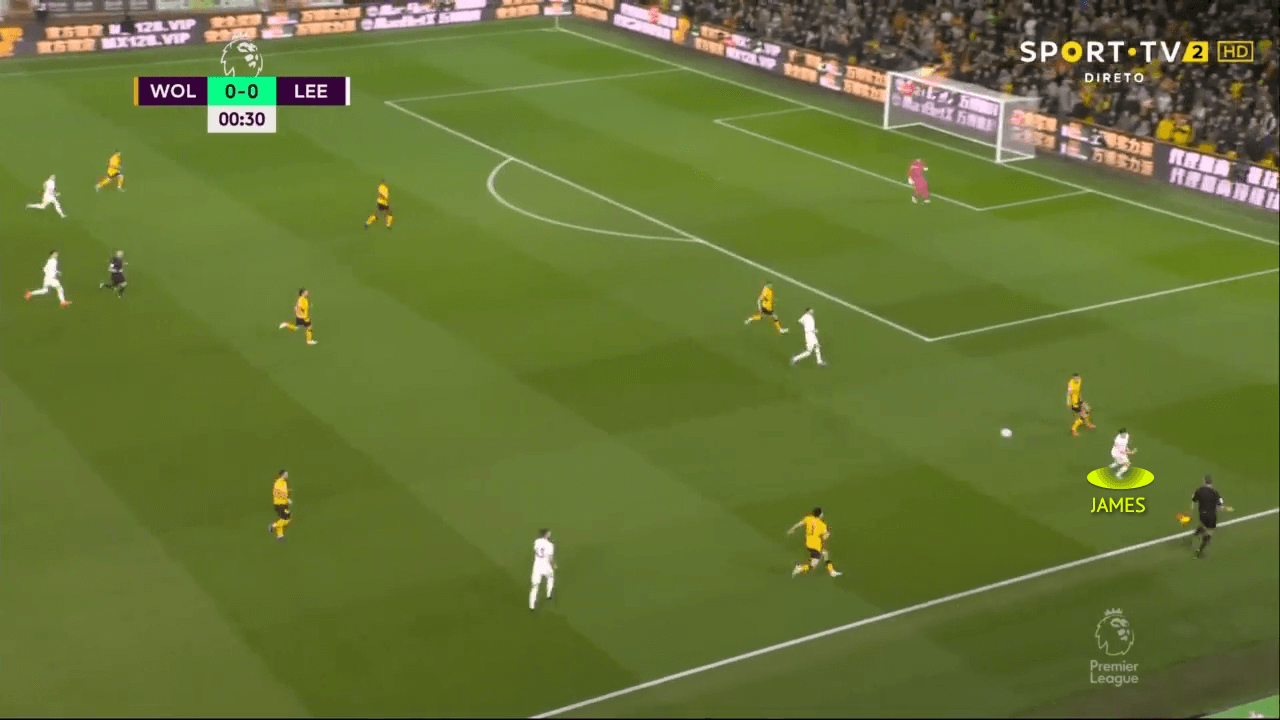 Rayan Aït-Nouri picks up the loose ball, which ignites Leeds’ counter-press, but the three Leeds players around the ball gravitate the ball carrier and ignore possible passes. Aït-Nouri finds João Moutinho is a pocket space that can progress unopposed. 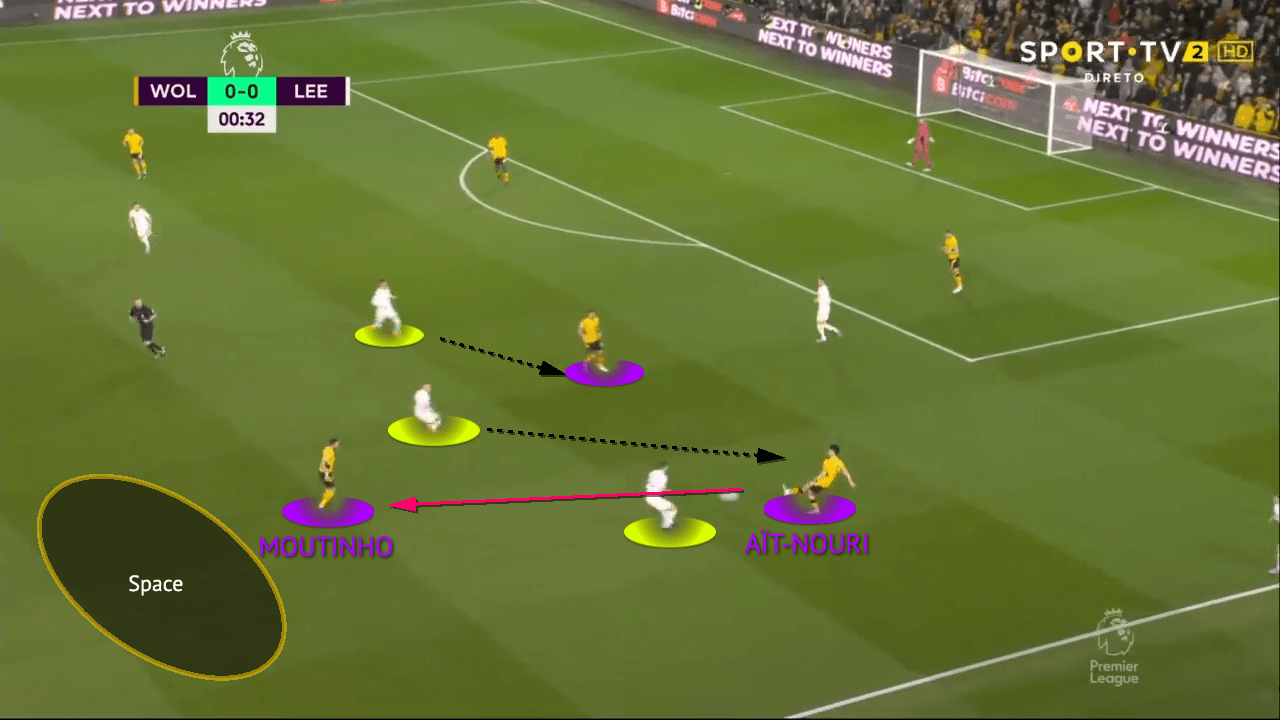 Leeds’ counter-press was nothing to shout about, and their defence of Wolves’ build-up did during goal kicks carry on this negative theme. During this phase, Wolves mechanisms were used to bypass Leed’s front men. João Moutinho would push hard against the by-line from a central position to drag an opposition marker, resulting in extra space for teammates. However, Leeds created problems of their own, with their 4-2-3-1 press.

Using a 2-2 structure from the front, Leeds tries to apply pressure to Wolves’ back-line. 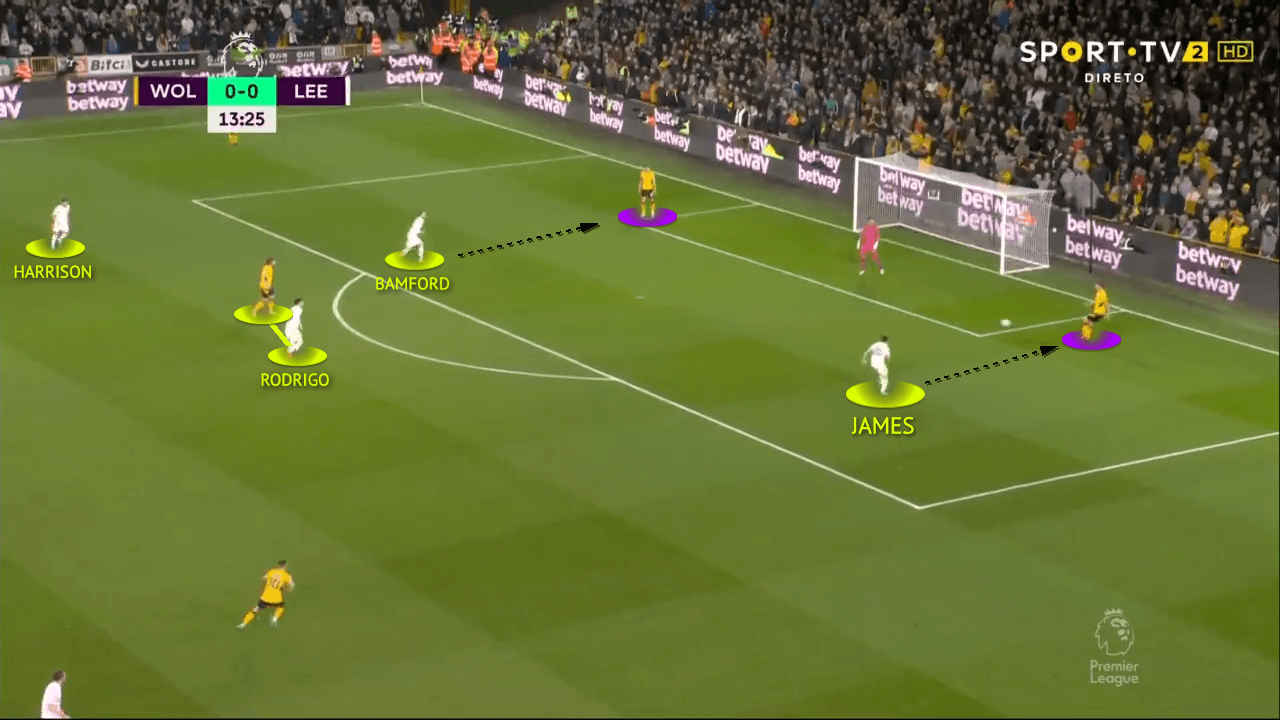 This issue is, Leeds afforded Daniel Podence way too much time within the right half-space. Leeds opted for a high press, with their number 10 and double pivot, man-marking Wolves’ number six and central midfielders. This system against their opponents ended up being problematic because of the 4v3 numerical superiority as both Leander Dendoncker and Daniel Podence dropped deeper into the half-spaces. During this specific scenario, Podence picked up the ball and travelled forward against no marker. 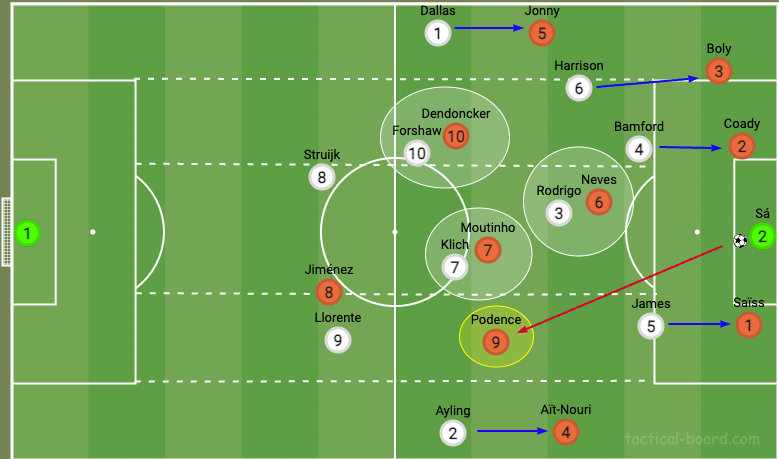 It is safe to say, Wolves had the better of their opponents during the first half, and their domination continued during the opening exchanges of the second half. Wolves’ ascendency seized for their worst when Raúl Jiménez received his second yellow card of the match, leaving his team to defend their 2-0 scoreline with 10 men. The Mexican striker is vital to the way Bruno Lage wants to play. Jiménez is doing well during aerial battles; together with his link play with both wingers and running in behind. With his presence no longer on the pitch, both teams were affected, but in different ways.

Regarding Wolves, Bruno Lage transitioned from a 3-4-3 formation to a 5-2-2 formation in-possession and a 5-4 formation out of possession. Wolves attacked with two conventional wingers, but suffered when entering the final third, because of their lack of a focal point in the middle. This suffering continued defensively, and their 5-4 relinquished their press from the front, handing Leeds free rein during the first phase.

It can be a tall order when attacking a team of 10-men, looking to grind out a result and defend first. Given that, Leeds’ comeback of a 2-goal deficit should be commended to a certain extent. As mentioned previously, with Jiménez excluded, Wolves’ strong defensive system consequently changed, putting the initiative on Leeds to play. With the extra space, Robin Koch could play quick ball to each flank and progress attacks quickly.

Leeds’ use of the wide areas was a massive asset towards them, creating shooting opportunities. Within this territory, Leeds conducted good countermovements to create space and passing lanes, as well as overloading a particular side to isolate another.

Here, Stuart Dallas is on the ball on the left-wing. Jack Harrison does well to drag his nearby marker Willy Boly and disorganise Wolves’ defensive line. The movement creates space within the left half-space, which Rodrigo makes the most of. 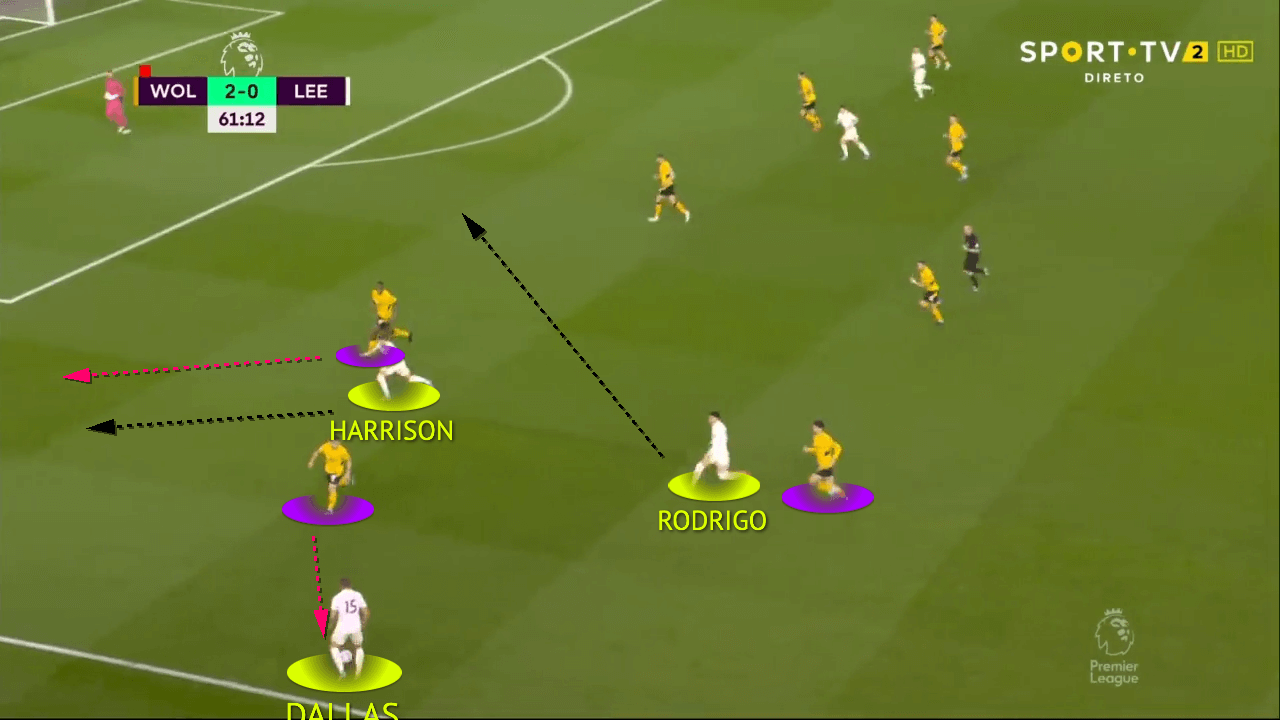 The principle, ‘overload to isolate’ can be best depicted during Leeds’ first match which started their road to redemption. Leeds stationed five players on the left-hand side, leaving Luke Ayling and Rayan Aït-Nouri 1v1 at the back post. Robin Koch was able to quickly switch the ball to the right-hand side of the pitch, over Aït-Nouri. Ayling hit the post from his initial shot, but Jack Harrison secured the goal from a rebound, and the comeback was on for that point on. 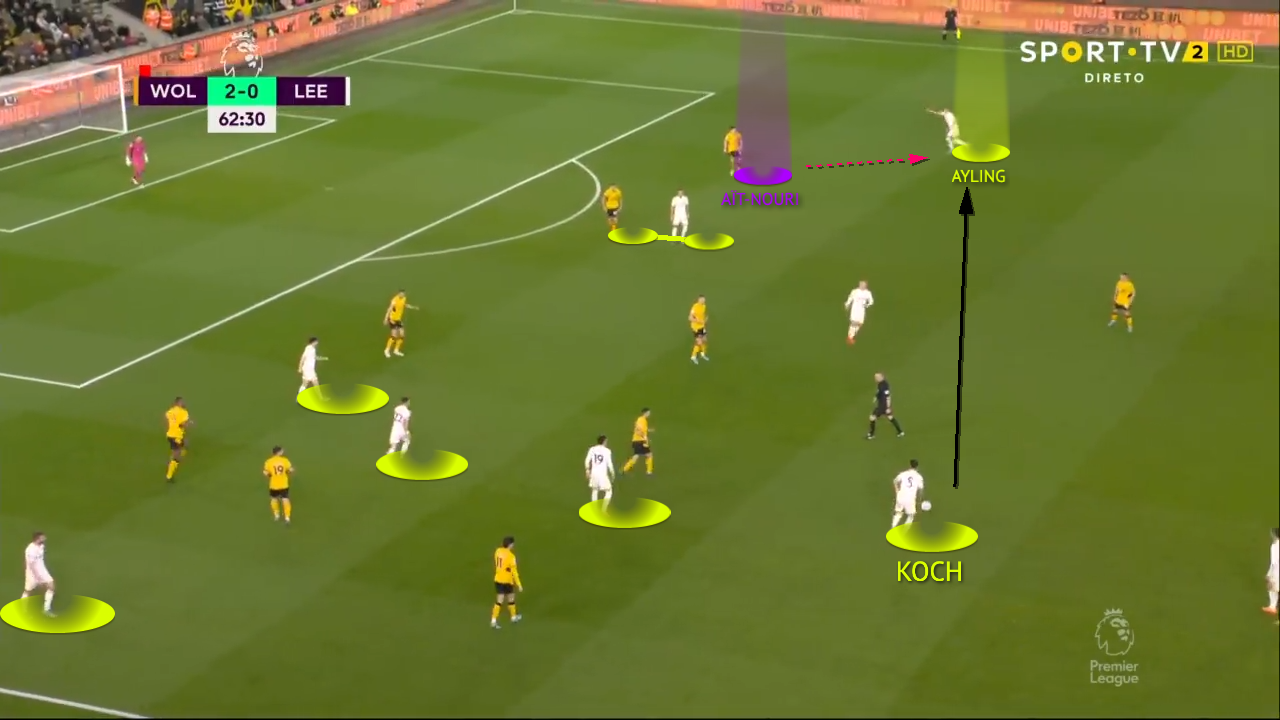 Both Bruno Lage and Jesse Marsch have big shoes to fill; Lage has impressed Wolverhampton so far this season. Marsch has entered a club in freefall, looking to pick them up and keep them afloat in the league. Leeds’ new manager has had a mixture of results, with a disappointing loss to Aston Villa and a positive result against Norwich. The Americans will hope for some consistency, with Wolves being their next opponent. Leeds, during the first half, put on a poor display, as they were lacklustre with and without the ball. Through a massive turn of events involving Raúl Jiménez, Leeds was able to gain control. This win will do a lot of good for Marsch as he can great some momentum as the season finale arrives ever closer. As for Wolves, Lage can take positives and negatives out of this result. His team were excellent first half, and without the red, the result could have been different. Regardless, Wolves dropped three points, which could dent their European football hopes.