The 22nd game week of the 2021-22 Premier League saw league leaders Manchester City host Chelsea in the repeat of last year’s Champions League final. Manchester City were coming into this game on the back of an 11-game winning run in the league as Pep’s men have started to take a seemingly unbreakable lead over their title rivals Liverpool and Chelsea.

Chelsea, who were at the top at the start of December have suffered due to injuries and COVID along with some poor form to their key players. They lay 10 points adrift of their opponents and Tuchel was hoping to cut down the lead to 7 points.

This tactical analysis discusses the tactics used by both the managers and how City managed to beat Chelsea and take the three points home. Let’s begin the analysis. 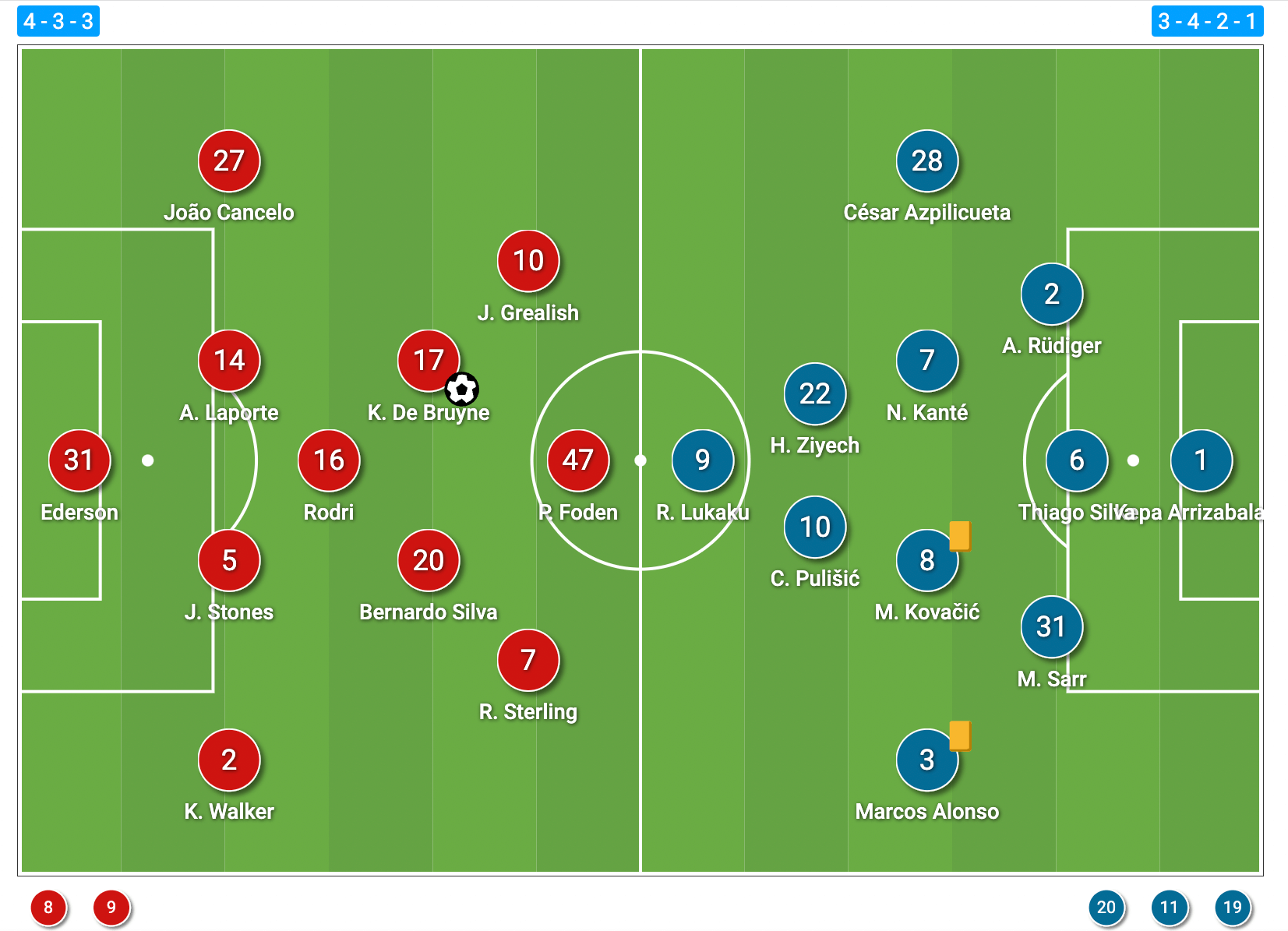 Chelsea, meanwhile are still without their first-choice wing-backs, decided to go with their old formation of 3-4-3 where Kante, Thiago Silva, Alonso, Pulisic and Ziyech were drafted into the lineup instead of Jorginho, Christensen, Mason Mount, Timo Werner and Hudson-Odoi.

In our analysis, we saw how Arsenal took Man City to a wild ride in the first half where the usually controlled and dominating defending champions found it really difficult to play their style. Though they lacked both penetration and control in that game, here they were able to at least get back the latter which was partially due to how Chelsea decided to set up.

Chelsea played with a high line and were very much focused on setting into a mid-block with very few spaces in between the lines. This was done to ensure the likes of Grealish, KDB and Bernardo Silva don’t get the space they need to operate in between the lines. This gave them another option that is to attack the space behind the high defensive line and City constantly tried to do it. 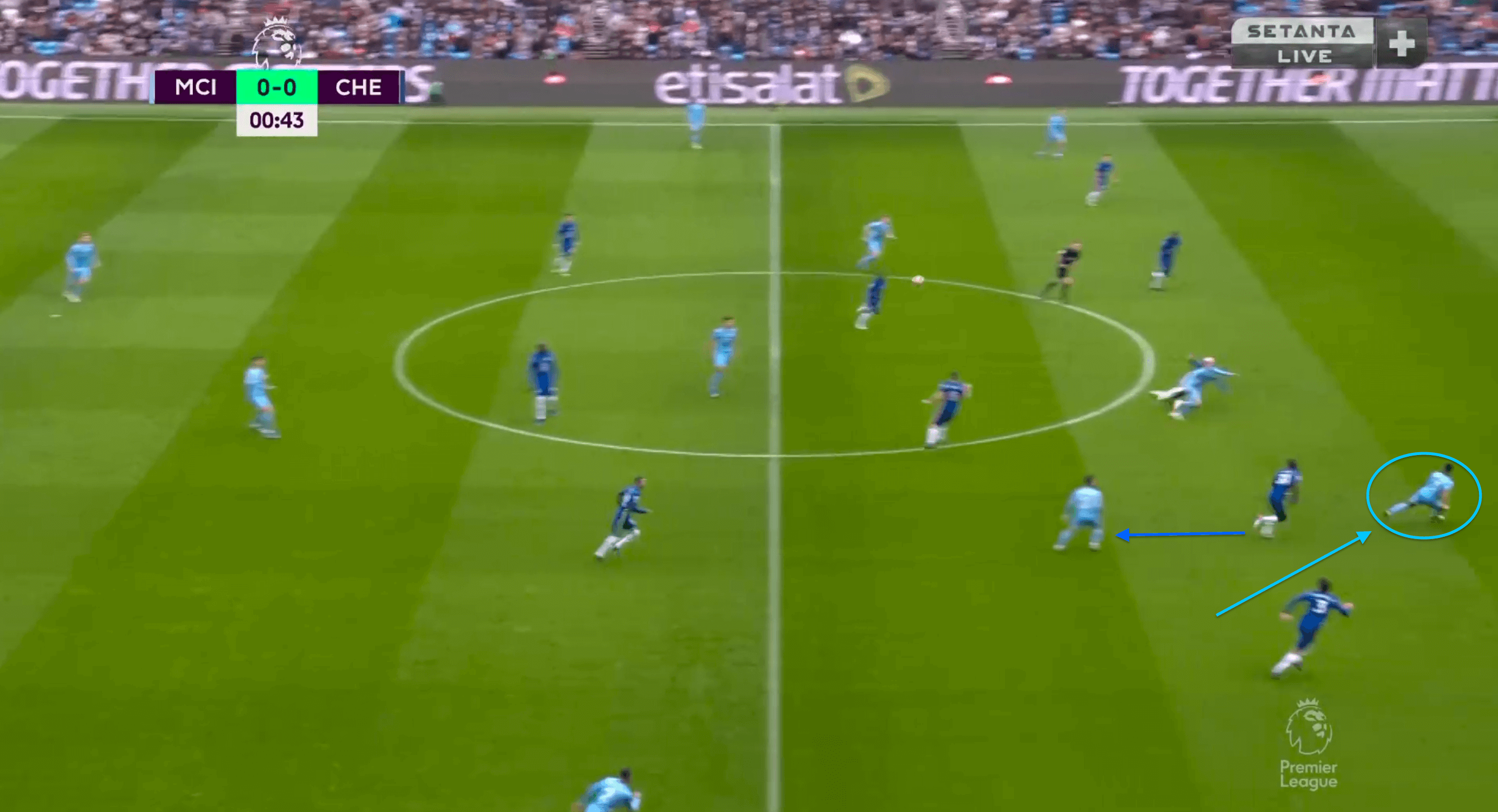 In the image above, we can see how Sterling makes a diagonal run from the wide region and attack the space behind by looking to receive a long ball from Stones. The idea behind this pattern was simple where usually Bernardo Silva would position himself in front of Malang Sarr that would pin and draw the Chelsea centre-back to press him and open space for Sterling to run into. The presence of Walker very wide and not closer to the centre would mean that Alonso would be attracted to him. 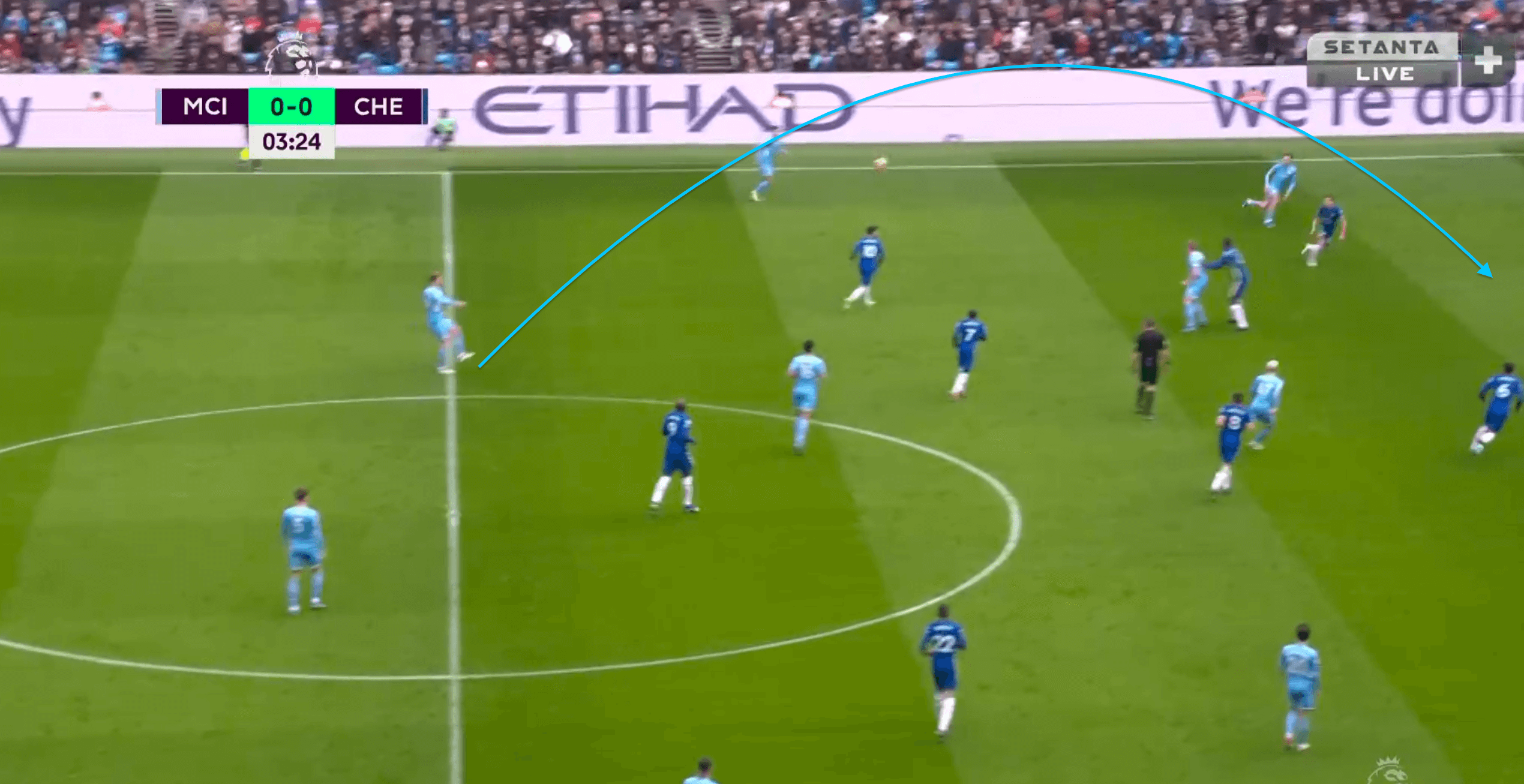 This was also done in the opposite flank where at times KDB would do the job that Silva did and Grealish being the wide winger would make this diagonal run to receive a ball from the centre-backs behind the defence.

City’s idea of double wide spacing is among the best in Europe and combined with the quality and the gravity that their players command, it becomes very difficult for the opposition to deal with it. We can see that in the image below where Cancelo and Grealish stay very wide with the former slightly deeper. When the ball goes to him Azpilicueta has no option but to press him and that opens the space for Grealish and he is unmarked too. Rudiger meanwhile also is in a dilemma as to do what where either he has to stay in his position to keep KDB on track or move to the wing and press Grealish. 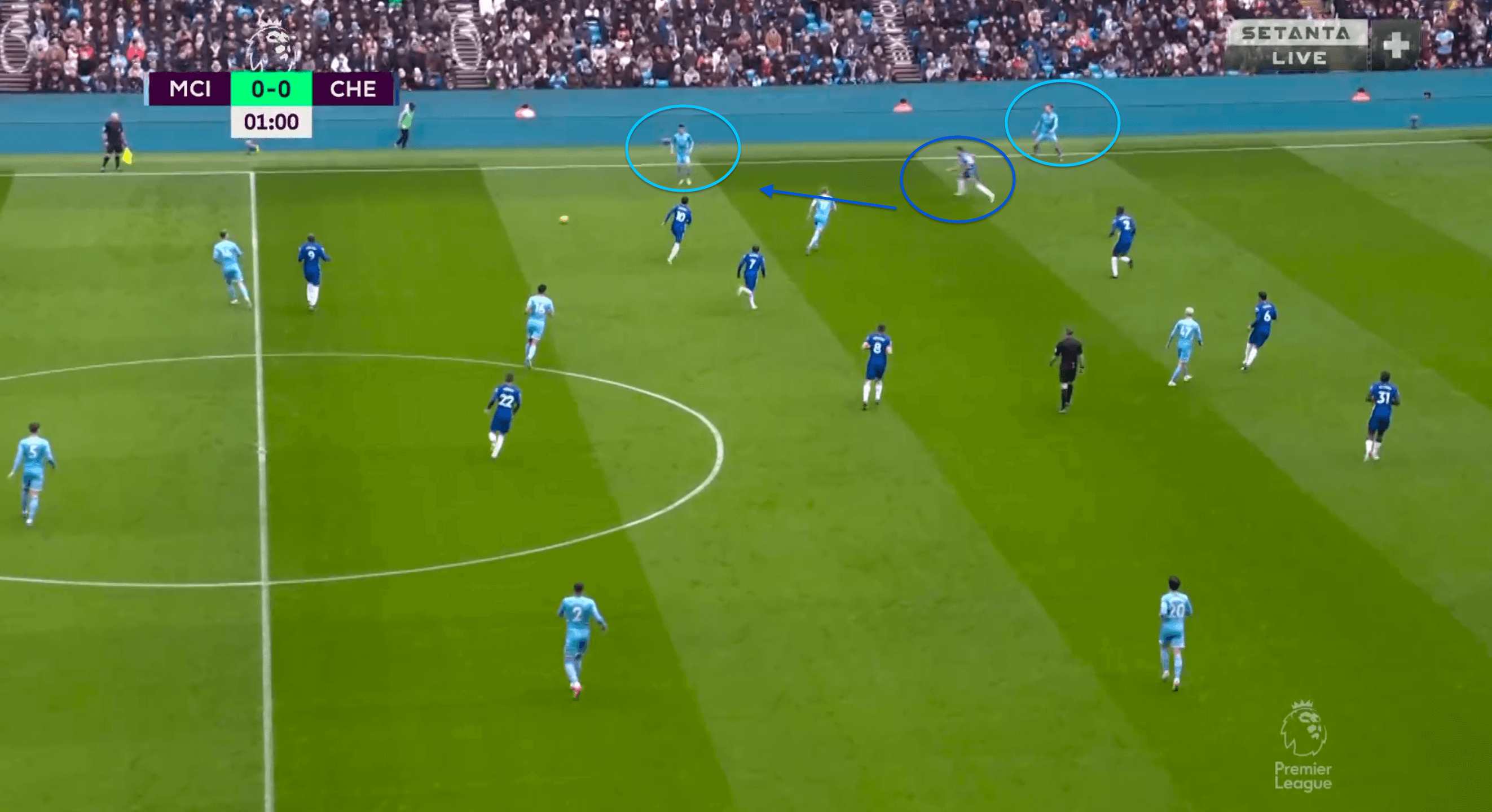 Just when Chelsea looked like they could slowly identify or provide a solution to stop City from doing it, Pep’s men kept churning out more and more by including 3rd man runs as part of their gameplay too. It wasn’t only the wingers that was looking to make runs in behind the defence even the likes of De Bruyne and Silva would make dynamic runs from the deep as a 3rd man and would attack the space in the behind like in the image below. It would be very difficult for the Chelsea defensive midfielders to track the runners. 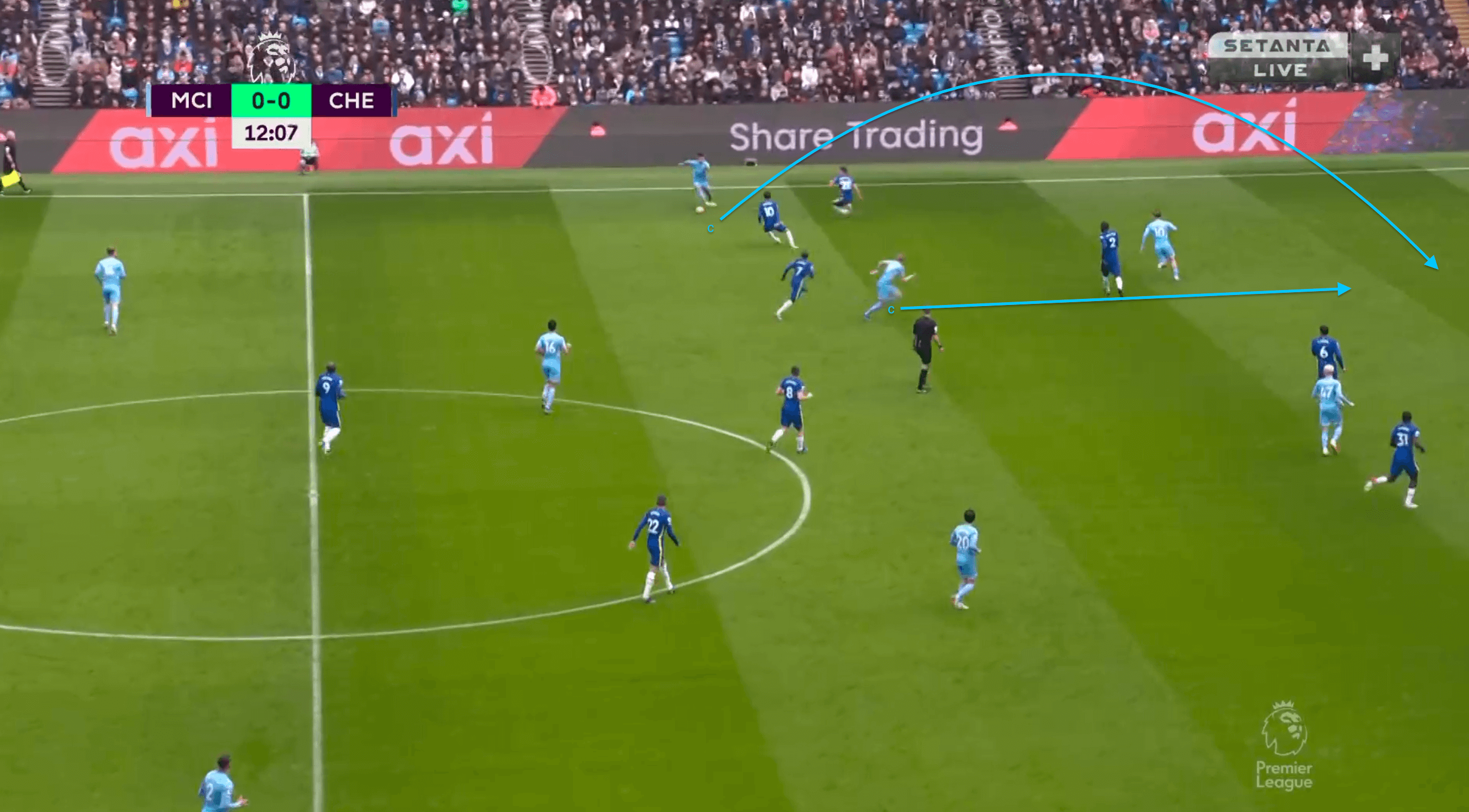 But City despite having solutions or patterns often struggled to execute them with the right precision. This was also evident against Arsenal where they struggled to execute some of the basic plays that they are renowned too. For example, we saw how the wingers were able to make diagonal runs to exploit the spaces behind. But at times, Grealish would often not do this due to his inclination of receiving the ball to his feet.

The former Villa man has made decent strides as an off-ball attacker in his time at the Ethihad but still, he has the thought of showing for a pass by dropping deep and not moving forward. This can be seen in the image below where he moves in the same direction as Azpilicueta (toward Cancelo), asking for a pass. Even if the idea was to play a return one-two with him, the possibility for Azpilicueta to be stable and intercept the ball is more compared to if Grealish had made a run in behind as Rudiger would be far away and would have to step out of his position that would trigger a domino effect of collapse from Chelsea’s defence. 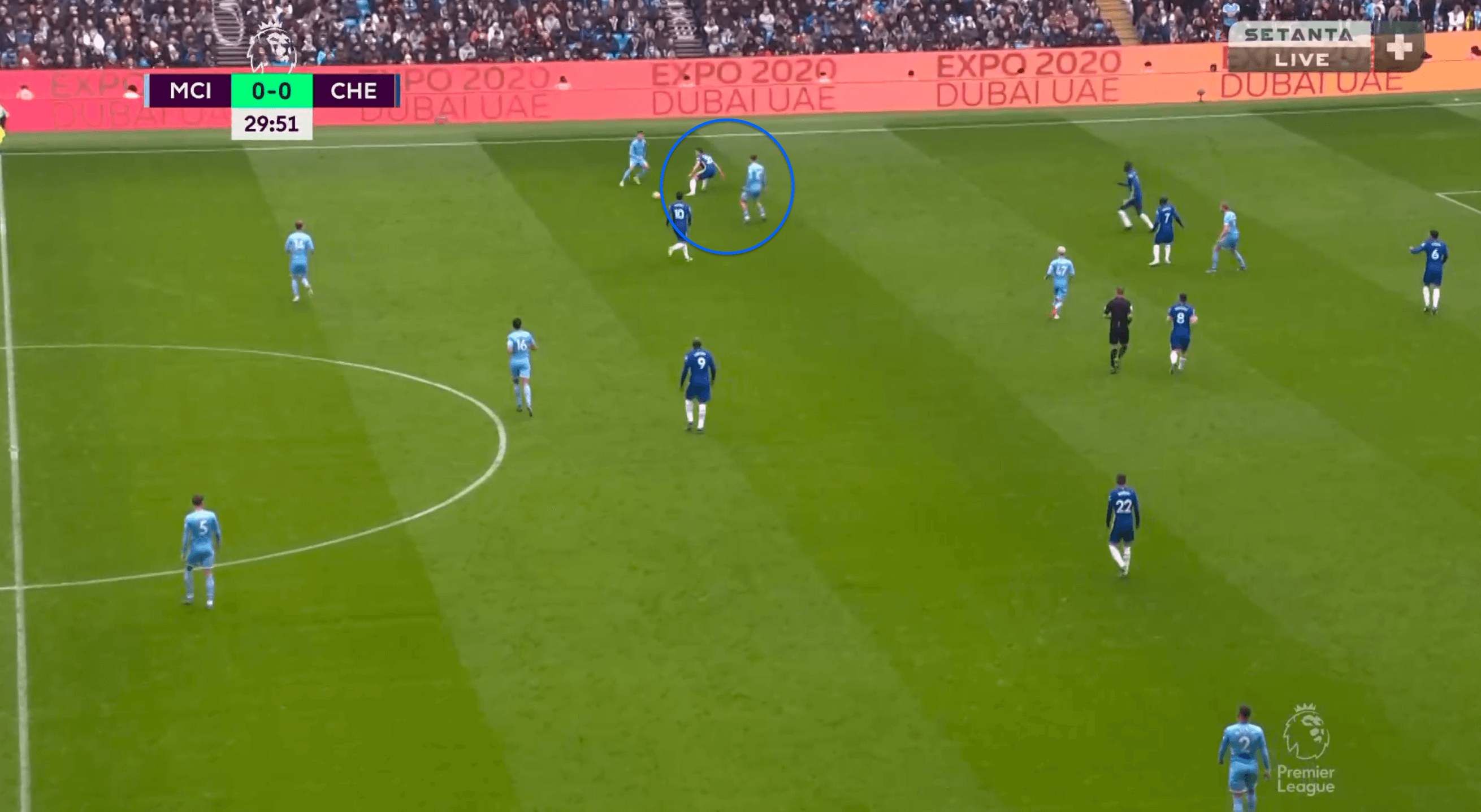 Defensively, City were set out to press higher up the pitch and looked to win the ball from Chelsea as soon as possible. Even during the buildup, Chelsea would look to drop both their defensive pivots deep to aid the process and City would counter it by provisioning two of their midfielders higher up the pitch and blocking Kovacic and Kante from receiving the pass. 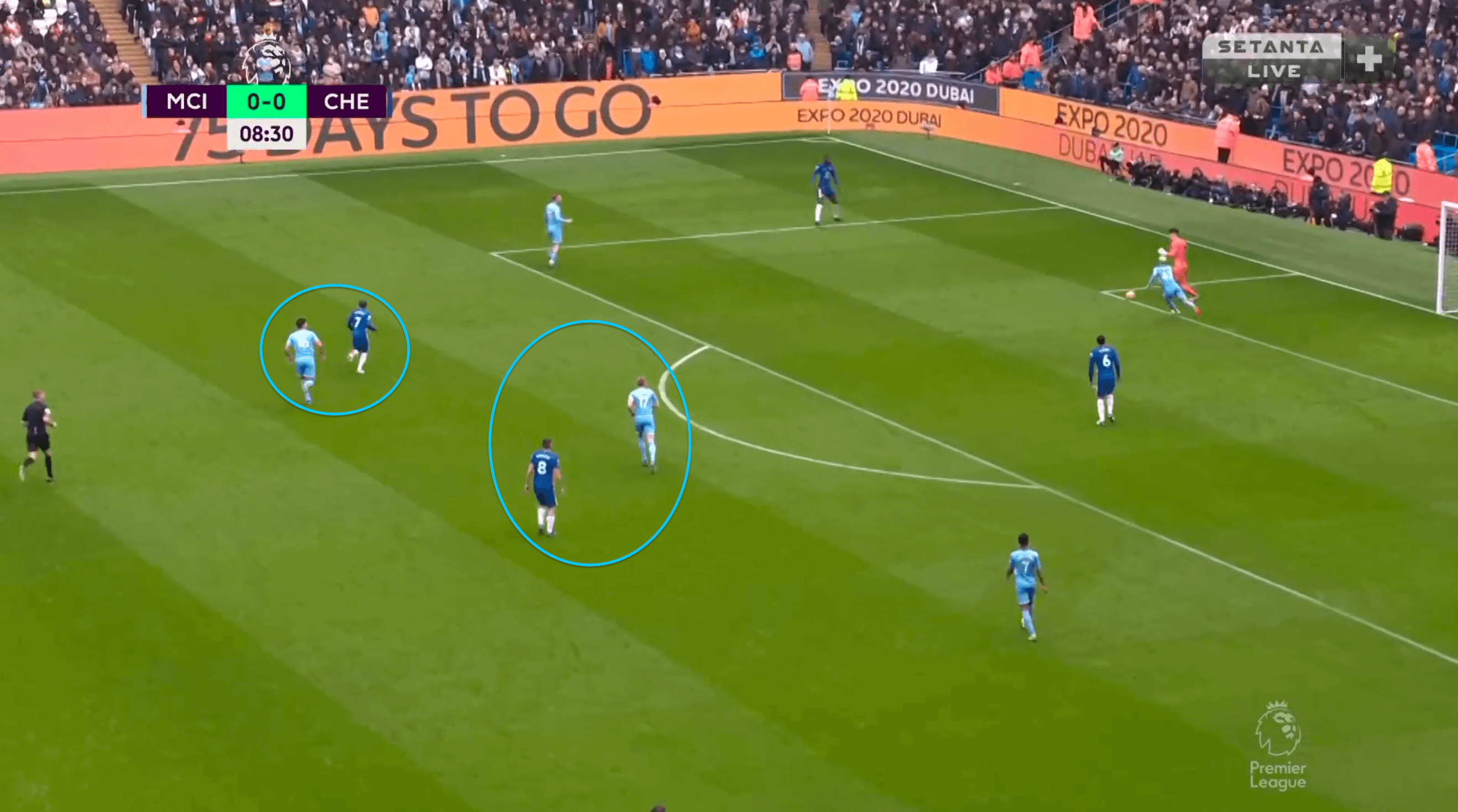 One small change here would be the position of Bernado Silva in the defensive phase where he would usually position more in the same line as Rodri and the shape would resemble more of a 4-2-3-1 with KDB playing as a lone attacking midfielder there. This can be more or less seen in the image below where Silva is slightly deeper and is more oriented to protect the spaces behind than upfront. 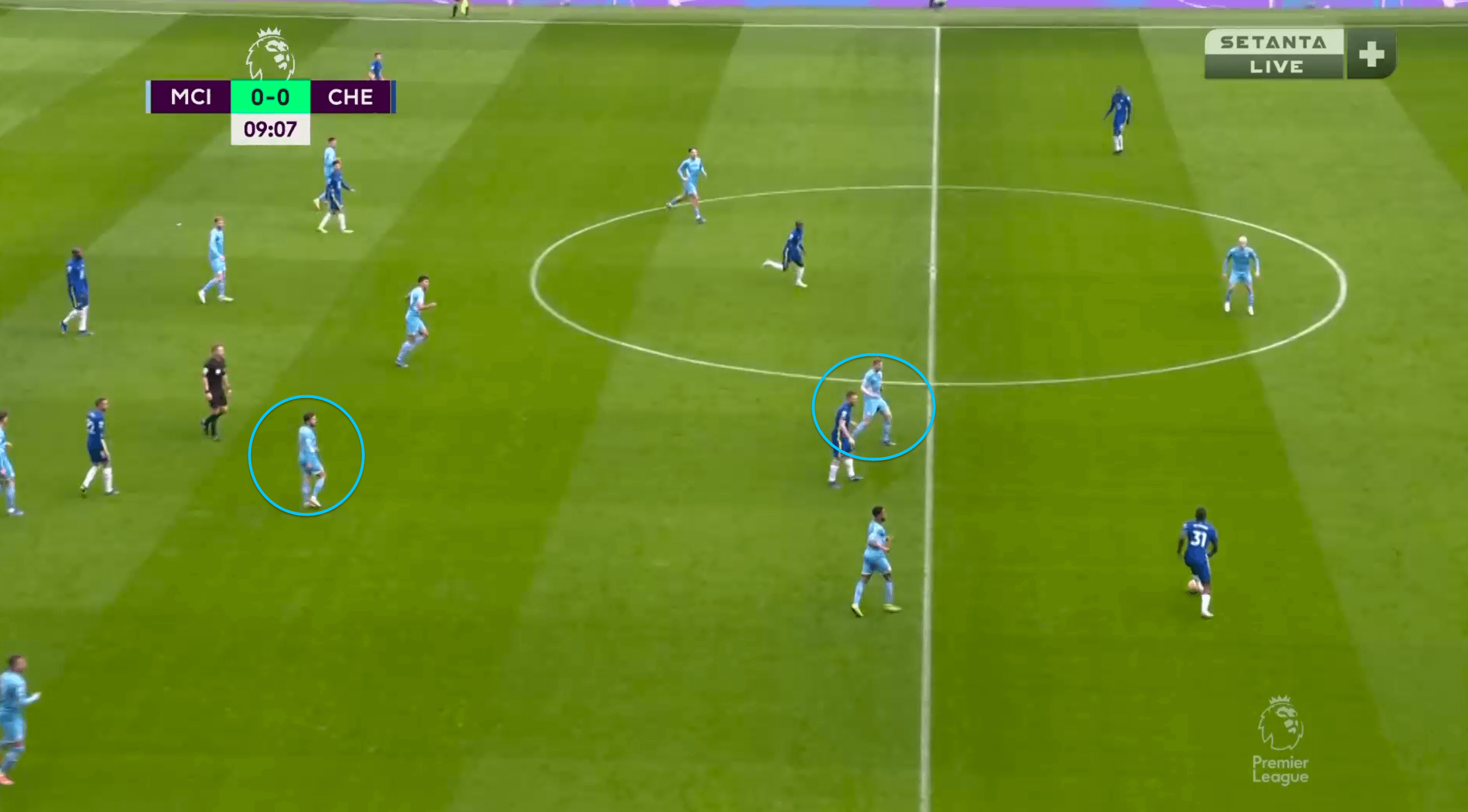 Sometimes this role of Bernardo Silva often caused confusion or communication error among the City players when they press high against Chelsea’s buildup. We can see that City players are looking to strangle Chelsea defenders by man-marking them when the ball is in the flank. At this moment, Silva decides to drop deep and cover space instead of pressing Kovacic that would leave the Croatian being left unmarked and can receive the ball with space ahead of him. 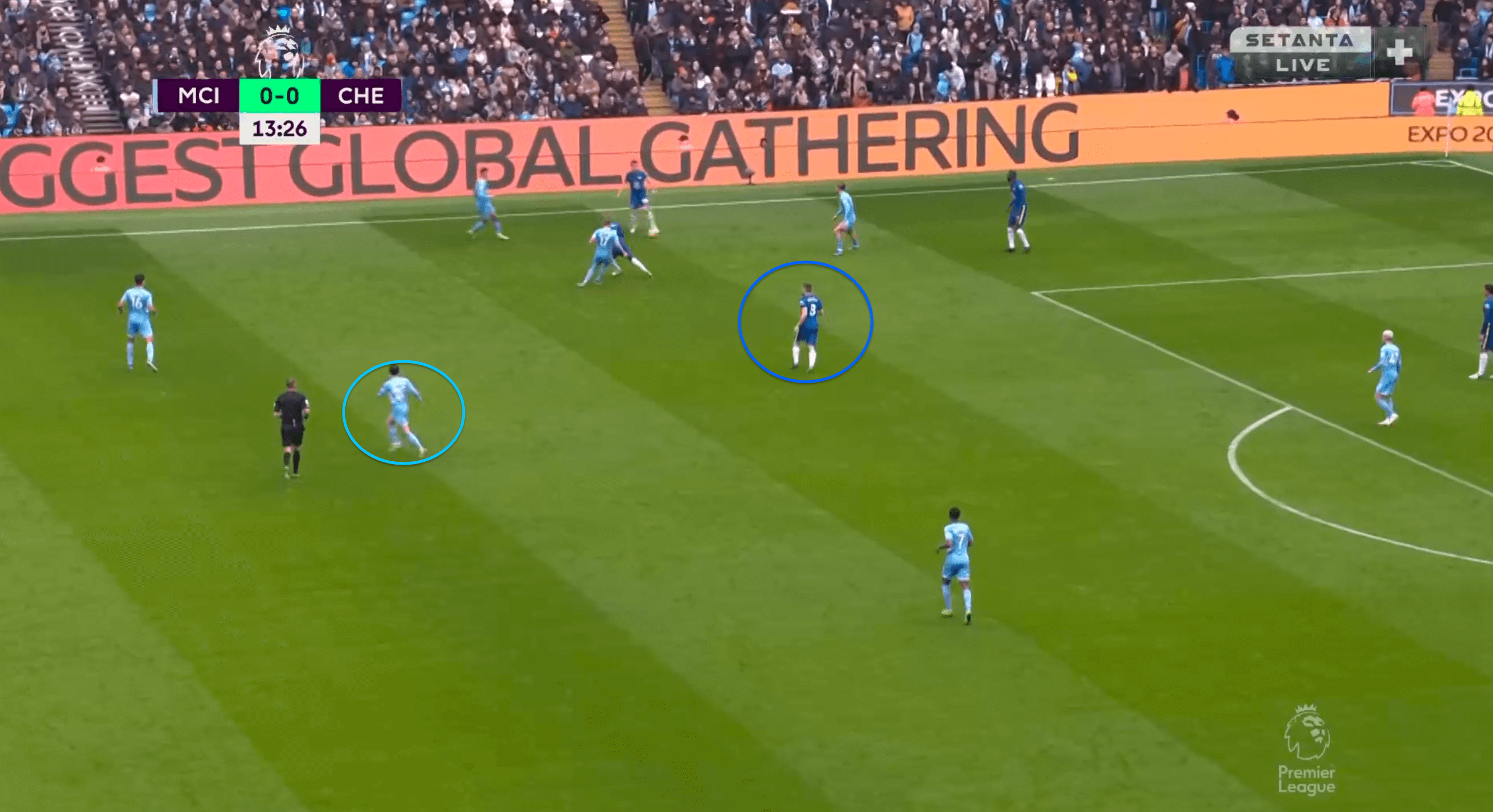 Chelsea’s change in formation and structure

Similar to a lot of clubs, Chelsea have also been affected by injuries and COVID. This had prompted Tuchel to shift his system to a 4-2-2-2 which he had used in both of their games against Tottenham in the EFL cup. But he decided to change it back to a back-3, a 3-4-3, in order to have defensive security against much better opposition.

The principles remained the same as it was when they were using it until the last two weeks where the forwards and midfielders would stay very central and look to block the central passing lanes and penetration. Lukaku being the lone CF would mark or cover-shadow Rodri throughout the game in order to reduce his influence in the game. 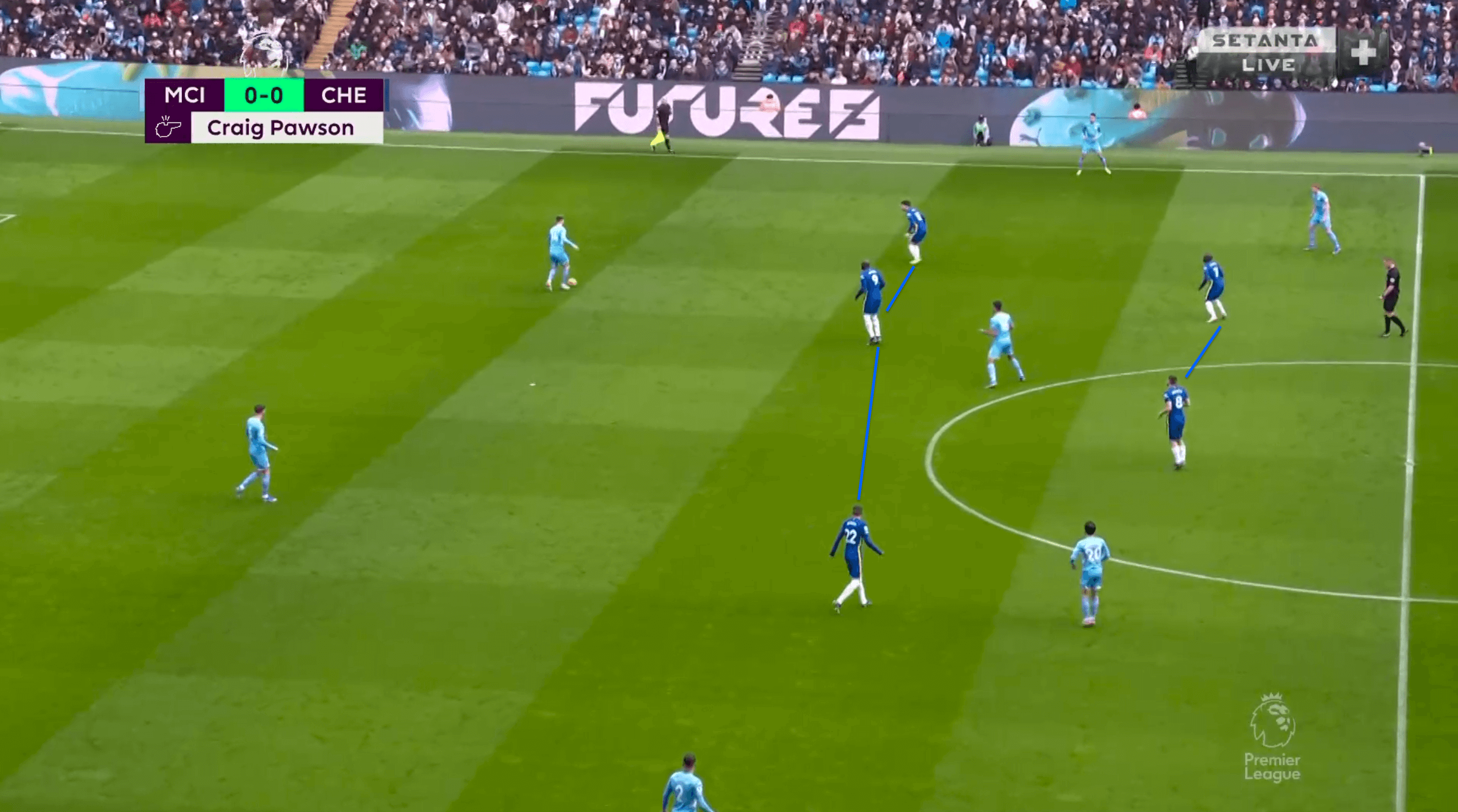 The defensive midfielders would be positioned just behind Rodri and would have the two slightly wider City midfielders beside them. The forwards would block the passing lanes to the City central midfielders instead of covering the full-back which is again to ensure there is central compactness. This forced them to do one thing that is to have their wing-backs press the City full-backs which we saw how that was played through easily by City in the previous section.

One change that Tuchel decided to do here was to shift his defensive system from a 5-2-3 (with the forwards in the same line) to a 5-4-1, with the wingers moving in line with the defensive midfielders. This was done particularly to squeeze the space more and also to ensure that if the ball moves out wide to the full-back the wingers can now press forward to them instead of maintaining them in their cover shadow.

This actually pinned back City slightly where now KDB had to drop back to receive the ball and help City build the play. We can see this in the image below where KDB has dropped deep due to him not being able to receive from any angle due to Pulisic’s deeper position. 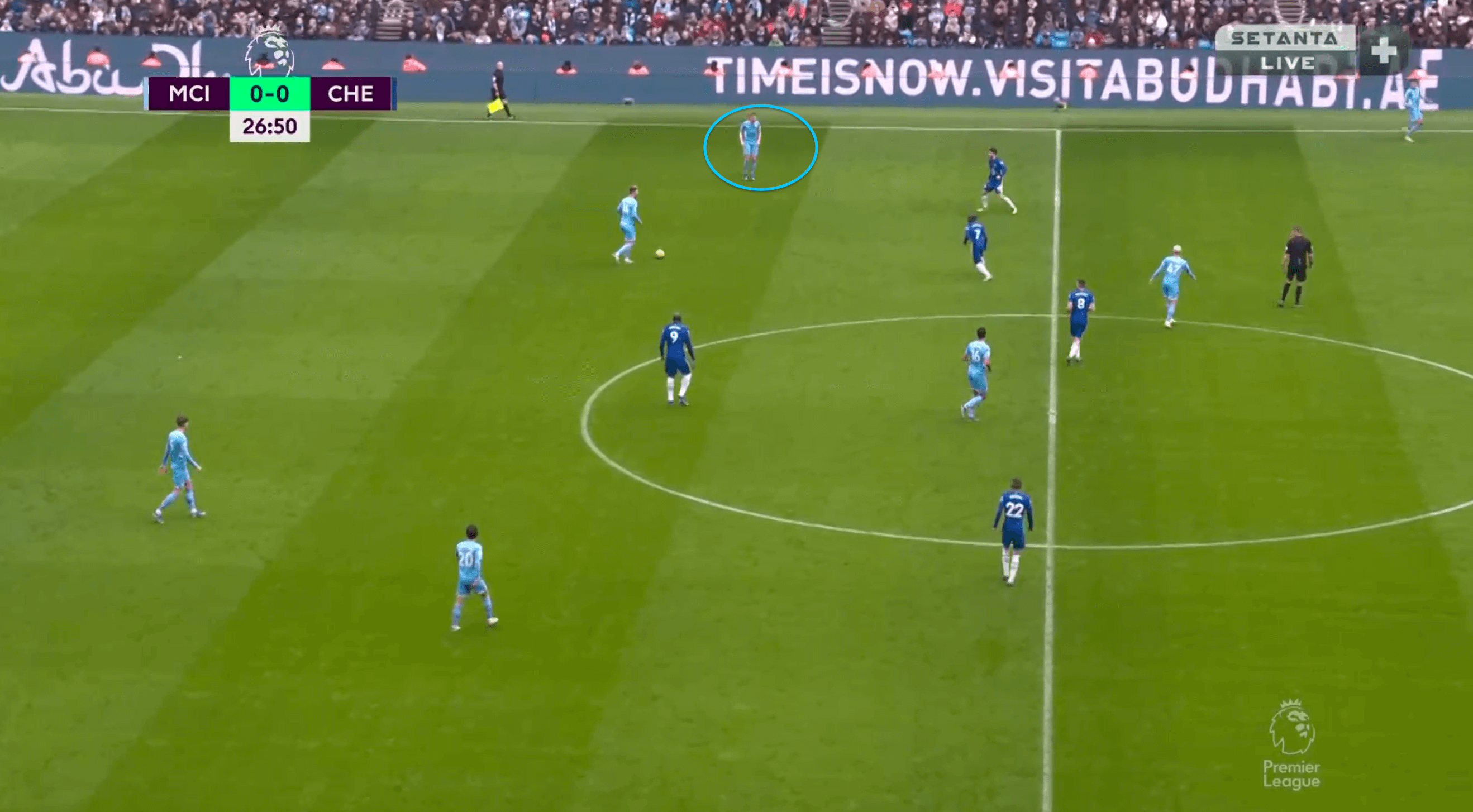 But City had another way to counter his too when they decided to have Foden drop deep more often and receive the ball in space between the two defensive midfielders. This more or less gave City a slight chance to centrally penetrate especially in the second half. 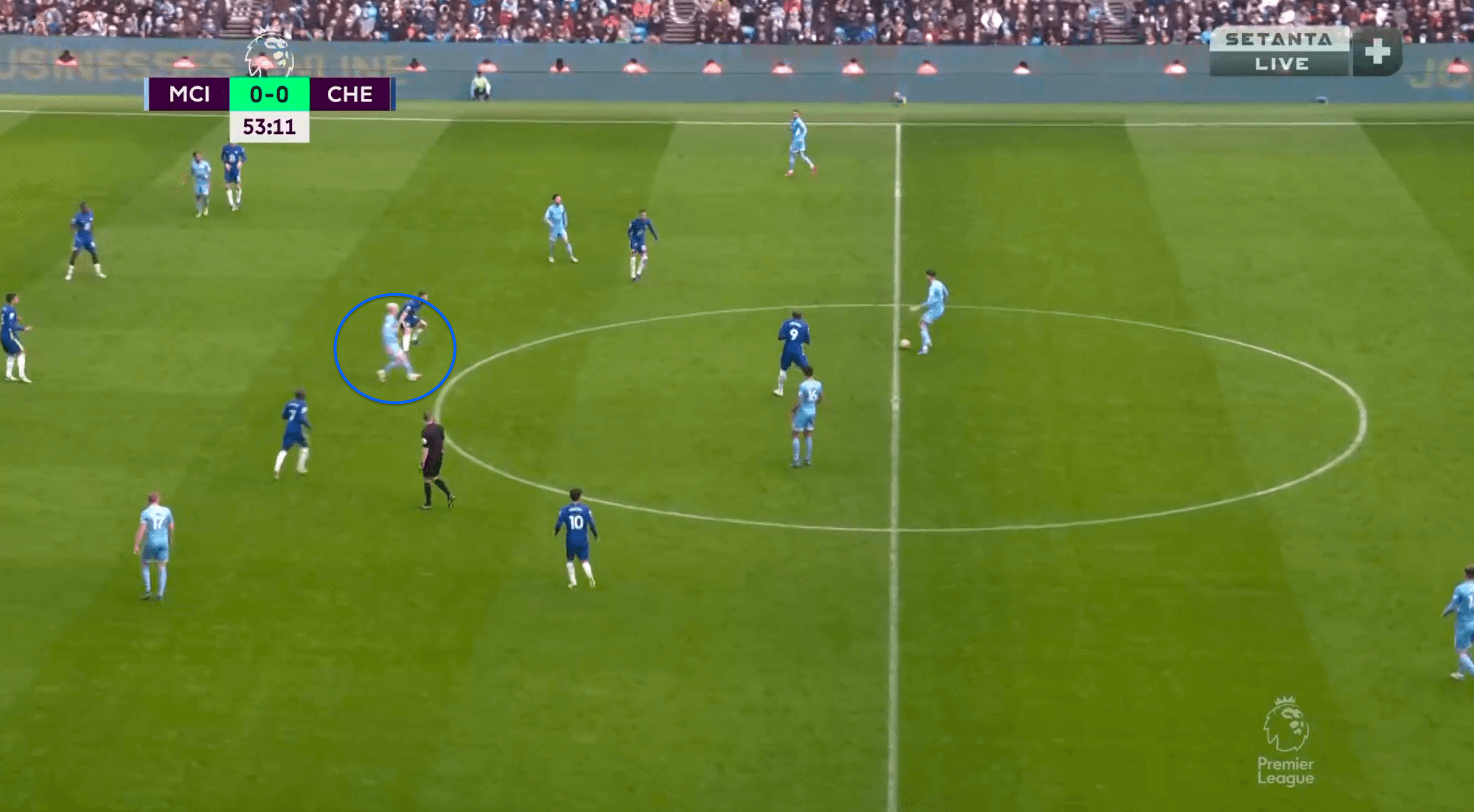 Offensively, the reason for the 3-4-3 was to ensure laterally stretching by the wing-backs without compromising the numbers present for counter-attacks. We can see how Chelsea have overloaded the last line and have their wing-backs very high and wide in these regions. The presence of Chilwell or Reece James instead of Alonso and Azpilicueta could have made much more difference in these situations.

Manchester City once again found a way to win a game despite giving another unconvincing performance by their standards. The immense quality that they possess came forward to help them take all three points through Kevin De Bruyne’s wonder strike. This is almost the final in the coffin with respect to the title race as City have taken 14 points to lead ahead of Chelsea and even if Liverpool win their next two games, they would still trail City by eight points.