Arsenal received a pointless Sheffield United in week 4 of the Premier League. The Gunners defeated Liverpool in the week cup but lost in the relevant meeting last weekend against the reigning champions. The Blades arrived at this game without any goal scored throughout the first three weeks.

This tactical analysis will cover how Chris Wilder’s defensive tactics kept Arsenal out of the penalty box for the first half. This analysis will also explain how Mikel Arteta shifted its tactics for the second half to get the three points. Finally, we will delve into which were those reasons that keep holding the Blades with just a few scoring opportunities, ending the game with a 0.31 xG. 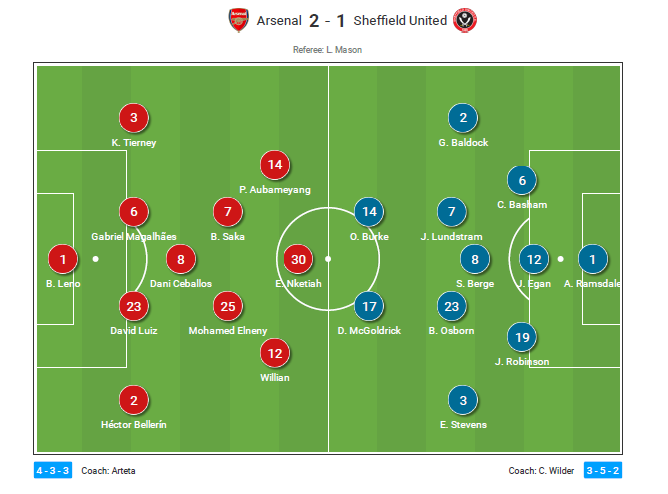 Mikel Arteta selected a 4-3-3 formation, starting his new signing Gabriel Magalhães pairing David Luiz at the back. Dani Ceballos replaced Granit Xhaka, sharing the midfield with Mohamed Elneny. After being selected for the first time for the England national team, Bukayo Saka started as the left midfielder. Eddie Nketiah began as the central attacker in between Pierre-Emerick Aubameyang and Willian.

Chris Wilder choose to start with his trademark 3-5-2 formation, with John Egan returning after the game suspension. That was the only change from the last defeat against Leeds United, keeping the same five midfield players. Jack Robinson and Chris Basham as wing-backs played more in the defensive line than as wingers. Finally, he repeated the front two with David McGoldrick and Oliver Burke

Wilder’s defense philosophy was effective in the Premier League when out of possession, becoming one of the best defensive teams last season. Blades’ style bases its defensive phase in two major factors: the high pressing and the compact low-block. We will start analyzing their high pressing in this game, ending the first half with a PPDA of 8.0. The Gunners’ centre-backs positioned wide in their build-up, with Dani Ceballos dropping deep. Héctor Bellerín and Kieran Tierney took higher positions joining the advanced midfield line creating a 2-1-4 shape.

The Blades counter the Gunners build-up pressing with two lines in a 3-2 structure, as shown in the next snapshot. The first line of pressing involved the pair of strikers receiving support from the midfield line. With the first line forcing the ball to one side, they created a 4v4 isolating the weak-side players. One of the strikers forced the keeper to play wide and blocked the return pass with its curved run. The ball arriving at the centre-back was the pressing trigger. The other striker press the centre-back, and the second line of press man-marked the forward options. 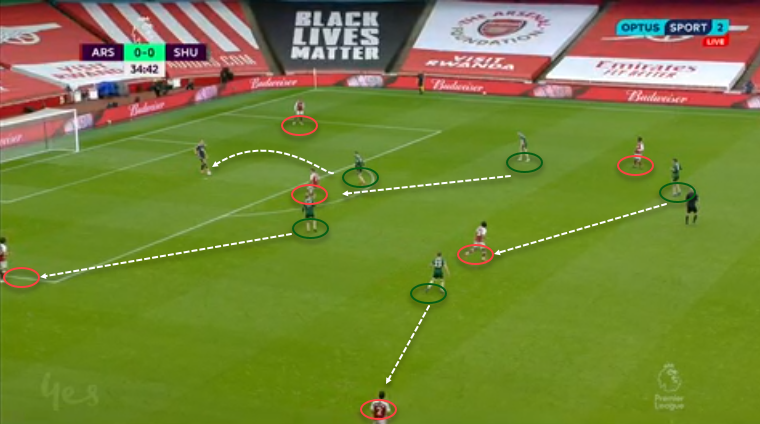 The Gunners dominated the ball’s possession for the first half with a tally of 71%. Albeit, the Blades did not allow any chances due to their compact-low block, keeping the Gunners with a 0.28 xG in the first half. Arteta’s team also shift their shape when in possession in the middle third. Elneny dropped on the right side, creating a back three with Gabriel and Luiz. Tierney and Bellerín gave width in a higher position. Willian dropped in, keeping Aubameyang and Nketiah holding the front line in a 3-3-2-2.

The Blades sit back in a 5-3-2 block, as depicted in the next shot. We can see the team’s horizontal compactness with all the players within the central channel and the half-spaces. The defensive structure worked perfectly in the first half, not allowing any space. Gunner’s players were man-marked inside the defensive system, only allowing passes in the structure’s periphery. This strategy allowed the Gunners to play the ball laterally without any progressive action. 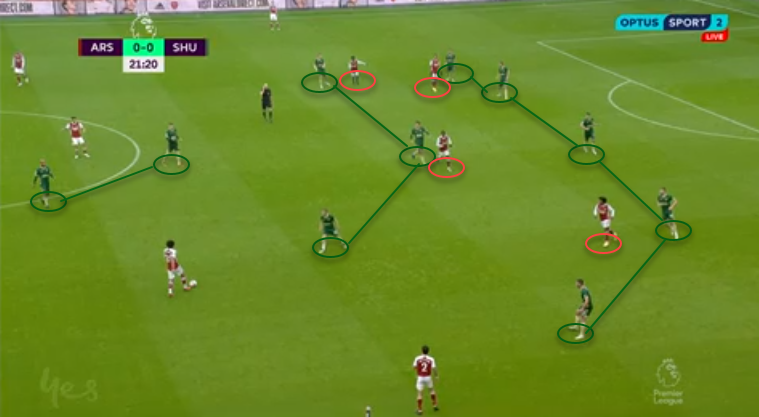 The Blades’ defensive structure was proactive, using different strategies depending on which side where the Gunners progressing the ball. We saw from the last picture when Elneny had the ball; Ben Osborn was ready to press him. Albeit, Gabriel was allowed to advance the ball on the left flank, as shown in the next shot. The Blades pressed Elneny due to his attributes of placing through balls, giving time to Gabriel. Simultaneously, this created a narrower internal structure on the right side, giving even less space to Gunners’ best player Aubameyang. Wilder’s defensive philosophy consists of using the correct strategies to reduce the rival’s strengths. 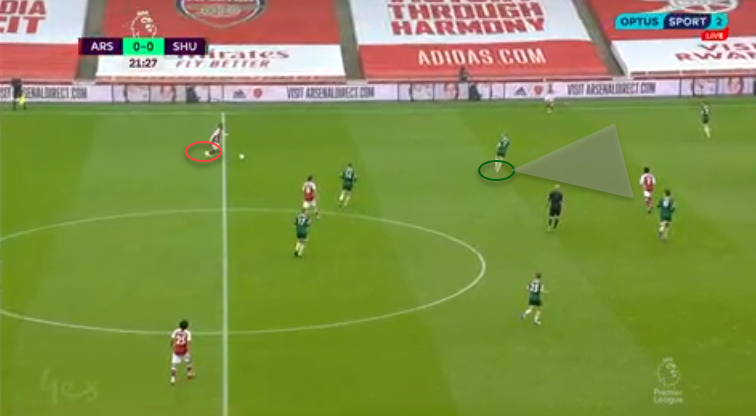 As we mentioned before, the Blades did not allow space between the lines due to their inside man-marking. The Gunners braked this structure with a shift in their attacking tactics. Elneny was for the first time involved in the attacking phase. He did a progressive run to collect the ball inside the defensive structure. He was unmarked and created the necessary chaos in the Blades block. The Gunners used a player whose role was covering in the rest-defense. The creativity in Arteta’s tactics in the second half gave them the first scoring opportunity, being ruthless to score on their first chance. 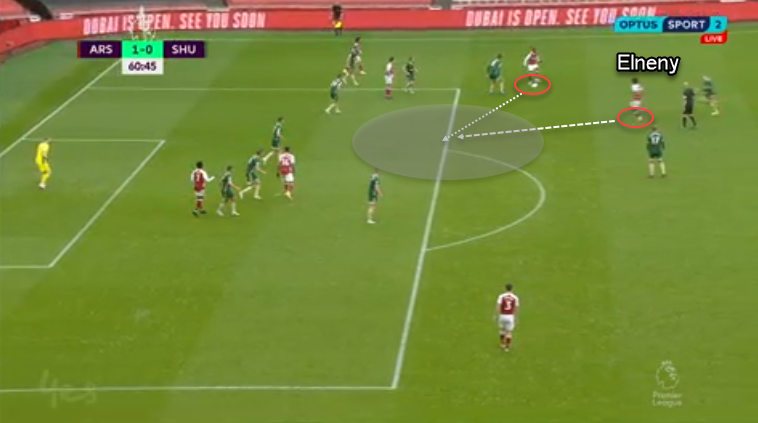 In the second half, we also saw the manager’s ability to read the game and shift the structure. Arteta brought Nicolas Pépé to play in the right flank in Nketiah’s position. Aubameyang took the central position with Willian moving to the left. This shift, added to their tactical rotations, gave Arsenal a higher dominance of the game. One of those tactical rotations was between Willian and Saka in their build-up. With the Brazilian now playing on the left, they inverted their positions with the wing’s Englishman. In this rotation, Saka stayed higher, and the Brazilian dropped into the midfield, creating a central overload. Willian was not followed in this rotation, as shown next. 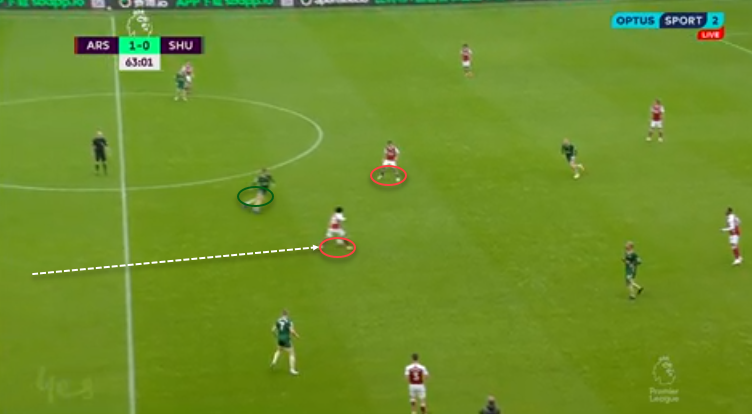 Another tactical rotation allowed the gunners to stretch the score to two goals. On the right, Pépé took a wider position with now Tierney playing as an inverted fullback tucking in. Elneny progressing the ball in the middle third created a 3v2 as the left mid pressed him. The right-back was unmarked due to Pépé’s rotation, allowing him to receive behind the press’s second line. In this play, the three Gunners players combined with the substitute collecting the ball behind the defensive line to score. 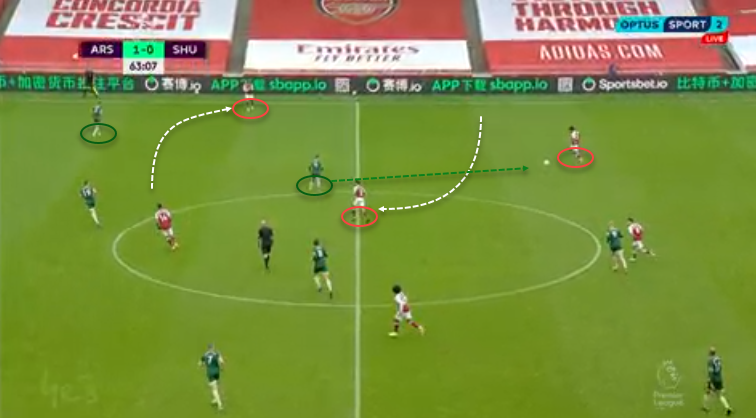 Even though the Blades were effective sitting in a compact low-block in their half, this tactic left the team in a weak shape to create scoring opportunities. Next, we can see how they tried to counter-attack throughout the game. Burke stayed high, looking for a deep pass to counter. Gabriel and Luiz remained close, forcing him to make wide runs in the transitions. The support given to the fast runner was deficient, as we see in the picture. The other Blade’s striker ran behind two recovering Gunners players, and just one more midfield player made a ran to support, from behind. 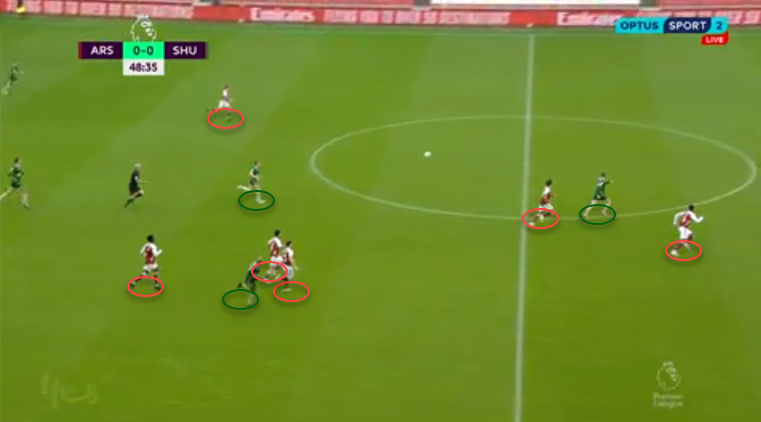 When out of possession, Arteta’s defensive tactics also reduced the Blades’ opportunities to score. When defending, they positioned in a low 5-3-1. Saka withdraws as a fifth defender, and Aubameyang and Willian sat back next to Ceballos and Elneny. Against this structure, we saw a lack of ideas to create any chances on goal. The Blades’ lack of movement off the ball and rotations made their attacks predictable, facilitating the Gunners’ job to defend organized. 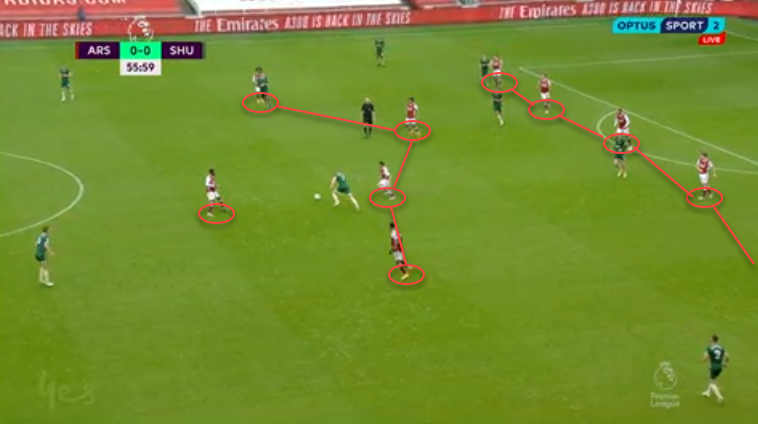 Few were the cases in which the Blades could keep the ball’s possession in the final third. When promoted to the Premier League, this team call attention with the back three’s involvement in the last third. We only saw a couple of opportunities in which this happened. The next picture depicts one occasion they created an overload in the flanks due to the wide-back participation in the final third. With Robinson and Chris Basham more focused on defensive duties, they were not involved in their attacking phase, reducing last season’s strengths. Considering the lack of defensive attributes of Gunners’ players used in the flanks, the Blades could have taken advantage of these attacks from the sides. 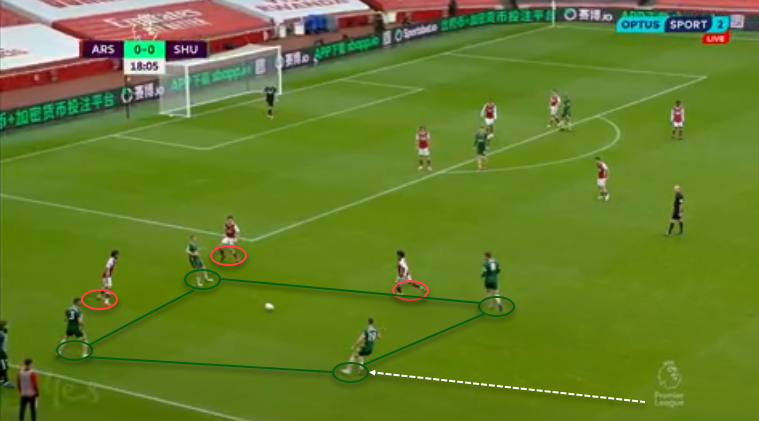 Many Premier League teams defend in a low-block with five at the back in a compact block. To break these defenses, teams should be creative, adopting different tactics within the game. Chris Wilder’s tactics succeed in the first half, albeit the Gunners’ tactical shifts broke the defensive block.

Again, this game showed Arteta’s prowess to read the game and make the necessary tweaks to break the opposite structure. The Blades need to improve the support given in their counter-attacks if they want to succeed in playing a transitional style. They should play a more positional style to progress through the thirds compactly and arrive at the final third with numerical superiority.