At the start of this season, we saw Chelsea and Liverpool face-off in the European Super Cup as winners of last seasons Europa League and Champions League respectively. That tie was eventually settled by a penalty shoot-out following a 2-2 draw as neither side found their rhythm. The feeling going into this Premier League match was that this would not be the case again. Liverpool, under their German coach Jurgen Klopp, have a 100% record domestically but fell 2-0 away to Napoli in the Champions League. Chelsea, on the other hand, have had a difficult start to the season with wins hard to come by. To this point, their new coach, club legend Frank Lampard, is still enjoying the full support of their passionate fanbase. This is more than likely as much to do with his stature at the club and his willingness to trust home-grown players as anything else though.

In this tactical analysis, we will examine the key tactical points that led to a 2-1 victory for an impressive Liverpool side. 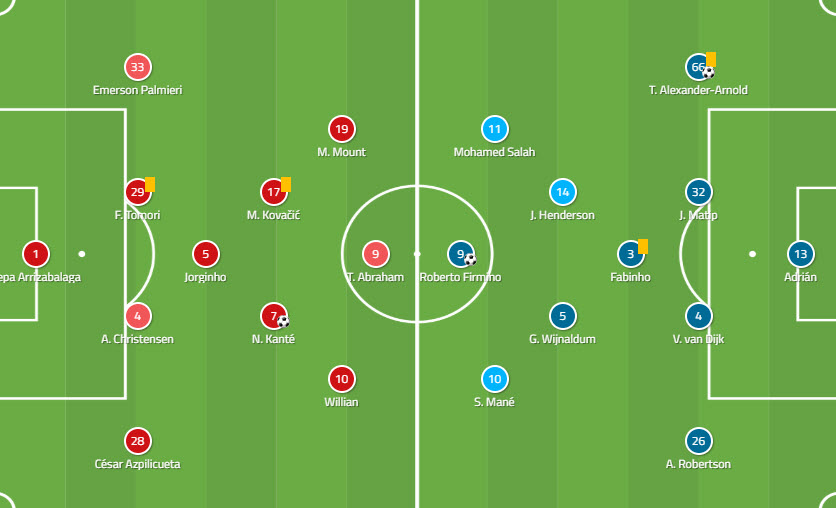 Starting with the home side it was evident that Lampard was set to continue his trust in young and home-grown players. While the presence of Tammy Abraham and Mason Mount in the attacking third is relatively unsurprising but in recent weeks we have also seen considerable first-team minutes given to Fikayo Tomori, who was on loan at Derby County last season under Lampard.

With Willian and Mount playing in the wide forward positions it remained to be seen how Chelsea would look to generate width in the attacking phase. 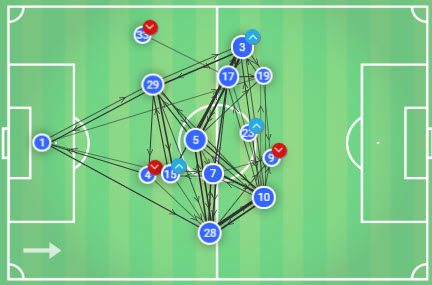 The Chelsea pass map further backs up this point. Willian and Mount both took up positions in the half-spaces for the majority of the match with Mount, in particular, taking up similar positions to that of Mateo Kovacic on that side of the field. This slowed down the ball progression time and time again for Chelsea.

We also see that the fullbacks, Marcos Alonso and Cesar Azpilicueta, struggled to provide any width as they had to contend with the threat of the Liverpool wide players in transition.

For Liverpool, the biggest selection issue would, as ever, surround the configuration of the midfield. In this match, Fabinho was again selected as the 6 with Jordan Henderson and Giorginio Wijnaldum positioned ahead of him. 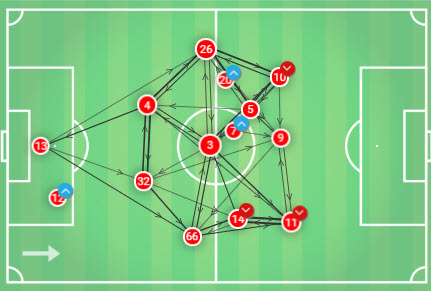 The pass map for Liverpool is interesting because it firmly showcases the importance of Fabinho in this Liverpool side. He acts as the fulcrum through which the play flows for his side as well as being a key component in the defensive phase. The Chain on the right side is interesting as it shows Trent Alexander-Arnold, Jordan Henderson and Mohamed Salah all occupying a similar channel at times. This shows the interchanging nature of the Liverpool attack down that side.

Jurgen Klopp cut his teeth in coaching at Mainz 05 but he rose to prominence during his period in charge of Borussia Dortmund. In that time the term gegenpressing or counter-pressing rose to prominence with Dortmund at the centre of that. When Klopp agreed to take charge of Liverpool there was an expectation amongst the British press that the German coach would look to transfer this style of play when out of possession directly across to Merseyside.

Instead, we have seen a more nuanced approach from Liverpool when out of possession. There are, of course, times in which the pressing is aggressive and high as they look to disrupt the ball progression of the opposition. This high press is balanced somewhat by situational pressing when traps will be sent to allow the opposition to progress to a certain point before the press is triggered.

In this match, we saw an interesting approach from Liverpool with the two ‘8’s in Henderson and Wijnaldum dropping deeper out of possession and allowing Fabinho to progress from a deeper starting position to press the ball aggressively. 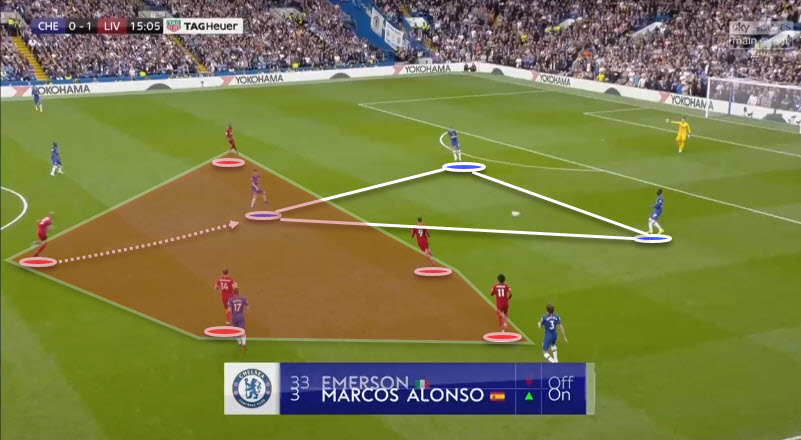 These movements from Fabinho, who is the best pressing midfielder that Liverpool had on the field, were designed to prevent the Italian international Jorginho from having time and space in which to dictate the play. The front three for Liverpool did not engage Chelsea immediately and instead waited for the ball to be played into the first midfielder or out to the fullbacks. They then moved to press and cut off passing lanes to allow the ball to be retained and played backwards.

This pressing structure was intended to force Chelsea to play longer passes out from the back into the spaces occupied by Henderson and Wijnaldum as they dropped into deeper areas. 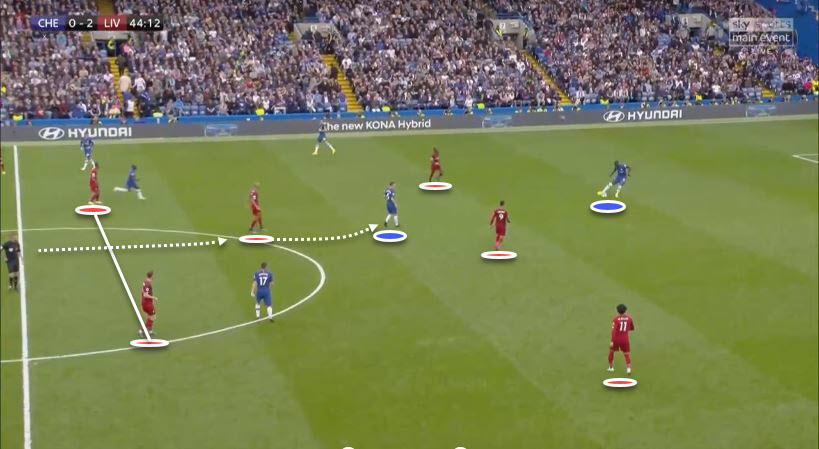 We see a similar moment here as Jorginho shows to take possession from his central defender. Sadi oMane, Mohamed Salah and Roberto Firmino are all positioned between the ball and Jorginho but they make no move to press the ball in the first instance. Instead, they are waiting for the ball to be played to midfielder before they press and close down passing lanes that may be open to allow the ball to progress. Fabinho has, once again, read the danger and started stepping out to put pressure on the midfielder as he receives the ball.

This was a constant from the Brazilian throughout the match as he displays not only the ability to press from distance but the understanding of when and how to do so.

This season has seen a shift from Liverpool, tactically speaking, towards a model that allows them to control matches more efficiently. This has seen different roles given to the two fullbacks. Last season left-back, Andy Robertson, and right-back, Trent Alexander-Arnold operated almost as wingers in the attacking phase. This season saw a change, especially on the right-hand side, with the fullbacks retaining a deeper line and in the case of Alexander-Arnold sitting narrow in an inverted position on the same line as the midfielders.

This inverted movement allows Liverpool greater control in the possession phase. In this match, we saw the fullbacks maintain deeper wide positions but this was an attacking function as much as it was a defensive one. 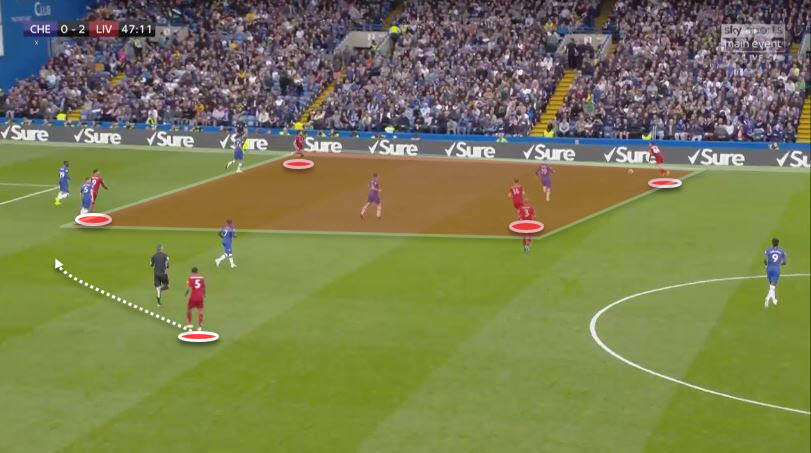 With the fullbacks sitting deeper we saw a more structured approach with the wide forwards and ‘8’s on that side retaining their shape. This was effective in dragging the Chelsea defensive block across towards the ball. This, in turn, created space in the centre or on the far side which Liverpool would then look to access through quick switches of play from one side to the other or into the centre. 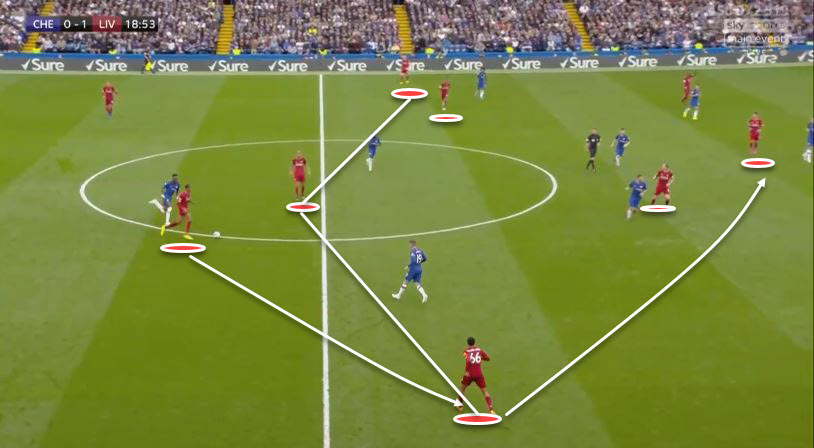 We see this structure clearly in the example above as Liverpool look to progress the ball into the Chelsea half of the field. The two fullbacks or on a line slightly ahead of Fabinho who is the deepest midfielder. This structure gives Joel Matip two clear options with which to progress the ball. In this instance, he plays it out to Alexander-Arnold who in turn drives the ball centrally into Roberto Firmino.

These deeper positions were also intended to counter against the threat of Chelsea using their fullbacks in transition to provide attacking width. The two fullbacks for Chelsea would look to move forward and be met with the Liverpool fullbacks. This allowed the two wide forwards for Liverpool to stay high out of possession in order to allow Liverpool to transition effectively.

With Chelsea utilising a 4-3-3 with no established wingers the fear was always that they would struggle to gain effective width in the attacking phase. This was further complicated by the positioning fo the Liverpool fullbacks as discussed above. We saw Chelsea narrow their attacking focus throughout the match as Mason Mount and Willian moved into positions close to Tammy Abraham. Mateo Kovacic and Ngolo Kante also moved into these areas as the Chelsea attack became more and more congested. 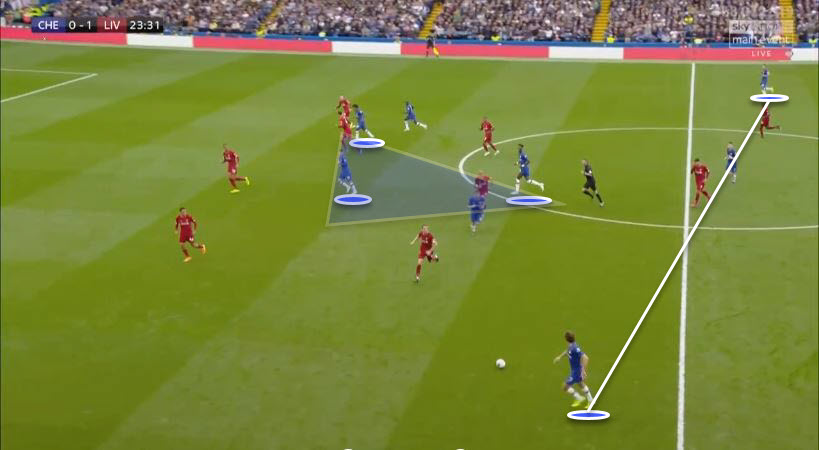 We see this here with the attacking unit for Chelsea all positioned in a narrow group in the centre. This positioning and the inability of the Chelsea fullbacks to really get into advanced areas meant that Liverpool were able to comfortably retain a compact block in their defensive phase. In their inability to access the wide areas a lot of passes from Chelsea into the final third were forced and failed to allow the ball to progress towards the Liverpool penalty area. 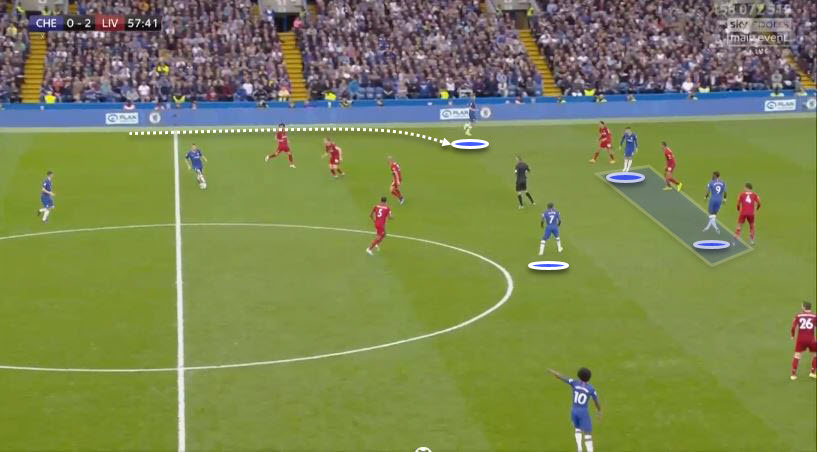 This time the fullback on the left side has managed to access some space and once again Mount has emptied that wide space and moved into the same area as Abraham. Once again though the ball progression was too slow and any chance that they had of accessing that wide space was lost. You can even see Willian motioning for the ball to be played back instead of looking to accept possession.

In the end, the 2-1 result was probably fair. Chelsea are aggrieved to have had a goal disallowed by VAR and that was most likely amplified by the fact that Liverpool then scored their second not long after. Chelsea are still very much a work in progress from a tactical standpoint. There is a real sense that we still do not fully understand the game model that Lampard is trying to implement.

That lack of a playing style and identity was more vivid given the fact that they were facing a team with a clearly defined way of playing.