Norway Women are actually in their final phase of preparations for UEFA Women’s Euro 2022 which will begin very soon and they organised a friendly match against New Zealand last Saturday as part of these preparations. The match ended with a 2-0 win for Norway and it was a great opportunity for the players and the head coach to ensure that the chemistry is still there as well as to work on improving the positioning and the way the team approaches games.

In fact, the side’s performance had numerous positives and was a satisfying one in terms of result and the overall display. Yet, the team made some tactical mistakes that will need to be fixed very soon ahead of the kick-off of the tournament.

In this tactical analysis article, we will be mainly exploring Norway’s tactics and analysing their performance both from an attacking and a defensive perspective to assess their readiness for the tournament.

On the other side, New Zealand were lined-up in a 4-4-2 formation as well with Victoria Esson as a goalkeeper, Meikayla Moore, Rebekah Stott, Claudia Bunge and Elizabeth Anton in defence, Betsy Hassett and Annalie Longo as central midfielders, Olivia Chance and Katie Bowen as wingers with Hannah Wilkinson and Paige Satchell in attack. 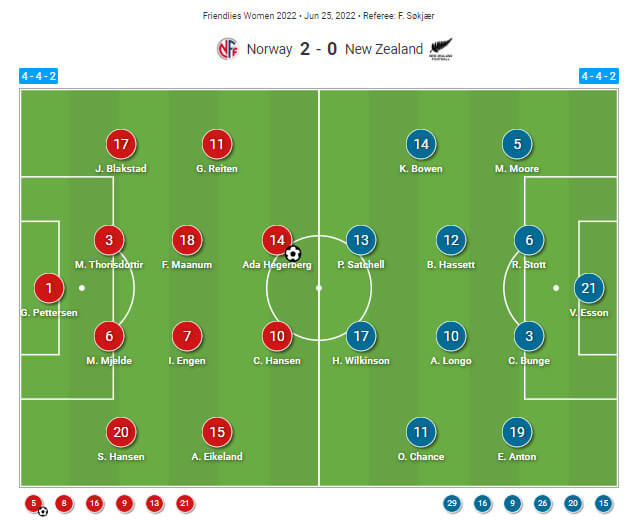 The team relied on Hansen and Hegerberg’s skills a lot when in possession and made sure that wingers and midfielders get closer to them in attack in order to provide passing options and create combinations to free one of the two attacking players. Hansen’s creativity is fundamental to this team and must be exploited even further since it can bring a lot of danger to any opposing team. Such as this example shows, she was able to give a key pass to her teammate using a back heel in a surprising way for her opponents, finishing a triangular passing combination in a great way and allowing the receiver to find a lot of free space. 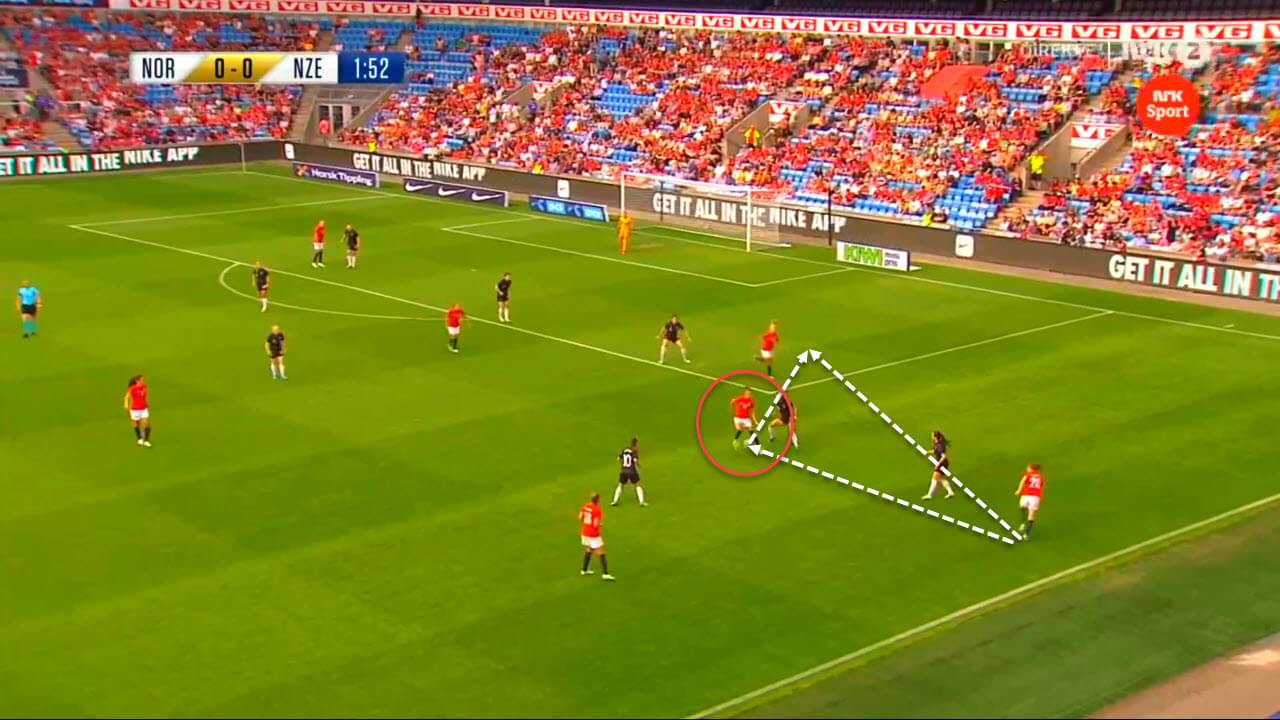 Moreover, Hansen is instructed to play more centrally and not always lean on the right wing, unlike her position at Barcelona. This adds variety to the team’s attacking movements and confuses opponents who think of Hansen just as a right-winger. Here you can notice how Hansen received the ball centrally and near the penalty box before dribbling past her direct opponent and going for a shot. 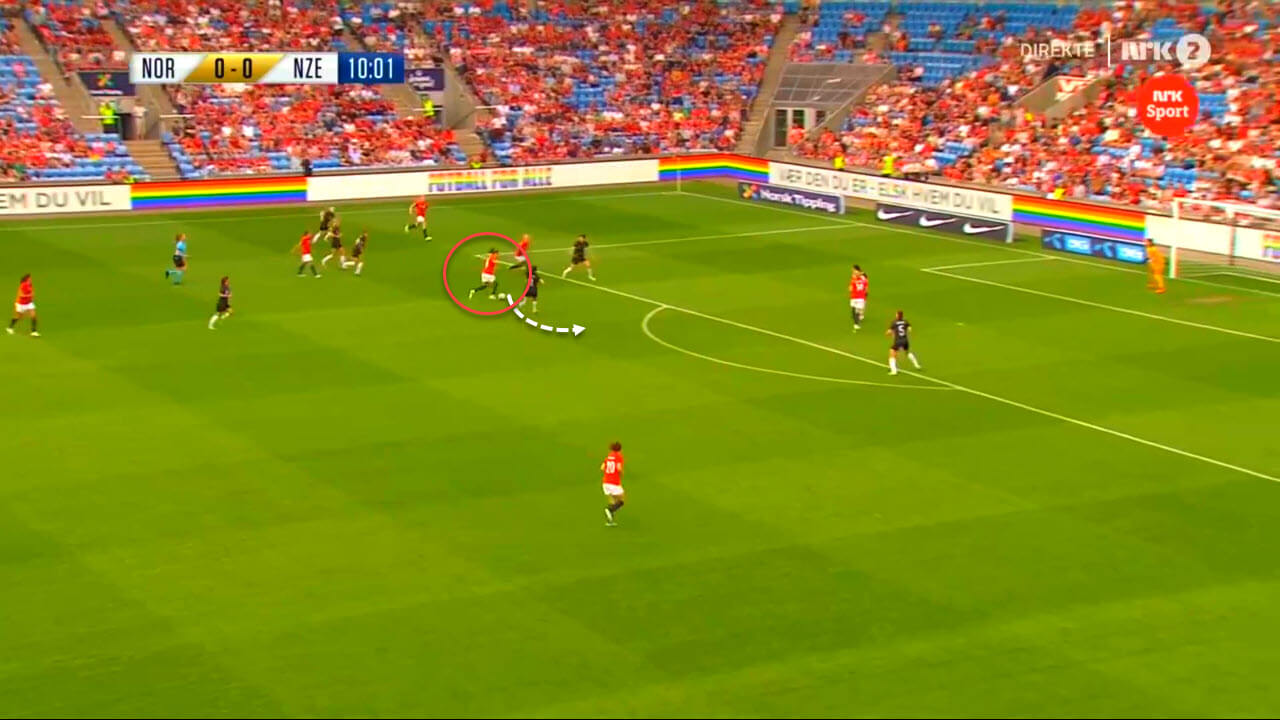 Attacking with numbers can always be fruitful from an attacking perspective even though it is risky in case of counter-attacks. Norway certainly attacked with numbers in this match and were able to keep their balance most of the time. The wingers and the midfielders’ contribution and attacking support can always bring more attacking options and facilitate the team’s goalscoring mission, knowing that Norway has some excellent players on the wings such as Reiten and Eikeland while the two midfielders Maanum and Engen can also be decisive in terms of providing key passes and shooting from distance. 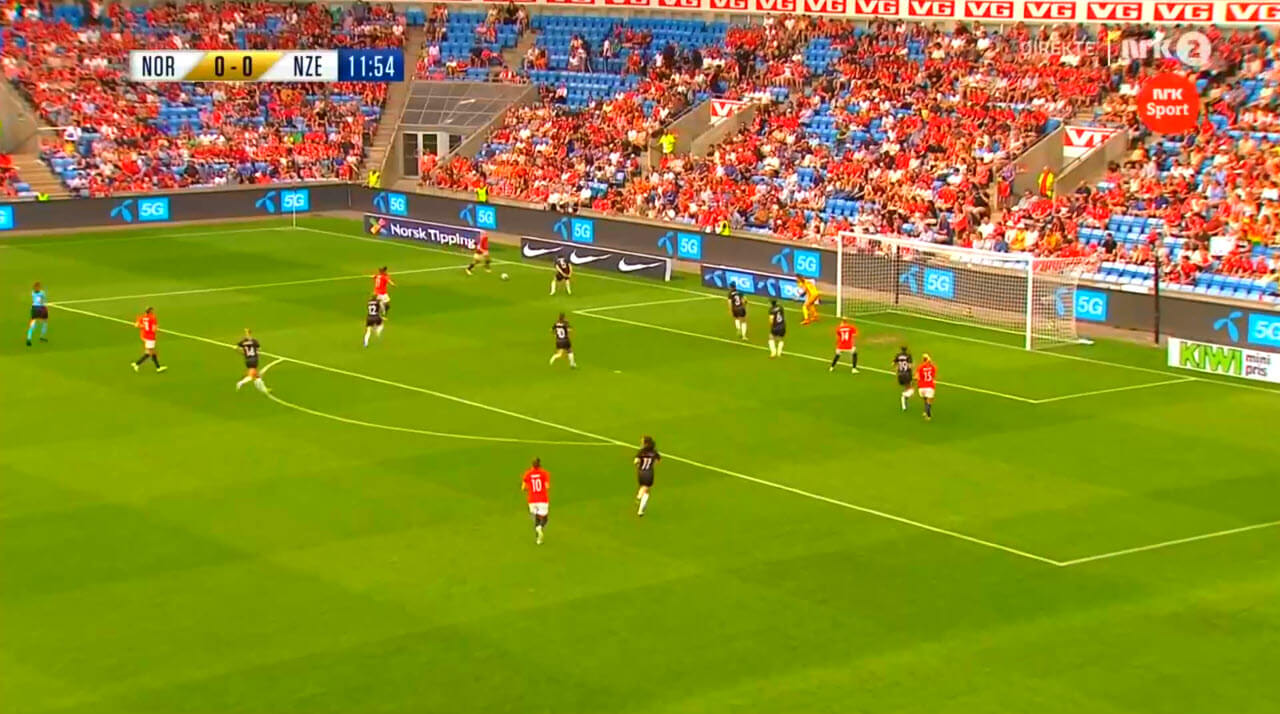 Engen can be exploited even further from an attacking perspective and the coaching staff will have to give her more freedom in terms of final passes as well as in terms of shooting from distance, as she proved before that she is capable of being extremely dangerous when executing these shots. In addition, having an outstanding finisher like Hegerberg obliges the team to rely on crosses from the wings in order to exploit her aerial duels abilities and finishing skills. We saw such actions occur mainly from the right-wing where Eikeland’s accurate crosses were well-exploited by Hegerberg despite being marked.

This just proves the player’s lethal goalscoring skills and highlights her efficient off-the-ball movement. In fact, Eikeland was always providing in the final third as she was often well-positioned to receive the ball and cross towards the box, and that’s really important for the team since Eikeland represents a very efficient option in attack as she contributed to a lot of Norway’s opportunities in this game. 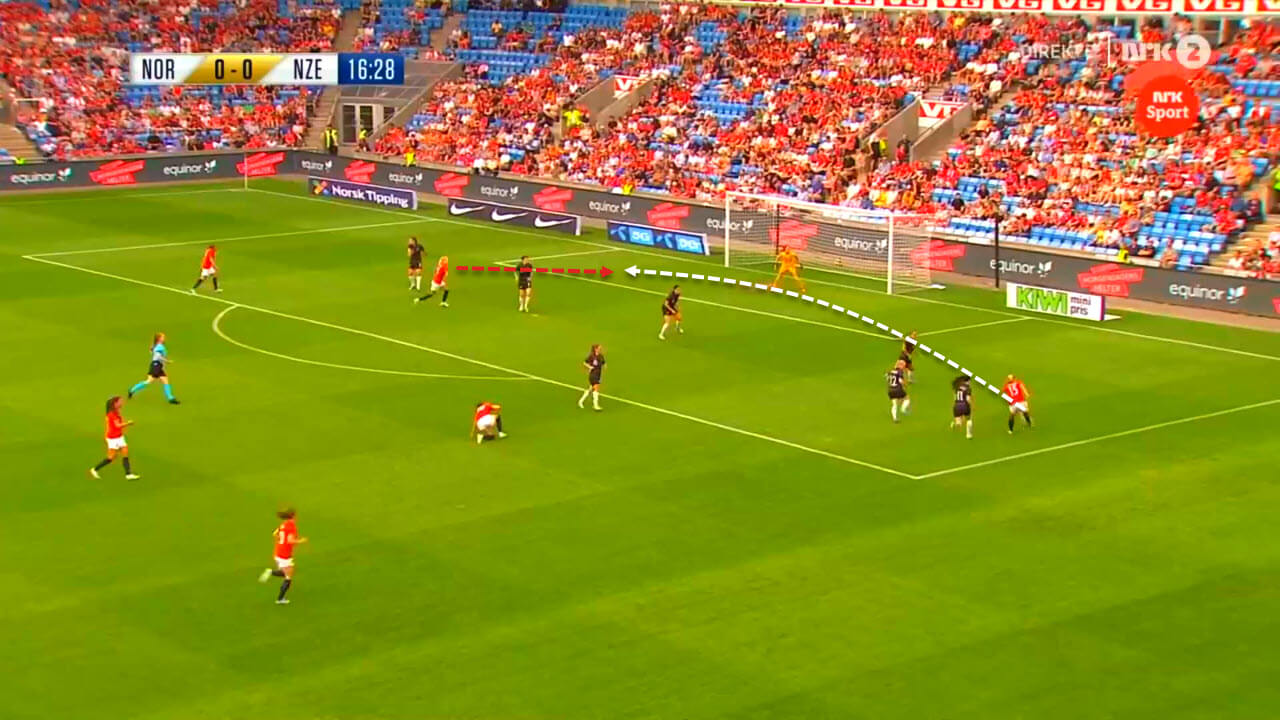 Hegerberg’s ability to play with her back towards the goal to protect the ball and provide backward passes should be exploited in a more efficient way in the future if the team want to surprise their opponents. Giving crosses or through passes to Hegerberg should be followed by a revised plan as soon as she succeeds in controlling the ball and turning.

In this action, she succeeded in turning after receiving an accurate cross, but as soon as she provided a backward pass to her teammate, the latter shot without too much thinking and missed an opportunity that could have been better prepared. By training, Norway can use these chances in a much more efficient way. 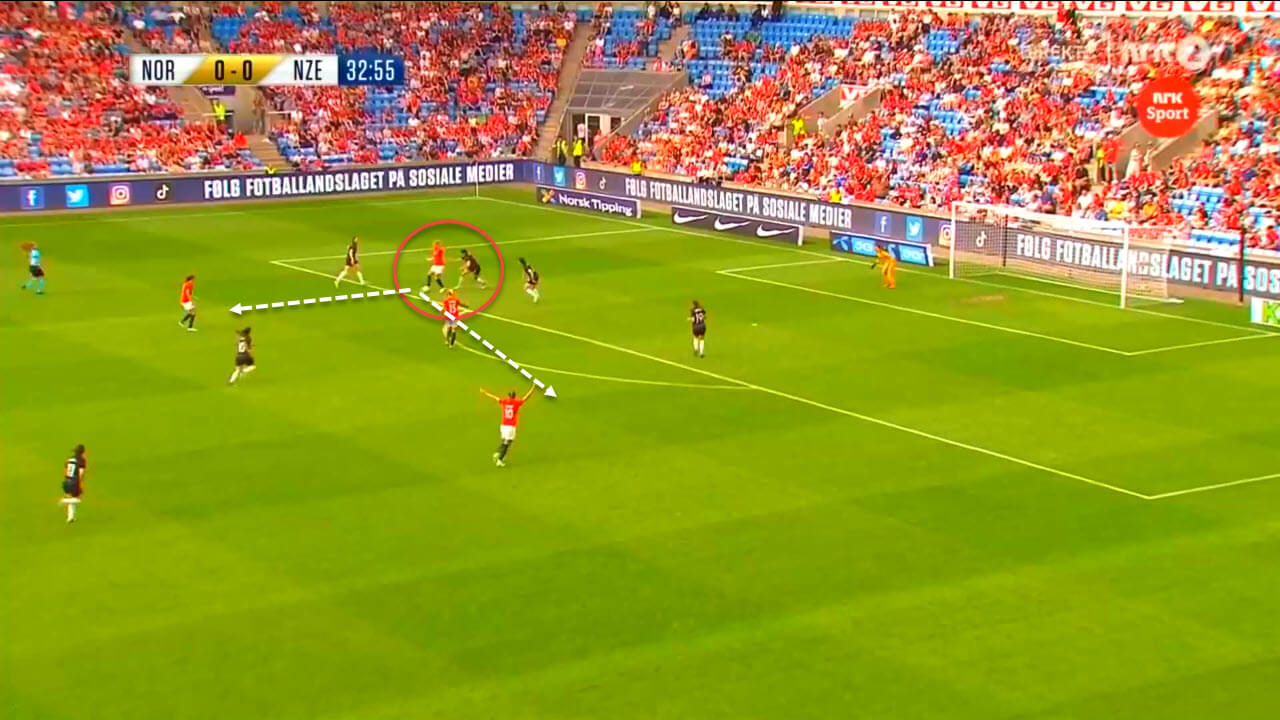 Norway’s first goal highlights almost everything that characterises Hegerberg. Her persistence and determination to keep the ball at her feet despite the continuous interception attempts and disturbance really show how powerful this striker is. Plus, after succeeding in keeping the ball, she was still able to find the necessary body coordination to shoot with her left foot without retreating and while being surrounded by opponents. Despite all this, she was still able to direct her shot well, with power, accuracy and towards the right angle. 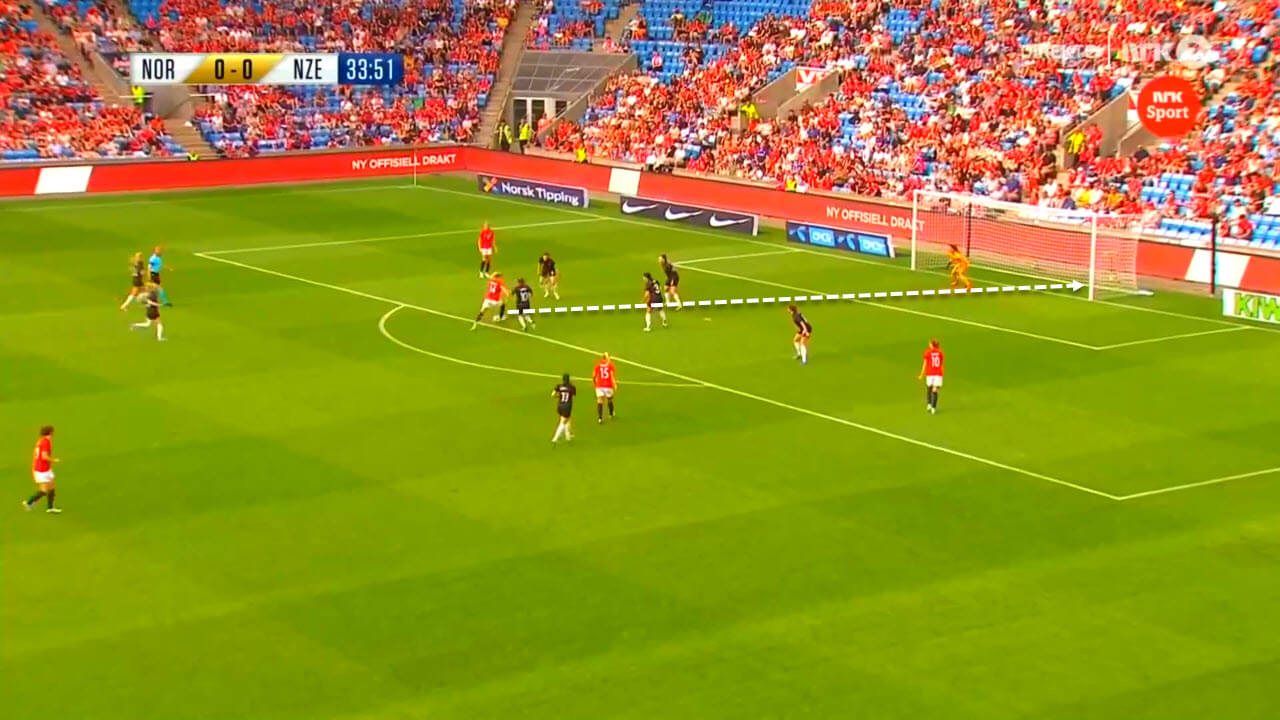 Norway were able to add a second goal at the end of the game thanks to an accurate cross from a corner and an outstanding volley from Bergsvand. Moreover, Hansen’s abilities were further highlighted in the second half as she was dangerous whenever got the ball on the left side before cutting inside and aiming for a shot or a key pass. This variation of positioning and movements can serve Norway a lot in their attempts to confuse defenders and find space at the back of defences, especially when knowing that Reiten and Eikeland will usually support the attacks as they also enter the box at times.

Hegerberg’s role will be key to Norway’s attacking success but the team shouldn’t always rely on her solely for goalscoring since that would make her moves predictable as it would oblige opponents into marking her tightly. Alternating between the types of attacks will be fundamental and necessary for Norway if they want to remain dangerous throughout the competition as that will create variety in attacks and will tire defences.

In terms of defensive performance, Norway won 67.35% of the defensive duels, conceded 2 shots on target and were solid overall since they didn’t concede a goal. They did however concede a disallowed goal and a number of dangerous chances. Therefore, Norway still has a lot of work to do regarding their defensive organisation especially when it comes to marking.

During crosses, Norway’s centre-backs will have to be more attentive to attackers’ movements and they’ll have to follow them instantly to not commit mistakes inside the box. In the following picture, New Zealand were able to cross from the right wing and Wilkinson was able to touch the ball inside the box without real disturbance from Norway’s defenders, which is something that shouldn’t happen at all. 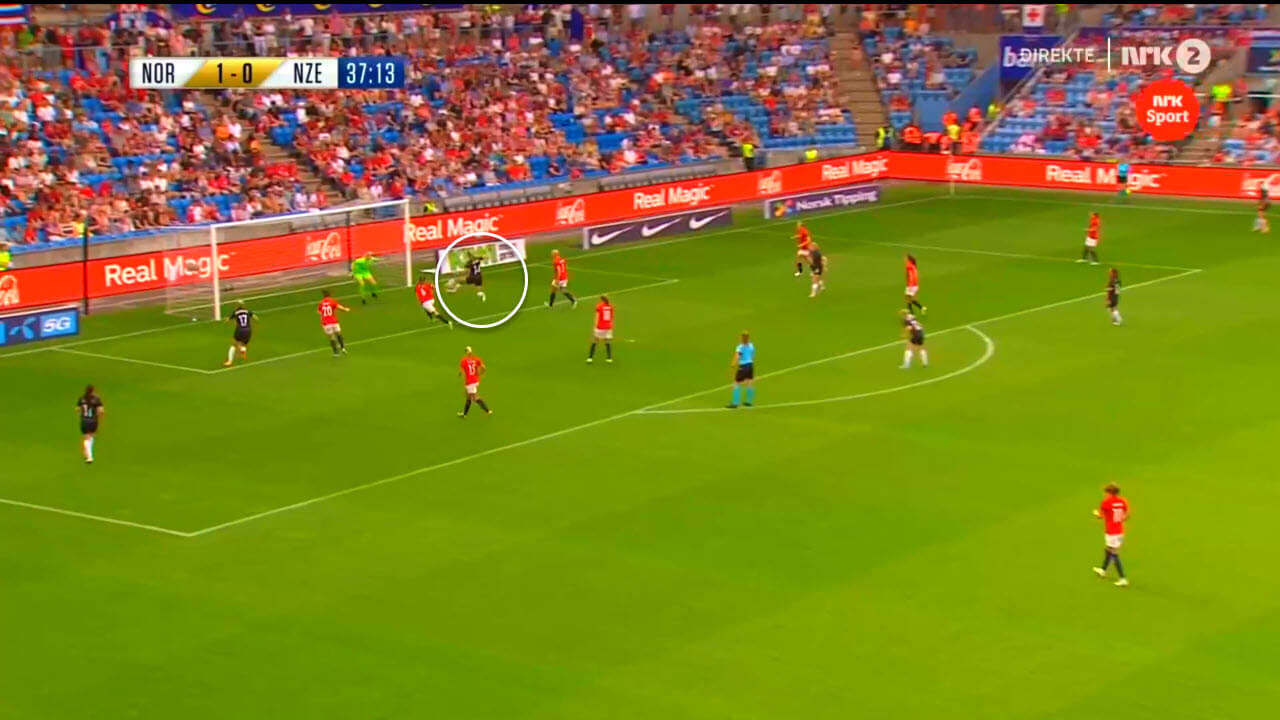 Despite this remark, it should be said that Norway were excellent in defending against counter-attacks and especially in the following 2 vs 2 situation where the two Norway defenders succeeded in limiting New Zealand’s threat thanks to their attentive and aggressive marking.

This will be important during UEFA Euro 2022 since the team is more likely to face similar situations. Therefore, being extremely prudent and aggressive at the same time will be key to stopping or obliging opponents’ to retreat or lose time until the rest of the defenders regain their positions. 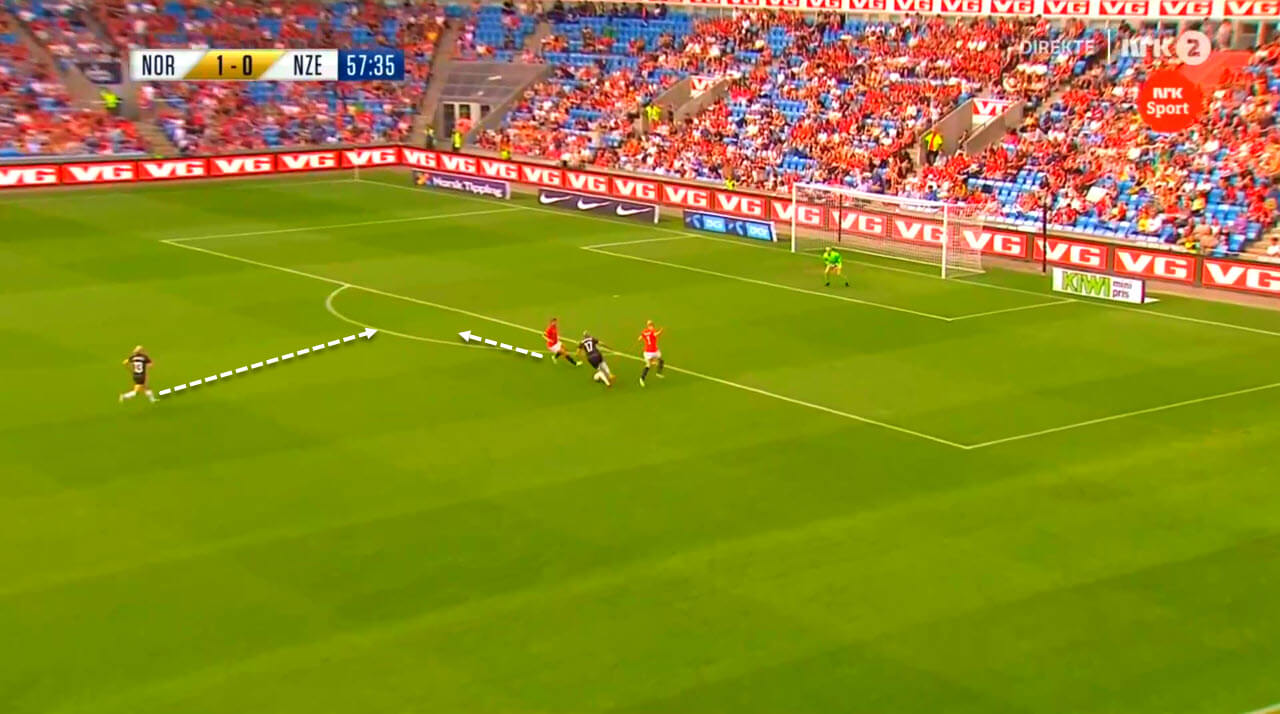 Norway proved in this match that they have some solid and reliable attacking options up front and that they will find no problems in scoring goals. The coaching staff have also shown their interest in the 4-4-2 formation and it is more likely that the team will play the tournament according to this formation since it suits the players’ characteristics while it guarantees the necessary balance between attack and defence, using two lines of defence and a strong attacking duo.

Nevertheless, this analysis has proved that the team needs to be more decisive in defence, especially in the air and when defending set-pieces as this can work against them when playing against teams with excellent players in aerial duels. Other than that, they should train further on the organisation of defence in order to move according to a specific line and be synchronised.