Scott Parker has been in charge of Bournemouth for a full season now following his relegation from the Premier League as Fulham manager. Parker has guided the Cherries to promotion at the first time of asking. The former West Ham midfielder now has two EFL Championship promotions under his belt and is becoming one of the best up-and-coming managers around. Parker has amassed a 54% win ratio as Bournemouth boss and he will be hoping he can continue this great form next season.

This tactical analysis will look at how Scott Parker guided AFC Bournemouth to promotion to England’s top-flight division. Within this analysis, the tactics and decisions made by the manager will be explained and understood.

In possession, Parker sets his side up in a 4-2-3-1 formation utilising a double pivot. For the majority of the season, this paring has been Lewis Cook and Jefferson Lerma.

This partnership has a great understanding of each other and knows the other game. When in possession, Cook drops deeper and offers himself as an option for the defenders. Cook is very comfortable on the ball and excels at progressing the play forwards. By dropping deep, not only does he give his teammates an option to pass to, but he also allows for Bournemouth to set up in a much more open and expansive way.

Lerma pushes forward and finds pockets of space between the lines where he can try and receive the ball. By doing this, it gives space for Cook to comfortably get on the ball. The Bournemouth fullbacks push wide but not too high when building up. Parker takes a more conservative approach with how far he likes his fullbacks to go in the early stages of build-up. This aids him if there is a quick turnover in possession, as his team are in place to recover. 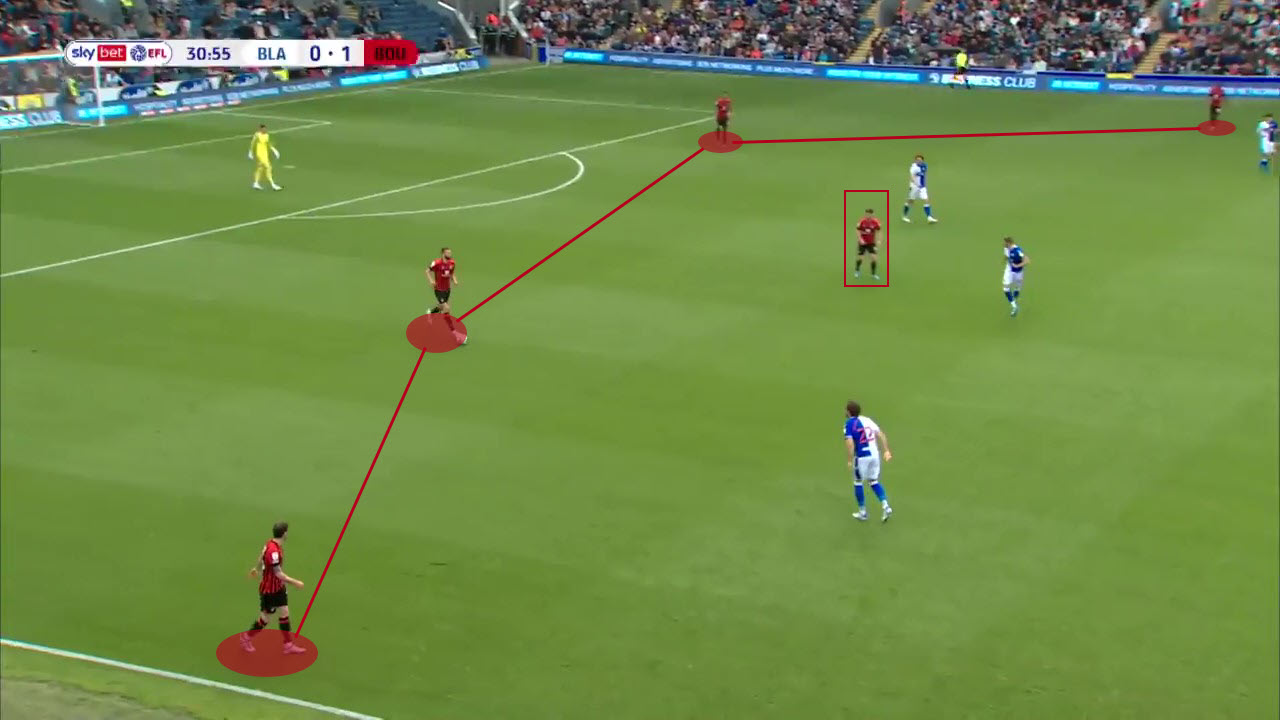 Furthermore, when building up. The space vacated by Lerma is often utilised by former Liverpool defender, Nat Phillips. His tendency to carry the ball forwards into the midfield area creates good opportunities to play forwards. When stepping in, Phillips looks to play a killer ball into his striker. If successful then the Cherries are in a prime position to attack further as the killer ball will have bypassed the opposition midfield completely.

This season, Phillips makes 7.24 passes to the final third per 90 and 9.19 progressive passes per 90. Both statistics rank over 1.5 more than the league average for centre-backs, who have played over 1,000 minutes. Phillips plays a key role in ensuring that Bournemouth can build up and his ability on the ball is well utilised. 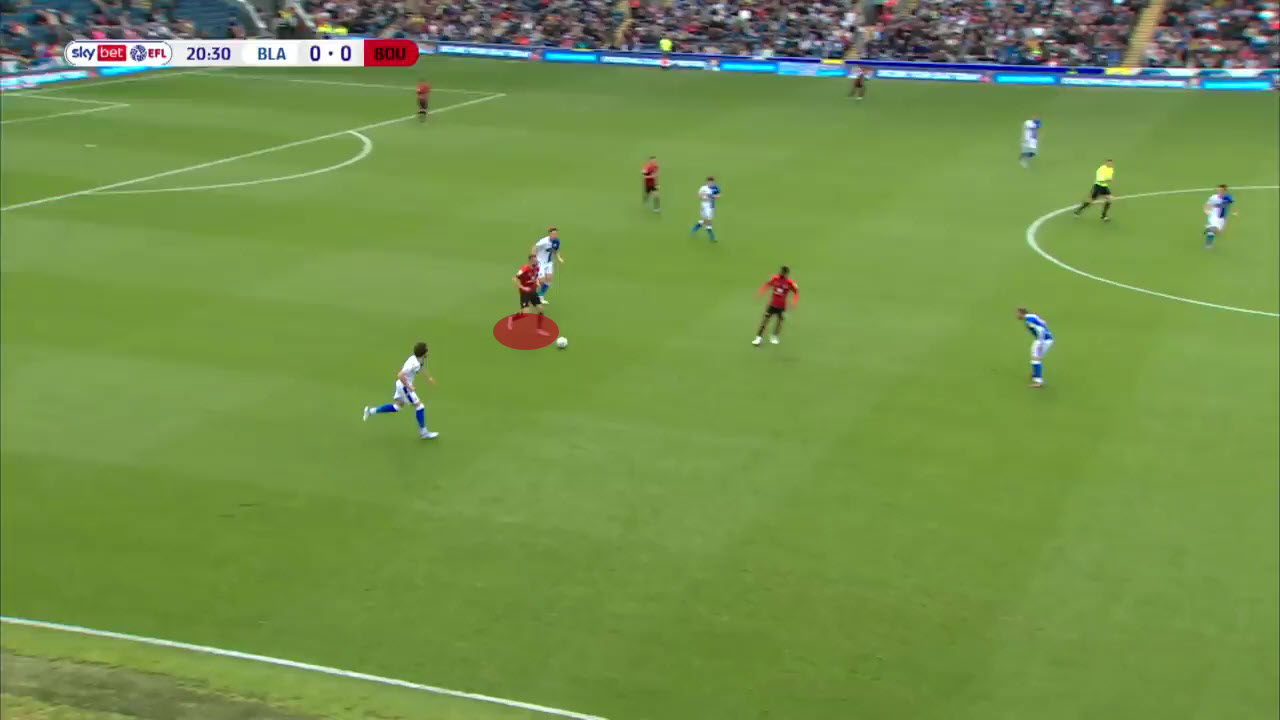 When attacking the final third, Bournemouth are quick to create wide overloads. By doing this, they create space on the inside of the opposition which they look to capitalise on. To create these opportunities, the wide player must have support quickly to draw over the opposition.

The overlapping player acts as a decoy by changing the focus of the opposition and making them drop deeper. The space created inside the pitch allows the Bournemouth attackers to link up quickly with slick combination play.

The overlapping player is usually the fullback on the left-hand side. On the right-hand side usually, Jefferson Lerma offers himself. Adam Smith, the first-choice right-back, is a more defensive-minded fullback who chooses his moments to go forward. The use of Lerma playing higher up the pitch works well as Lerma acts as an attacking outlet in the wide area when Smith does not. 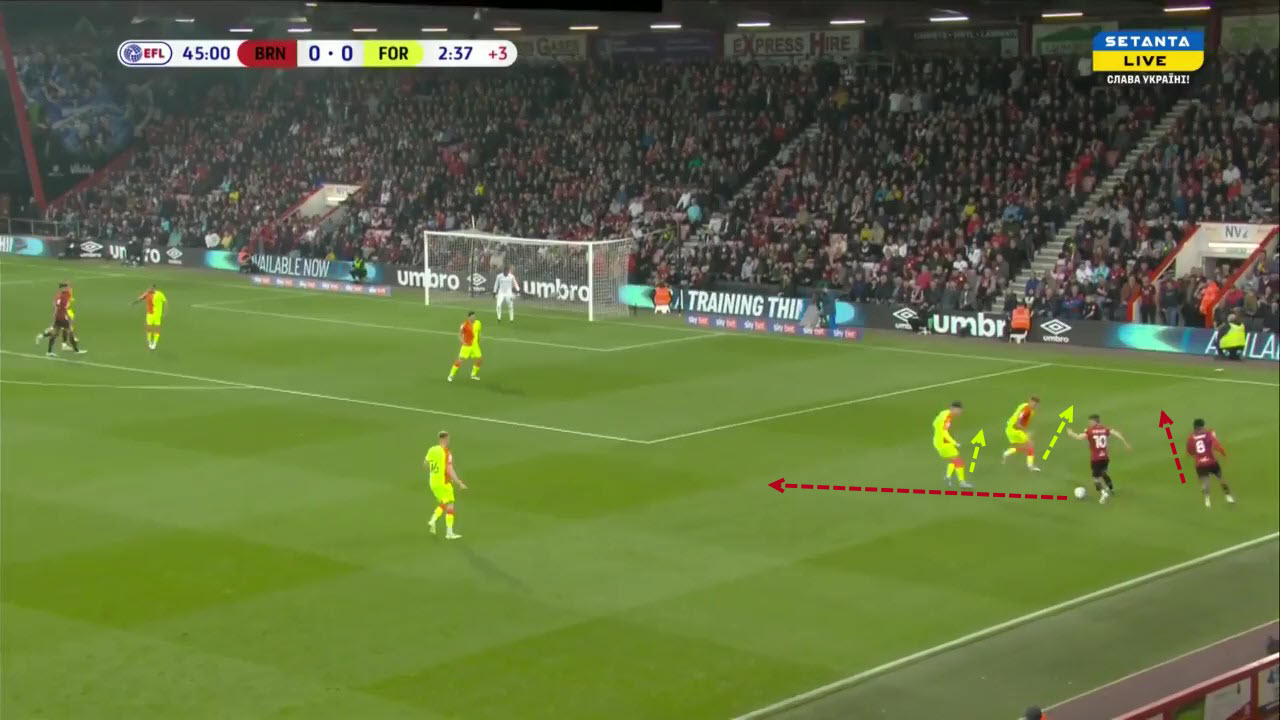 Moving on to the business end of the pitch. When it comes to scoring goals, Bournemouth haven’t struggled to score, bagging the second-most this season with 74. Their attacking method involves lots of touches in an around the area and quick combination play. Parker’s side averaged 19.72 touches in the penalty area per 90, the third-highest in the league and star man Dominic Solanke has the league’s most with 246 touches inside the penalty area this season.

A clear method of attack that has been perfected to create goal-scoring opportunities. Parker’s men know their roles and how his side is set up to play. His team know not to make unnecessary runs behind and his side has the lowest amount of offsides this season with 45. A clear structure and plan have been brought in by Parker and one which his players all buy into and follow.

Furthermore, to enhance their progress forwards, Bournemouth operates with a second striker. The player who plays the ‘number 10’ role is used alongside Solanke and forms a partnership. Phillip Billing has performed this role this season and has been phenomenal.

The Danish international finished the season with 10 goals and 10 assists in the league. His partnership with talisman Solanke has proved clinical and enjoyable to watch. The pair work well off each other and Billing is always looking for Solanke. Below is a perfect example of how the pair combined to score a goal versus Blackburn Rovers.

Billing peeled off the defenders and played a lovely cushioned header into the path of Solanke, who found himself in acres of space because the attention of the defenders was on the Dane. This combination was then reversed in the second half with Solanke setting up Billing. The pair will be looking to add many Premier League goals between them next season. 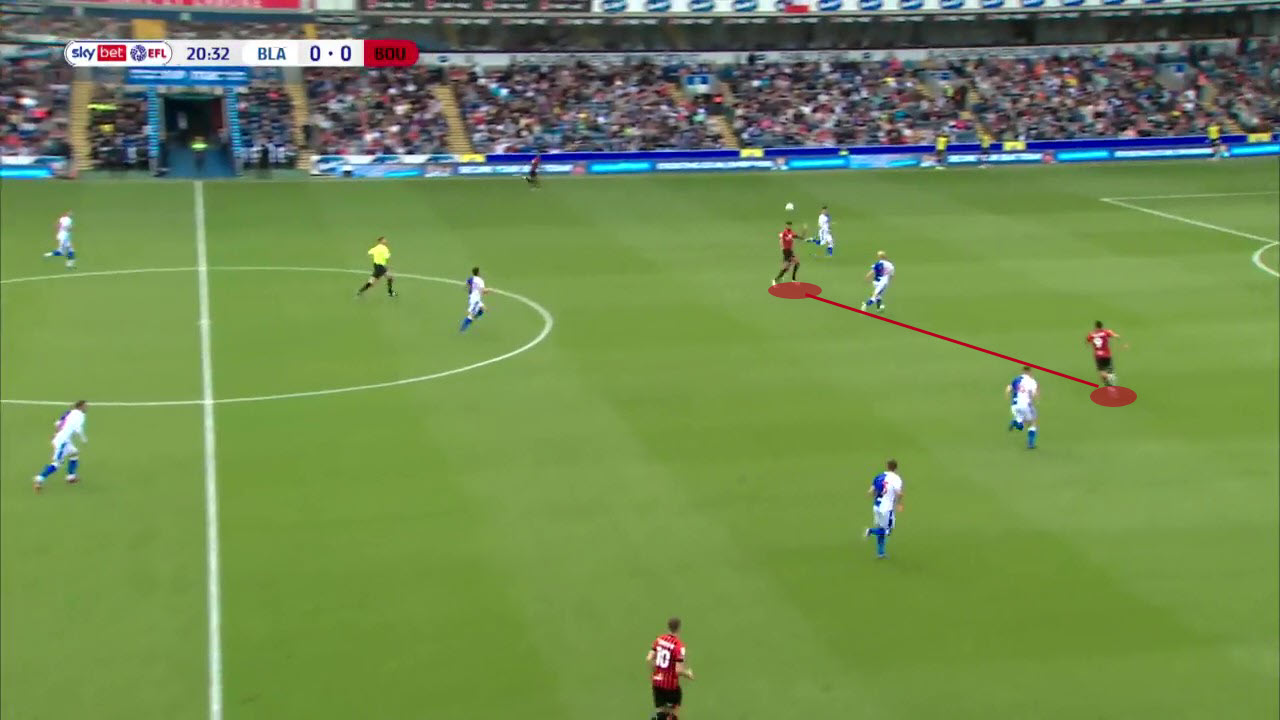 Below is the average positions of the Bournemouth players against Blackburn Rovers. Highlighted in the yellow is the midfield pairing of Cook and Lerma, as explained their positions are perfect for how Parker wants his side to play.

In the blue, the fullbacks have been highlighted. The left-hand side is a lot closer to the winger than the right-hand side. As mentioned this is down to Smith’s defensive-minded style.

Finally, in the green, the attacking duo are close together as Billing acts as a second striker. The duo cause issues for many teams and their understanding, awareness and positioning are excellent. 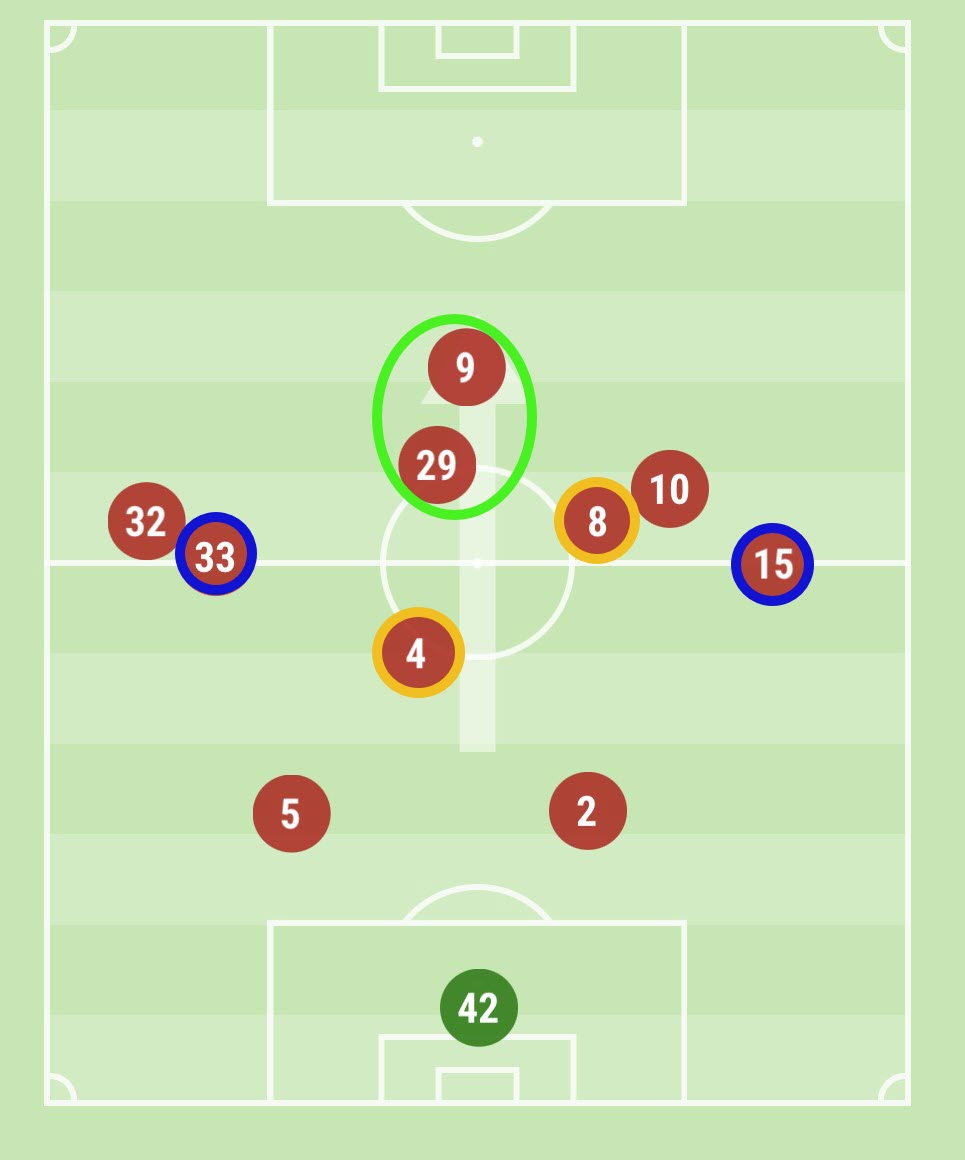 When out of possession, Parker sets his team up to be difficult to break down. This is evident in the fact they have conceded the least amount of goals in the league this season. conceding just 37 times in 48 games, a stat that will help any team to promotion and something that Bournemouth value themselves on.

Their stance when defending from the front is not to engage high up the pitch but rather to wait for the play to progress into their own half, where they have the numerical advantage, before taking action.

Below is how Bournemouth defend from the front. To do this they shuffle and block any potential passing lanes. They also apply light pressure to players who could potentially receive the ball and turn. By defending like this Bournemouth limit the amount of space but also limit the opposition to no overloads. 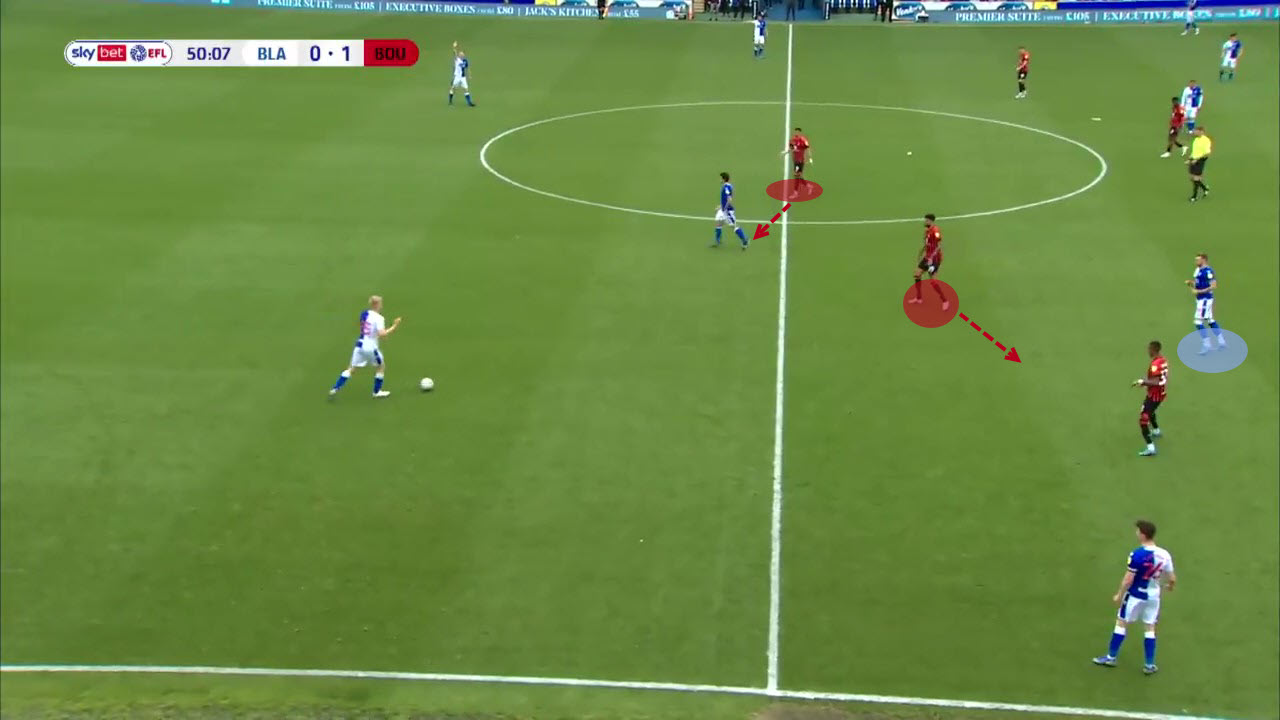 When Bournemouth do press, it is unorganised and causes them to lose shape. Below is an example of how trying to press can easily be played out. The decision by the striker to press the goalkeeper was not effectively followed up and the opposition were easily able to play around this. Moments like this can cause numerical disadvantages and lead to chances for the opposition. 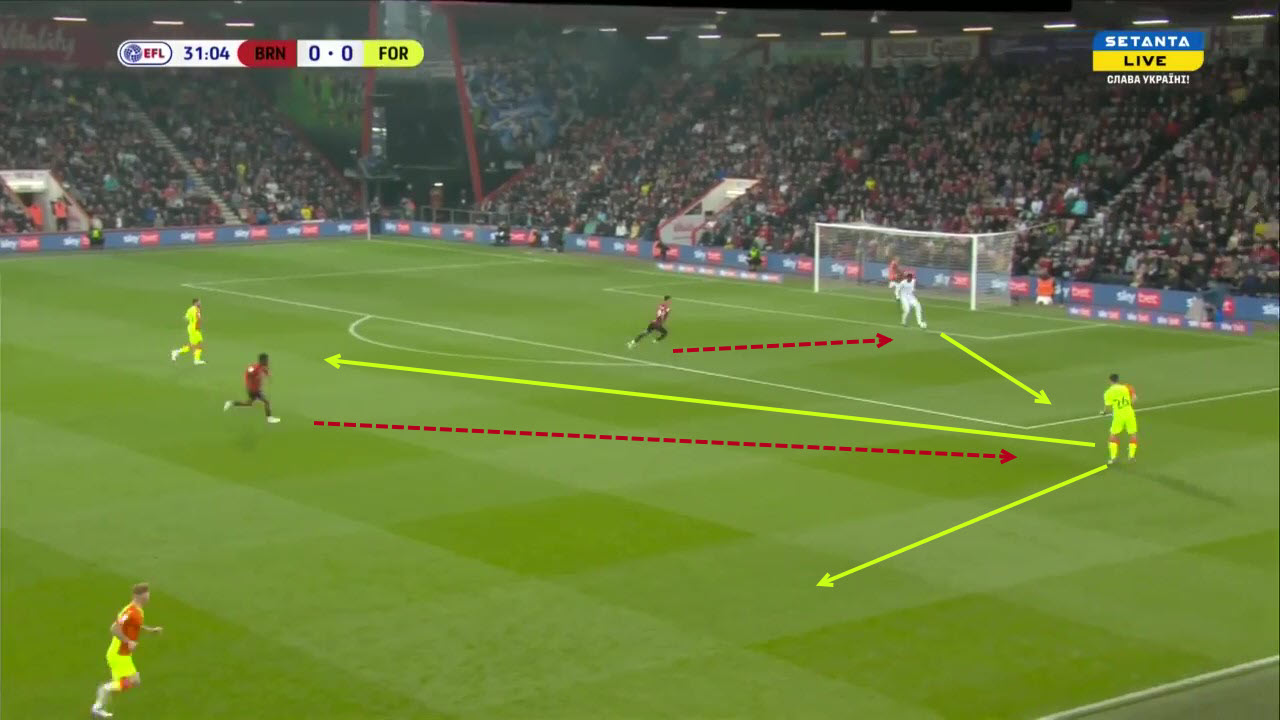 Bournemouth’s conservative mid-block ensures that they are comfortable out of possession. Their midblock operates in a 4-4-2 formation with the wide attackers dropping deep and the ‘number 10’ joining the striker.

This defensive formation is commonly used by teams who want to be difficult to break down. The two banks of four are very organised and rigid in their movements across the pitch. This defensive structure set up by Parker has aided Bournemouth with six 1-0 wins this season.

When transitioning to attack, Parker wants his side to be quick and direct. to do this Bournemouth look to make clever runs to make space for other teammates. By doing this they create the best opportunity to score following a turnover.

Below, the striker makes an angled run away from his teammate. This drags the opposition with him and creates space for the wide player to exploit. This tactic is something well-rehearsed by Parker and comes in good use when transiting.

Bournemouth don’t play ‘risky’ passes and they wait for an opportunity to play the right pass, once space is available. The selfless off-the-ball runs ultimately mean that Bournemouth have a higher chance of creating a chance to score. This is only possible with willingness and a good awareness of where play is on the pitch. 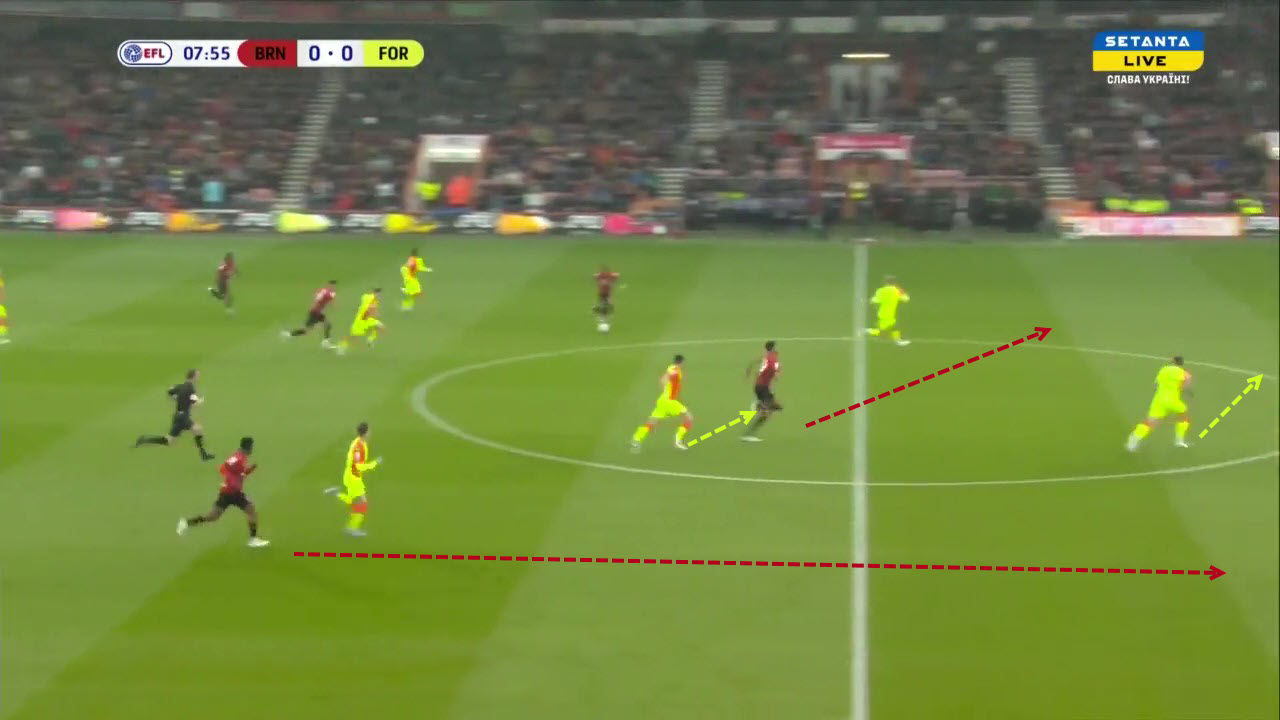 When defending, Bournemouth deploy a light counter-press. They look to win possession back quickly but after a short period, they then regain shape and defensive position. Those one or two players closest to the transition look to press directly.

The players in the wider proximity, look to cut off any viable passing options. Marking the opposition’s way out of a press significantly reduces the chances of a successful turnover/ counterattack.

By making a sort of net-like structure by predicting the opposition’s next move Bournemouth can easily limit their opponent’s counterattacks. Once this press is sustained for a short period, they look to recover and get bodies around the ball. 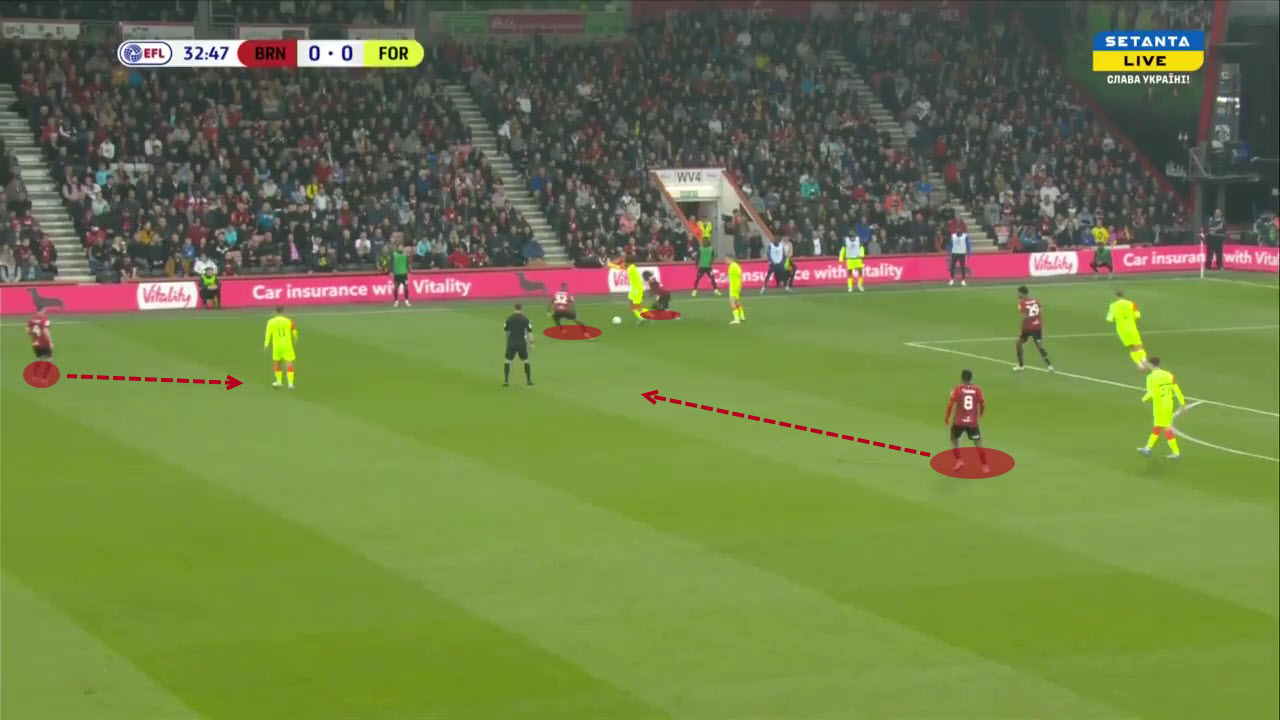 Overall, Bournemouth play very exciting football and Scott Parker has done an amazing job securing promotion. Next season will be a completely different challenge as they will not be able to dominate teams in the manner they did this season. With a few smart editions already, they look set to avoid relegation. If Dominic Solanke can make the step up then the Cherries could have a great season.