Rafa Benitez, former Real Madrid coach, against Pep Guardiola, born and raised in Barcelona. They didn’t coincide when leading the largest teams in Spain, but both have had quite a career. Newcastle have not been having an easy time battling near the relegation zone, while Manchester City needed to keep the pressure on Liverpool in the title race.

The visitors were in great form, having won their previous eight games and not conceded in the last six. In this tactical analysis, we dig into how Newcastle arrived as big underdogs and posted one of the biggest surprises of the week, along with Chelsea’s 4-0 loss against Bournemouth, by beating Manchester City 2-1.

Game over after one minute?

Newcastle started the game with a 5-4-1 tactical setup, a common display by Rafa Benitez that has had some slight variations during games depending on the rival and the result. Even though Venezuelan international Salomon Rondon was left mostly alone up the pitch, he became a headache for Manchester City’s defence. Contested balls were very hard to win for City and he was always available for his teammates to receive the ball facing his own half.

Meanwhile, Manchester City started with a classic 4-3-3 with rotation coming again in the midfield, as the inside midfield positions were filled by David Silva and Kevin de Bruyne. Not even 30 seconds had passed before Manchester City were able to score the opening goal through a good combination between Sterling, David Silva and Agüero. The incredibly smart Spanish midfielder assisted Agüero with a headed pass after slipping. He was forced to use his head as a last resort to keep the ball in play.

It is common to expect a change in the tactical disposition after a goal, especially from the team that is losing trying to regain possession and press higher, but this was not the case. Newcastle kept their defensive positioning, patiently waiting for Manchester City to commit mistakes, leaving them to pass freely closer to the last third of the pitch.

Contrary to how other teams have played, Newcastle didn’t try intense pressure when Manchester City were closer to their defensive line. The line of four in the midfield, very coordinated with the defensive line, was devoted to reducing spaces and blocking lines of passing rather than trying to rob the ball. 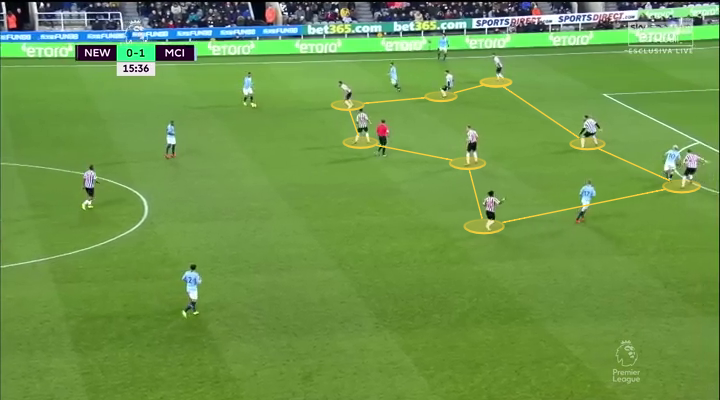 They had no issues letting Fernandinho, Danilo and Walker pass the ball as long as they were not able to connect vertically with Silva or De Bruyne. Even when either of those two moved back to receive the ball, Newcastle didn’t rush to press them tight, as long as they were far from their goal area and they could block passing lines they felt comfortable. The result was that Manchester City had 11 shots during the game, below the 16.3 per game of the last calendar year according to Wyscout. 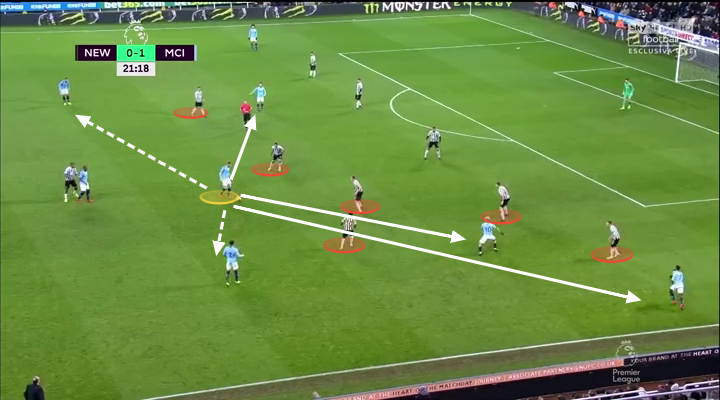 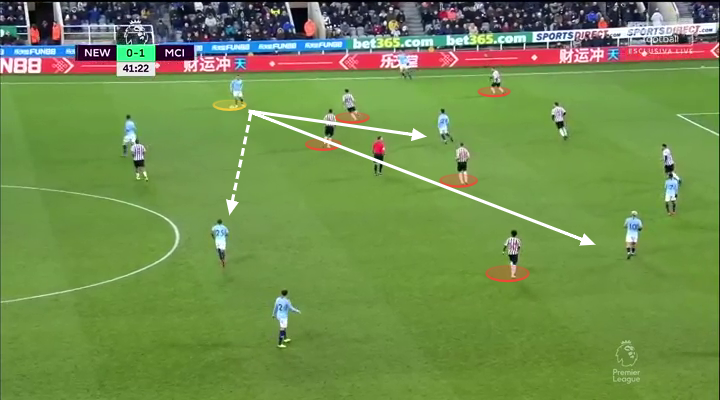 This positioning confused Manchester City. The champions are used to rotating the ball and open spaces through quick movements and short passes. Because Newcastle focused on zonal marking, those movements didn’t generate danger or confusion in the home team’s defence.

Newcastle allowed Manchester City to pass the ball as much as they wanted, but only lateral passes, including opening wide to Sane and Sterling, but not forward passes. This forced Manchester City to always have either De Bruyne, Silva, Agüero, Sane or Sterling moving back to be able to receive the ball, reducing the attacking strength of the visitors.

If they didn’t move back, it was very hard for them to find clear spaces, as seen in the picture below. Newcastle suffered more from their own mistakes with balls lost in their own half rather than on Manchester City’s attacking production. 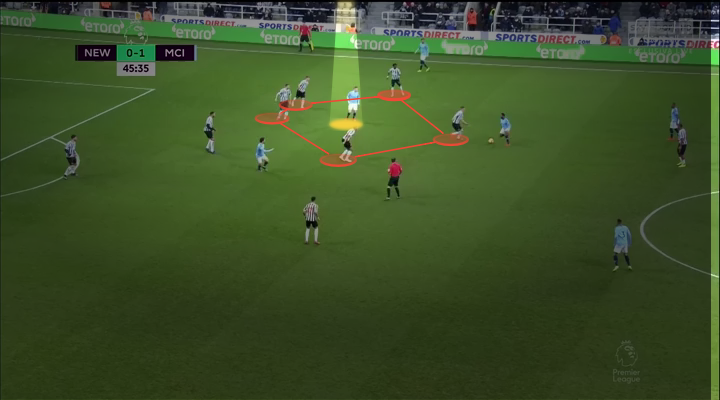 This confusion resulted in Manchester City losing 106 balls during the game, according to Wyscout, compared to an average of 89.72 in the last calendar year. Even though possession was heavily in their favour at a whopping 76.5%, this didn’t translate into attempts. Newcastle had one third of the possession of Manchester City but they had six goal attempts, more than half of their opponnents’ tally.

During the first half, Newcastle didn’t generate a lot of clear chances, but their attacking shape was a little bit more evident. They looked for long balls to Rondon for him to head the ball and take advantage of the speed of Atsu and Ayoze Perez, or hold the ball trying to pivot it back to the midfield line and build-up from there.

The strong Venezuelan striker was a nightmare for City defenders. Newcastle managed to successfully implement this strategy but without enough depth. It was a warning note that should have been picked up by Manchester City but wasn’t. The strategy continued during the second half. 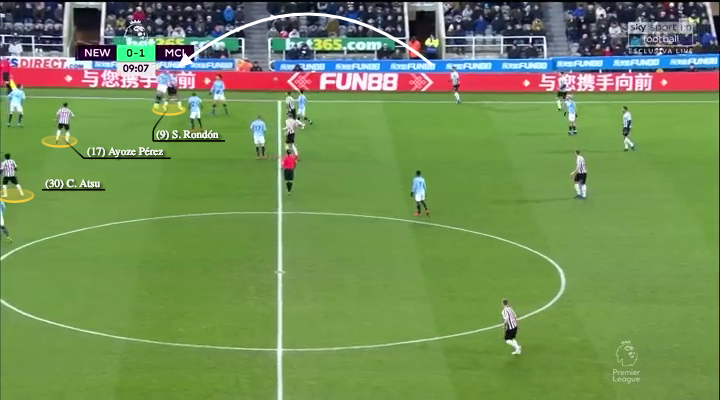 The first goal for Newcastle may have not come from a long ball to Rondon, but it certainly came from the body strength of the Venezuelan and the passive attitude by Manchester City’s defence. The ball was sent into Manchester City’s goal area twice, and the second time there were three Manchester City defenders next to the ball. None of them attacked it clear the danger, while Rondon used his strength to run in between the crowd looking passively at the ball and hit it home for the equaliser.

The storyline of the game didn’t change much with Rondon’s goal. Manchester City kept possession trying to progress closer to Newcastle’s goal, but lacked enough creativity to move past the home team’s midfield line. They looked for some long balls, especially trying to take advantage of Sterling’s speed. The Newcastle defensive line performed very well though, especially with both centre-back covering the positioning of their respective wing-backs when long balls passed above them. 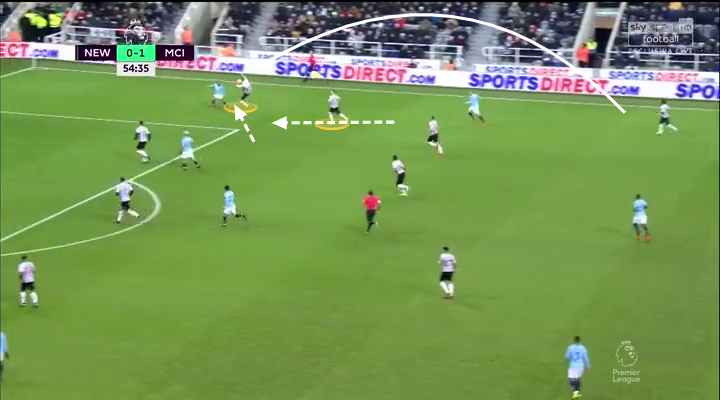 With Manchester City pressing higher, and with more target men closer to the area after Gabriel Jesus replaced Sane, an innocent mistake between Fernandinho and Danilo ended up in a well-taken penalty by Matt Ritchie to seal the win. Even though it was Fernandinho who lost the ball, Danilo did compromise the central midfielder after passing to him inside the area with the former surrounded by Newcastle players. 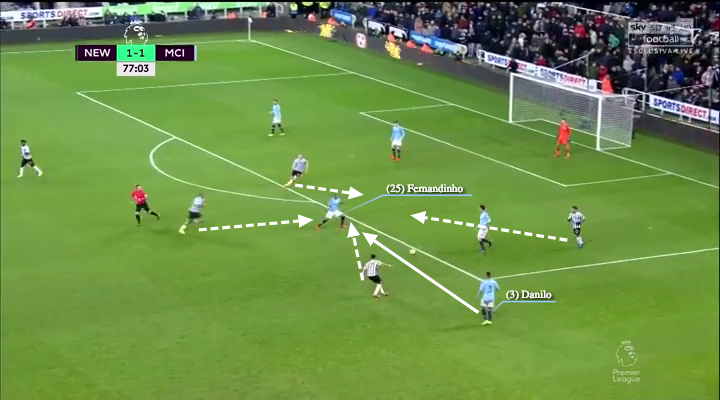 Lucky enough to be alive

Liverpool had a big chance to increase their advantage over Manchester City. They only managed to tie against Leicester City at Anfield, increasing their lead by just one point. It wasn’t a good round of matches for Manchester City but it could have been worse. Although they still depend on Liverpool losing points, the margin of error has been reduced even more.

Also of concern are some below-par individual performances. Kyle Walker has been very weak for several games now, not adding value going forward while looking very insecure when defending. Kevin de Bruyne still has work to do to get back to the level he was showing before getting injured. He has been more imprecise than usual and has lacked the mobility to be able to receive with enough space where he can inflict more danger.

Champions League knockout football is coming. Manchester City will hope that the last game was a bump in the road; a road that had been doing very well up until that point.