Blackburn Rovers held Newcastle United at a 1-1 draw at St. James’ Park on 5 January. The struggling Premier League outfit was looking to get a win against Blackburn in the replay, but it didn’t prove to be easy against the Championship team as this tactical analysis will show using statistics.

Neither of the managers wanted the replay to happen because of their precarious situation in their respective leagues. Nevertheless, Tony Mowbray’s side chose to go for an entertaining game with an attacking frame of mind. Blackburn opted for a 3-4-3 formation with Adam Armstrong, Danny Graham and Ben Brereton posing a constant threat to the Newcastle defence.

Benitez’s side adopted a slightly more conservative 4-1-4-1 formation with Fabian Schär playing between defence and midfield. As Newcastle wanted to restore balance to their form, this formation attempted to do just that.

In this tactical analysis of this FA Cup replay I will look at three tactical trends during the game. These are the way Newcastle’s defence was set up, how Blackburn’s aggressive reaction helped them score and the 4-4-2 formation that Newcastle had at the end of the game.

With an attacking Blackburn formation, it was interesting to see how Newcastle would set up at the back. Given the fact that they have looked remarkably poor in the Premier League at times, ex-Liverpool manager Rafa Benitez would be eager for a solid defensive display at Ewood Park.

The Magpies on paper played a back four consisting of Javier Manquillo, Ciaran Clark, Federico Fernandez and Jamie Sterry. In possession, Manquillo played as a highly positioned left-back to support the midfield in attack while Sterry stayed back to keep three defenders in case of a counter-attack.

In reality, they formed a 3-4-3 formation in attack. The back three was supported by Schär, who played a central midfield role on the same line as Manquillo. He was versatile in his role and in this case served as the player who distributed passes to the attacking midfielders.

When Blackburn were in possession, the guests’ defence was in full swing. Their 4-1-4-1 was clearer and in reality looked more like a 4-3-3. The four defenders were supported by Schär who in this type of situations played as the fifth defender. Three of the four attacking midfielders – Matt Ritchie, Callum Roberts and Sean Longstaff – helped strengthen the defence, which made it incredibly difficult for the Blackburn attackers to get through.

After conceding two goals, Newcastle started to shift their formation slightly. They started to play two strikers upfront, which meant that their defence was built up differently too. The back four was supported by four midfielders in a 4-1-3-2 formation, which on the counter-attack could prove more deadly with the two strikers. They didn’t press high though, letting the Blackburn wingers have the ball make the runs, as high pressing would lead to great chances for Blackburn. This tactical approach was built on stability rather than risk.

After Armstrong had scored to make it 2-1, Blackburn started playing in an aggressive style. They did not want to be second best and that showed in their determination to get the ball. Their intention was to attack, although their formation did not change. 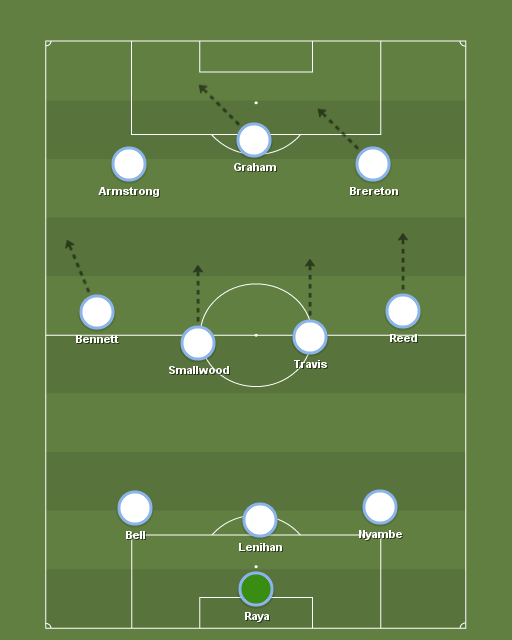 Their formation remained 3-4-3, but the intention of the midfielders changed with the sudden goal. They made runs forward and in doing so created a number of hazardous situations in front of the Newcastle goal. Elliott Bennett and Harrison Reed made runs down the line, which led Armstrong and Brereton to get into the box, trying to convert the crosses.

This cross is whipped into the box where three players – and a fourth on the edge of the box – are waiting for the ball to come in. Almost every attack followed the same process. The ball was passed to the wide midfielders Bennett and Reed, who both made the run down the line. Armstrong, Graham and Brereton got into the box supported by central midfielders Richard Smallwood and Lewis Travis, who would arrive at the edge of the box. Their style of play forced out a corner, which would lead to the equaliser by Darragh Lenihan just before half-time.

Newcastle were not able to push for a win in the regular 90 minutes. As a result, they had to figure out what to do in order to win the game in extra time and go through to the next round. Until the 94th minute, they remained in a 4-3-3 formation. 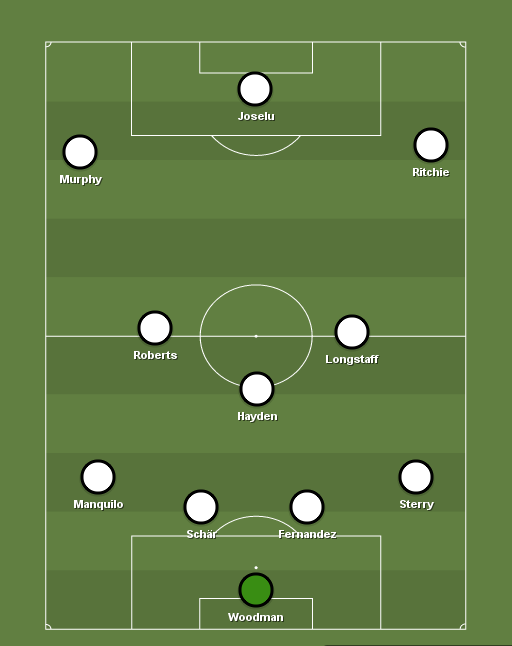 Schär then dropped a line to central defence instead of Clark who was subbed off. In his place came Isaac Hayden to play in the central midfield role. Jacob Murphy, Joselu and Ritchie were the three attackers who had been trying to press from around the hour mark. At this point, Benitez brought on Ayoze Perez and that changed the balance within the team as they shifted to a 4-4-2. 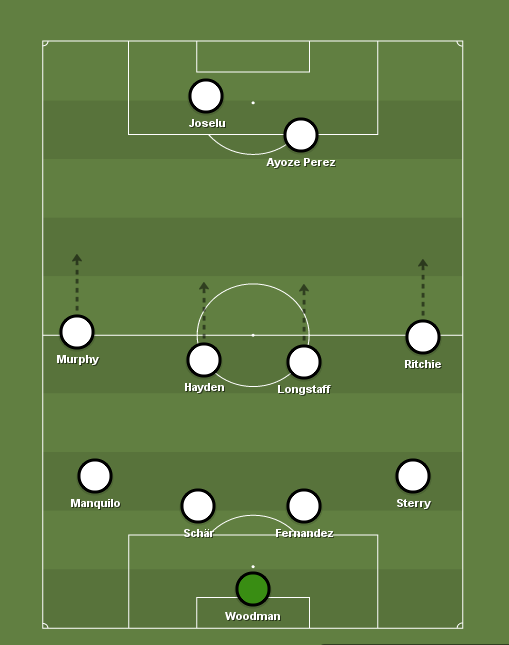 With Ayoze Perez coming on, Newcastle United had more grip on Blackburn Rovers. The hosts’ 4-2-3-1 couldn’t handle it as Newcastle went all out attack. All the midfielders were involved, and on occasion even Fernandez got forward.

Because Blackburn played deep, Newcastle could afford to be dangerous on the break as they pressed for a winner. They had a lot of men forward in attack, just as you can see in the image above. Just prior making it 3-2, Newcastle had seven men involved in this particular attack and Blackburn struggled with the numbers of Newcastle players.

Bringing on Ayoze Perez was the key to the success of the 4-4-2 formation, because he made different runs at the defenders while Joselu did the same. Blackburn couldn’t cope, which made it possible for Newcastle to also score a fourth.

It was certainly an entertaining match to follow with a Newcastle side that was slightly better than Blackburn. The hosts knew how to combat their guests with aggressive style of play however, and let the wide midfielders put in crosses. It took Newcastle until the 94th minute to figure out how to react to this style of play, but the introduction of Ayoze Perez into the 4-4-2 formation saw them victorious and go through to the next round of the FA Cup.