Monterrey welcomed Sporting Kansas City for the semifinals of the CONCACAF Champions League. This competition offers a chance for MLS clubs to compare directly with Liga MX clubs, and to see how their project is proceeding to become the strongest competition in their confederation. Monterrey eliminated the reigning MLS Cup champions Atlanta United in the previous round and found themselves up against the only remaining MLS club in the competition.

MLS is desperate for their clubs to do better in this competition but have struggled with a couple of disadvantages. The first is a salary cap that restricts the amount of money each team can spend, and this is a restriction that the Mexican clubs don’t have to worry about. The second is the calendar. The knockout stage of the CONCACAF Champions League begins just as the MLS clubs are finishing their pre-season, while it falls in the middle of the Mexican season.

As the final MLS club, it was left to Sporting Kansas City to defend the honour of their league and show that it is catching up to Liga MX. If that was the intention going into this match, the league will be embarrassed at how the first leg turned out. After 15 minutes at Estadio BBVA Bancomer, Monterrey were already up 2-0. The hosts were able to repeatedly open up Sporting Kansas City on the counter-attack, with the American side looking helpless to stop them. 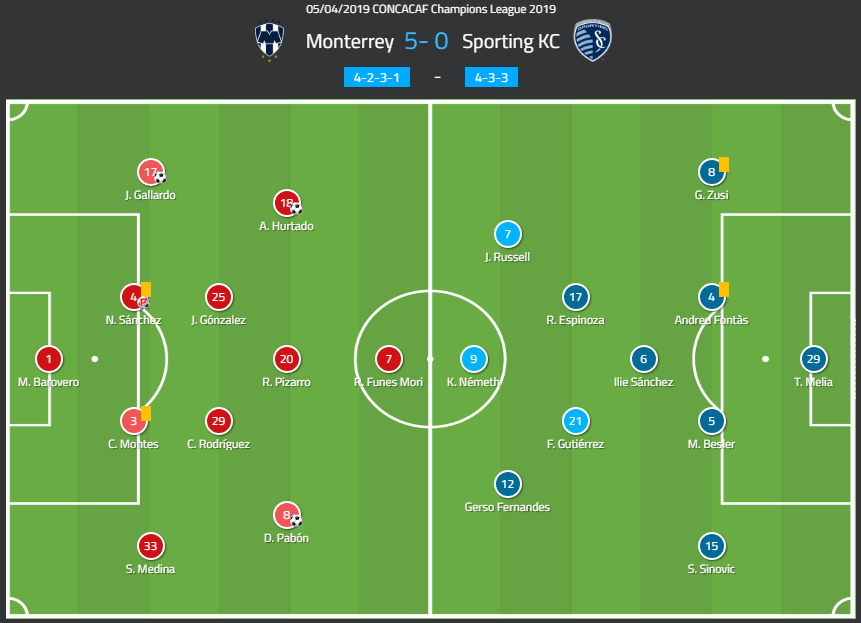 Diego Alonso, the manager of Monterrey, changed three players from the side that drew 2-2 the previous weekend at home to Cruz Azul in Liga MX. In defence, Edson Gutiérrez and Leonel Vangioni were dropped and replaced by Nicolás Sánchez and Jesús Gallardo. Celso Ortiz lost his spot in midfield to Jonathan González.

Peter Vermes made no changes for his Sporting Kansas City side. His side were flying high on the back of a 7-1 demolition of the Montreal Impact at home in MLS, with Krisztián Németh contributing a hat-trick. Former Derby County player Johnny Russell also contributed two goals.

This match provided a clear indication that Liga MX sides are still a class apart from MLS teams. We will look at how Sporting Kansas City attempted to press high up the pitch, as well as the ways in which Monterrey were able to play through this press and tear KC apart. We will also examine how Monterrey defended to deny any clear chances to the visitors.

Sporting Kansas City try to press, but instead get shredded

In MLS, Sporting Kansas City are known as a side who press high up the pitch and controls possession to suffocate their opponents. This was shown the previous weekend when they destroyed Montreal Impact. With 54% possession, Sporting Kansas City created six big chances, and nine shots on target. Montreal were limited to only one big chance from just two shots on target.

In the image below, we see that the ball has gone out to Monterrey left-back Gallardo. His passing options are limited as Kansas City have him trapped along the touchline. As a result of this pressure, Kansas City win a throw in.

As we can see in the images below, this is one of Monterrey’s best counter attacks. Monterrey recover the ball deep, near the corner flag. Kansas City are in a poor position to counter-press, outnumbered 4-2 in the area. The ball is played up the touchline to Pizarro, who plays a one-touch pass into the middle of the pitch for Pabon.

Unfortunately, the right-winger slips but Rogelio Funes Mori is also coming short and receives the ball. He lays it off for González who can play it forward to Hurtado in space.

The ability of Monterrey to play quick one-touch passes allowed them to move through the MLS team’s press easily. One of the obvious differences between the Liga MX side and the MLS side was the on-the-ball abilities of the defensive line.

In the image below, we can see Nicolás Sánchez play a line-breaking pass through the midfield to Pizarro. Pizarro is in space behind the midfield press, and he can turn with the ball to attack.

Sporting Kansas City, on the other hand, didn’t have this ability in their backline. In the image below, we can see Németh making a clever run into the right channel, but Graham Zusi is unable to get the ball to him. Zusi dithers on the ball, and by the time he spots the run and attempts to make the pass, he is closed down and the ball goes out for a throw in.

Where did the Sporting Kansas City attack go?

As Monterrey took apart Sporting Kansas City’s defence, it was even more impressive how Monterrey shut down a dangerous SKC attack that scored seven goals in their last game. Unlike the MLS side, Monterrey didn’t try to press high up the pitch. They sat in a medium-low block and didn’t engage Kansas City until the ball came into the midfield.

With the lack of ball-playing defenders, this was a good strategy on the part of the Liga MX side. The midfield of Sporting Kansas City had poor structure, with Ilie Sanchez sat very deep, near the centre-backs to escape Monterrey’s pressure. Monterrey did well in congesting the middle of the pitch and forcing Sporting Kansas City out wide.

As we can see in the image below, Sporting Kansas City are attacking down the wing with no presence in the middle of the pitch. There is little connection between the defence and attack.

If Major League Soccer is using the CONCACAF Champions League to judge the quality of their league against regional powerhouse Liga MX, it appears they still have a way to go. The quality of Monterrey was too much for Sporting Kansas City, as they were able to easily play through their press. Monterrey were also able to shut down an attack that had rampaged through Montreal a few days earlier.

After shredding the MLS side, Monterrey went to lose 5-1 at Toluca three days later. The fact Monterrey could dismantle an MLS team so completely, and still be destroyed by better Mexican clubs doesn’t bode well for the MLS.