As the MLS playoffs continued, two teams from each conference battled to make it to the MLS Cup final. In the Eastern Conference, two founding members of the league squared off, with Columbus Crew hosting the New England Revolution. This was to be the first meeting between the teams this season.

The Crew, led by Caleb Porter, were looking to close out their season at home with another win. Having won 11 of 12 games at home, Columbus has turned MAPFRE stadium into a fortress. Attempting to reach their third MLS Cup trip in club history, the Crew were also the only top seed left in the Eastern Conference playoffs.

New England has been on the receiving end of good things during the playoffs. Having been without captain and talisman Carles Gil, the Revs had not only gotten him back from injury but had also hit a solid run of form. Although Bruce Arena’s side was the eighth seed, they played like a top seed.

At the end of a fantastic playoff match, the Columbus Crew were able to end New England’s season. This tactical analysis will take a look at the slight shift in Porter’s signature attacking style and how New England suffered defensively.

Porter retained the same starting 11 that played against Nashville SC. Lucas Zelarayán would play primarily as a 10 while Gyasi Zardes stretched the defenders vertically as the target man. Again the Crew would rely on their attacking quartet of Santos, Zardes, Zelarayán and Díaz to provide creativity in the attack. Andrew Tarbell continued to brilliantly deputise for Eloy Room, who was still unavailable for selection. 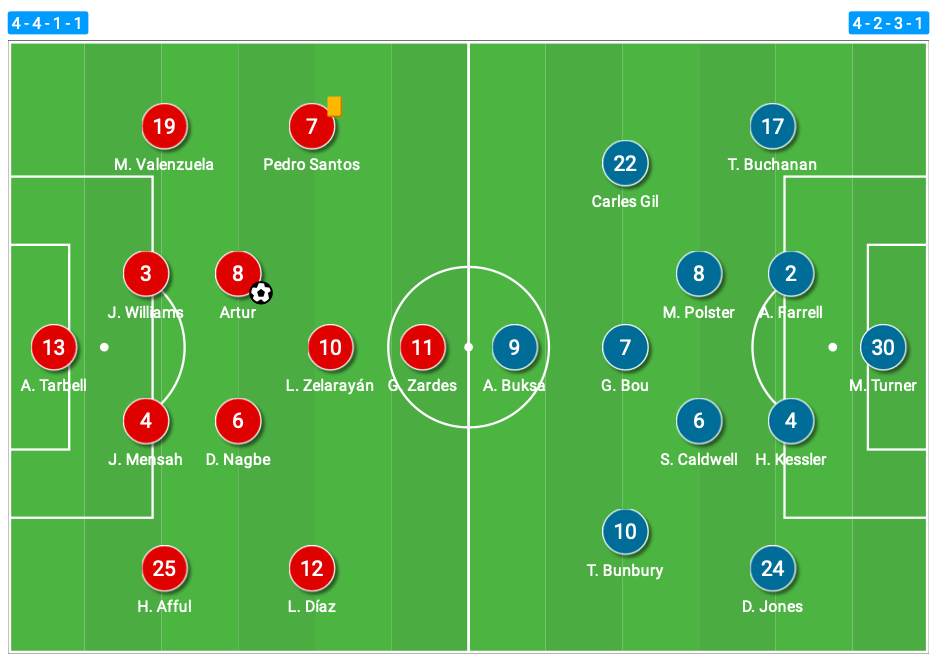 Arena also fielded the same team that defeated Orlando City. New England looked to Gil to add to his attacking output. Having scored one goal and assisted three, the Spaniard has been in talismanic form for the Revs. They would also look to Gustavo Bou and Teal Bunbury to add in the goals department as well. Canadian winger Tajon Buchanan started at right-back once again, as Arena looked to utilize his pace and combine with Gil.

The Crew’s fluidity in attack

Columbus has bought into Caleb Porter’s playing style. Similar to Guardiola’s stints at Man City and Bayern Munich Porter’s teams have always looked to control the game with possession. At Columbus, he has done this by giving his players plenty of mobility.

Against the Revolution, this can be seen with the front four and their movement to create space for one another. Below we see how Zardes has taken the ball wide, drawing the New England right back with him. This tactic has created acres of space for Valenzuela to dribble into once he has received the pass. 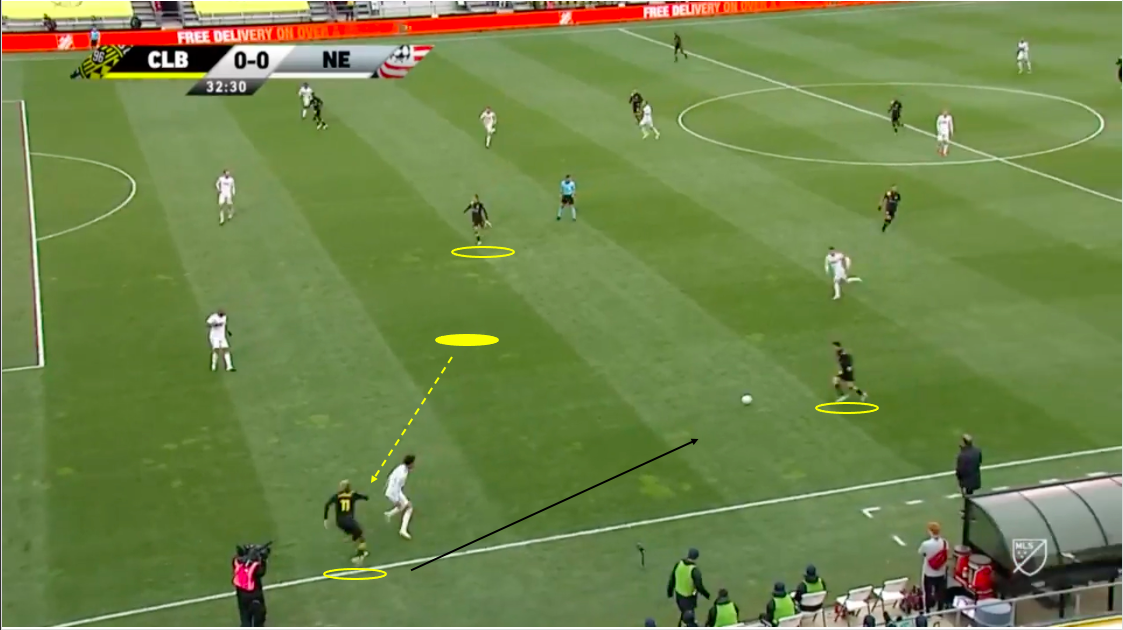 In the following image, we see how Santos has moved into the centre since Zardes and Valenzuela occupied the wide-area and halfspace. Due to the New England centre backs holding their line, the Portuguese playmaker is able to receive the ball comfortably and shoot. 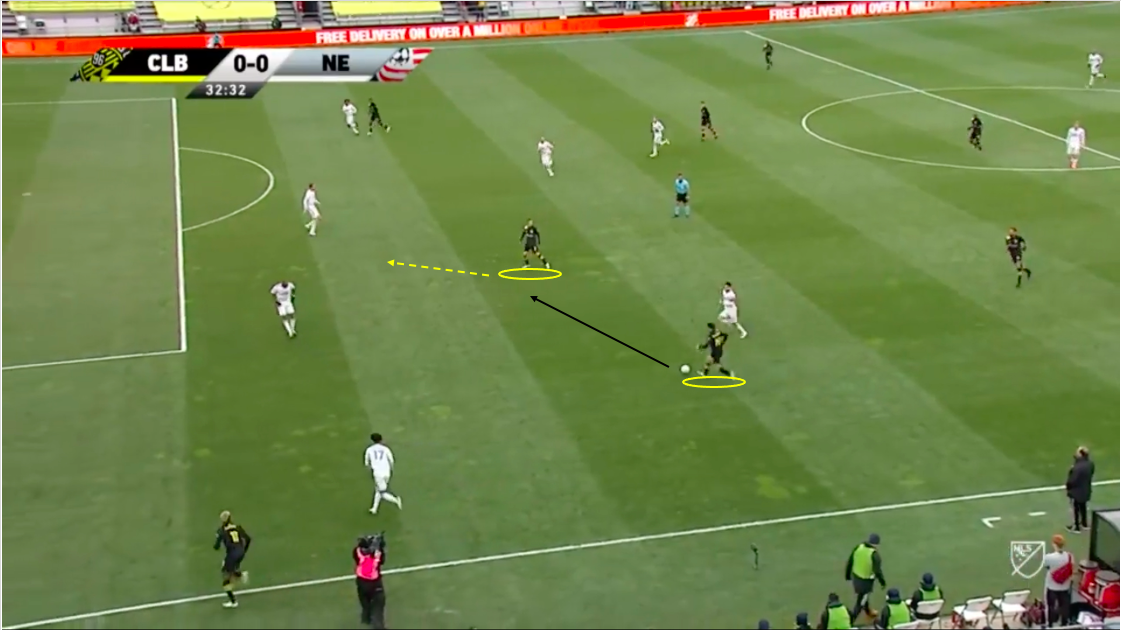 This mobility extends to the double pivot as well. Typically Artur will drop between the centre backs to build with three, while Nagbe floats in the centre. If one has space, he will dribble into it to attract defenders. 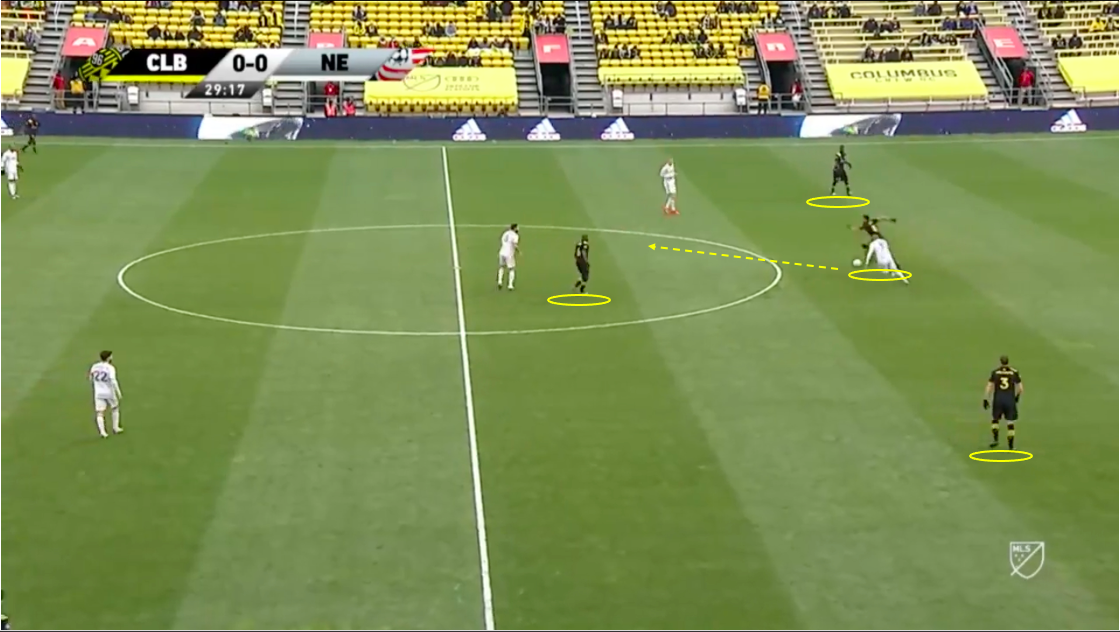 While that happens, the other midfielder would drop slightly to provide support and balance the counter defence. 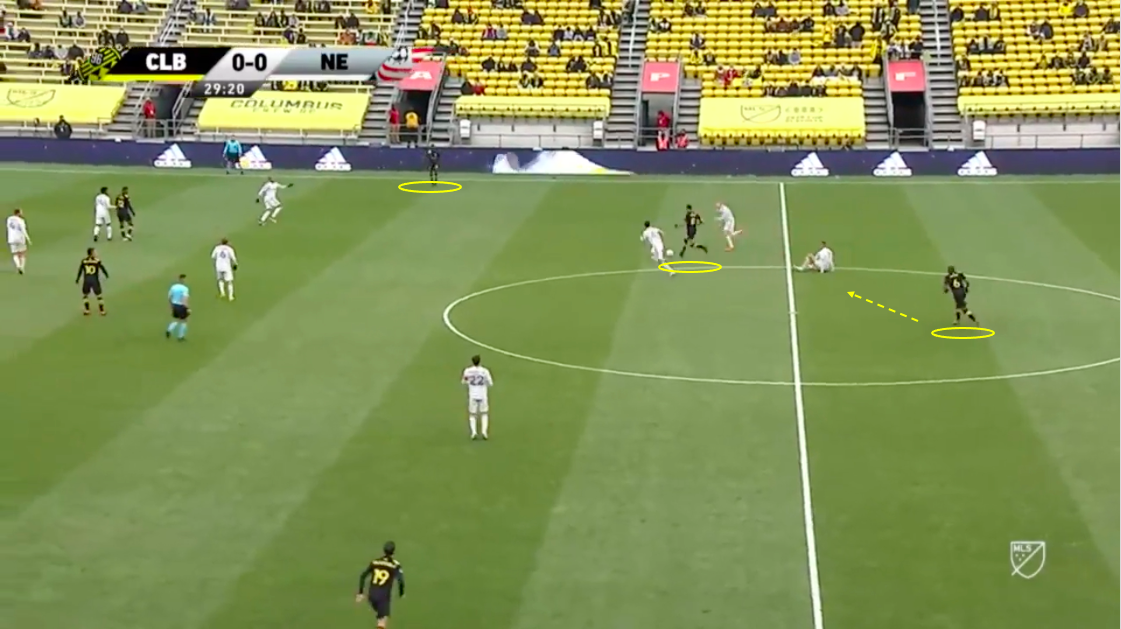 While the Crew had to shift tactically and play more direct, their main principles of mobility remained. In the following section of the analysis, we will look at how New England struggled to contain the Crew’s attacking phase.

New England’s biggest flaw defensively was their lack of compactness. This allowed Columbus to break their lines easily. In the example below, we can see the large amount of space given to Darlington Nagbe. 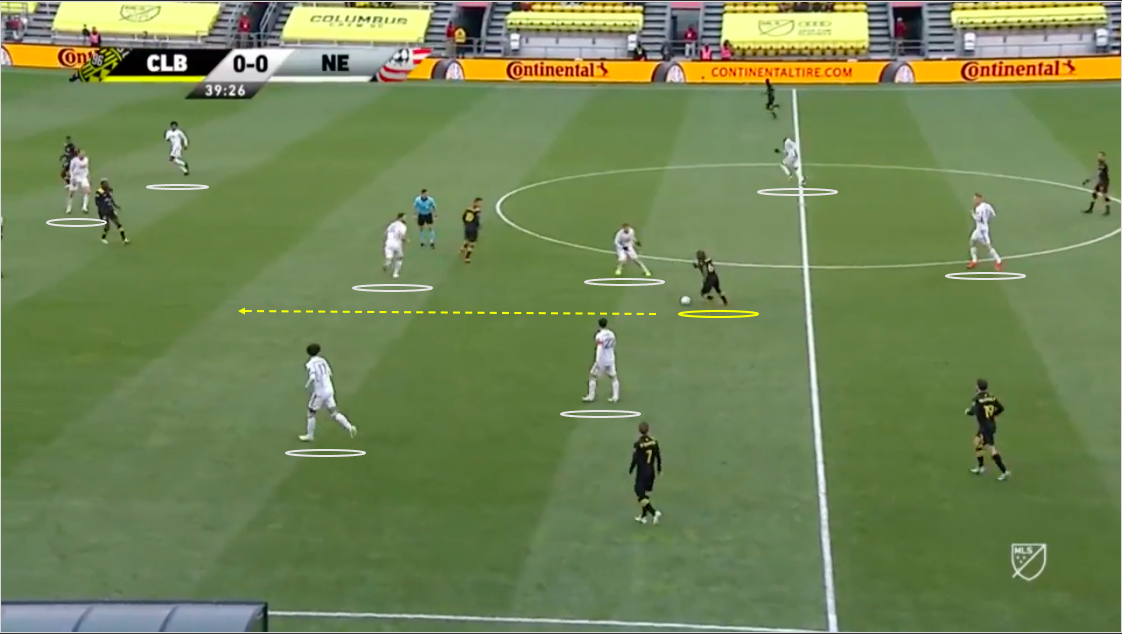 The Columbus midfielder is able to dribble past four players and attempt a through pass to Zardes once he gets close to the penalty area. Immediately following that play, we see Columbus centre back Williams not being pressured by Gil. 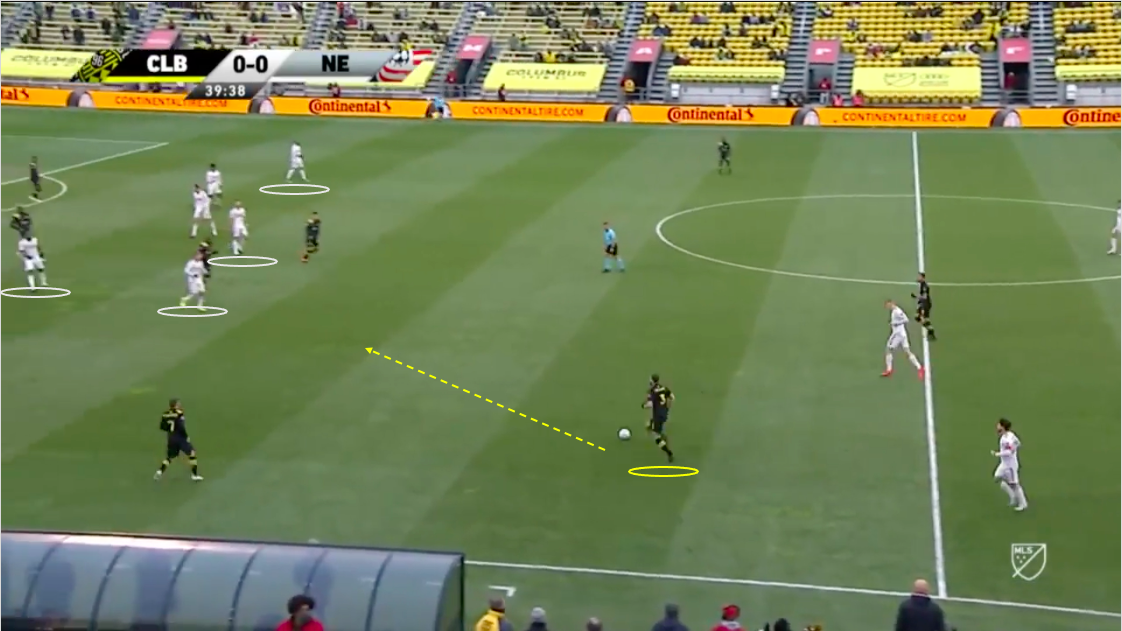 Again we can notice the massive gap between the lines, which allows Williams to dribble at the first line of defence. New England also allows the centre back to arrive near the penalty area under little pressure. While his pass to Zardes results in an offside, the Revs lack of compactness let Columbus make the same exact play twice in less than a minute. 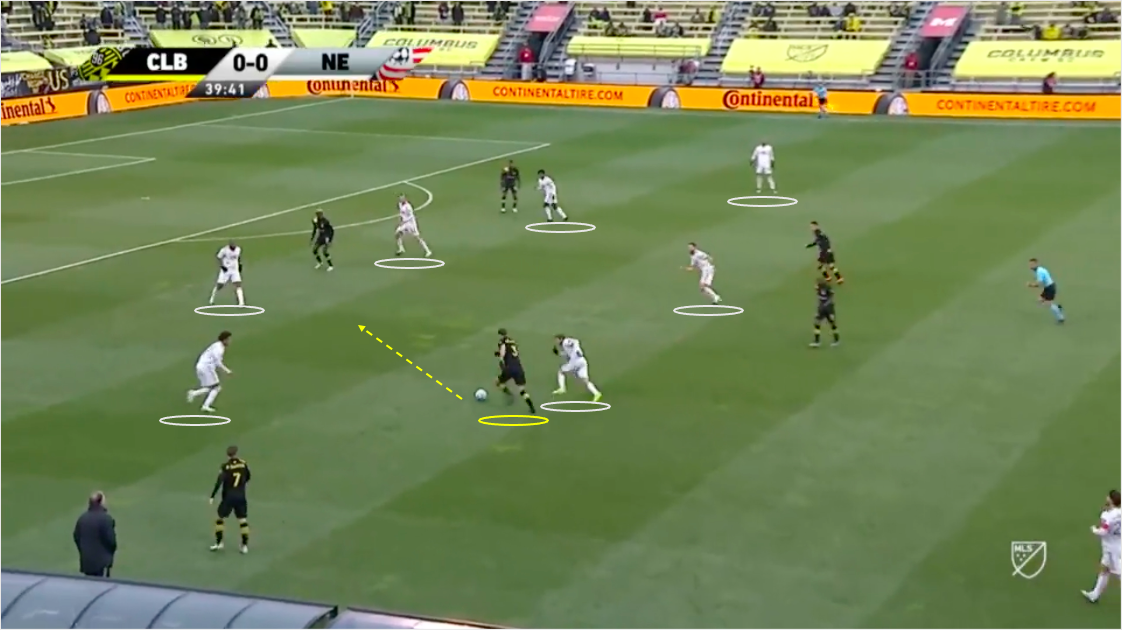 This defensive spacing played right into the Crew’s hand. With their play being more direct, they were able to cut through the Revs defence time and time again.

When not in possession, the Crew were compact and made it hard for the Revolution to play through them. Their defensive patience is evident through their 20 interceptions throughout the match. 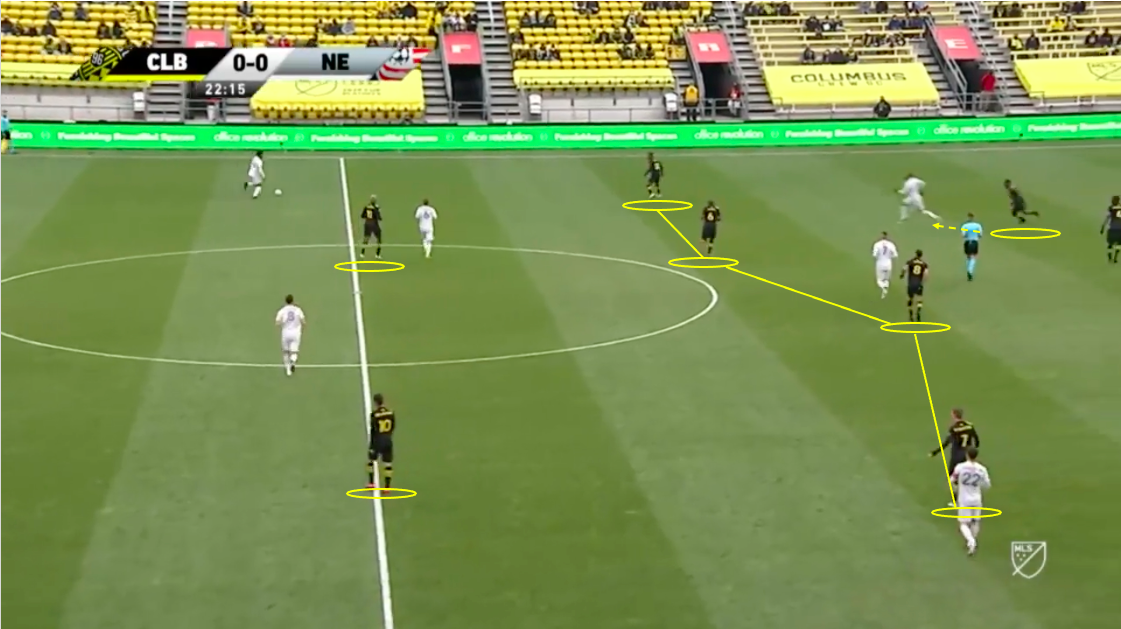 As we can see in the example above, Zelarayán and Zardes are marking New England’s double pivot. This tactic allows the centre backs to cycle the ball across the back four, but it makes it very difficult for short passes through the middle. The rest of the Crew is organized in two compact lines of four. While Afful is tracking the checking New England player, the rest of the team controls the space. 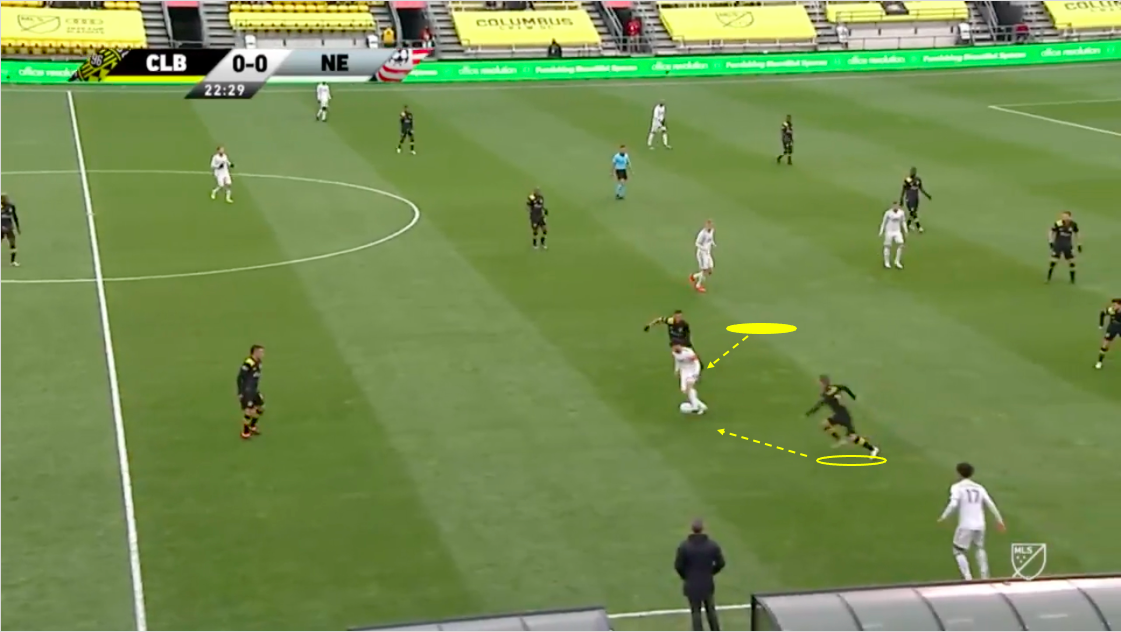 Their press was activated by certain triggers. As previously seen, one pressing trigger was when a player checking for the ball. Another trigger was if an opposition player was receiving a pass and his back was facing the Crew’s defenders. Above we can see Valenzuela and Santos converging on Gil due to his body positioning.

By controlling the space, the Crew were able to force the Revs into playing high risk long passes. This allowed Columbus to make 35 recoveries throughout the middle third.

The Revs looked to use the width to their advantage. With Buchanan pushing higher on the right, Gil was able to tuck inside into the halfspace. This allowed the Spaniard to stay closer to Bou so the two could combine in the final third. 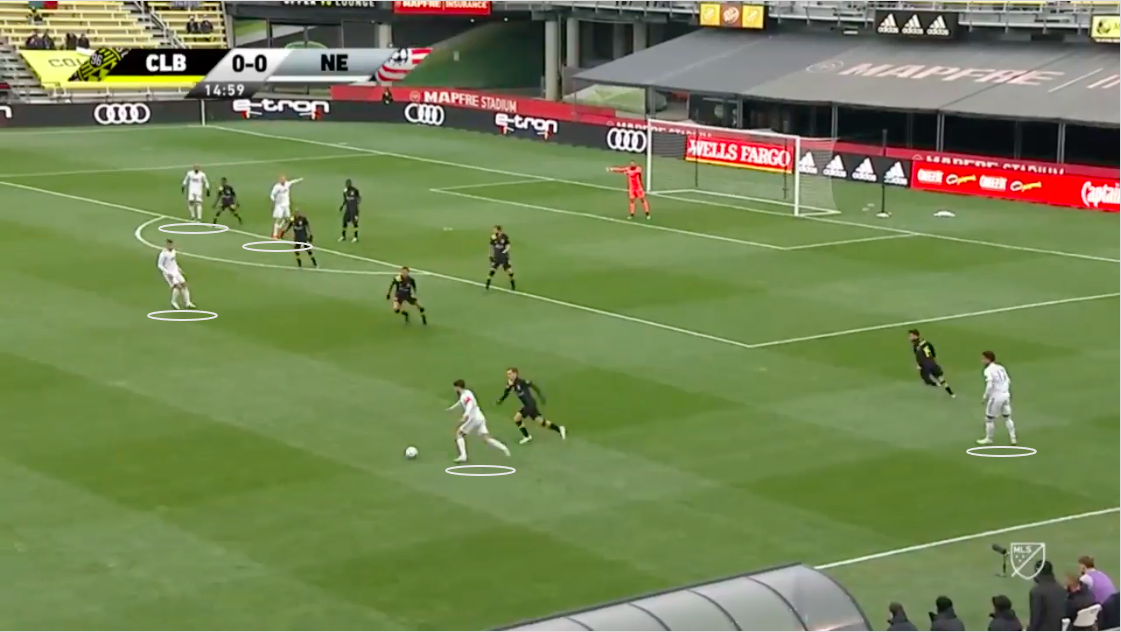 Above we see an example of this tactic. Using Buchanan to pull the defender out of position, Gil is isolated with a defender. Bunbury and Buksa move into the box, which keeps defenders away from Bou. 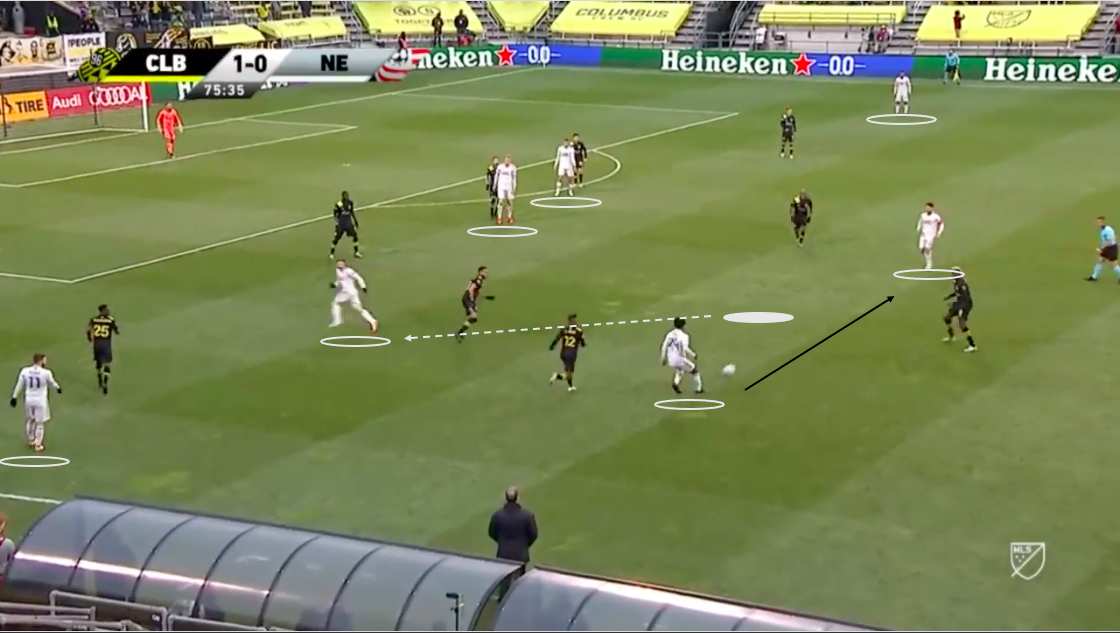 Due to McNamara’s forward run, Gil is able to receive the ball in a pocket of space. In this example, Bou has pushed into the box with Buksa, while the right-back Bye provided the width on the opposite side.

The Crew were able to shift their attacking approach to maximize their time on the ball, while the Revs main attacking threat became their biggest defensive liability. Although the Revs had their chances, their defensive phase allowed Columbus to control the tempo of the game. New England will rue their missed chances, while the Crew will be delighted to have made the final after controlling the game.