Manchester City were at their scintillating best when they met Shakhtar Donetsk on Tuesday night in the UEFA Champions League. City romped to a 3-0 victory, in the process becoming the first English side to win away at Shakhtar. In our tactical analysis today we will look at Manchester City’s performance and the aspects of their game which led to City brushing aside their Ukrainian counterparts.

In truth, this was the most typical of typical Manchester City performances under Pep Guardiola. City set up in their familiar 4-3-3 with a slightly tinkered side from their 5-0 victory over Burnley in the Premier League. 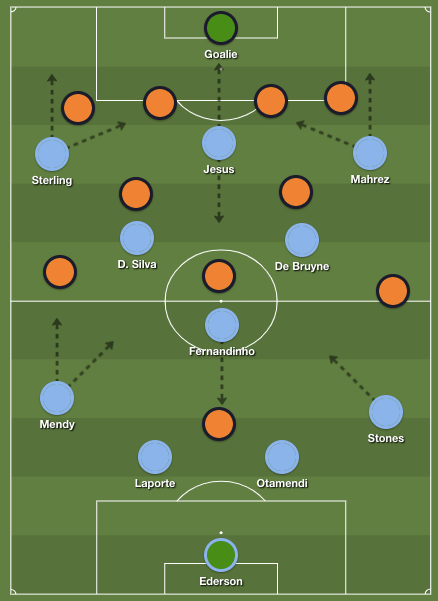 John Stones continued at right-back, with Nico Otamendi coming in for skipper Vincent Kompany. Sergio Agüero was afforded a much deserved rest with his understudy Gabriel Jesus getting the nod. Leroy Sané dropped out for Raheem Sterling who was rested vs Burnley and the final change was the long awaited return to the starting lineup for talisman, Kevin De Bruyne. The arrows on the tactics image highlight the typical movements the players made and as such the City set-up resembled the following: 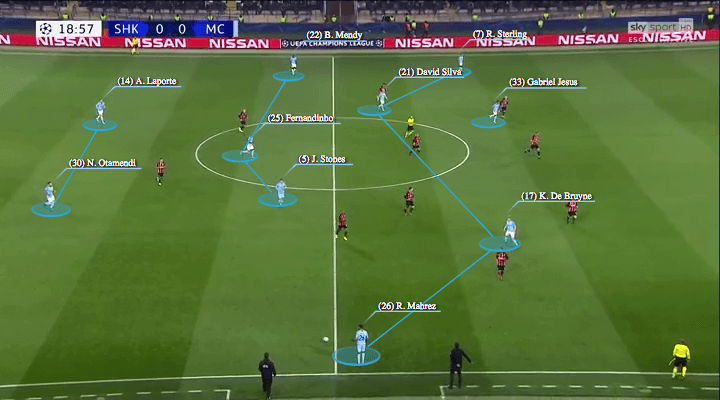 For me, this game was won by Manchester City in the first half. This may sound obvious as the blues went into the half-time break 2-0 up and it is very difficult to peg Manchester City back when they take the lead, but the way in which City broke down Shakhtar in both a footballing sense and a mental sense, the Ukrainian Champions were already beaten when the clock hit 45.

At this point in time, Manchester City’s counter-press is the best in world football. In the first half of the game Shakhtar Donetsk were simply unable to get out of their own third as City harassed and hounded them the instant they gave a sloppy pass or miscontrolled the ball (which didn’t happen all that often). Below is an early example. 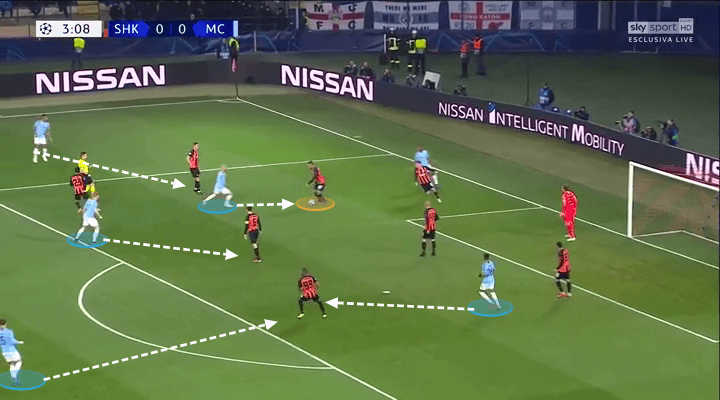 Here we can see that City have surrendered possession inside the Shakhtar box and their first thought is that they must pressure their opposition. The players work hard to cover the nearest passing option, forcing the defender to clear the ball long. 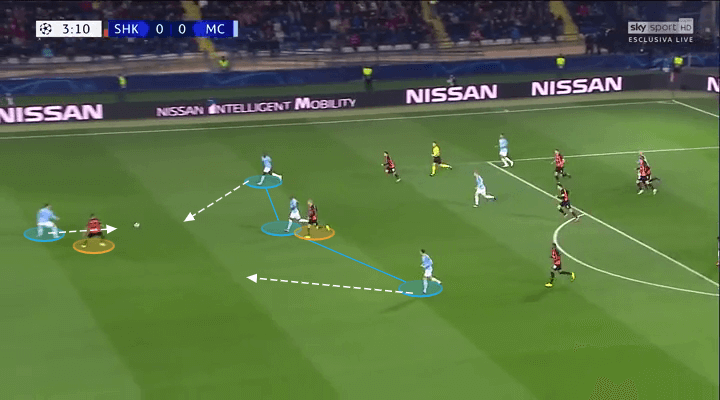 When the defender does clear the ball long, it’s towards a very isolated striker. Fernandinho, Mendy and Stones have intelligently positioned themselves narrowly so that they can quickly scoop up the loose ball should it be knocked down. Laporte is on the front foot and gets in ahead of the Shakhtar Donetsk forward. Otamendi is off-screen but his more conservative position allows Laporte to be aggressive as has the pinning back of the Shakhtar wingers by the inverted positions of City’s full-backs.

Below is an example of a slightly different press that City also used effectively. 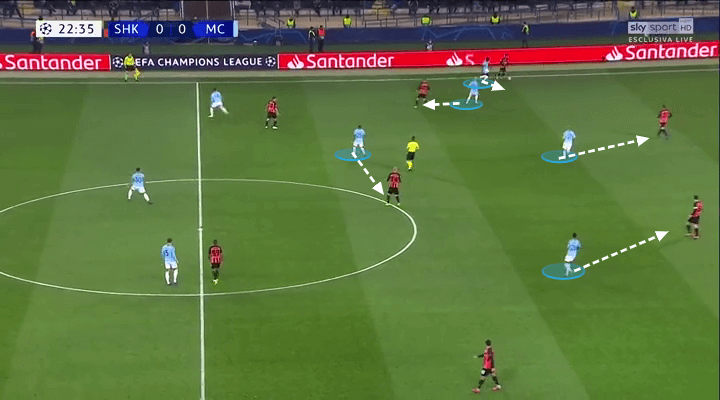 On this occasion the ball ended up in the Shakhtar Donetsk goalkeeper’s hands and he has looked to spring a quick counter attack, however, Manchester City were wise to this. The City men again close in on their man whilst also using the touchline as an additional defender. When the right-back takes a backwards touch, Mendy pounces and as all his passes are cut off, the Manchester City full-back nicks the ball and eventually finds Mahrez on the far side whose shot is cleared off the line.

For me it was less so what City did with the ball and more what they did without the ball that led them to this impressive victory in the Champions League. When Shakhtar Donetsk visited the Etihad stadium in the tournament last year they impressed everyone including Pep Guardiola who believed they were one of the best sides Manchester City played all season. Having scored four goals in they’re opening two games when City had only managed three it was clear that Guardiola felt that City’s ability to restrict Shakhtar’s attacking potential was the key to a result here and his plan was successful. Shakhtar were only able to muster 0.57 expected goals according to Wyscout.

Things had been looking slightly ominous for Manchester City following they’re lacklustre performance against Lyon on the opening day of the Champions League and when they needed a late winner to overcome Hoffenheim. But following this victory in Ukraine, City now top the group thanks to a late Hoffenheim equaliser against Lyon. With two of City’s three remaining group games taking place at the Etihad Stadium it would be fair to say that the blues should secure a place in the next round of the Champions League.

The final matchday of the 2019/20 EFL Championship is here. No side has officially been relegated yet, and second place […]

Another interesting game in the UEFA Champions League 2019/20, where all teams are in Lisbon and no one would want […]