Barcelona welcomed Atlético Madrid to the Camp Nou on Tuesday evening knowing that anything but three points would likely all but put an end to their hopes of fighting back in the title race against Real Madrid in La Liga. Diego Simeone’s men arrived in fine form with four wins and a draw since the restart and inevitably they would hold out for a draw, which does Quique Setién no favours as the pressure on him heats up.

In the first half, Diego Costa inadvertently spilled the ball into his own goal from a corner and then missed a penalty kick after Arturo Vidal brought down Yannick Ferreira Carrasco, only for VAR to indicate that the penalty should be retaken with Saúl not making the same mistake. Lionel Messi would convert the next penalty at the other end as Felipe brought down Nelson Semedo, who would return the favour by tripping Carrasco to allow Saúl to equalise in the final goal of the night from yet another penalty.

This tactical analysis will provide an analysis of the tactics of both Barcelona and Atlético Madrid in this crucial La Liga fixture which will have a huge influence upon the title race in Spain. 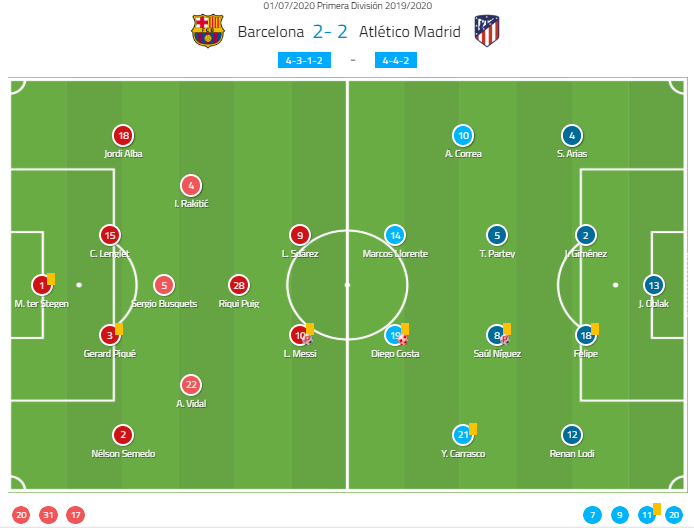 Setién provided a surprise with his Barcelona line-up as he gave a start to youngster Riqui Puig, with neither Antoine Griezmann nor Martin Braithwaite selected, the latter having failed to make the desired impact in a similar tactical battle against Sevilla recently. This meant a four-man midfield with Puig operating at the peak of the diamond.

Simeone opted for Marcos Llorente in attack as a second striker for Atlético Madrid, with Ángel Correa and Carrasco providing a surprisingly offensive-minded midfield set-up. Without Koke due to suspension, Saúl lined up alongside Thomas with Correa and Carrasco on the flanks. The suspension of Stefan Savić also allowed Felipe to return following a spell on the sidelines through injury.

Something which we have been seeing more and more of since the break from Atlético Madrid has been a high press, driven by Marcos Llorente. This new approach has worked well and it was deployed against Barcelona too, at specific times usually as they looked to move the ball into Atlético’s half or final third. As can be seen here, Correa presses high with Llorente pressing as soon as Sergio Busquets plays the ball to Clement Lenglet and Diego Costa cuts off the passing route to Gerard Piqué.

Ultimately it worked as Barcelona became more sloppy in possession at the back, being hurried and rushed into quick passes to move the ball out of the danger area. Only a minute after this scene, such a sloppy pass would see Carrasco counter-attack and Vidal bring him down to concede a penalty.

This led to 26.38% of Atlético’s defensive duels taking place in the opposition half as Atlético looked to pick and choose when to make Barcelona more nervous in defence, where they looked shakey and lacked confidence throughout, while at other times sticking to a more rigid, low block defensive unit which allowed Barcelona possession if it did not pose a threat.

As touched upon, in order to fully benefit from the threat created by the counter-attack, Atlético needed an attacking outlet who could quickly transition the ball forwards. While that has usually been Correa this season, against Barcelona it was Carrasco who took up that role. His pace and dribbling was a major threat for the first time since he rejoined the club on loan in January, after a slow start had seen him accused of lacking fitness following time in China.

He proved doubters wrong as he completed four progressive runs – his most since returning to Atlético Madrid, and five dribbles. What’s more, two of those ended with a penalty being awarded to the visitors who were struggling to handle Carrasco’s direct style without sufficient cover from midfield as Carrasco broke on the counter.

The Belgian was also intelligent in his movement. Rather than always bombing down the left flank as he did on the first occasion, winning a penalty after being fouled by Vidal, he would later look to drift centrally. This opened up space for others, such as Renan Lodi or Saúl, to move forward into an open space as Semedo tracked his man into the central areas as he sought to catch up with play.

Atlético Madrid set up with a very clear defensive purpose when sitting deep, which was to operate with a rigid low-block, usually formed of five men, with a ring around Messi between three central midfielders in narrow positions, and Costa and Llorente pressing further up ahead of Messi to prevent the passing routes.

This can be seen in the example above as Sergio Busquets comes onto the ball and has very few options. It explains why the side registered 282 lateral passes, compared to a season average of 264, and were continually found failing to exploit spaces.

This, in turn, influenced the attack: the average shot length was 18.8 metres, compared to 17.37 as a season average, showing how Barcelona grew frustrated as they failed to find a way through. Messi free-kicks and attempts from the edge of the box were the best way to find any kind of threat, as shown by the fact that the two goals scored by Barcelona came from a corner and a penalty. Once again, creating opportunities from open play has proven difficult for Setién’s team.

When Atlético did sit deep, one of their most intriguing aspects tactically was that Correa would drop deep into a role almost as a right-back. This would allow him to closely track Jordi Alba and prevent him from running at the more vulnerable Santi Arias. Instead, Correa used his pace to almost mark him on a one-to-one basis and prevented Alba from exploiting the wide spaces with his pace. With just 75 total actions, his lowest all season other than the Clásico against Real Madrid at the Estadio Santiago Bernabéu, the left-back was nullified.

It also allowed Arias to move in to operate as a third central defender. This was effective as it reduced the spaces available even more so, with Filipe, Giménez, and Arias not allowing Suárez any space and even the likes of Messi struggled to operate with so few openings in the Atleti backline which operate very tightly.

It was not a symmetrical approach on the other side though. Lodi did move wider as a left-back to track Semedo, possessing the pace to challenge him, unlike Arias on the right. However, he was more disciplined and was not as detached from the rest of the defence, moving in to form a four-man central unit when the ball did go over to the right, with Arias supporting Correa defensively.

It was clear that Barcelona needed to make changes and one change which Setién did make was to bring back a tactic which was seen in some of his earlier games in charge. It involves deploying Ivan Rakitić in a deeper role, in which he would drop into the back three on the left-hand side. By doing so, he would operate more akin to a quarterback, allowing Busquets greater freedom to move forwards.

This clearly had an impact on how the Croatian influenced the game as he registered just 10 forward passes, compared to 19.3 as a season average, but he was more selective, completing all five of his passes into the final third. It also reduced the impact of Atlético’s high press, with Rakitić being able to provide another passing option and a superior range of passing, picking out long passes with greater accuracy than Piqué or Lenglet.

Crucially, it also allowed Busquets to step up. The holding midfielder has proven to be more efficient in link-up play, particularly alongside Puig and Messi, and does not look to attack the same spaces as Rakitić sometimes does. Rather than looking to get into the final third, Busquets would instead hold off on the edge of that space and look to play a pass into space.

Overall, this was a clear case of Diego Simeone winning a tactical battle with a few simple approaches. Bolstered by the options he had at his disposal, Carrasco’s pace and Correa’s discipline out wide allowed Simeone much greater tactical flexibility which allowed his team to range from rigid and structured defensive play to a fluid counter-attack.

Barcelona lacked any such adaptability and continued to look turgid and devoid of ideas regularly. Puig brought some diversity to their passing as they looked to find a way through, but inevitably the Atlético system of a low block and denying space to Barcelona attackers worked well.

This was a test that Barcelona could not afford to fail and while it was eventually penalties and set pieces that would decide the result, a lack of creative incision from Barcelona, and more of it than expected from Atlético, was really what settled the tie.