The Italian title-race was thrown wide open on Sunday night when Napoli’s centre-back Kalidou Koulibaly powered a header from Jose Callejon’s corner into the Juventus net to give Napoli a 1-0 win in Turin. Only a solitary point separate Juventus in first from Napoli in second with four games to go. The game itself was a very even contest with two strong defences going up against each other and restricting the other team to few opportunities. Let’s take a look at the main tactical aspects of the game.

Maurizio Sarri didn’t surprise and chose his trusted 4-3-3 with Jose Reina in goal, Elseid Hysaj, Raul Albiol, Kalidou Koulibaly and Mario Rui in defence, Jorginho as the deepest midfielder behind Allan and Marek Hamsik while the front-three as always was Jose Callejon, Dries Mertens and Lorenzo Insigne.

All through the game, Juventus had trouble to build attacks efficiently and that was largely caused by Napoli’s superb pressing. In their 4-5-1 defensive shape, centre-forward Dries Mertens would start the press against one of Juve’s centre-backs while the ball-far winger would then push up to create a front-two when pressing against Juve’s two centre-backs. The remaining four midfielders then created a four-man midfield behind the front two and pushed up to give the first line of pressure sufficient backing. This created a very compact Napoli side high up the pitch and minimized Juve’s space when trying to build up.

As you see below, Mertens has started the press against Benatia who’s played the ball across to Chiellini. This is Callejon’s cue to press the Italian and a pressing front-two is created. Note the proximity of the midfield line behind the initial press to deny Juve space to get out. 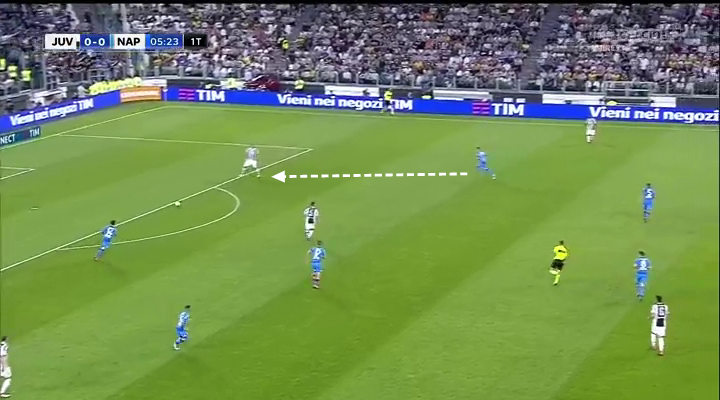 Below is another example of the press as Callejon this time starts the press against Benatia with Mertens anticipating the pass to Höwedes and sprinting towards the German. Again note the superb positioning of the midfield behind the front-two to create a stable second line of pressure if the first press is broken. 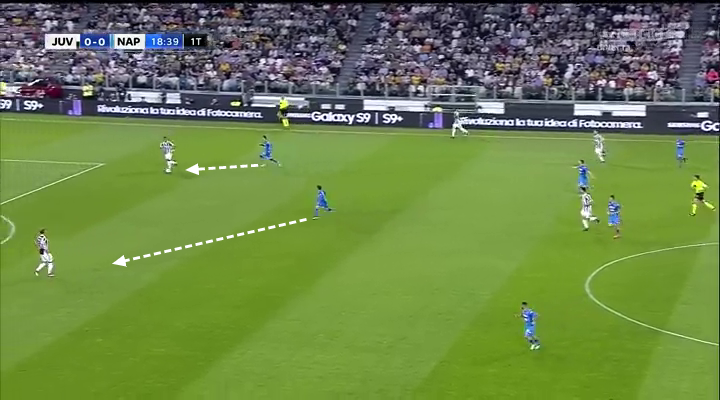 This positionally-orientated pressing from Napoli is one of their greatest assets and a key behind how they manage to dominate the ball in every game they play. As we’ll see below, they are brilliant at maintaining a compact shape regardless of whether the ball is which is one of the focuses of a positionally-orientated defensive style where the position of your teammates and the ball determine how the team moves.

By contrast to Napoli’s approach, Juve pressed with clear man-orientations. They wanted to stop Napoli from building attacks from the back and force them into longer balls against their short front-three. Below is an example of this approach as Pjanic joins the front-two of Dybala and Higuain to mark Napoli’s outlets in their build-up. With Reina in possession, Juve withdraws his options to start the attack with a short pass and prevents Napoli from initiating a stable build-up from the back. 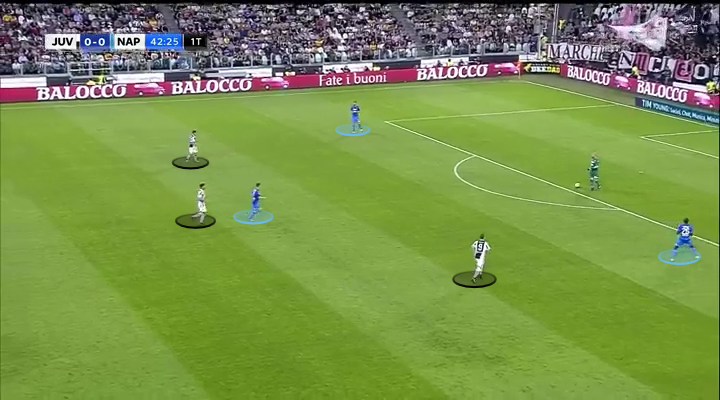 Here is an example from a larger perspective as we can see how man-orientated Juve were in their attempt to disrupt Napoli’s build-up play. They man-mark every player in Napoli’s half to force Reina into a long pass. 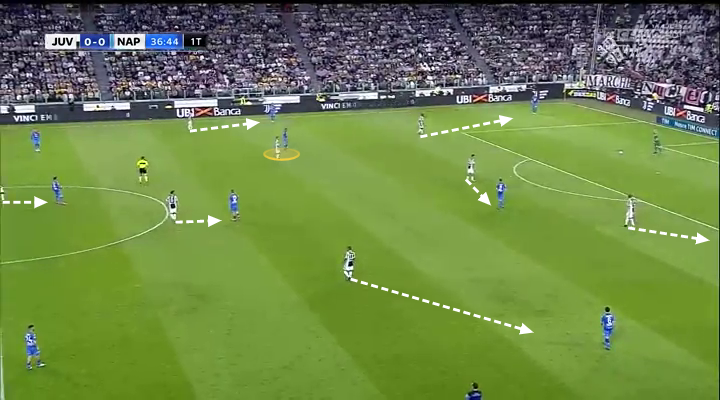 On the occasions Napoli had the ball in possession and Juve couldn’t press, they steered them towards the wide areas and looked to overload around the ball to win it back with Napoli exposed. One example of this approach can be seen in the image below. However, while it did lead to a couple of turnovers, Juve didn’t create any dangerous chances from this approach. 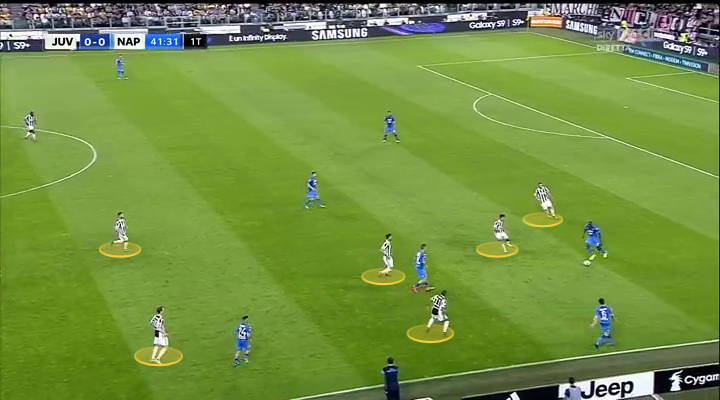 It wouldn’t be Napoli though if they didn’t find ways out of Juve’s pressure. The main method they use, as always, was bounce-passes into higher positioned players, often Allan or Hamsik, who would then lay it back to players behind them such as Jorginho. One example is pictured below when Koulibaly plays a pass into the marked Hamsik who lays it back to Jorgino who has lots of space and can then progress the play forward or to the other side. 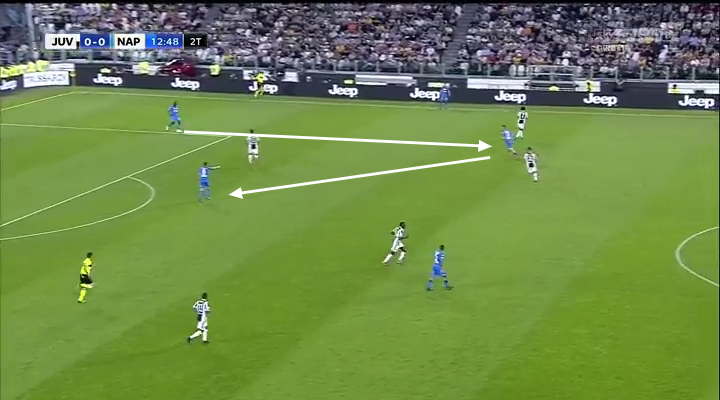 Another way they managed to break the press was through the intelligent positioning of Hamsik who often stayed on the blindside of Khedira who often got attracted to the ball and forgot about the Slovakian he was supposed to mark. The two images below highlights how Napoli break the press through Hamsik’s positioning. 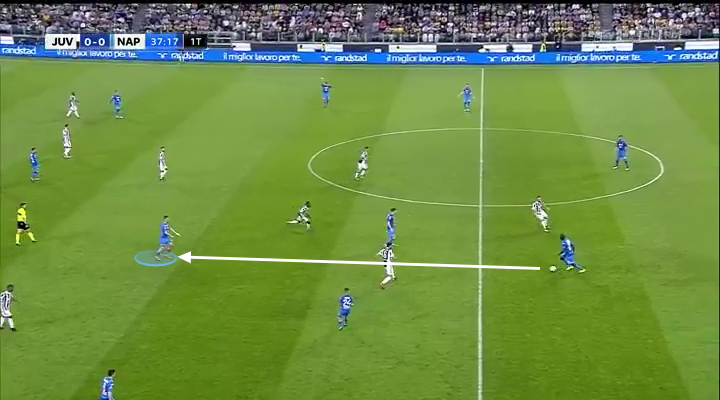 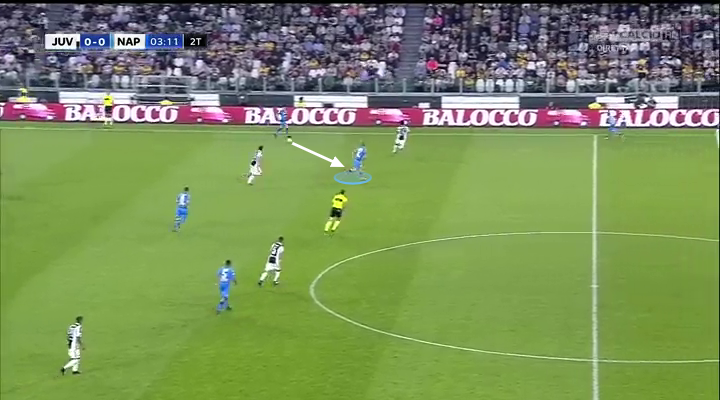 So, while Juve’s press limited the number of times Napoli could build up attacks as they would have liked, the away side managed to break through the press on multiple occasions due to their strong organization in the possession and intelligent positioning of players like Hamsik.

Despite often getting out of the press, Napoli struggled to create chances because when they got out of the press, Juve were quick to re-organize in an extremely compact 4-4-1-1 and denied space between the lines where Napoli always look to get in. This led to Napoli dominating possession for most of the match but Juve also allowed them the ball as it was largely kept in front of Juve’s midfield or in wide areas where Juve were happy for the ball to be due to Napoli’s lack of a threat from crossing.

Below is an example as Napoli have the ball under control but are met with a wall of eight Juve players who prevent the central breakthrough Napoli are looking for. 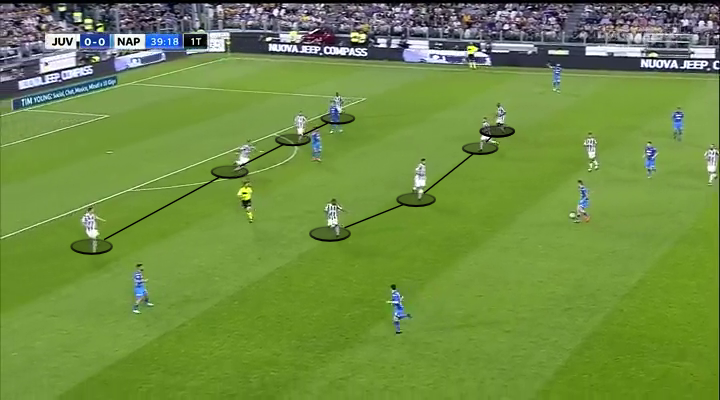 As mentioned, Juve looked to steer Napoli into the wide areas due to the lack of an aerial threat posed in the box by Mertens, Insigne and Callejon. It’s clear to see in the image below with Costa staying centrally and allowing the pass to go wide. 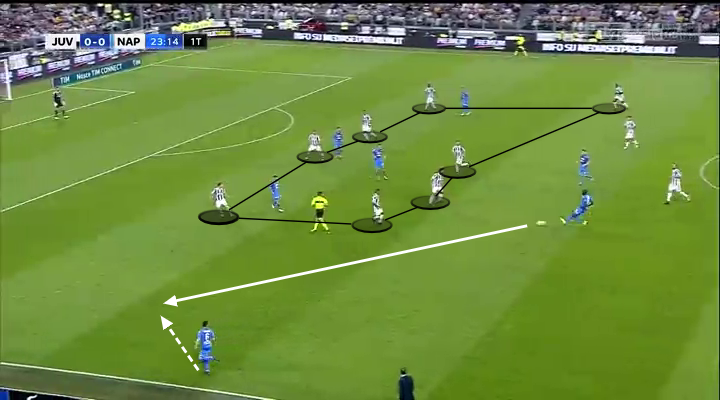 Here is an example of Juve’s defending with the ball wide with a strong overload and close distances between the players to stop Napoli from getting into dangerous areas between the lines of Juve’s defence and midfield. Instead, they’re forced backwards and are again met by two banks of four and with no space to break through. 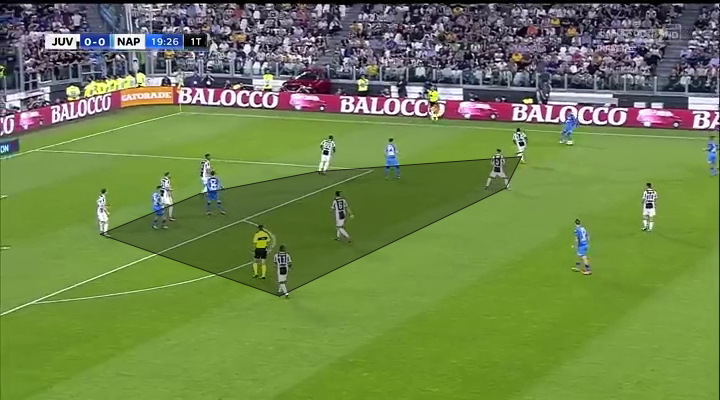 With the lack of opportunities to get in-between the lines of Juve, Napoli tried to reach their front-three in behind with the trademark diagonal runs we’ve become accustomed to from Sarri’s side. Here Insigne looks for the diagonal run of Callejon with Mertens also making such a run, but Juventus were prepared for this and Asamoah, in particular, defended Callejon’s runs brilliantly. 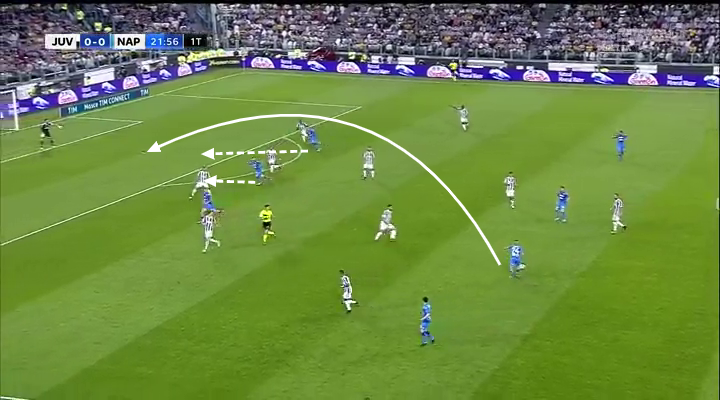 For someone who deploys positionally-orientated defending, it was a joy to watch the way Napoli team moved up, down and sideways in unison throughout the 90 minutes. If Juventus’ had a compact team and set up defensively then Napoli were also just as compact and well-organized. The key was the movement of the back-four who pushed up quickly every single time the ball went backward for Juve. If the ball went back five meters, then Napoli pushed up five meters. It was so synchronized and denied Juventus from basically creating any chances apart from the two set-pieces in one minute in the first half when Pjanic’ deflected free-kick hit the post and Higuain’s half-volley was cleared off the line from the resulting corner.

Look at the body positioning of all the Napoli players below. As soon as the ball is passed backwards they all move up as a unit. Superb. 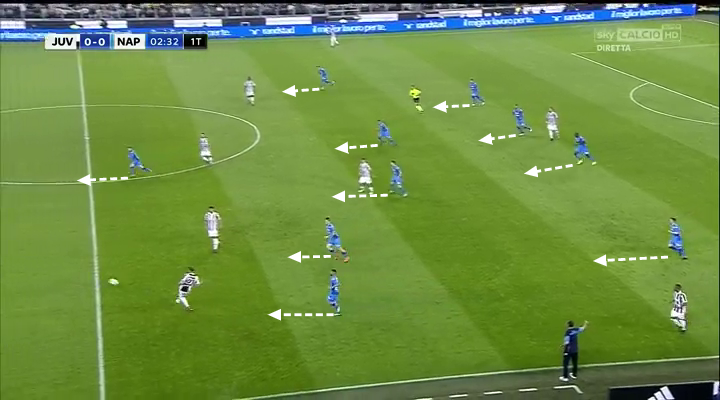 When Juve had control of the ball, Napoli’s shape was so compact that Juventus rarely ever threatened to break through centrally. Look at the distances between the Napoli players below, it’s almost impossible to play through them. 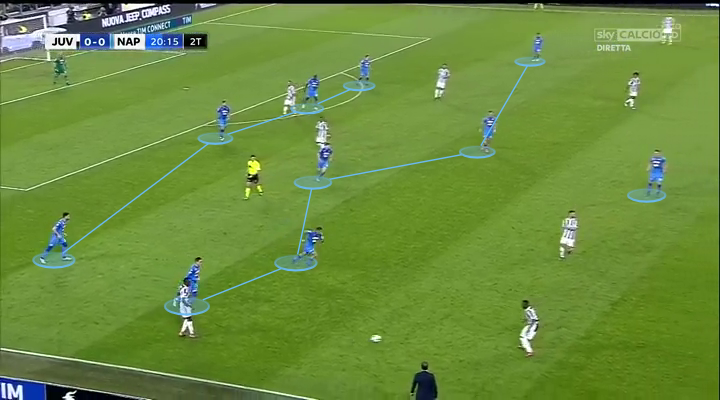 When Napoli are discussed it’s often they’re possession play or the pressing that gets mentioned, but the fact is their low-block defending is fantastic. Their brand of positionally-orientated defending sees them not only dominate the game with the ball but also without it. As it stands, only Juventus (20) can better Napoli’s 23 goals conceded.

A great game between two defensively strong sides saw few chances and it looked like it would finish 0-0 and bring Juventus a big step closer to a seventh successive Scudetto, but Koulibaly’s header in stoppage time gives Napoli a fighting chance with a point separating the top two with four games remaining. Remember that Juve has to go to Inter and Roma as well, two teams involved in a frantic battle for the two remaining Champions League spots. It will be an exciting end to the season.