It’s fair to say, life did not greet Robbie Fowler gleefully in India. The last position in the Indian Super League table and a fair share of controversy was not what Robbie Fowler was hoping for in the first month.

Csaba László started on a brilliant note beating Jamshedpur in the opener, however, Chennaiyin FC seemed to have lost their track. Don’t get me wrong, Chennaiyin FC played brilliantly in all their games recording the highest xG, 2.16 per game this season, however, the Marina Machans have been wasteful in front of the goal.

Both the teams clashed to earn all three points and it was evident throughout the match. Although the game ended in a 2-2 draw, either of the teams could have sealed the win.

In this tactical analysis, we will discuss the tactics and intricacies of both the managers. This analysis will also discuss why East Bengal struggled in the first half massively along with other aspects of the game.

Robbie Fowler started with his newly adopted 4-1-4-1 instead of his preferred 5-3-2. However, he reverted back to his preferred formation in the second half with East Bengal trailing 0-1. The Liverpool legend also started with the same personnel that played against Kerala Blasters in the previous fixture.

In the first phase of build-up, Memo dropped to form a three-man backline. He generally occupied a wider position rather than splitting the centre-backs and Anirudh Thapa acted as the lone pivot. When that happened the Chennaiyin wingers would invert and the full-backs would overlap causing East Bengal problems. 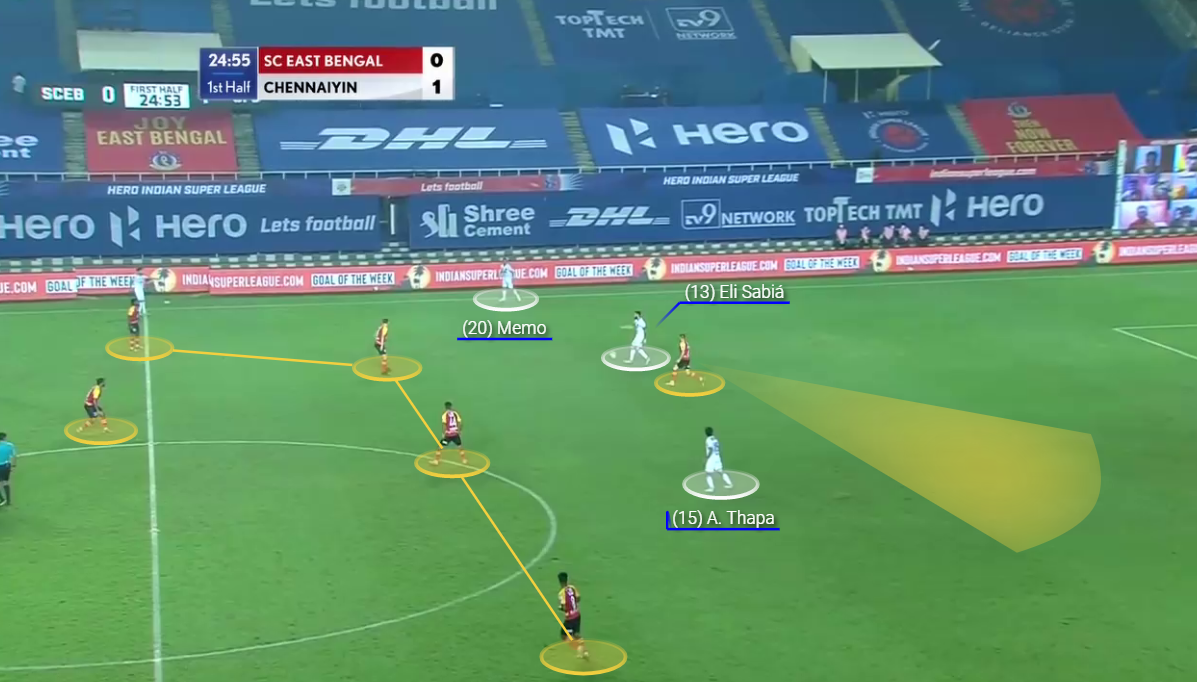 East Bengal generally pressed in a 4-1-4-1 high/midblock (depending upon the dynamics of the game) with the striker Anthony Pilkington pressing the ball-carrier centre-back keeping the other centre-back in his cover shadow, thus forcing the build-up to the flank. One of the midfielders would move higher and press Memo when he received the ball, the other midfielder would keep a track of Thapa, and the wingers would keep track of the Chennaiyin full-backs.

East Bengal did not face problem in their left vertical half but struggled in the right, especially in the first half where Jerry (LB) pushed higher most of the time almost acting as the winger. 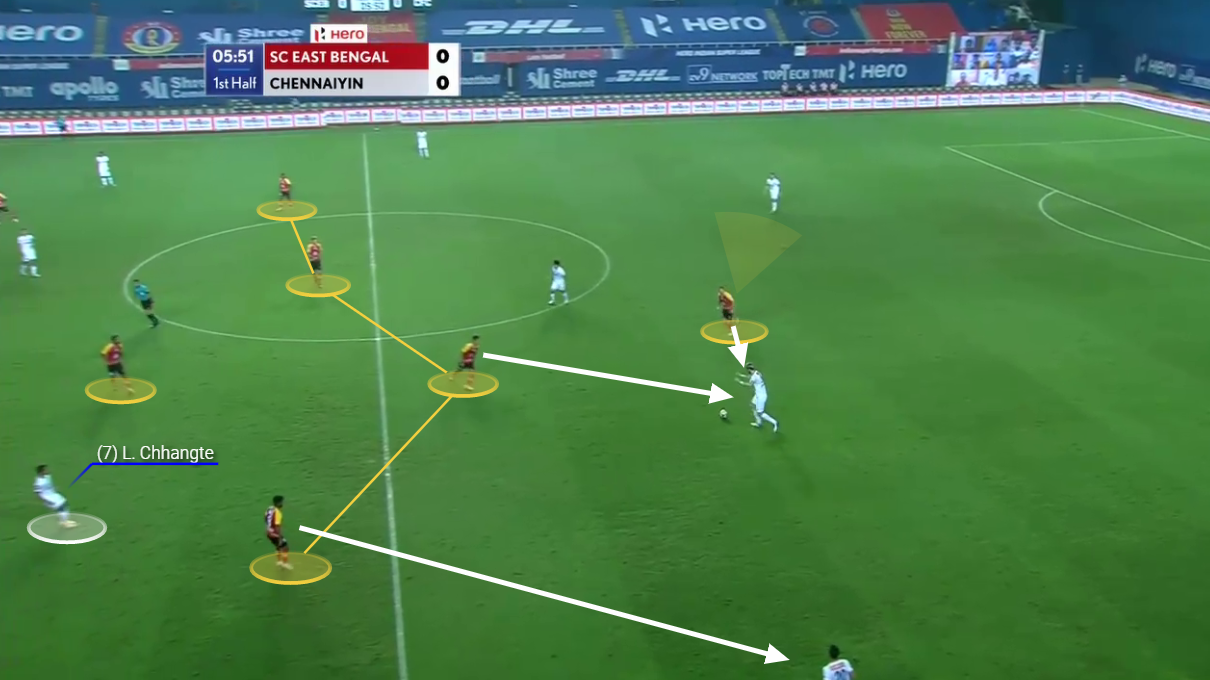 In the above image you can see, Tomba Singh pressing the Bosnian centre-back when he carried the ball to his zone and Mohammed Rafique positioned himself in the half space trying to prevent the passing lane to the inverted Chennaiyin left-winger, Lallianzuala Chhangte, as well as maintaining a distance where he could press Memo if he received the ball.

However, with Chhangte inverting and Jerry overlapping, it created a decisional crisis on the East Bengal right-back, Surchandra Singh… 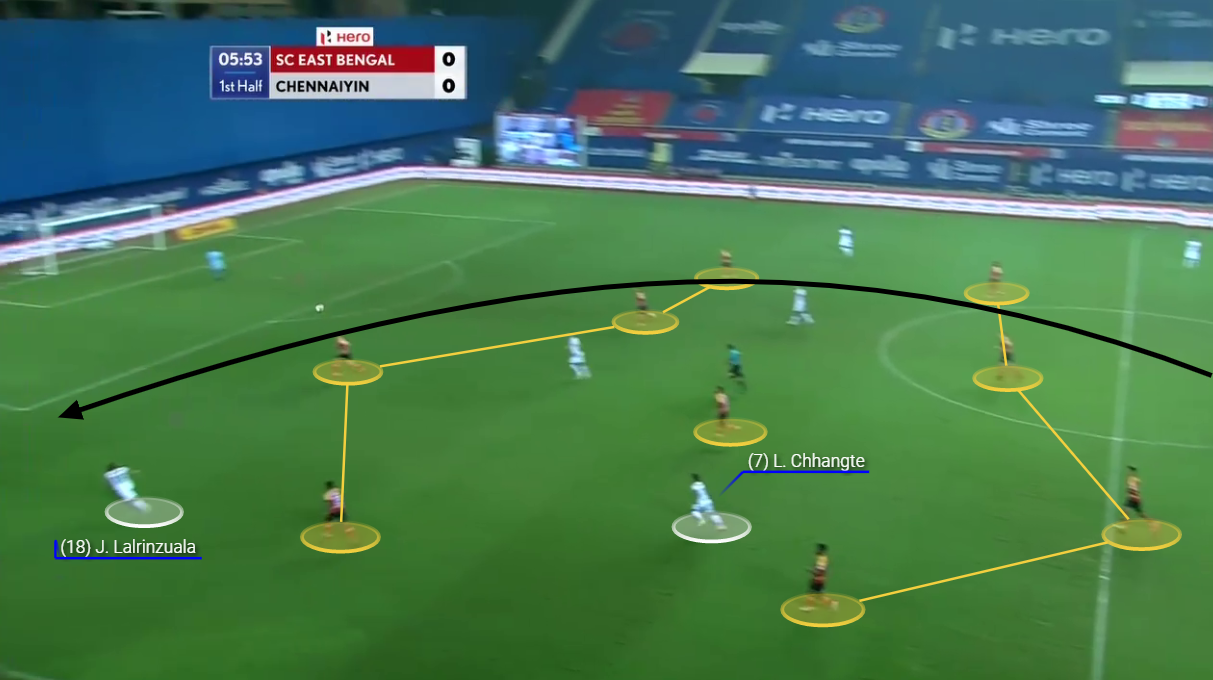 …and a long ball from Sipović could find the overlapping left-back in a lot of space.

Again in the image below you can see, Surchandra is in a dilemma whether to press the inverted winger or mark the overlapping left-back. 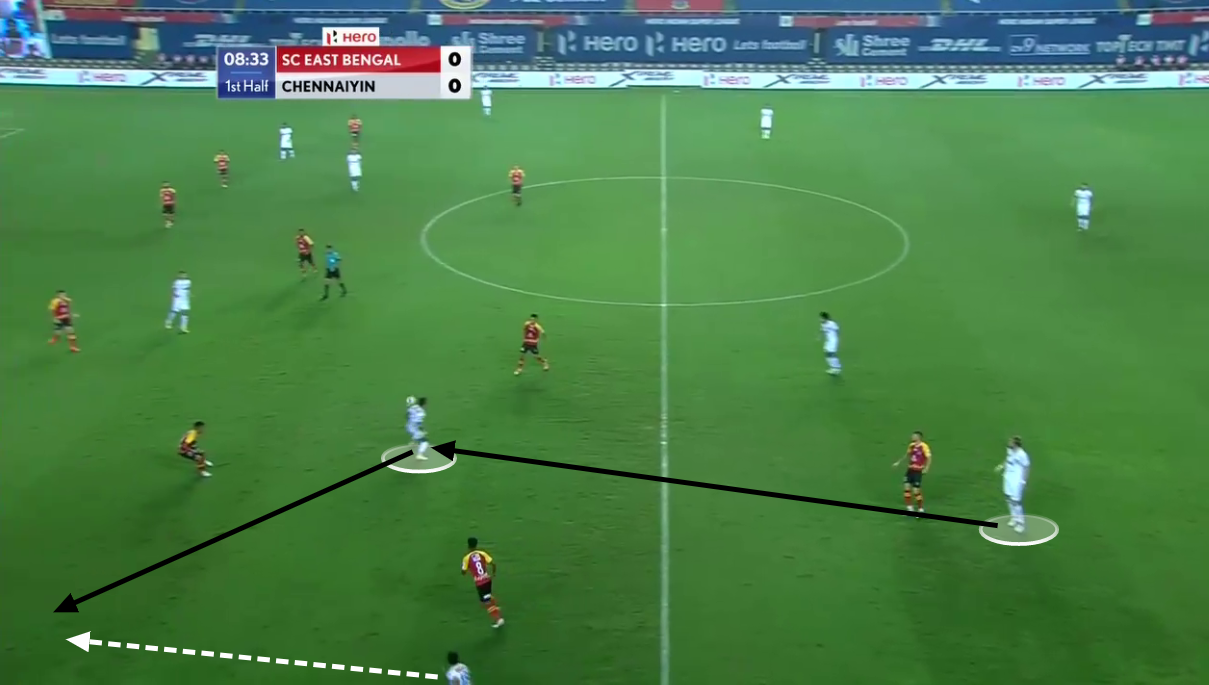 However, in these situations, Chennaiyin were poor in executing their build-up and East Bengal escaped.

East Bengal fails to take advantage of the midfield overload 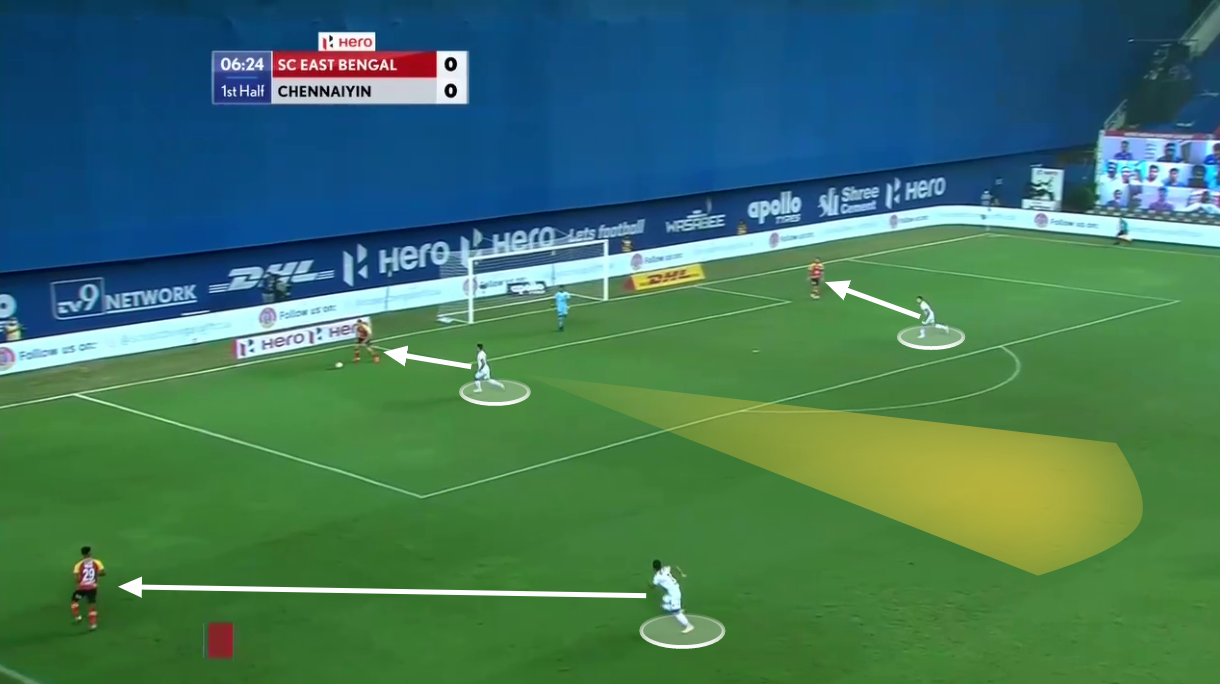 It left Chennaiyin with a lesser man in the midfield. Thapa and Memo had the mammoth task of marking Tomba, Shehnaj Singh, and Matti Steinmann. 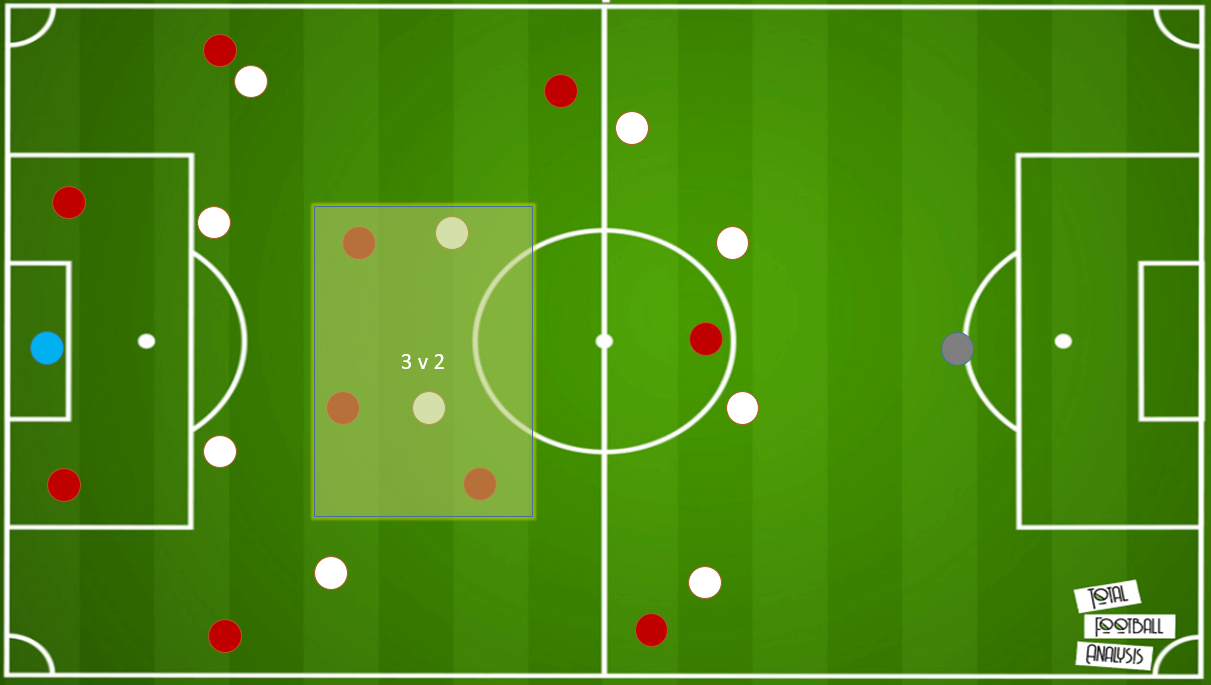 However, most of the time, East Bengal could not find a pattern to exploit the midfield overload. As you can see, Scott Neville opted for a direct route to a midfielder and Thapa intercepted the ball. 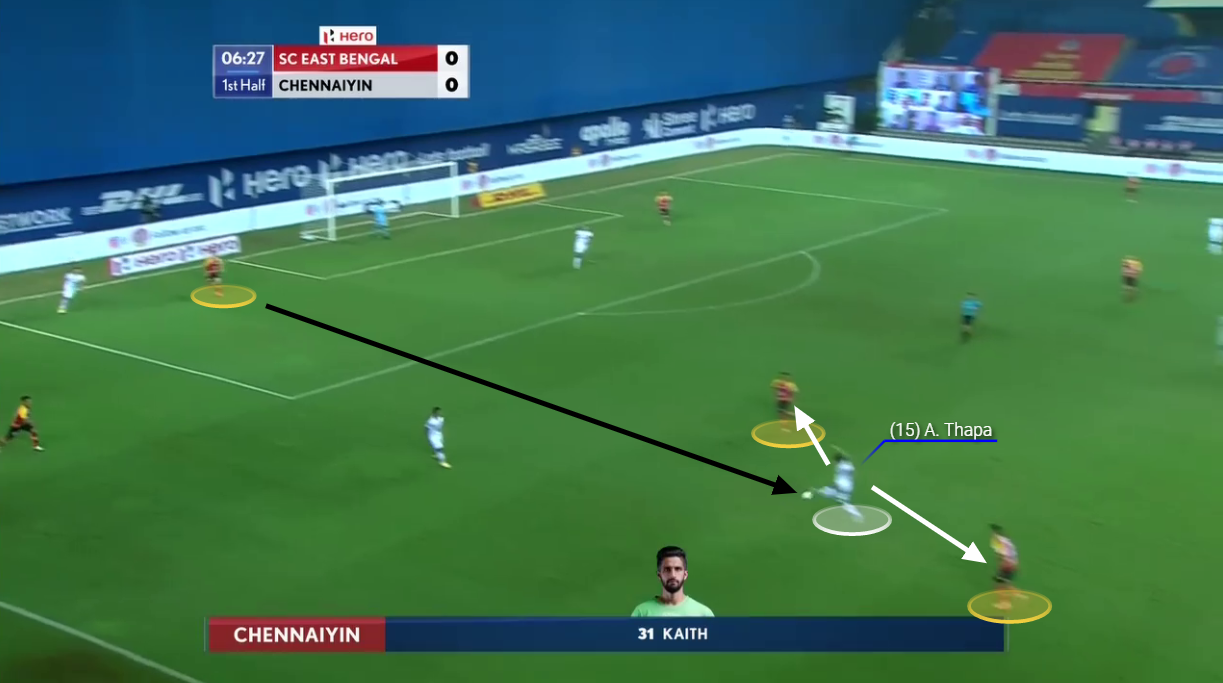 East Bengal opted for the wrong option most of the time in their build-up. 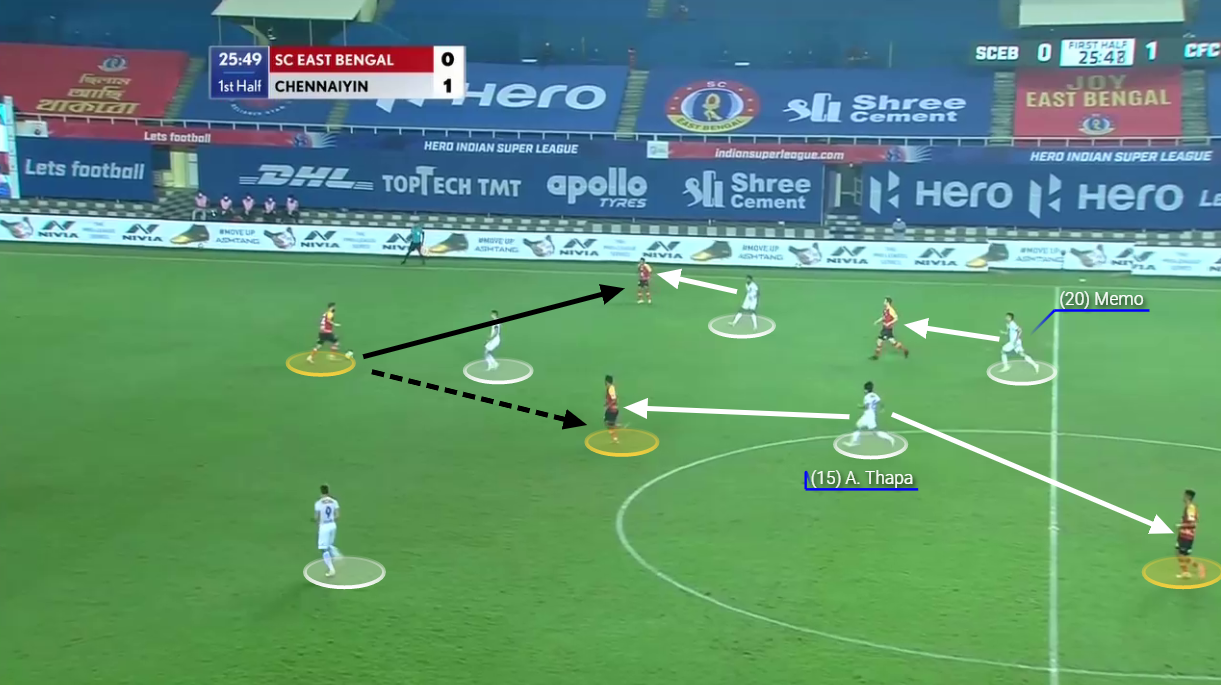 Here, Crivellaro’s body orientation was poor and Shehnaj moved out of his cover shadow. Danny Fox could have passed the ball to the midfielder where he and Tomba created a numerical overload on Thapa, however, Fox passed the ball to Bikash Jairu and led him to a Chennaiyin pressing trap.

East Bengal did not always find the wrong options, a couple of times they did exploit the overload. 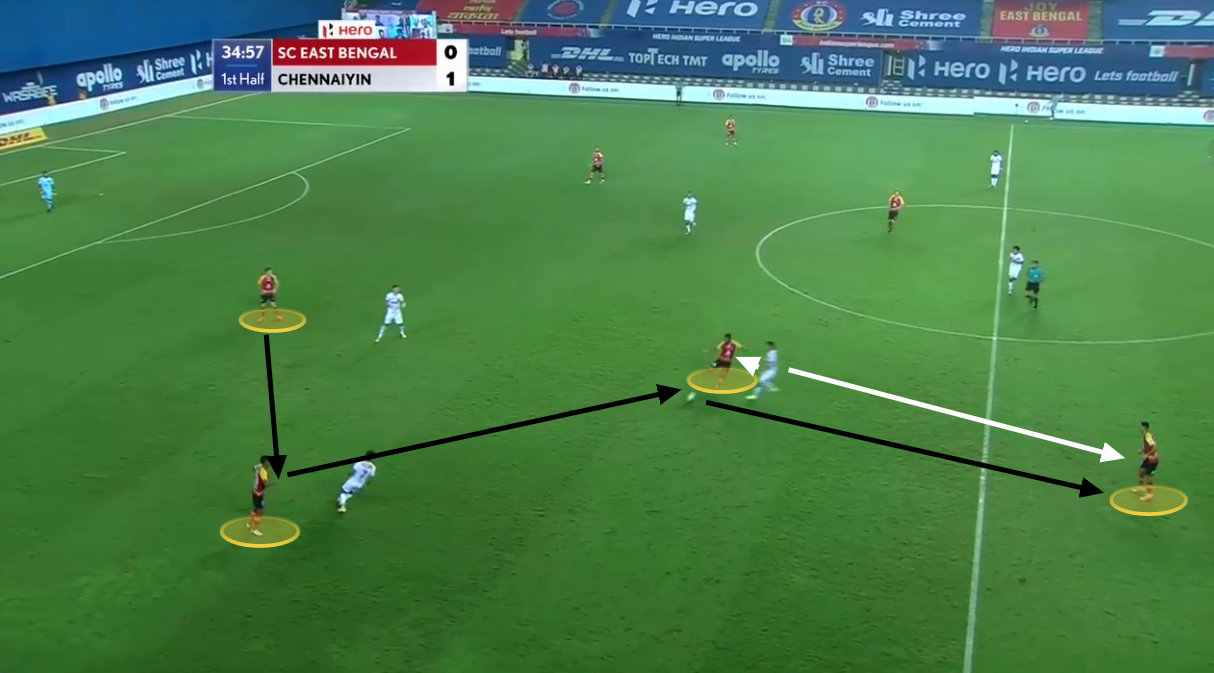 Here, Scott Neville took the help of Surchandra (2nd man) to progress the ball to Shehnaj (3rd man) who created a 2 v 1 situation with Tomba on Memo. 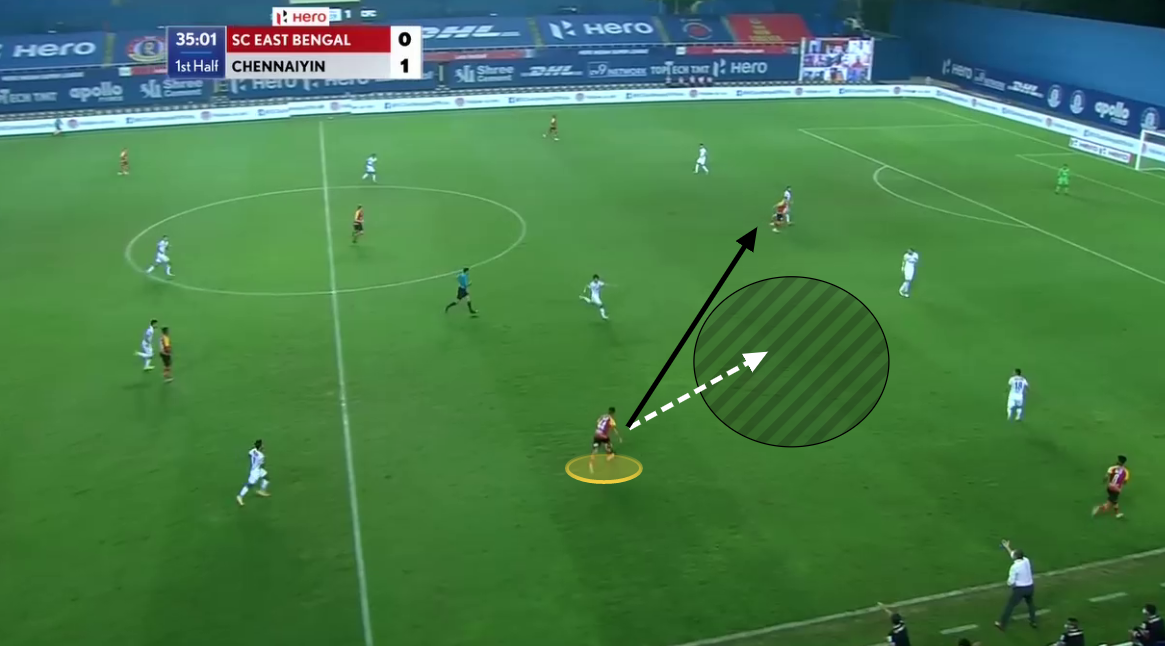 Shehnaj played a first time ball to Tomba who had a lot of space and time to exploit Chennaiyin’s defence but instead opted to play the ball to Pilkington who had Eli Sabiá lurking on his shoulders. Tomba could have easily carried the ball to the final third and then look for a passing option. These sort of poor decision making by East Bengal players led to 55 ball losses in the first half compared to Chennaiyin’s 49 even when the Marina Machans had the majority share of the ball.

In man-oriented zonal marking, each player has a zone/space to cover as well as has the responsibility to mark the opposition who tries to enter his zone. 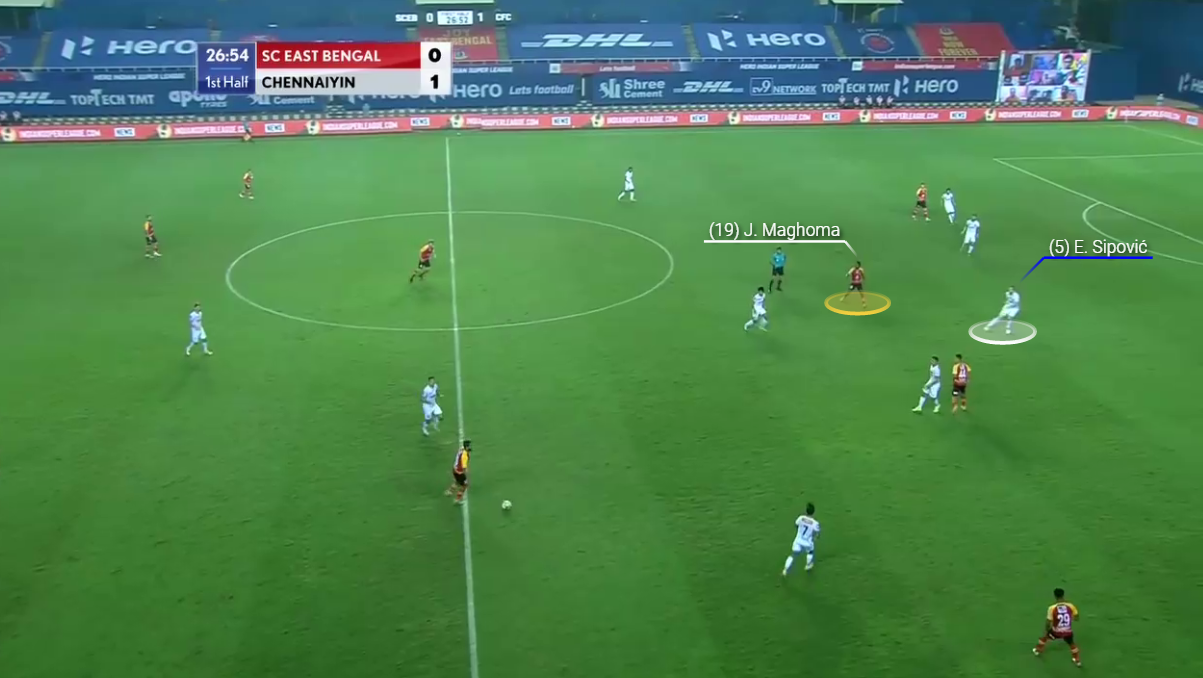 In the above image, you can see, the Bosnian centre-back moving up from his line when Jacques Maghoma tried to enter his zone.

Occasionally, it would either create a space behind or a separation (more distance) between the full-back and the centre-back. 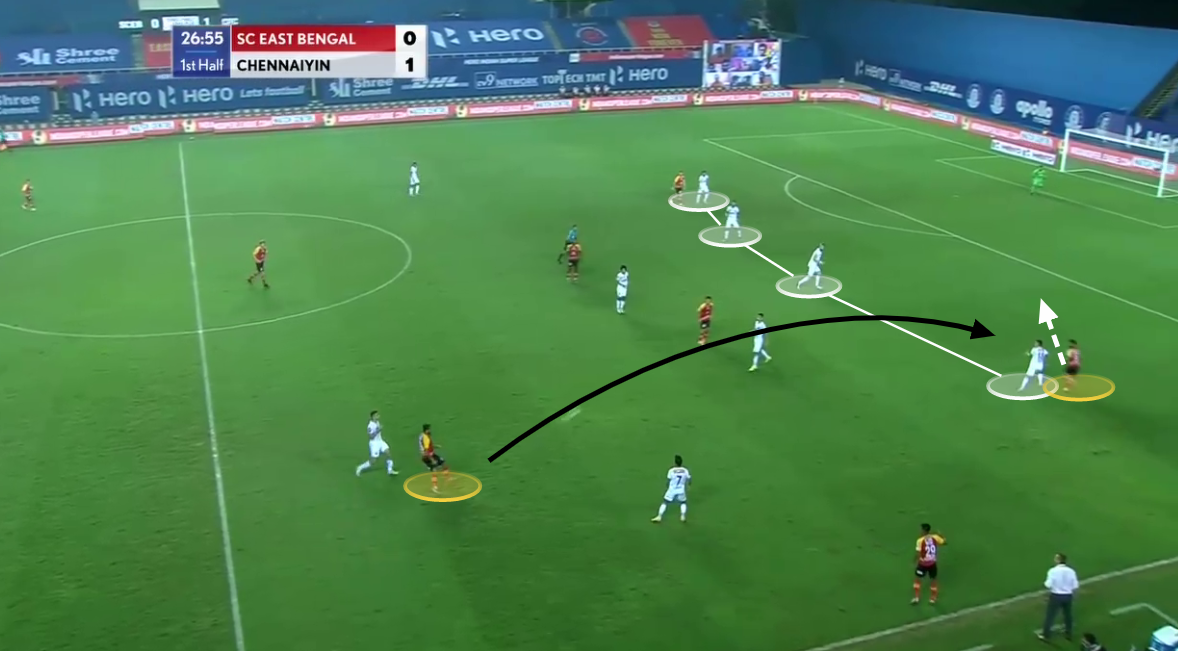 Here, you can see, Rafique making a run behind the left-back, Jerry, however, a poor pass by Shehnaj did not trouble Chennaiyin’s defence.

Ten minutes later, Rafique could have easily levelled the score from a similar kind of move. 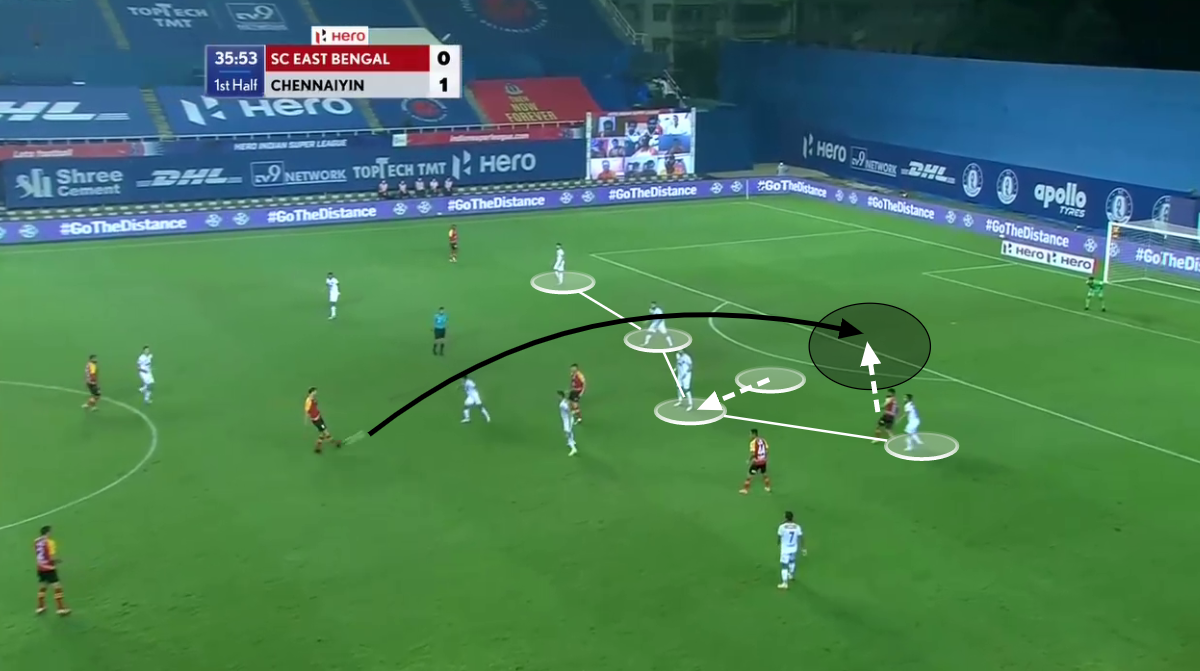 Pilkington occupied the space in between the lines which again pulled out Sipović from his position. Rafique made a similar kind of run in the space behind the Bosnian centre-back. Steinmann provided a delightful lofted ball only for Rafique to miss a golden chance. 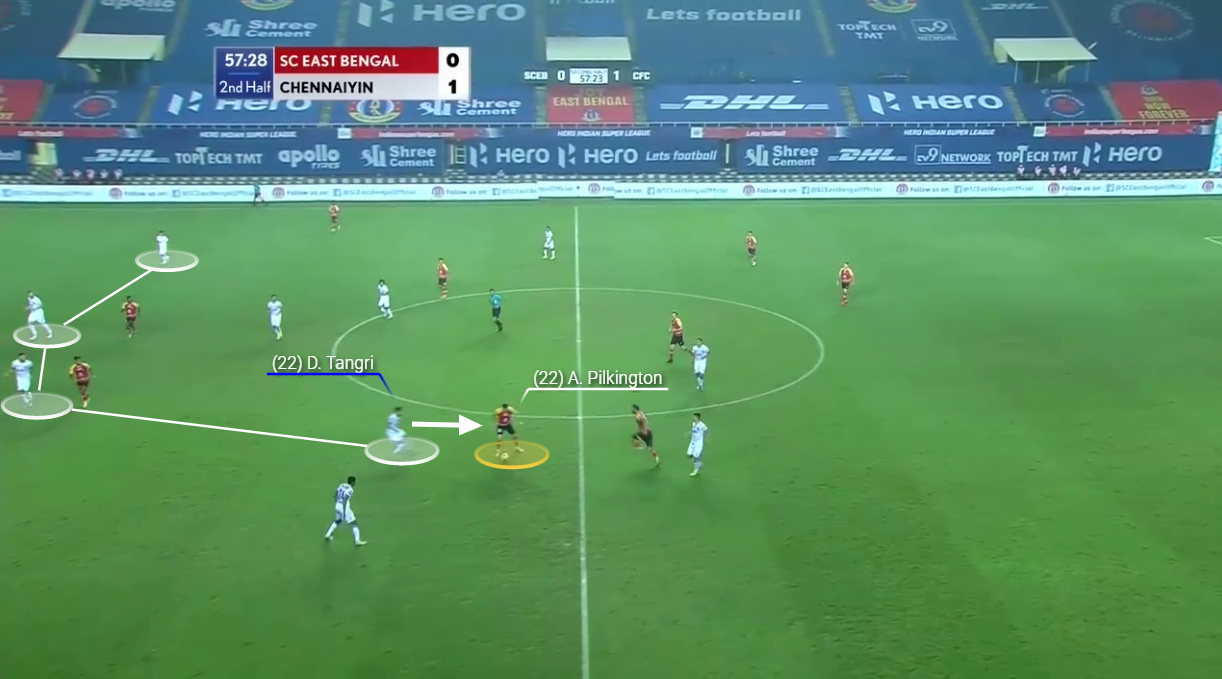 Here, you can see Tangri moving up to press Pilkington in the midfield… 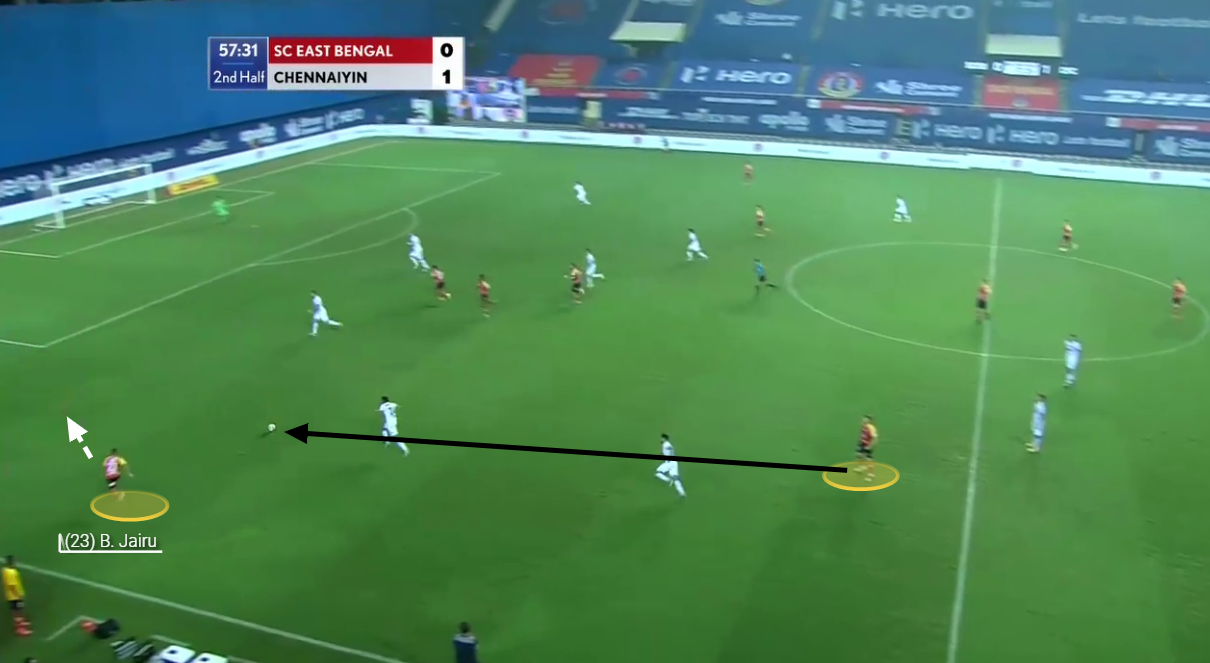 … and with Jairu making an overlapping run, it troubled Chennaiyin.

In the first half, when East Bengal played with a four-man backline with Jairu as the full-back, he was always in a conundrum whether to push higher or stay back. 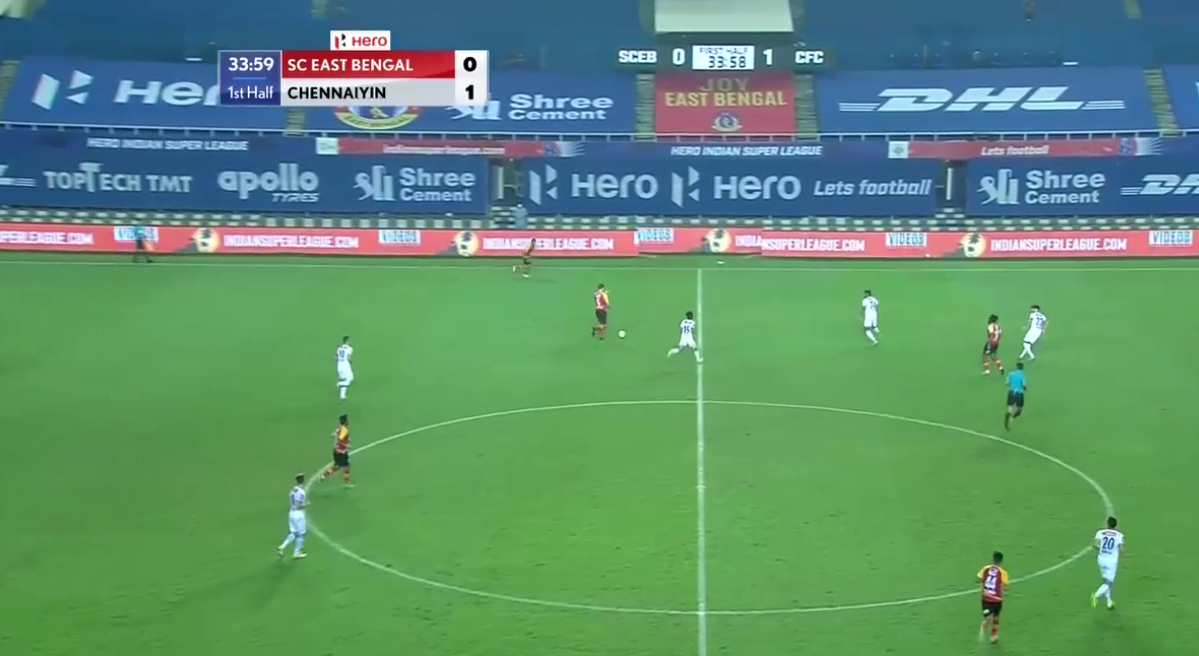 As you can see, Maghoma inverts to the half space trying to create a decisional crisis on the Chennaiyin right-winger and right full-back along with Jairu. However, Jairu stays back as a passive left-back and East Bengal’s attack lost all venom. Even you could see Steinmann asking Jairu to move up, in this instance.

The switch by Fowler definitely helped East Bengal in their build-up.

The red zone is the space in between the midfield and last line of defence. With 4-1-4-1, Fowler had an idea that the pivot (Shehnaj) or the defensive shield in front of the last line of defence would protect the space in between the lines. However, Chennaiyin players were intelligent and would position themselves in a lot of space. With the respective defenders in their vicinity not moving up to reduce the space and Shehnaj not potent enough on the night to cover the space, Chennaiyin were in for a treat. 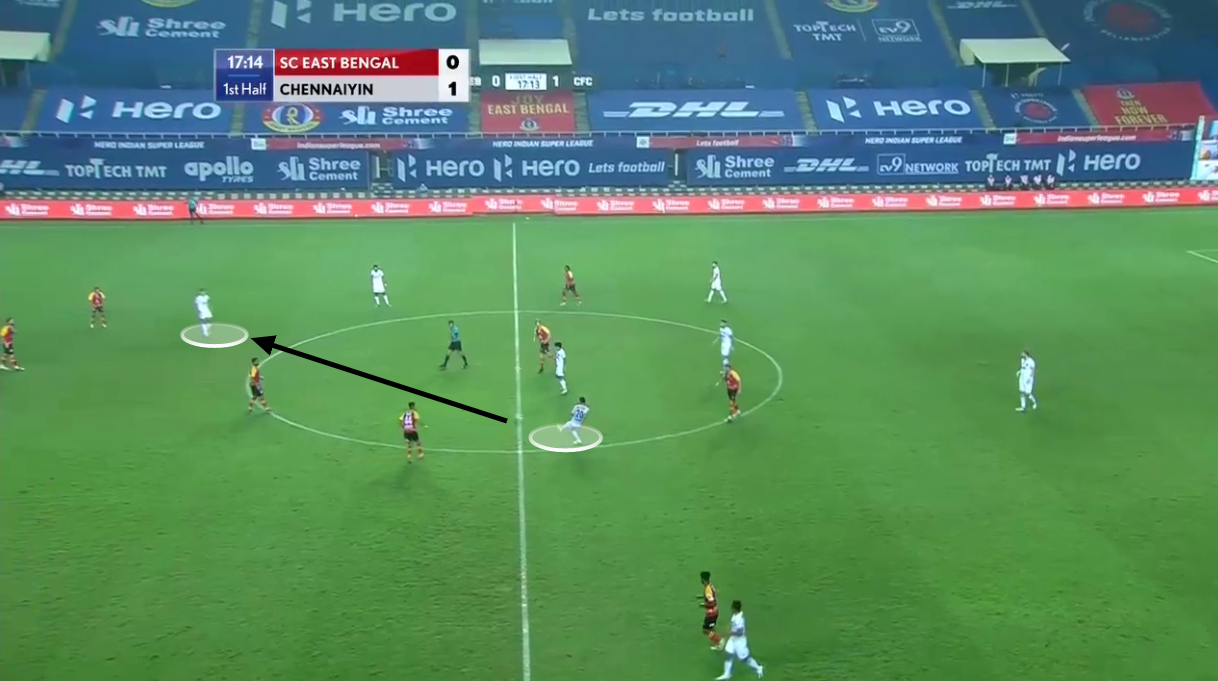 In the image below, Jakub Sylvestr dropped in between the lines and Neville did not close him down which could have resulted in a lot of space for Sylvestr. However, poor control by the striker saved East Bengal’s blushes. 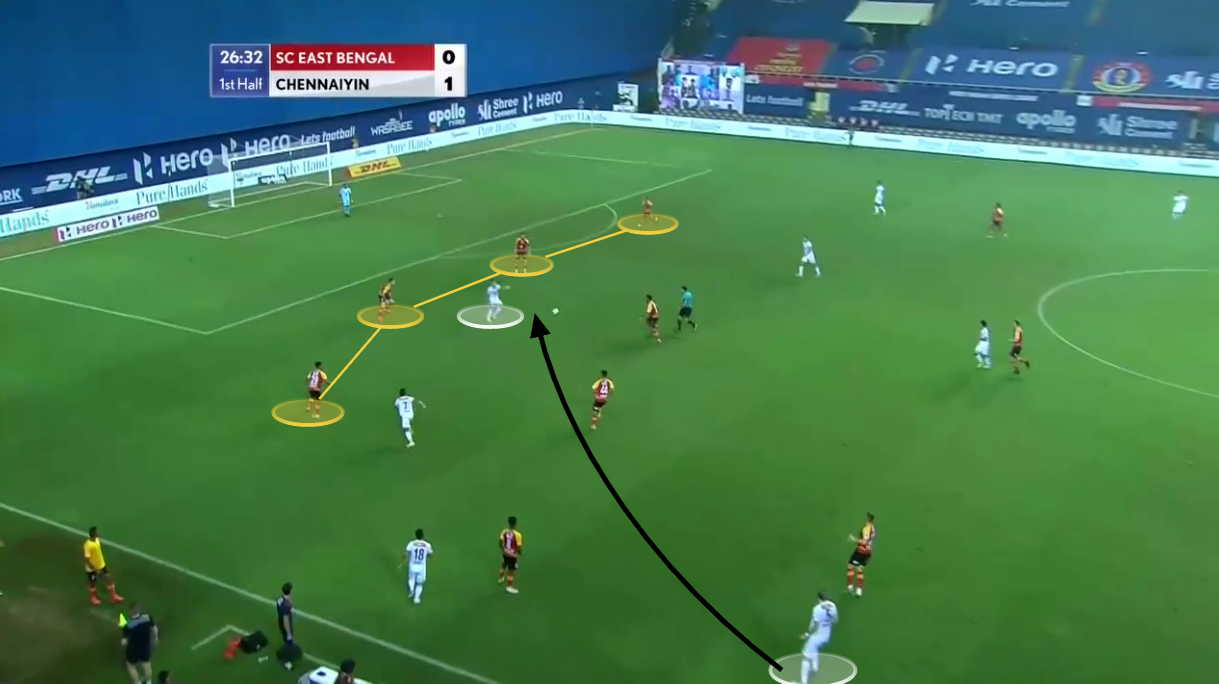 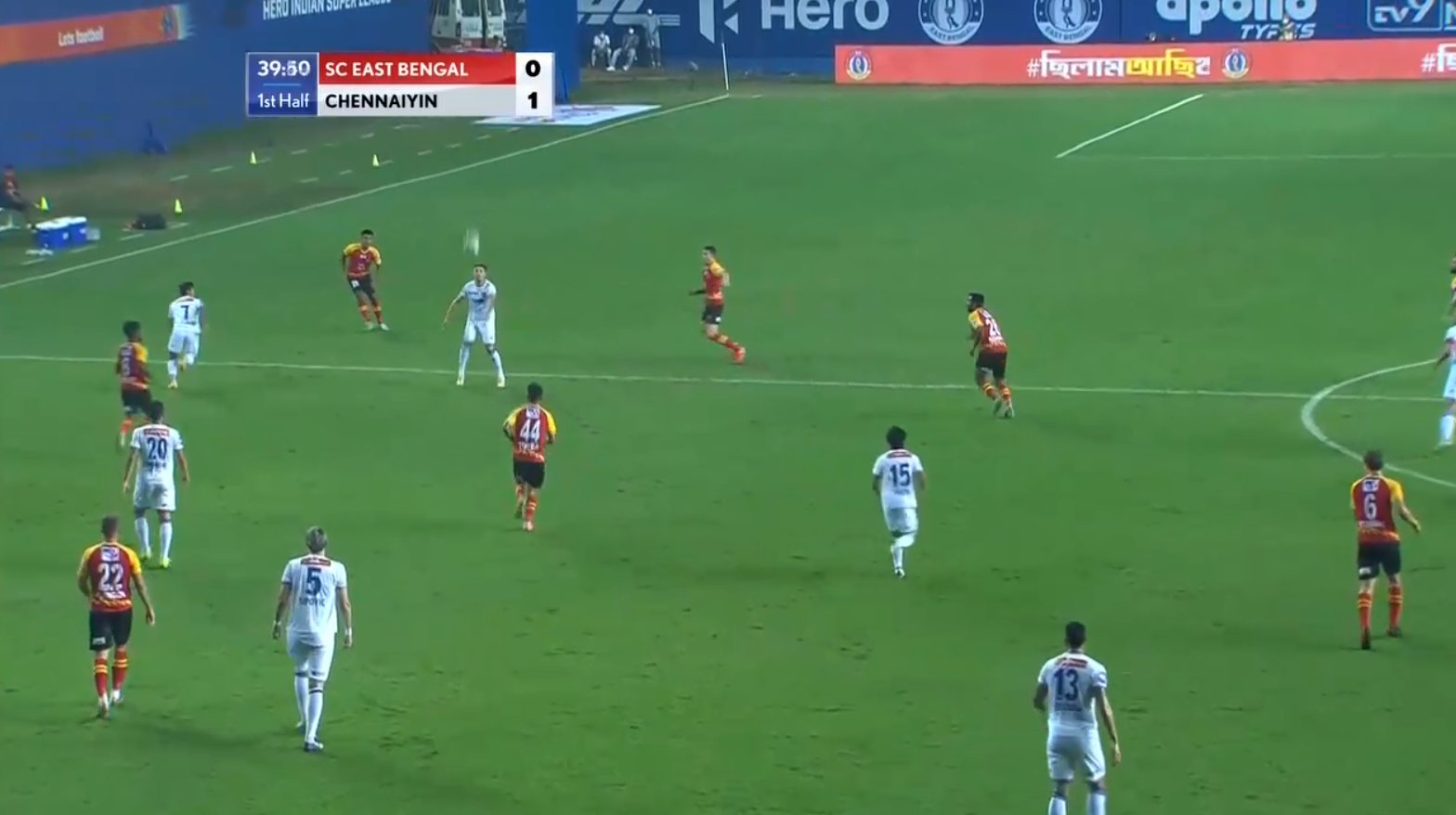 It’s difficult to explain through an image but if you notice carefully, you can see Neville is in a conundrum whether to move up and closely mark the opposition striker or to maintain his line. He makes his first mistake by deciding to maintain his line which helps Sylvestr to control the difficult ball and then the second mistake was his slow reaction in closing the striker down eventually. Surchandra also had his part in conceding the goal but Neville could have done much better in this situation. 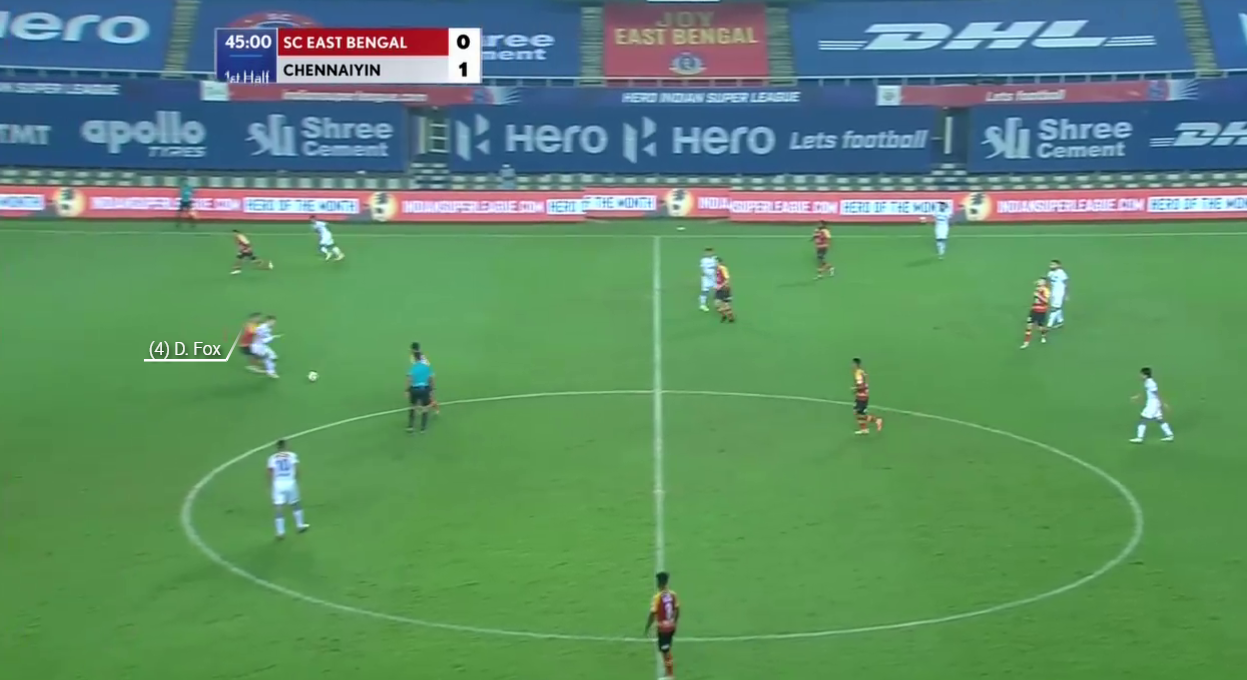 However, Neville would still be in a dilemma whether to close down the opponent or to maintain his line and eventually end up doing neither. 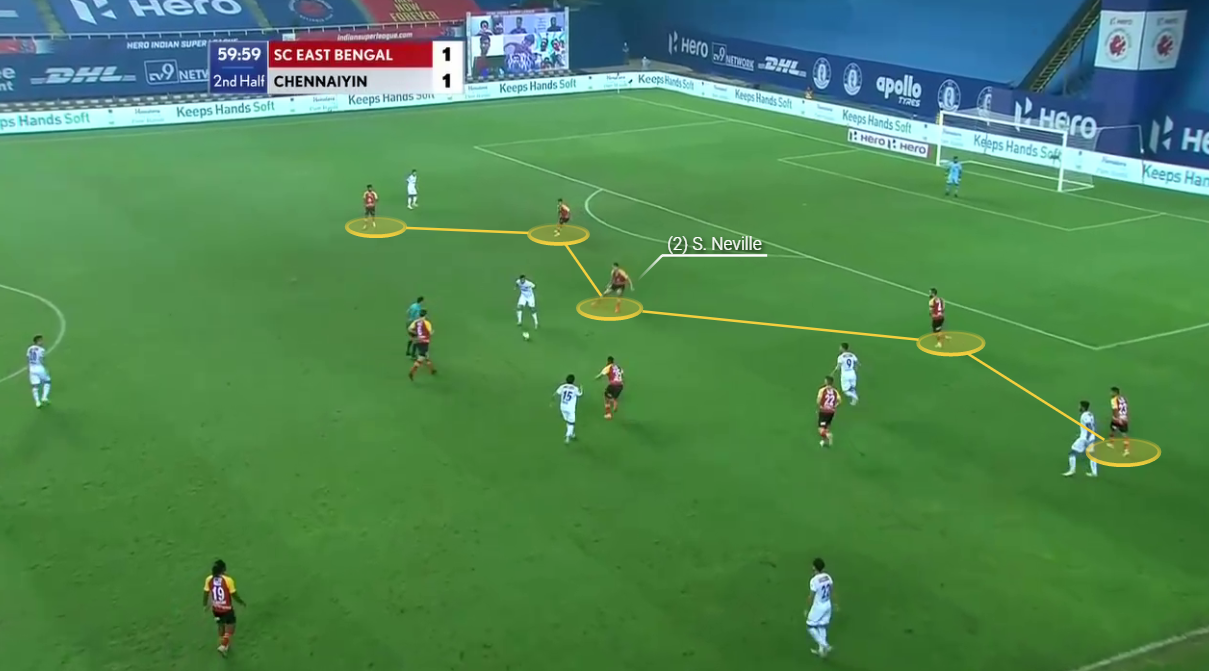 Even the second goal conceded was due to his poor decision making and slow reaction along with Jairu’s failure of cutting down the lane. 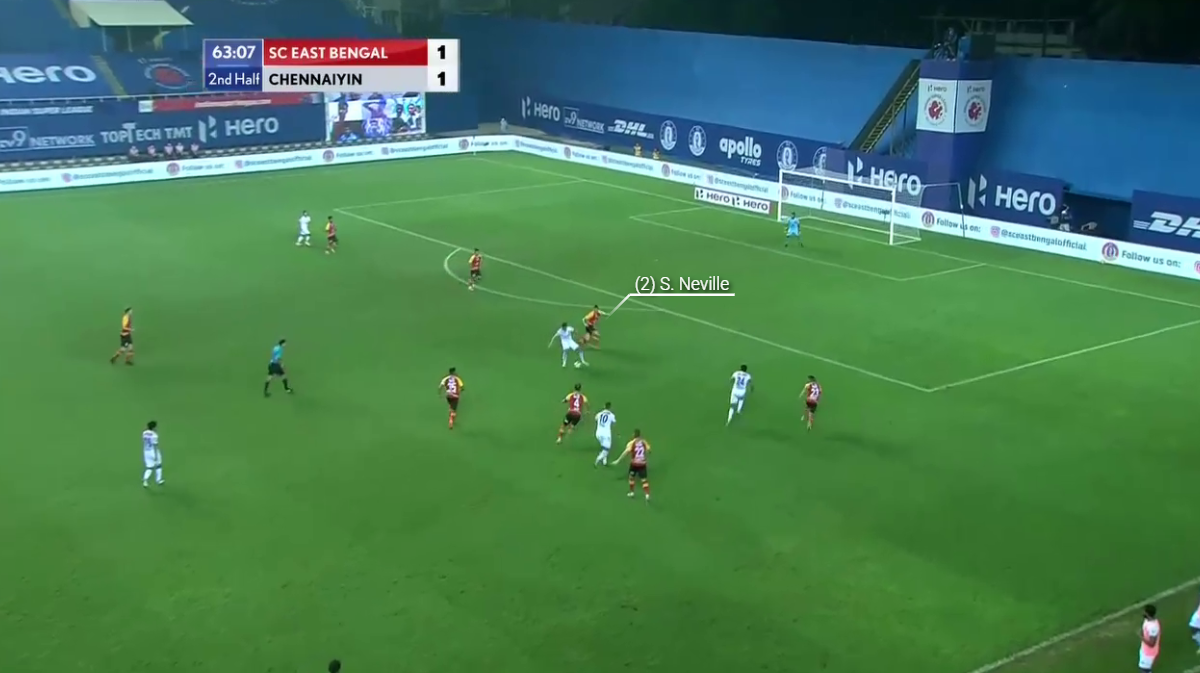 Here, you can see, he moves up to close the opposition and then decides to hold his line, again giving Sylvestr time and space to play the ball to Rahim Ali’s path. This situation was a bit tougher for him as Fox too moved up to press an opposition. However, the dilemma of Neville in whether to go for the ball or maintain his line proved costly for Lal Holud.

I won’t dive deep into it, however, would explain why Chennaiyin conceded the goals and why the Marina Machans would continue conceding goals from corners if László doesn’t tweak his setup. 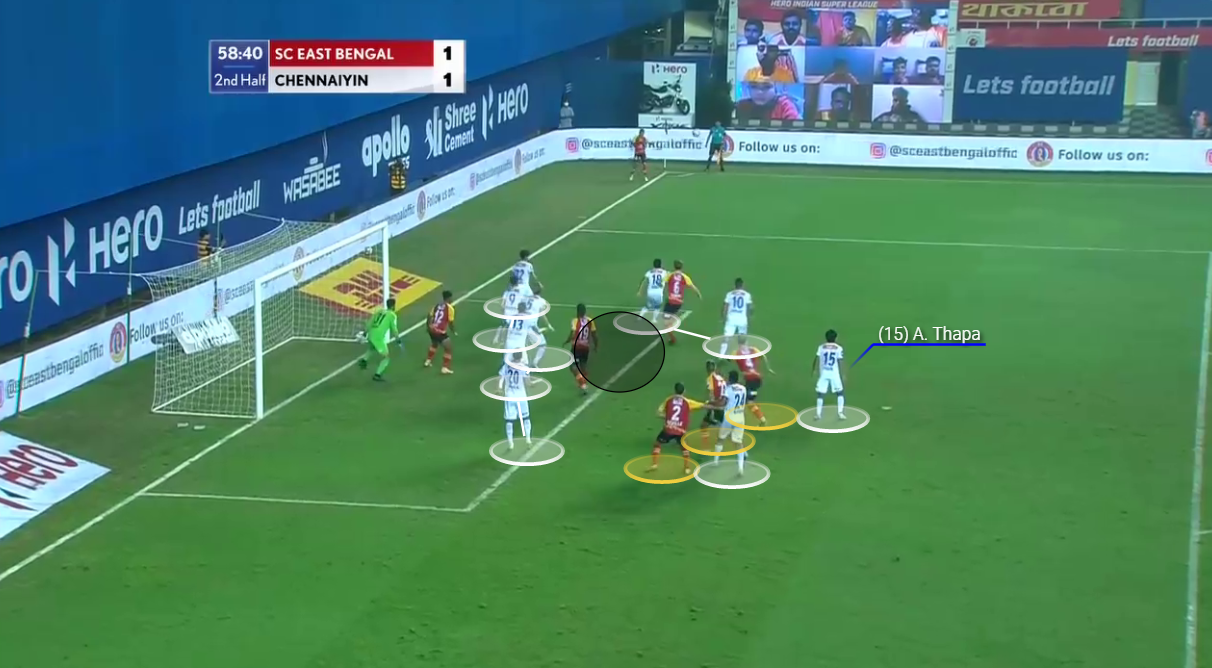 The last line inside the six-yard box was too poorly staggered almost looking like a straight line. And the space between the last line and the second line is huge in the near post area and that’s the region East Bengal targeted and scored their first goal from. When the crosses were outswingers, the defensive lines were higher and East Bengal couldn’t find the space but inswingers caused Chennaiyin’s lines to drop deeper and the space emerged. If you also notice, the far post region outside of the six-yard box was too underloaded with three East Bengal players covered by Rahim Ali. 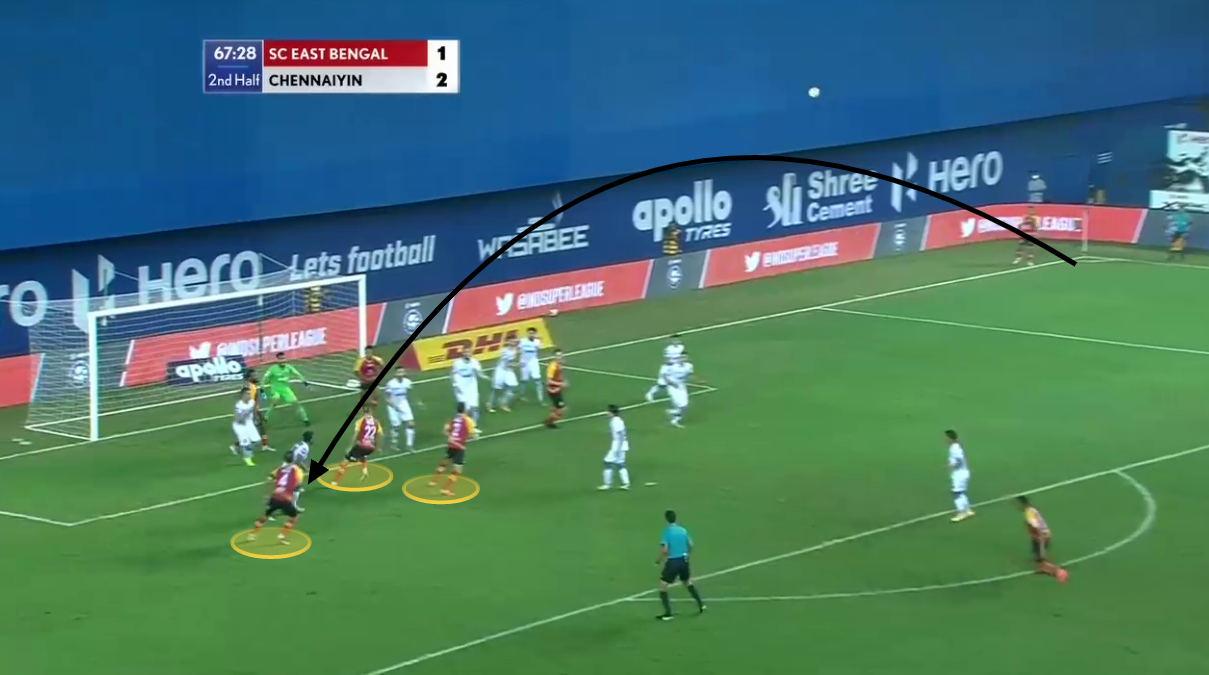 That’s how East Bengal scored their second goal with Danny Fox forcing a save from Vishal Kaith only to be rebounded to Steinmann’s path.

It was an exhilarating affair between the Lal Holud brigade and the Marina Machans, both the teams fighting to earn all three points. Chennaiyin dominated the first half, however, with the tweak in formation, East Bengal got back into the game.

Robbie Fowler did not get his first win but should be proud of the way East Bengal played in the second half. However, the former Liverpool and Manchester City player should definitely look to shuffle his backline with Neville, Jairu, and Surchandra all struggling.

Chennaiyin and their poor performance in front of the goal continued. Chennaiyin took 18 shots and only four were on target. Going by the xG, Chennaiyin generated 2.06 compared to East Bengal’s 1.11. Sylvetsr and Chhangte should have definitely done better. Although Chhangte scored a goal, he could have scored two more if not for his poor first touch and Sylvestr’s horrendous performance in front of the goal continued. The Slovakian striker has generated 6.31 xG playing only 631 minutes but scored only one goal.