How did Fabinho conduct Liverpool’s exploitation of Fulham’s compact shape?

After a fantastic week in Munich, qualifying for the quarter-final of the Champions League, Liverpool returned to league action with a chance of taking top spot ahead of the March international break. With Manchester City in FA Cup action, a win would have put the Reds two points clear of their title rivals.

Standing in the way were 19th-placed Fulham who have been in poor form and have recently swapped former manager Claudio Ranieri for Scott Parker. In this tactical analysis, we will look at how Liverpool returned to the top of the Premier League. 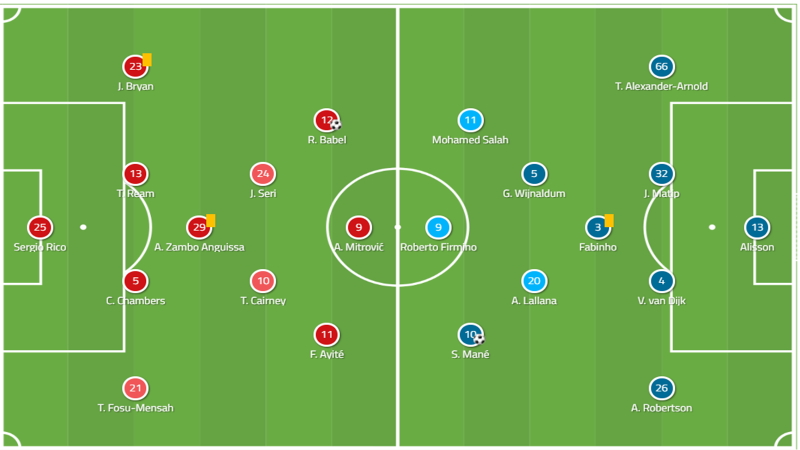 Liverpool made two changes from the team who was triumphant in Munich. Fabinho entered the scene at the Allianz Arena in the first 10 minutes due to an injury to captain Jordan Henderson. The other change saw Adam Lallana, who was impressive against Burnley last week, come in for James Milner.

For Fulham, Scott Parker opted for a 4-3-3 with former Liverpool winger Ryan Babel playing on the left and Alexander Mitrovic starting up top for the London side.

Fulham compactness in the first half

Scott Parker would have gone into this game trying to stop one thing as a priority: the Liverpool attacking three. With the Liverpool wingers playing as inside forwards, Fulham played with a structure which was very compact. Below in Fulham’s pass network, you can see that the average positions of the Fulham full-backs are deep and quite narrow, except Cyrus Christie who came on in the 73rd minute.

This prevented Liverpool from playing centrally through Fulham, therefore neutralising the threat of Liverpool’s narrow front three. The problem with this was it allowed space on either flank for Liverpool to attack.

Against most other teams, this would not be a problem as it is harder to score from wide positions than central positions. However, with Liverpool’s attacking full-backs in Andy Robertson and Trent Alexander-Arnold, it was an area that they exploited well in the first half.

In the above image, we can see how compact the Fulham defence is with the front line screening off any passes which can go through the middle of them. But what you can also notice is the space either side for both Alexander-Arnold and Robertson. What was key to exploiting this space was the passing by Fabinho, who has been a revelation since cementing his place in the Liverpool midfield.

Playing between the full-backs, the Brazilian was fantastic at switching the ball from side to side in order to get the ball to these wide spaces as quickly as possible. In the match, Fabinho completed 64 out of his 68 passes, of which 12 went to Alexander-Arnold and 11 to Robertson.

You can see below the range of passing Fabinho had in the match, but his key passes from the game are the diagonal passes into both the Liverpool wing-backs who were in space due to Fulham’s compactness.

These passes helped in playing in the Liverpool full-backs into situations like below. From these areas they could cut the ball back towards the penalty spot for a tap in for a Liverpool attacker. This was partly why Liverpool had a total of 2.95 expected goals, as a few chances they had were efforts with a high xG.

This pattern of play was used for Liverpool’s opener, but this time it was a combination between Sadio Mane and Roberto Firmino. To begin with, Mane starts from a wide position, so due to Fulham’s shape he is left in space. As he runs more centrally he plays the ball towards the byline for Firmino to run onto.

Mane superbly carried his run on towards the penalty spot. This then creates an overload in this area, so no one can mark him when Firmino plays the ball back, leaving him free to tap the ball past goalkeeper Sergio Rico. This effort was rated as 0.48xG, and a chance like that for a player in such form as Mane was always going to be a goal.

If you look below at Alexander-Arnold’s pass map you can see the majority of his crosses did not work out. After scoring two headers out in Munich in the week, Liverpool did not show the same aerial threat against Fulham. Instead, they were better sliding the ball along the floor from the byline.

Liverpool let Fulham change the rhythm of the game

In the second half, Fulham had a few chances on goal, and this led them to have an xG of 0.99. But you must bear in mind 0.82 of this was from Ryan Babel’s open goal. Nevertheless, Liverpool did give them chances, and this was down to poor shape in the transition.

In the below scenario, we can see the space for Jean Michael Seri to pick the ball up in central midfield. This is due to the gap between midfield and defence.

This example was in the lead up to Fulham’s offside goal. When Seri gets the ball, Joel Matip has to close him down to reduce this space. The problem with this is Matip gets caught out and dives in, making it easy for Seri to get past him. It could be easy to say this is poor defending from Matip, but it’s the Liverpool shape in the transition which has made this really challenging for the Cameroonian defender.

Problems like this also happened when Liverpool were attacking as they failed to shut the back door. In the below example Liverpool have a corner and commit players forward but the deepest player back is Robertson who is not even central, leaving plenty of space for Ryan Babel to start a counter-attack.

This was a surprise to see as Liverpool’s defensive shape has been brilliant all season. It has led them to lead the way defensively in the league and only concede 18 goals in 31 games.

“The gaffer said calm it down, first thing I did was slice it over the top and put Virgil under pressure.” – James Milner

In the first half, Liverpool looked in control of the match. However, the gaps which let Fulham create these counter-attacks completely changed the rhythm of the match and brought anxiety into the Liverpool side. And this is what exactly what happened for Fulham’s equaliser.

When Mitrovic wins the header, James Milner has time to readjust or communicate with Virgil van Dijk to win the ball back. However, Milner hits the ball over Van Dijk’s head which led to yet another breakdown in communication between Van Dijk and Alisson, giving Ryan Babel an open goal to equalise.

However, there was yet another goalkeeping mistake at the other end with Sergio Rico parrying the ball into the path of Mane. Rico then took out Mane before he could slot the ball in the net, resulting in a penalty which Milner scored to give Liverpool the lead and the three points.

Liverpool took home all three points and returned to the top of the league, just 10 points behind their highest tally in the Premier League area of 86 in 2008/09 season under Rafa Benitez. Meanwhile, Fulham have only 17 points this season and are 13 behind safety.

Each team will have a week off due to the international break. When Liverpool return they have a massive game against Spurs in the title race and a Champions League quarter-final against Porto, whereas Fulham face Liverpool’s title rivals Manchester City.