Both Flamengo and Liverpool travelled to Qatar in dominant league positions, Flamengo had already wrapped up their league campaign, winning the Brasiliero Serie A by a 16 point margin, while Liverpool held a 10 point lead over second-placed Leicester City with a game in hand as their Premier League fixture against West Ham United was postponed due to Liverpool’s participation ion this tournament.

Flamengo booked their place in the FIFA Club World Cup final after coming from behind against Al Hilal to win 3-1, while Liverpool beat eventual 3rd placed Monterrey 2-1 in their respective semi-final.

Both sides had won their respective major continental competitions, with Liverpool beating Tottenham Hotspur 2-0 in the UEFA Champions League and Flamengo victorious over River Plate 2-1 in the COMNEBOL Libertadores.

Liverpool have been unbeaten in the Premier League for just under a year, with their last loss coming at the hands of Manchester City, who beat the Reds 2-1 in January. Flamengo went unbeaten for 24 games in the Brasiliero Serie A before losing 4-0 on the final day, after already clinching the title.

In this tactical analysis, I’ll take a look at the tactics Jürgen Klopp used to crown Liverpool as Club World Cup champions, and, using analysis, see what went wrong for Flamengo that made them miss out on winning the FIFA Club World Cup for the first time, with Liverpool lifting the trophy for the first time in their history, with a defeat to Brazilian side São Paulo in 2005.

Liverpool lined up in their standard 4-3-3 formation. Alisson started in goal. Joël Matip and Dejan Lovren were out through injury so Joe Gomez played alongside Virgil van Dijk, with Andrew Robertson and Trent Alexander-Arnold at left back and right back respectively. Naby Keïta, Jordan Henderson and Alex Oxlade-Chamberlain started in midfield behind Liverpool’s famous front three of Mohamed Salah, Roberto Firmino, and Sadio Mané. Both

Flamengo lined up in a 4-4-2 hybrid shape, with heavy positional interchange. Diego Alves started in goal, protected by a back four of Filipe Luís, Pablo Marí, Rodrigo Caio, and Rafinha. Willian Arão and Gerson started in central midfield. 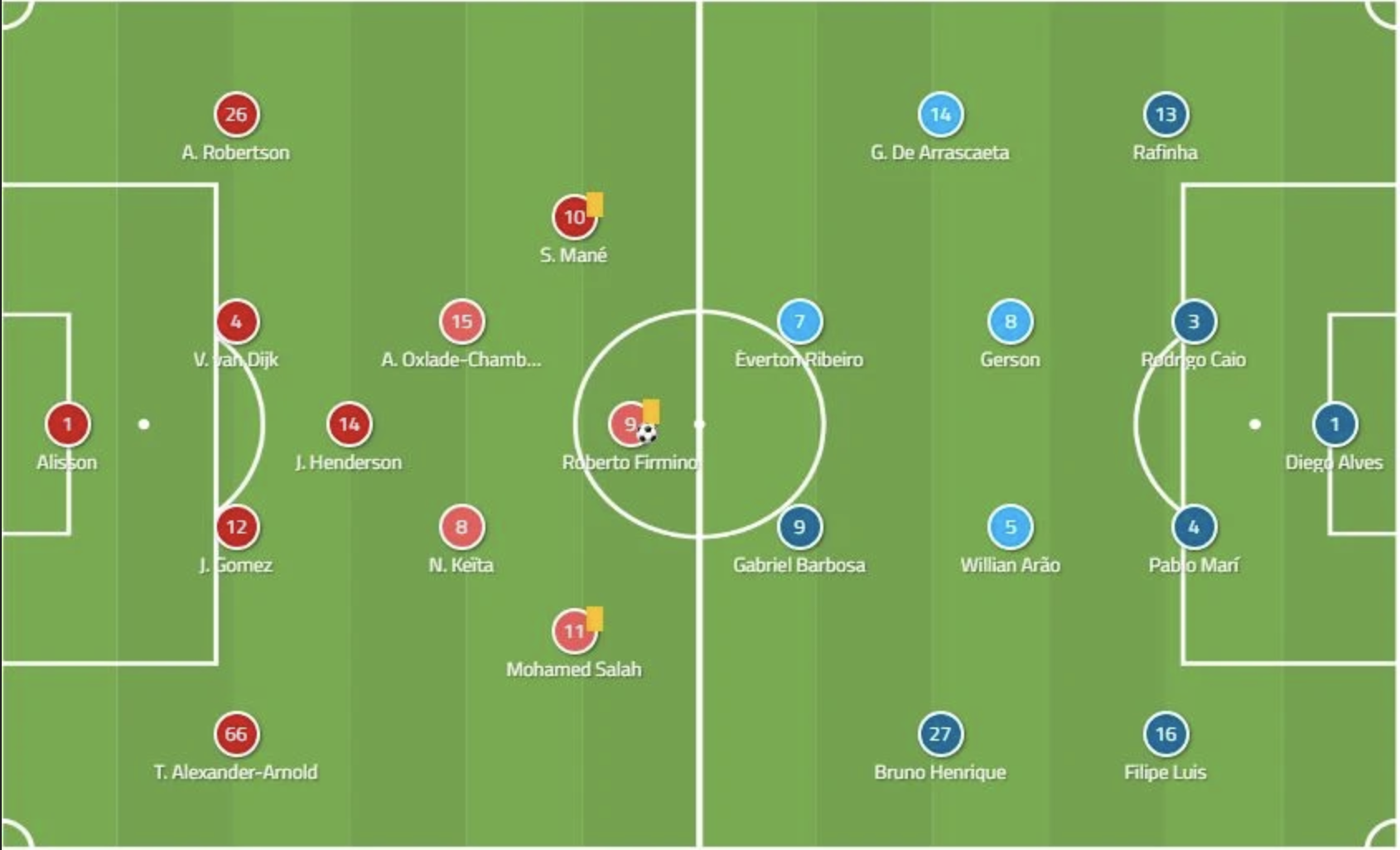 Although they started with a 4-4-2, Flamengo’s players were extremely fluid. When building up, their shape became a 3-5-2, with Arão dropping between the centre backs, and the two fullbacks (Luís and Rafinha) pushing high. The two wingers De Arrascaeta and Henrique would play more central, with Ribeiro and Barbosa as the striking pair. Liverpool kept a high line, allowing space in behind.  Liverpool’s centre backs were isolated in a 2v2 against Flamego’s strikers. On occasion Arão would stay in the midfield and Flamengo would play with a double pivot. 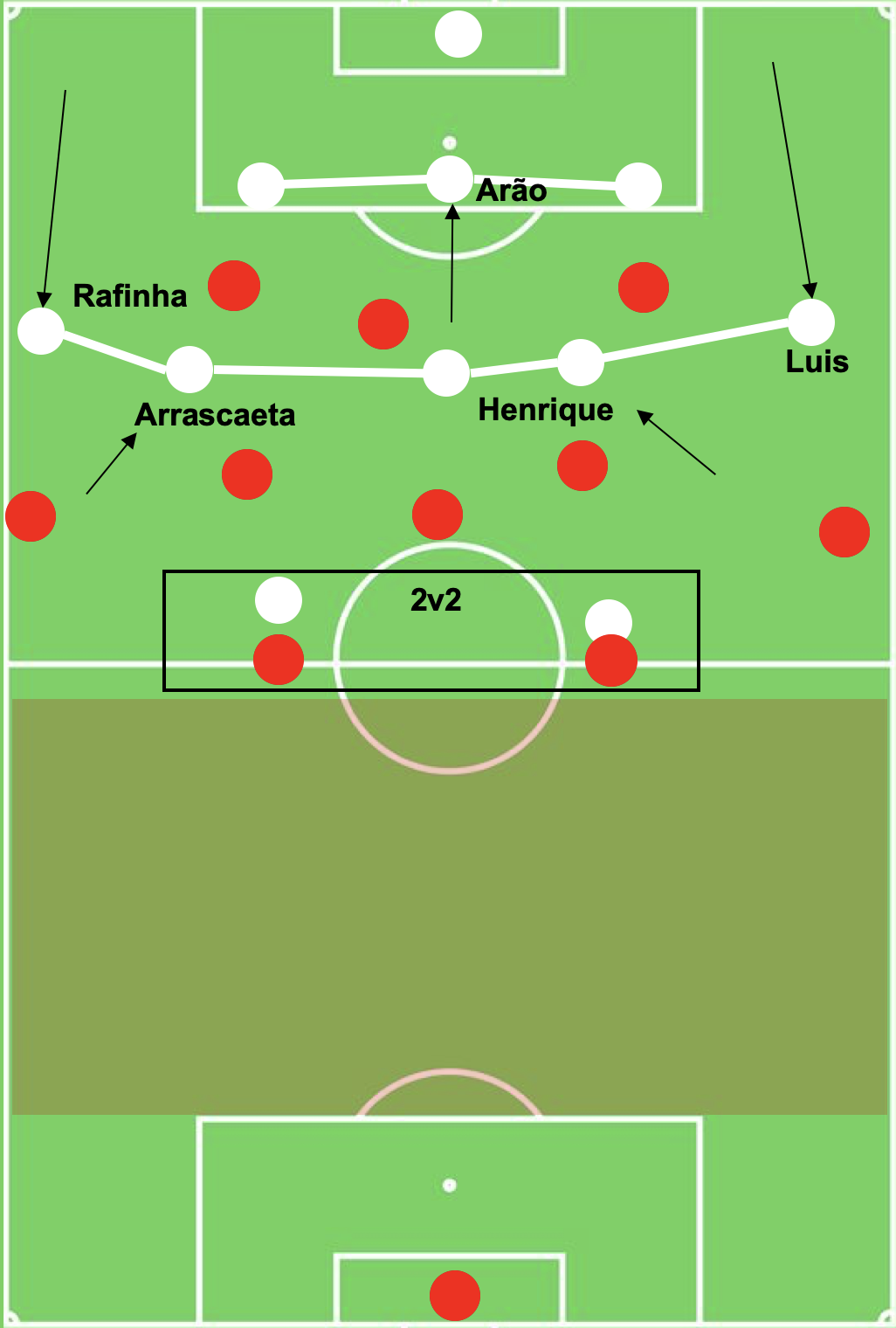 In the below image, we can see how Arão dropped between Flamengo’s centre backs, this helped Flamengo build up as they created a numerical advantage against Liverpool who usually only pressed with one or two players at a time.

One would expect Liverpool to have the numerical advantage in midfield on paper, as Liverpool started with three central midfielders compared to Flamengo’s two, but, as mentioned earlier, the wingers would drop into central midfield as seen in the below image. 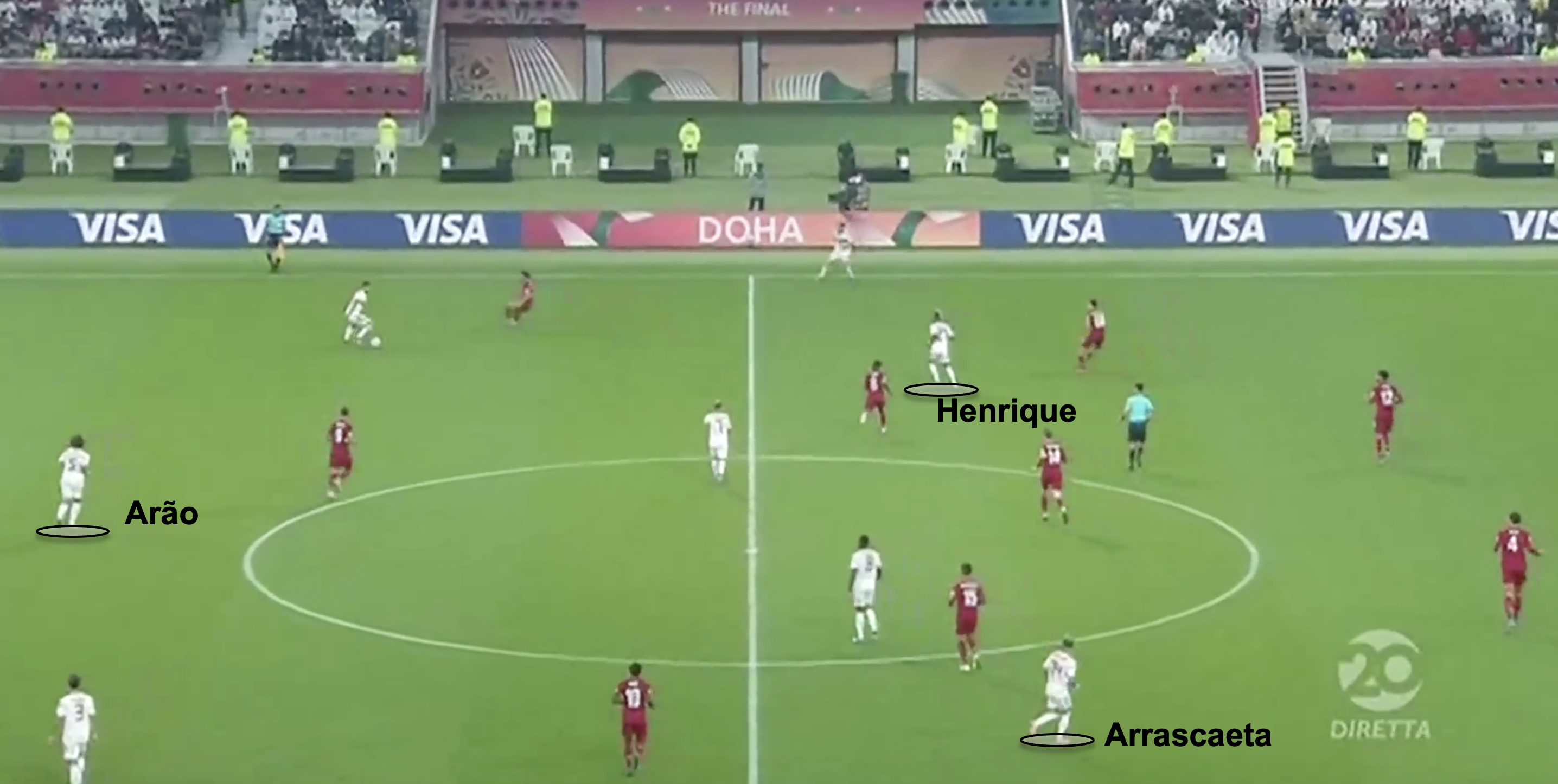 When Flamengo played to their fullbacks, Liverpool’s fullback on that side would step out to press, the inverted winger would then make a run into the space vacated by the pressing fullback as shown in the below images and diagram

Liverpool’s solution to having a numerical disadvantage when pressing was to include Keïta and Oxlade-Chamberlain in the press when the ball was on their side (Oxlade-Chamberlain on the left and Keïta on the right).  The below image shows how Oxlade-Chamberlain stepped out to press, as well as Flamengo’s (occasional) double pivot.

A large portion of Liverpool’s attacking play were long balls to exploit the space behind Flamengo’s defensive line. Often Gomez and Henderson would swap positions, allowing the Liverpool captain space to launch a long pass. The below image shows Gomez in the midfield while Henderson drops into the right centre back position.

Another important facet of Liverpool’s attacking play was the use of Oxlade-Chamberlain’s runs out wide. Robertson would advance with the ball, attracting the attention of De Arrascaeta, who Oxlade-Chamberlain would pin. Then Mane would drop, dragging Rafinha out of position, leaving space on Liverpool’s left wing for Oxlade-Chamberlain to run into. The following image and diagram shows this movement from Liverpool, as well as Flamengo’s defensive shape, which was a flat, space-oriented 4-4-2 which looked to keep space minimal between their lines. 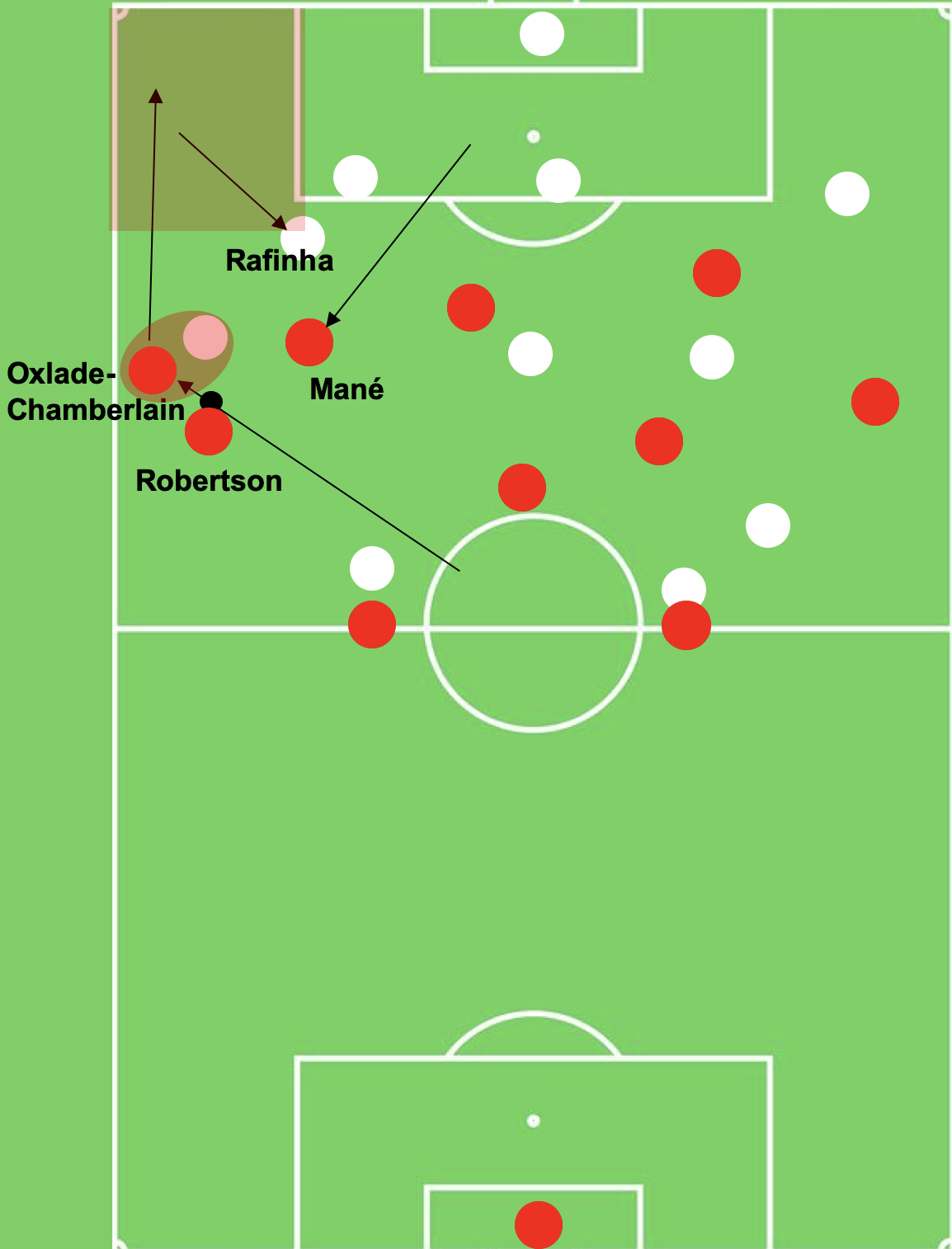 Firmino as a false nine

Firmino was also key in overloading the midfield, the Brazilian played as a false nine, dropping extremely deep to create a rudimentary midfield diamond at times. This helped create a numerical superiority as Henderson and Oxlade-Chamberlain/Keïta were pressed by Flamengo’s midfield duo. 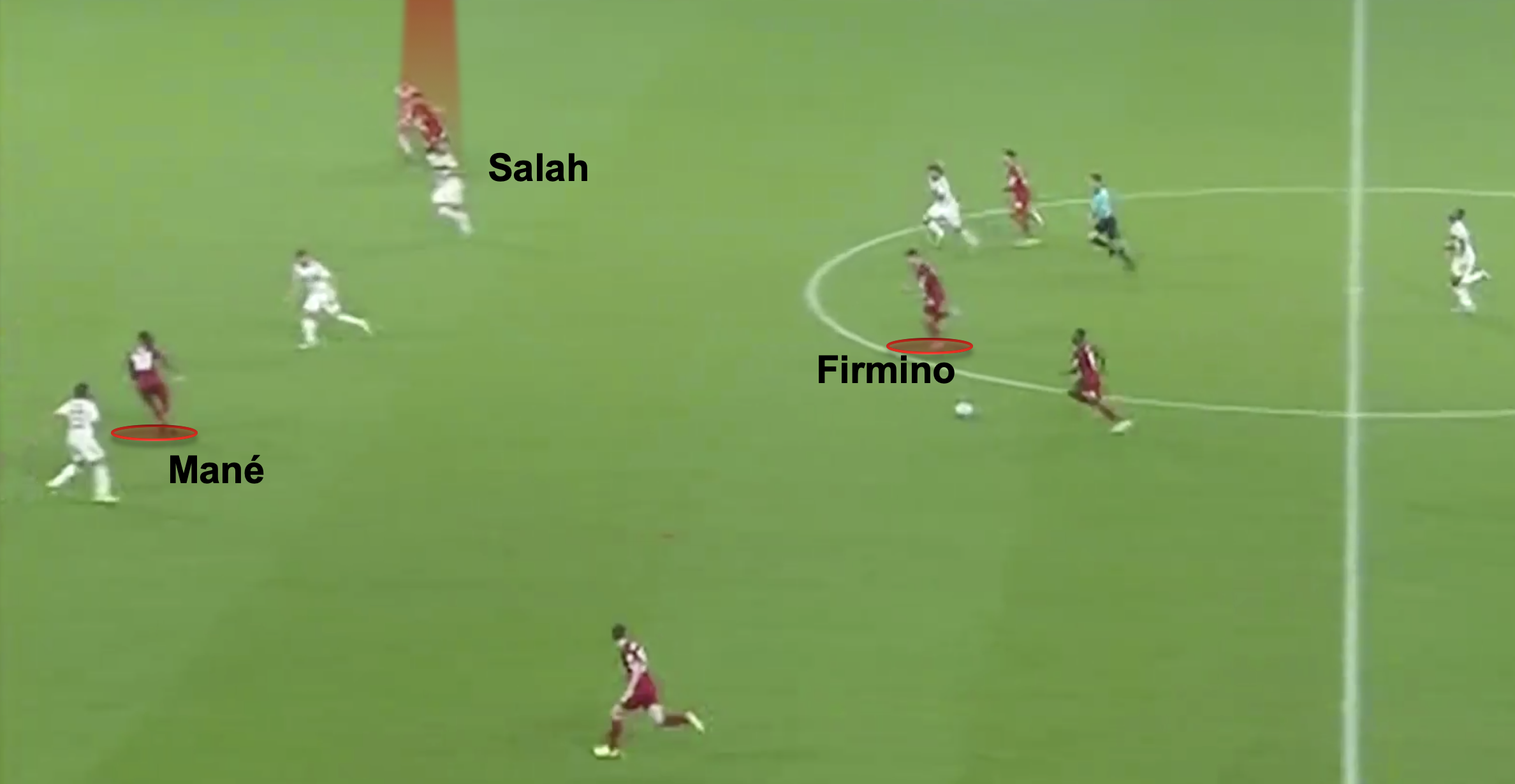 Liverpool will be delighted to bring home their third trophy this calendar year, but will be disappointed that they were unable to score more than one goal, as well as the facty that Jorge Jesus’s men dragged the game to extra time, adding unneeded fatigue as they play against second place Leicester on boxing day. Klopp’s men have already been forced out of the Carabao Cup due to fixture congestion, and will hope that fatigue won’t hinder their performances in their next match.

Flamengo’s season is officially over, with a succesful league campaign and taking the European Champions to extra time as well as leaving it late to win the COMNEBOL Libertadores 2-1 over River Plate, O Mais Querido do Brasil can hold their heads high in defeat.