The Women’s Championship is not a particularly well-known or followed league in the English game, with most of the focus being on the WSL. However, following the relegation of Liverpool Women last season, there is likely to be a little more attention on the Championship this season. In this tactical analysis, we will look at their game against Charlton Athletic Women, and see how both sides’ tactics affected the result. In the analysis, we will look at Liverpool’s defence and attack, as well as both sides’ pressing throughout the game. 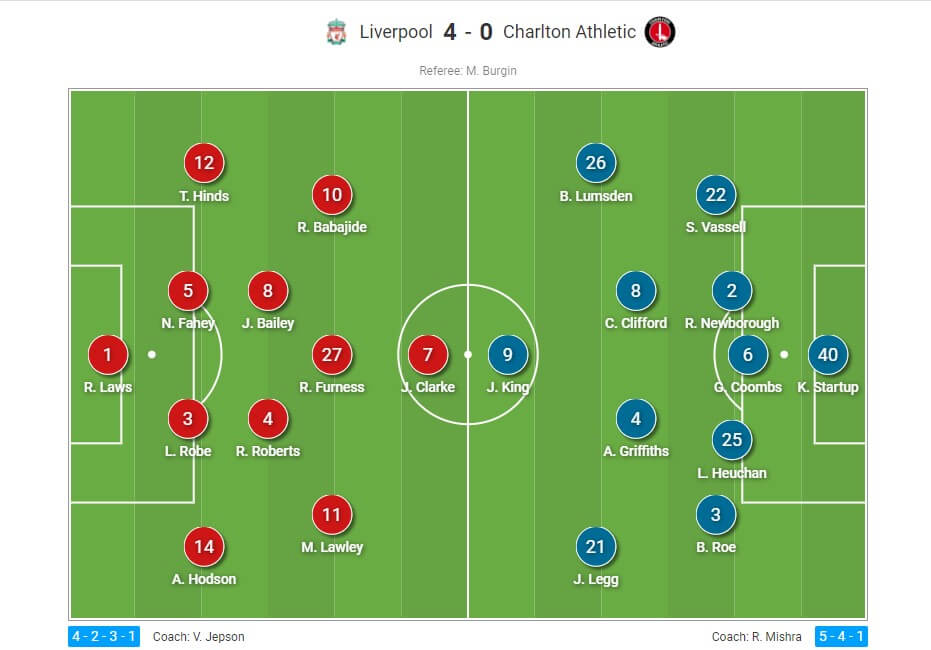 Liverpool Women started the game with a 4-2-3-1 formation, with goalkeeper Rachael Laws and left-back Taylor Hinds both starting, having both joined this summer from Reading Women and Everton Women respectively. With right-back Becky Jane still coming back to full fitness, centre-back Amy Rodgers injured, and captain Sophie Bradley-Auckland on an extended absence, a makeshift defence was put together with left-back Leighanne Robe playing as the right-sided centre-back, and long-serving forward Ashley Hodson filling in at right-back. Jess Clarke started as the lone striker, with Rinsola Babajide, recently in the England training squad, given a role on the left wing.

Charlton Athletic Women went with a 5-4-1 formation for this game, with the clear intention being to sit back and frustrate Liverpool, stopping them scoring. On-loan Brighton and Hove Albion Women defender Beth Roe started at left-back, with another former Brighton player, Jessica Legg, starting on the left wing. Wales international Alice Griffiths partnered Charley Clifford in the central midfield.

Charlton Athletic Women were not looking to get high up the pitch too often, as their 5-4-1 formation showed, but when they did, they never managed to get too far up the pitch. This was because of the way that Liverpool Women pushed their defence high up the pitch, almost ensuring that they had 10 players in Charlton’s half at times. If we look at the image below, we can see how they did this.

Liverpool captain Niamh Fahey has moved to close down the ball here, aiming to stop the Charlton attack. What this means is that Charlton were never really able to get any attacks going, although a few did slip through the Liverpool defenders. It looks like a risky move to push so far up the pitch, leaving the space open behind them, but because Charlton were so far back, it became easy to play like this.

The other advantage that Liverpool have in these situations is that, when they win the ball, they don’t have as much ground to cover to move it towards the attacking players, because they are obviously closer to them. Therefore, Charlton’s apparent desire to not get forward played right into Liverpool’s hands, allowing them to create more attacks than they perhaps would have done ordinarily.

The other notable thing about Liverpool’s defensive setup was that they stretched across the pitch when their goalkeeper, Rachael Laws, had the ball. You can see in this image how they created two very clear passing options for Laws to get the ball too. This also meant that the full-backs were able to push higher up the pitch, and you can see how far up left-back Taylor Hinds, in the yellow circle, has got, when, ordinarily, she would be further back, looking to receive a short wide pass from the goalkeeper. By moving their full-backs higher up the pitch in these situations, Liverpool forced Charlton to stay back, because if they didn’t, Liverpool’s full-backs would be able to get behind Charlton and cause them problems.

It also made it very difficult for Charlton to attack the goal kicks and close the goalkeeper down, because, if they closed down the keeper, the two defenders were open. If they closed down either of the defenders, the ball would just go to the other. The images below show this tactical setup in practice.

The common factor in both images is that Charlton only used one player in attack, keeping the other further back. This meant that Liverpool didn’t need to work too hard to create the options, and simply needed to split apart, as they have done in both instances, to offer two good passing options. When needed, midfielder Jade Bailey, who signed for Liverpool in 2019 from Chelsea Women, dropped back to play in between the two centre-backs, effectively making a back three at times. Therefore, we can see how Liverpool’s defensive tactics really helped them to take control of the game, although Charlton’s lack of attacking threat made it easy for them to do this anyway.

With Liverpool Women scoring four goals without reply, it would be easy to assume that their attack was near-perfect. However, they did struggle to create many clear-cut chances, and made errors with their passing that meant they missed some good opportunities.

With Charlton sitting back and defending, Liverpool were restricted to shooting from areas outside the box, such as here. In this image, Rinsola Babajide has got herself into a good shooting position, but, with the ball having to travel further, the accuracy is not there. This was the main problem with their shooting throughout the game, and their first goal coming from a set piece showed this.

You can also see how, in this image, they did get into these good areas at times.

However, once in these areas, as Babajide is here, they mostly ended up putting the ball over or wide of the goal, meaning that Charlton were not being punished when they let Liverpool in. This match could have been over by half-time, such was Liverpool’s dominance, but they weren’t able to take their chances, and that meant that Charlton were still in the game.

Aside from individual players missing chances, there was also an issue with the passes in the final third, as can be seen in the images below.

In both of these images, Liverpool are in good attacking situations, but the passes in both are overhit, meaning that Liverpool lost time and momentum.

In the first image, the ball has been passed to former Manchester City Women winger Melissa Lawley from Denmark striker Amalie Thestrup, who joined the team this summer from Roma, but it has gone further than intended. Lawley now has to shoot from a wider position than she would have liked, meaning that Charlton have a better chance of getting across to block the shot. Lawley does get the shot away here, but it is saved.

The second image shows another attacking situation, but this time, the ball is being played forwards. However, the pass is again overhit, and you can see how Charlton are looking to close down the second Liverpool attacker, in the yellow circle, stopping them from getting the cross into the box. It is not certain that, if the pass had been more accurate, the ball would have gone into the box, but it is sure that these small errors meant that Liverpool’s goal haul was not as big as it could have been.

Therefore, we have seen throughout this section that, whilst Liverpool won the game comfortably, it could have been even better for them. They are the team that are widely expected to beat everyone else and go back up, but there are teams in the Championship that can cause them problems. It is against these teams that they will need to tidy up some of these situations, as the easier goals that they did manage to get against Charlton may not come against other teams.

The final section of this analysis focuses on something we saw from both teams in parts of this game; pressing their opponents. The image below shows how Liverpool Women did it.

Even though Jess Clarke started as the lone striker, Rinsola Babajide was also moving up to join her at the front, giving Liverpool a front two structure at times. This meant that, when Charlton had a goal kick, as they have here, Liverpool could spread apart and mark their short wide options, forcing the ball to go through the middle or in the air, both of which were easier for Liverpool to win or intercept. This was one area where Liverpool’s attack was set up well, forcing Charlton into thinking carefully about where the ball went.

We have already looked at how Charlton Athletic Women often attacked with one player, but that wasn’t always the case. If we look at the image below, we can see how they sometimes played with two players in the forward line.

The effect of this was that Liverpool couldn’t play the ball forwards, because the player in possession was being very quickly closed down, but they couldn’t go backwards towards their own goal with any ease either, because the player looking to receive the ball was also instantly closed down, and that meant that there was a constant risk of Liverpool giving the ball away in a very dangerous position.

It was not just in attack that Charlton pressed Liverpool. Their five defenders and four midfielders also pressed, and the image below shows one example of them pressing in another area of the pitch.

Here, Taylor Hinds is in possession for Liverpool, but she has no space to move the ball into the box. Her opponent has closed her down quickly, pinning her very tightly to the sideline.

When this happens, it means that defenders can leave as much space behind them as they wish, because, as long as the ball is stuck in small spaces like this, there is no way that it can get into the area easily. Therefore, it is a good tactic to have for teams who are trying to sit back and stop opponents scoring, as Charlton were looking to do in this game.

In conclusion, this tactical analysis has looked at the reasons that Liverpool Women got all three points against Charlton Athletic Women in this Women’s Championship game. We have analysed Liverpool’s defensive tactics, seeing how they managed to keep Charlton back, and have looked at how, despite scoring four goals, Liverpool made some errors in attack that could have cost them in other games, and stopped them scoring more goals in this game. Both sides’ pressing was a key and noticeable feature of this game, with both teams looking to give the other as little space as possible, forcing them into making mistakes with the ball. Liverpool will be happy to have come through what could have been a difficult match, with four goals, three points and a clean sheet, which will give manager Vicky Jepson and her players a lot of confidence going forward.