Manchester City faced a nervous Rotherham side, whose manager Paul Warne held little expectations against Man City for the third round of the FA Cup. His game plan was to have his players “go and enjoy themselves” and hope to surprise Pep Guardiola’s Man City. Guardiola, in contrast, held a more serious disposition for the FA Cup in midst of a hectic winter:

“We are going to play the FA Cup game (against Rotherham) like a final.”

The Etihad finds itself a busy venue with this fixture being the second of four consecutive home games. It’s obvious that Guardiola has faced bigger challenges than grabbing a win against Championship strugglers Rotherham. He accommodated squad rotation to avoid injuries, and auditioning for replacements of key positions in his system. This tactical analysis examines City’s massive 7-0 win with a focus on upcoming non-regular players showing great potential.

When Guardiola’s City face teams that do not counter-press and sit in a deep defensive block, members of the defensive line have greater license to dribble into the half-spaces looking to thread passes into dangerous spaces around the opponent’s penalty box. The attacking midfielders constantly slip into space in front of the opponent’s defence to pin them and play wall passes. The wingers hug the touchline to stretch play.

With City’s current left back problems, 22-year-old Oleksandr Zinchenko has a golden opportunity to challenge for a first-team spot. The Ukrainian indeed proved himself in this game with a remarkable performance. As one of Guardiola’s inverted full-backs, Zinchenko occupied flanks or the half-spaces, depending on his teammates’ positions.

Guardiola’s system of positional play demands a numerical superiority in the middle of the pitch. Here, his players can move the ball around opponents and displace them to create gaps. Since his Bayern days, this overload has been created by full-backs tucking inside who have better chances of delivering key passes. In this game, Zinchenko delivered an outstanding pass accuracy of 97.1%, two of those being key passes.

City’s first goal was a product of Raheem Sterling’s clinical precision and Kevin De Bruyne’s foresighted assist. Nevertheless, Zinchenko also needs due credit for his movement off the ball to create space. This is another important principle of Guardiola’s positional play.

Zinchenko also showed great composure defensively with timely clearances and by winning second balls. He slotted in more centrally when De Bruyne was replaced by Philippe Sandler and Ilkay Gündoğan moved to an attacking role. He makes significant leaps in standards with every game he is picked for.

Phil Foden undoubtedly holds immense potential as a player and is hot property in the current transfer window. Guardiola was vocal about City’s position on Foden in the post-match press conference:

“Phil Foden loan? No way, impossible, he is going to stay with us many years!”

The hype is understandable considering his performance against Rotherham. He has been a Carabao Cup regular this season. This fixture, however, saw greater shades of Pep’s positional play with Foden playing between the lines as an attacking midfielder. City’s 70% possession against Rotherham enabled him to play a big role in maintaining ball circulation in the attacking third.

Foden made movements relative to the positioning of the striker, who often dropped short to play as a false nine. His goal, the second of the game after Sterling’s, was purely positional and hardly technical.

Foden registered his second goal for the first team in a major tournament after the previous one against Oxford in the Carabao Cup. During the second half, he worked with Zinchenko and Sandler to fill in the void left by De Bruyne’s substitution.

Guardiola’s focus on giving youth players minutes in cup fixtures once City have killed the game is ostensible. Philippe Sandler, who joined the youth academy from PEC Zwolle, made his debut for the first team replacing De Bruyne. He partnered Zinchenko as a holding midfielder as Gündoğan moved higher up.

Gündoğan had big boots to fill in since Fernandinho proved indispensable from his involvement in the last few crucial fixtures. With five key passes and four assists as part of City’s seven goals, Gündoğan made a decent impression of the latter.

Kyle Walker sought redemption after Danilo leapfrogged him in Guardiola’s selection pecking order following Walker’s defensive errors against Crystal Palace. Walker did impress, winning a major share of his defensive duels in this fixture. He also alternated with Riyad Mahrez between the right wing and right half-space depending on circumstances.

Walker was the solo architect of the third goal in injury time that came off Semi Ajayi as an own goal. 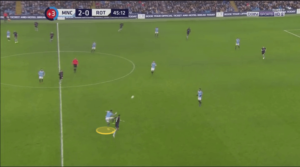 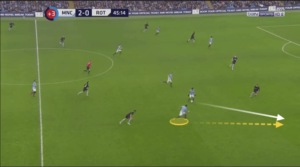 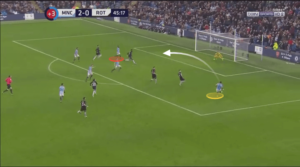 He won an important aerial duel from Marek Rodák’s goal kick, organised a give-and-go with Mahrez and whipped a low cross designated for Sterling at the far post. We see plenty of these low crosses into the box from Manchester City as the final touch to their patient build-up. This particular goal, that sealed the game for Manchester City, exemplifies accurately why Guardiola calls these crosses “half-goals”.

Michael Smith created a handful of chances for Rotherham. Unfortunately his side left it to the final minutes of each half to take risks. Manchester City alarmingly looked very susceptible to the long, high cross, which was also their Achilles heel against both Crystal Palace and Leicester City.

With only two days before the next fixture against Burton in the Carabao Cup, City checked off an important win. They progressed to the next round of the FA Cup, and have been drawn against Burnley. Guardiola’s positional play works to perfection in these fixtures regardless of the selection.

He also fulfils the complicated objective of giving everyone on his squad deserved game time. Zinchenko is proving to be a plausible answer to the current left back dilemma. Walker did likewise in the right-back role challenging Danilo for his spot back. Foden and Sandler, should City manage to secure them, are lucrative long term investments in the Guardiola era and beyond.