With a spot in the last four up for grabs, Manchester United travelled to Leicester City in the hope of making another semi-final. The two were already in a fight for second place in the Premier League but with some silverware there for the taking, the FA Cup was a different ball game. In this tactical analysis, we will look at the tactics of Manchester United and Leicester and our analysis will show the main reasons behind Leicester’s win as they joined Manchester City, Chelsea and Southampton in the semi-finals. 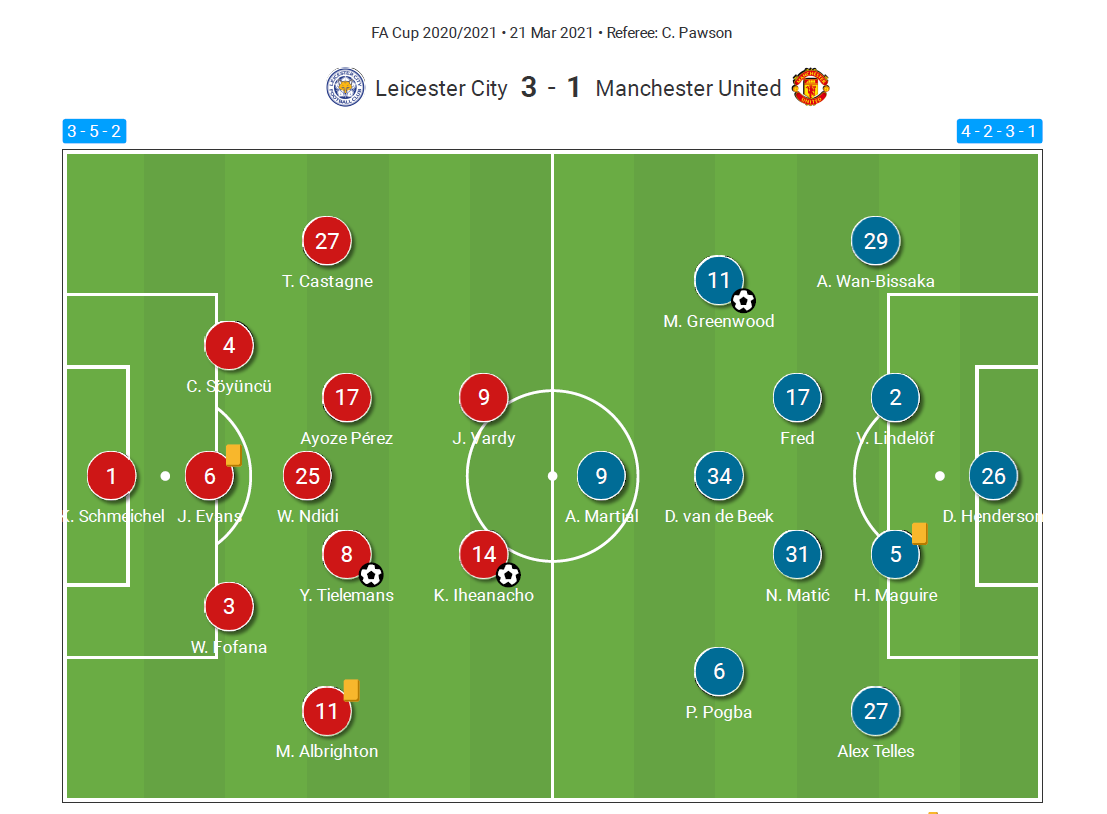 The Foxes started with their 3-5-2 formation, with Jamie Vardy and Kelechi Iheanacho leading the line. Timothy Castagne and Marc Albrighton started as wing-backs with Ayoze Pérez, Wilfried Ndidi and Youri Tielemans starting in central midfield. The back three was made up of Çağlar Söyüncü, Jonny Evans and Wesley Fofana with Kasper Schmeichel starting between the sticks.

As for the visiting side, Dean Henderson started in goal again, having an extended run in the first team. Alex Telles replaced the impressive Luke Shaw while Nemanja Matić, Paul Pogba and Donny van de Beek all started in midfield in what appeared to be a diamond as opposed to the traditional 4-2-3-1 formation. Anthony Martial returned to lead the line, with Mason Greenwood starting down the right as well. With the lineups done, we will now move into our analysis. 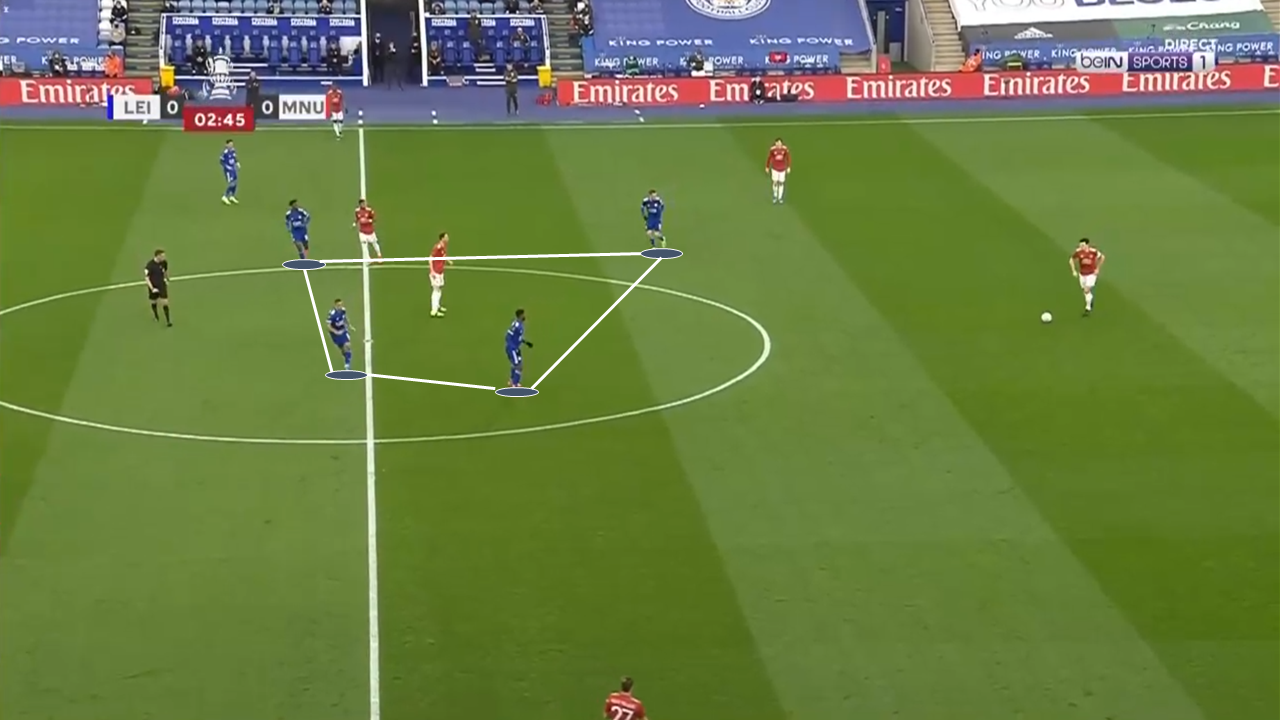 A crucial factor behind Leicester’s success was their discipline off the ball. The 3-5-2 formation would shift to a 4-4-2 with Castagne dropping back to left-back and Tielemans and Ndidi would form the central midfield partnership. The two of them, along with Vardy and Iheanacho ahead would stay compact in midfield and look to cover any pass to Fred and Matić. The front two would not actively press the centre-backs and remain further back to look to cut off the passing lanes while Tielemans and Ndidi were close enough to engage should the ball go through. 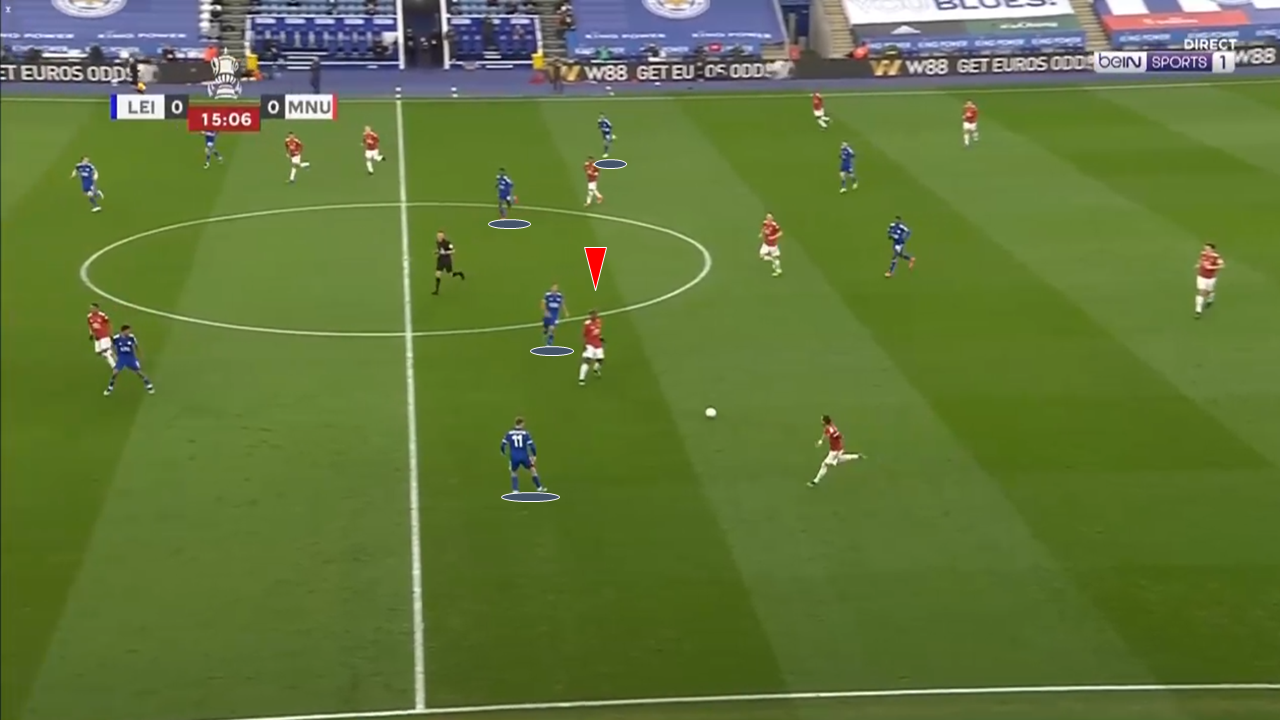 In order to counter this, Pogba dropped deeper for United in order to help the side progress the ball through central areas of the pitch. However, as we mentioned earlier, Leicester maintained a 4-4-2 out of possession and as United switched to a 4-3-3 in certain phases, the Leicester midfield still had an advantage in numbers. The front two still looked to cut off passing lanes to the pivots and this allowed Tielemans or Ndidi to cover Pogba. Pérez and Albrighton also remained compact, meaning that they were close enough to move centrally and cover for their midfield as well. 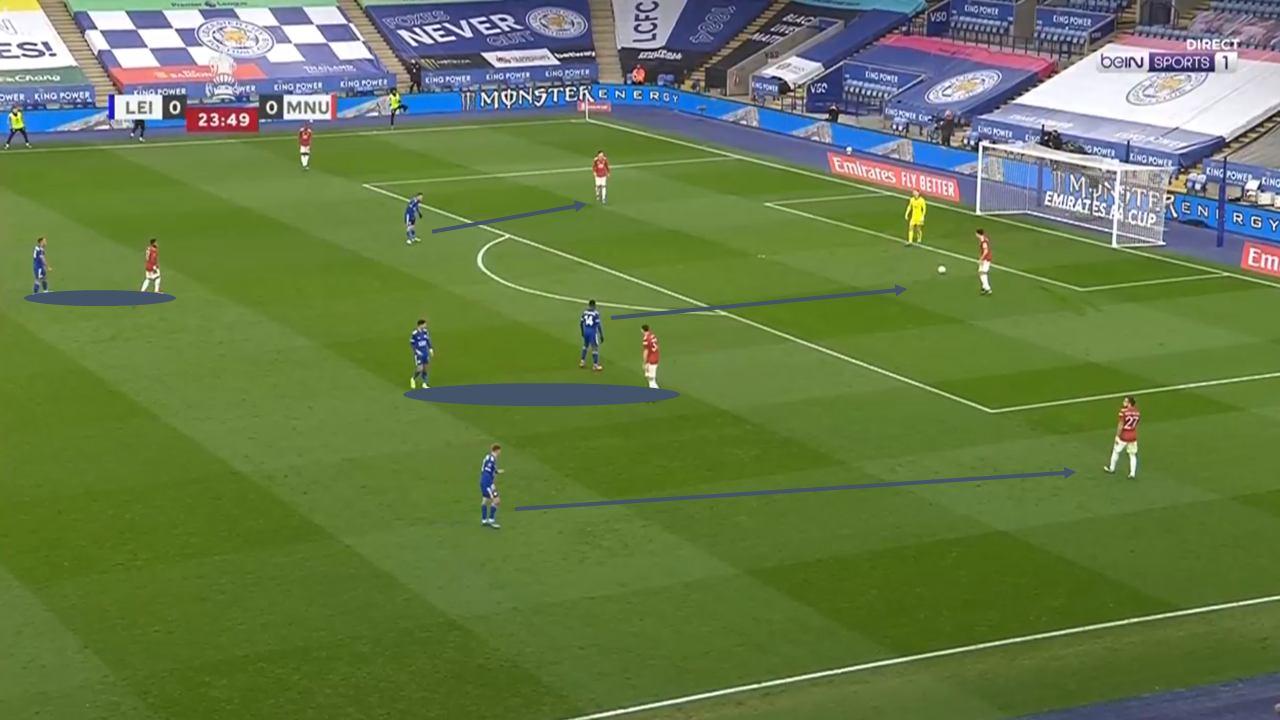 Leicester’s press was in fact crucial to their opening goal as seen above. With the front two ready to press the centre-backs, Leicester ensured that the pivots were marked as well, meaning that an outlet to either of them to ease past the press was cut off. The wingers were also close enough to engage the full-backs meaning that any short passing combination would be difficult. The idea was clearly to force United into long balls for them to contest and win back possession and when United did try to play through the midfield, the pressure on Fred resulted in a miss pass that Iheanacho pounced on before slotting home easily for the opener.

Playing down the channels 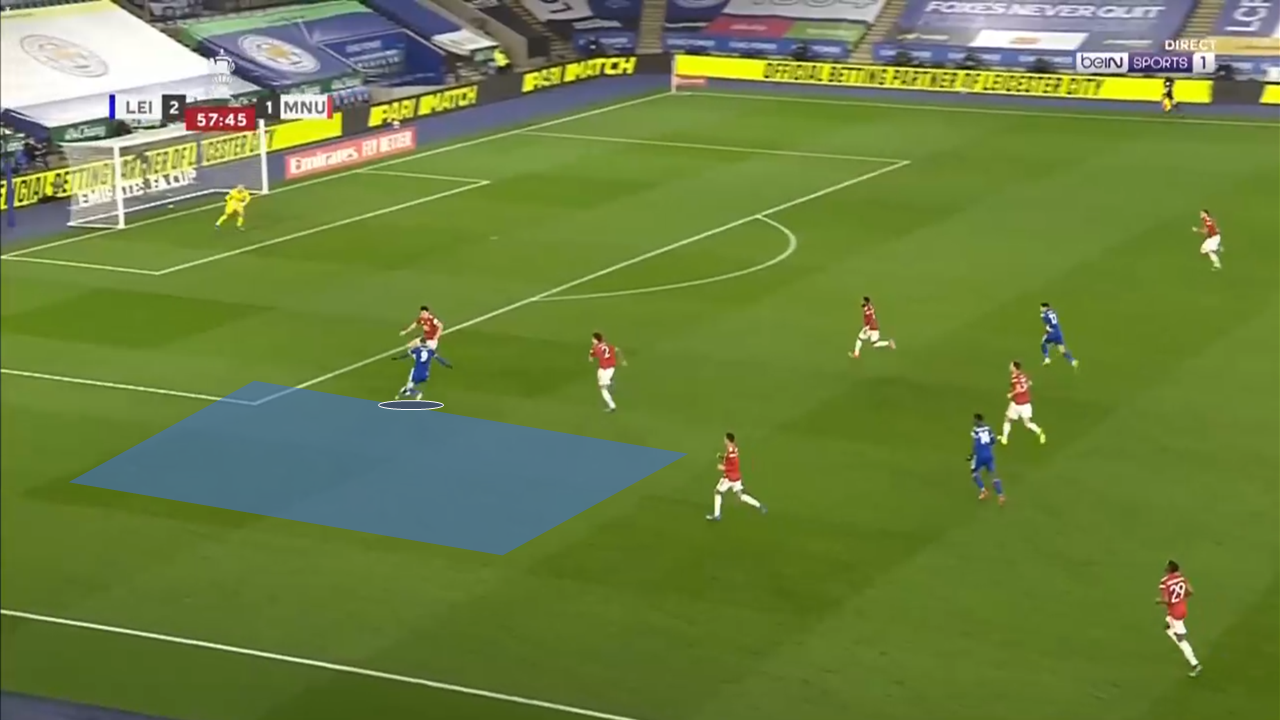 Leicester were set-up to play on the counter and playing it into the channels down the wing were a key part of their tactics. The pace of Vardy and Iheanacho up front meant that they had good runners to move into these channels and exploit the spaces in behind the defence. The full-backs often moved ahead and left large spaces behind them which the midfielders were not able to cover and quick passes into these channels had United scrambling back. 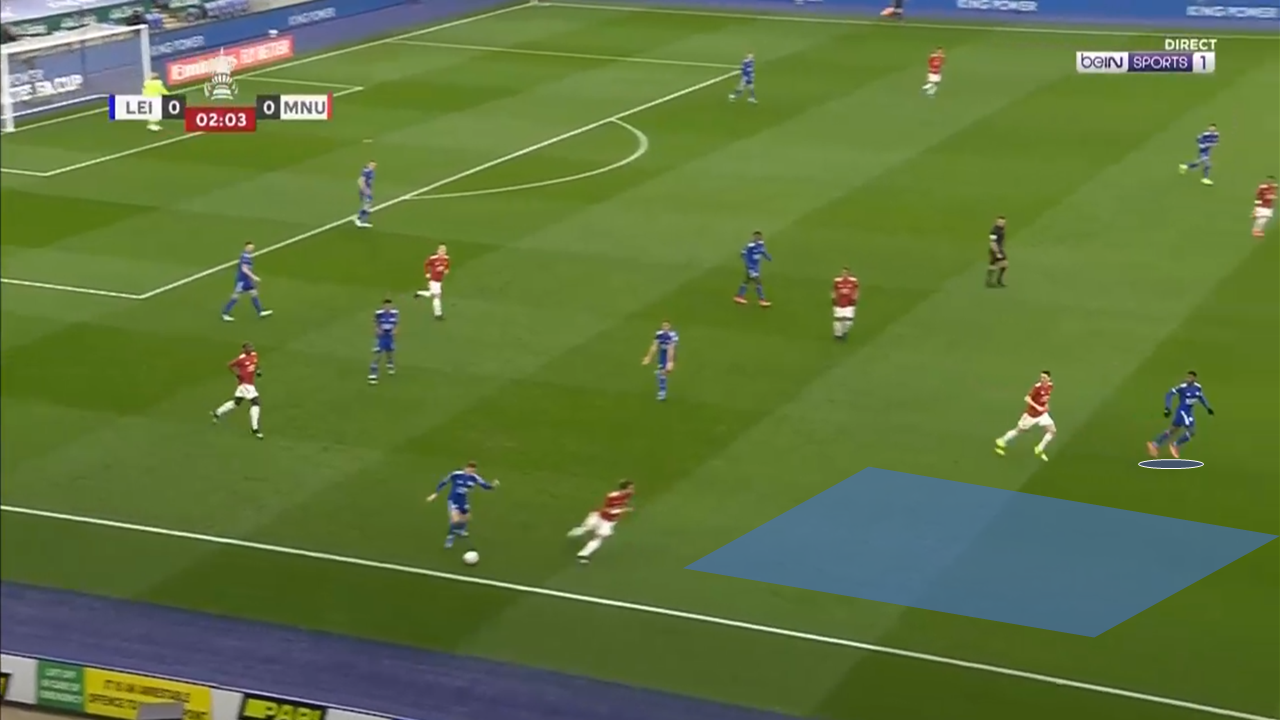 With United pushing forward in possession and committing men forward, they were often caught out with such counters and had to scramble back to defend. The centre-back pairing of United also lacks pace and coming up against Vardy and Iheanacho, who are more than capable of darting past defenders with the ball, was no easy task as the defence found out through the game. 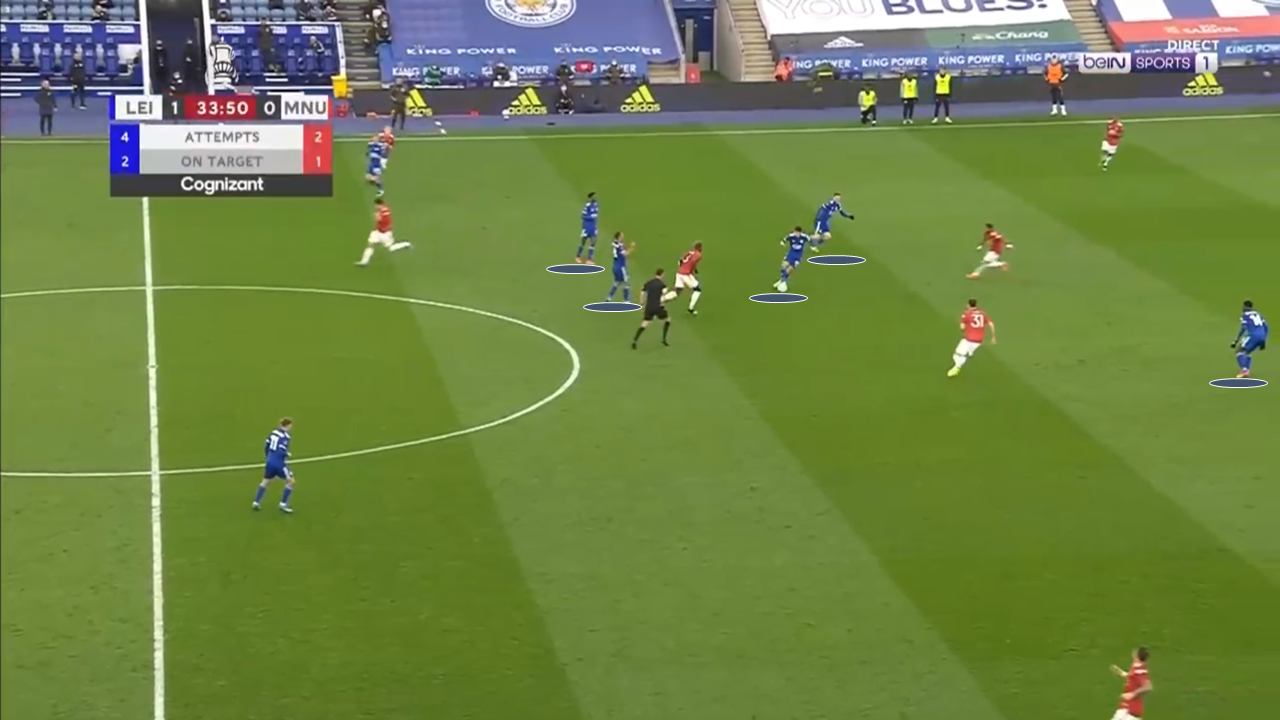 As we said earlier, Leicester’s discipline off the ball was crucial to them winning the ball back in midfield but United’s midfield were not at the top of their game either. The pairing of Matić and Fred often conceded possession and were unable to play through the Leicester press. Even with Pogba dropping deeper to receive the ball, he was not allowed to turn and in trying to do so, found himself tackled and losing the ball. Pérez also moved in towards the centre to help Leicester counter with numbers, as they looked to charge at the defence upon winning possession. 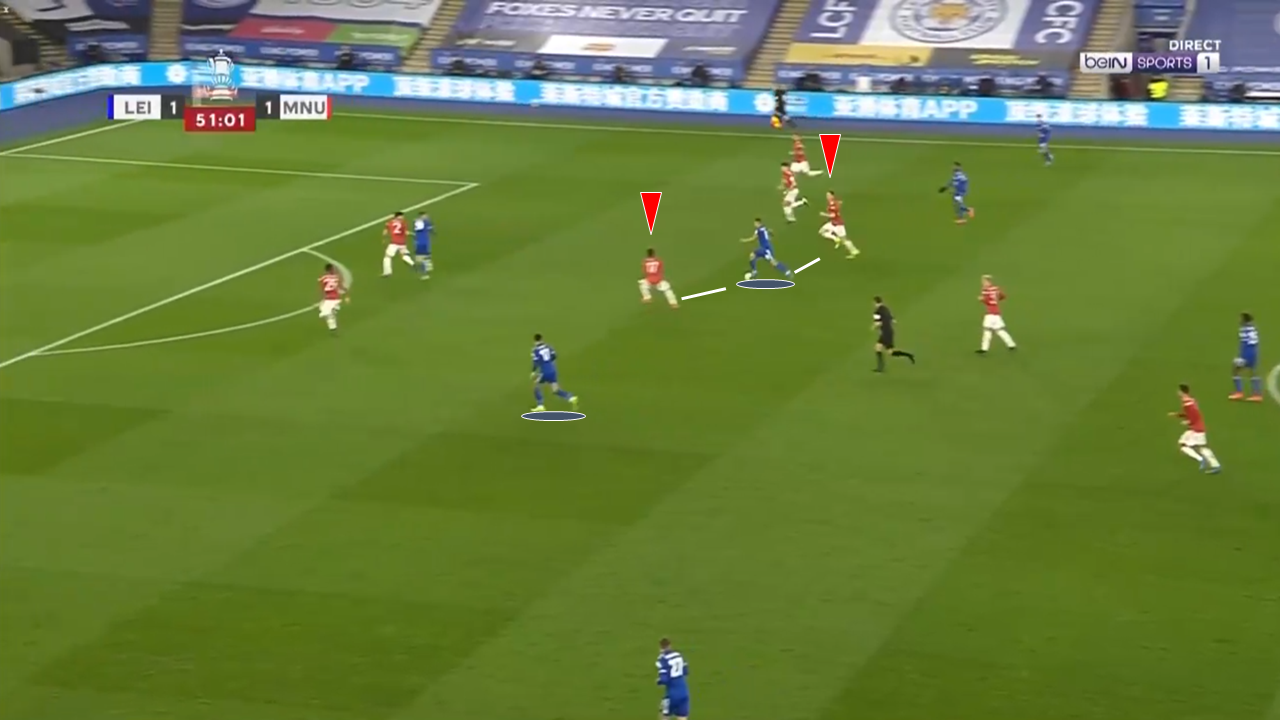 Matić and Fred also found themselves over committing too high up the pitch, meaning that they left space behind them for Leicester to attack. This was perfect for Leicester, as their front two could slot into these spaces and receive the ball as they looked to launch counters. Their clever exploitation of these spaces also led to their second goal as well, with Tielemans allowed ample space to drive into and with the central-midfielders unable to close him down in time, he was allowed a shot which he took brilliantly. Overall, United’s poor performance in midfield was cleverly exploited by Leicester as they marched on to the semis.

It was an excellent result for Leicester, who will face Southampton in the semis at Wembley. They have been going from strength to strength despite injuries this season and look in an excellent position to finish in the Champions League places next season as well. Adding silverware in the form of the FA Cup would surely cap off an excellent season for the Foxes.

For United, it is another cup that they have been knocked out of, this time faltering in the quarter-finals adding to their poor performances in their previous semi-finals. They still have the Europa League to play for this season and despite a good performance in the league this season, their poor cup performances will surely leave a sour feeling among the side. The Europa League is all the more important for the Red Devils now as they look to finish the season strongly.