In the strange world that we are currently living in we had a 2019/20 Europa League round of 16 match taking place over a month after the completion of the 2019/20 Bundesliga and after the first game week of the 2020/21 Scottish Premiership season. Mind-boggling stuff. Due to the Covid-19 pandemic and the resulting reactions from football leagues around the world, we are in a unique and bizarre situation where the majority of the Europa League and UEFA Champions League matches are being played at the end of the domestic campaign – or at the beginning of a new one in Rangers’ case. Before the break Rangers hosted Bayer Leverkusen at Ibrox with the German outfit winning the tie 3-1, giving them a strong away win to defend back in their homeland. Steven Gerrard’s men had it all to do, with Rangers having to score a minimum of three goals without reply to progress. Ultimately Rangers were outplayed on Thursday night, with Peter Bosz’s side dominating possession throughout and not giving the opposition the slightest chance of getting back into the tie.

In this tactical analysis, I will produce an in-depth analysis of the tactics employed by both Gerrard and Bosz and provide a tactical insight into some of the key tactical elements of the match.

Bayer Leverkusen lined up in a 4-2-3-1 with Lukáš Hrádecký between the sticks and behind a back four of twins Lars and Sven Bender, Edmond Tapsoba and Daley Sinkgraven. A double pivot consisting of Charles Aránguiz and Exequiel Palacios allowed the attacking influence of an attacking three of Kai Havertz, Florian Wirtz and Moussa Diaby, with talisman Kevin Volland leading the line.

Gerrard set his Rangers side up in a 4-3-2-1. Veteran Allan McGregor started in goal with captain James Taverner and Borna Barišić as full-backs flanking Connor Goldson and Filip Helander as the team’s centre-backs. Ryan Jack occupied the number six position with Joe Aribo and Steven Davis either side as the number eights. Ryan Kent and Brandon Barker lined up behind, Lille linked, Alfredo Morelos.

Both sides had a few injury problems coming into the match with Bosz missing Nadiem Amiri, Paulinho, Kerem Demirbay and attacking full-back Mitchell Weiser. Gerrard was unable to select Jermaine Defoe, Glen Kamara, or Nikola Katić in his matchday squad. Romanian Ianis Hagi was named on the substitute bench. 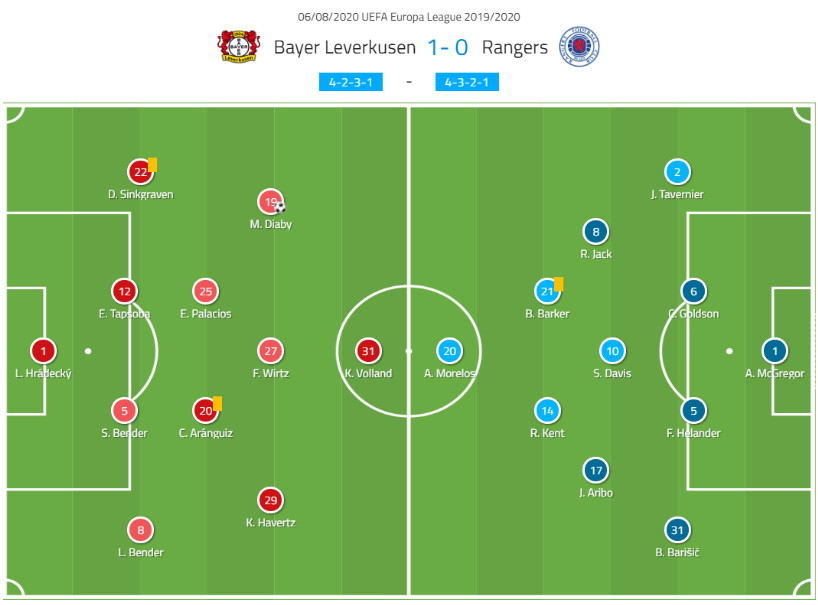 Bayer Leverkusen dictated play, both in and out of possession

It was always going to be tough for Rangers but when an opposition team dictates the game as well as Leverkusen did, sometimes you must hold your hands up and admit they were the better team on the day. A key aspect was the ability to pull the Rangers players out of their defensive structure to create gaps in between the lines.  We can see a great example of this early in the match below. 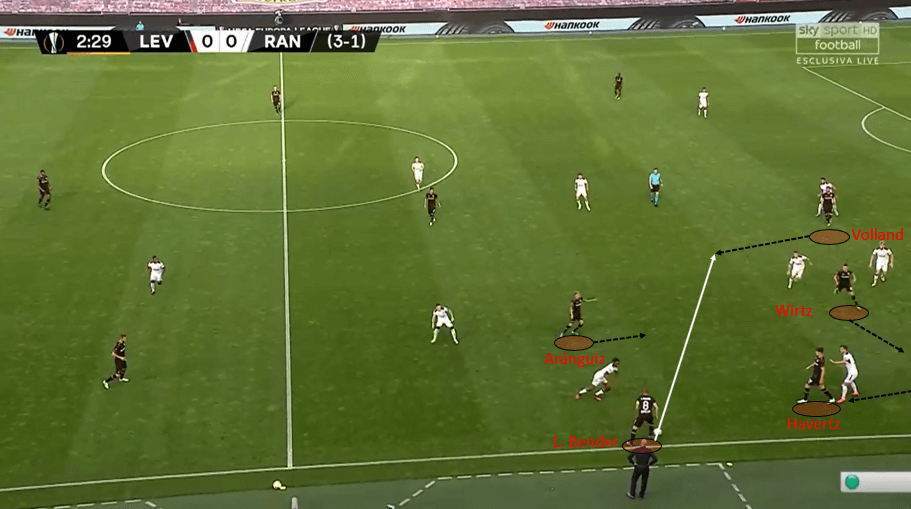 Lars Bender has the ball and to progress play through the Rangers midfield, several of his teammates make pre-determined movements to create space centrally for Bender to play the ball into. Havertz makes a run towards the ball, which drags Rangers left-back Barišić along with him. Wirtz moves into the space that Havertz vacated which pulls both Helander and Davis away from the central area, which allows both Aránguiz and Volland to make runs centrally to receive the ball in a dangerous central area.

This created problems for Rangers. the Scottish outfit were struggling to keep track of the intelligent off-the-ball movement of Leverkusen and on many occasions, Leverkusen were able to combine centrally before playing a ball in behind the Rangers backline for an attacker to run onto. We can see an example of this in the following two images. 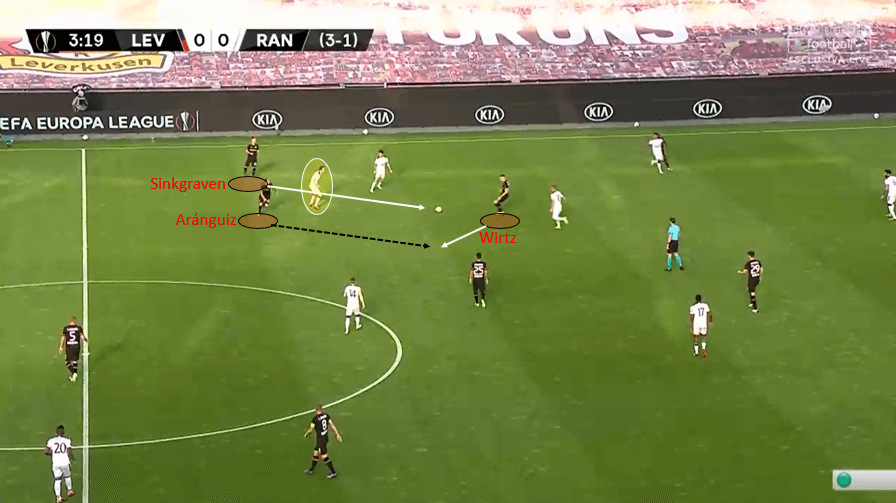 In this first image, we see Sinkgraven play a pass that splits two Rangers players into Wirtz who plays a first time pass into the path of Aránguiz, taking the highlighted Rangers player out of the game in a very simple but effective manner.

The following picture shows the next passage of play as Aránguiz passes to Havertz, who plays a first-time pass into the path of Palacios who is able to attempt a through ball in behind for Volland to run onto, once again leaving the highlighted Rangers player stranded and out of the game. 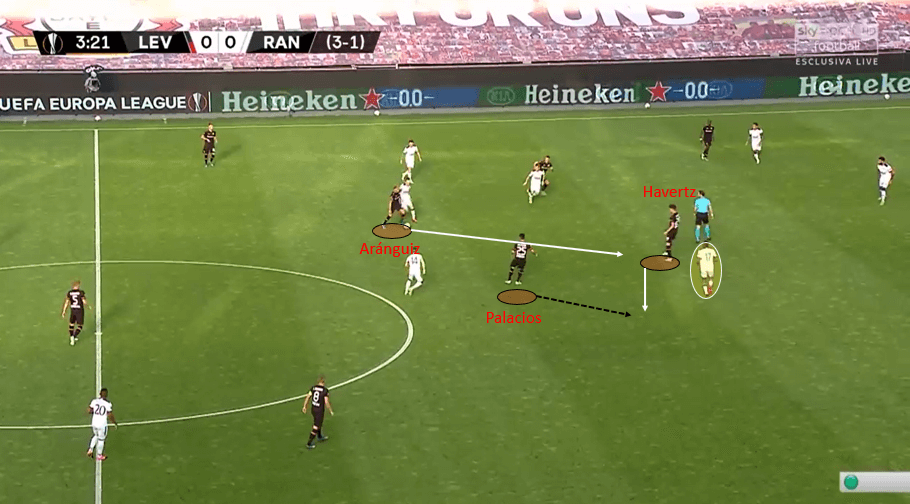 Bayer Leverkusen dominated the first-half and had an average of possession of 69%. Rangers were struggling to have an impact on the game and a large factor in this was the high-press by Leverkusen.

If we look at the following two images which shows all of Rangers losses, we can see just how influential the Leverkusen press was. 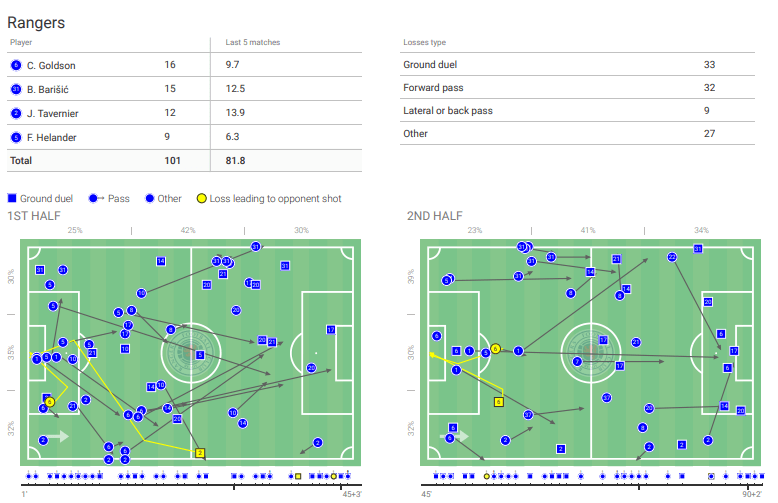 It is no coincidence that the four players that lost the ball most for Rangers are the four defenders, with 32 of the 101 losses coming from failed forward passes. If we look at the image above and, particularly the first-half, can see that there were numerous losses in and around Rangers’ own penalty area. Two of the losses led to Leverkusen shots.

The following image shows us the PPDA of the match, for those not familiar PPDA (passes per defensive action) is an effective way of measuring a team’s pressing intensity. Bayer Leverkusen’s PPDA was incredibly low, particularly during the first-half. For reference, well-known high pressing sides such as Liverpool and Manchester City average a PPDA around seven. Bayer Leverkusen had moments where their PPDA was as low as four. Leverkusen were able to do to Rangers what Gerrard’s team does week-in, week-out in the Scottish Premiership. Press them into submission. 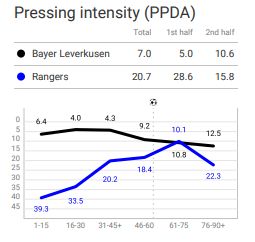 Rangers were unable to get a foothold in the match and this can be proven further by looking at the possession statistics for the match. Leverkusen’s average possession duration was double that of Rangers (21 secs to 11 secs). During the entire match, Rangers only retained possession for more than 45 seconds on three occasions. Leverkusen had 12. 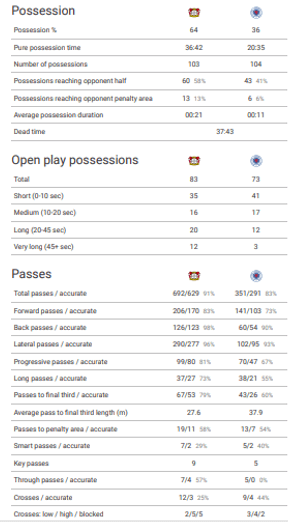 Another prevalent stat from the above is that despite having one more possession than Leverkusen, Rangers were only able to reach the opposition half 17 fewer times than Bayer Leverkusen.

Rangers were outplayed and dictated to by Bosz and his dynamic and fluid attacking system. And Gerrard’s players were not able to cope with being rushed and harried into mistakes by Bosz’s hard-working and intelligent players.

Rangers are relatively well-known for their creative influences being the full-backs, Tavernier and Barišić. The duo accumulated 13 assists between them in the 2019/20 Scottish Premiership season. On many occasions, Rangers would look to overload these wide areas and have the full-back make an overlapping run. We can see a great example of this below.

Barker faces up Leverkusen captain Lars Bender, with Barišić making a late run to overlap Barker. Barišić’s movement creates doubt in Bender’s mind, and he decides to follow the Croatian’s run down the line, which gives Barker a brief window to cut inside and exploit the half-space. 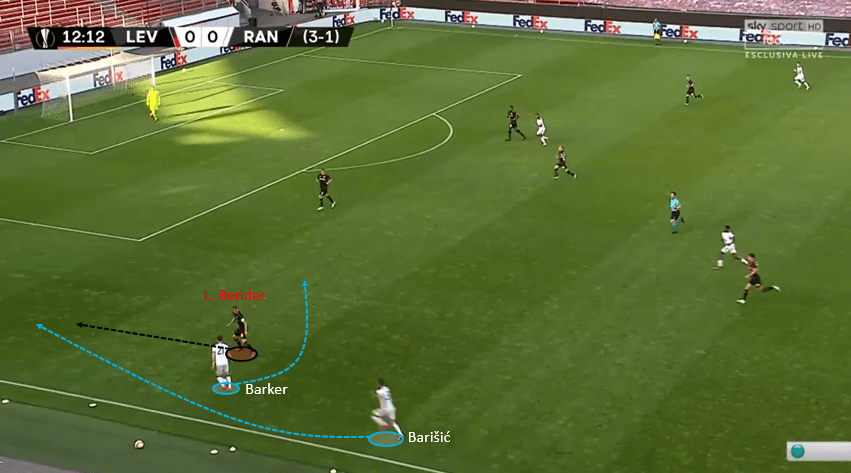 If we look at the average positions of Rangers, it becomes clear that the two full-backs (numbers 2 and 31) push higher up and contribute to the attacking phase. 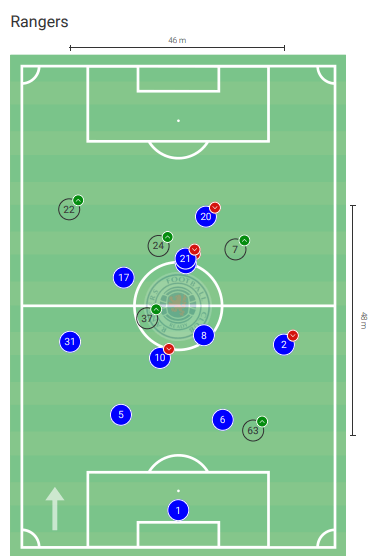 Despite Rangers wanting to overload the wide areas and get crosses in, they managed just four accurate ones in the match. This was mainly down to Leverkusen doing their homework and very rarely being exposed where they were overloaded, a good example is shown below. 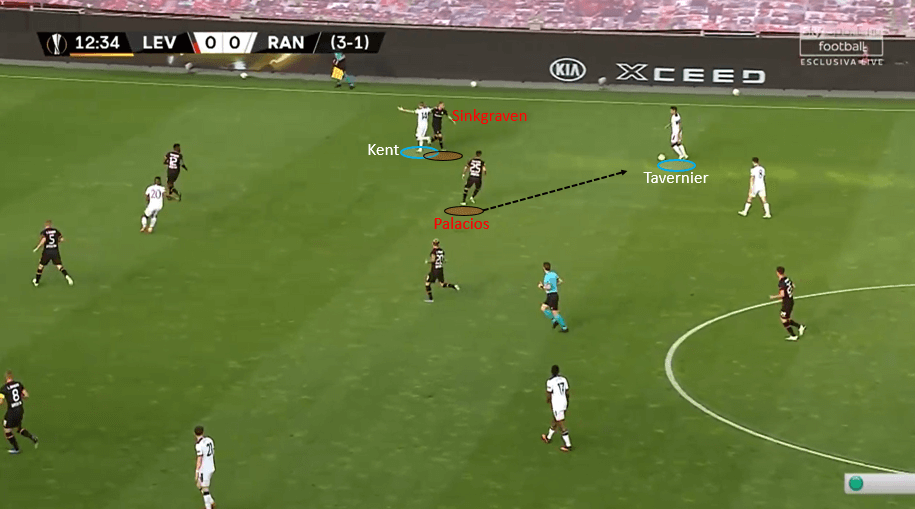 Sinkgraven man-marks Kent ensuring he is unable to receive a pass, whilst Palacios closes down Tavernier, denying him the space to cross from a deeper position. This action of going man-for-man and denying Rangers the chance to create chances out-wide was a key reason why Rangers struggled to progress the ball into the final third.

Upon realising that they were having no joy out-wide, Rangers attempted to be direct and quickly get the ball forwards as quickly as possible in transition, with the aim to get Morelos in behind. An example is shown below.

Jack quickly gets the ball forward to Barker, who turns his man and plays a pass in behind for Morelos to chase. 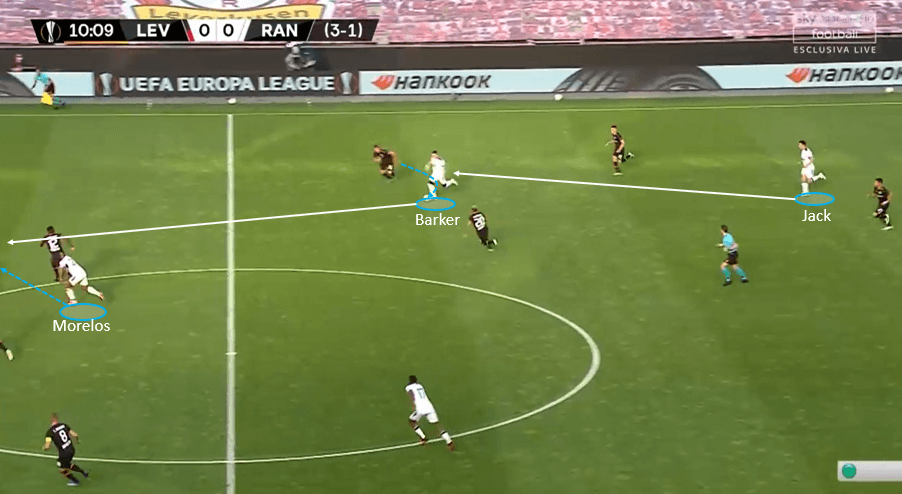 The brilliance of Kai Havertz

Havertz is widely regarded as one of the most promising young attacking midfielders in world football currently. His brilliance was on show during this game. On many occasions, he picked up pockets of space in between the lines and caused Rangers plenty of problems.

Despite not scoring, he posted the highest xG for any individual player, as shown below. 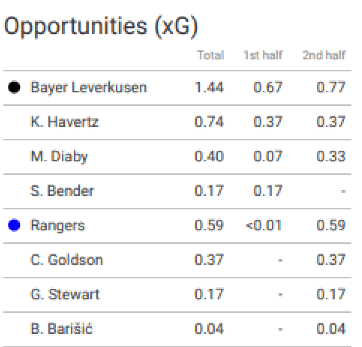 The German would frequently run beyond striker Volland and almost play as a second striker, that Rangers would struggle to pick up. The image below from the first-half where Havertz had a great chance to give Leverkusen the lead.

Havertz makes a darting run from deep in between Helander and Barišić and neither player picks him up, as Palacios plays a perfectly weighted through ball into his path, which Havertz put just wide of the post. 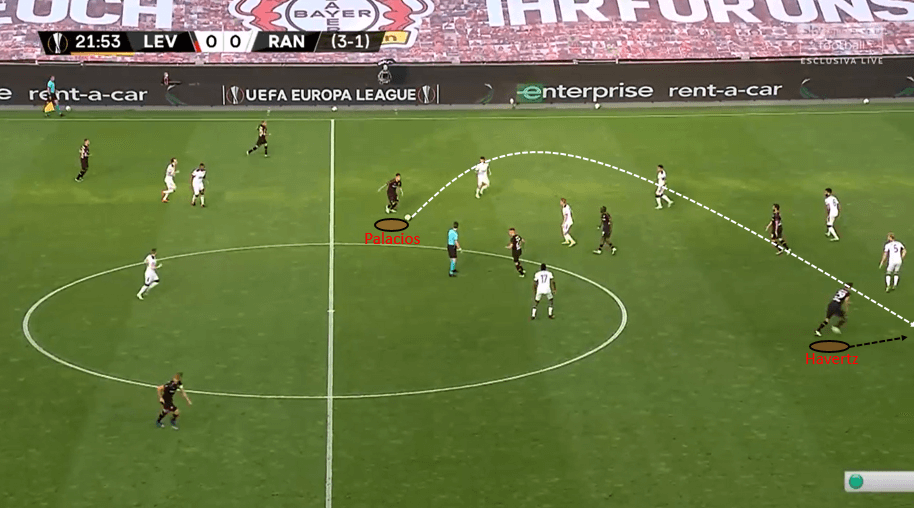 We can see another great example of how influential Havertz’s run from deep were in this game. Volland lays the ball off Wirtz, who plays a pass in behind the Rangers defence for Havertz to run onto.

If it were not for some poor finishing Havertz could have quite easily had two goals in this game. He was a driving force behind Bayer Leverkusen’s attacking play. 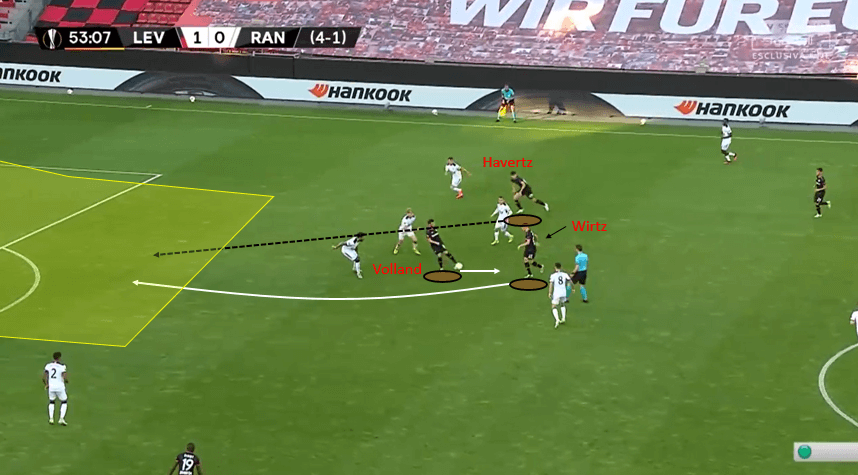 A great game that was dominated by Bosz and Bayer Leverkusen, their game plan to dominate the ball and deny Rangers to build any momentum in the match was a key factor on the result. Havertz was arguably the best player on the pitch and probably should have scored two goals.

Bosz tactically out-smarted Gerrard and ran out 4-1 winners on aggregate. Which is no disgrace to Gerrard and to Rangers. Bayer Leverkusen finished fifth in the Bundesliga which is probably a level too high for Rangers to compete against.

Bayer Leverkusen move onto a highly-anticipated quarter-final clash with Inter Milan, whilst Rangers can concentrate on building on their 1-0 win over Aberdeen in the first game week of the season.