After a gruelling 2-4 loss to bitter rivals The Netherlands, Germany travelled to Belfast to take on Northern Ireland in the 2020 European Championship qualifiers. Die Mannschaft were looking to hand the Green and White Army their first loss in this edition of the competition. This tactical analysis will look at the tactics implemented by both sides, including Northern Ireland’s aggressive pressing and Germany’s counter-attacking inefficiency. 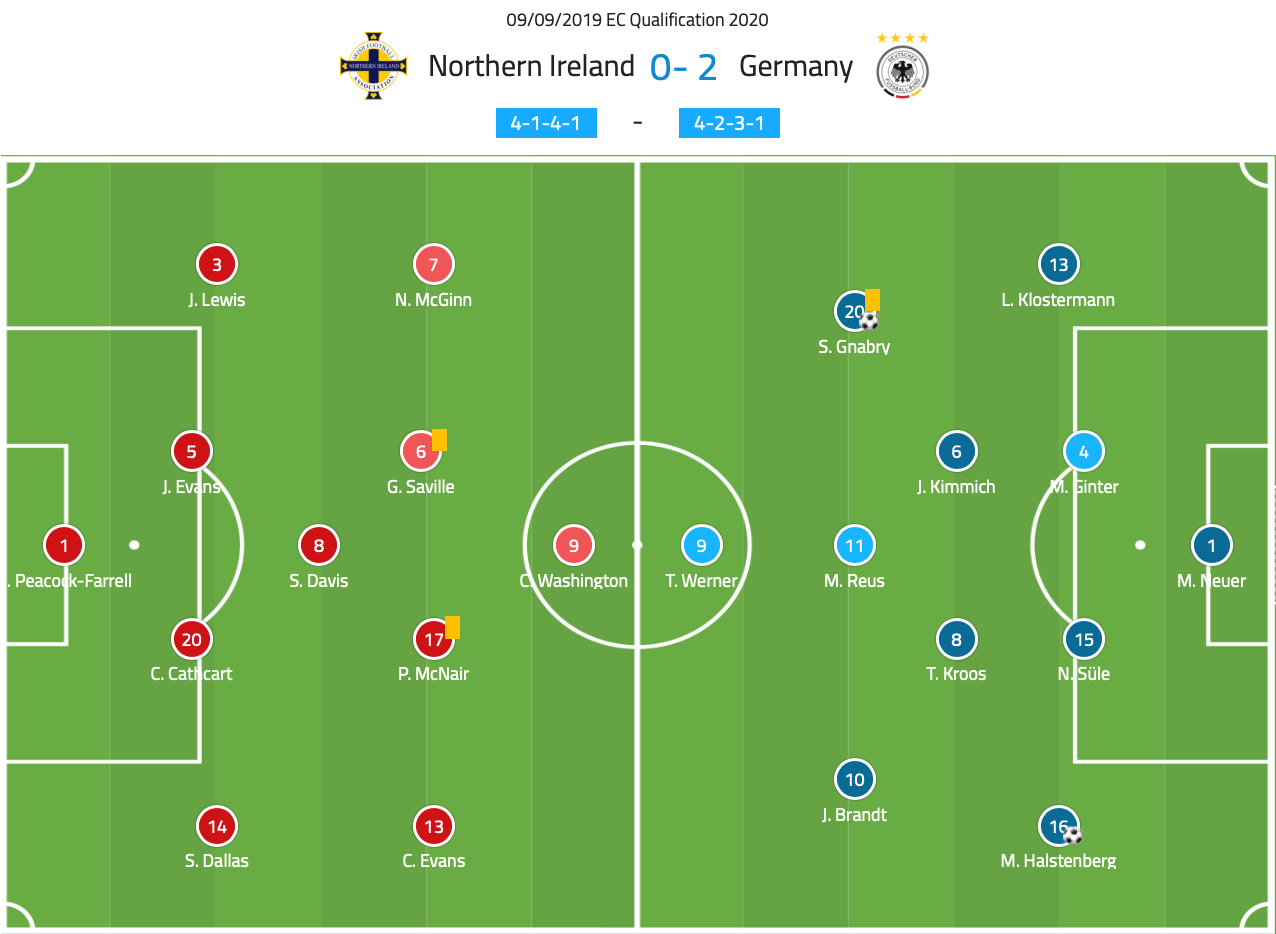 Manager Michael O’Neill deployed Northern Ireland in a 4-1-4-1-/4-3-3 system. His team would not control a majority of the possession, but the style in which they played would not portray a side focused on defending in their own half either. 22-year-old goalkeeper Bailey Peacock-Farrell, who has yet to play for Burnley in the Premier League this season, made five saves in a stellar performance.

Meanwhile, Löw opted for a deeper-lying formation from which to counter-attack. The hotly-debated decision to play Joshua Kimmich in the midfield instead of the right-back position continued its controversiality, as the midfield was a point of concern for Germany this match. Additionally, Leipzig full-backs Lukas Klostermann and Marcel Halstenberg started the match and played as additional components of Germany’s quick ball progression.

With this pass, the two pressing players closest to Kroos use the touchline as an additional defender, and trap the midfielder. He panics and attempts a long pass to the opposite side of the pitch, which is picked up by Washington. Manuel Neuer, who had a strong performance, made an excellent save to prevent an early home goal.

This wide press continued throughout much of the match, with Germany attempting counter-attacks to combat the defensive strategy. These attacks are examined later in this analysis.

The success of Northern Ireland’s press varied however depending on the area in which the press was committed. As seen in the map above, Germany’s possession in the wide areas was limited well by the press. This is partly due to the ability to use the touchline as a restraint in a press. When the visitors were able to hold the ball centrally however, Northern Ireland rarely attempted a press, choosing instead to defend with the more conservative approach of a lower block.

One theme evident throughout this match was the exploitation of wide and central areas of the pitch. In cases similar to the instance below, Germany attempted to get around the compact block using switches of play into dangerous areas, thanks to more possession in the opposing half.

On few occasions, Germany were able to use both the wide and central areas, including on the opening goal.

With Kroos holding the ball in a central area, Northern Ireland were positioned in their own half. A small pressing movement by the midfielder allowed Kroos to complete a forward pass to Serge Gnabry in a central attacking area with space.

Gnabry was able to turn and progress the ball forward. With Northern Ireland in a compact shape, the full-backs Klostermann and Halstenberg were able to do what they were intended to do: push forward in attack into the open spaces aside a compact back line. Gnabry passed the ball wide to Klostermann, who sent in a cross. The cross was deflected toward the opposite side of the pitch, and seconds later Halstenberg scored his first international goal.

This central play relied in large part on the build-up ability of the deeper midfielders Kroos and Kimmich. The idea of playing Kimmich centrally in midfield instead of out wide along the backline is to initiate counter-attacks more quickly, using the German’s excellent defending and progression ability to gain possession of the ball and push it forward to the attackers. This, along with abundant passing from Süle, Jonathan Tah, and Kroos, allowed a majority of Germany’s counter-attacks to begin centrally.

The two fundamental parts of a successful counter-attack are relatively simple: initiate an attack typically from your own defensive half into open space behind the opponent, and finish the attack by creating a goal quickly before the opponent can drop back and reorganise defensively. Germany had varying issues in both sequences (they struggled with both against the Netherlands as well), though they ultimately succeeded due to the number of opportunities created and the drop in form from Northern Ireland. After the first goal, Germany’s counter-attacking ability drastically improved.

The low block above is often used in a counter-attacking system to lure the opponent into space in your own half, thus creating space behind the opponent.

Once the ball is possessed, quick progressive passing is ideal to complete counter-attacks. As stated, Germany excelled at this sequence in the second half, using switches of play and quick passing from the attacking players. The figure above is an example of both, with substitute Kai Havertz assisting Gnabry after a switch of play.

Gnabry has been one of the most consistent players in a recently inconsistent German side; he scored his ninth goal in just 10 matches for the national team. This reliability is refreshing for Germany. Even throughout this match the Germans were lacking sharp accuracy. Germany totalled 21 shots, with seven on target and nine blocked. This lack of precision has been haunting them as of late. For example, Werner had five shots, including three on target. Before the 2018 World Cup, he had scored eight goals in just 14 matches for Germany. Since then, he has only scored two in thirteen appearances. Despite the drop in efficiency for the national team, he has been highly prolific for Leipzig, including scoring five goals in just three matches this season under new manager Julian Nagelsmann. If he can continue that level of productivity under the prodigious boss in his adaptive system, the goals for the national team may finally follow.

Germany held on regardless and came away with a valuable three points. The defensive skills of Neuer, Süle, and Tah played a major part in preventing any comeback from Northern Ireland.

Seemingly ever since the 2018 World Cup, Germany have been less efficient and more unstable than they are historically known to be. In this match, Northern Ireland began well utilising the press and were the better team for the first half. Germany eventually proved their technical quality, but it still felt rather uneasy and unpolished. Nevertheless, Germany can feel confident heading into the final rounds of European Championship qualifying. Northern Ireland, despite the strong start the qualifying, must hold off the Germans again after battling the Netherlands twice to reach the prestigious tournament.