Another English league season began as Leicester City faced Manchester City in the Community Shield 2021 last Saturday. The two teams were separated by a one-goal margin scored by the former City striker Kelechi Iheanacho who won and scored the penalty. This was Pep Guardiola’s first time to lose back-to-back finals in his coaching career, for those that count the Community Shield as a proper trophy.

Although City did not select their strongest XI due to different reasons, this was still a good team with key players in the lineup. The tactical analysis will reveal City’s struggle to create chances and analyzes the impact of the most expensive English player in history – Jack Grealish – briefly.

Brendan Rodgers mostly selected experienced and trusted veterans who played under him in the last campaign. Harvey Barnes returned from injury and started with a new number. The only new player in this team was Ryan Bertrand, who left Southampton as a free player and filled the left-back position.

Manchester City had youngsters from the academy starting such as Cole Palmer and Sam Edozie. They also had players who rested in the summer as the likes of Benjamin Mendy, João Cancelo, Fernandinho, and Riyad Mahrez were free from national team duties. This was still a strong selection that could compete with most Premier League teams.

Leicester began the game by shifting the defensive shape between a 4-2-3-1 and a 4-4-2. Each player had clear duties and they were trying to limit spaces for City to play in the centre. The players were very disciplined and the deep positioning of midfielders prevented spaces in front of centre-backs being exposed. 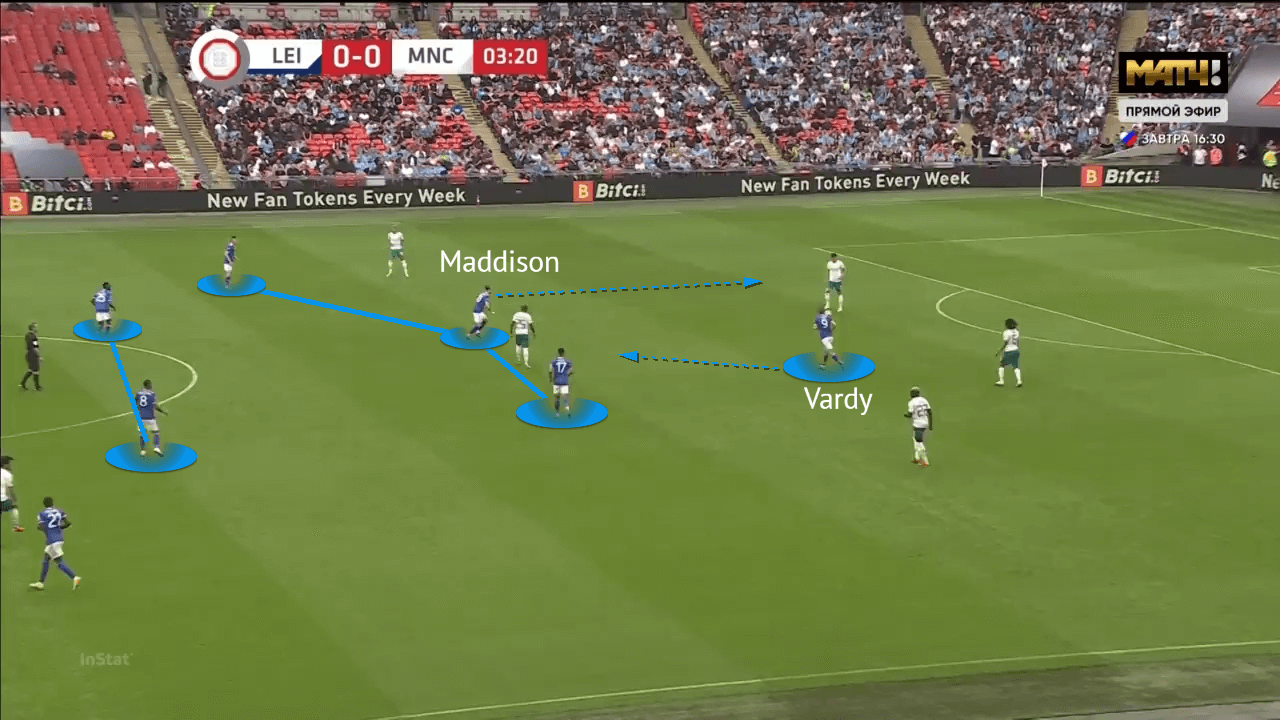 The first image outlines the 4-2-3-1 defensive scheme of Leicester. They were not pressing very high and not intending to win the ball from centre-backs, but pressure must be applied on the ball consistently. In the centre, Jamie Vardy and James Maddison were tasked to defend the centre-backs of City, but the priority was to mark Fernandinho tightly to limit his room to play. Hence, you could see shifting in this scenario. When Maddison goes out to press Rúben Dias, Vardy must get tight on Fernandinho so City could not break lines easily.

The above setup would result in a free City centre-back in the build-up. However, the Premier League Champions could not maximize the advantage given Nathan Aké’s limited ball-playing ability. We will provide more in-game examples with analysis in the article.

Another feature of Leicester’s defence in this screenshot was the compactness. Since City’s full-backs were playing narrow in the construction process, Ayoze Pérez and Barnes were also staying in the centre. The compact second line of defence would allow the midfielders to stay deep and dominate spaces in front of centre-backs.

Pep and his coaching staff’s game plan was to pin the opposition back four with a wide and high front three; Edozie, Mahrez, and Ferran Torres. Then, the remaining part of the team could enjoy a 7v6 numerical overload over Leicester’s midfielders and strikers. As we drew in the above image, the numerical superiority was on the right of the backline.

Since Pep was highly aware of the transition threats of Leicester, he was reluctant to concede space behind the full-backs when attacking. Therefore, Cancelo and Mendy played narrow as the inverted full-backs and deep in their own half. They rarely dropped Fernandinho between the centre-backs as the skipper was expected to move into spaces behind the first line, linking the attack to players in front.

City also wanted to stretch the Leicester defensive midfielders and open the vertical passing lane to Torres in the centre, which was reflected through Palmer and İlkay Gündoğan’s positioning in the above image.

At the beginning of the game, Gündoğan played more centrally and occupied the higher left half-space. However, the German international found it difficult to get touches as City were unable to break the lines, or the passes were simply poorly executed under pressure. This was the reason for Gündoğan drifting wider to receive outside of the block as the game developed.

With these setups, we could actually view the positional structure of City from another angle. Apart from the 7v6 overload mentioned above, in zone yellow, where Leicester had two midfielders in the 4-2-3-1, City had a 3v2 overload when Torres dropped. That meant a free player was always in space behind the midfield and releasing him would help City moving into the final third smoothly.

But this was the struggle of City, they rarely utilized the numerical superiorities in this game. For example, even Fernandinho was pointing at Gündoğan in this image to tell Aké the direction of the free player yet the pass was going in the opposite direction. Perhaps this was also attributed to Mendy’s role as an inverted left-back, the former Monaco player was unnatural in the centre. Sometimes he was staying too close to Aké, and sometimes he should be doing more to move Pérez away, opening the passing lanes for others. 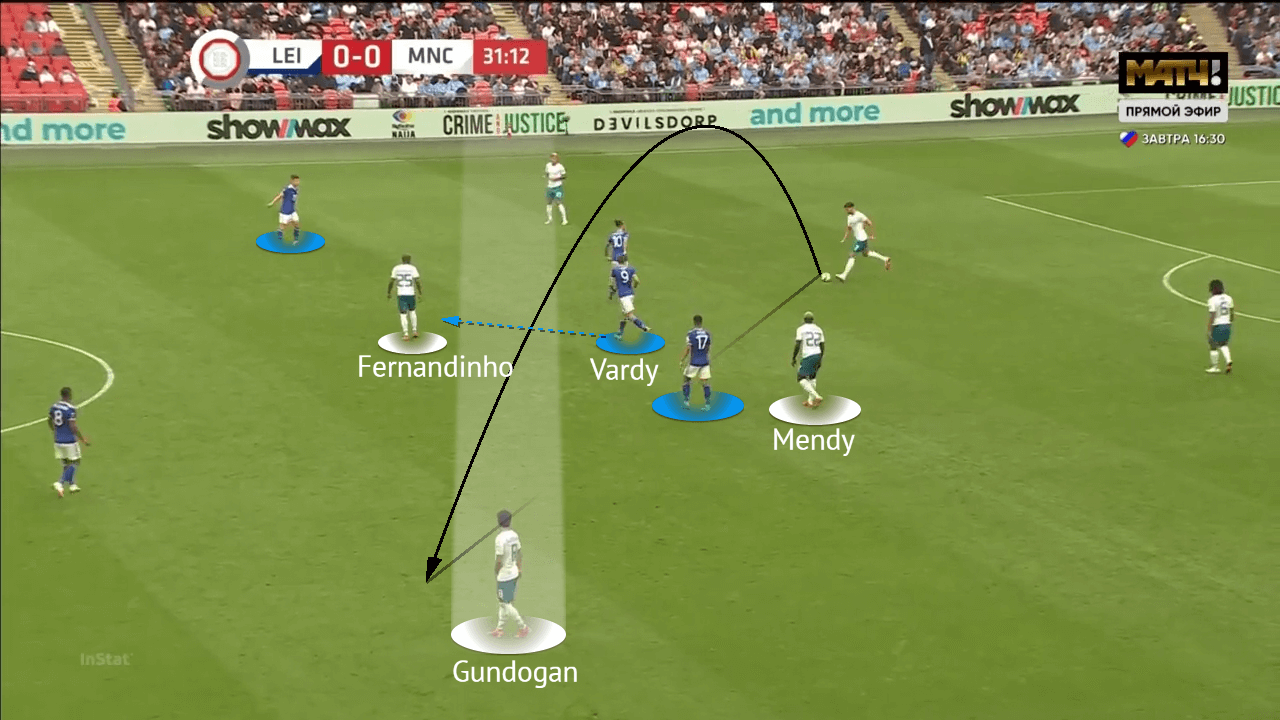 If City were finding Gündoğan in the construction of the attack, they mainly used lofted balls or chipped passes. However, they were too difficult to control, and Leicester would be already tracking back.

In the above example, you could see the positional structure that freed Gündoğan on the left side. With Vardy tracking Fernandinho, and Pérez defending Mendy narrowly at the centre, Dias had some space to ping the ball as Maddison was often late to press. But City could not further progress as the deep Foxes midfielders, Youri Tielemans in this situation, would be jumping out to press.

And here was the problem when City had Gündoğan deep and wide – no instant support could be offered to the left-winger after a switch. Specifically, City gave up the occupation of higher left half-space because of the positioning of Gündoğan, which adversely affected the chance creation in the final third.

Edozie had a good preseason in general, but his game was below par in the Community Shield. Since he was isolated on most occasions, a dribble was usually the only solution, but he did not offer enough threat. From his 10 dribbles of the game, only two of them were successful. Pereira barely had any problem in the first half. 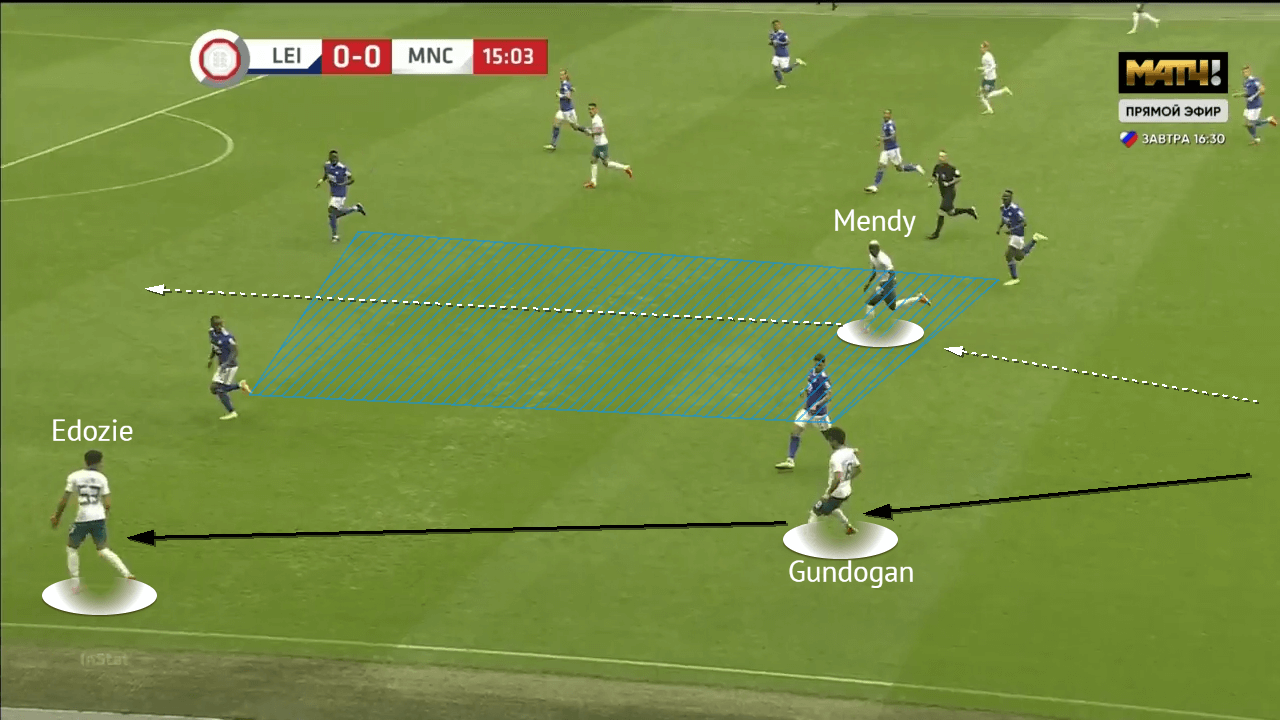 Maybe the plan of City was to get Mendy running in the vacated half-space when Edozie had the ball. In the above situation, they moved the ball forward by the positional structure we explained in this analysis.

Gündoğan, after freeing himself on the flank, could easily connect Edozie on the wide right. Now, you could see Mendy was sprinting in the half-spaces and completely outran Pérez. When he arrived in the space behind the defence, he would be offering Edozie an additional option, also pulling the centre-back out of position. However, the Frenchman left-back was not providing this energetic run enough in this game.

In the second half, Pep did not make significant changes but mainly tweaked the role of the wingers. This helped City to generate more threats after the break and the introduction of Grealish dropped some hints on how he would play in the early days at City. 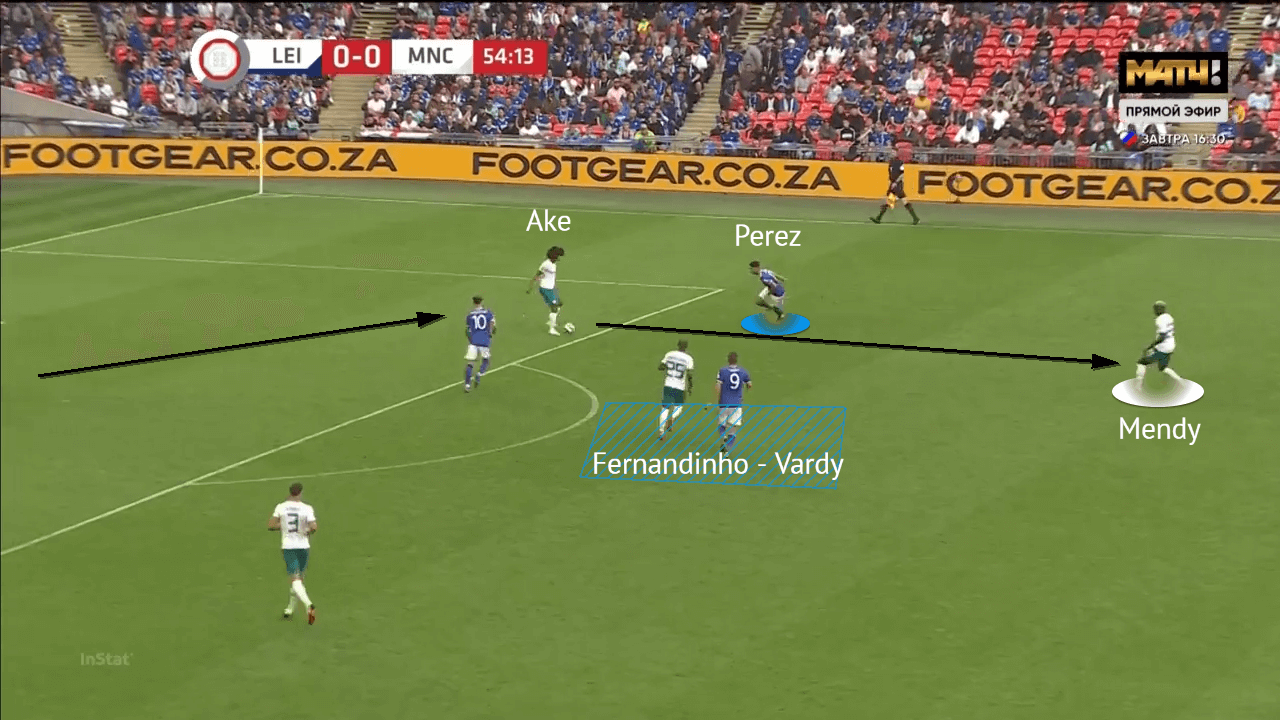 In the second half, City improved a bit by using Aké to attract pressure. In the above image, some tactical setups were the same: Vardy man-marking on Fernandinho as Maddison was out to press, Mendy was inverting in the centre.

The difference was Aké’s positioning to draw Pérez, freeing Mendy behind the first line (with Gündoğan and Palmer high to keep Leicester defensive midfielders busy). Nevertheless, Mendy closed his body too often in this game, and his limited vision before receiving hindered City to play quickly into the opposition half.

But the approach of playing deeper wingers helped City to play better in the second and third phases. When the likes of Edozie and Mahrez dropped, they could play on the stronger foot as both were wrong-footed wingers.

The above image shows the numerical advantage in this setup. Leicester still defending in  4-4-2 with wingers committed on the full-backs, when Mendy drew Pérez narrow, Pereira was in a 1v2 against Edozie and Gündoğan simultaneously. 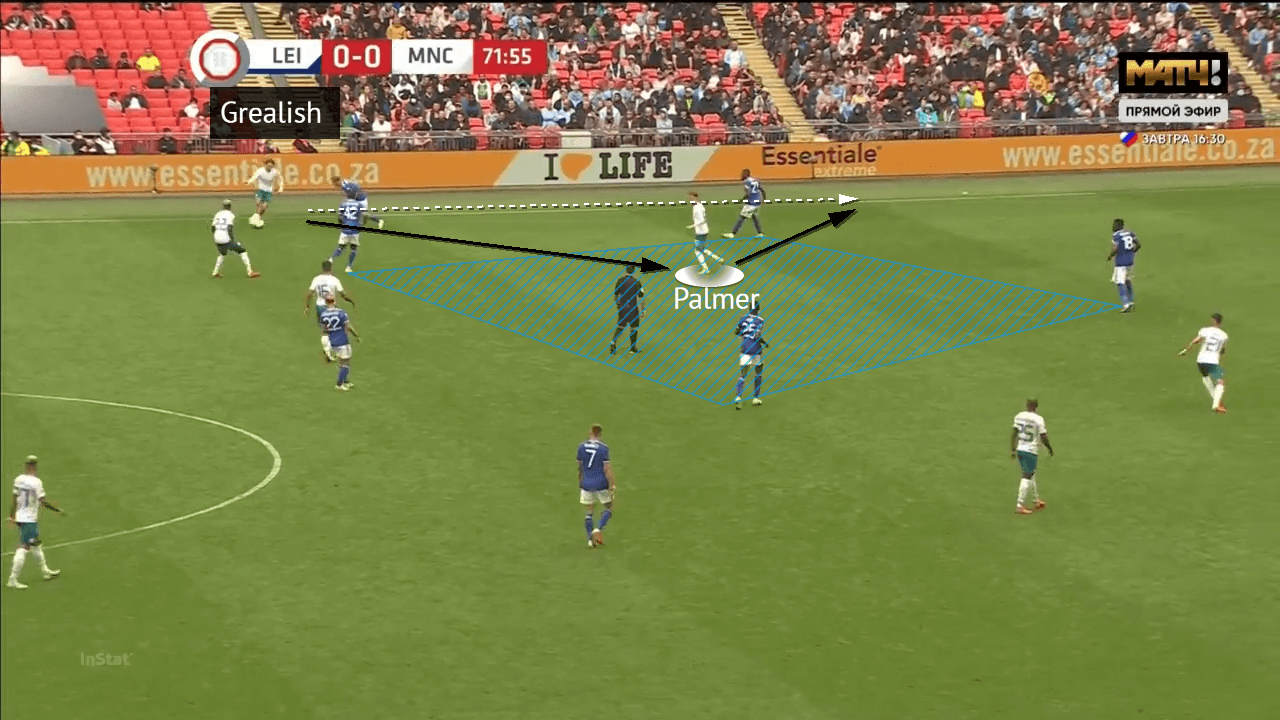 Grealish replaced Edozie with half an hour to play. The former Aston Villa captain gave the team something different. Although he was not a pacey winger liked Leroy Sané, who could burst forward on the flank, his passing ability to connect players was valuable to the team.

From his limited time of playing, we saw Grealish flexibly using his inside and outside of the boot to find teammates. Also, his good passing generated dynamics as now City could also go into the centre. With Palmer pushing higher in the left half-spaces, Grealish played a one-two and quickly bypassed Pereira in this situation.

Since City’s pressing tactics are complicated and it takes time to grasp the principles, Grealish was likely to start on the left flank in the early days at City.

Although the result was disappointing as City lost the game in the closing period of the clash, Pep should not be worrying too much as they will get better. There were some imperfect executions of the game plan, but certainly there were positives to take as well. As we have mentioned, Grealish looked quite fresh and demonstrated his passing ability in his limited game time. As English national team players are returning late, City will be relying on the used players at Wembley at the beginning of the season.

Congratulations to Rodgers and Leicester. Their performance was good enough to claim the trophy, despite dipping a bit in the second half. Apart from the regular first-team members who started, the new signings Patson Daka and Boubakary Soumaré also looked promising. Of course, we will be expecting Leicester to be involved in the top-six race again this season.