Sunderland and Doncaster are both in the hunt for promotion from EFL League One. Sunderland started the day in sixth place, with Doncaster only four points adrift. Having won four in the last five, Sunderland were favourites for the win, however, they were up against a strong defence who have only conceded 24 goals this season.

This tactical analysis will assess the complex midfield battle and understand the tactics employed by both sides as they sought to find the first goal. Sunderland had earlier won the reverse fixture in December by a single goal in what was a fierce contest in the centre of the park. 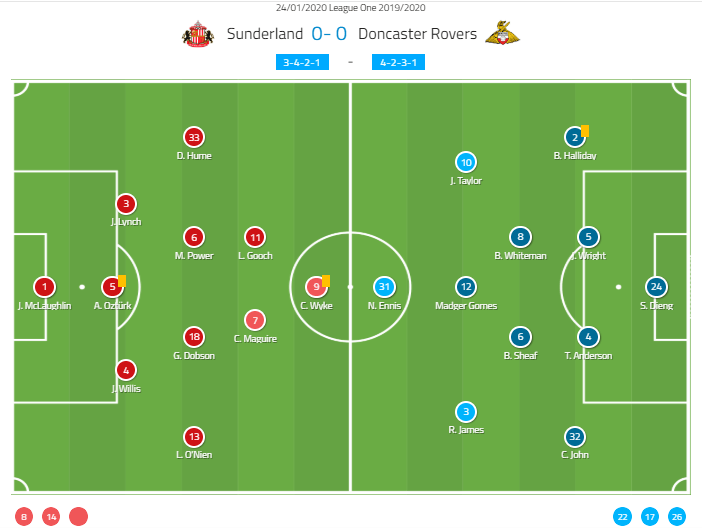 Sunderland were set up in their familiar 3-4-3 formation with Lynden Gooch still occupying the left flank following growing speculation of Aiden McGeady’s transfer away from Tyneside. Gooch has been in good form, scoring three in the last five fixtures. Following his arrival on a six-month contract, Kyle Lafferty had to settle for a space on the bench with Wyke being preferred.

Keiran Sadlier was rested following a knock in his last outing and Niall Ennis was the replacement into the attack in Doncaster’s 4-2-3-1 formation. Coppinger was rested with Gomes preferred in the number 10 role.

Darren Moore set up Doncaster with five players in the midfield. Compared with the four in the midfield for Sunderland, they were able to control the play better. Although this didn’t manifest as key chances or possession, they had the lion’s share of the play in the centre of the park. Moore’s offensive tactics were focused on overloading the midfield to create the breakthrough. 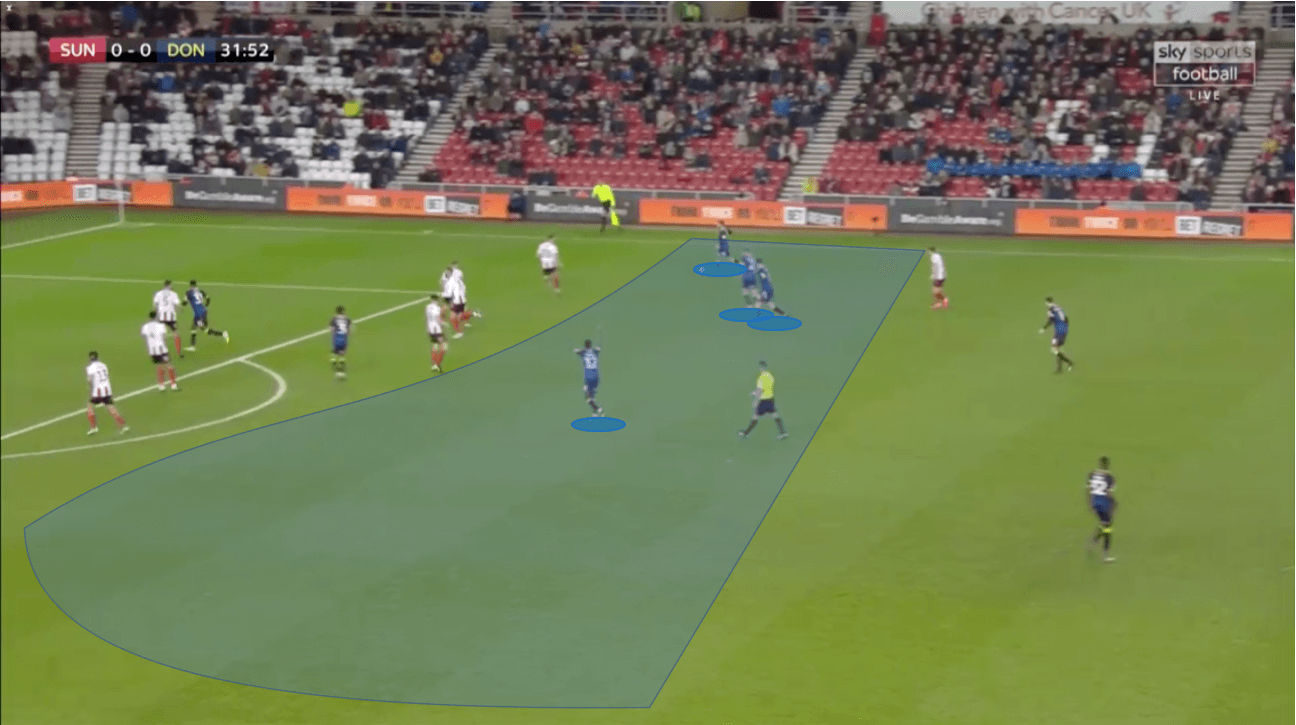 Whilst on the offence, Sunderland dropped deep with the midfield four failing to hold the space in front of the back four and they were now occupying deep positions which allowed Doncaster to dominate the midfield with numbers. As shown, Doncaster have space to move the ball as they approach the final third. Gomes is occupying the central area and has the space to create a chance. Sunderland ought to have applied more structural discipline with Dobson and Power in the central areas providing harassment on the ball to slow the play. 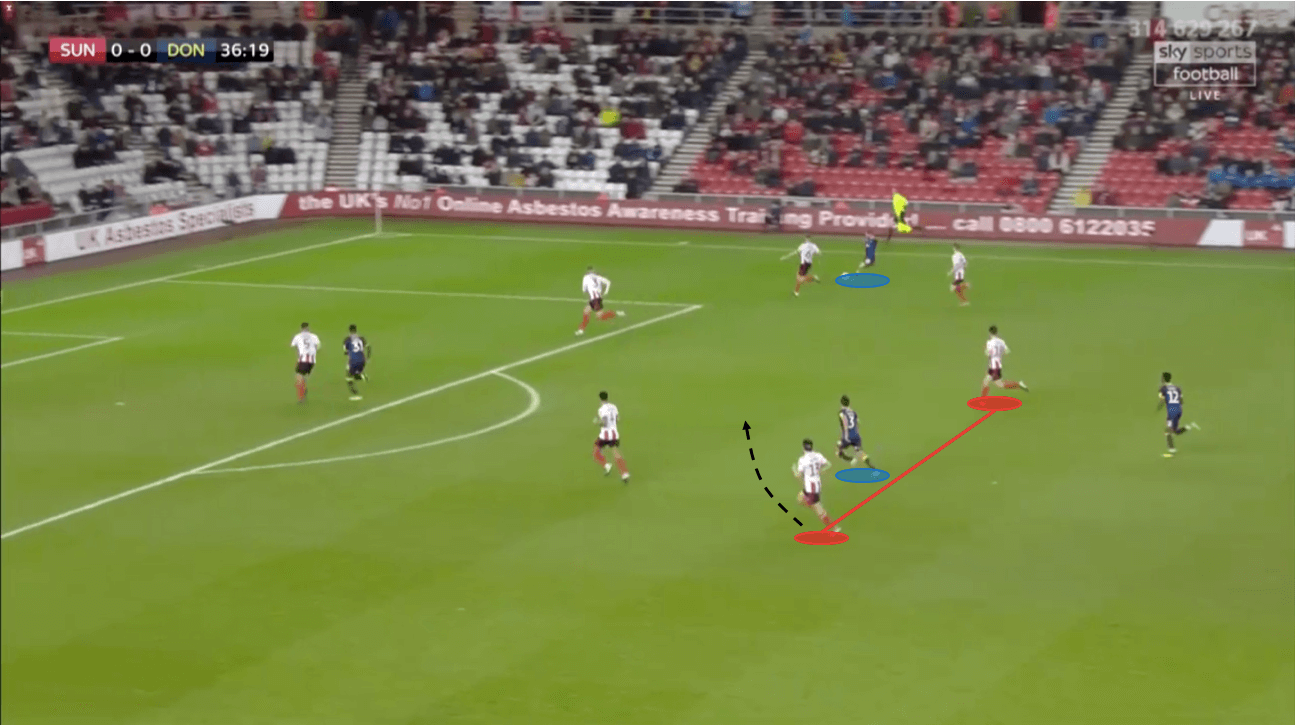 As the first half came to a close, Sunderland amended their tactics to better cover the central midfield areas. As shown, Doncaster used the right flank for the counter-attack but were unable to access the central areas as easily – this was because the midfield tracked in front of the defensive line and covered the passing channels into the central areas. O’Nien is tracking across the path of James, forcing the winger to cross the ball into an area with a low expectation of a goal. More patient build-up play or greater support in the wide areas could have provided Doncaster with a more dangerous delivery into the box.

Against a front three, Doncaster were disciplined in the first half and maintained an offensive flair whilst cutting out the key linkages between the opposition midfield and their front line. The result was relatively few key moments for Sunderland with the best of those coming from set-pieces. It was clear that they have worked hard on corner routines with two notable examples. 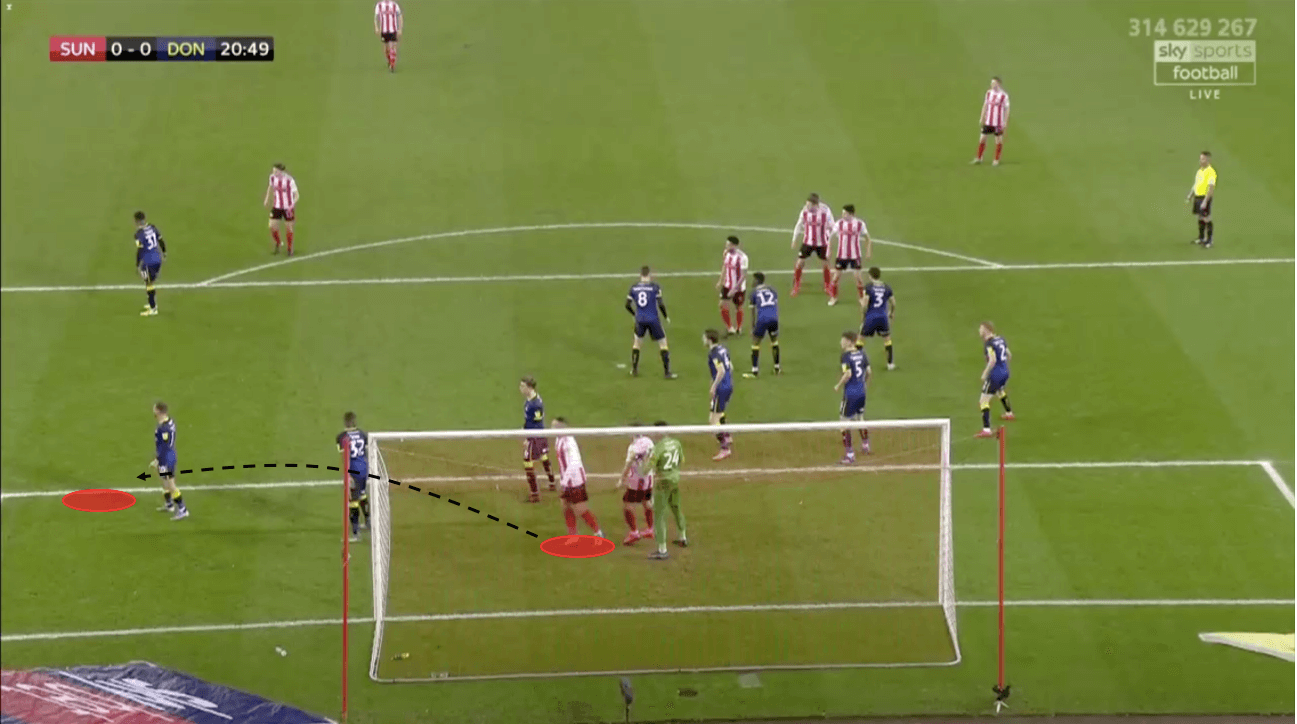 As the above example shows, Sunderland used two players on the goalkeeper as deception hinting at a ball into a central area. Joel Lynch moves quickly into a position at the near post which is out of sight of the two defenders in that area. He beats Taylor to the ball but makes the decision to glance the ball towards the near post. Taylor’s position means that Lynch has an acute angle and a poor expectation of beating the keeper. There was poor decision-making in this area was a theme throughout the game, as Lynch flicking the ball into a more central area could have been a better decision. 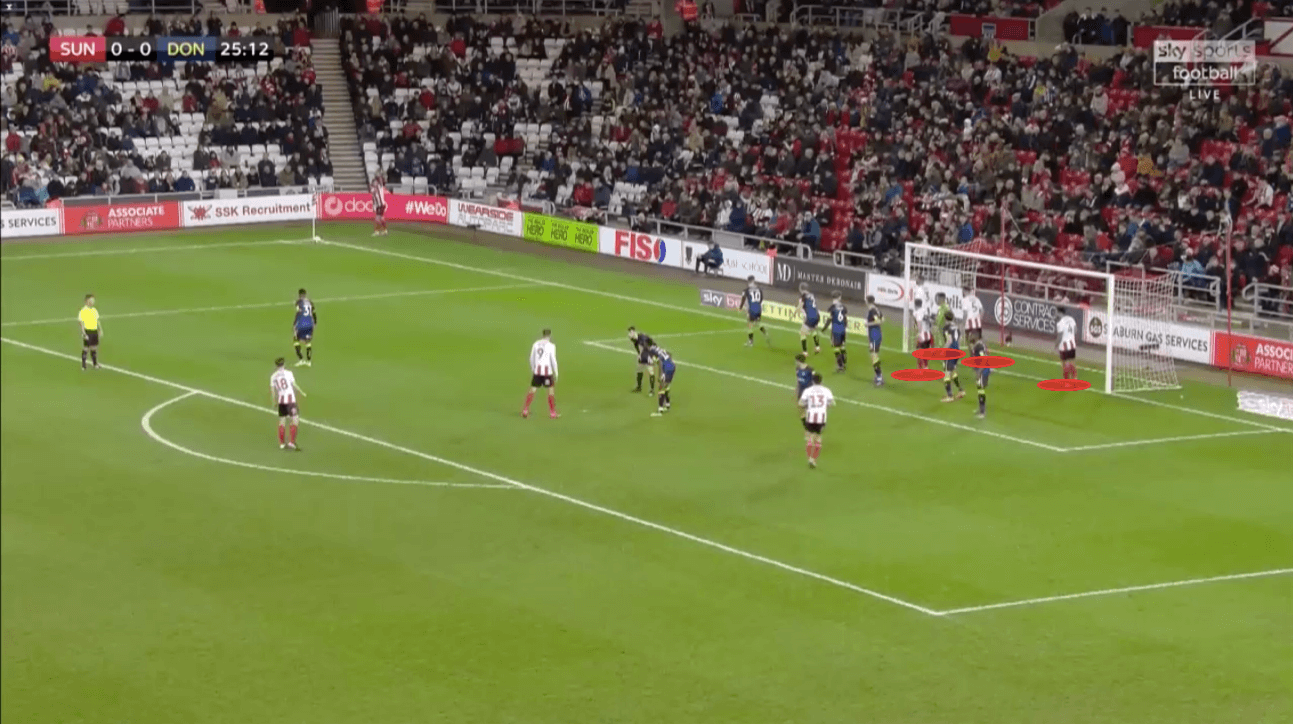 In another variation, Lynch picked up a similar position but is joined by three other players on the line. As the ball comes in, all four moved in front of the goalkeeper to block his movement towards the ball. Lynch is then favourite for the ball and looks to steer it towards goal. With four Doncaster players in a similar area, the congestion further limits the goalkeeper’s movement. Sunderland were unable to make either corner pay dividends but it showed the creative tactics that they employed in this fixture. Lynch was the key man in this area and provided the most dangerous efforts towards goal.

Doncaster found space between the lines

Sunderland aimed to play out from the back with varying degrees of success. With some pressure from the Doncaster forward line, the ball would then go direct, and this variation in tactics meant that Sunderland needed to be less vertically compact. Although presenting another option on the offence, it requires space to be closed in the transition to defence. The result was that Sunderland left space between the lines that Doncaster aimed to exploit. 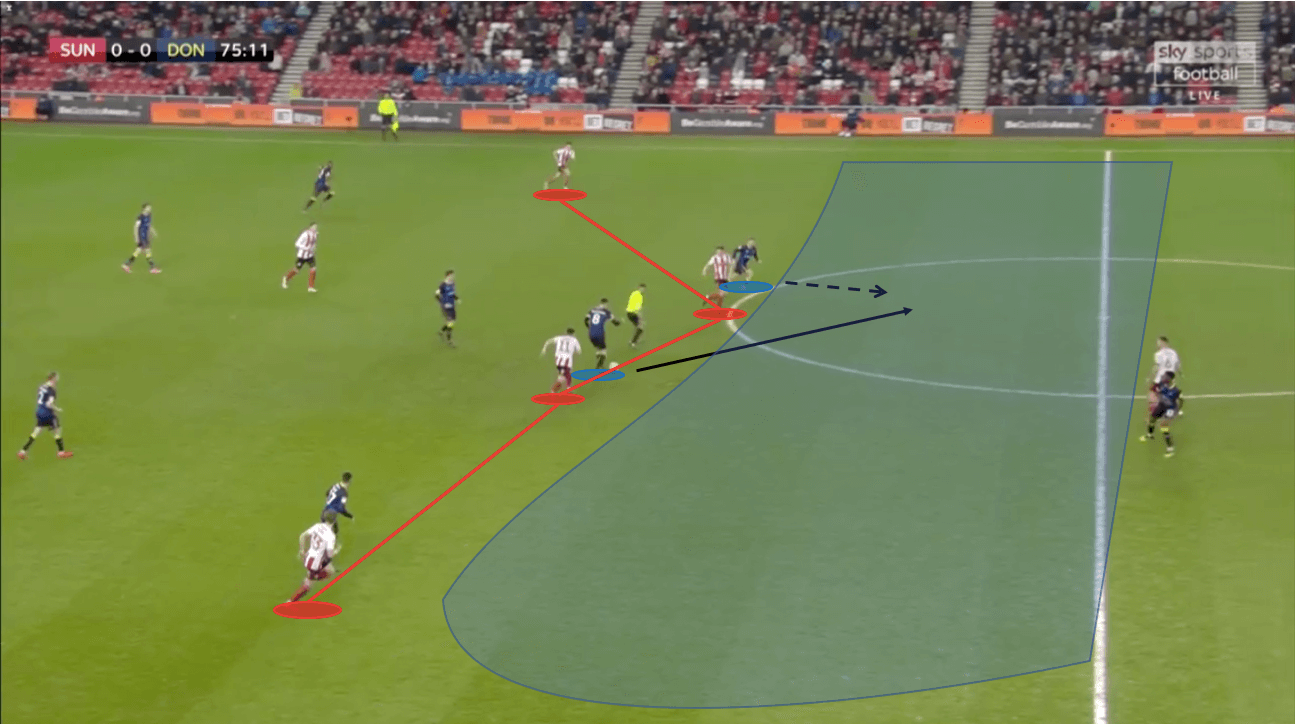 As shown above, Doncaster were able to exploit the space between the midfield and the defence. A well-timed pass into space pushed Doncaster into the opposition half having outmanoeuvred the midfield line. The compactness of the Sunderland allowed space for Doncaster to exploit with a quick running attack in a central area. The attack turns into a three versus three situation which Doncaster aren’t able to capitalise on. Doncaster didn’t exploit this space enough and could have done more to commit midfielders during the transition from defence to attack

Doncaster forced into a deep block

Sunderland’s dominance in the second half was created by better linkages between the forward line and the midfield. Against Doncaster’s back four, Sunderland were able to commit greater numbers to the offence, so Moore’s tactics switched from a midfield overload to more counter-attacking football. Sunderland were subsequently able to create more chances and looked the better team in the second half. 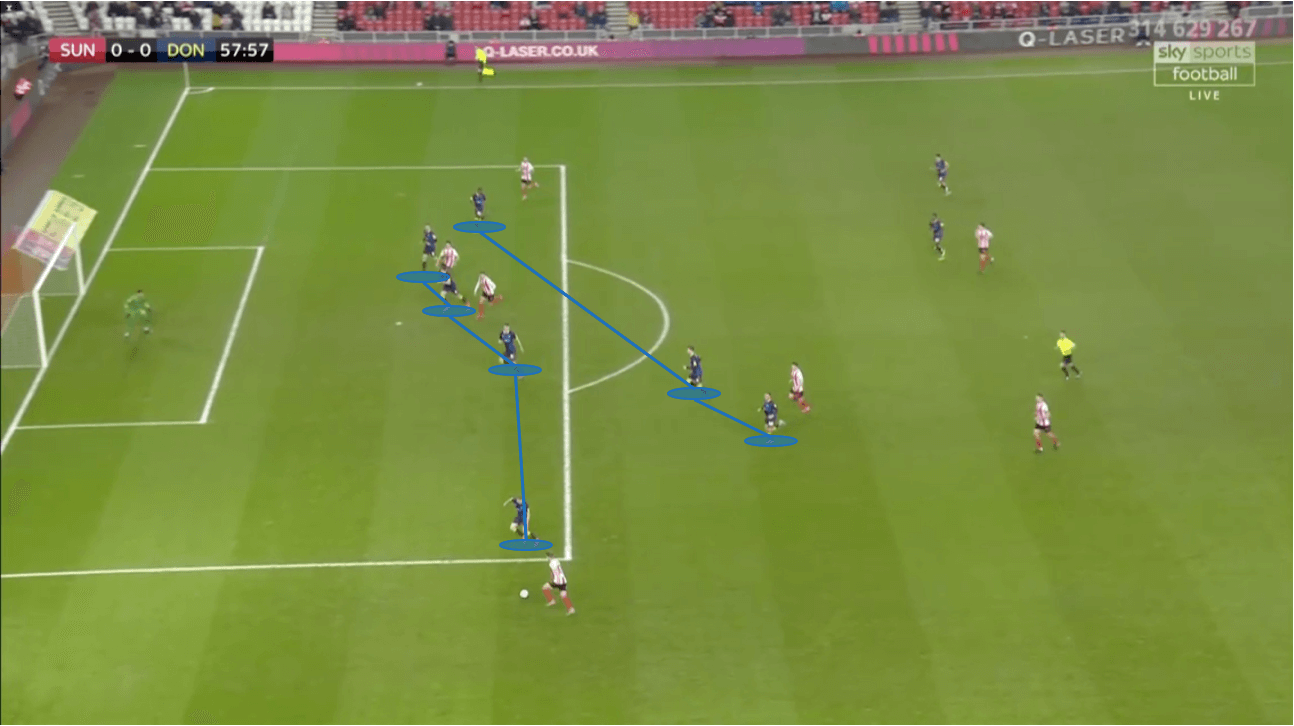 In the example above, Doncaster transitioned from attack to defence quickly and played with significantly more compactness than Sunderland. As the ball is played into a wide area, Doncaster close the passing channels and occupy the dangerous zones in the central areas. Sunderland weren’t able to capitalise in this example but the defensive tactics from Doncaster allowed Sunderland the territory in the second half.

From the deep block, Doncaster struggled to transition from defence to offence which limited the chances they could create. As Doncaster were deeper, Sunderland were better able to play out from the back and were not reliant on the direct balls that were more commonly used in the early periods of the match.

Far from a thriller for the neutral, this tactical analysis concludes that Sunderland were the better team on balance, but didn’t create enough to find the breakthrough. Doncaster’s tactics ebbed and flowed throughout with a transition to counter-attacking football in the second half. This is the first time that Sunderland’s 3-4-3 has been tactically outmanoeuvred this season, which has highlighted the importance of linkages between the forward line and the midfield.

Doncaster’s tactics should have paid dividends in the first half with their dominance in the midfield but they weren’t able to capitalise. If Doncaster are to succeed in promotion to the EFL Championship, they need to find more quality in the final third.