Valencia and Barcelona faced each other in the Mestalla this weekend. For the recently appointed Quique Setién, it was his second game as coach for Barcelona. This alone set high expectations for this game and will be focussed in our tactical analysis. Barcelona’s aim of maintaining the lead in La Liga didn’t convert into a win though, as Valencia showed a great defensive effort and discipline. In our analysis, we will also explain Valencia’s tactics and show how Albert Celades prepared for the game.

Both teams played as expected. Barcelona lined up in a 4-3-3 formation, while the host used the preferred 4-4-2. At Barcelona, Frenkie de Jong and Arthur started instead of Artuto Vidal and Ivan Rakitić, which was also expected. The consequences of these changes will be explained further on.

Like in Setién’s first game with Barcelona last week against Granada, Barcelona’s possession game was structured and well organized. The initial 4-3-3 formation would rapidly change into a 3-3-4 structure when Barca had the ball, with Jordi Alba pushing high. 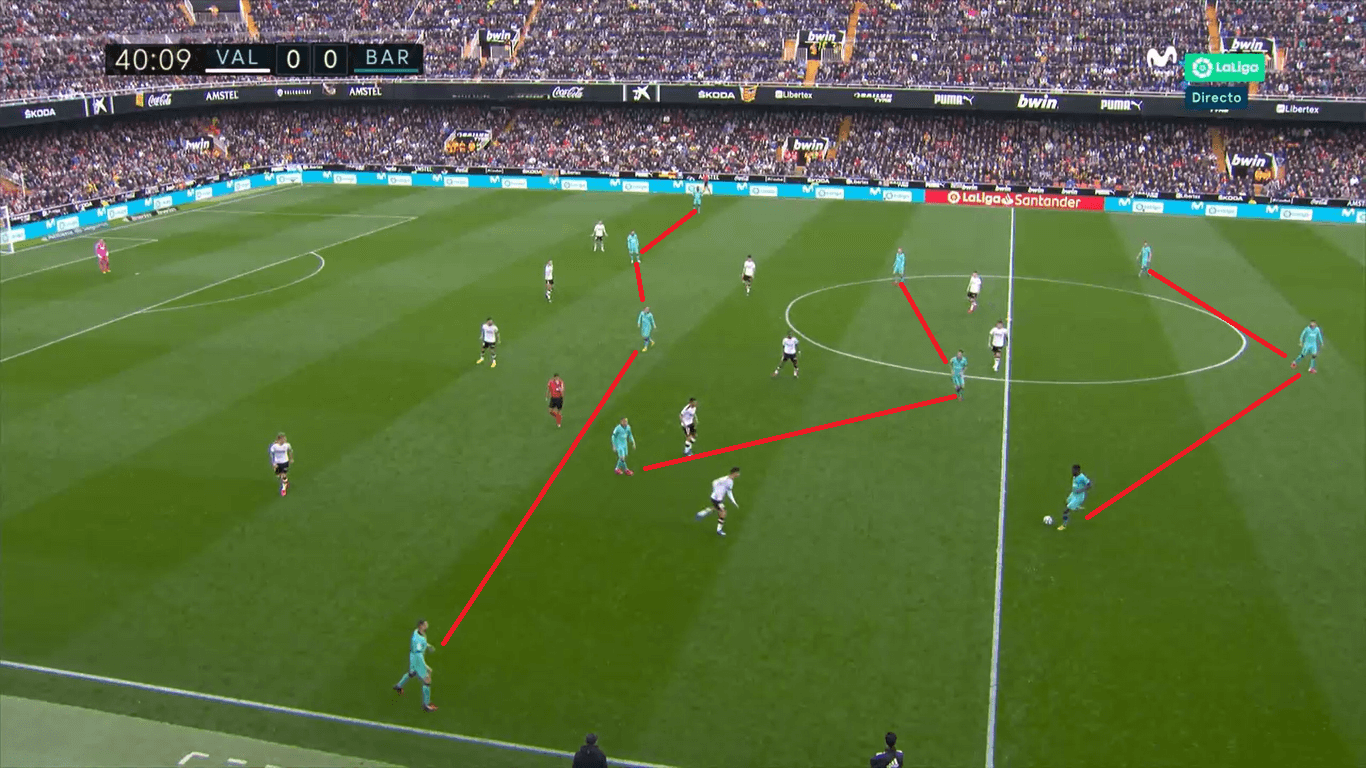 This structure could be seen almost every time Barcelona were in possession. Building up with a back three is something Setién also used successfully at Betis Sevilla last season. With Samuel Umtiti, Gerard Piqué and Sergi Roberto, he has three technically strong players which ensures a stable build-up game. They mostly tried to advance the ball by passing it to Sergio Busquets. Longer passes breaking the lines were rather rare.

Valencia defended in a 4-4-2 with a focus on cutting off Barca’s midfield. 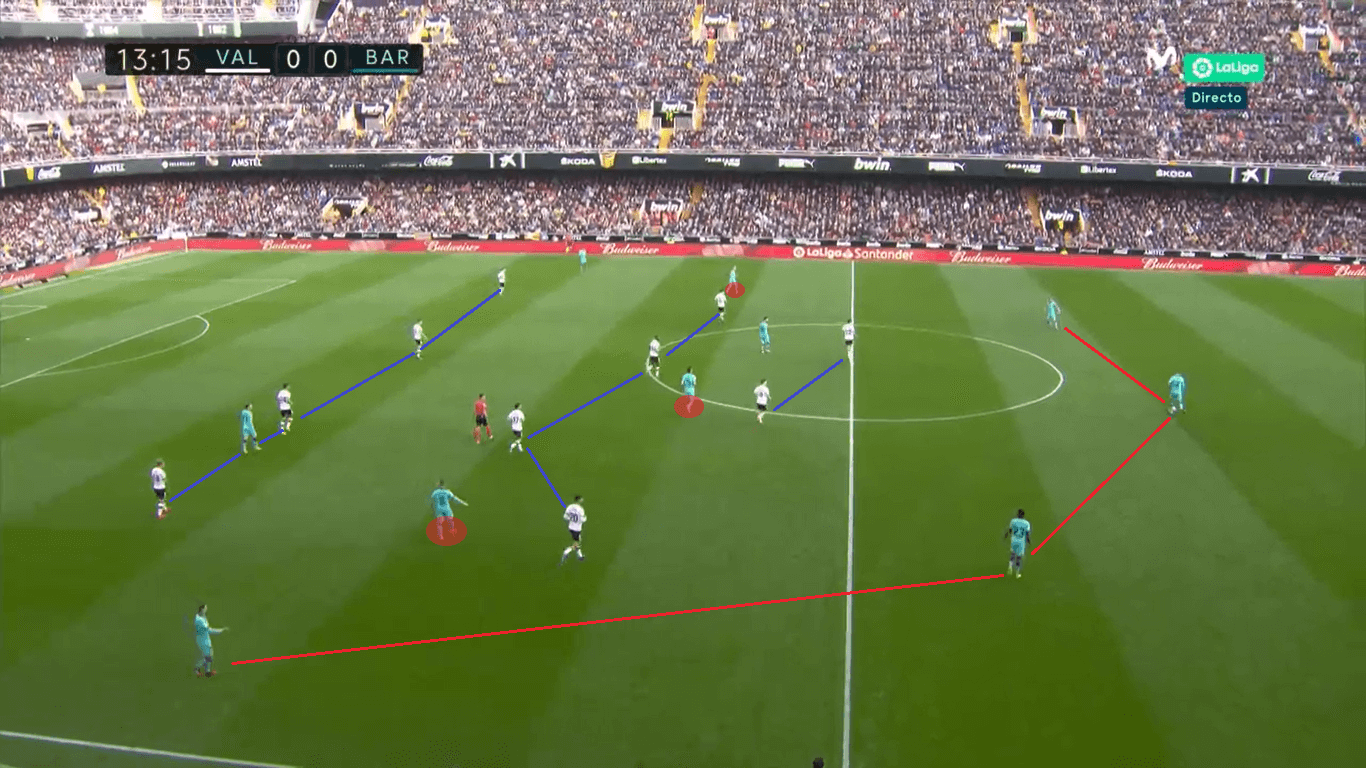 Again, watch Barcelona’s positioning. Here, Lionel Messi also drops into the midfield near Busquets to try being more active. Occasionally, this led to situations where the centre was too crowded, like in the following image. 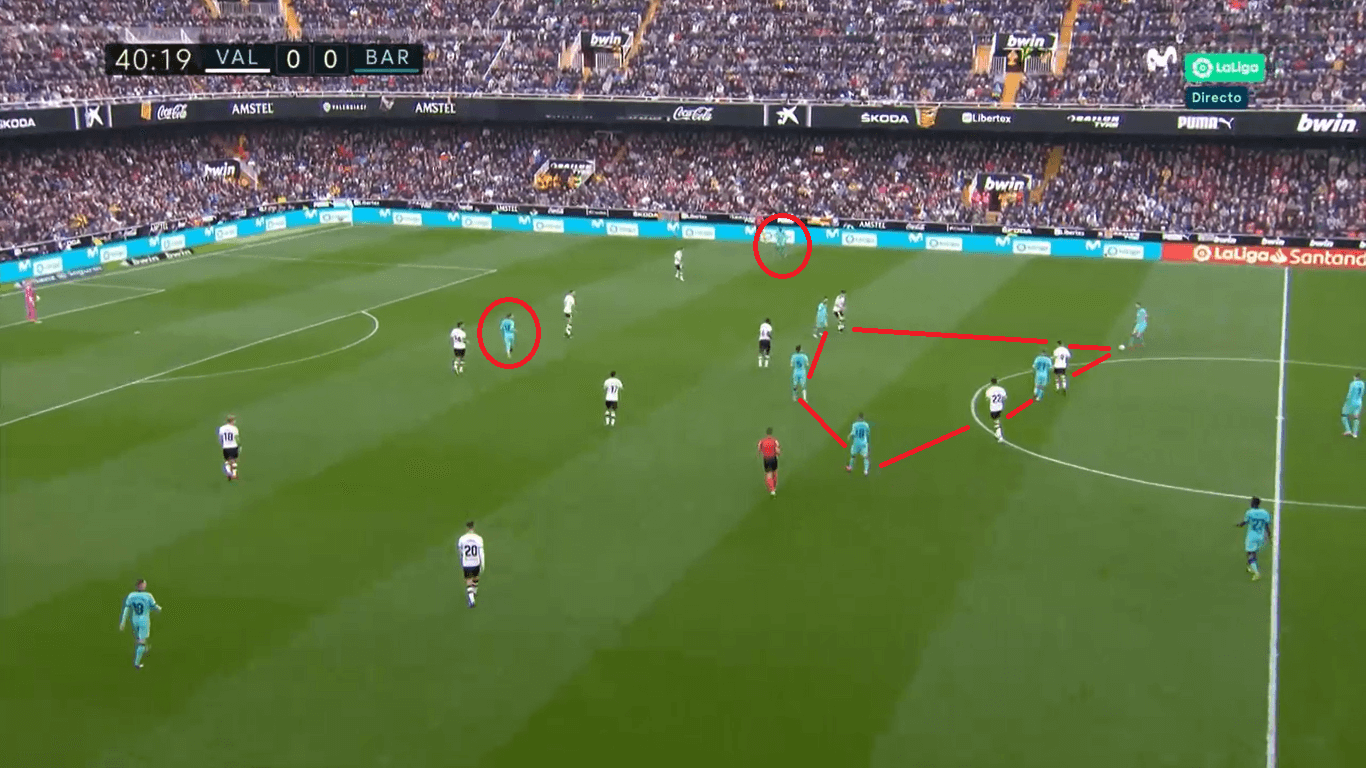 Still, Barcelona’s positioning is good, even if it is not optimal. Antoine Griezmann up-front pins the two centre-backs, while Ansu Fati and Jordi Alba provide width. With five players within a small space, it becomes difficult to break through though. Valencia also shifted their attention towards defending the centre as a consequence.

Breaking through in the centre was difficult for Barcelona

One great example of how Valencia managed to keep the centre tight can be seen in the image below. 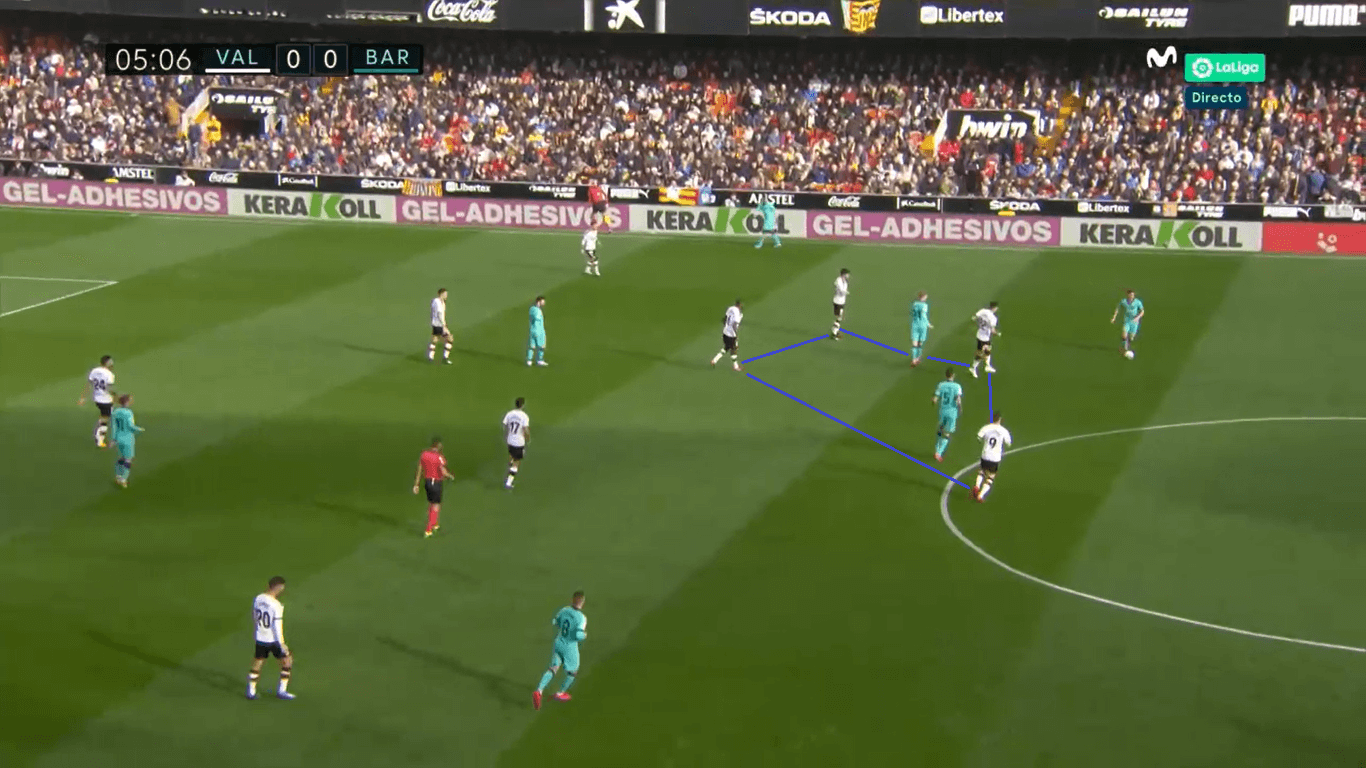 While the midfield line hold the line, the two forwards also drop back to mark Busquets and de Jong. Thus, it becomes impossible for Barcelona to play into there, so the Blaugrana have to shift the ball over to the other wing to seek for chances there.

These changes of attacking areas were often not executed quickly enough though. Valencia thus had time to recover and shifted heavily to the ballnear side. 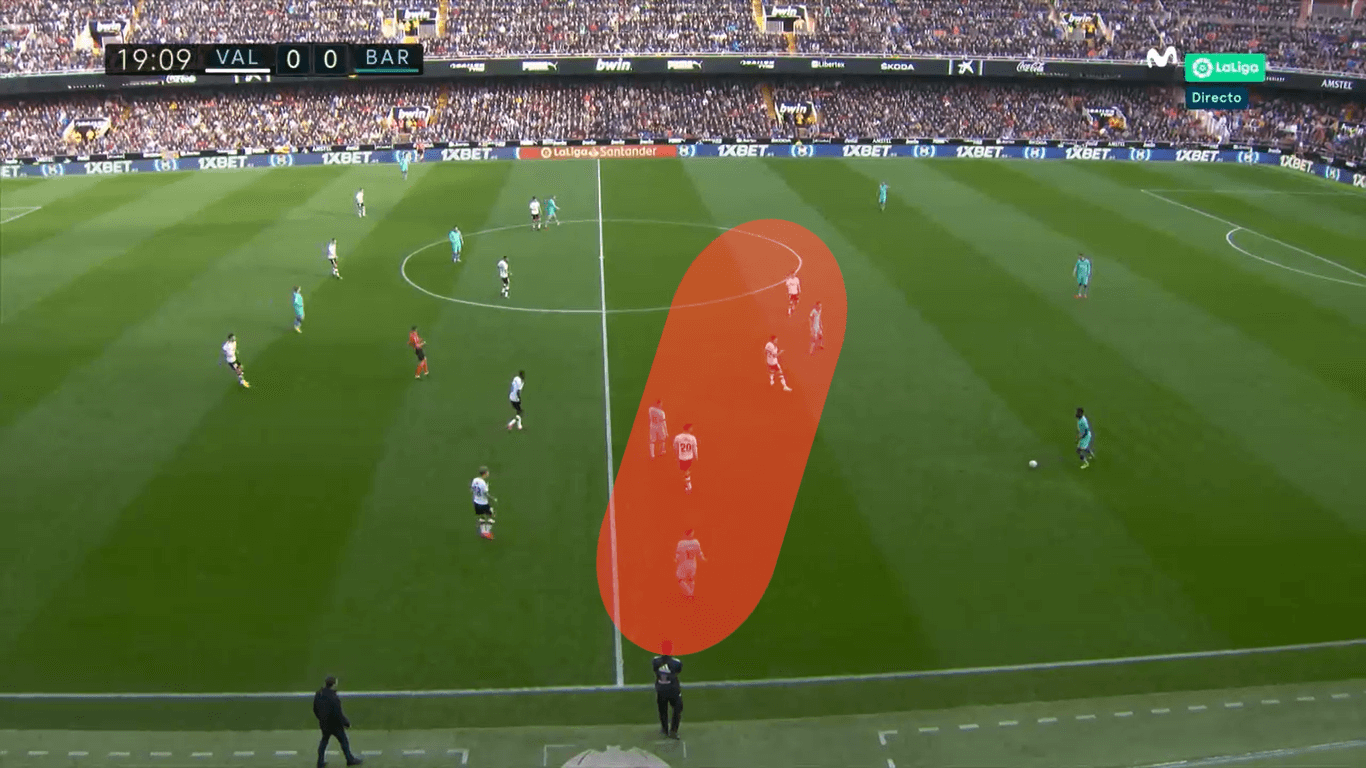 Most of the time, they were able to create some kind of “wall”, preventing Barcelona from infiltrating.

Another great example of Valencia’s fantastic defensive preparation is the following one: 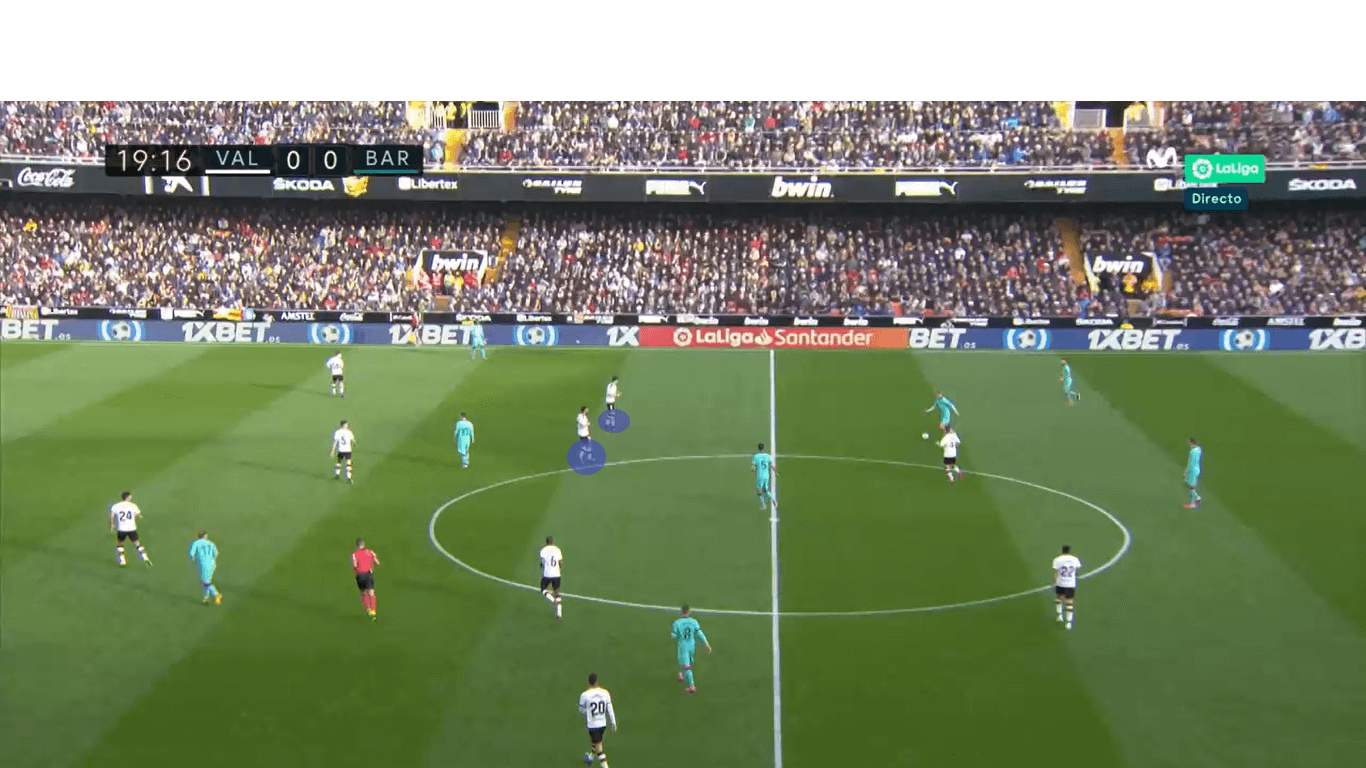 Here, Frenkie de Jong drops back to provoke Valencia’s midfield to follow him and open space behind them. Normally, building up with a back three doesn’t require an additional midfielder to drop that much back, but Setién also used this tactic against Granada to clear space for Messi. Valencia didn’t fall for this though.

On a tactical board, the image from above would look as follows: 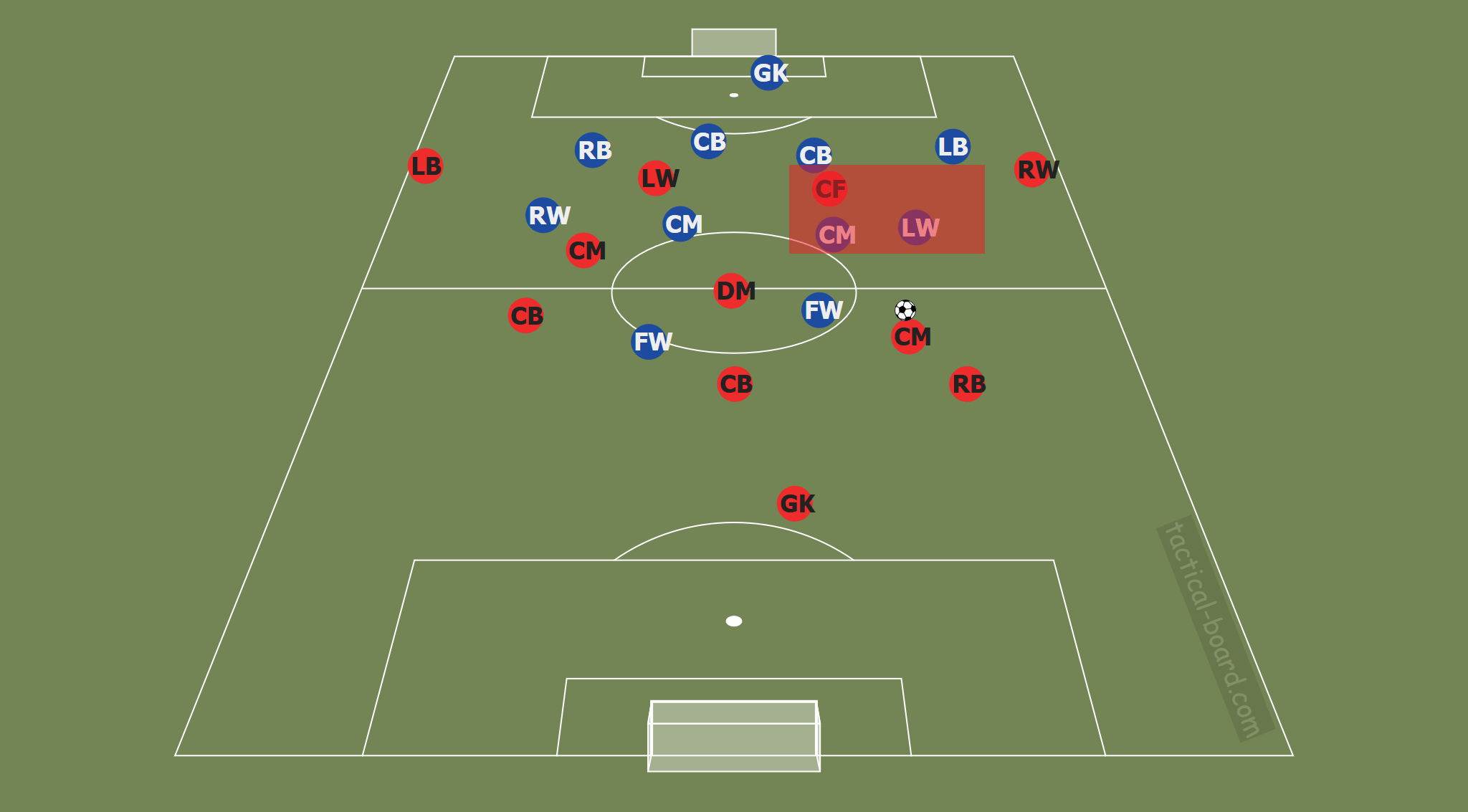 If Valencia decided to attack de Jong, the Dutchman would then involve Busquets into play, who then would play a quick one-touch-pass to Messi. 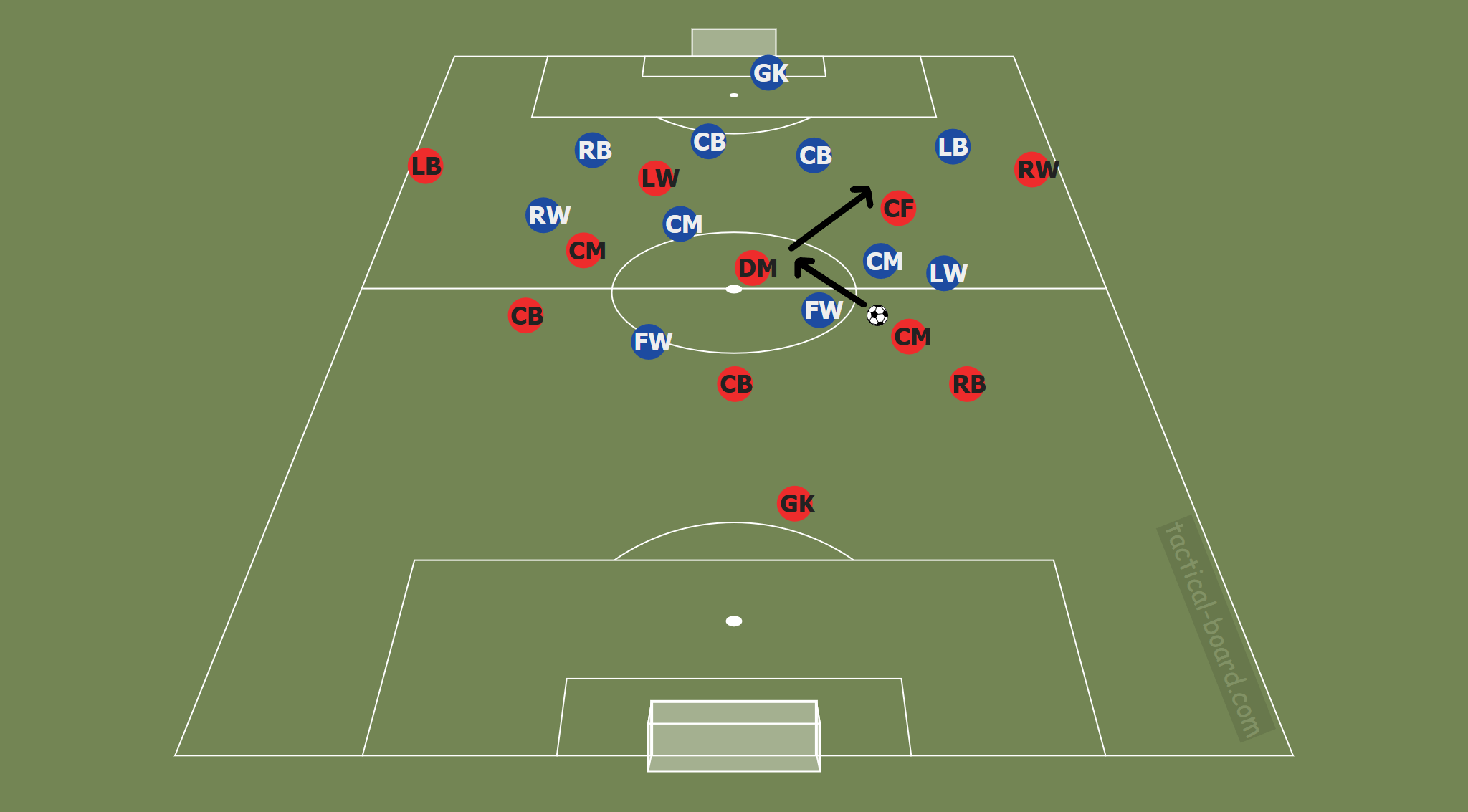 Messi then is already positioned with his face towards the target. He would have a fantastic sight and could immediately see all options to continue the attack in the final third. With his explosive acceleration, he would dribble towards the defence in a huge tempo, which is incredibly dangerous for every defence in the world. While this tactic worked well against Granada, as stated above, Valencia came prepared and didn’t fall for it.

Somewhat unsurprisingly, Setién had some other ideas as well. While breaking through in the centre didn’t work, Barcelona also tried their luck with penetrations and one-on-one positions for Fati on the right wing.

As both Messi and Griezmann aren’t “real” strikers, it is as if Barcelona would play a double-false9-system. This won’t change with Luis Suárez being out for the rest of the season. However, this often results in empty spaces in the dangerous areas near the target. Ansu Fati tried to penetrate into these spaces from time to time, but the youngster wasn’t trusted all that much. 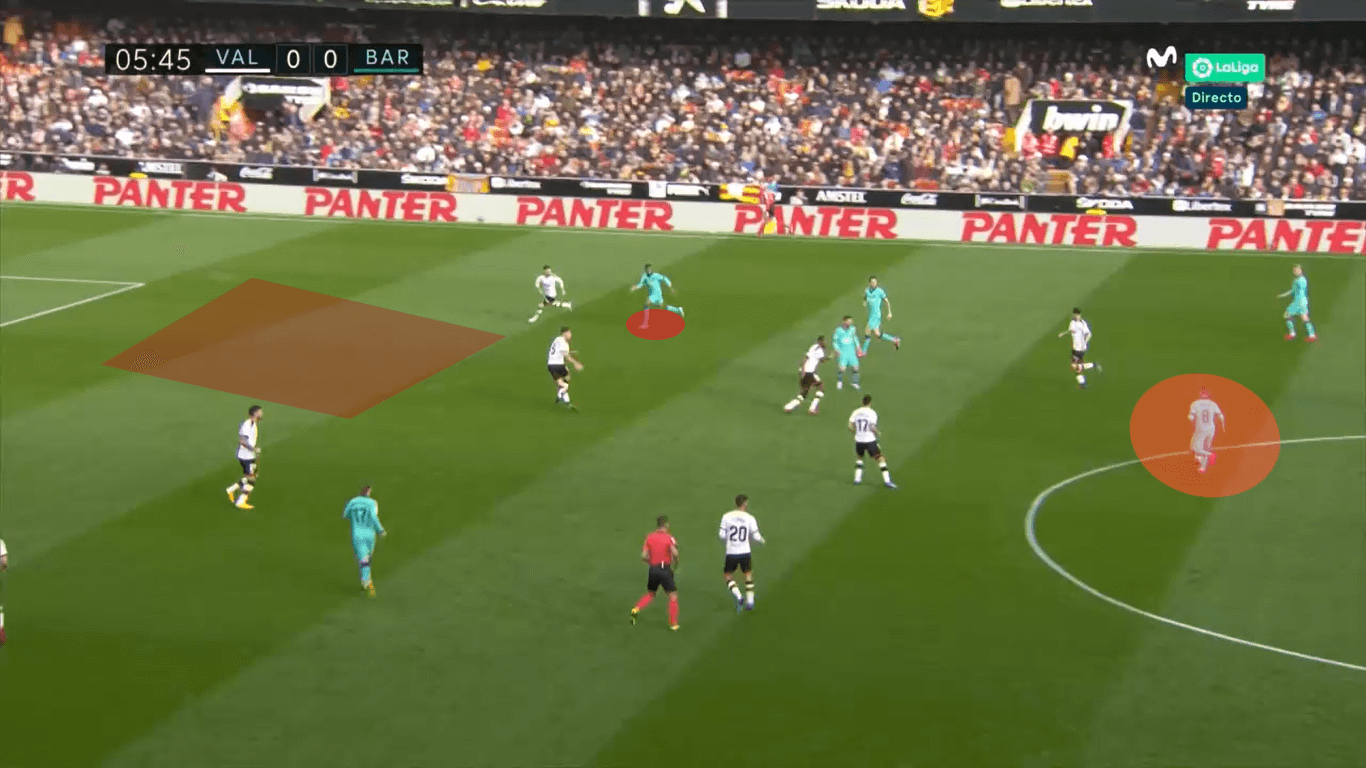 Here, Arthur has the ball. The Brazilian midfielder had a pass success rate of 100% in this game. If he doesn’t play the risky ball into the space behind the back line to Fati, how much are such stats really worth though? With no pressure being on him, it seems natural that a chip to Fati should have occurred.

With Alba on the left wing not doing such runs, Barca also needed penetration from their midfielders. Without such, it was almost impossible to break Valencia’s defence. One example where this was successful can be seen here: 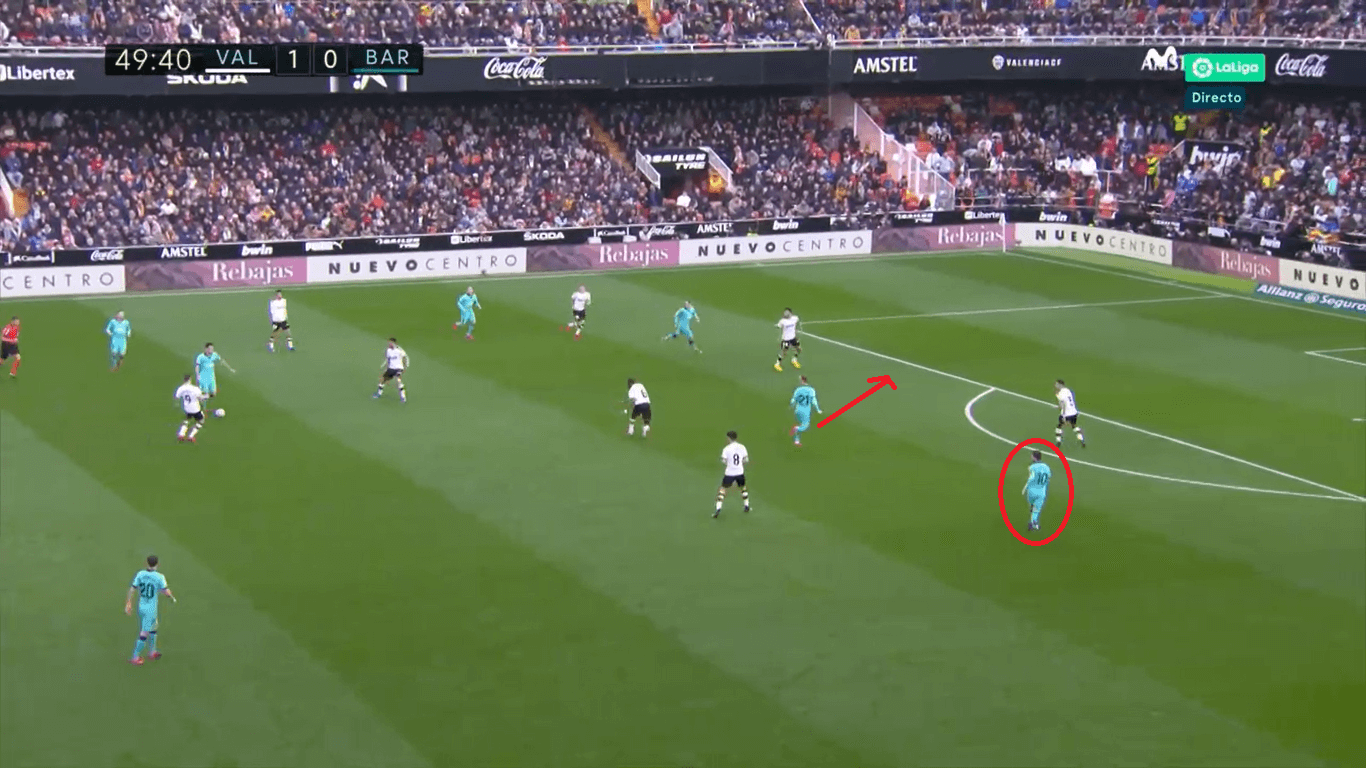 De Jong makes a great run, forcing the centre-back to follow him. This opens up space for Messi. Valencia’s midfield line stands solid still, but Geoffrey Kondogbia has to close the vertical passing lane to de Jong, which opens up the passing lane to Messi. The pass from Busquets to Messi requires chirurgic precision, which underlines why such situations didn’t occur more often. In the end, Messi’s attempt isn’t successful either.

Later on, Setién decided to substitute Arturo Vidal in for Arthur. The Chilean with his much more vertical style of play brings in a component into the team that was missing in his absence. 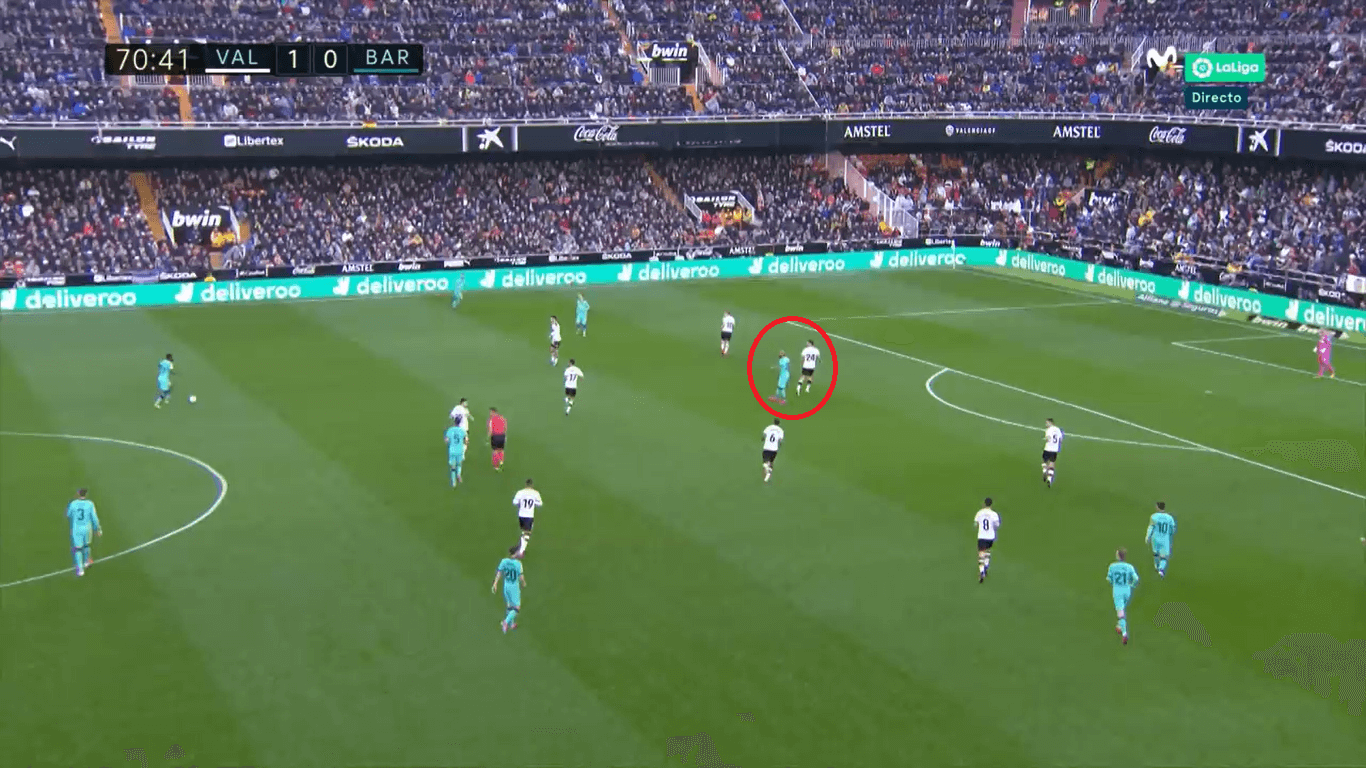 However, looking at this image with Vidal almost playing like a centre-forward, the question pops up whether Barcelona need a “real” striker or not. A physically strong striker would definitely bring in a new component and pose new threats to the opponents. Without this kind of threat, Valencia didn’t have a problem to defend.

When Fati received the ball out on the wing, there was never a danger of a cross into the box. 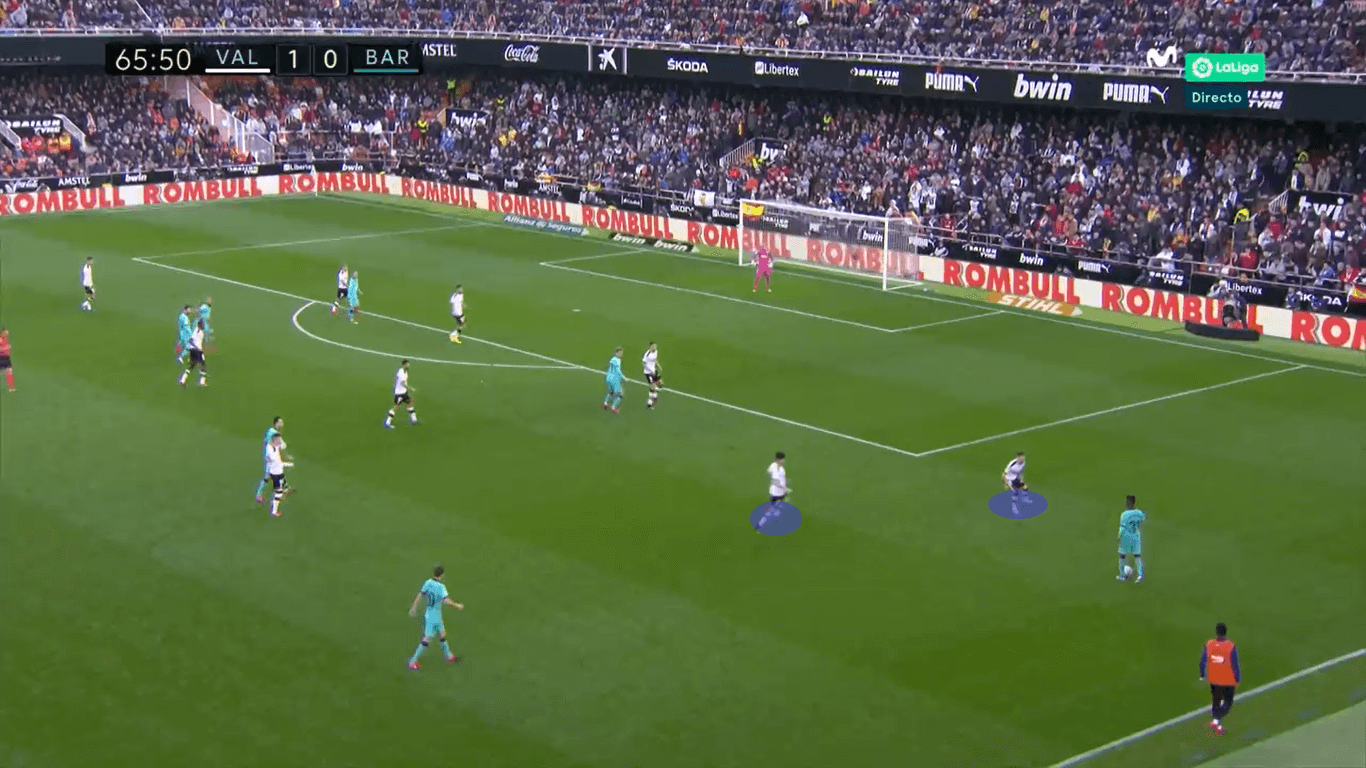 Thus, Valencia simply brought a second defender and opposed Fati a few meters back to prevent him from invading the box. This simple tactic ensured that nothing dangerous would happen for Valencia.

Even when Barcelona tried to surprise Valencia overloading the left wing, it was no problem for Valencia to prevent the ball from reaching that area. 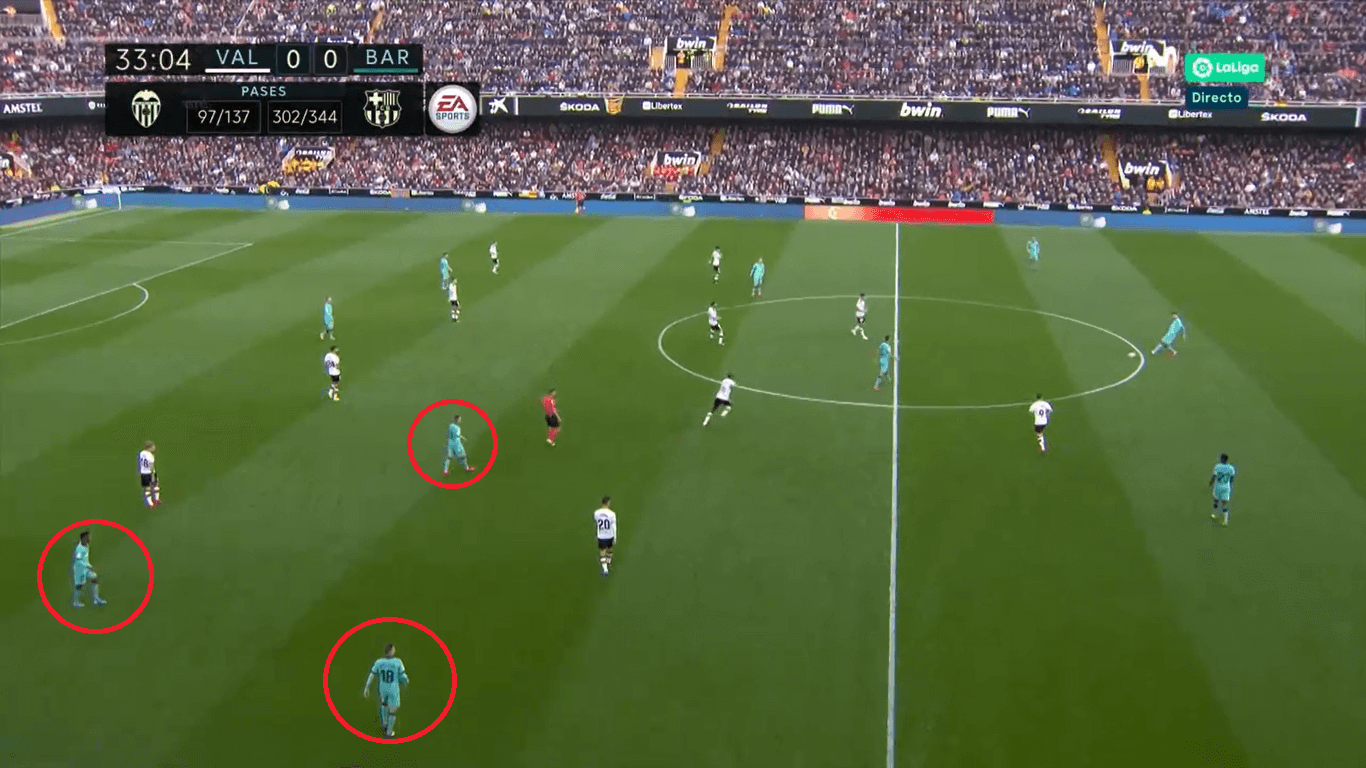 Kondogbia aggressive sprint put so much pressure on Busquets that nothing dangerous happened.

As Barcelona build-up with a back three, it made perfectly sense for Valencia to use the vacated spaces on the wing when counterattacking. 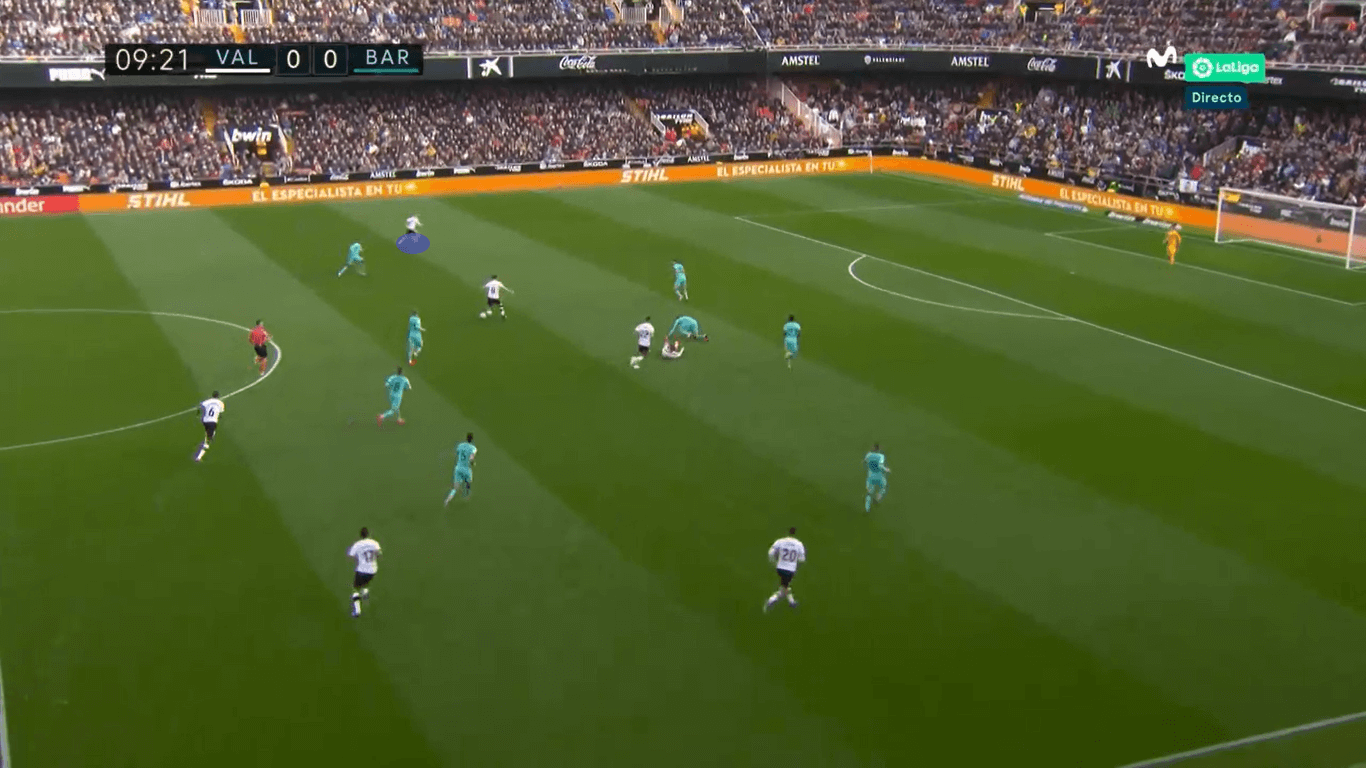 Here, we see that the three building-up are still building the last line at Barcelona, Piqué laying on the floor. Thus, Sergi Roberto who should be right back in defence is still in the centre, which opens space on the left wing. This scene results in a penalty for Valencia, which Goalkeeper Marc-André ter Stegen was able to save.

Valencia’s second goal was also scored from a similar situation. The attack started on the right attacking wing and ended with an easy horizontal pass where Sergi Roberto again had no chance to prevent the pass earlier on. 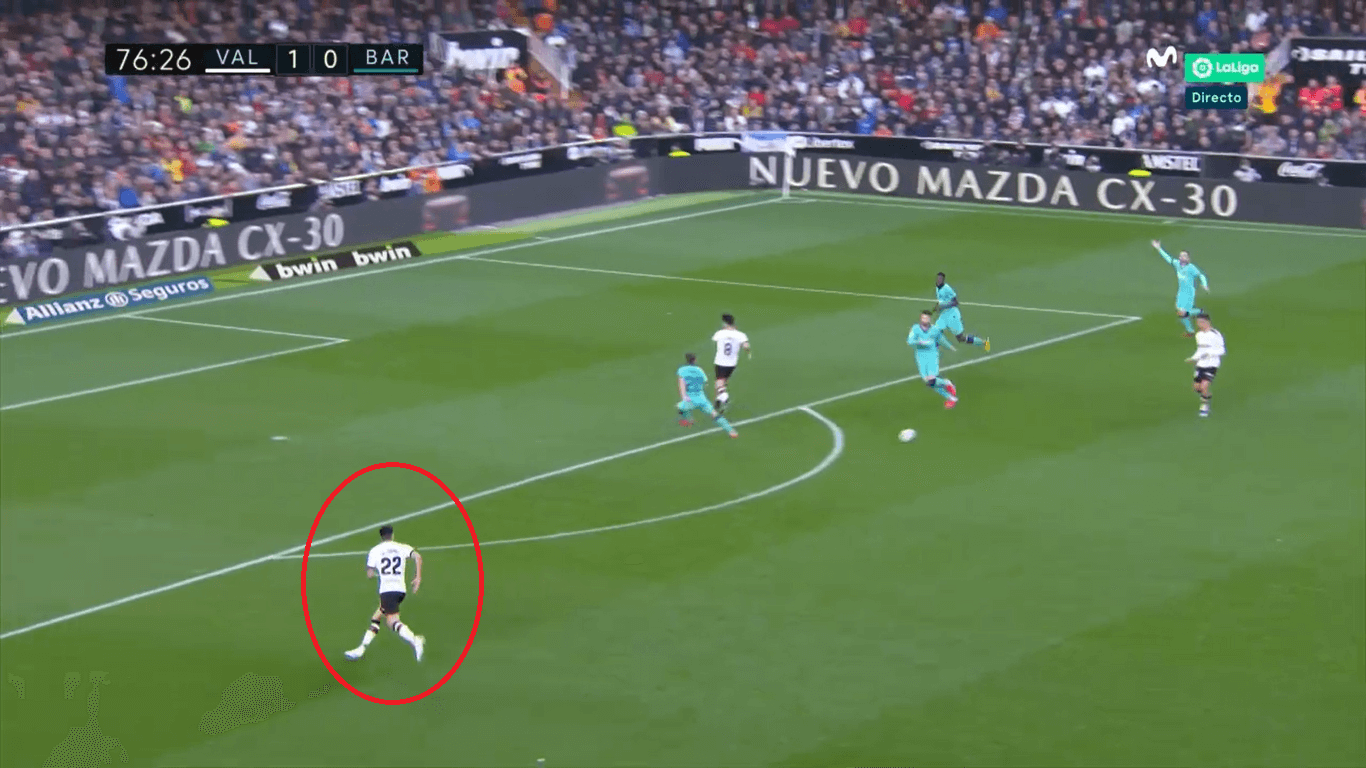 Valencia’s 4-4-2 always ensured that the two forwards could pin the back three, while two wingers attacked the wide areas. One of the best examples of this can be seen here: 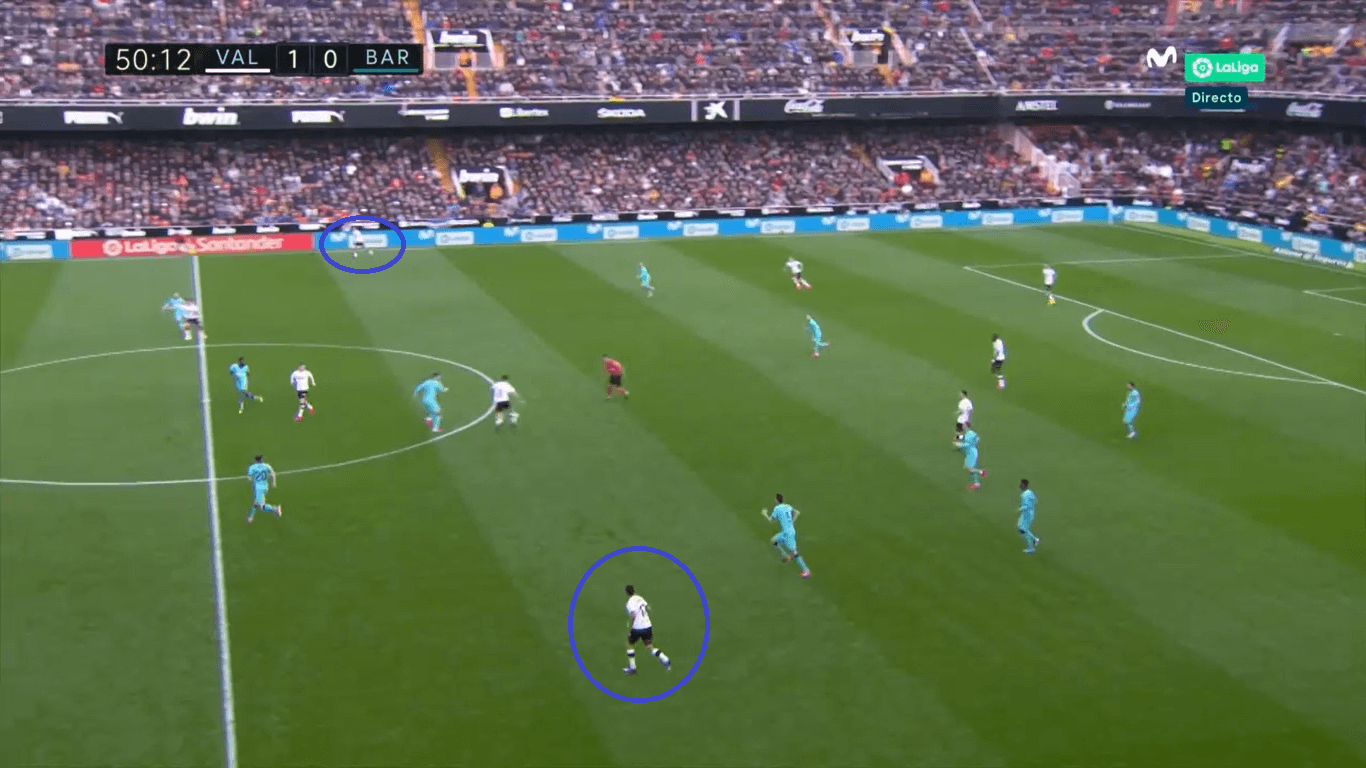 Valencia have the ball near the halfway circle. Barcelona’s back three have to stay in the centre to mark the two forwards. Both wingers are open and Valencia are able to create a dangerous attack.

Even when Barcelona were organized, this posed some threats. Barcelona wanted to defend in a 4-4-2 instead of a 4-3-3, probably in order to be able to help out better on the wings. This formation was seemingly compact when they kept Valencia in the centre of the pitch. 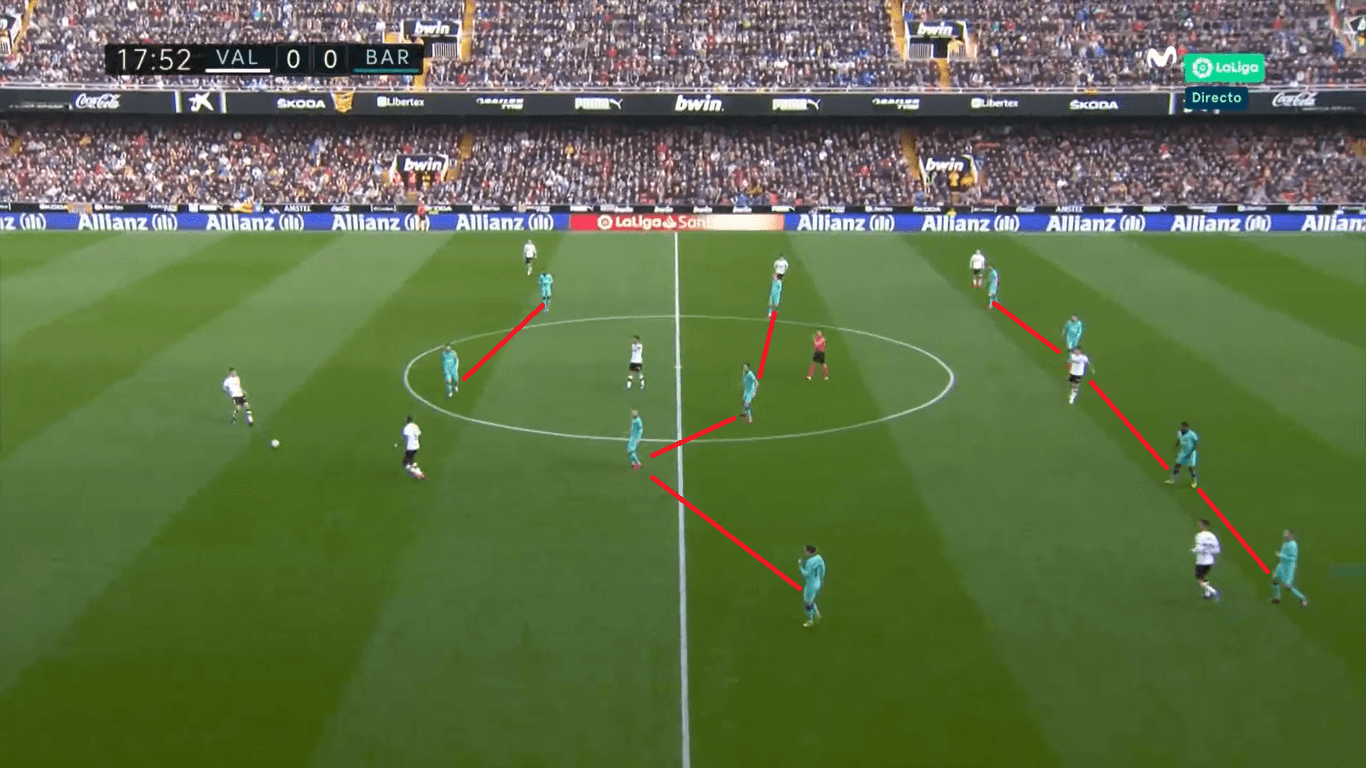 However, things were different when Valencia threatened to play a long ball. 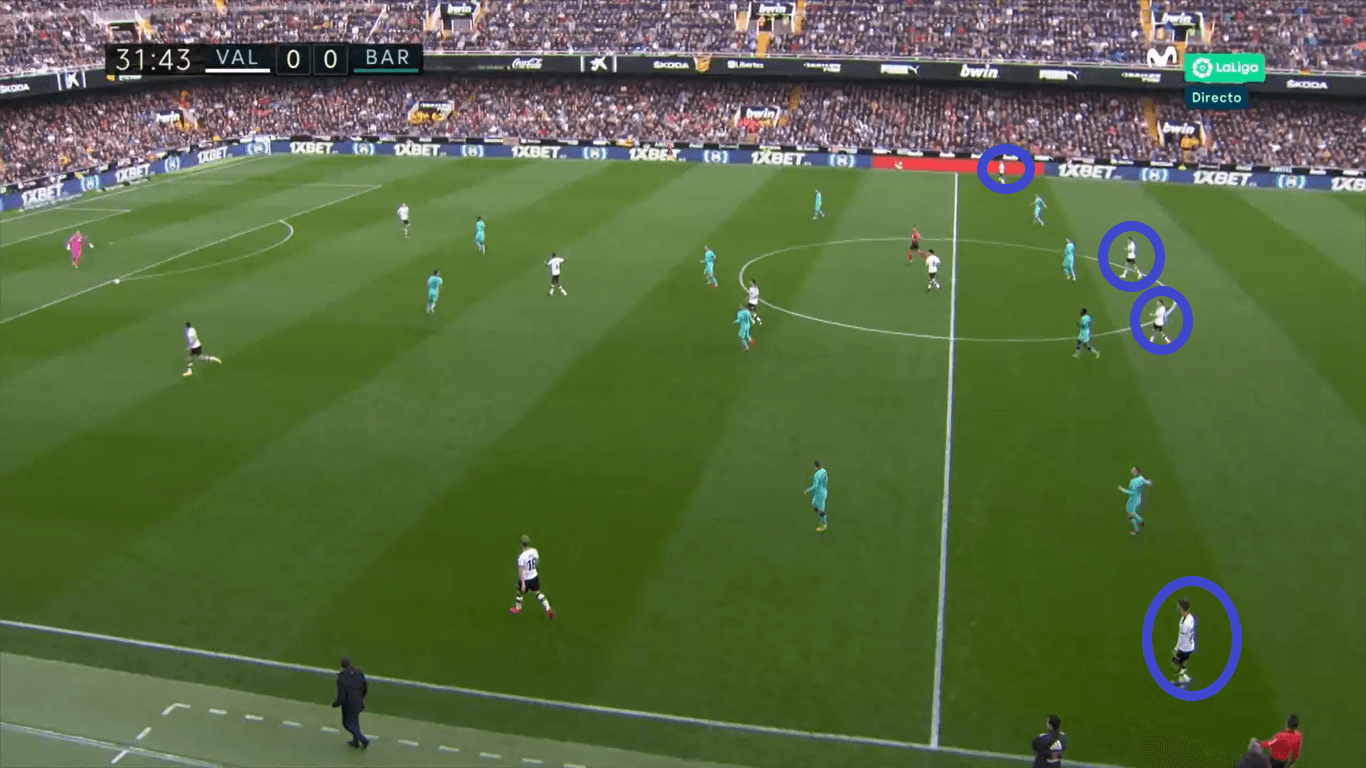 Here, even though Barcelona are positioned with a back-four in a 4-4-2, they have difficulties to defend the whole width of the pitch. As Valencia weren’t interested in having possession and dominating the midfield, they simply didn’t care that they had numerical inferiority in the centre. What mattered for them was that they had a four against four in the opponent’s half. With Barcelona’s back line staying so high up the pitch, it was no surprise that long ball were always dangerous. Barcelona didn’t defend too badly though, but in some situation it just wasn’t enough.

A great tactical clash between Valencia and Barcelona ended with a well-deserved 2-0 victory for the host. Barcelona had their ideas on how to score, but they weren’t able to play it through against a well-organized defensive machinery from Valencia. To create holes against such a compact defence, Barcelona should have circulated the ball somewhat faster. Additionally, Busquets and Messi played more human-like than alien-like, producing some turnovers and failed passes. Against defensively stable teams, Barcelona rely a lot on those two though, as quick combinations through the centre are vital for Setién’s system. To become more dangerous, Barcelona also need to include more vertical penetrations from their midfielders, which could result in Vidal getting more playing time than Arthur. Valencia on the other hand are very happy with the three points and can hope to fight for a Champions League spot.