Cardiff hosted Swansea in the South Wales derby with both teams battling for a place in the playoffs as they aim to gain promotion out of the EFL Championship. Swansea started the day a single point off sixth place with Cardiff four points further adrift.

This tactical analysis will deconstruct the tactics and identify why neither team was able to break the deadlock. Both teams played with a 4-2-3-1 formation in an effort to create balance between attack and defence. Swansea beat Cardiff in the first derby of the season. Both sides battled for space in a congested midfield with Swansea coming out on top with a 1-0 win thanks to Wilmot’s headed goal in the first half. 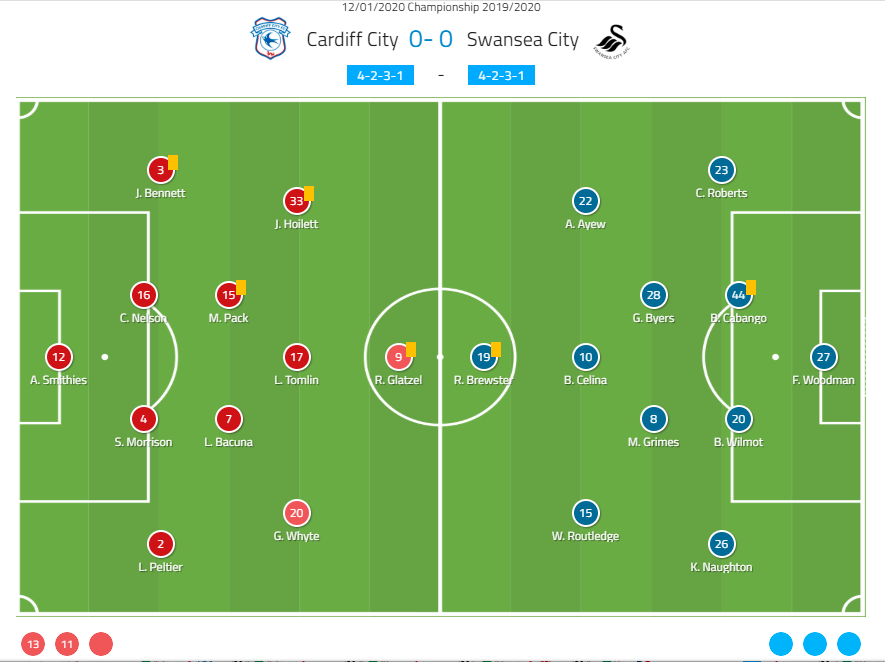 Cardiff made five changes with Harris recalling Peltier, Morrison, Bennett and Whyte to the starting eleven ahead of Flint, Richards, Bamba and Vaulks. Goalkeeper Neil Etheridge was dropped following transfer speculation with Alex Smithies starting between the posts.

Swansea gave a first start to Liverpool’s Rhian Brewster who arrived on loan earlier in the week. He started ahead of Baston. Celina was preferred in the centre of midfield behind Brewster with Cooper preferring youth over experience in those key areas. Wilmot was brought back into the centre of defence to provide solidity against Cardiff’s creative forward line.

Cardiff were dominant in the first 30 minutes having won the midfield battle. They used the ball well and manoeuvred Swansea around the field by utilising short passing and quick two-touch football. 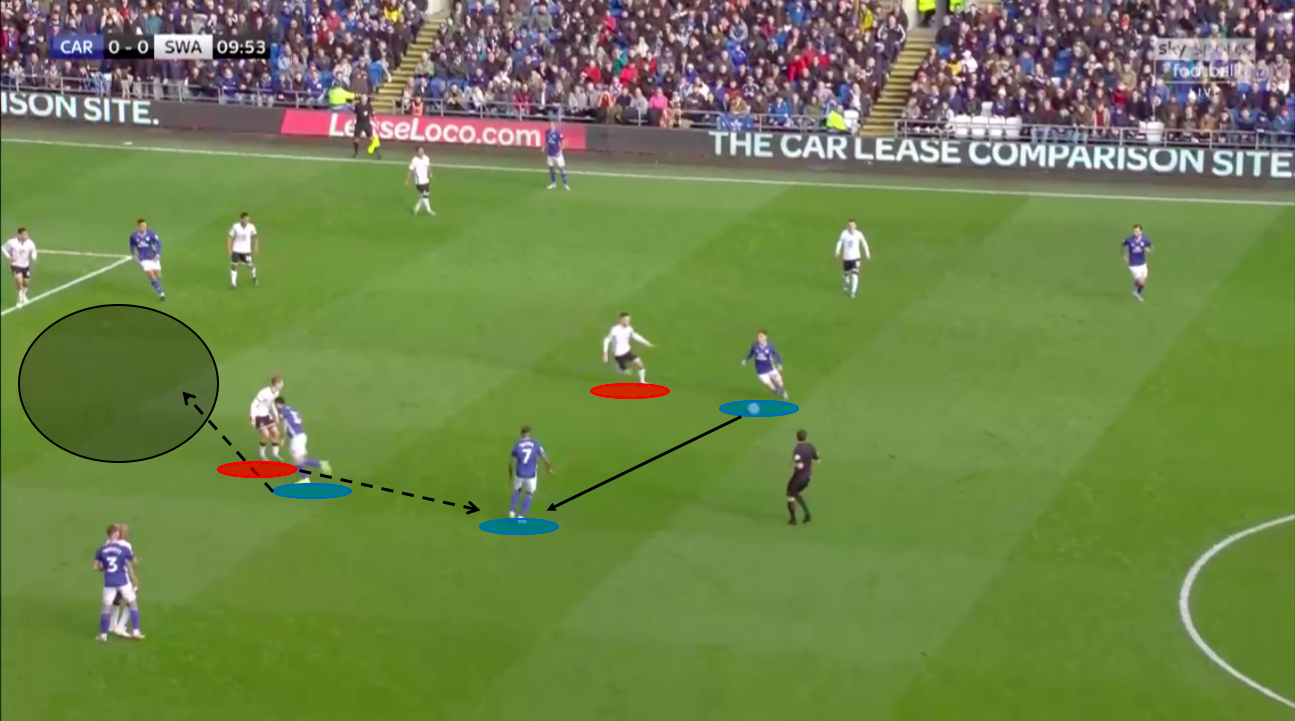 The graphic shows the space that can be created between the lines by committing the defender to the ball. Whyte’s run beyond the defensive midfielder means that defender is left with a decision to make. He either covers the zone or closes down the player in possession. As Bacuna receives the ball to feet, the space is created between the lines with four attacking players in dangerous positions. On this occasion, Bacuna was unable to thread the pass but it shown the tactics that Cardiff used to create space and beat the midfield.

By employing five players within the midfield, Cardiff were once again competing in a congested area of the field. They had to rely on width and quick movement of the ball in order to gain momentum. 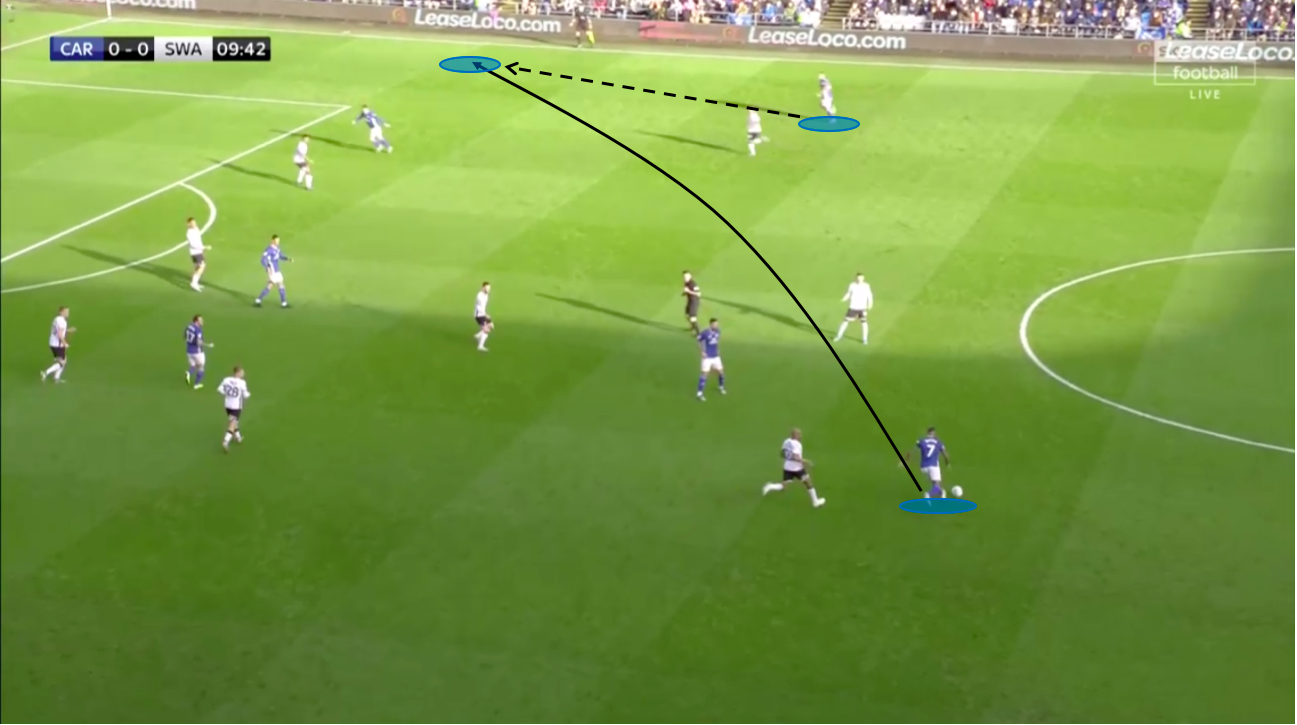 Bacuna pushes the ball wide using a well-weighted pass. As it is picked up, runners from the midfield crowd the box as they look to meet the cross. Swansea’s tactics focused on blocking the central channels of the midfield which allowed access on the flanks. The ball is closed down quickly and the cross isn’t forthcoming. This is typical of the opening exchanges with Cardiff unable to create chances from advanced positions on the field. Cooper was evidently frustrated by his team’s attacking output in the opening half-hour but would have been buoyed by an organised defensive display. 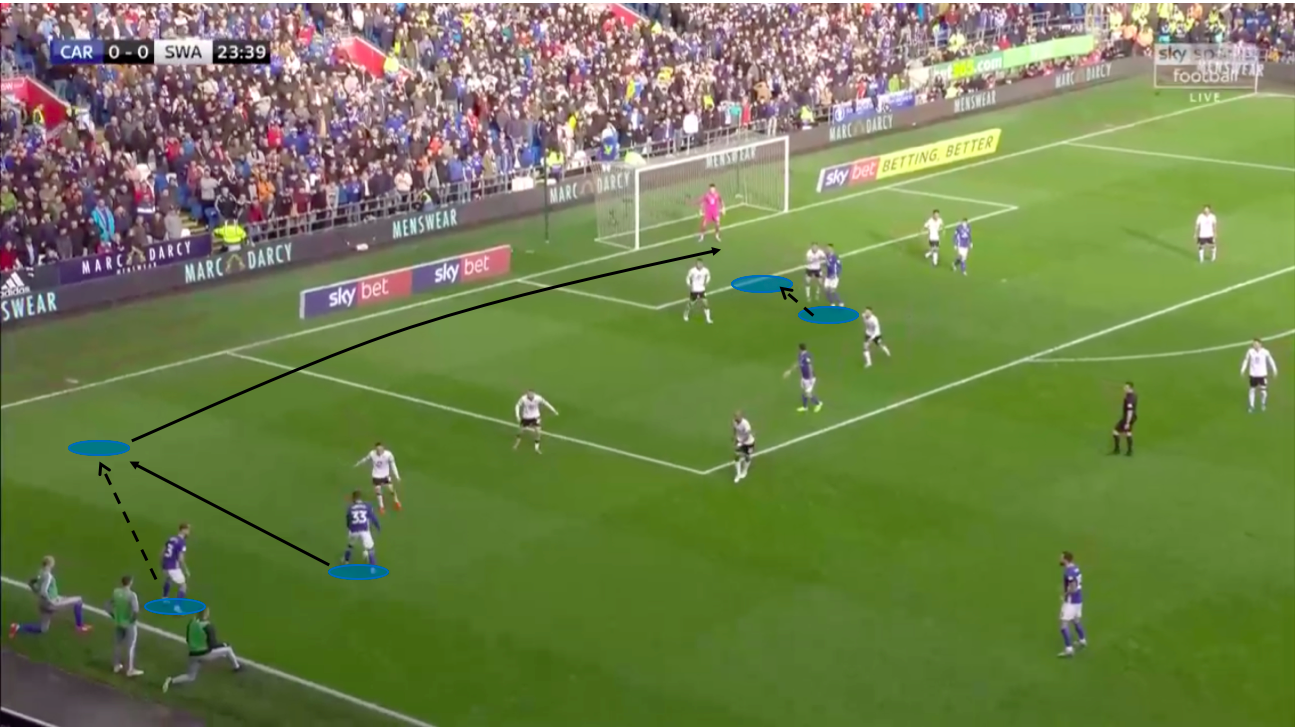 Joe Bennett performed well throughout and was a good option on the left flank. He was the driving force on the left and created numerous chances. His acceleration from a standing start creates the space for a good cross. Hoilett held the ball and committed the defender. Once he was committed, the ball went down the line for the cross. This was a rare example of defensive disorganisation on Swansea’s part. With enough white shirts in proximity, better commitment to defensive positioning would have nullified Bennett in this instance.

Swansea started to gain possession in the latter stages of the first half. It was clear that they intended to build play from deep areas in order to create space behind the offensive line. Cardiff committed their attacking four higher up the field during the transition from offence to defence. Swansea countered this by exploiting the open the areas that were created. 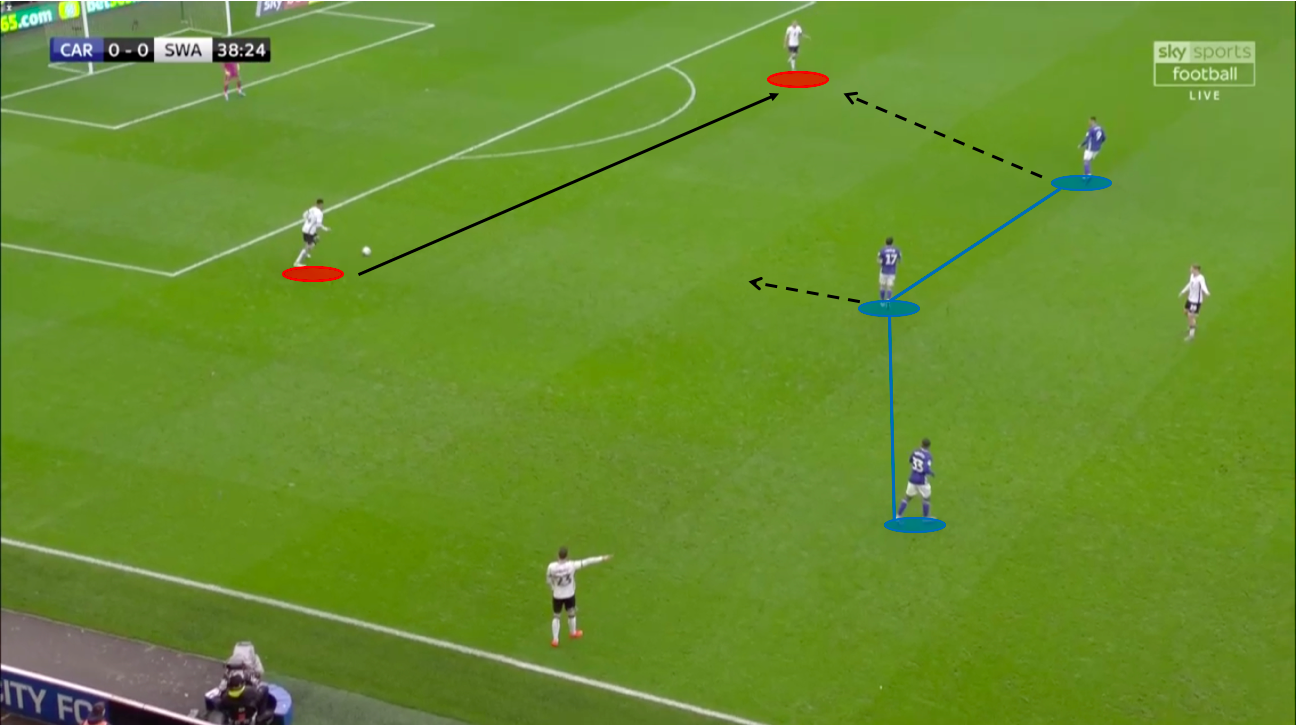 As the image shows, Swansea entice the Cardiff offence by playing along the backline. As the ball is passed to Wilmot, Glatzel closes the space quickly. Against a lesser player, this may have turned possession as the ball is cleared, however, Wilmot maintains possession and pushes the ball out wide. The defensive shuffling of the attacking line sees Hoilett moving with the ball and covering the central areas.

As Cardiff committed the forward line high up the field, they needed to close the space to the defensive line by committing them higher. Past the forward line, Swansea’s tactics used quick attacks. The best chance of the match fell to Celina who drove towards goal in the 28th minute. 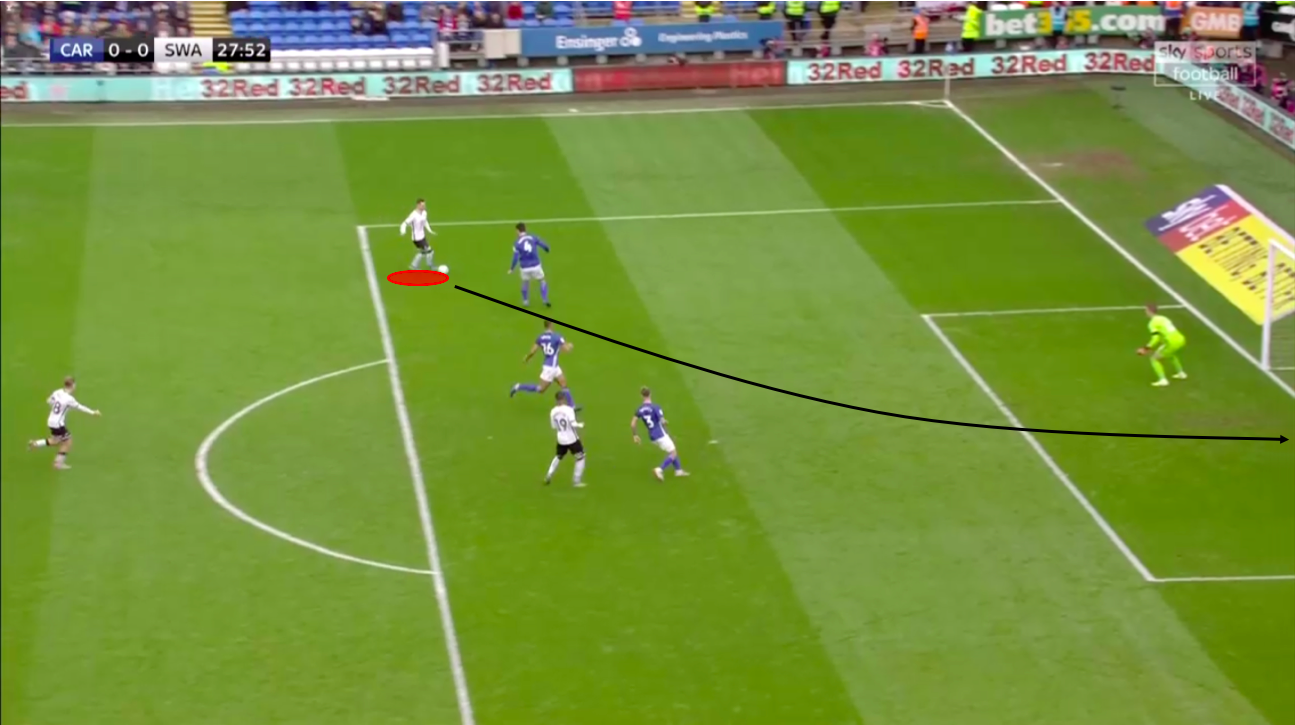 As Swansea drive towards goal, they committed numbers and had clear channels. Options were established both on the defensive line but also slightly deeper for a longer-ranged effort. As Celina drove towards goal, he opened up his chest and swept the ball onto his right foot for a driven strike that used the defender as a shield. Despite beating the keeper, Celina’s strike hit the post and rebounded back across goal. Celina’s footwork and pace were both equally impressive and provided a dangerous opportunity for the home team. It affirmed the manager’s faith in youth over experience and showed how he felt Swansea could outmanoeuvre Cardiff. With many in the crowd looking to Brewster to break the deadlock, Celina proved to be the more dangerous of the two.

In the first week of the transfer window, Rhian Brewster was the standout loan signing in the EFL Championship with a number of clubs chasing his signature. Steve Cooper coached Brewster in the England U17s setup making Swansea the ideal club to support his development in this six-month loan deal. With limited options for Brewster in the Liverpool first team, it should be a promising move for the 19-year-old.

In his first match for Swansea, Brewster had a mixed performance but proved his potential in abundance. A period of adjustment is required for an academy player to adjust to the physicality of the EFL Championship. Adjustment is also required for the wider team who operate a with a completely different set of offensive tactics. Brewster is a player who wants to run in behind and find space, not a player who wants to hold the ball up for running midfielders. Brewster spent much time with his back to goal rather than running in behind. 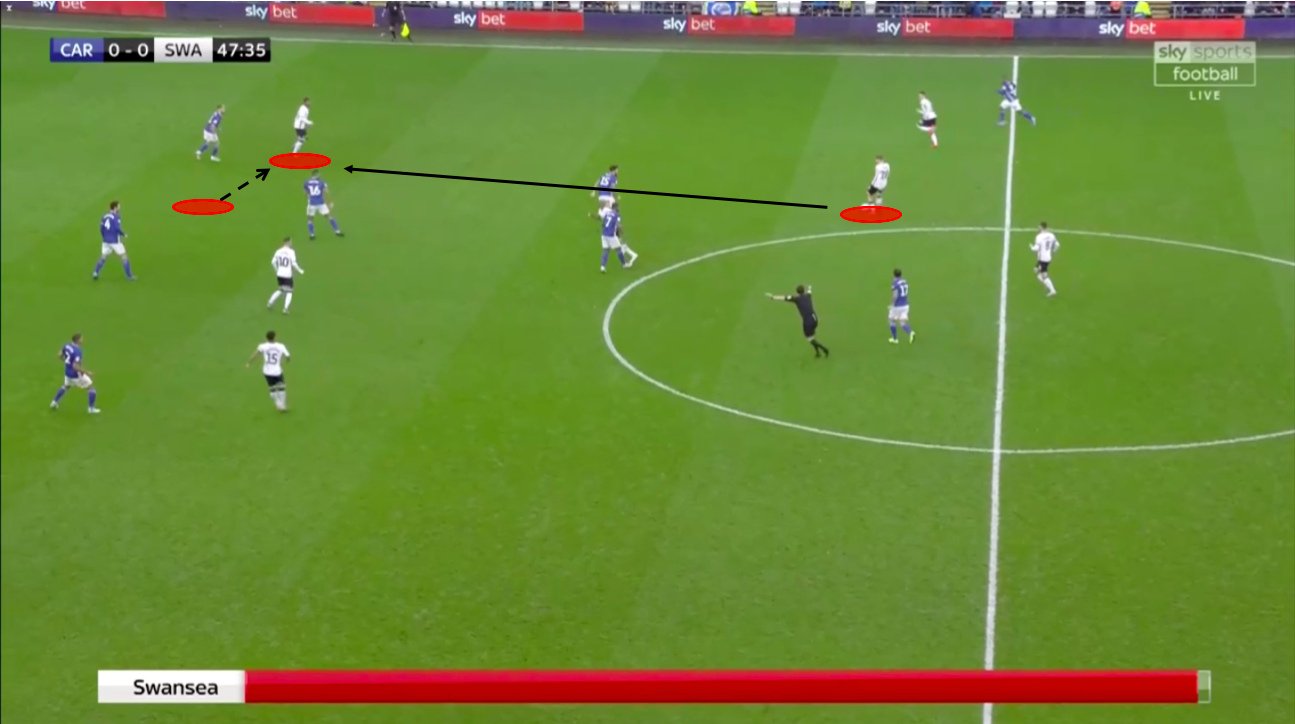 As Brewster drops to a wide area to collect the ball, he is working as a supporting forward and operating in a role which is unfamiliar to his offensive roles in other teams. He is isolated in this position and instead uses it as an opportunity for a long-distance shot with limited success. He would place more pressure on the defensive line by playing on the line and exploiting the space behind. Using the midfield in a wider role, would provide better service to Brewster and could have provided him with better scoring opportunities.

This tactical analysis concludes that this fixture was a battle of attrition with neither team able to come out on top. Cardiff were the more offensively minded team for large swathes of the match and utilised wide areas to much better effect. Their tactics provided a more dominant midfield that exploited Swansea’s tactical weaknesses but were still unable to create quality chances.

Despite sitting below Cardiff in the table, Swansea looked the better team with strong performances from both Cellina and Wilmott. Brewster looks a promising prospect for the season and could be the spark that ignites a promotion push.