Diego Demme 2019/20: What kind of player are Napoli getting?- scout report

Diego Demme completed a move to Napoli on Saturday, in a transfer which from the outside may look odd, with the player leaving the Bundesliga leaders RB Leipzig to join 11th placed Napoli. In reality, this move was a “childhood dream” for Demme, whose father was Italian and named his son after Diego Maradona, the Neopolitan great. In this tactical analysis, we will look at the skillset of Demme and look at what kind of player Napoli are getting.

We can see below some of the main strengths of Demme, with his impressive stats clearly being his long passes per 90 and passes into the final third per 90. His key pass stats are low, averaging 0.21 per 90 and this combined with his passes into the final third stats help to paint the player in possession. Demme is a tidy, efficient player in possession, who is comfortable on the ball but not exceptional. His strengths don’t rely on smart passes that break presses, but instead, Demme is a good role player who is intelligent enough to receive in difficult situations, where he progresses the ball with simple, short passes. As a result of this lack of offensive creativity, his assists total is harmed, with no assists recorded this season and only an xA total of 0.7.

As a result of his playing style and Leipzig’s system, Demme ranks 4th in the Bundesliga for total passes, 25th for through passes and 18th for progressive passes. Therefore, he’s a useful player in the build-up who is comfortable receiving and progressing the ball, but he’s not a deep-lying playmaker and wouldn’t be my first option as a pivot for a side looking to control possession and build through the pivot. A tool he does have which can cause the opposition immediate danger is his long passing, where he has attempted 85 long passes at a 65% success rate, which are solid numbers. 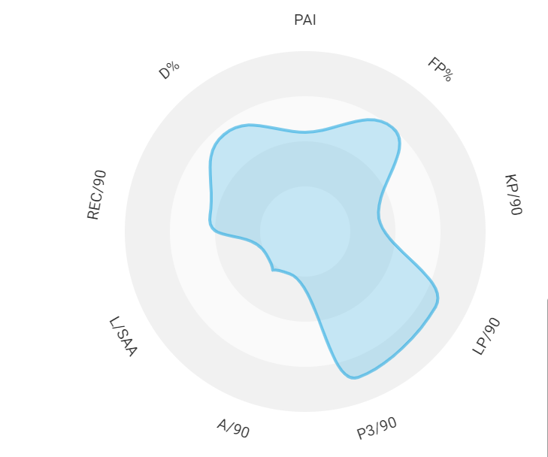 Defensively, his duels won percentage of 51% is decent but should maybe he higher as it is slightly tainted, which I will move onto in the tactical analysis section. His aerial duels percentage of 39.1% isn’t great, but it’s understandable when you consider he is 1.7m tall.

Similarly below, Demme drops to receive, possibly looking to receive a third pass from the other central midfielder who drops near to him. Demme receives the ball and is able to turn out and progress play.

Demme has an ability to progress play with short quick passes up the pitch, as we can see below where he squeezes a pass through a tight Dortmund press. These quick, short combinations allow Leipzig to progress up the pitch quickly but less directly.

As mentioned he is also capable of progressing play much more directly with his long passing. Again here we see him take up a good position between two players, with him capable of receiving the ball if a slightly risky pass is played. To prepare for potentially receiving the ball, he scans twice with two quick checks of the shoulder, but in the end Leipzig go long.

Demme then quickly shows his speed of thought and spots Timo Werner looking to run in behind, and plays a first-time pass in behind which Werner gets a 1v1 with the goalkeeper from.

Here, Augbsurg apply no direct pressure to Demme from the front, and are extremely vertically compact. Therefore, Demme can play a long pass over Augsburg and find Yussuf Poulsen, who should do better with his chance. I wouldn’t say Demme is an elite long passer, but it’s a useful tool he possesses which can unlock compact teams at times.

Demme is an excellent presser of the ball, but what actually makes a good presser?

Pressers should have all of these attributes, as Demme does.

1. Aggression and hunger to win the ball.

4. Correct intensity and direction of the pressing run

In the below examples we will demonstrate Demme showing these abilities.

In this first example we can see Demme’s aggression off the ball and the intensity of his run. Demme remains tight to the player he is pressing from behind but never overdoes it, and keeps the intensity of his run as high as it can be while still allowing himself to slow down and turn if needed (around 80-90%) depending on the speed of the player. This means opponents can’t turn Demme and progress up the pitch.

We can see again Demme’s ability below, with him slowing down and not allowing the ball carrier to turn or exploit any space or passing lanes. Furthermore, we see another of Demme’s strengths-  using his body well in order to win the ball back and cut passing lanes simultaneously. Demme is committed to winning the ball back, and is aware of his body positioning and how it can influence passing lanes. For example here, Demme recognises the ball is slightly out of Sancho’s feet, and so leans in with his foot while keeping small and is able to poke the ball. This ability is helped by his height, due to a low centre of gravity.

We can see another example of this here, with Demme outstretching but not allowing the ball through his legs by staying low, while recognising the passing lane inside. Demme commits at the right times and does it with the right body positioning, and is able to do so by reading the game.

In this final example, Demme recognises the space in behind him and so gets closer to the ball carrier in order to close off the angle as much as possible. He then uses his body to block the passing lane and block the pass, stopping the Paderborn attack. An ability to commit and win challenges is an important part of a defensive midfielder’s role, and the use of the body in order to win the ball shouldn’t be overlooked. Cutting passing lanes can look awkward and requires commitment, and despite not having the largest frame or the longest legs Demme still does a good job.

As mentioned earlier, I wouldn’t use Demme as a single pivot in a possession-based side who expect to be pressed and use the pivot to build-up. The main reason for this is Demme’s inconsistent press resistance and his limited creativity. Napoli have used a single pivot often under Gattuso so far this season, but Demme’s limited creativity could mean that Napoli struggle to build when under intense pressure if he is relied upon. Demme could drop to become a part of a back three to replicate Gattuso’s tactics at AC Milan when in possession, as this is something he did at Leipzig under Nagelsmann, but Napoli shouldn’t rely on Demme as a deep-lying playmaker who will play genius passes through presses.

His size can make him a target in aerial duels, but Demme needs to learn to use his body better in these duels and effectively buy fouls, as he is likely to be outmuscled often and if clever can bend this into a foul.

Demme is the kind of player I really do enjoy watching, as he is a player whose decision making and speed of thought is excellent, as this scout report has hopefully shown. Developing players like this can often run the risk of technical ability been slightly worsened, and Demme is probably a good example of this, which you can see as a good or bad thing depending on your outlook on football. Napoli are getting an extremely hard-working, aggressive player who progresses the ball well and who has performed his role excellently in Leipzig, and he will be hoping he can continue in Naples under one of his idol’s Gennaro Gattuso.